Yep.  I am way behind.  But that is A-OK!  I am going to just keep on trucking.  When my kids are grown, and they want to see the diary I kept for them, this is it.  They won't care that I was about three weeks behind with my details!!

So, let's go all the way back to kindergarten graduation day! 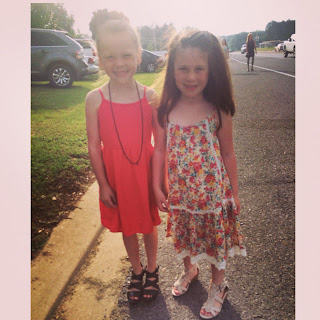 School was officially out for the girls, so it was sweet of Ellie Sue to get up bright and early to come with me and her daddy to celebrate Gabbi's special day. 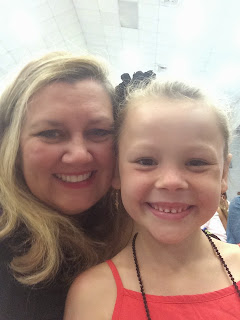 Yes.  If you've been following the blog for any length of time, you might recall a kindergarten graduation day for Gabs last year too.  You know... she hardly EVER even mentions being in kindergarten twice.  You know those kids who say, "Im in first, but I should be in second"?  Well, it might happen someday, but for now, Gabs doesn't even seem to recall that she had this same occurrence last year. 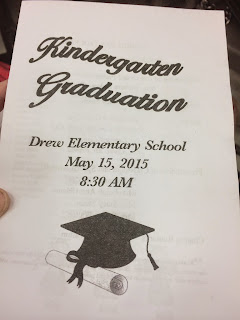 She was just pleased as punch to be doing it again this year! 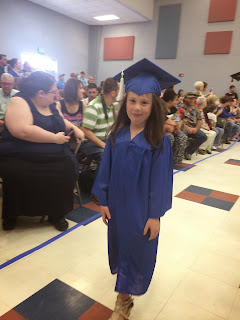 Look at that cutie patootie. 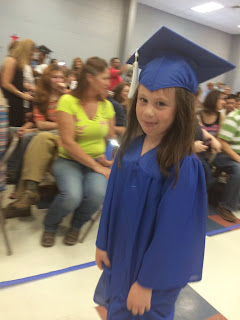 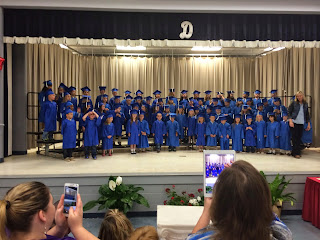 I'll tell ya, I don't recall them singing and doing all the hand motions and such that I saw them do this year.  It was pretty precious. 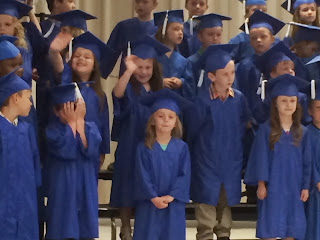 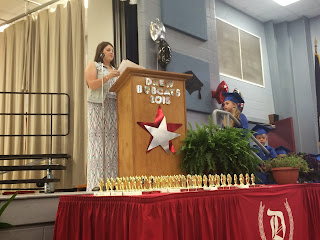 Gabbi had a super sweet teacher, who only recently began her career, and we loved her dearly.  She loved Gabs, and would you believe my angel baby made STRAIGHT A's?! 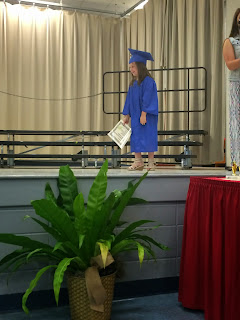 As I suspected when I made the decision to hold her back, it did LOADS for her self esteem. 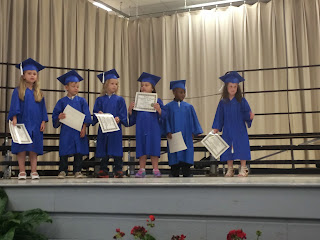 On the contrary, even if we'd finished up in first grade, KNOWING that we'd be repeating first, which would've been the case, she would have experienced exactly the opposite, with a drop in self esteem and a whole bunch of frustration along the way, I am afraid. 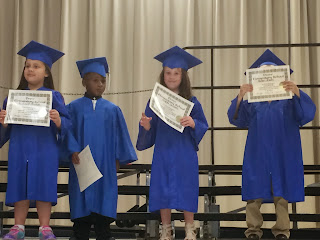 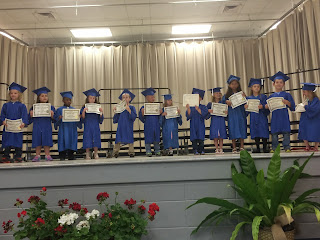 Gabs also got a trophy for the at home reading program. 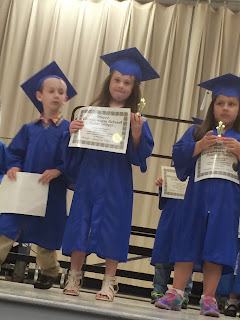 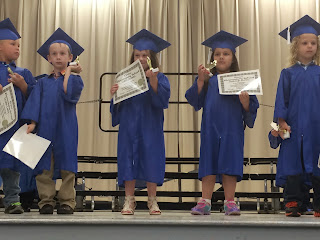 I love this picture of the proud graduate!! 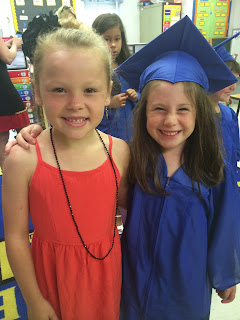 DeeDee and JinJIn both made the ceremony. 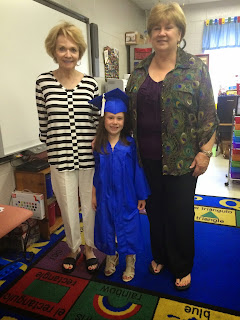 DeeDee was our after school help this past year, and well, let's just say she has decided to enter retirement!  ha.  It's a lot of work to keep up with this little diva and her equally diva-esque sister and their schedules.  We are grateful they had this special time with DeeDee this year though. 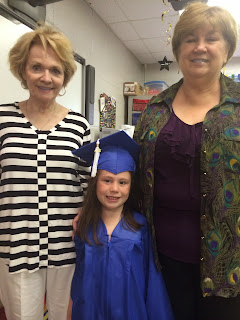 Mom and Dad were certainly proud of their youngest! 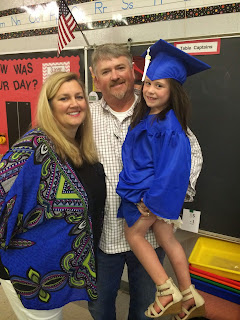 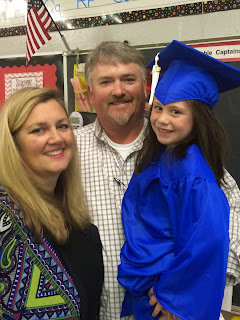 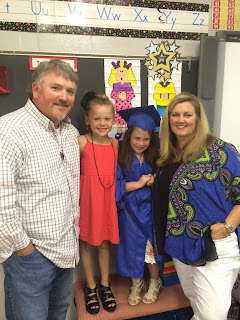 Both of the girls HAD to wear their high heels to this major life event.  I have come to a point, where I just give up the fight.  High heels?  sure.  Lipstick?  why not. 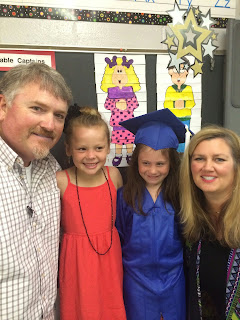 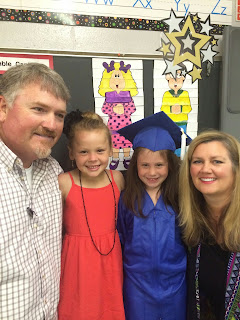 This little girl had quite the struggle last year.  She started kindergarten with a late August birthday, so she was actually only four.  I might should've considered pre k.  Rather, I sent her on.  She has been in Occupational Therapy since she was about 9 months old.  Most people don't know that.  They help her with her fine motor skills, which affect things like her handwriting, being able to brush her teeth, button her pants, zip her coat, and any sort of lacing or stringing art project.  She has come a long way, but we still need to address tying those dang shoes.  She's starting to get frustrated about it, so I guess it's time.  OT has greatly helped in the way of handwriting.  Also, crossing midline which improves brain maturation, so overall cognitive processing is better as well. 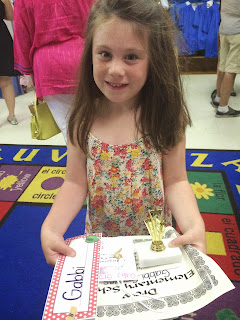 Yep.  I think she is ready for the first grade! 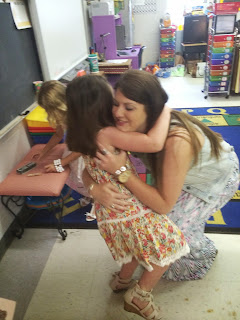 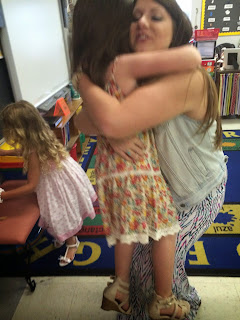 I'm grateful for an encourager as her teacher this year! 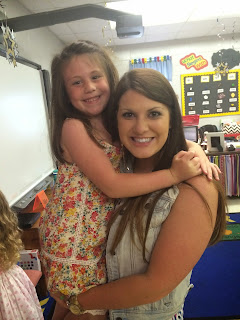 It is just as easy to fill someone's bucket as it is to dip from it!!  I appreciate people who fill my kids UP with positive words, love, encouragement, and hope. 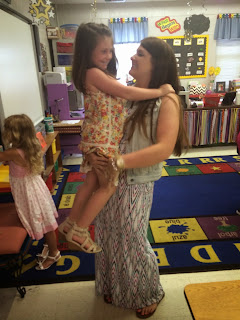 We owe that to all kids!

Yay for gabs!! My kids are two years apart and that was good for them in school. It sucks when they are both in college at the same time lol lol

I love your girls fashion style. They make their own path instead of following others!

Gabs looked adorable and very pleased with her little self! You go Gabbi! Thank you for reminding us that we owe our kids the very best and any sacrifice is not too much when it comes to their well being. She will do great in 1st grade. Looking forward to traveling on that journey with her and with big sis, Ellie!

Don't worry about those laces, she will get them eventually just like Shelbi Mae did. They both have come so far thanks to the wonderful peeps at MMPT! I love how we have been able to see her personality develop this year through all the pictures. And don't worry one bit about holding her back. Because Shelbi is now a year older than others in her class, she has developed a natural ability to be a leader when needed and also tends to be the first one to help those in need....I know this will be Gabs too!

#kindegartenhighheels Too dang cute (and funny)!

Congratulations to Sweet Gabbi! I love how their school celebrates everything big time! It's a feel good for kids and parents! I love seeing your little family! Having been around since the Caringbridge days, it's amazing to watch them grow!

Way to go Gabbi! Those are some of the best family pictures I have seen of you all & I love the one of Elle and Gabbi together

Kindergarten school in india are an extension for your child's quality learning experience that begins with our kids play school and Nursery programs and aims at preparing kids for a successful career.

My husband and myself have spent time at the Phoenix kindergarten, while class was in session, and more than approve of the way they handle the children. My son comes home singing songs, is easier to direct at home, (i.e. cleans up his toys without fuss, etc.,.) and is always asking when he may go back to school.