I LIVE IN HIGH FAVOR!

Hey!  Have you seen my new tees?!  I am in love with them.  They turned out just right!!  Of course, our mission statement is "Joyfully Use your Gifts to Brighten the Lives of Others".  So that one was just a no-brainer.  And because I am asked all the time, "Why does all that kind of good stuff always happen to you" (I'm paraphrasing)... and I ALWAYS respond, "I live in high favor!", I had to also design a tee that said that!!  They should be on the mojoystudio.com website in about two days.  Maybe even as early as tomorrow.  Depend son how quickly Suzy recuperates from the weekend's events. 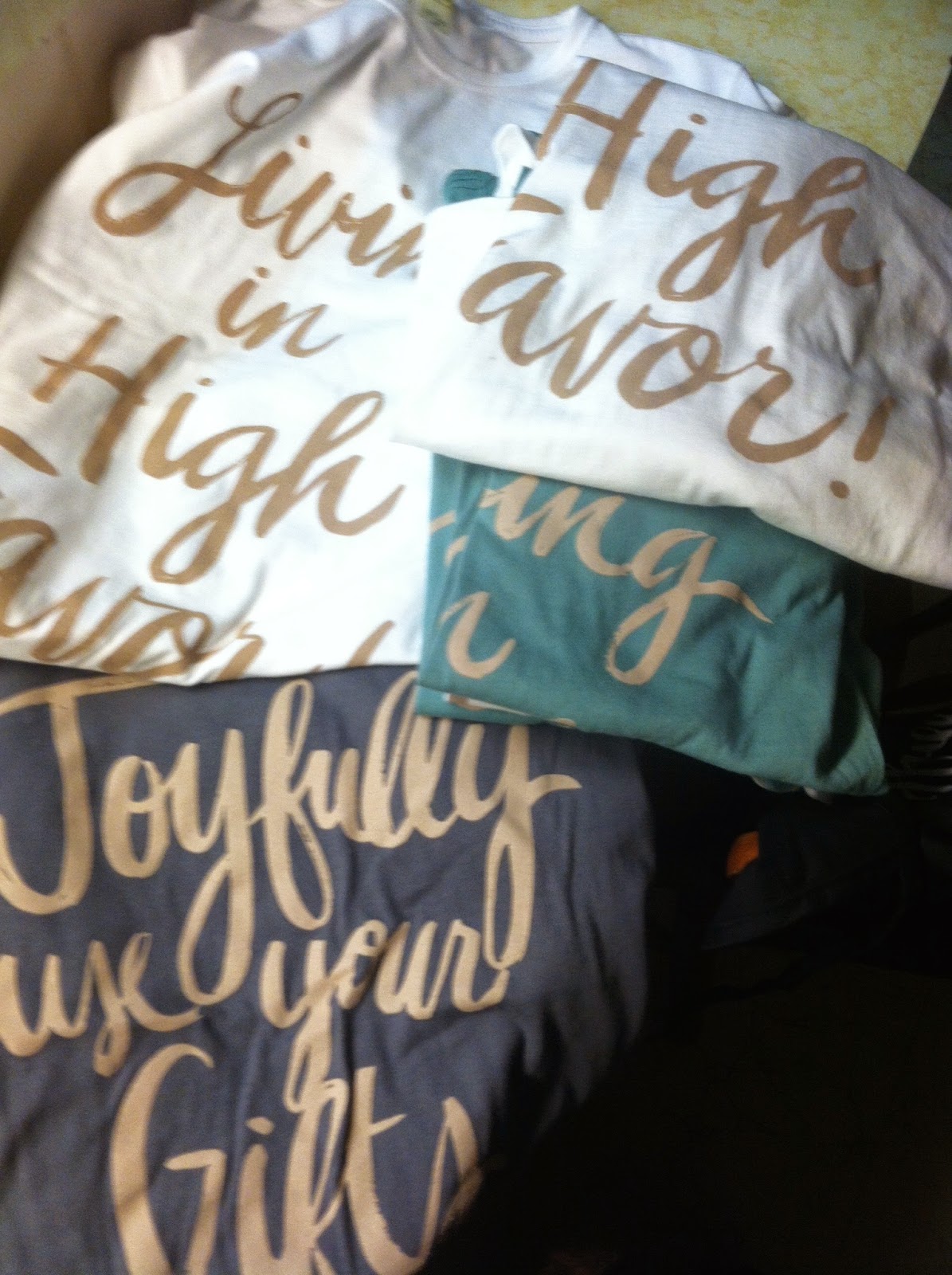 So, let me give you an example of "living in high favor"! 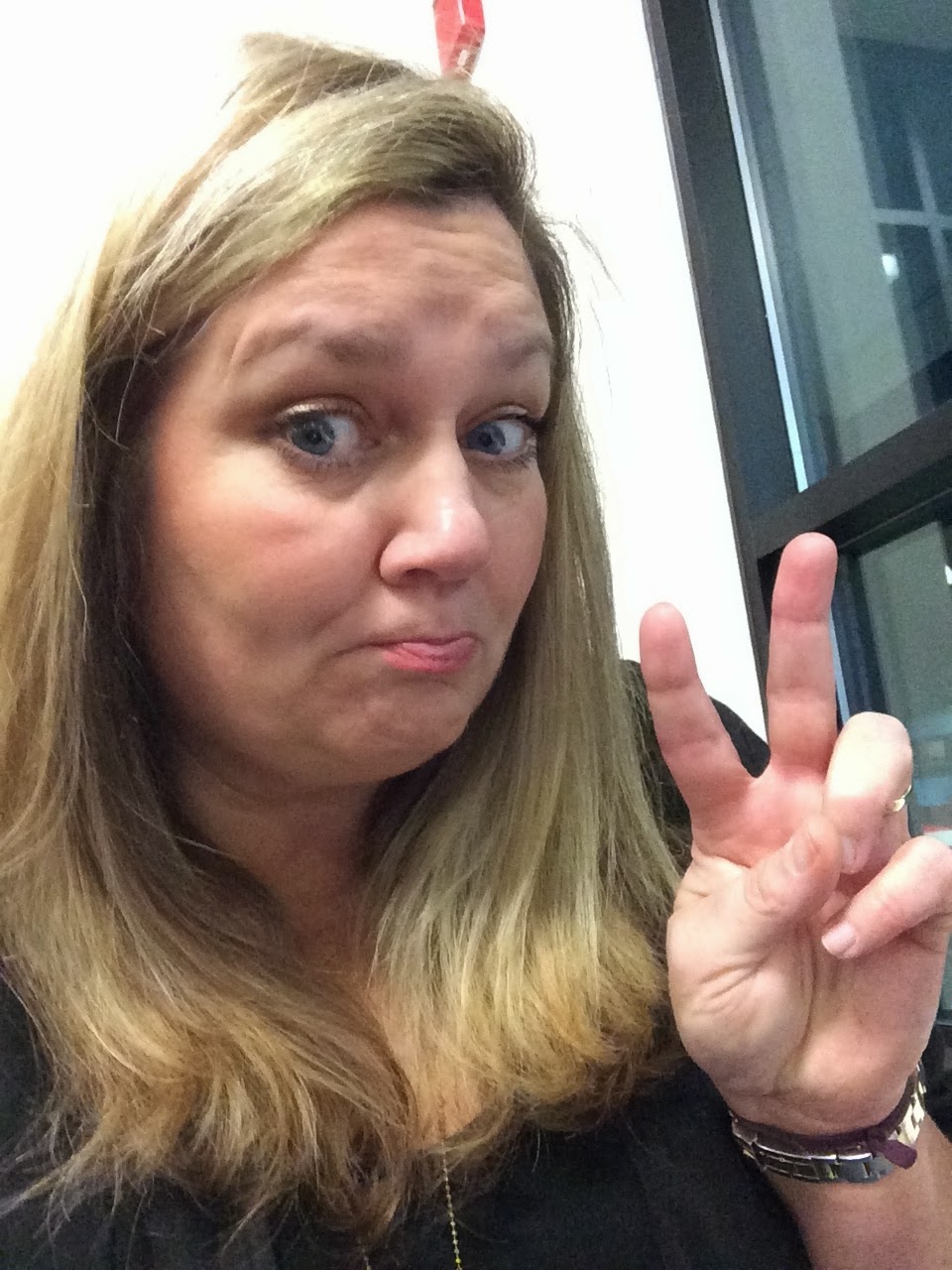 As you probably know, I went to Tucson last week to the bead show.  And because of a sudden family emergency, Jessi couldn't go with me this year.  Soooo... off I went on an adventure all by myself.  This is a rare thing. I like people.  I like meeting people.  I like sharing my time with people. I like traveling with people.  I didn't know exactly how this would go down, but I trusted it would work out just perfectly!  After all, I live in high favor! 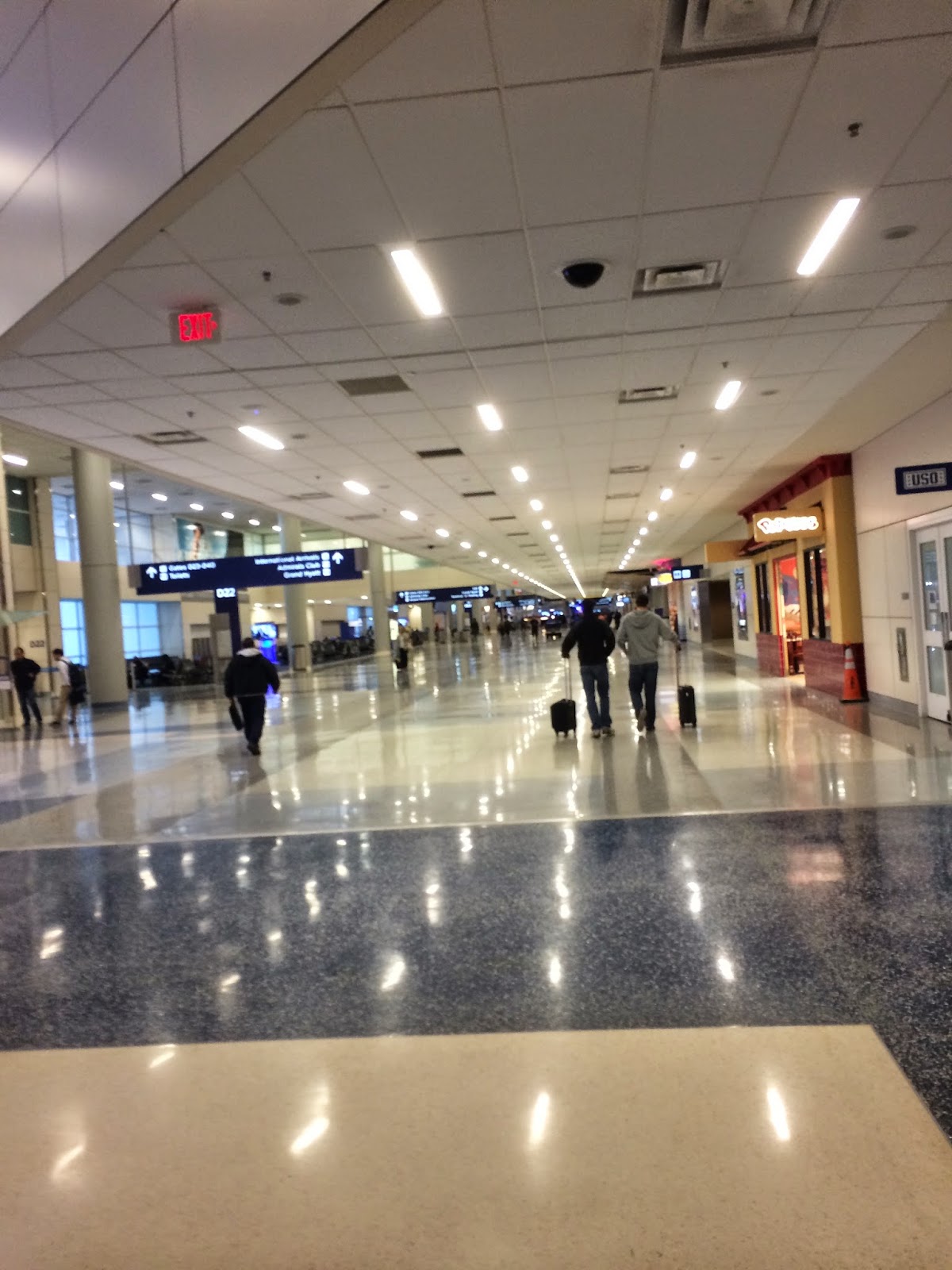 For instance, immediately across from my gate was this!!!  I was in desperate need of some of their DELISH coffee. 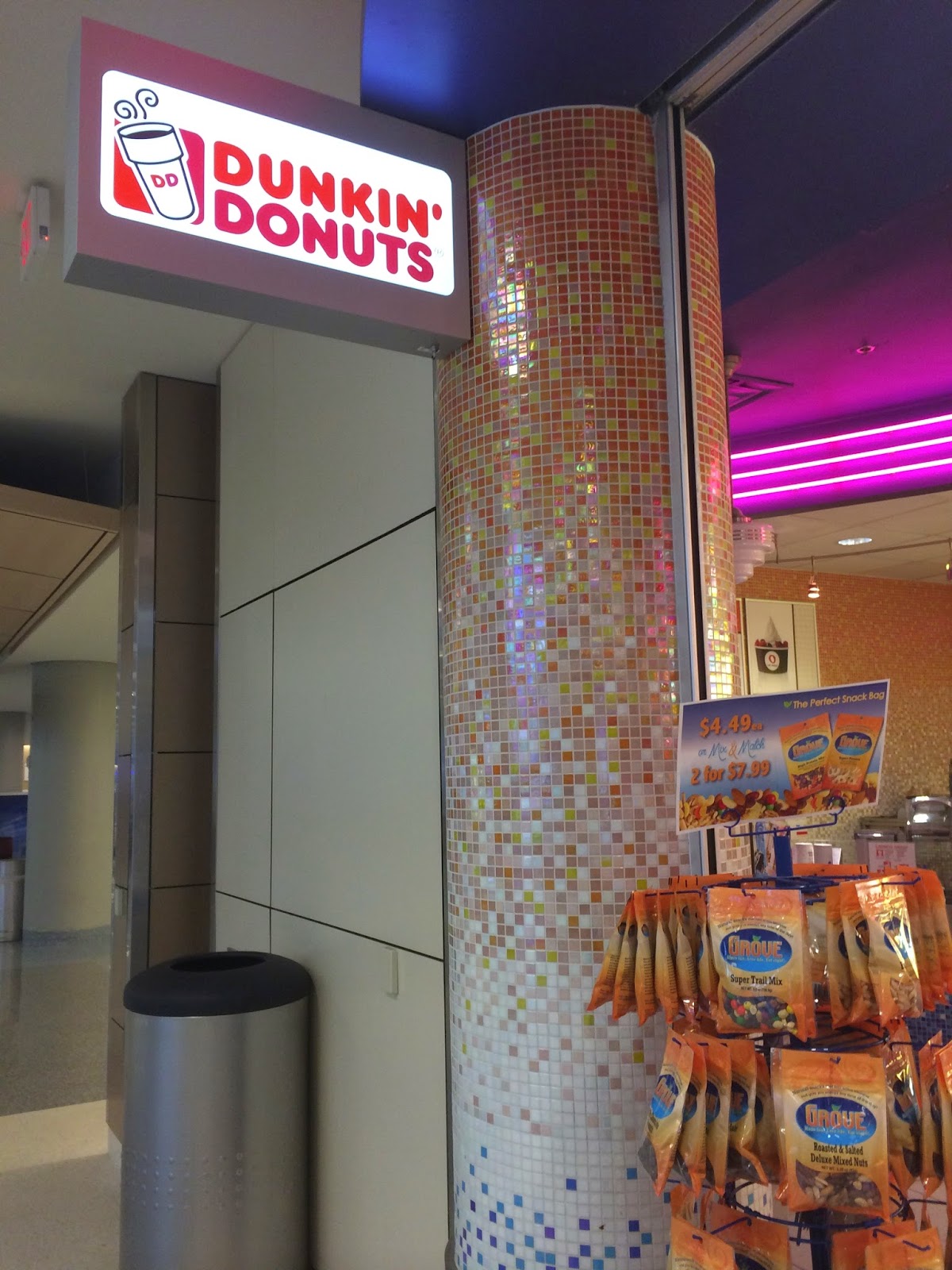 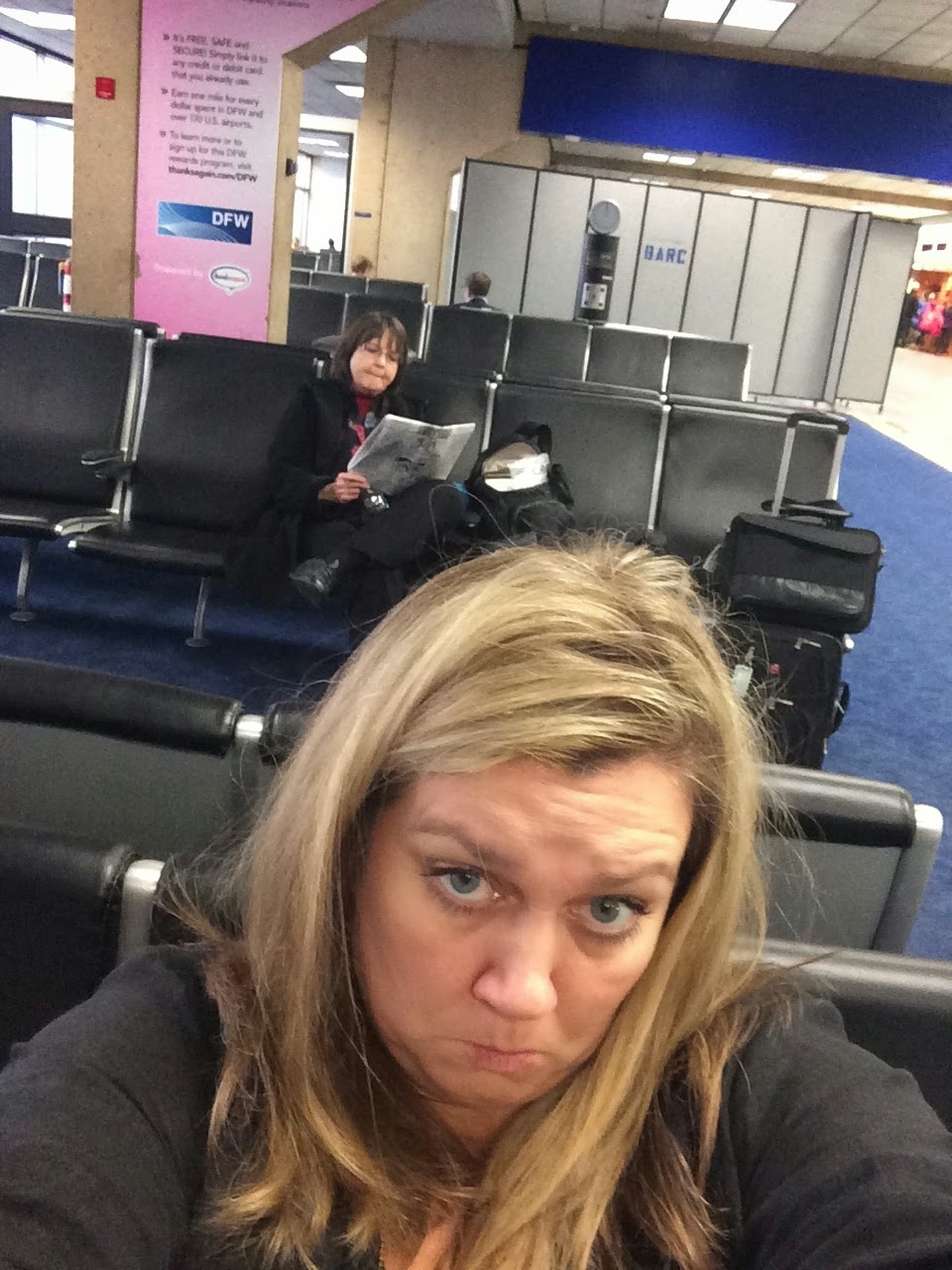 I was at my gate 2 hours early, because, well, there aren't just TONS of options out of Monroe, LA!  So, there I was.
I went up to the ticket guy, Tom, and asked him if there were any better seat options on the plane as I was on the LAST ROW.  Not that sitting right next to the bathroom in a totally packed plane squeezed up against a window isn't great, but you know... if I could change, I certainly wanted to.  And if I'm just being honest, I BELIEVED I would get a better seat!!

Tom explained that this was a FULL PLANE cause  it was headed to Arizona, and the Superbowl had people from all over the country flying into Tucson and driving down to Phoenix.  (or up or sideways or whatever?!)  Sooooo... I told him, I really liked the numbers on his tag.  He apparently started his job with the airline on 11/11/2014.  (also an 11.... just add it up).  I gave him the very abbreviated version of my history with that number, and how I'd always remained connected, spiritually, to my nephew, Jake, with that number.

Because I can come across as a bit of a weirdo without adequate explanation, I told him that when Jake died, and I started getting the 11's, I asked my pastor about numerology, and he assured me that numerology was strong, even in the Bible, and as long as I don't let numbers lead my entire life, then, it'd be fine for me to look into it and understand it more.  Of course, many of you know the story...but for those who  don't, I was waking up in the middle of the night at 2:11.  Then again at 3:11.  And 4:11.  etc.  It became eerily obvious that this was some sort of message to me.

And so, when I finally DID look it up, the first site I went to said that the number 11 is the way the "afterlife communicates with the present life" or something along those lines.  Well, let's just say that was ENOUGH for me!  I knew it was Jake.  And to this day, I STILL know it!

So, I shared this with Tom.  And I told him that what I'd really appreciate was getting moved up to a better seat, specifically Row 11!  ha  He said, that it'd be highly doubtful, but he'd keep me in mind. 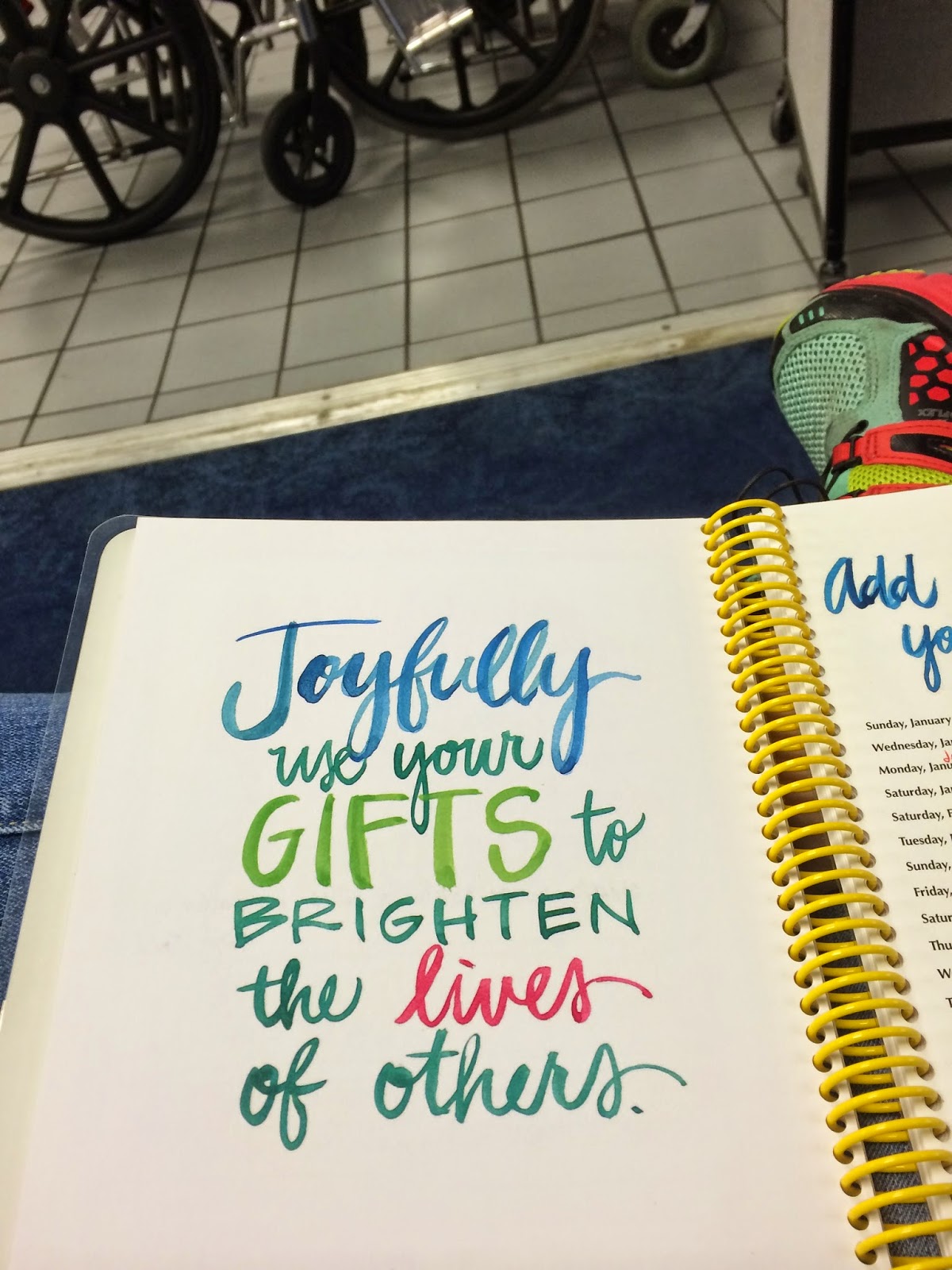 I sat back down and started filling out my planner. ( I am still not finished with it, so if you got one and are not caught up, no big deal!!)  Anyhoo, since I am a WOOer (IF you know me, you know I am intrigued with strengths, the gallup test, and WOO is my number one!  It means I really like to connect with people, and get to know them... as well as sharing stories about myself with them... haha... you know, like a blogger or something! ), I was constantly texting back and forth to my office staff while I sat here by myself.  Thus the selfies in the mix. 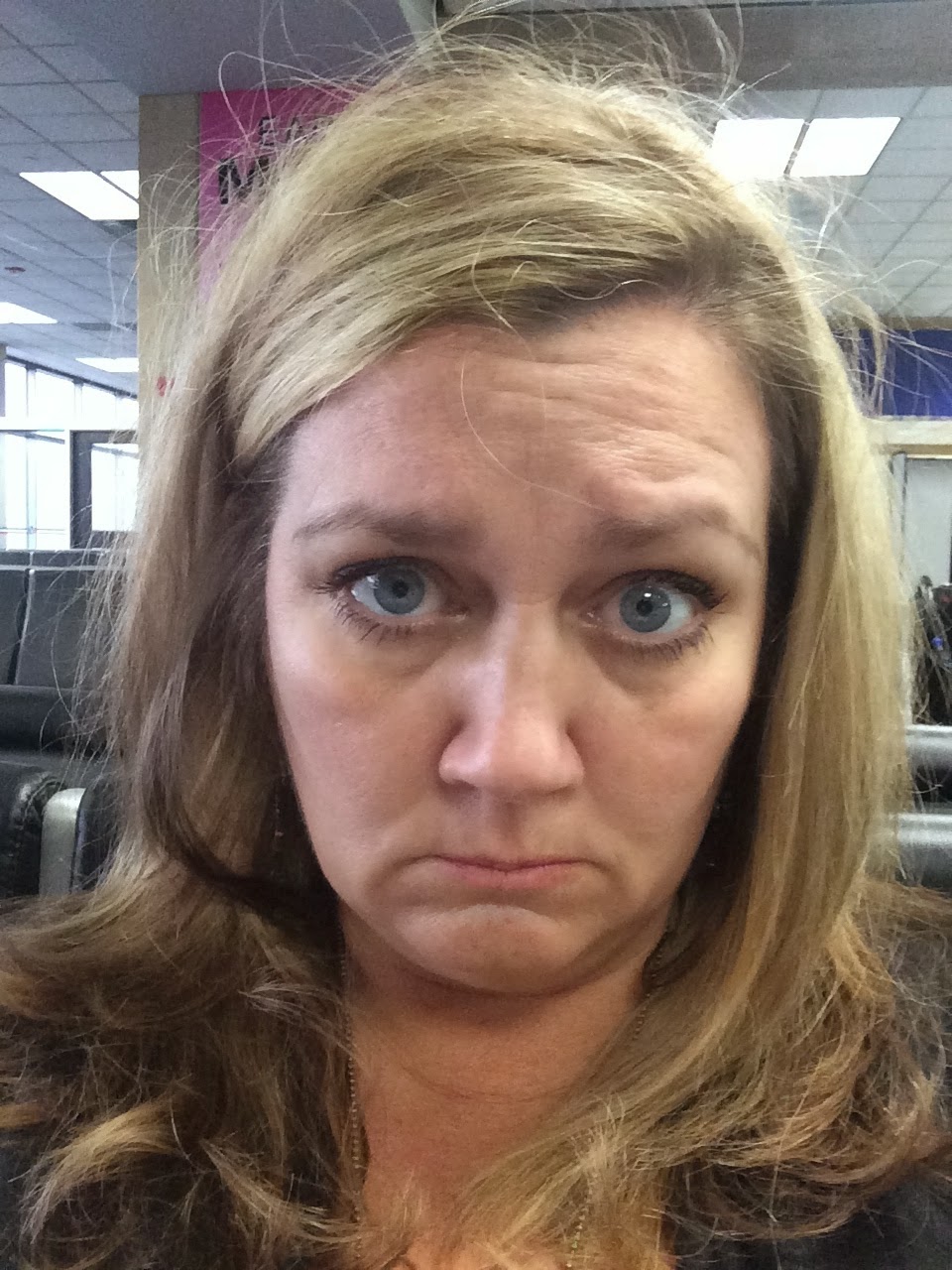 I was having neck pain, and I sent this to my neck therapist and told her I felt a lot like this dude! 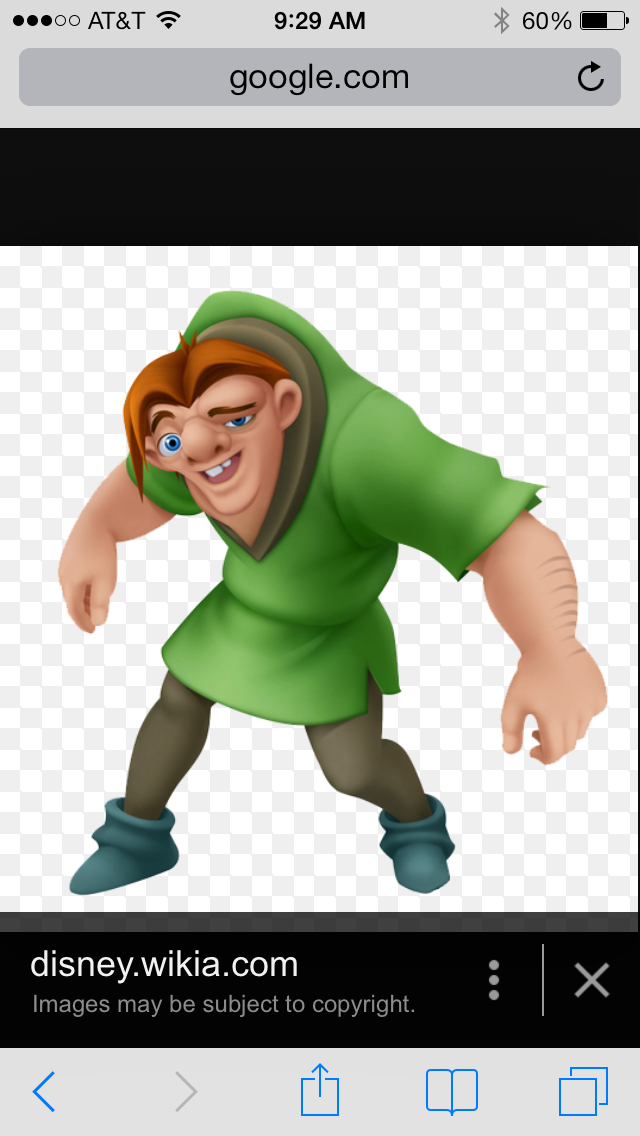 And then I sent Jessi a pic and said, "You should be here".  ANOTHER reason I don't have my planner done.  (There are 34 strengths in the strengths test, and FOCUS is in my number 25 !!  That's why I get so off course when trying to tell a story.... you know, like THIS one!) 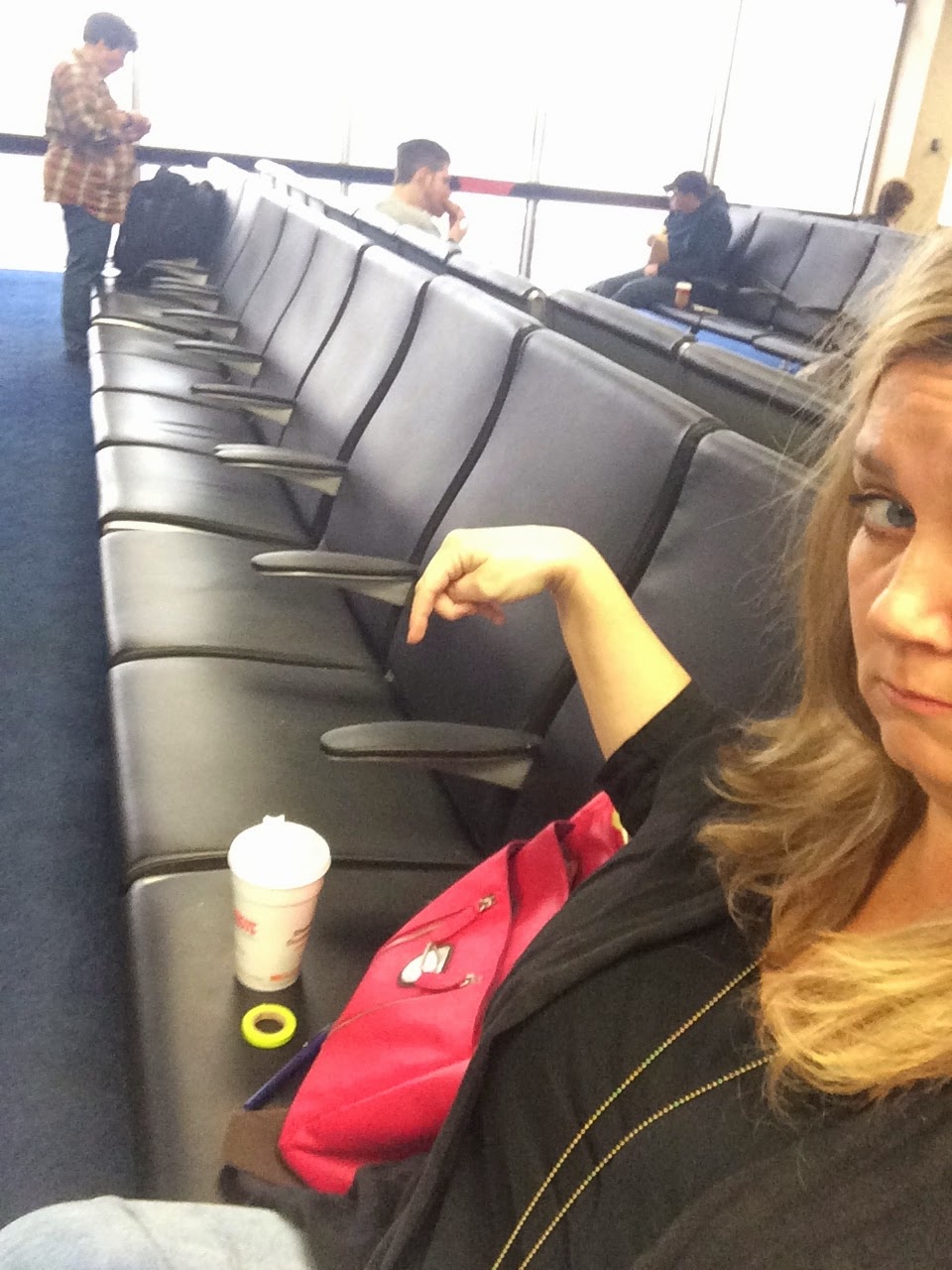 Ok, so by now, I was COLD and had to go and buy myself a sweatshirt that Todd wants me to go ahead and donate to Goodwill! 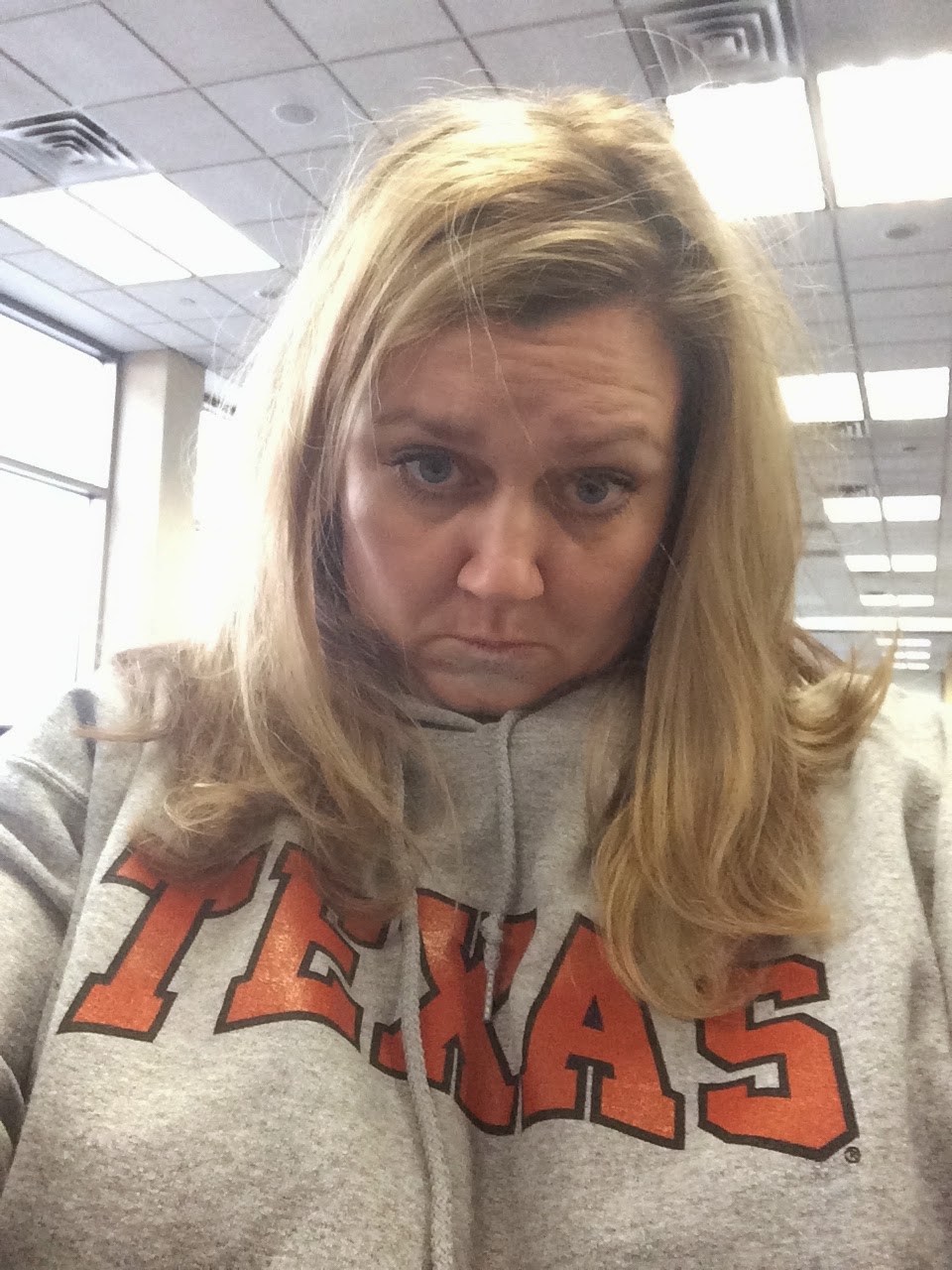 ANd I sent one more pic to Becky at work telling her, "No, don't worry about me.  I'm doing fine!" 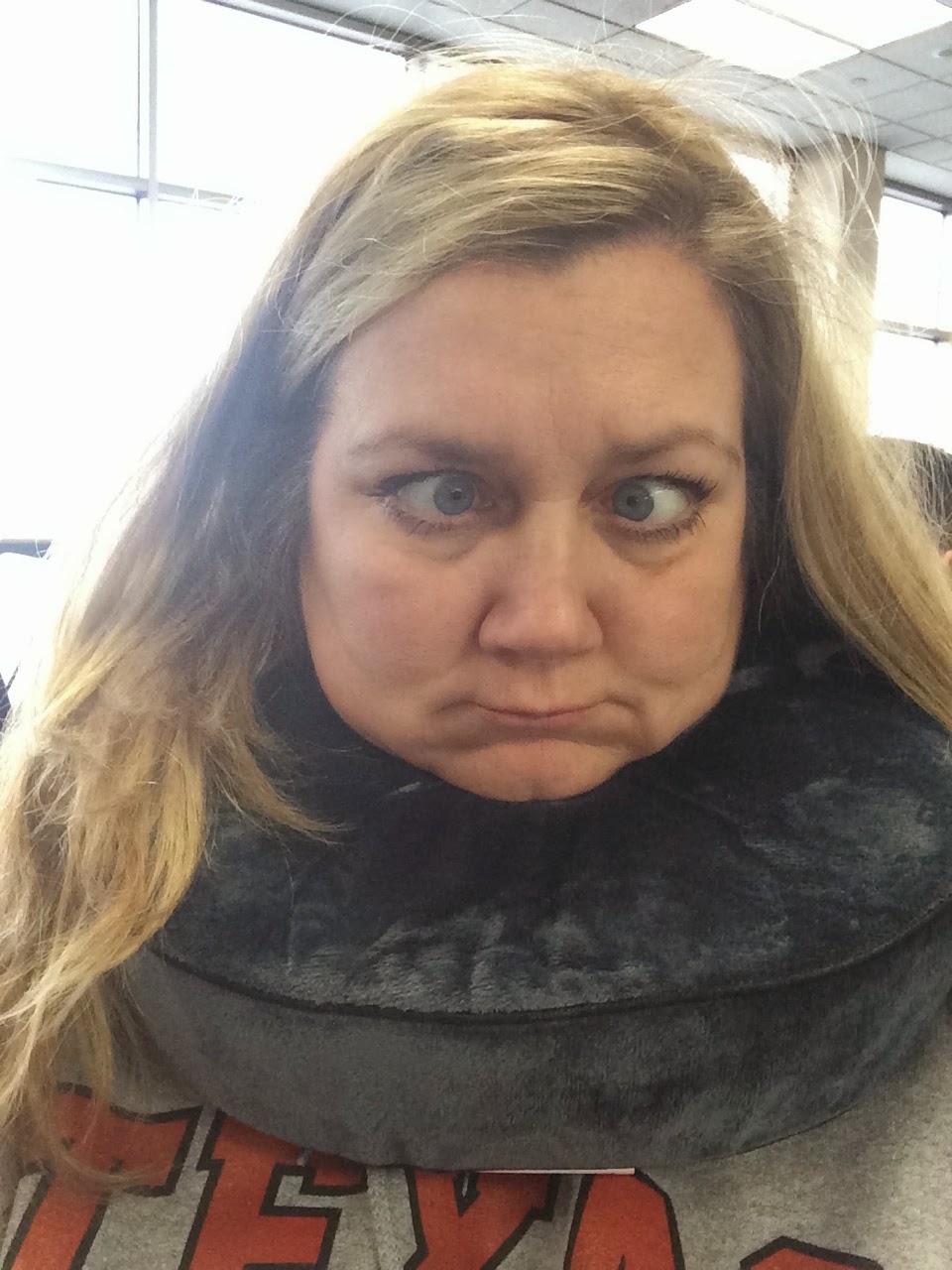 Ok.  So.  Back to the story.  I go back up to the ticket counter and ask Tom if there'd been any "developments" because I was positive it would come to fruition.  He said, "Girl, go back to your seat!".  Then he said he actually was curious and had looked at row 11 and of all the seats on the plane, this was the row that had a preferred seating customer who had the option of moving forward who hadn't checked in yet.  If he decided to upgrade, that'd be my seat!!  He said, "I have to admit.  I DID find that a bit ironic."  ha.  Ye of little faith! 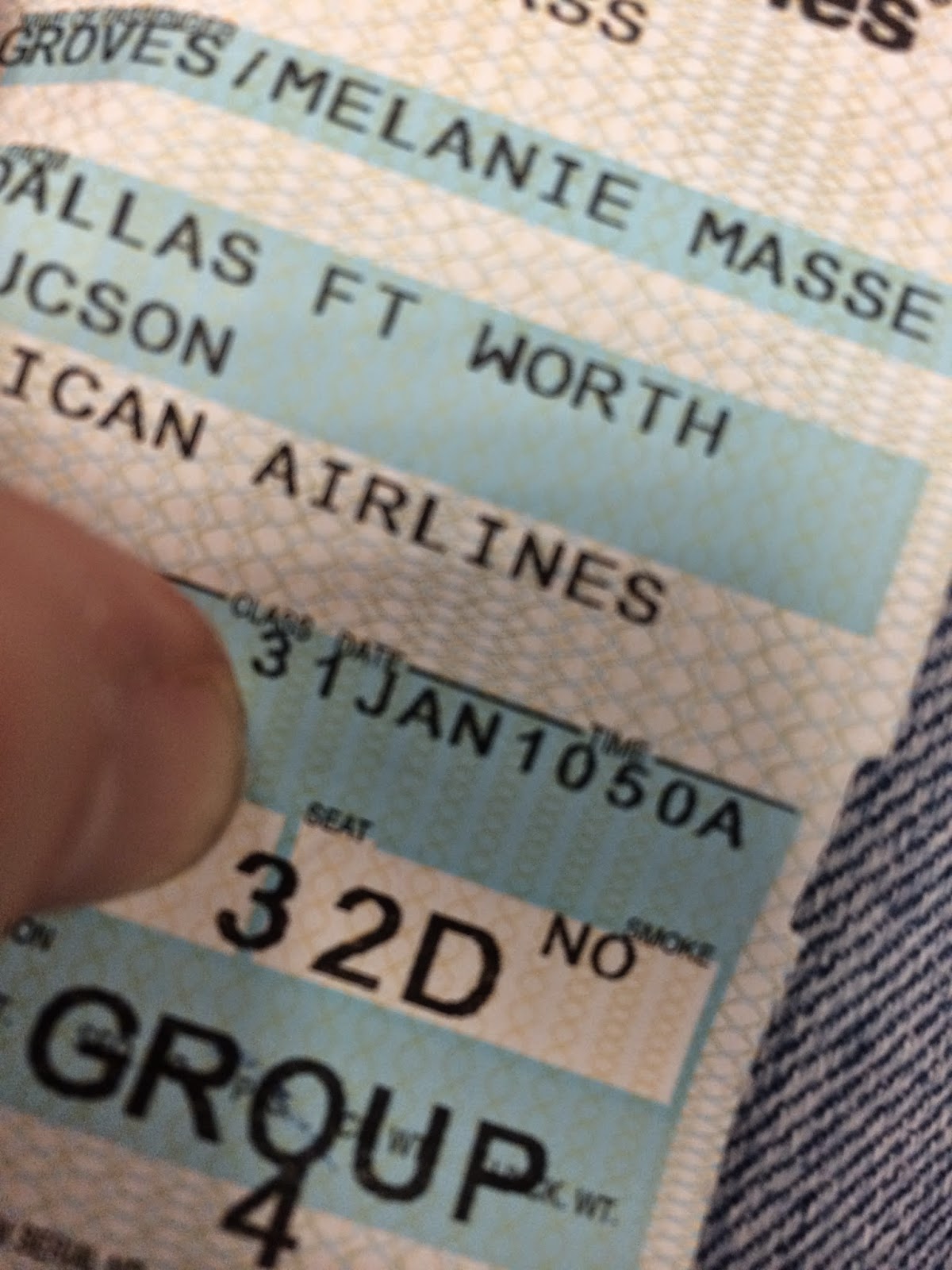 And with that he hands me a ticket for seat  number 6A!!  I said, "Are you serious, Tom?  That is SO awesome!!  You rock!!"
It wasn't until they started loading the military, and I realized they were about to call us by zones that I looked down and saw mine... 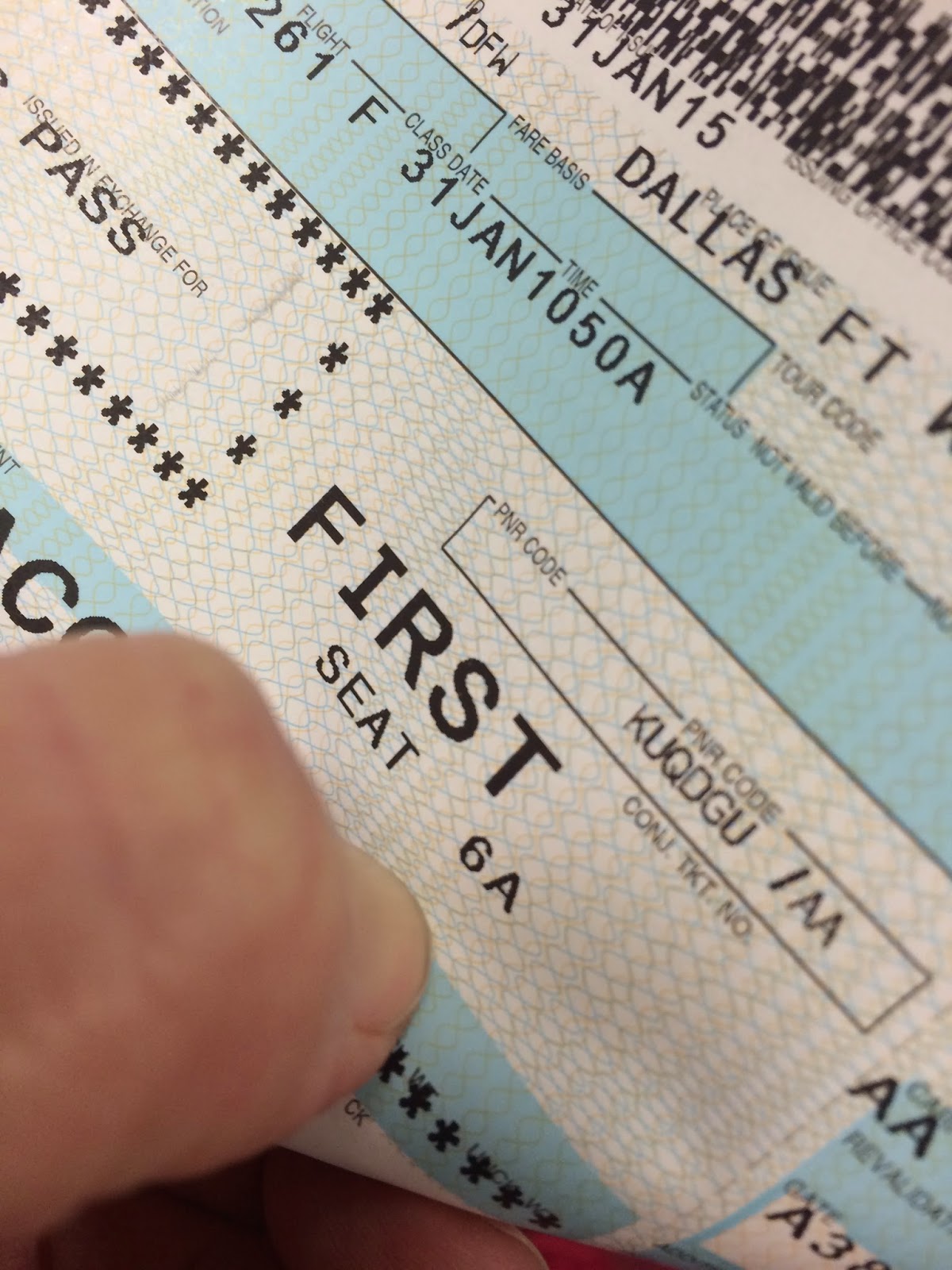 WHATTTT?!!!  Tom had put me in FIRST CLASS!!!  Well, heck yeah!!  I live in HIGH FAVOR, after all!  I walked back up to that ticket counter, pointed to Tom and said, "I am praying high favor over you and your family today!!  I am praying you see God's blessings all around you today!  Be looking for good things to occur."  I was STOKED!!

So, here I am at gate 38 (yes... 11), and now getting on the plane with a complimentary first class ticket on a totally full plane.   From back row to the front rows. 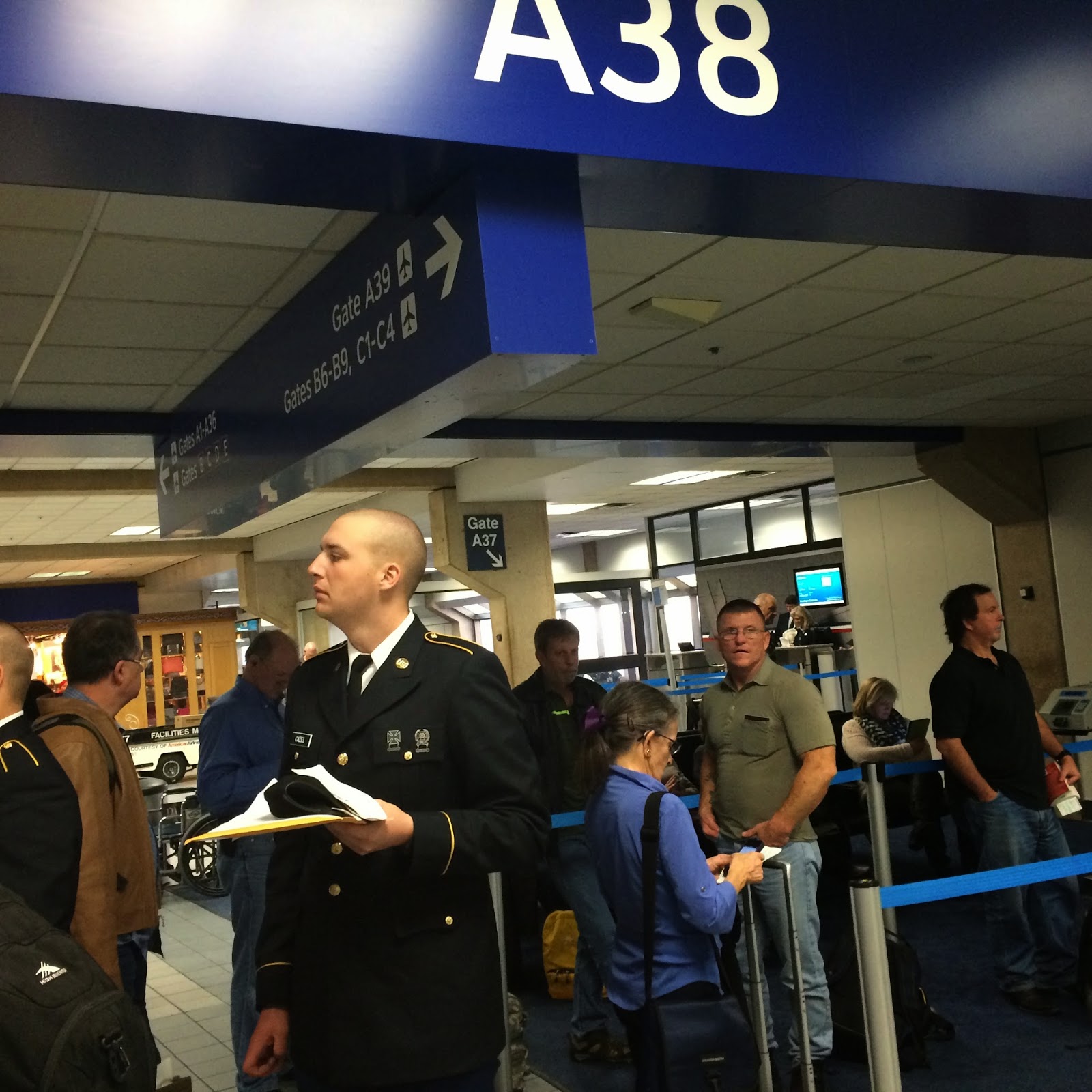 It was right about here when I realized I had been RICHLY blessed!! 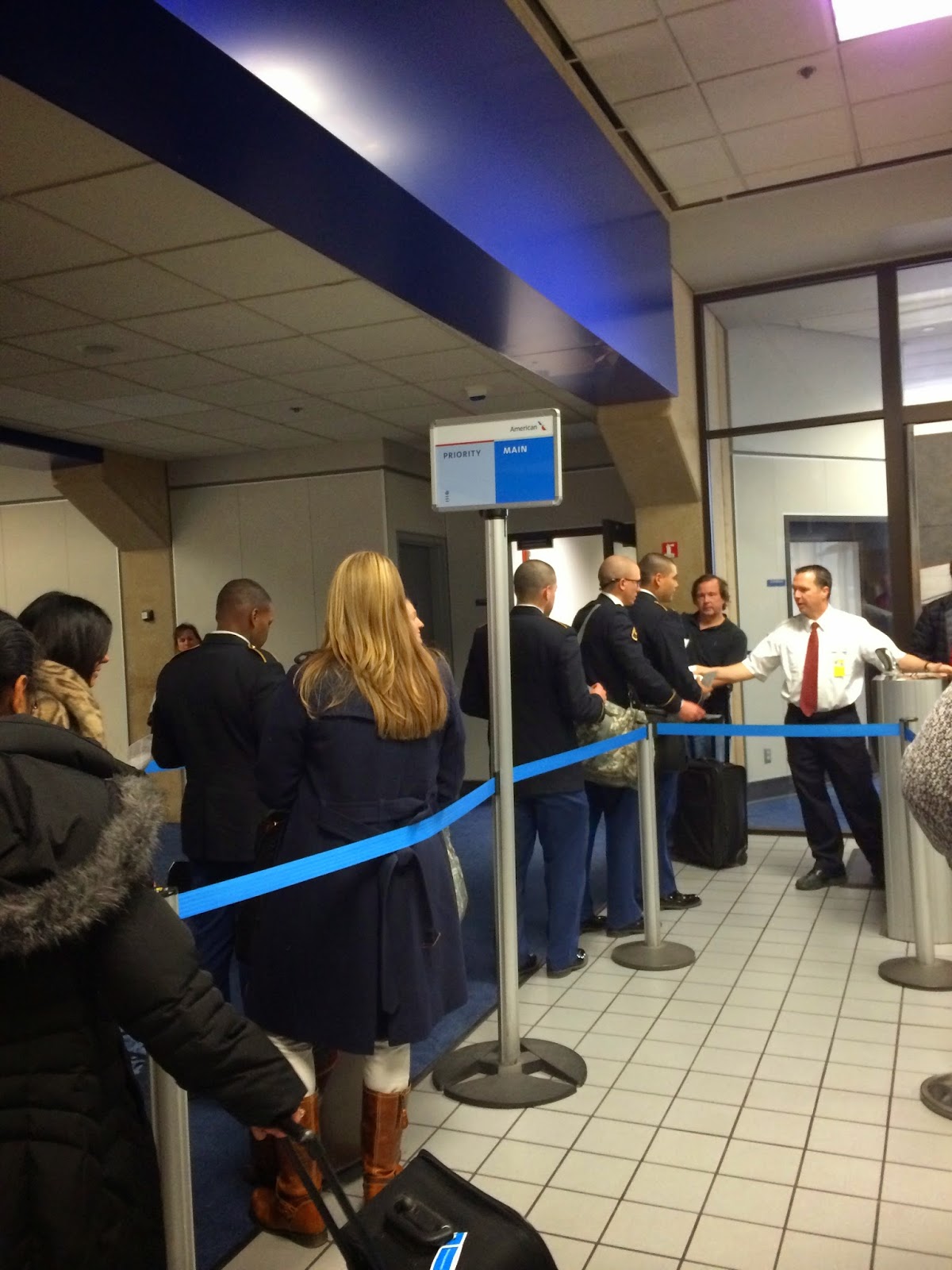 I got on the plane and very comfortably set my neck rest to contour around my sore neck, and sent this (inside joke) selfie to Jessi to let her know that I was doing JUST fine.  She was concerned that she'd let me down in some way by not getting to go at last minute. 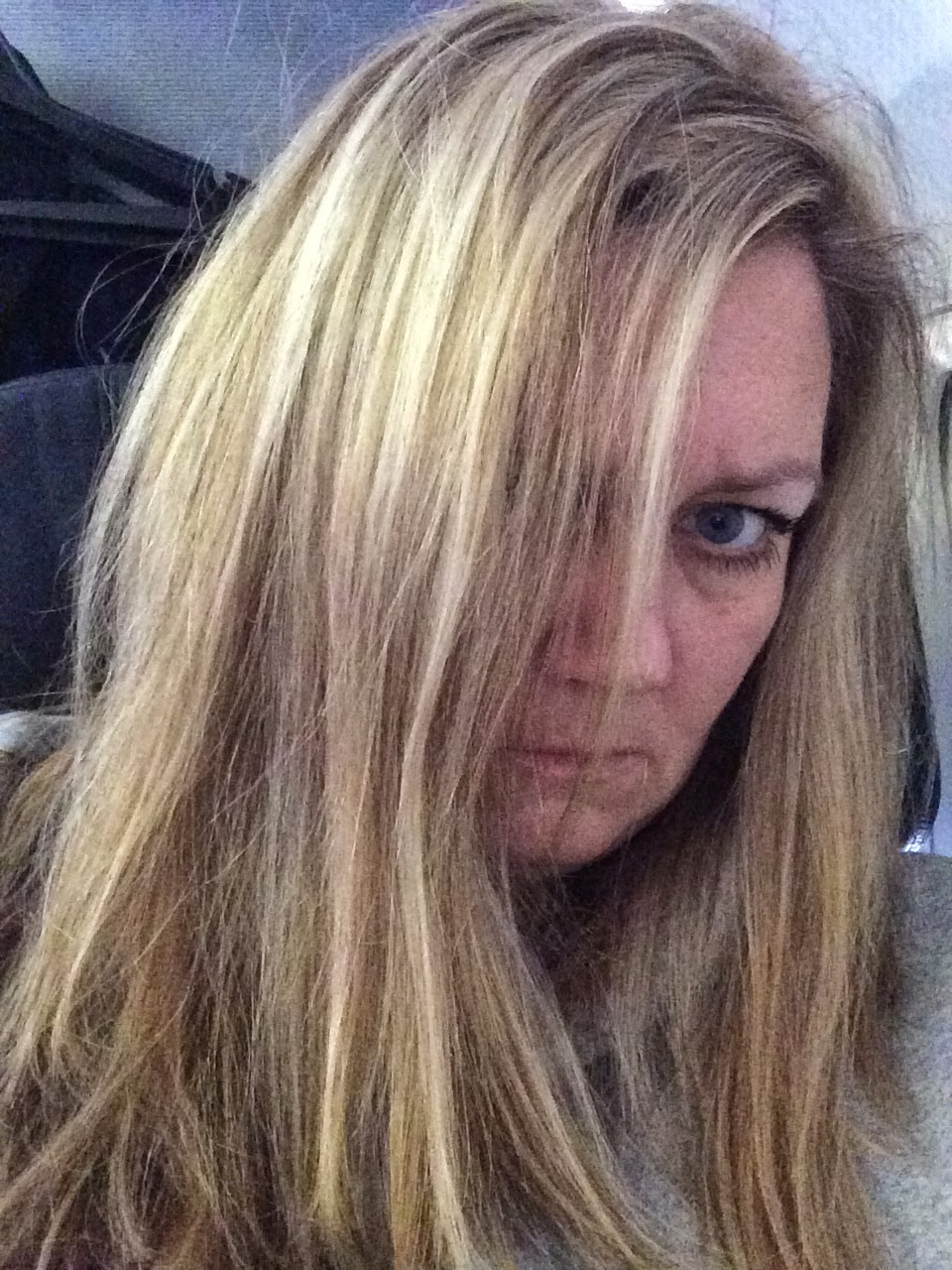 To make her feel better, I told her about the ticket change, and showed her all this legroom!!  :) 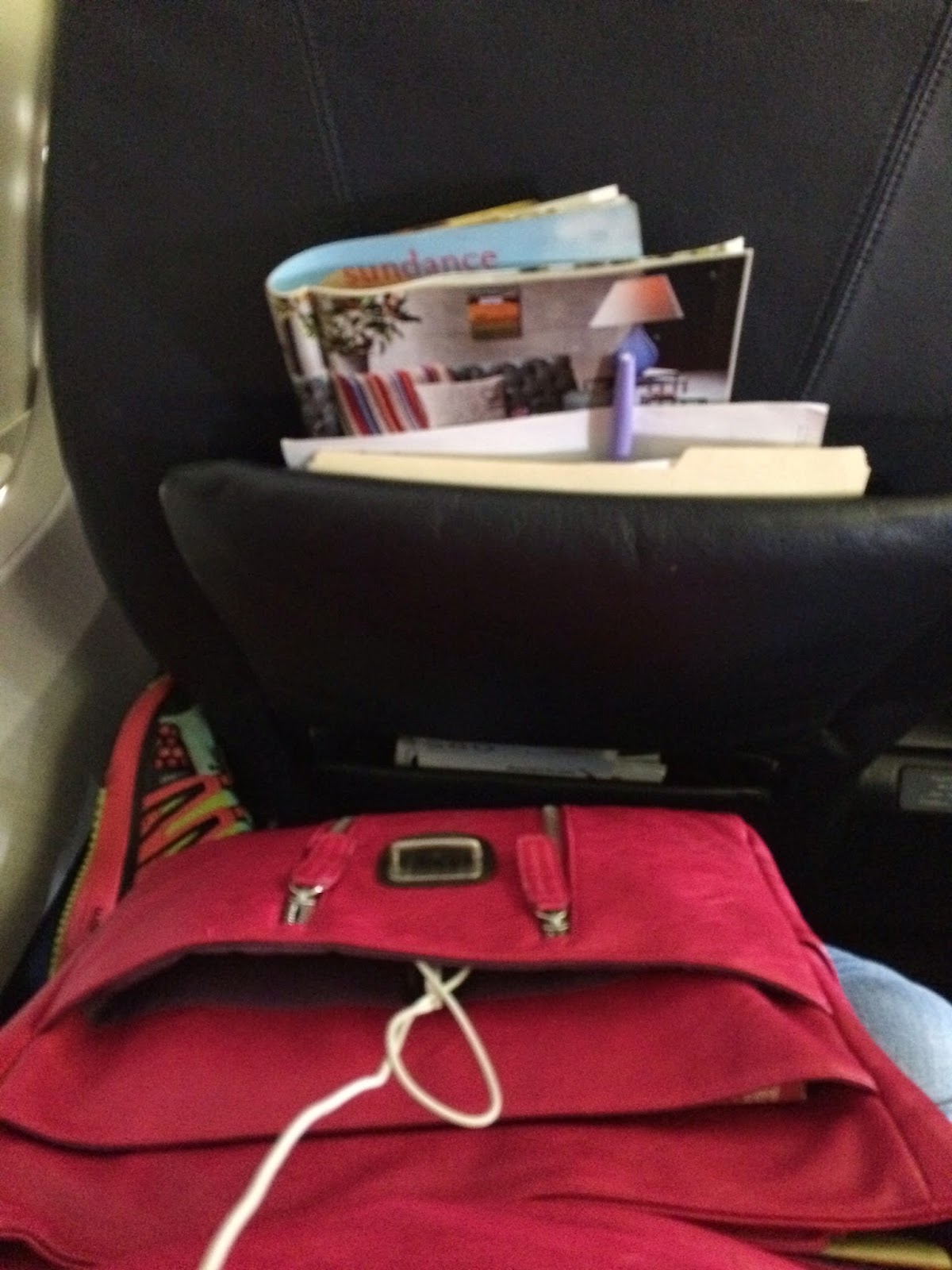 And then, I just decided to get plain ol' obnoxious!! 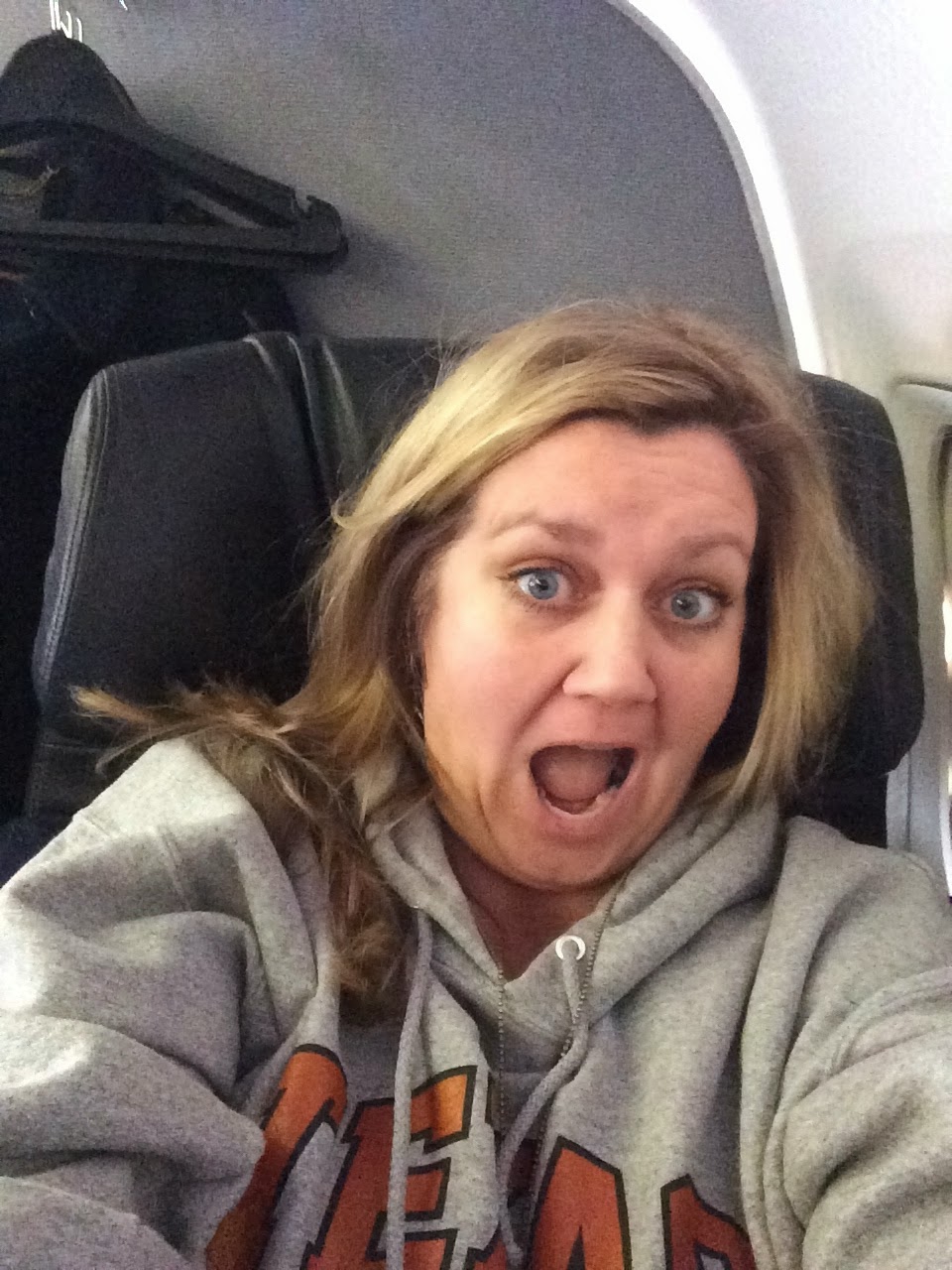 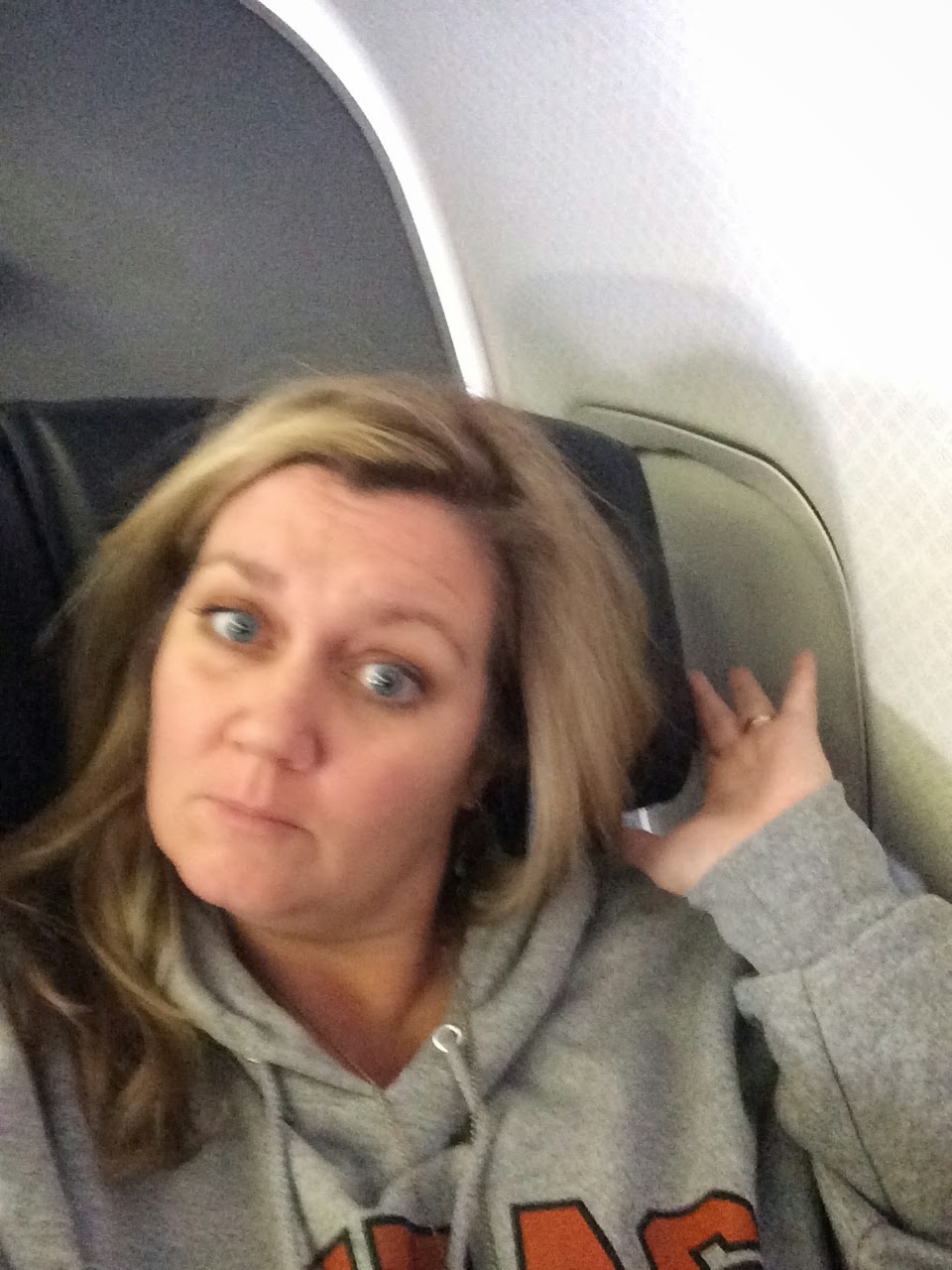 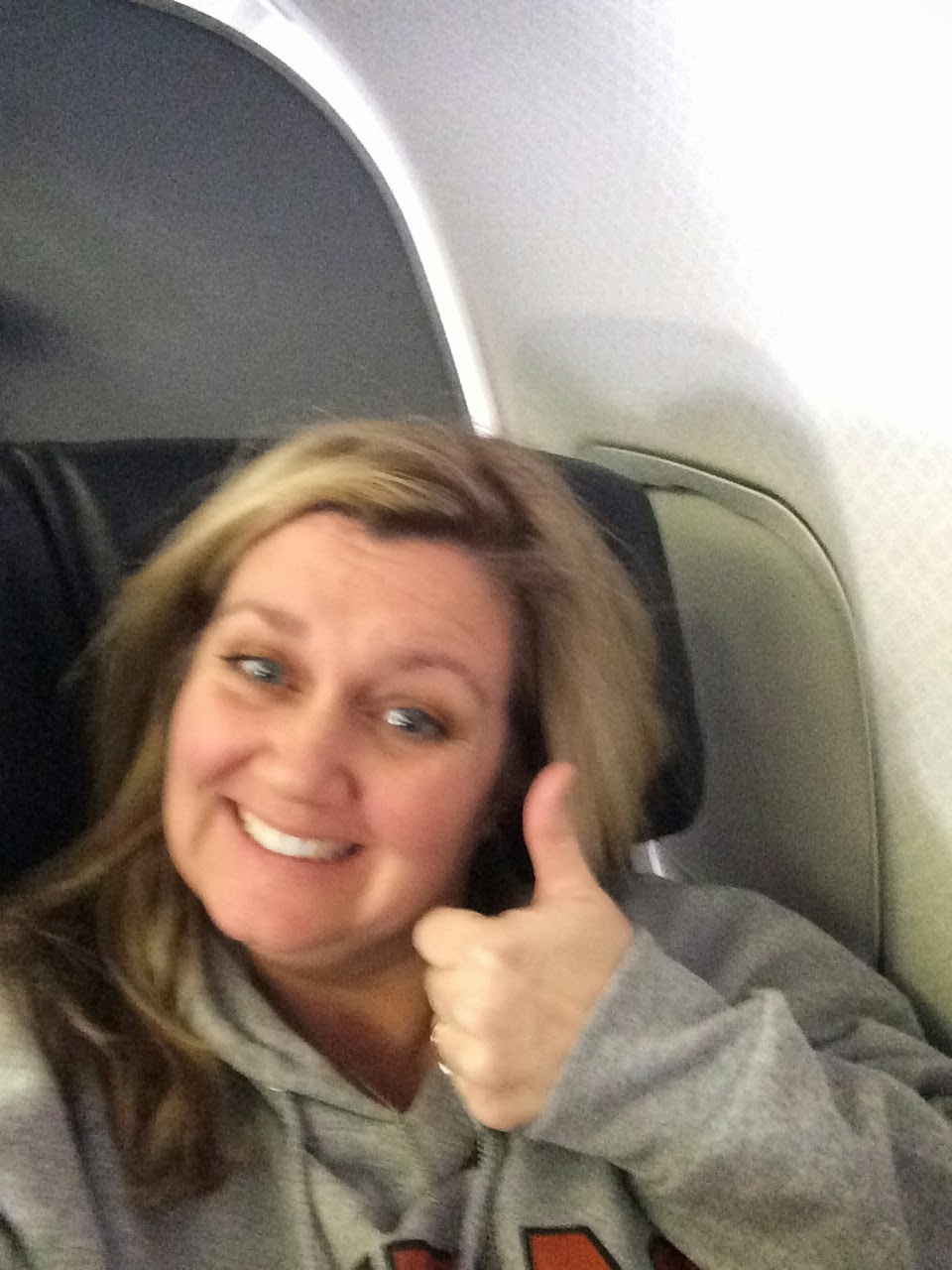 Told her I was sleeping on the way there. 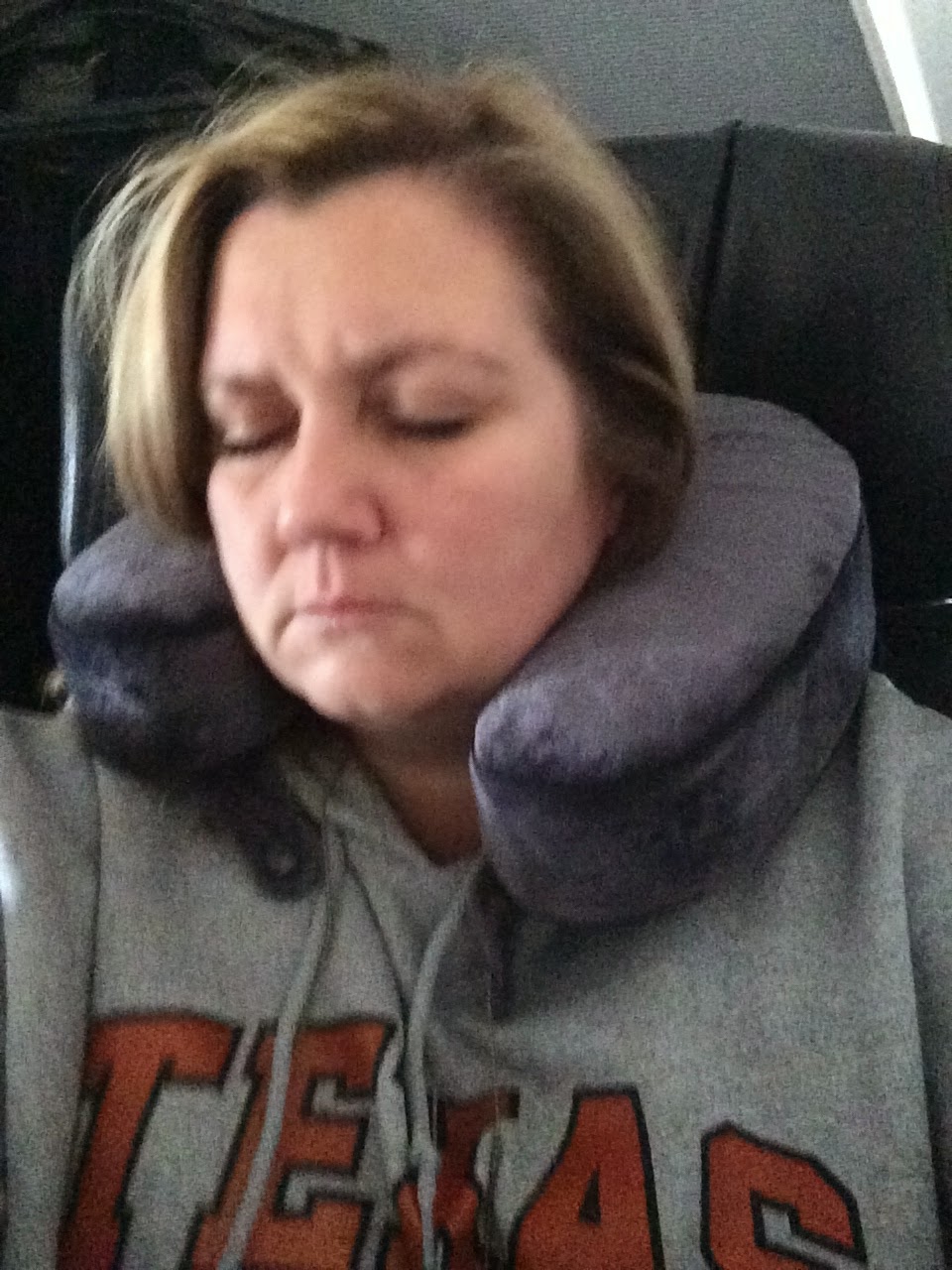 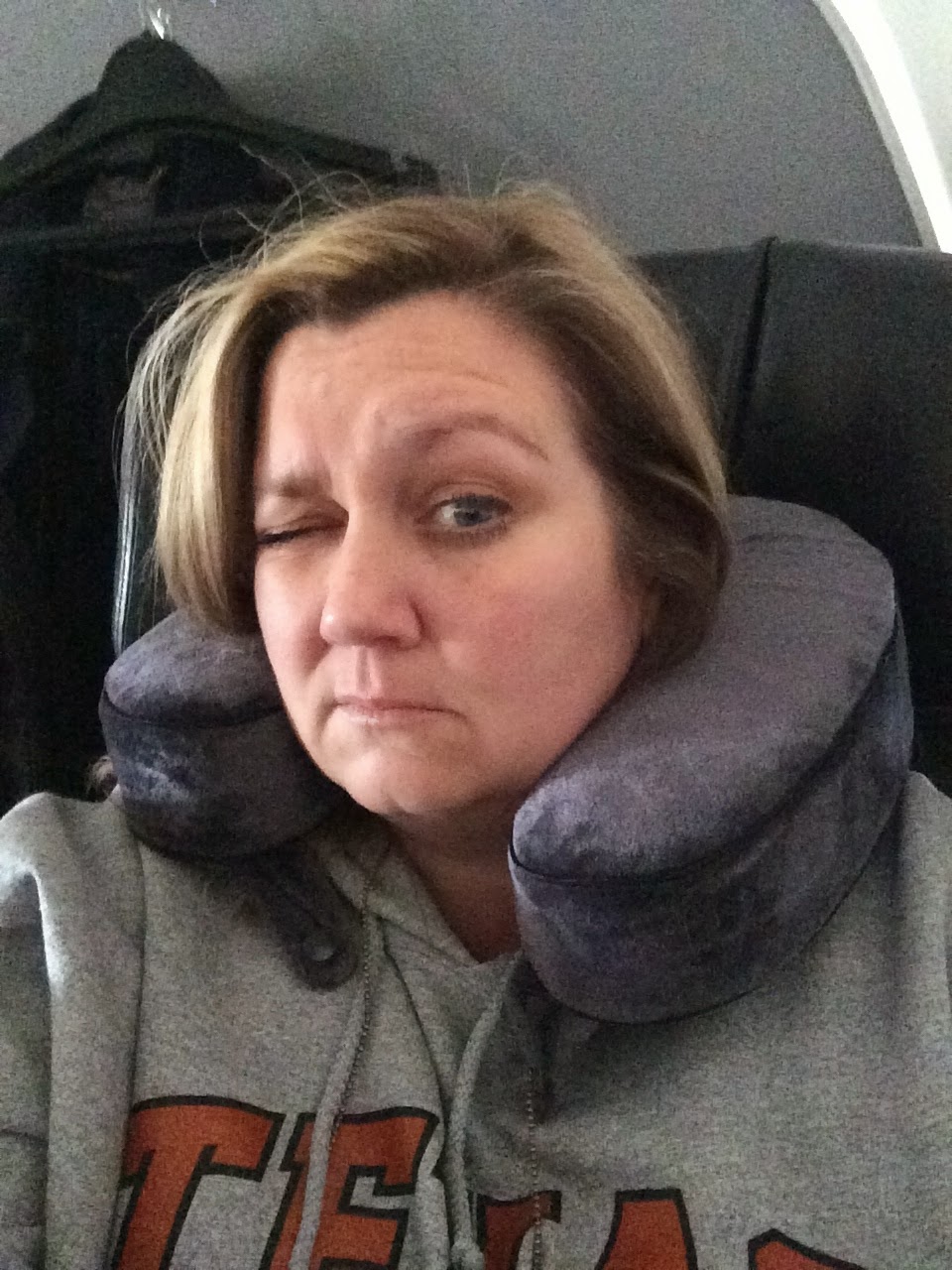 I wasn't sleeping at all on this trip!!  I was having too much fun.
(That's the world's biggest passenger jet, the Airbus, double decker, out on the tarmac) 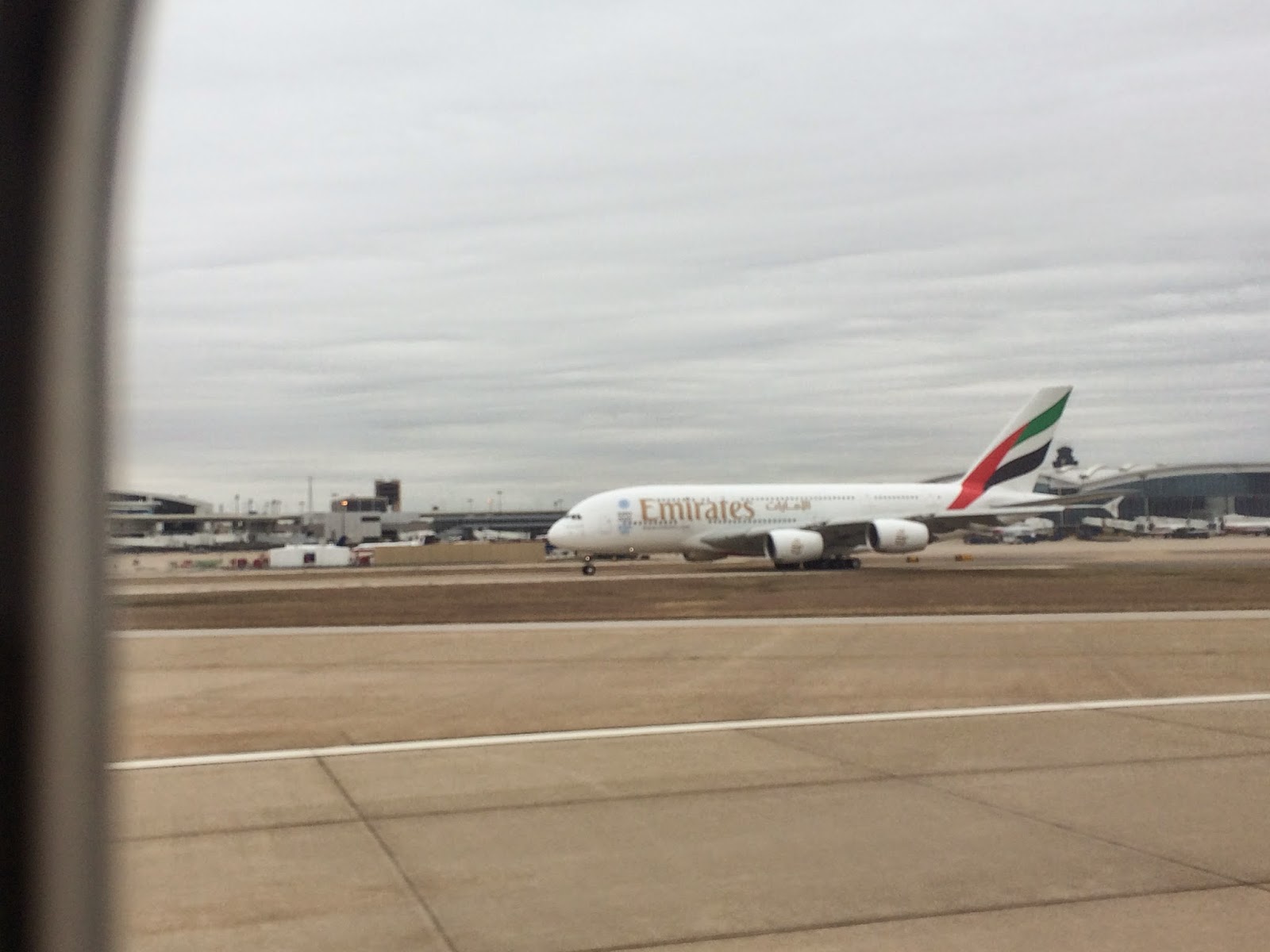 I was reading a book, and felt that this comment was very pertinent to my situation.  I really DID expect to get a better seat!  And I've BEEN telling Todd that I think I really "need" to be in first class.  I mean, why not?  SOMEONE needs to sit there after all.  Am I not worthy?! 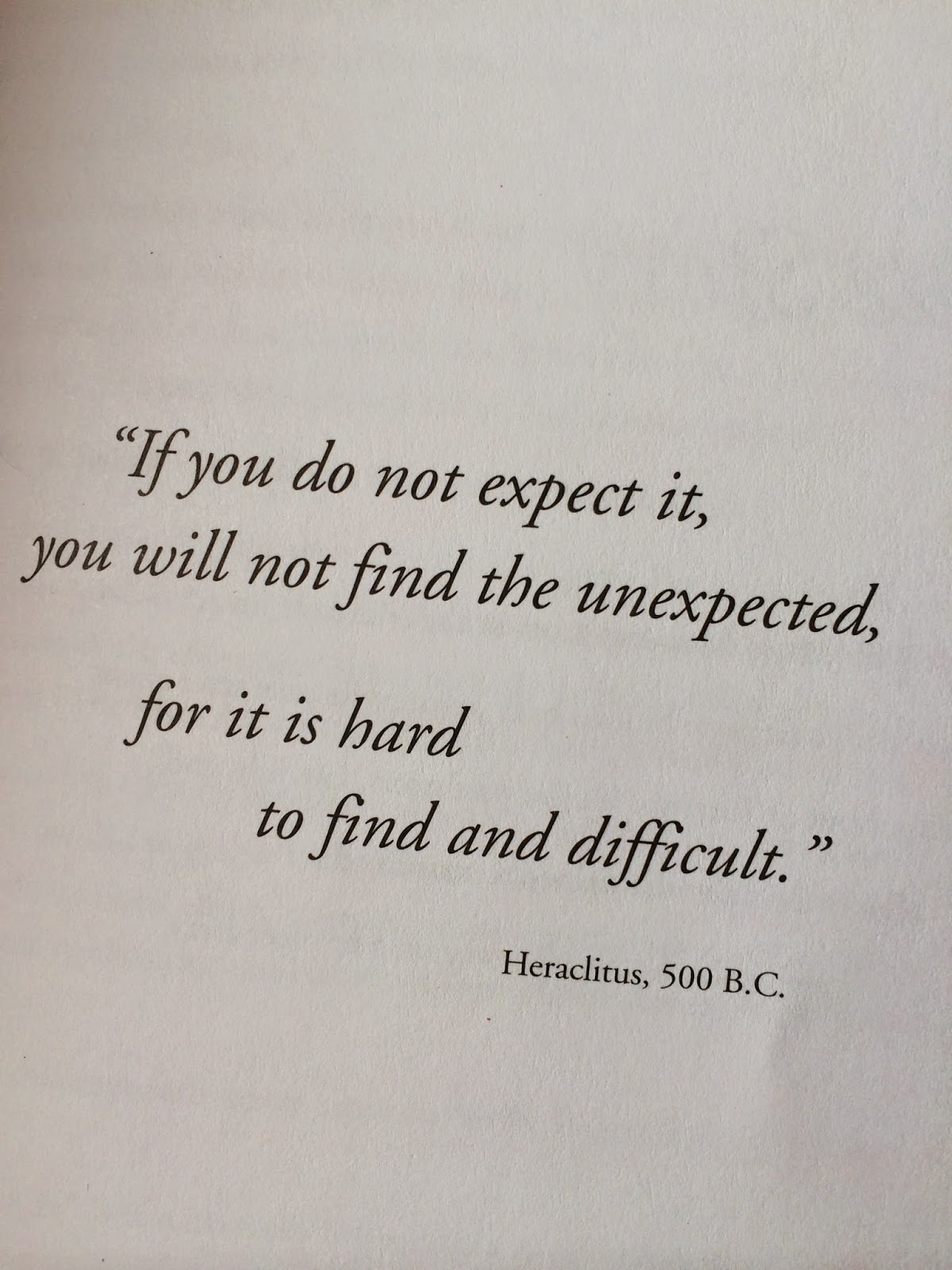 I told Jessi, I was doing "ok", just wish this pesky stewardess would stop being all up in my face, replenishing me with free bloody marys!  ha 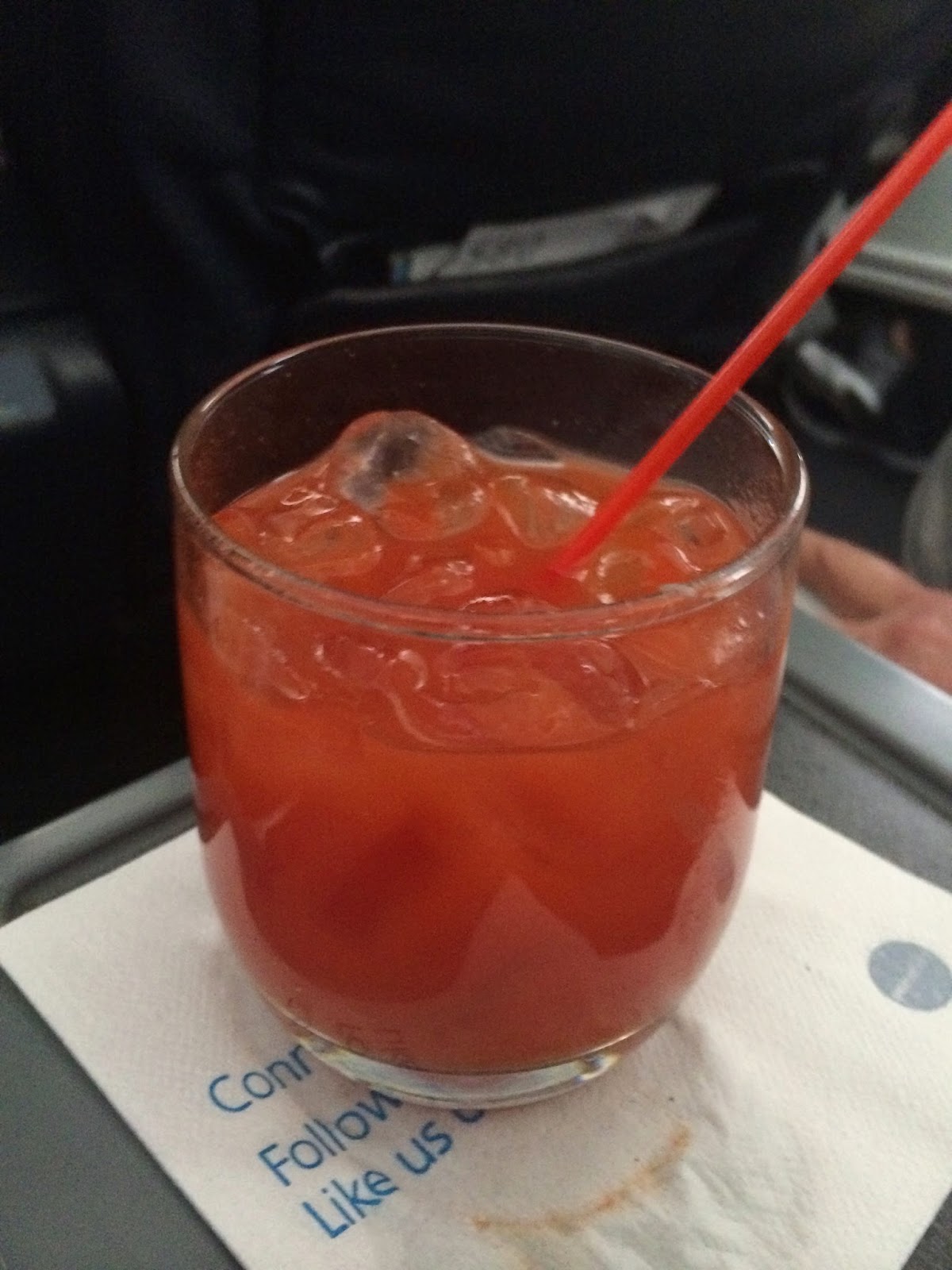 I took a picture of the second one too, and sent it to Jessi. 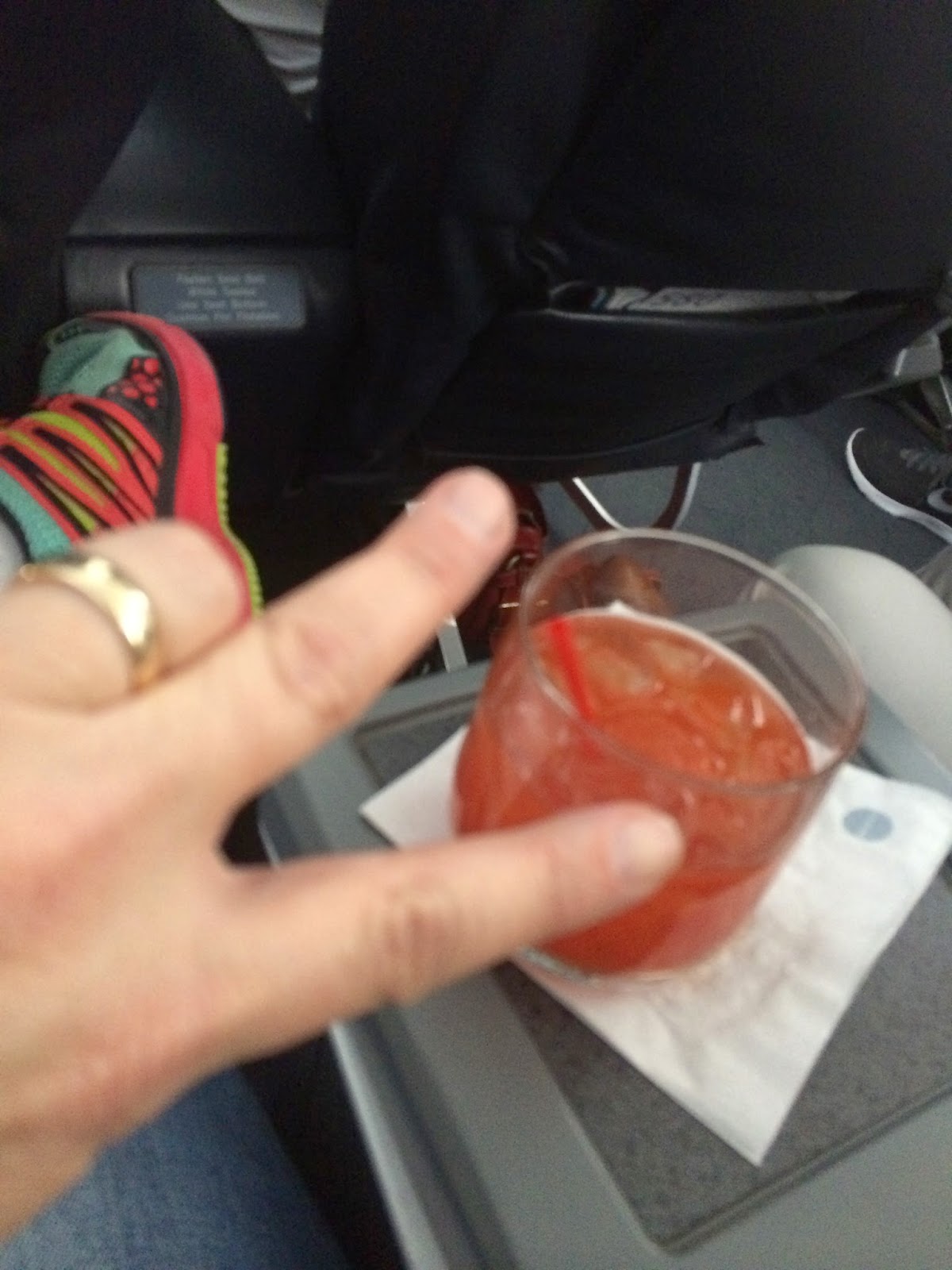 I was reaaaallly enjoying my first class ride!  haha
ANd I met this friend next to me too.  I love meeting new friends. 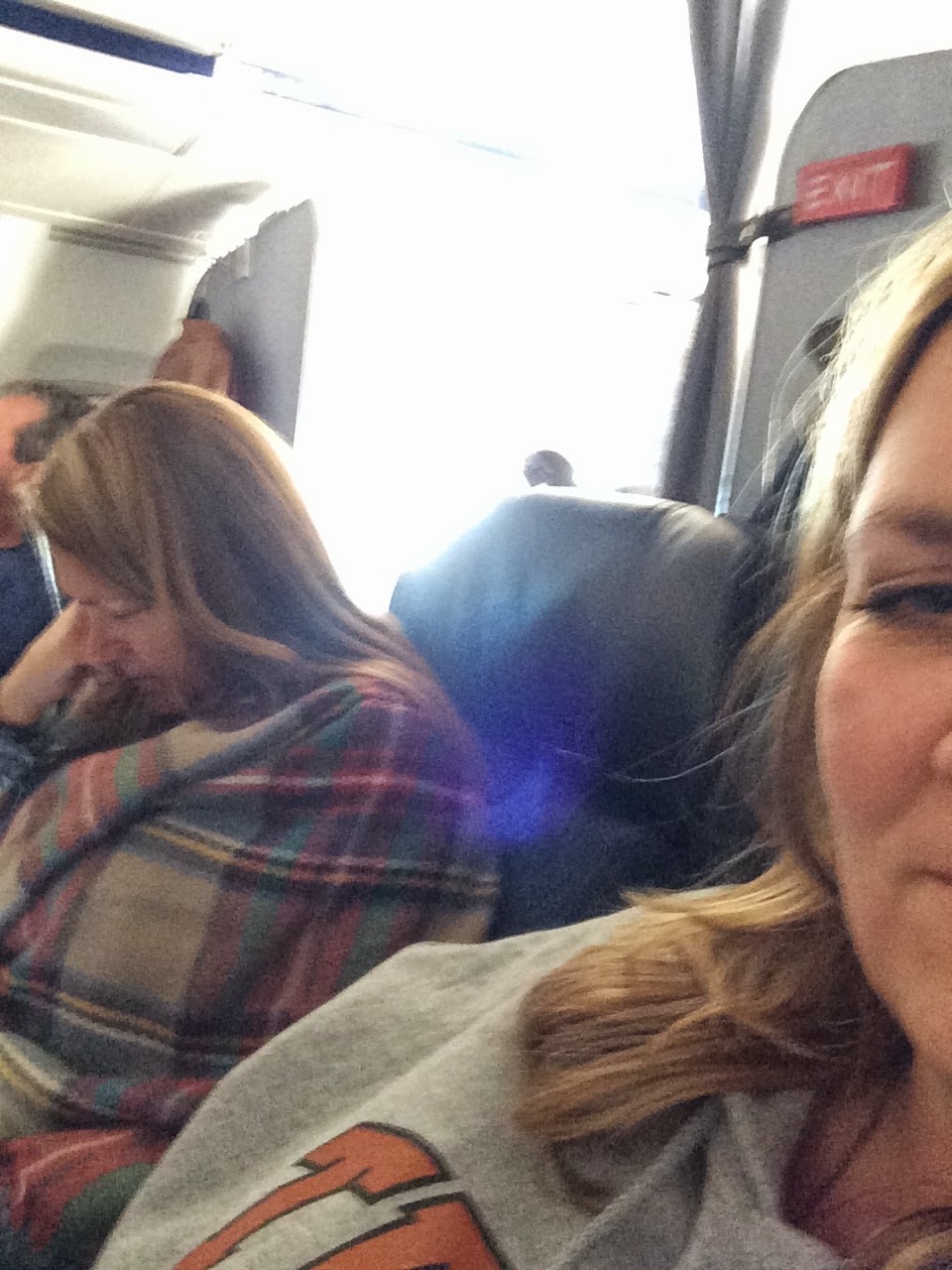 I was also reading THIS on the plane which talked about "intuition", "dreams", "coincidence" and "luck". 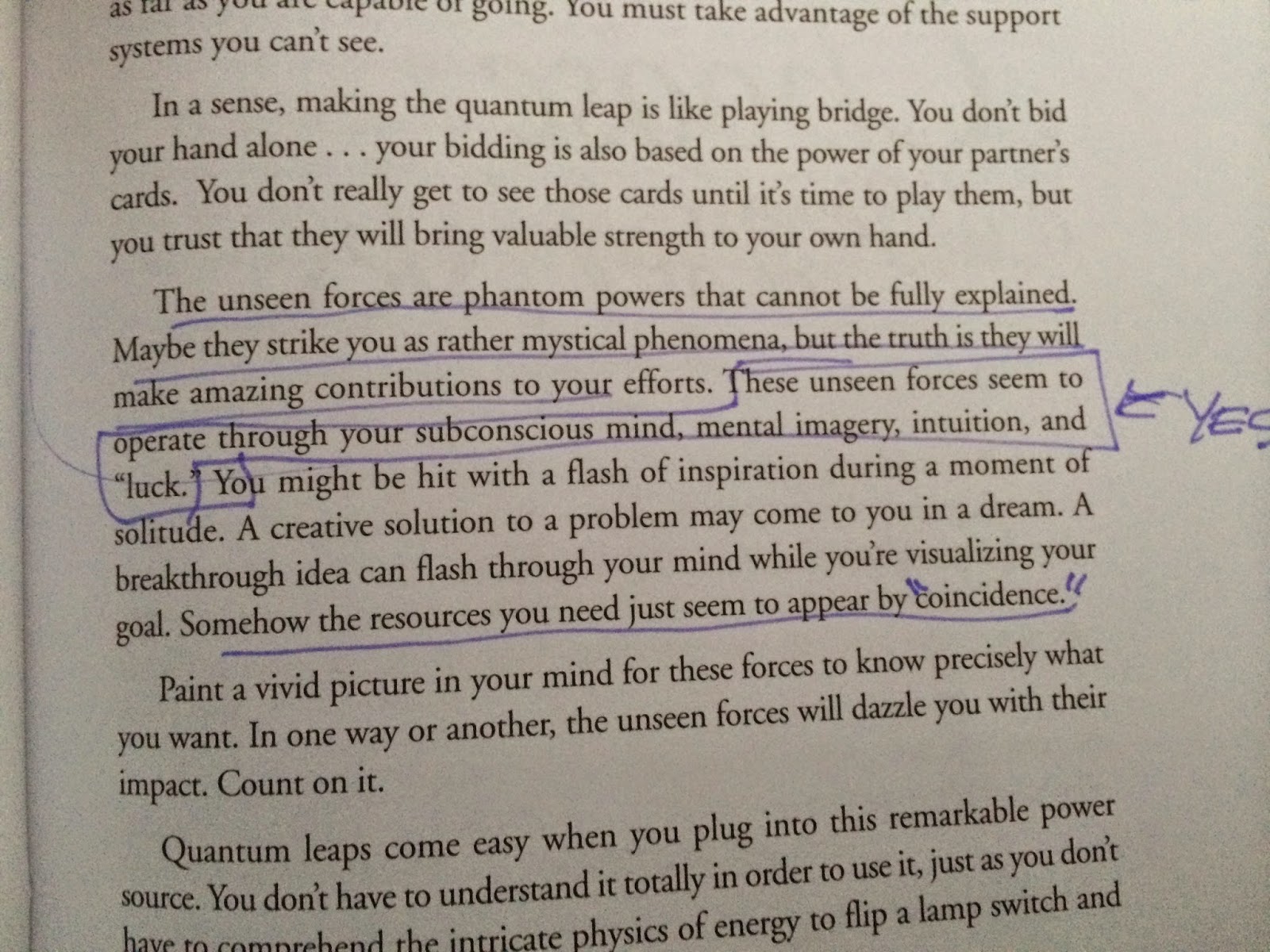 Let me tell you... first off, if  I hadn't gone up to Tom and asked him about a different seat, I surely wouldn't have ever gotten one.  Moral of that story...Be brave! 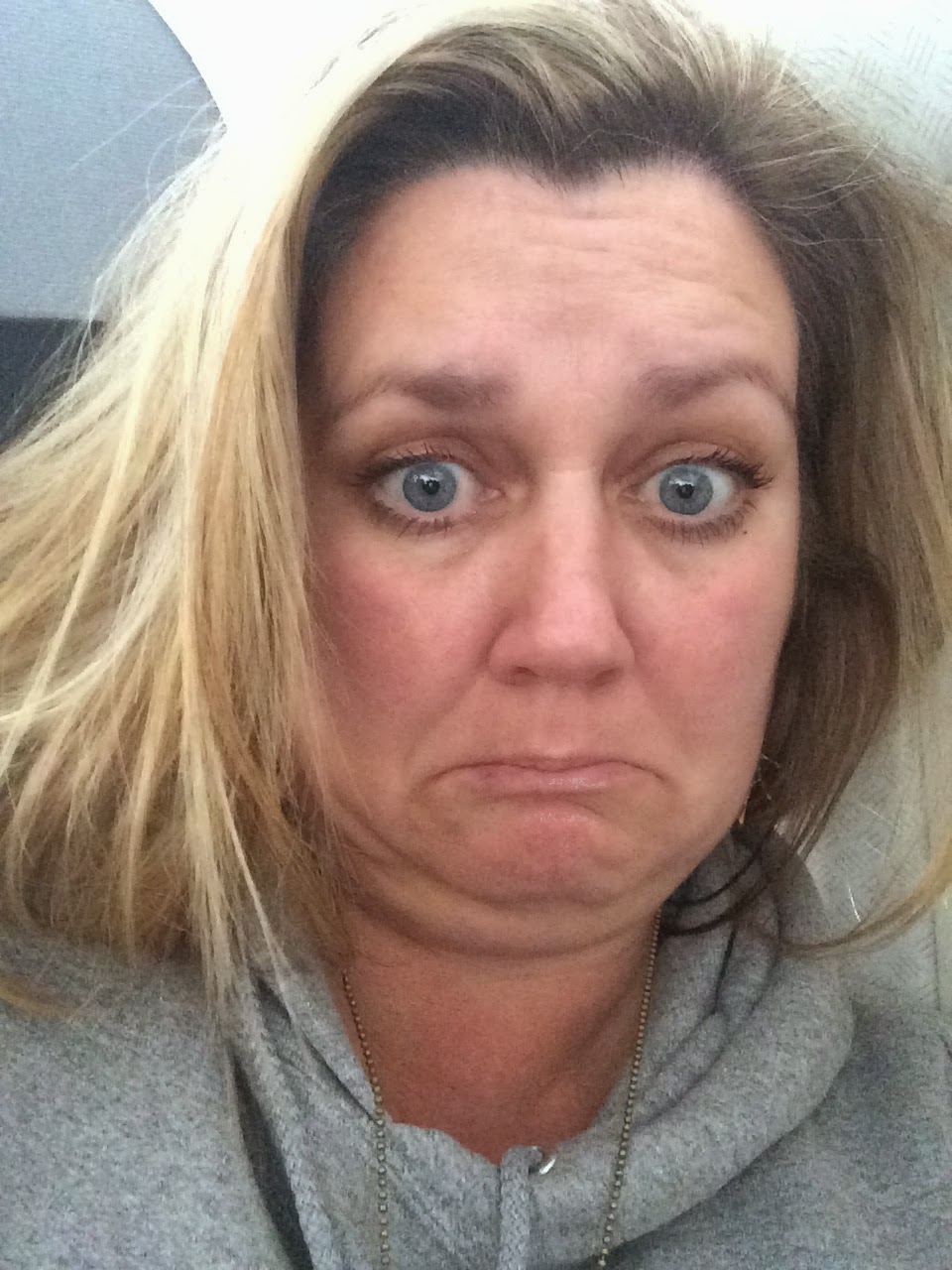 And finally, I was in Tucson.  Immediately welcomed by Superbowl paraphernalia, which I snatched up for my sports loving Boo. 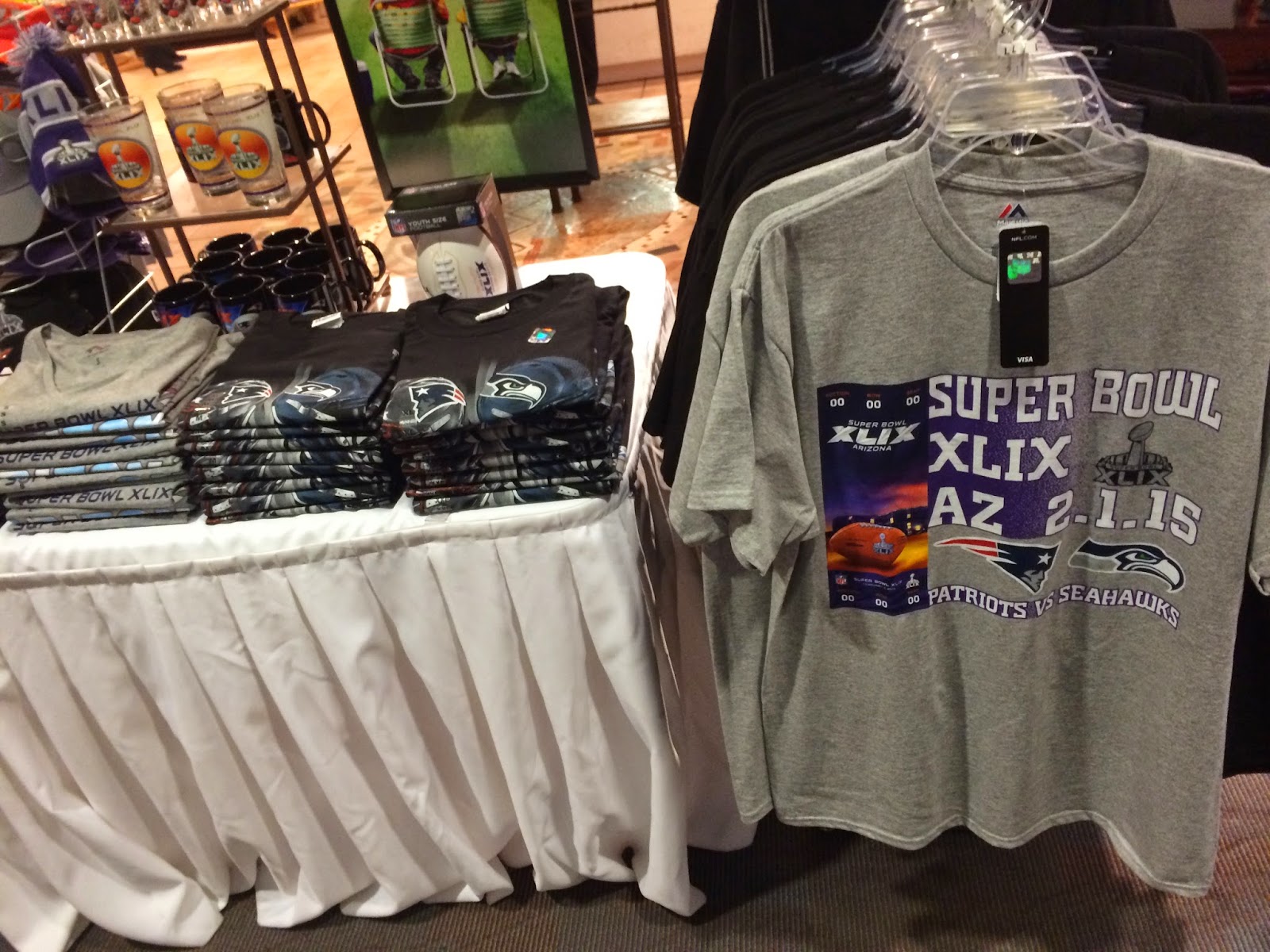 Sooo... that was my trip THERE.
If you think it was the BEST story of the trip, you'd be incorrect.  This trip went from good to better!!  In fact, I cannot wait til I get to the story about my flight home!!  (First class again... there's your sneak peek!!)

Thanks for reading the blog.  Thanks for caring about all my craziness.  I am blessed.

First class again!? Can't wait to read more. Saw pics of the beads and awesomeness you shared on Facebook.
I need to decide which shirt I want to order :). Want to hear about what you had going on this weekend also.. A show of some sort?

I'm about to share almost all my pics and tell storie! Including the info on the booth this weekend!

Yes you do, Kim! It's a fun thing to behold! Thing is... I expect it. And I've actually LEARNED to do this. I'm not being cocky in the least. Just faithful!

I would love to know what Tom shared with his family about his experience with the lady and her 11. I am sure it is something he will think about often..especially when his High Favor taps him on the shoulder. Thanks for sharing!

Mel you absolutely crack me up with your pictures and stories! I love reading your blog!!!

Love, love, love it! Cannot wait for the next installment of your adventure.. Thanks for the Monday morning smile!

Some days YOU are the highlight of my day! Thank you.

I am serious. Your energy amazes me. I don't know how you fit all you do in a day. Just the activity of moving around is unbelievable. What you actually do in every location is crazy! Lol

I definitely like toacimize my time and ultimately my life. Some would disagree with that and think I "do too much". But that's their opinion, and God have them a life to do with as they please, just as He did me! I LIKE to "suck the marrow out of it!

Suck the marrow and eat the bone!! As I get older I am more useless and very content to be at home with my critters. I think I am just jaded by the people I am around on a regular basis and they suck and I love the quiet and solitude.

Nielsen sent us a tv diary to fill out for a week. Most days the tv isn't even on! They will be so sorry they sent us one lol. But I love pandora. And cat purrs and snores. Heck, I am redneck enough that the old dog fartin doesn't bother me anymore lol lol lol

what an awesome day and trip. I've been tied up and haven't had a chance to check in so I just caught up~ you always bring a smile to my face