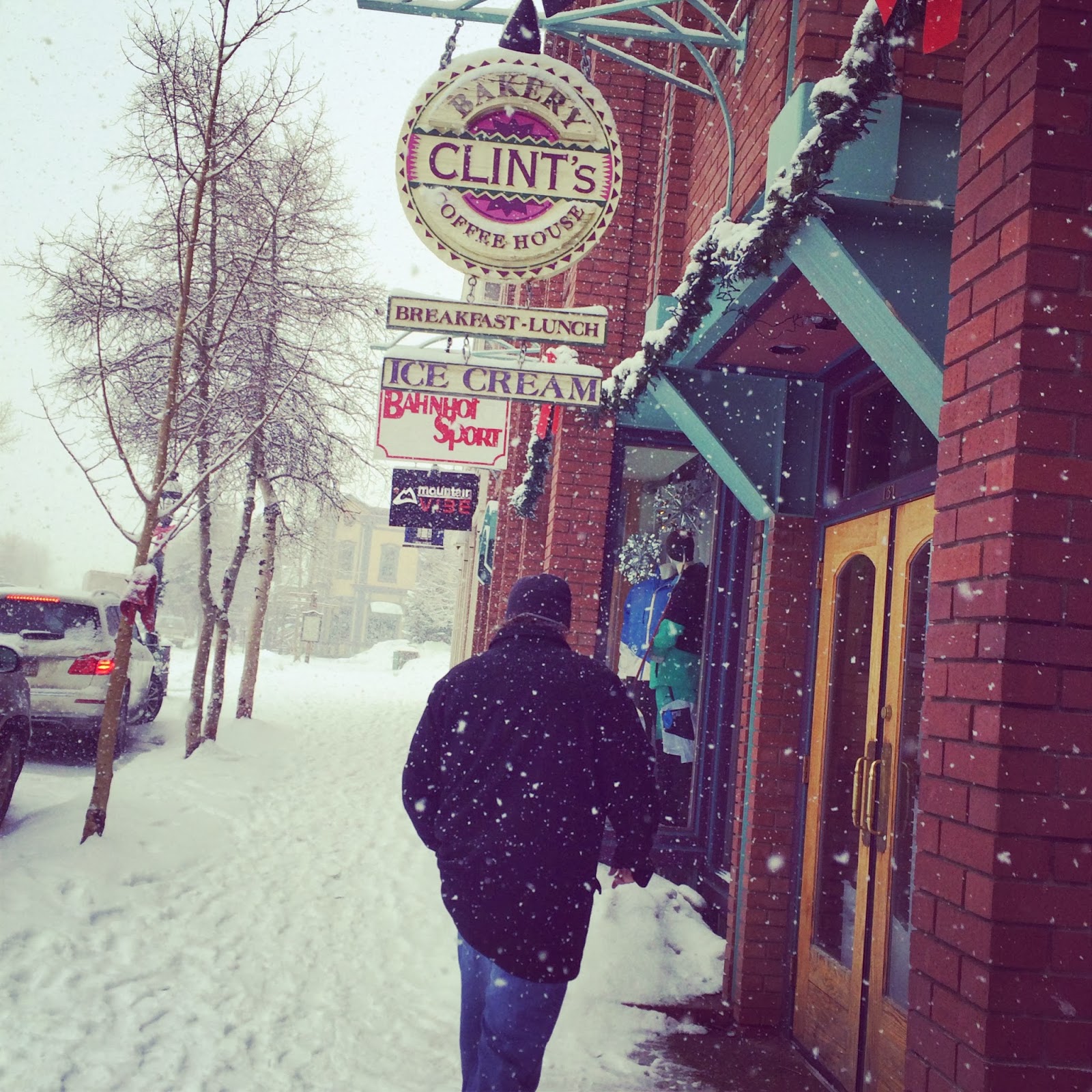 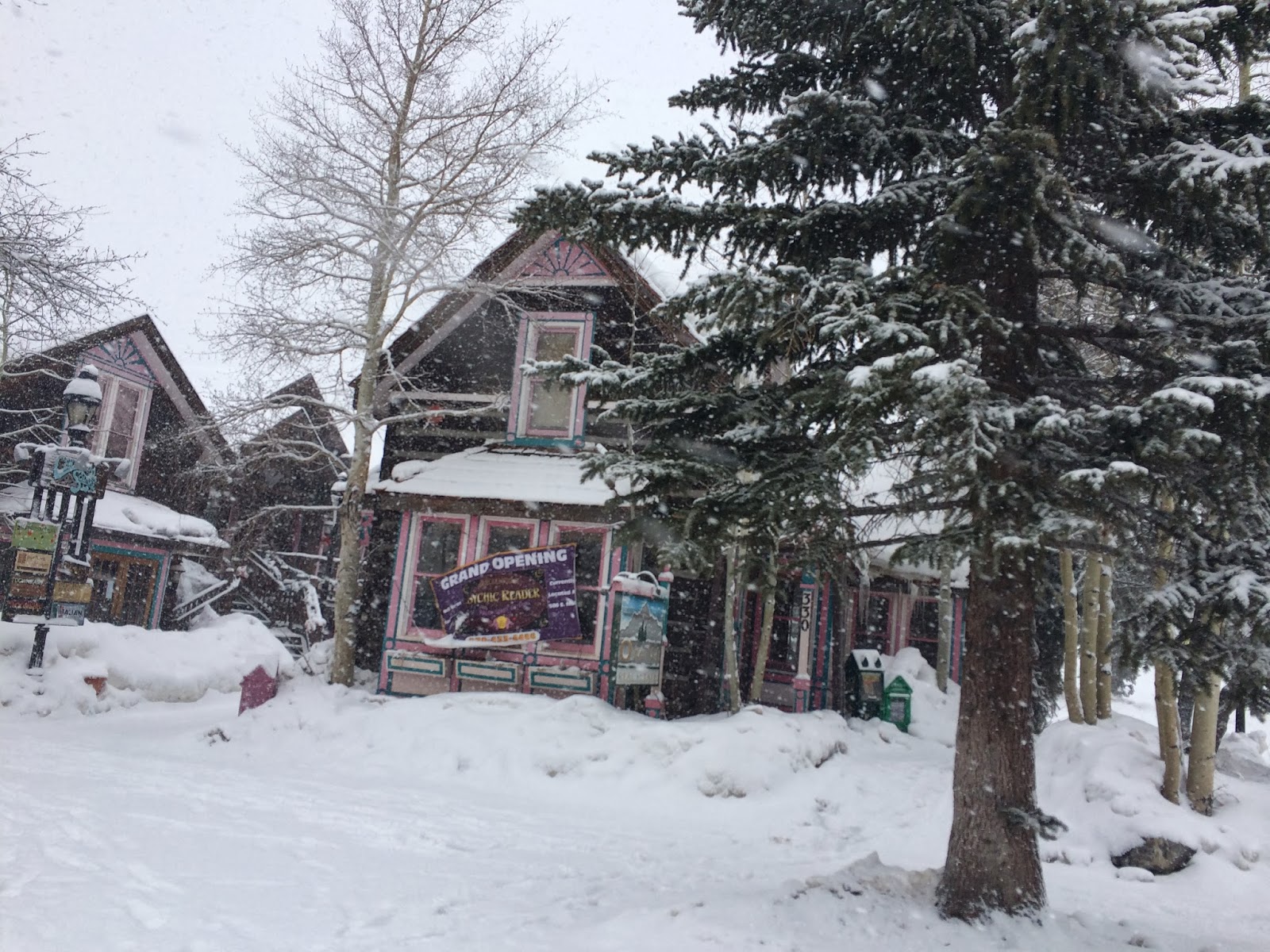 So for some reason, occasionally my computer likes to do weird things... like load all my photos in reverse.  So, hang on while I try to reverse my thinking to add the text to my story which was totally the opposite in my head when I started uploading pics.

This is downtown Breckenridge, and one of the reasons we choose Breck to go skiing.  It is such a quaint little town.  I told Todd I think they must make it a prerequisite that if you want to have a business here, it has to be CUTE! 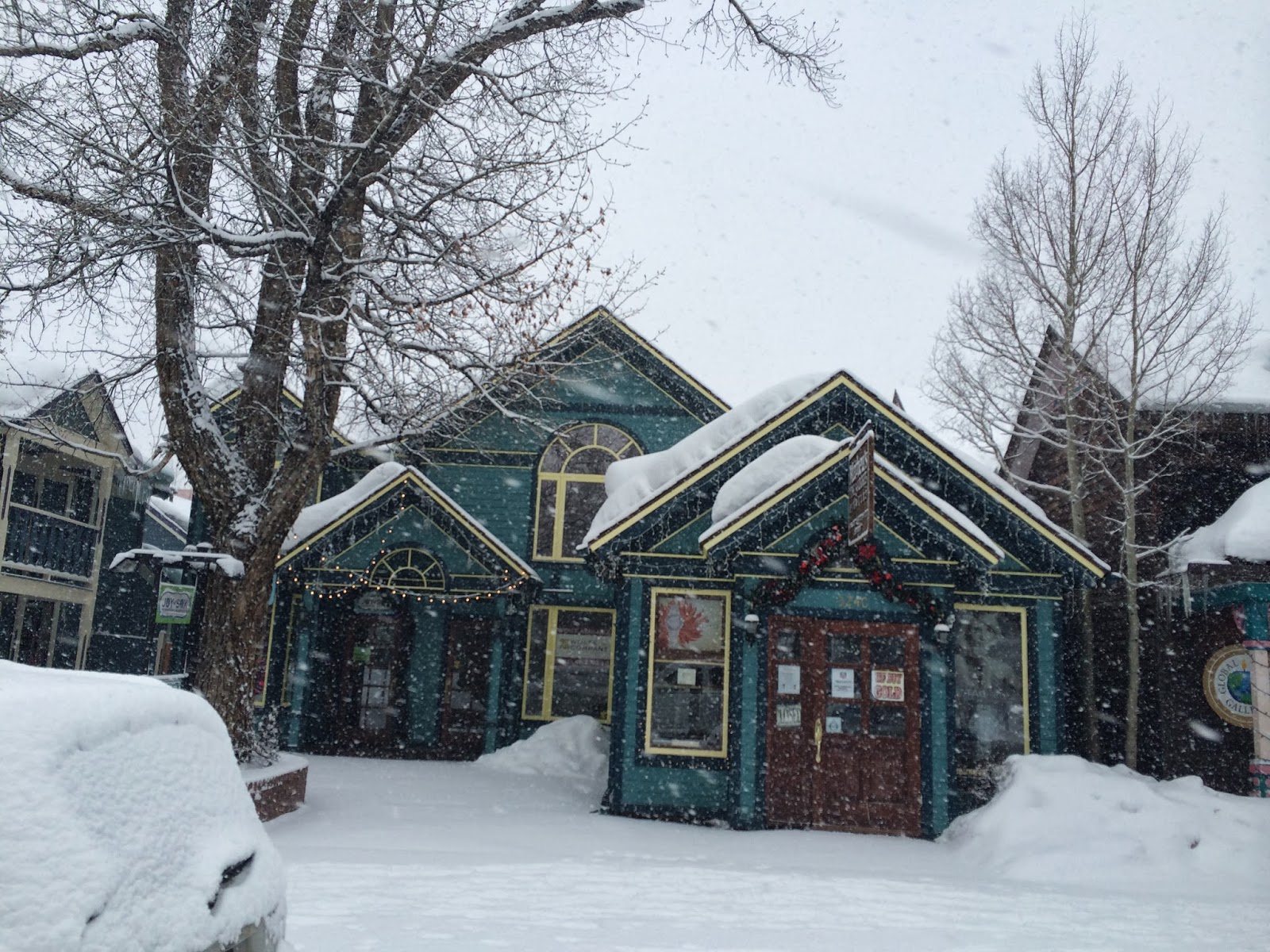 And actually, this is the one and only time that Todd and I took a few minutes to drive down Main Street after we dropped the girls off at Ski School. 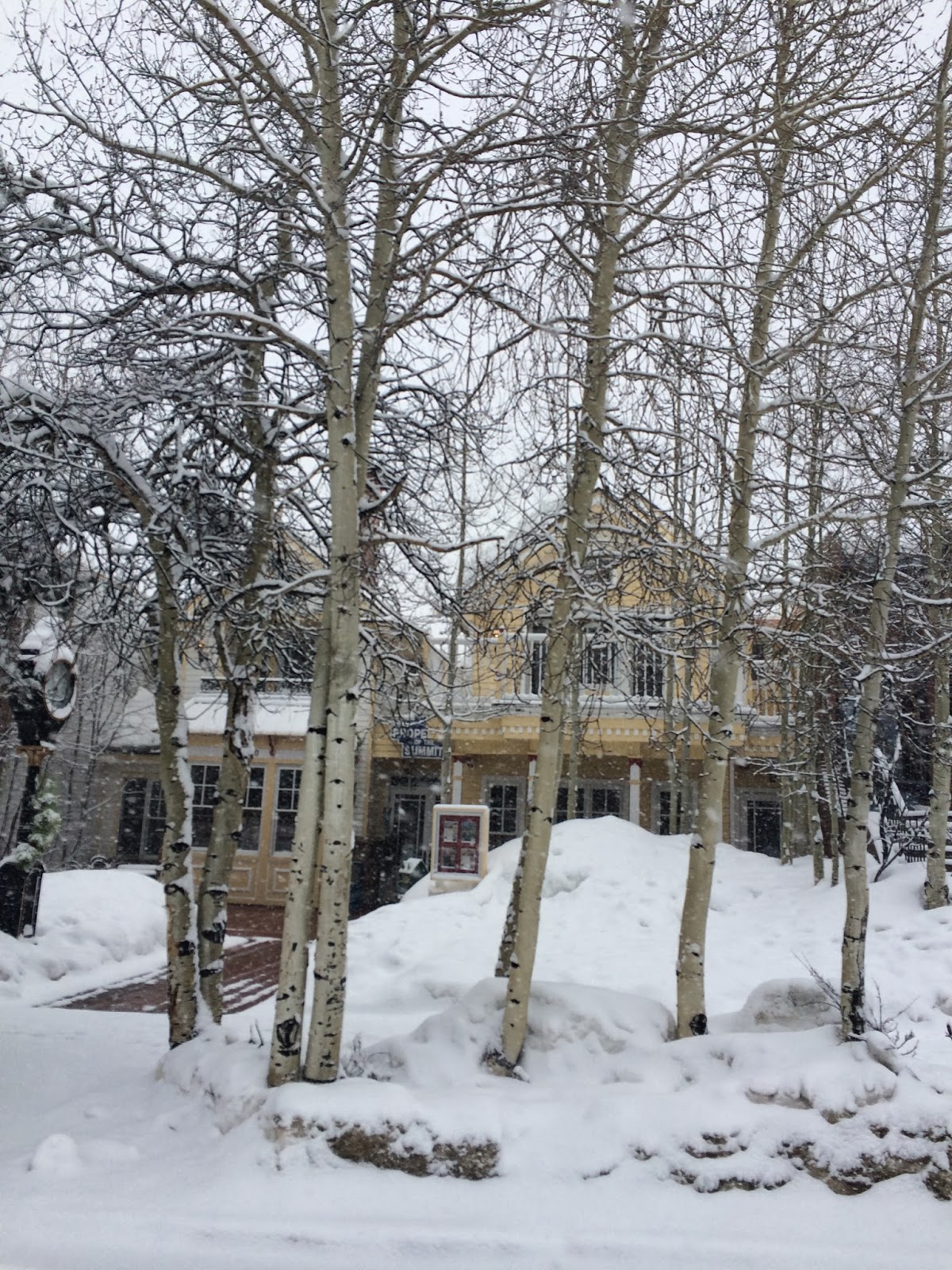 I, personally, was in dire need of a good cup of coffee.  We dont' have a Keurig in the condo.  That, to me, is like roughing it!

A local told me about this cute little coffee shop called Clint's, and they had the most unbelievable cup of salted caramel mocha that my lips have ever touched. 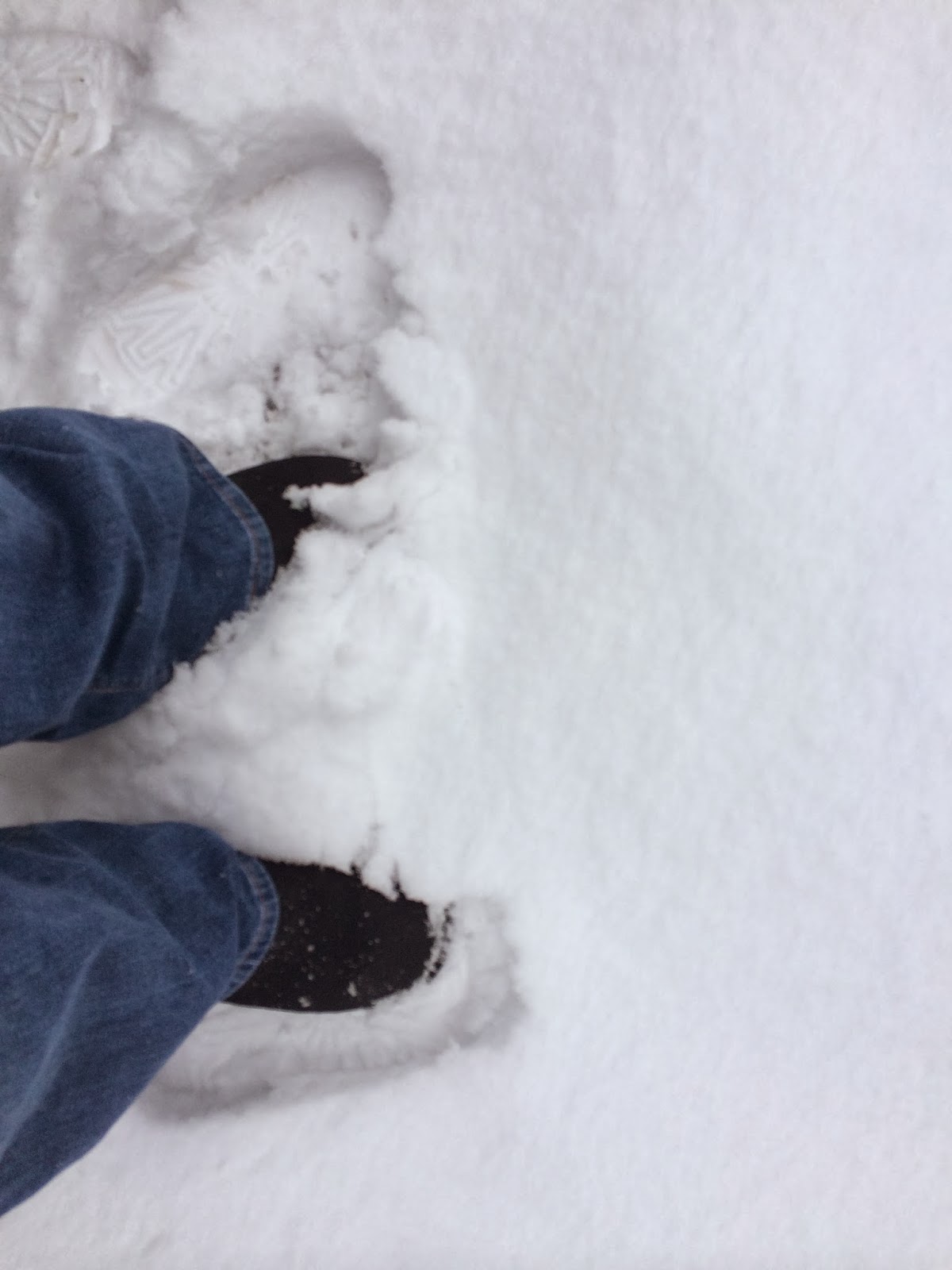 Todd is so loving this snow.  It is where he says he feels the most at peace.  (Not me) 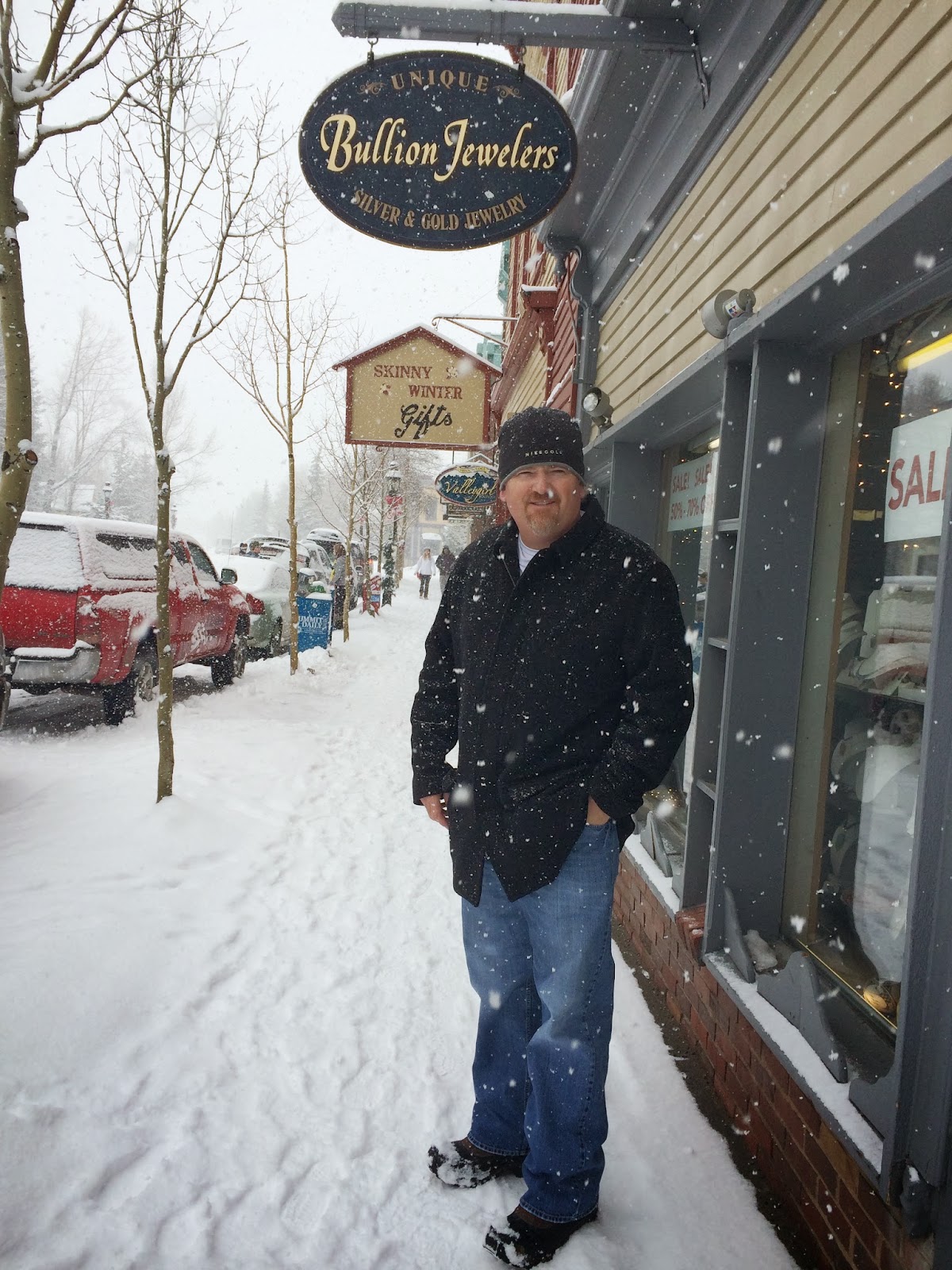 And on this particular day, the weather was pretty rough.  At times, the snow was sideways.  I pretty much had already decided, when I looked at the forecast, that ol Mel wouldn't be going out on the slopes on this day. (I was wrong!  Todd the Bod is persuasive) 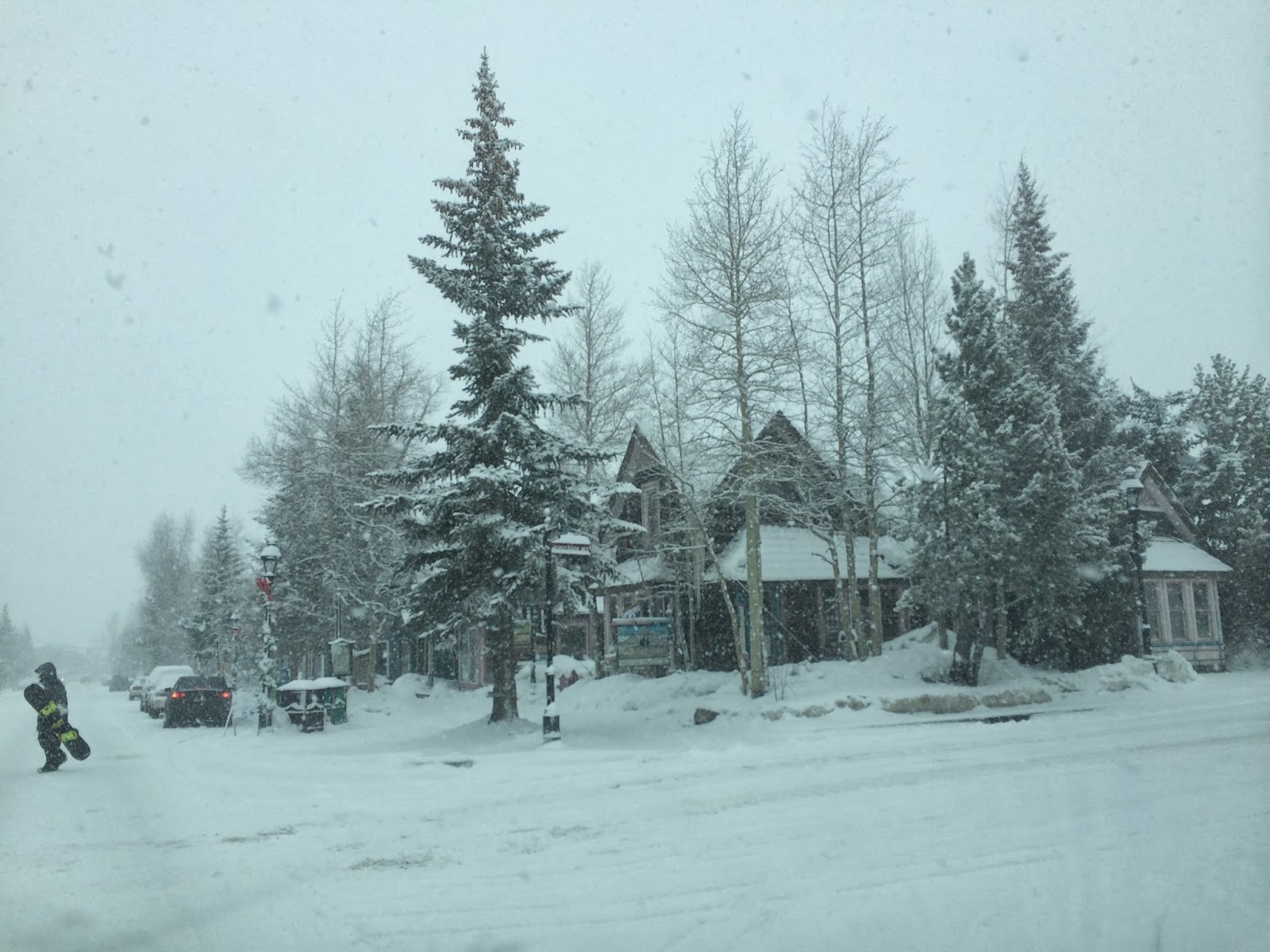 Any way, as bad as it was outside, we'd already signed the girls up for Snow School. 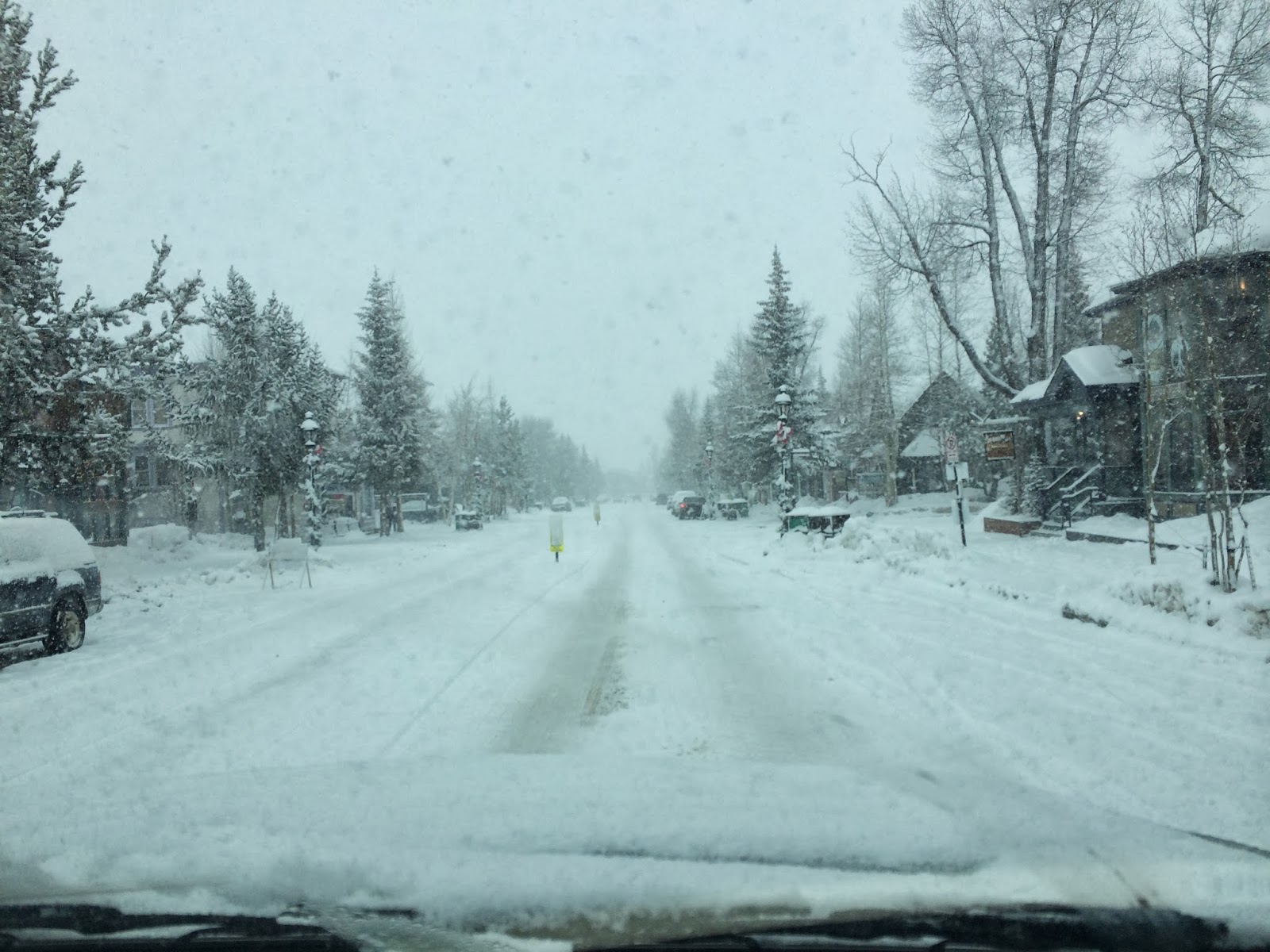 And as I fretted because I dropped my babies off in this weather, Todd never looked back! 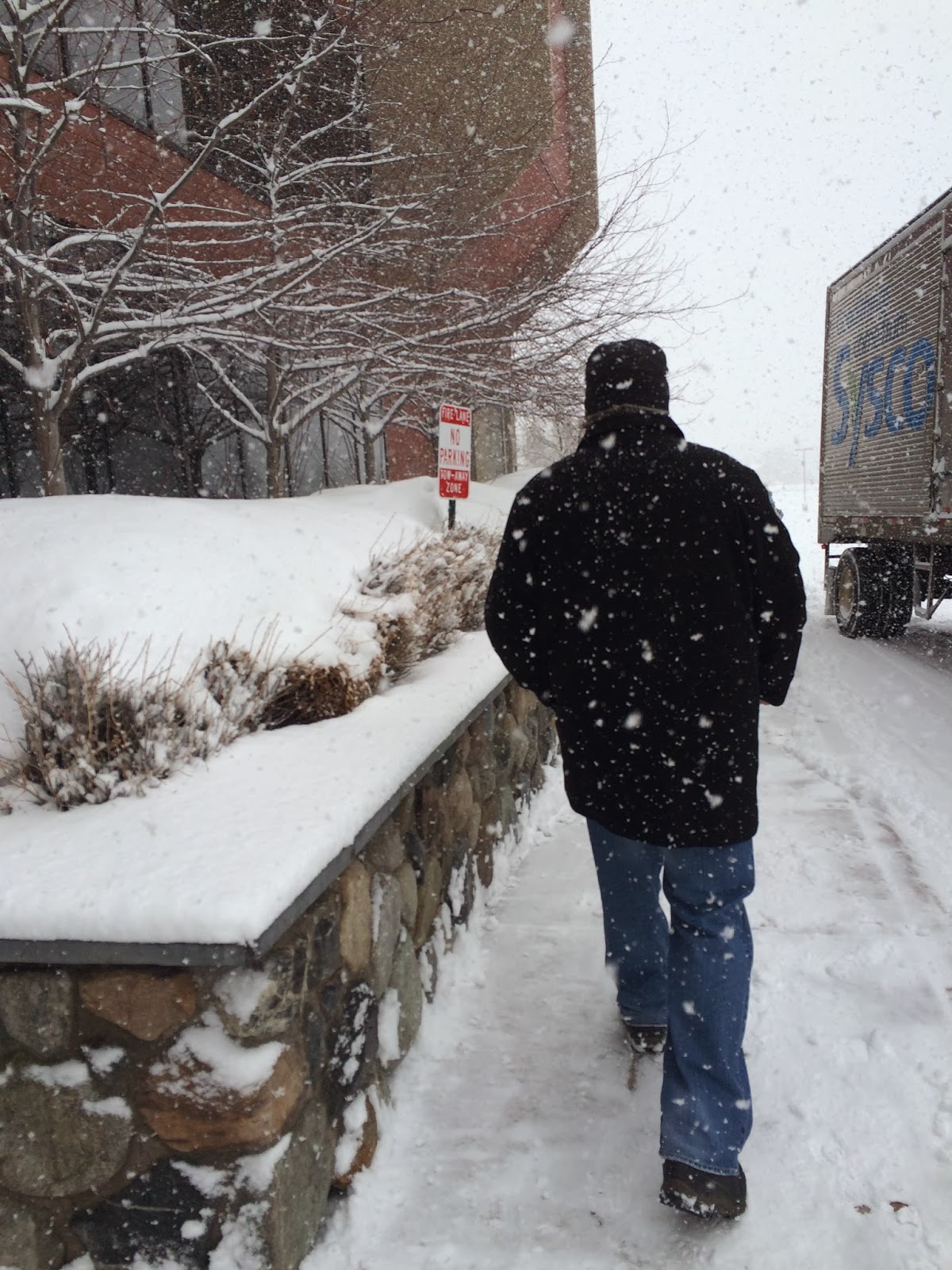 He had some skiing to do.  I think maybe he thought this would make them tough!?  ha. 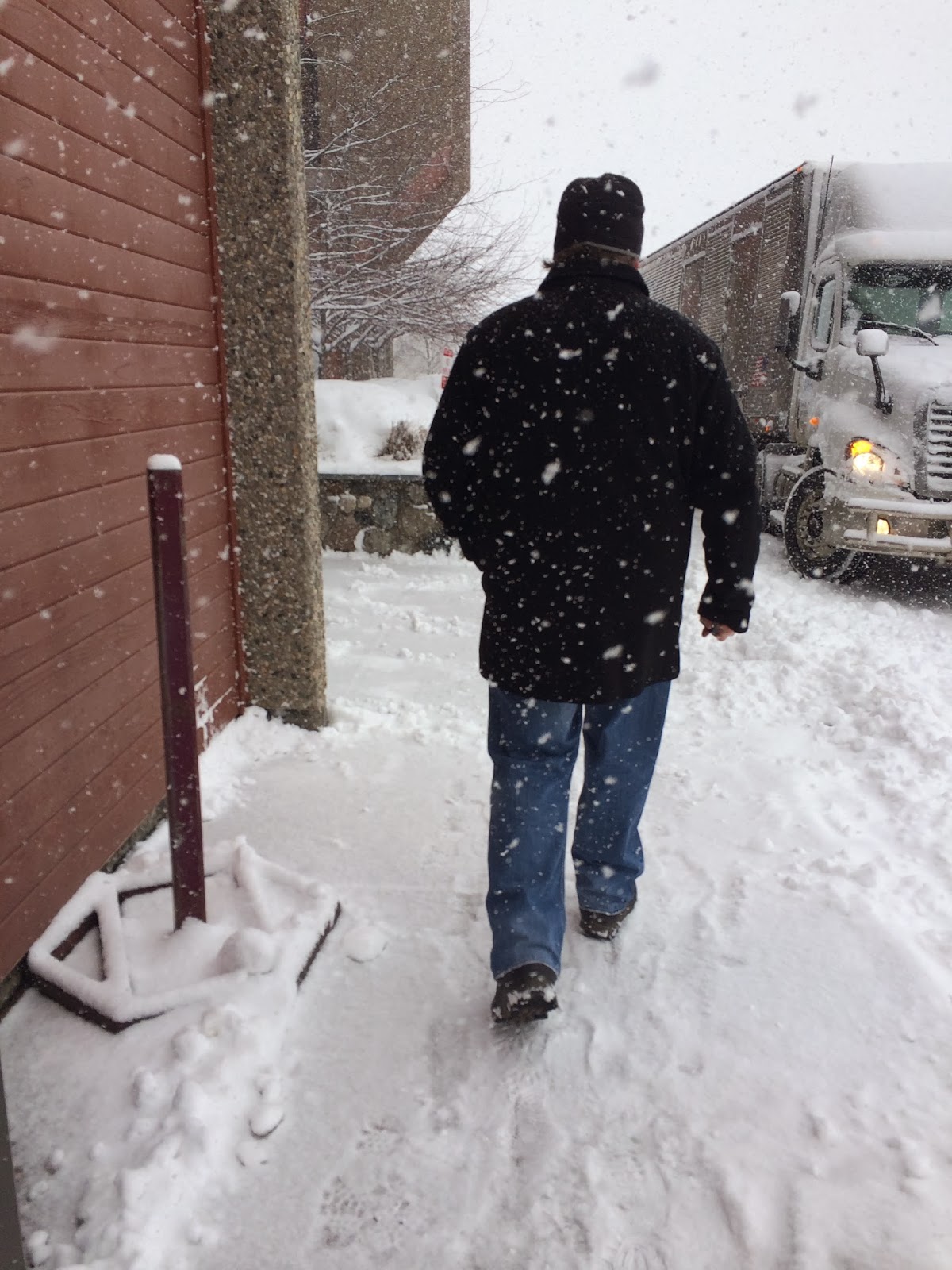 The girls went on in like pros.  However, as the day wore on, I got a couple of calls.  Gabbi Girl was NOT digging it. But they had movies and coloring and snacks, so she lived. 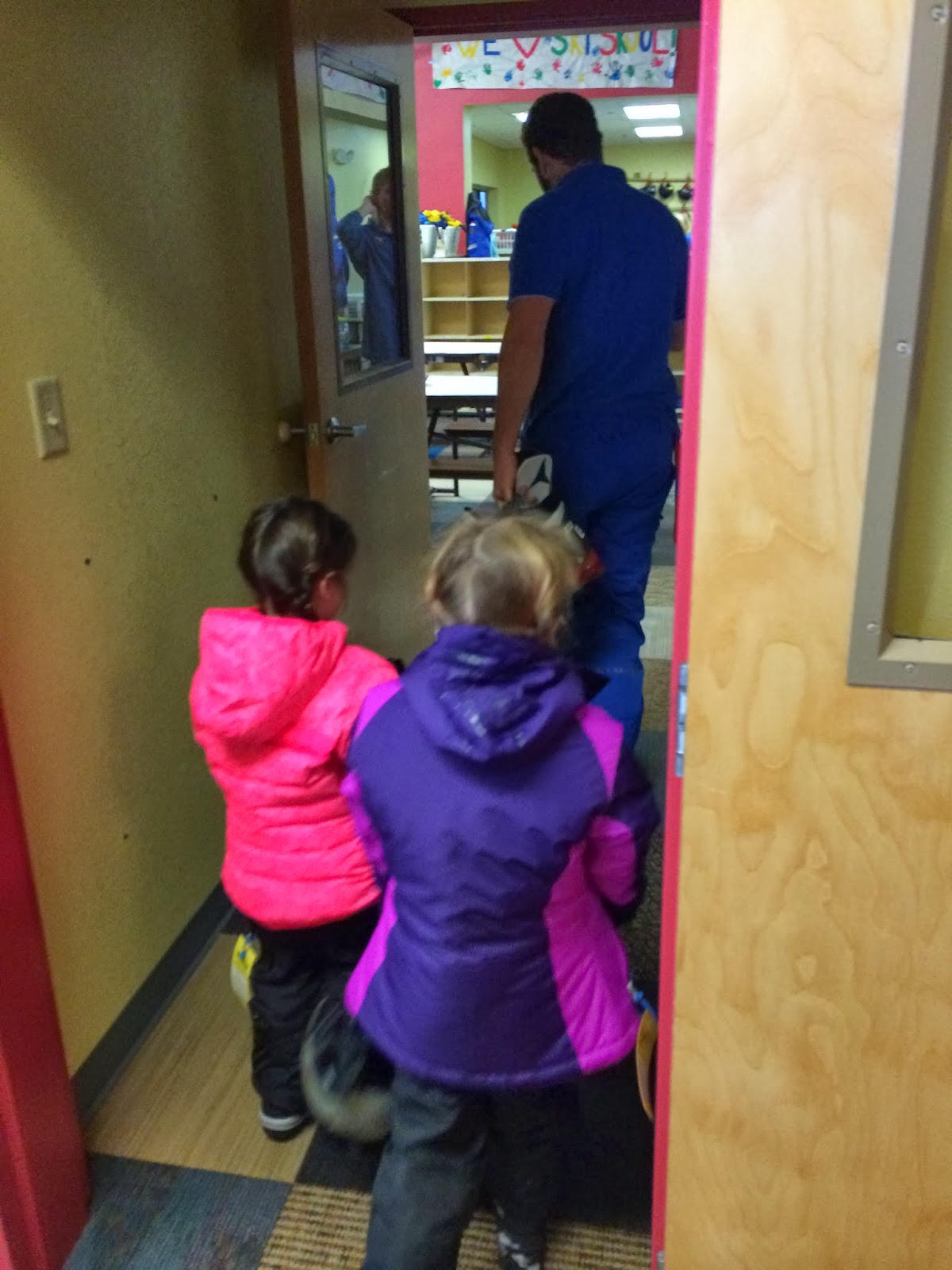 They'd started out all fired up.  Holding helmets and goggles and catching snowflakes on their tongues. 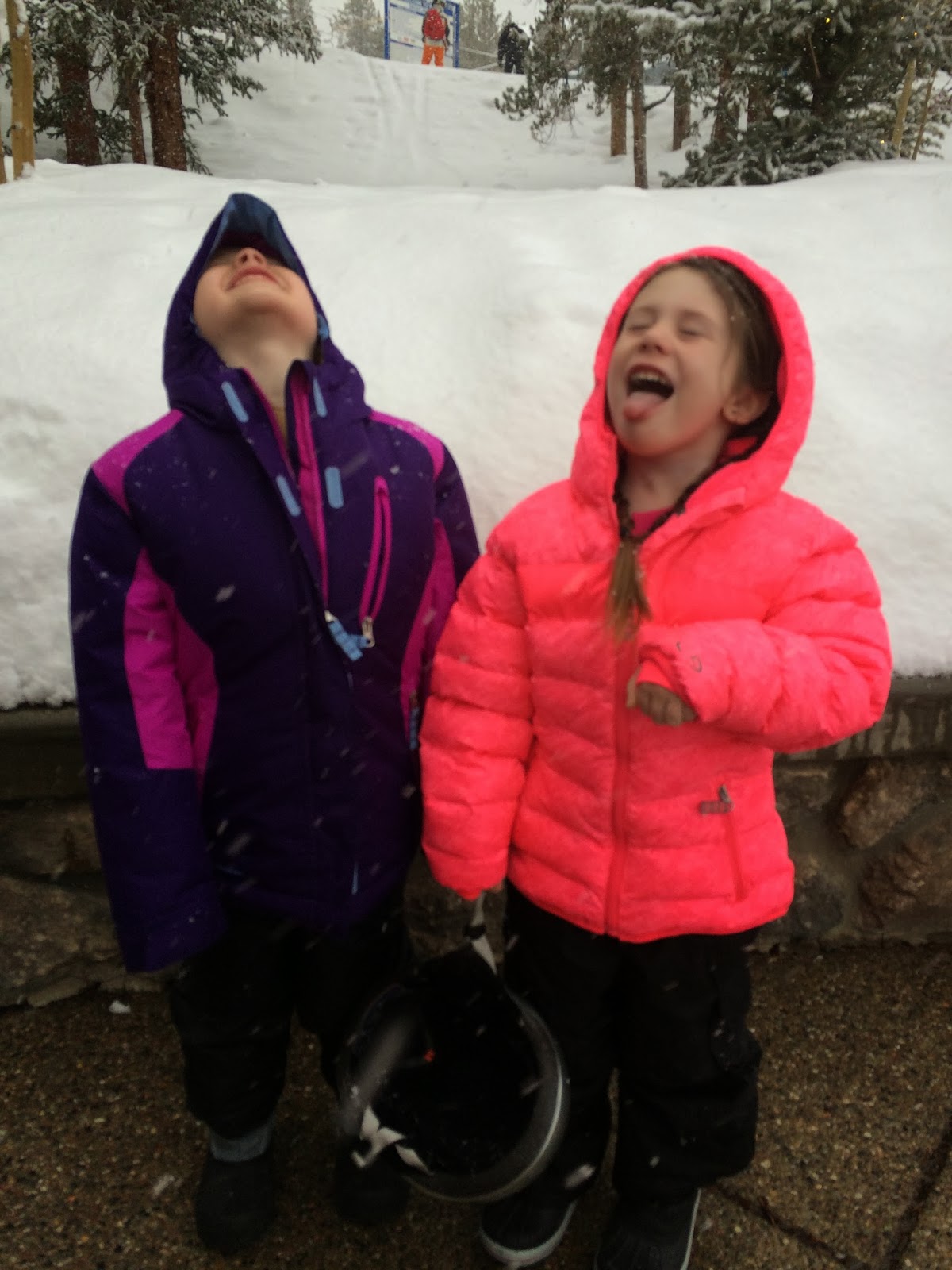 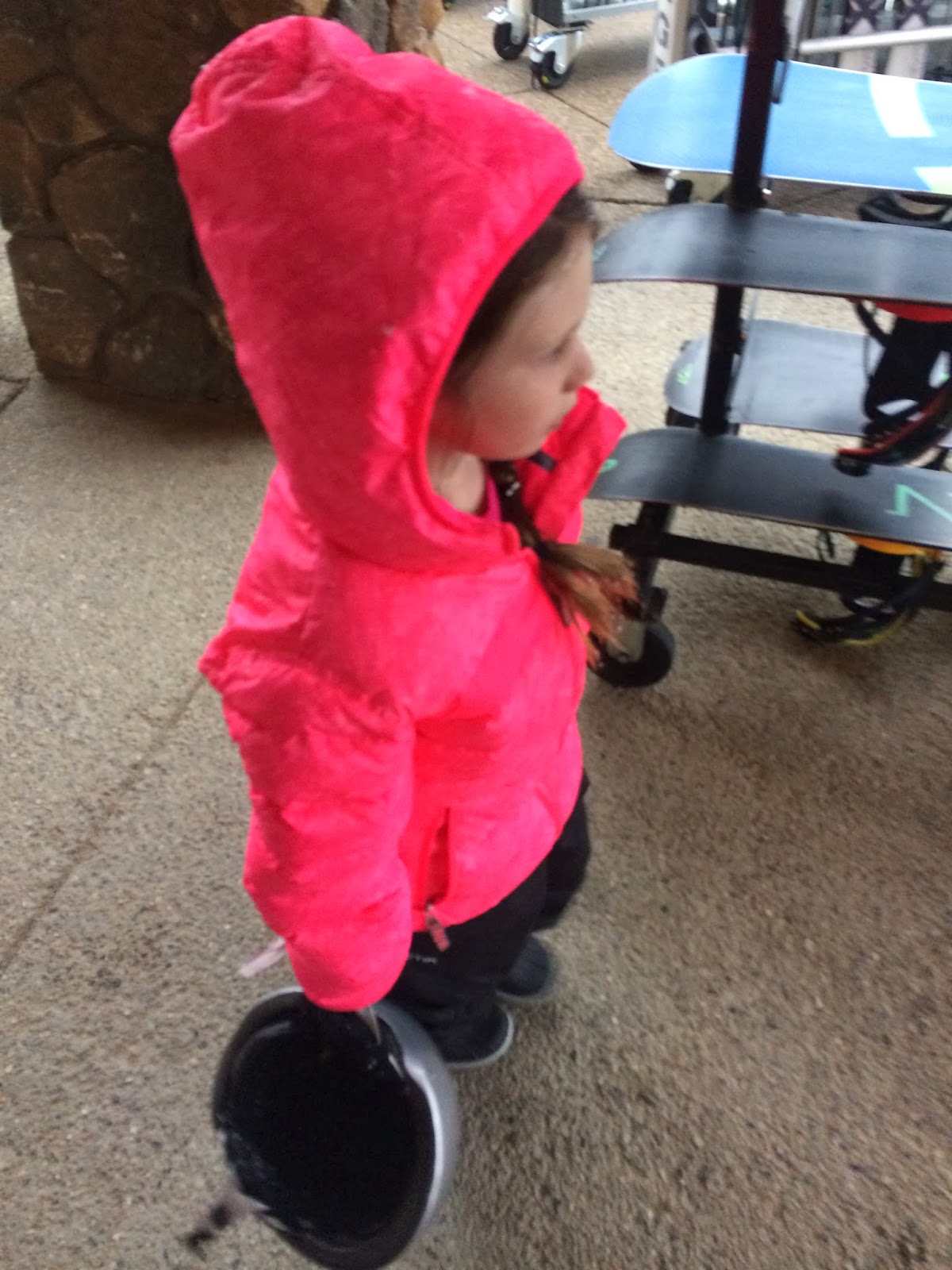 They didn't know what they were in for really, but I am proud of my little warrior princesses for getting dressed and heading out into the unknown anyway. 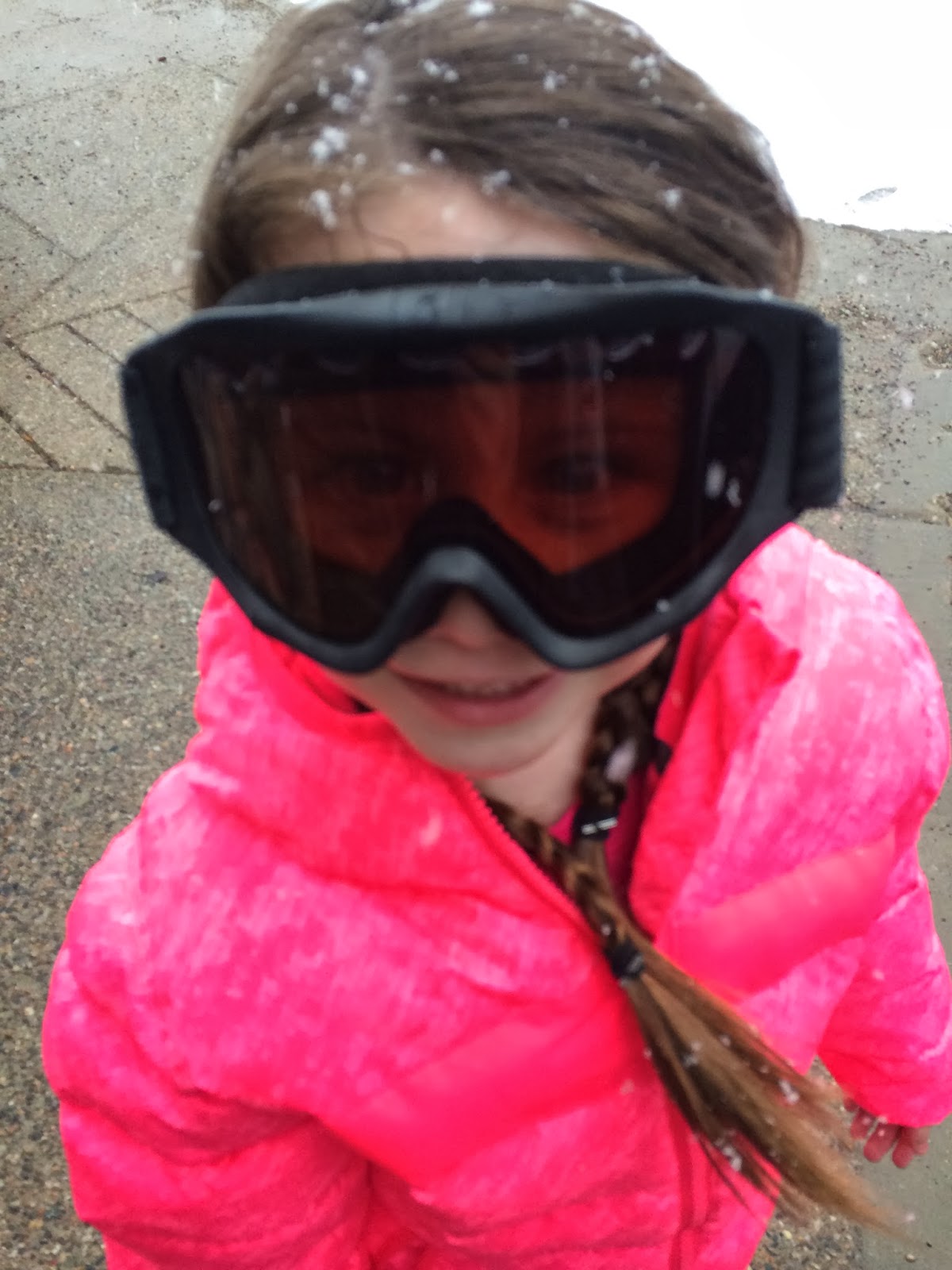 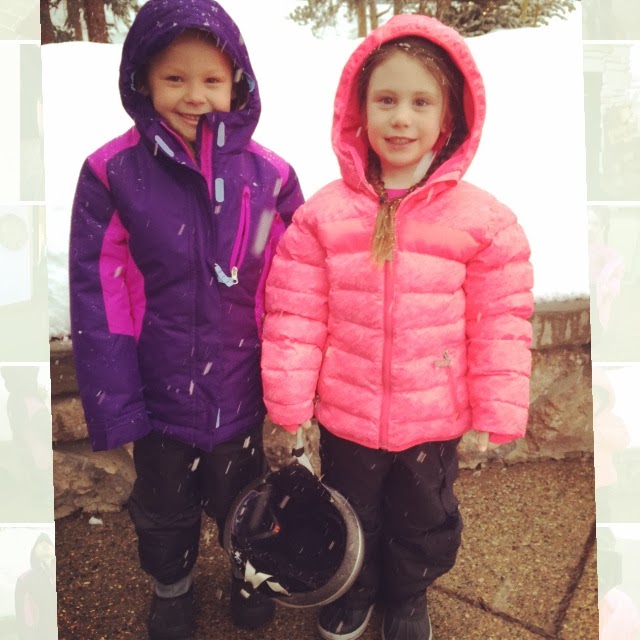 Look at this weather!  Gabs is almost always about 50' behind.  She doesn't move too quickly.  Do any of you have "that" child?!  Gabs is mine. Not in a hurry for anything. 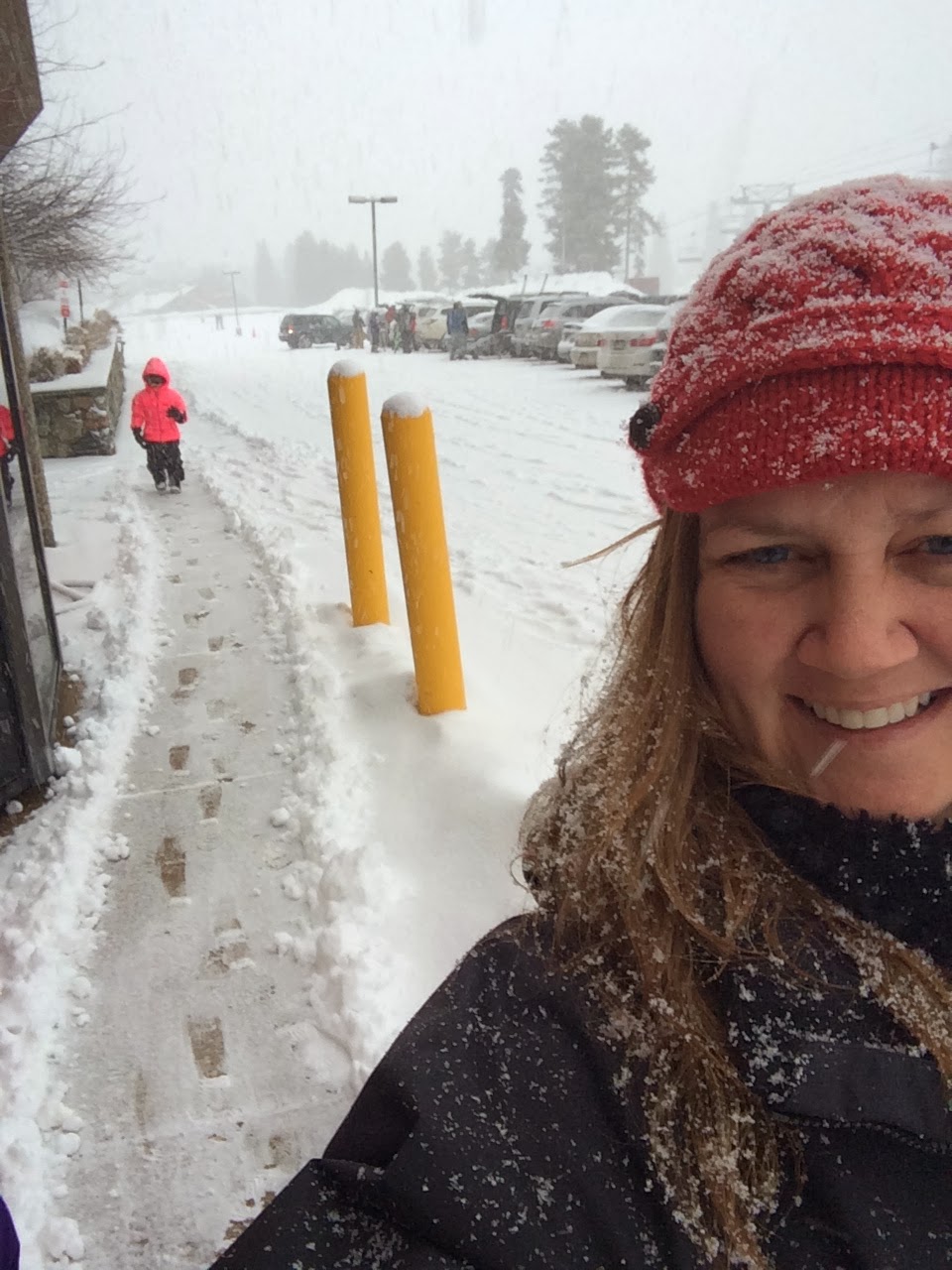 The ski instructors are definitely kid friendly.  They squat down and introduce themselves as if to be on their level. 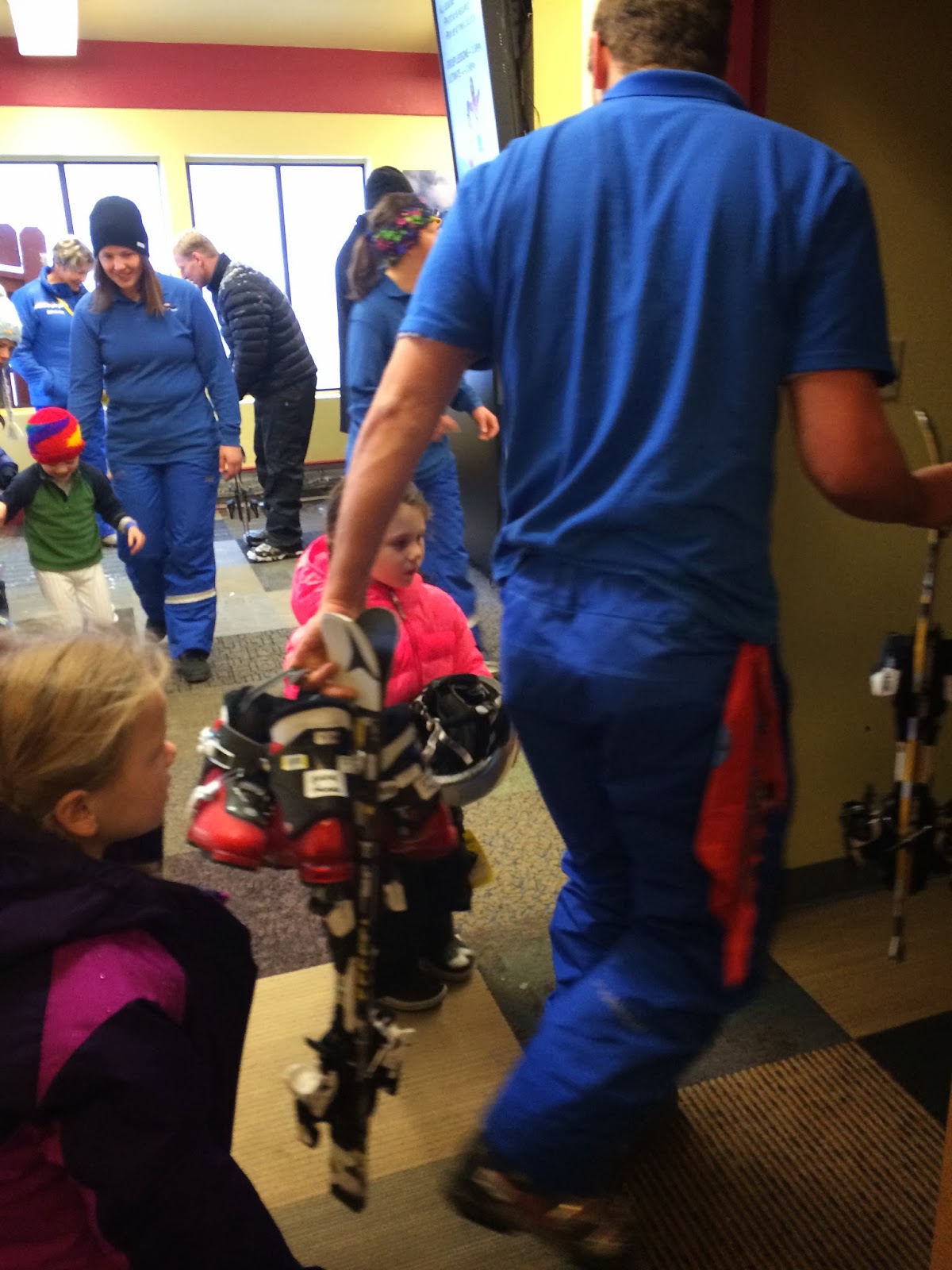 All in all, I'd say it was a semi-successful day.  The crew called me twice saying Gabbi refused to ski.  She was crying the first time, but I encouraged them to keep talking to her and trying.  The second time they called, they just said she refused to go ski, but was in the daycare with the 3 year olds watching cartoons.  I said, "Fine!".  This would prove to be the ONLY time that Todd and I were able to go to town and ski a little by ourselves. 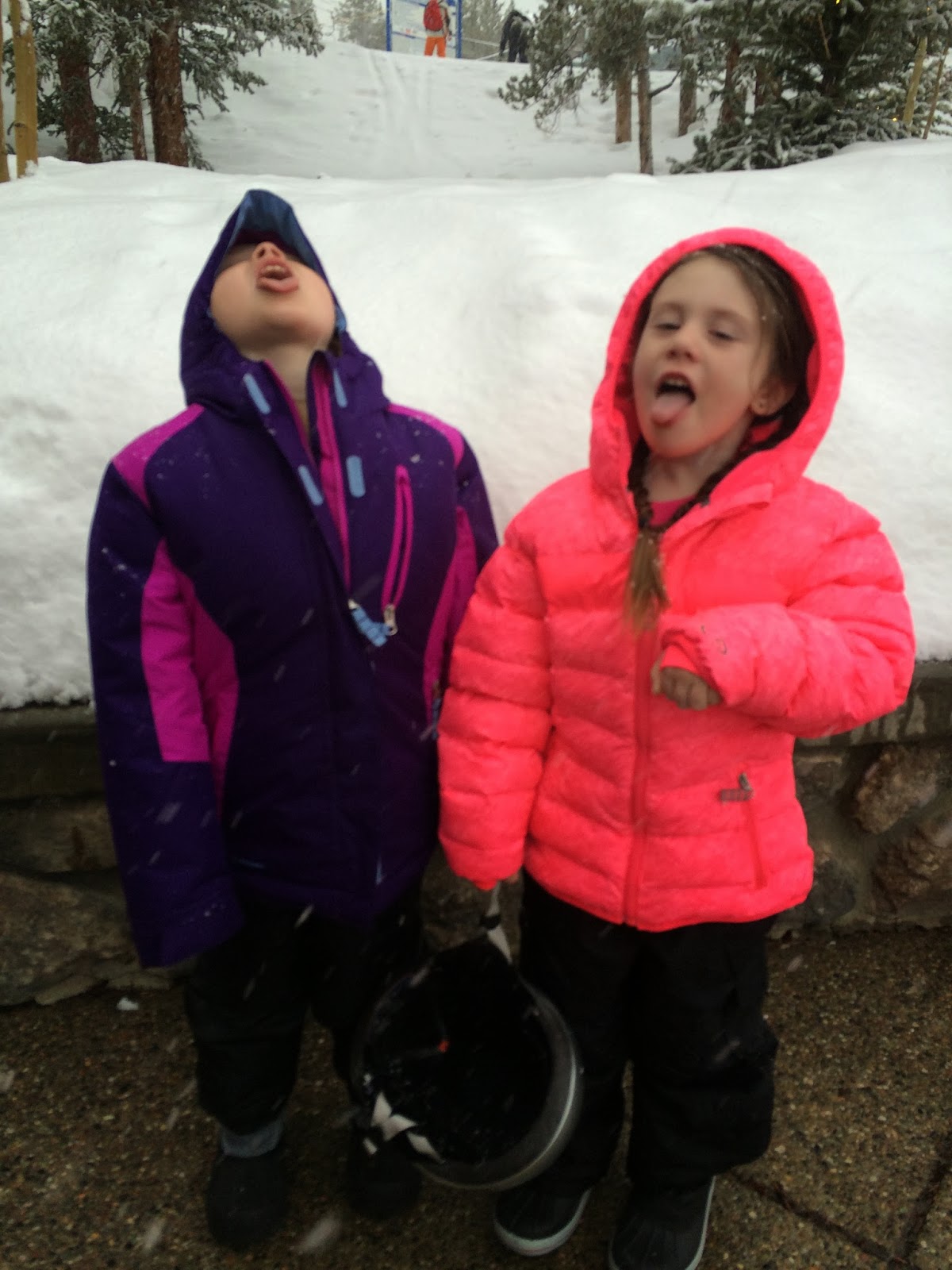 By the time we go there to pick them up, Gabbi had her skis on and was out on the bunny hill, helmet and goggles and all.  I am so glad I resisted the urge to go on the first call! 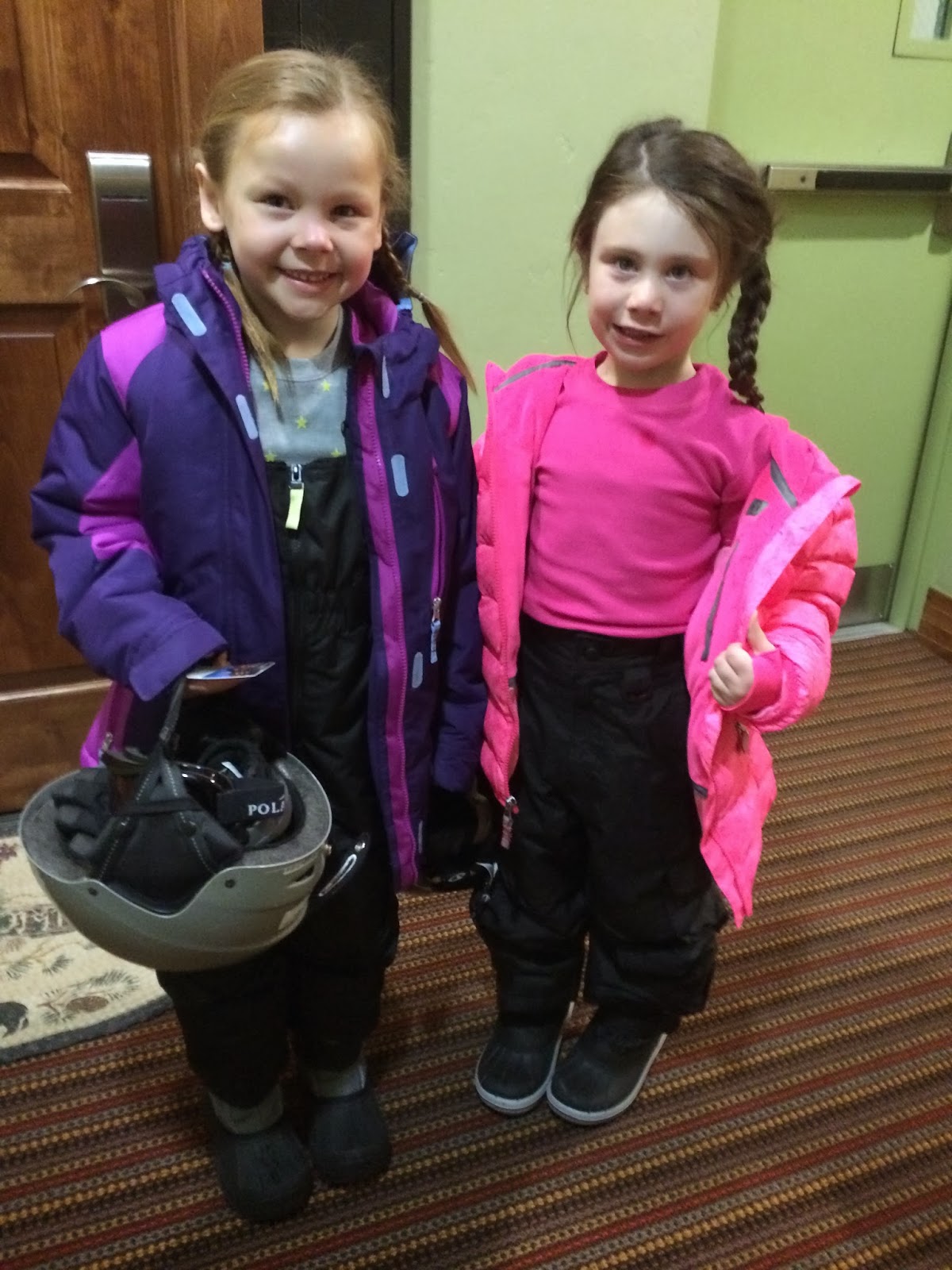 And since then, BOTH girls have been up on the chair lift and skied down the mountain several times, with the help of their very generous daddy.  That was NO small feat!! 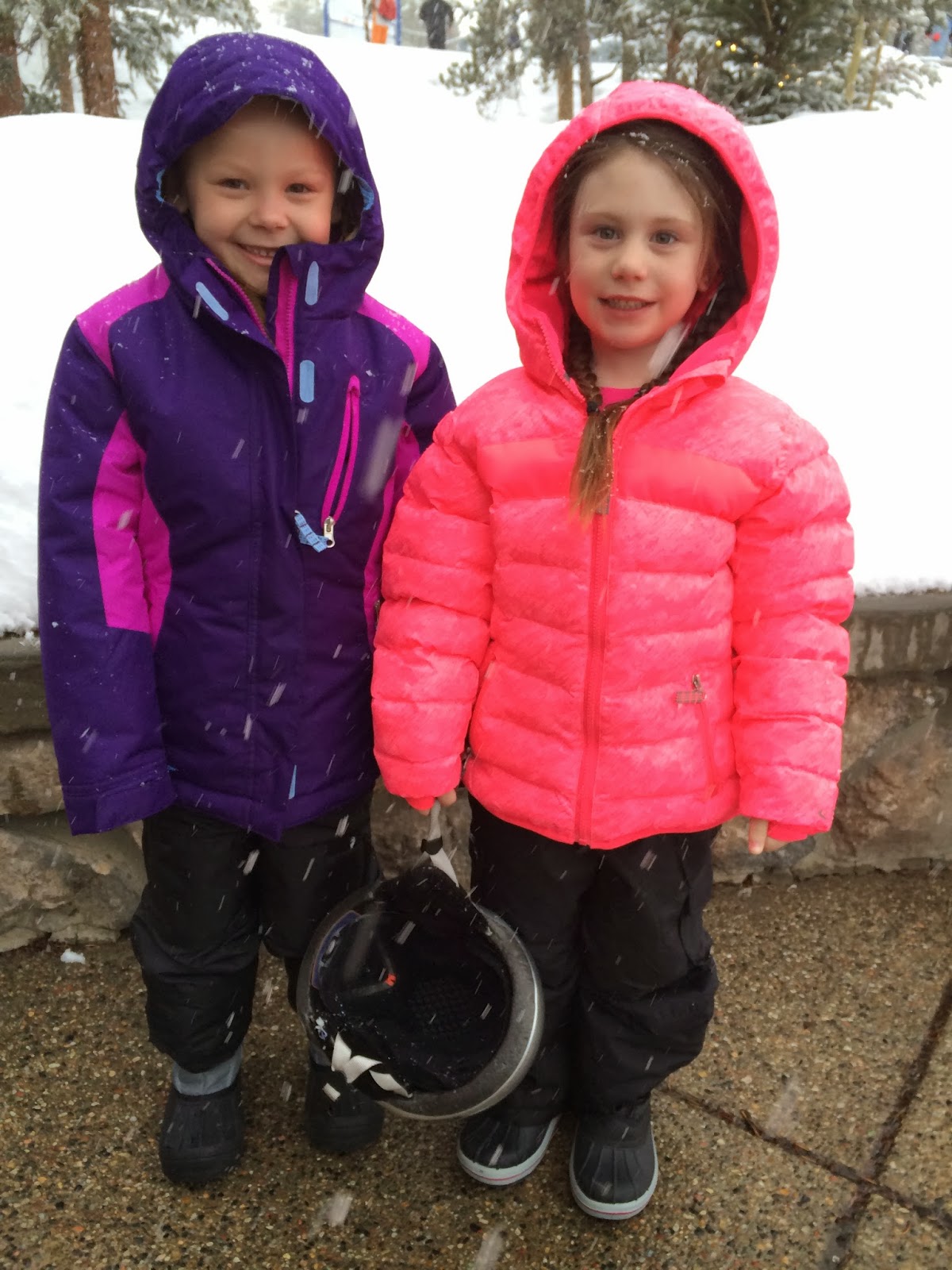 This little turkey right here is now going down the mountain all by herself.  She has got it going on!!  She's almost too brave.  Ask her, and she's ready to take on Lindsey Vonn!  She even says, "Mom, I shredded that mountain!".  omg 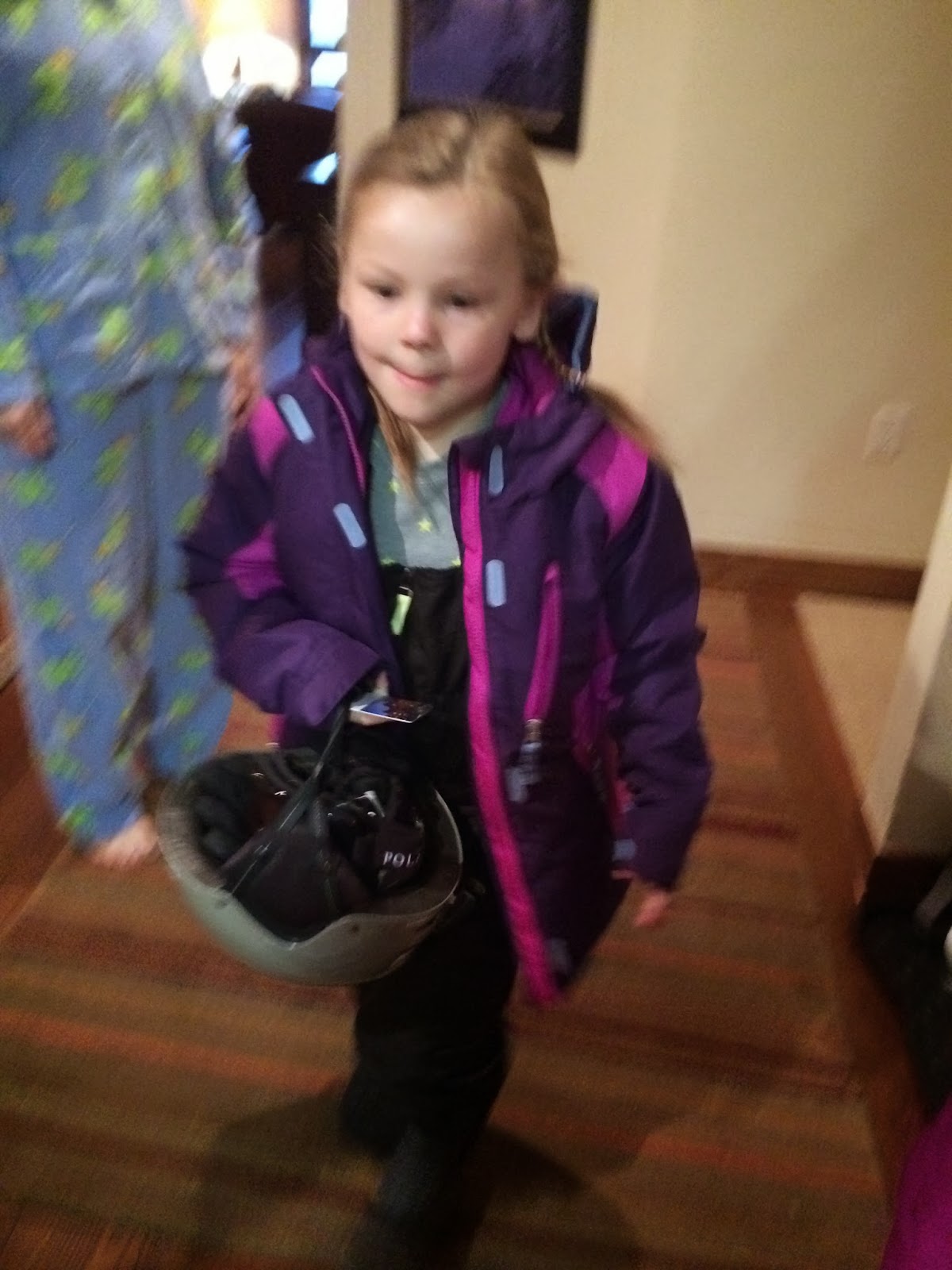 And this one LOVES to actually ski, but the hauling of the skis, walking in the ski boots to the lift, and wearing of the layers and goggles and helmets... ummm... notsomuch! 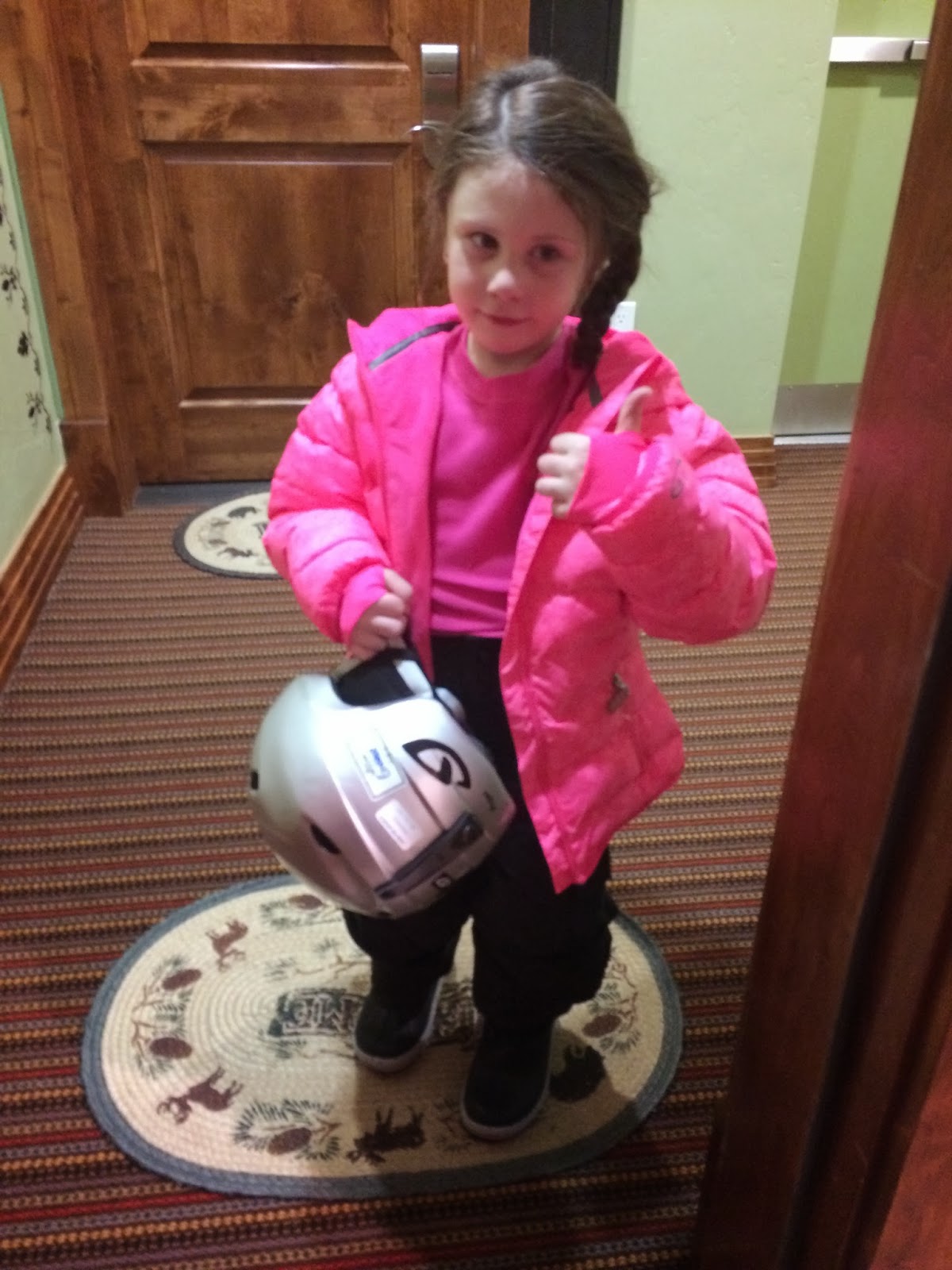 I KNOW Miss Snow Bunny is heading out today, but the verdict is still out on my baby girl.  One thing is for SURE... this Louisiana crew will be celebrating downtown Breckenridge at the Mardi Gras today at 4:30!  Yessirreee... let the good times roll!!

And congrats are in order for Joleen who has bingo'd.  She's been contacted and has a choice of prizes.  But, for fun's sake, let's keep going until blackout!!  Today's number is...J-40.   Good luck.
Posted by melanie, aka Mo at 9:47 AM

Proud of Gabbi! I didn't have any doubt that Ellie would think twice about skiing, or trying anything for that matter!

It looks like the cutest town and the snow is beautiful but I don't think I'd enjoy being that cold :(

Can you put together a list of all the numbers because I swear I don't feel like I have seen very many.

I've said it before, anything Ellie Sue puts her mind to, she WILL do!
Gabbi did an awesome job too, as I saw on Facebook!

It is kind of eerie at times how much our daughters are alike. My Brooke fit Ellie to a tee- afraid of nothing, sassy and into whatever the teenagers are. Jacie (my younger one) is very much like Gabbi - kinda stuck on my hip most of the time, she is THAT kid you were mentioning who is 50 feet behind the rest of the gang. And a bit ... well... lazy? For instance... she would NOT walk up the hill carrying her equipment. In fact, she would want carried :) I love it, I wonder if there is some "birth order" similarities going on here :P

thanks for taking me sking! I am not a "cold weather" type so I enjoyed my trip here nice and warm. Becky

Yay for going forward for blackout, even though I still only have two numbers! I'm really enjoying all the snow pictures.

Sounds like Ellie and Gabbi are doing really well! You and Todd are giving them wonderful life experiences and memories...so awesome!