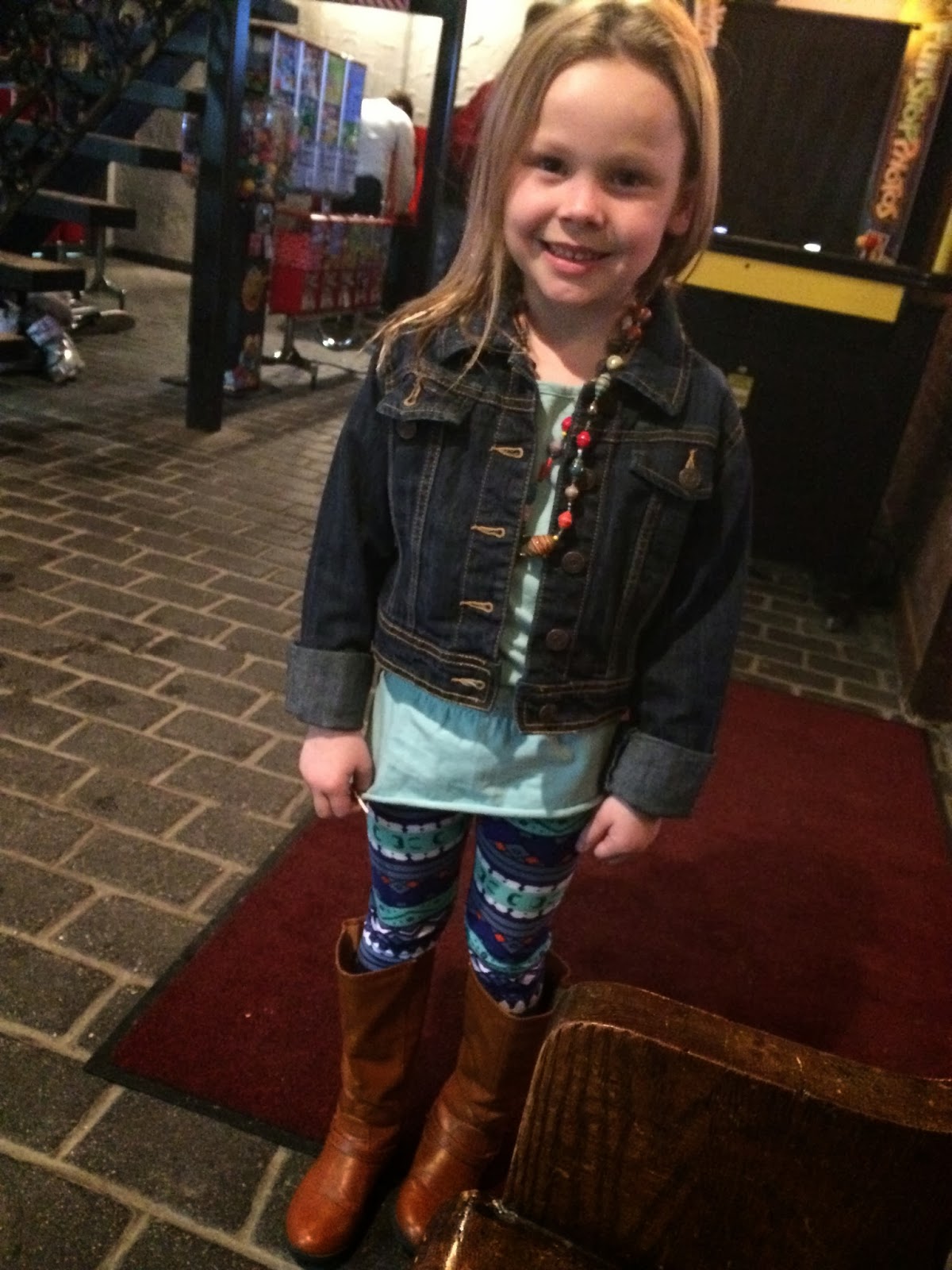 I don't think that Breckenridge is at its busiest, but nor would I exactly call it "slow".  But, trying to get into restaurants is a doozie.  Everything is packed.  Once the slopes are closed, there is just not a whole lot to do, so the little town comes alive! 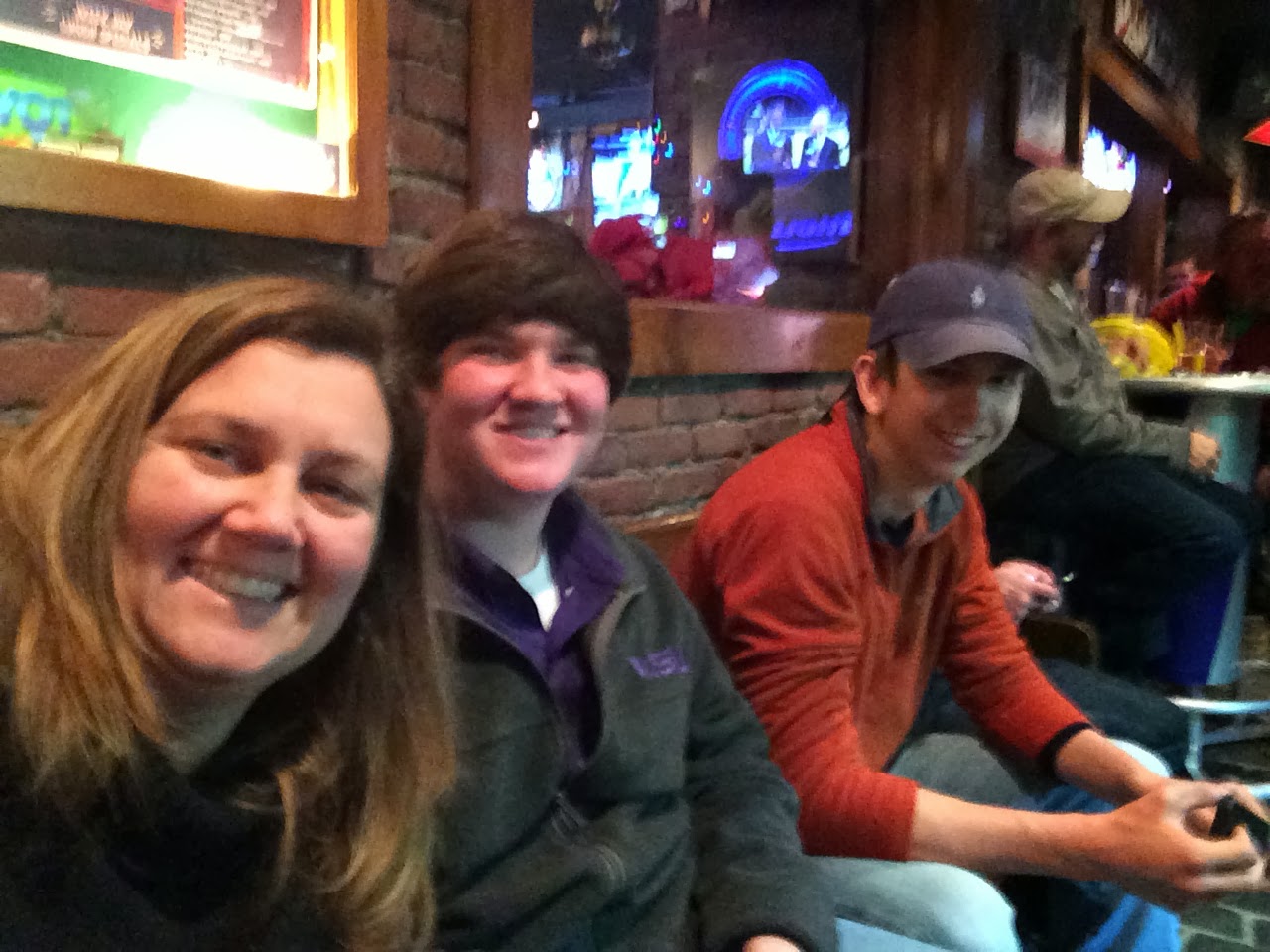 We popped in a local favorite, Eric's, and found our friends who are here from West Monroe.  My friend, Tashia's, husband and son, Hunter (above in the gray) as well as her nephew Garet in orange, are all here, and staying directly across the hall from us.  That, strangely, hasn't meant a whole lot, as we are all going in different directions!  Tamy, Garet's mom, is also my friend,... just for the record!

Anyway, the point is, is that it was strange to run into them on this first night out in Breck. 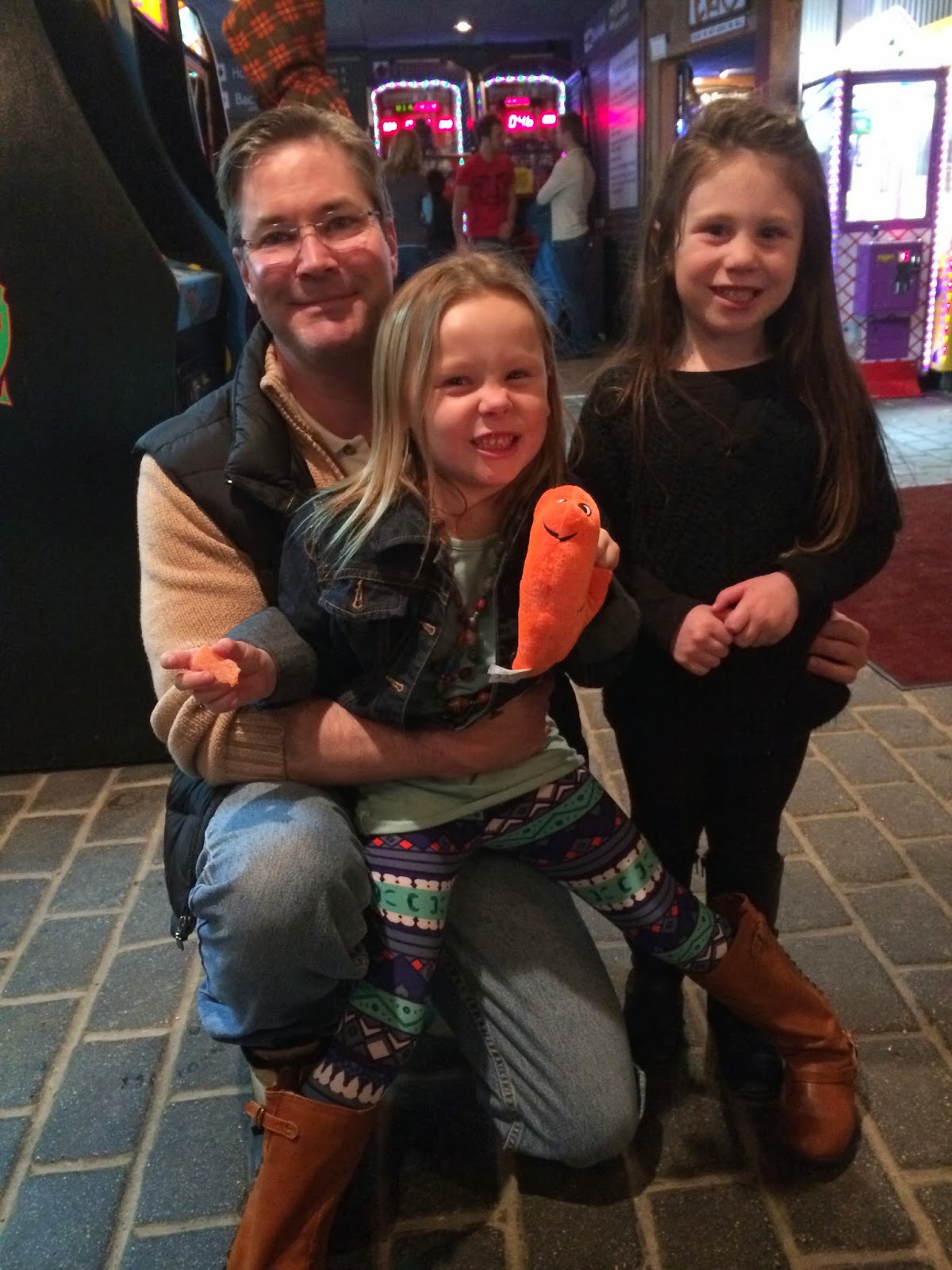 Uncle Scott (Todd's brother) lives near Denver, so he drove up to hang out with us for a few days.  The girls loved having him around.  Especially in an arcade, where his quarters spent as well as their daddy's did! 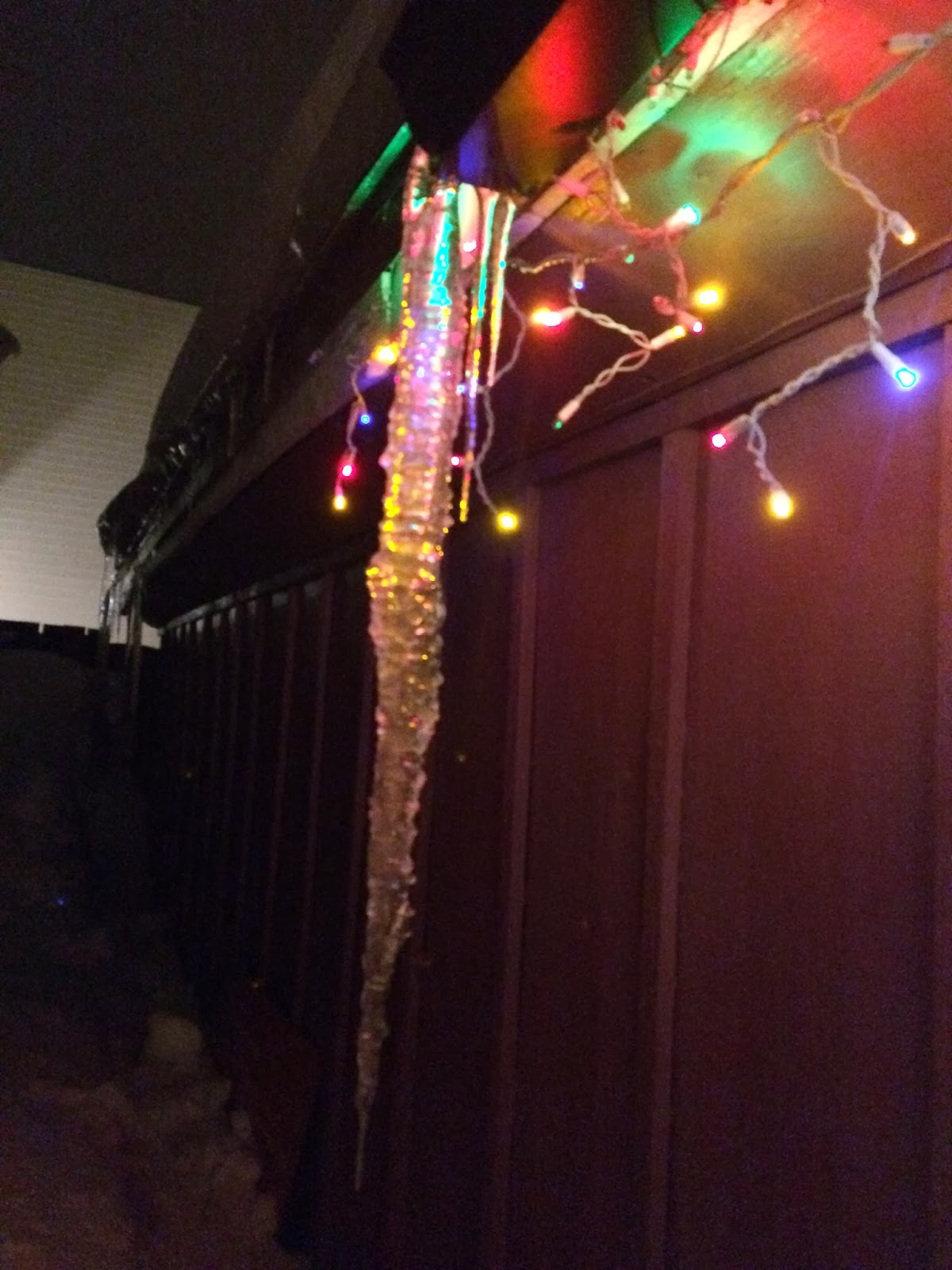 There have been icicles taller than Todd.  Just sayin. 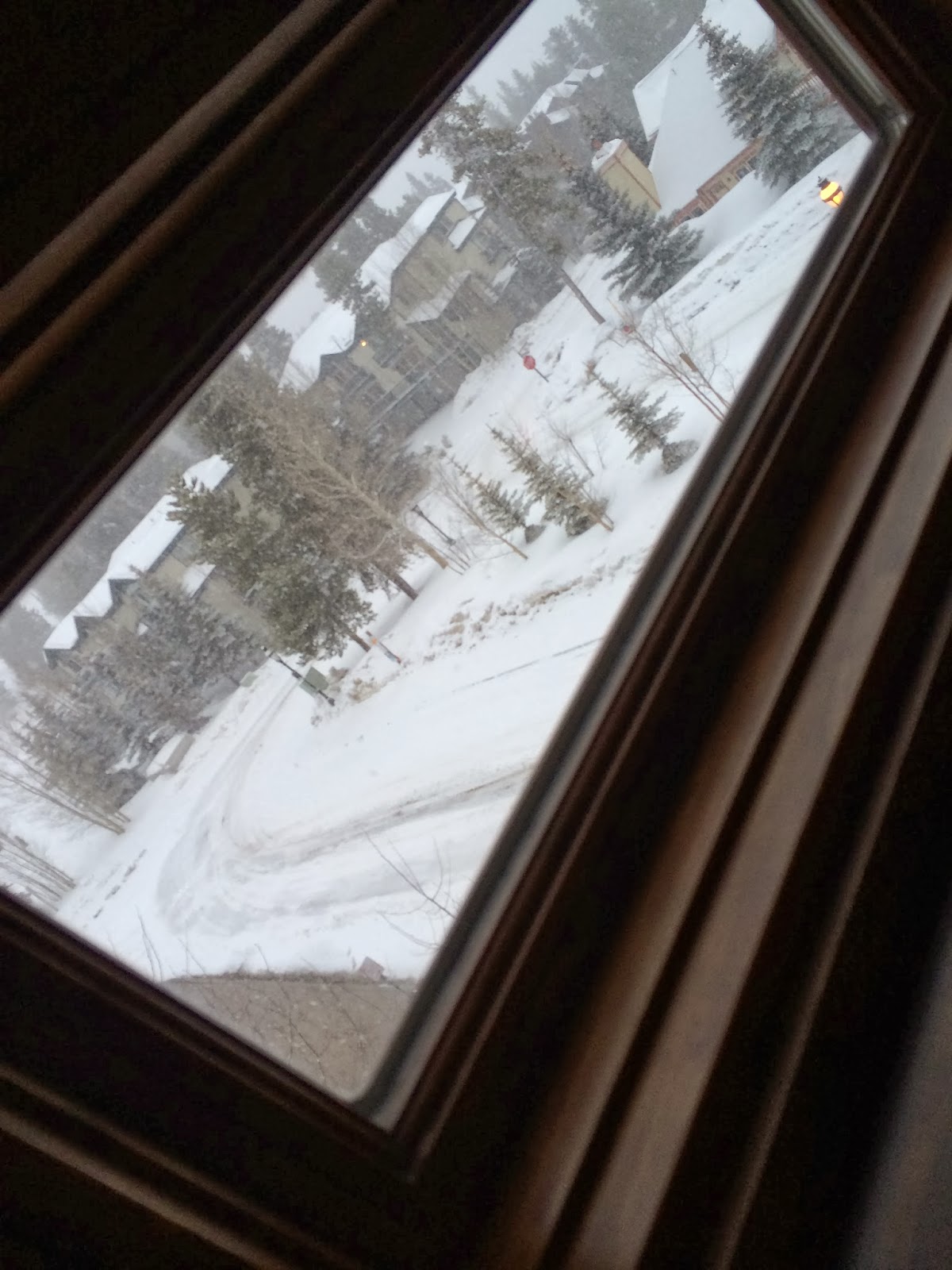 And on the first day of official snowing, we were experiencing a "white out" at certain parts of the day!  I didn't think there was any way in H...L that I would be going out in that.  Especially when there was THIS ... 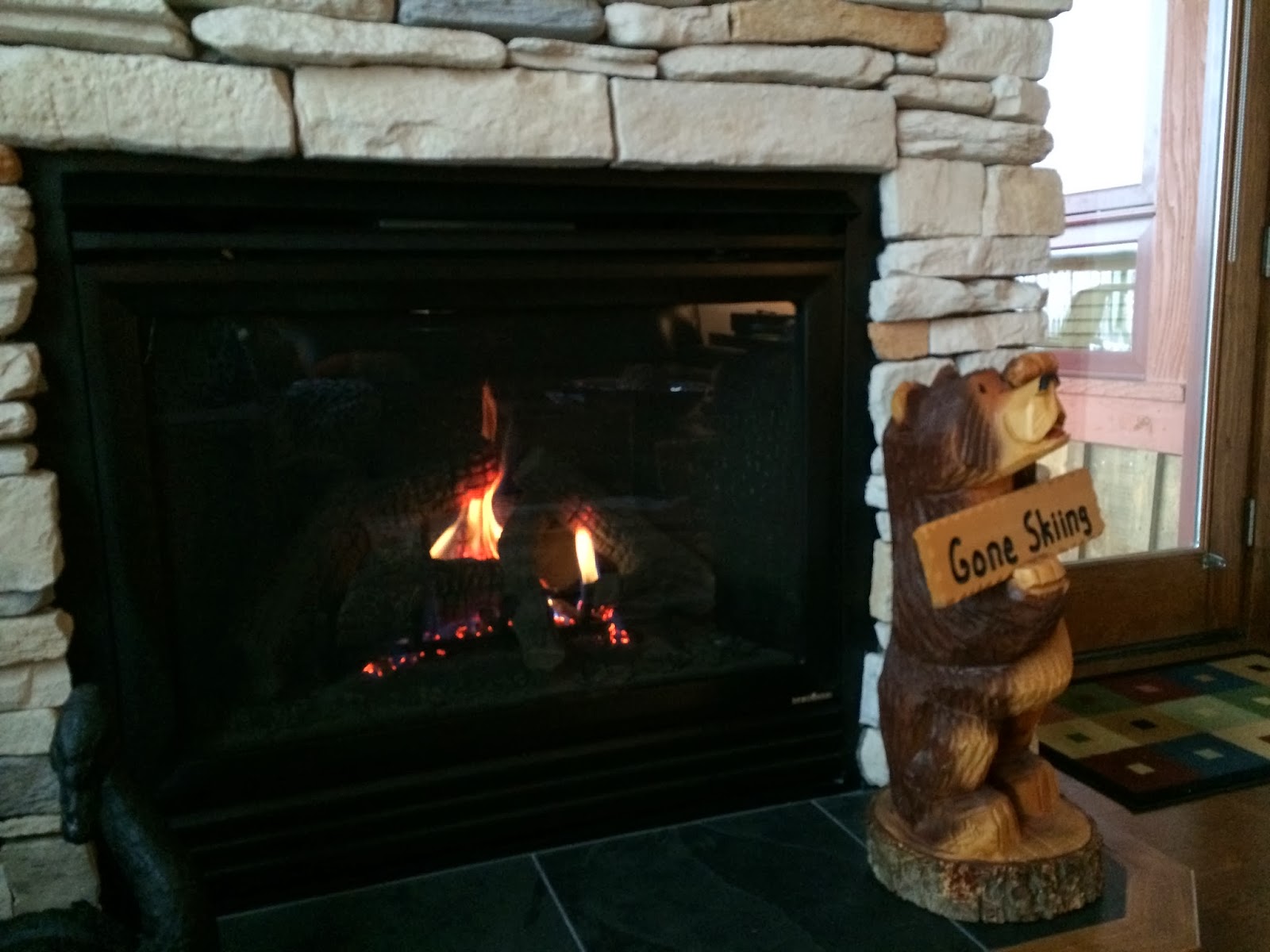 I was sitting here by the window, in front of the fire, looking out, and watching the family learn all kinds of technical stuff on their phones.  Poor ol' Uncle Scott got used in more ways than one!  But look out... Granddad can now Instagram! 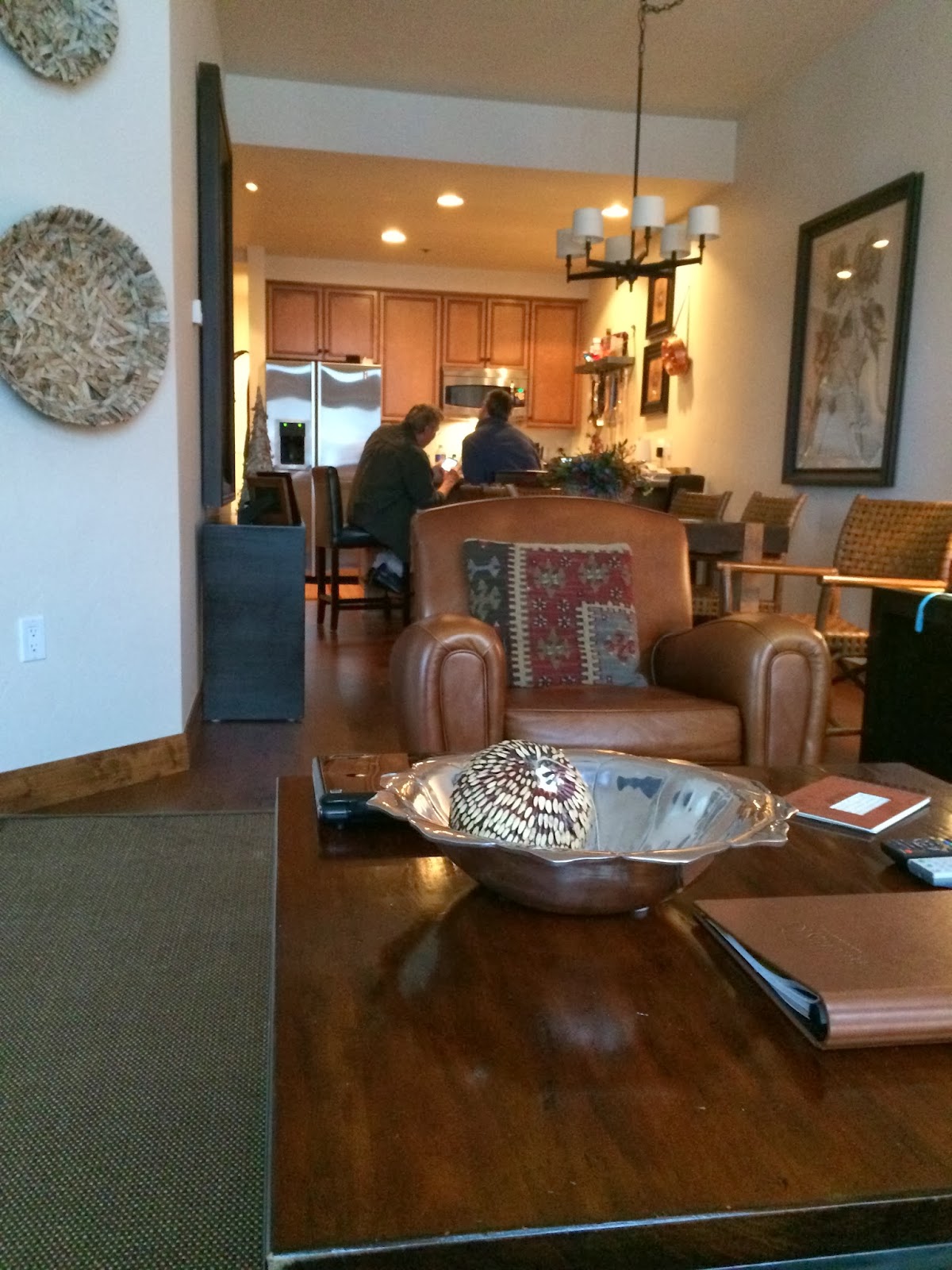 As it turned out, I DID go out on the slopes.  I hadn't been on skis in almost 6 years.  I was a nervous wreck.  There is nowhere to "practice" before jumping up on a lift and skiing the WHOLE way down.  So, it had better just come back to you and come back fairly quickly.  The good news... it DID!

Keif, from my office, sent me Bingo letters.  Unfortunately, he took a photo of the board, and in the pic, there were two numbers.  So one of them was pulled in the past, and one is the most recent.  I think I know which is which, but not positive, so here ya go....
Mark either one of these should they be on your board!!
Y-71 and 72
Anyone Bingo yet?!

Just skimmed the photos. Have to go put my girls to bed. But, I can not wait to read all about it.

Looks like a cold, but happy time in Breckinridge. I'm lovin' the pictures, on your blog and on Facebook...keep 'em coming!

Stay warm! And enjoy the memories.
Looks like Ellie is LOVING it.

Yes! I have Y-71.
Looking forward to hearing more about Ellie's adventures!

Love the pictures. Snow is a beautiful thing... for a little while. I think I would get tired of it if I lived where it was the normal thing. We are getting some ice here in North MS this morning. My son works about 45 minutes from home and he saw 6 wrecks on his way in. He said the highway patrol finally had to start "guarding" bridges so people would slow down. Thankful he made it safe and sound to work.

I have four numbers now! I am on a roll. ha ha

It looks beautiful, I was born and raised in Colorado, but live in TN now. I love the mountains covered in snow, so much beauty.

Joleen... Yaaaay!!! You prefer some MoJoy jewelry or a canvas?! Do you have a word of the year?!!