New Christmas tradition with a circle of friends 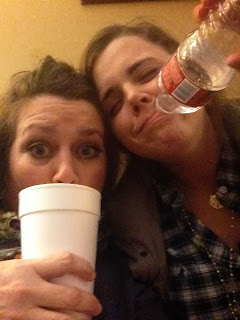 Here we go... end of the year, we have to progress through all the parties.  And I'm glad I have the pictures to prove I was there, because post-hysterectomy, I have been LOOPY and don't remember anything.  They say it is normal, particularly after anesthesia (which I had twice in 10 days), so I'll just go with it.  So, in a way, I am experiencing these parties right along with you!  ha 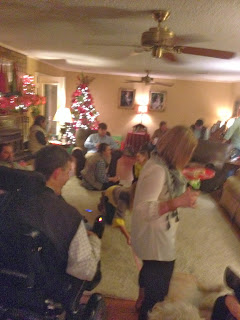 Mary Allison's mom, Pam's, best friend was Judy.  Judy is CoCo's mom, who has been to the beach with us and was Madi's babysitter.  For any of you who've read my blog for any amount of time, these names might ring a bell.  Anyway, Judy sort of has a role to Elaina, Mary Allison's sister, that I have with Mary Allison.  And because of that she has worked very hard to keep the whole crew together.  MA's dad, Jay, has remarried, and he is best friend to Eric, Judy's husband.  Still following?! 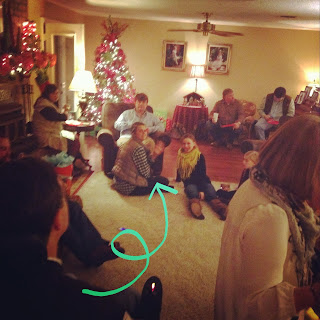 actually a long, detailed story for... Judy had a Christmas party and since we are now in their circle of friends, we were invited too!  YAY!  Bonus.  New Christmas tradition!!  I'm always up for a party!  Even the week after major surgery!  Let's do this! 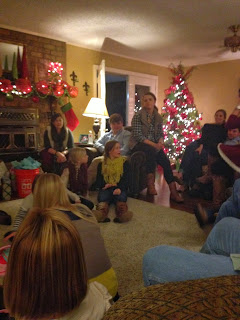 It was a dirty Santa party!  Hey, why don't I take this opportunity to introduce some of our friends?!  That's Todd the Bod in the doorway, with his good friend, Todd P.  Todd P. owns the golf course that Todd most frequently plays.  He is married to Judy's husband, Eric's, sister, Stephanie.  Oh. and while I'm confusing you... guess who else is one of their sisters!  KK's mama, Julie!!  So, there's Julie, Eric, Stephanie, and Jennifer.  But, Jennifer wasn't there, so you'll have to "meet" her another day! 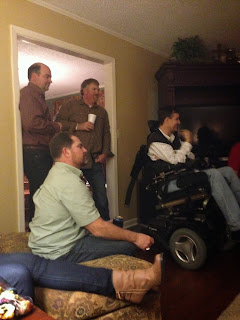 THat's Eric in the foreground on the ottoman.  They have two girls, as does Jay (MA's dad), ,so they have that common bond with my Todd.  Girl daddies!  And then there's Sam.  He's our friend who broke his neck several years ago when he was riding a kid's scooter, weered into the grass, it threw him forward and he very, very unfortunately landed in precisely the wrong way!  C5-6 quadriplegic.  He is also husband to Linda Lou.  And he, and Jay, and Eric, and Judy, and Pam all went to high school together. 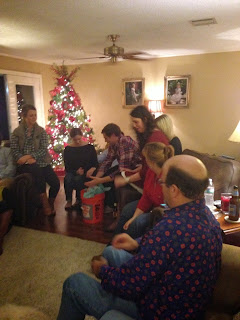 Let's see... old landing strip there is Jay, MA's dad.  He is sitting beside his new wife, Staci, who is a well known photographer around here.  She took some of the first pics of my babies when I brought them home.  The cluster of teens above him are MA, KK, Collin, who dates the platinum blond, Brittney, and Lauren, (Todd P's daughter.) 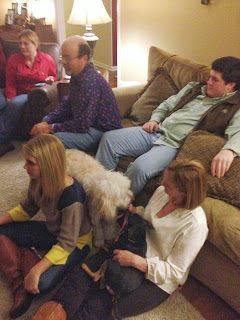 Above is Casey, Staci's son, and Jay's new stepson, who is at LSU with Mary Allison.  Linda Lou is in the white with her new giant dog, Lucy, which she actually carries everywhere as if she's a baby!  And then, Julianne, Judy and Eric's daughter.  This is cracking me up on the inside!!!  Are y'all even remotely following?!  This is seriously how my mind works! 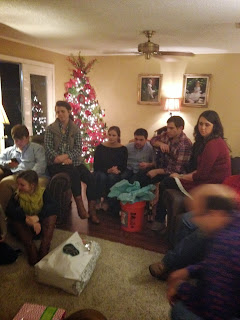 Julianne is a dancer with the Twin City Ballet Company, so she spends a lot of time with Linda Lou et al. 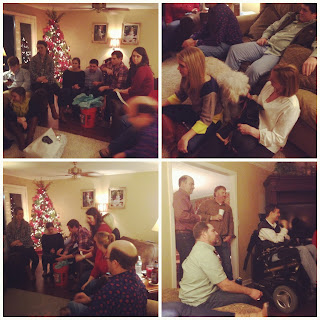 Jusssst kidding.  I'll let you look at this very peaceful new fishtank that Todd got our fish, Fishy, for Christmas to destress while I move on.  Breathe in.  Breathe out.  Think of a happy place.  Look at that glistening water.  There ya go!  Now... let's move on! 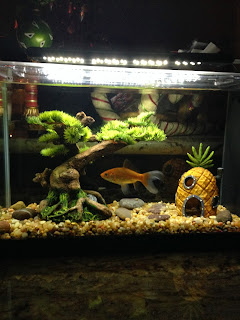 Ellie and Gabbi had a visitor over the holidays who came bearing gifts!!  Bruin is their little buddy from down the street who comes to play with Ellie from time to time. 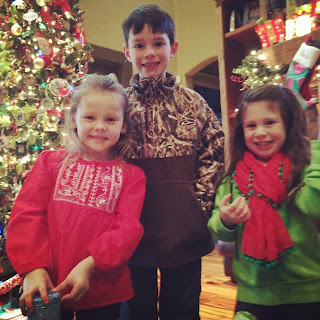 Isn't that about the cutest picture ever!?

Love new traditions, but seriously.... how in the heck do you keep up with everyone! I'm exhausted from just reading! Ha ha!

I had a hysterectomy on the 18th. I am still about to die. I have no idea how you have done all this partying. Christmas Eve left me in bed for Christmas Day! And I just sat and visited with family! I bet that airstream you ordered shows up in a day or two lol lol

I have them all straight!! I love all of the Cousans family... starting with Stevie! And, Jennifer's husband was raised right down the street from me and rode to school with me. He says I taught him how to cuss!! Just because he slammed the door everyday and one day I lost it and said, "Slam it, damn it!" Made a bad impression on him for life! The girls are so precious. Thanks for card..special to me. Had a special Jake time when I put the BELIEVE and M&M ornaments on my tree. Still making Cheesy Chicken Spaghetti with the recipe and thinking of him then too. Take care of yourself. Hope to see you before too long.

I think I got it? Just don't quiz me later. Seriously woman how are you feeling?

Oh yeah and tell Todd congrats on beating the Bears. My family is divided half Packers half Bears. But our Hawkeyes are going to beat LSU!!!! I hope. ; )

I had to read & re-read some of that, but yes, I followed.
Cute picture of the kids at the end too. Gabbi is rockin' that scarf!

That is a six degrees post for sure! What fun.

I'm so confused but hey....looks like yall had a good time all the same!!

Yes. That's exactly what I said. First attempt at ablation. Fail. Then the hysterectomy!

I got it! We have the same thing here and you'd get that too if I explained it!!! Happy New Year and wishes for continued healing for you .