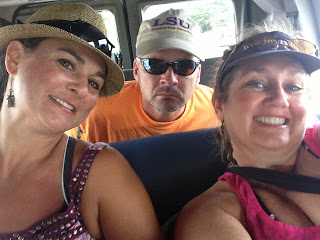 So, we knew we had only one day on the island.  (Cozumel).  This was a 5 day cruise... two days to the island and two days home.  We needed to make the most of it.  We decided we'd go to a poorly populated beach, but had no idea that it would take 30 minutes or more to get there!!  We rented a van and hit the road. 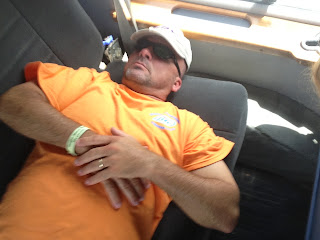 Johnnye ended up taking a little power nap on the way there.  But... at some point, we started getting a little wigged out, as the driver didn't speak a lick of English, we were NOT driving along a coastline of any sort, and we had NO idea where we were going.  We started making Survivor-style plans.  I was in charge of weaving the palms into a thatch roof so we could have shelter.  Dakin, the hunter of the group, was in charge of the spearfishing.  Seriously... we were getting a little nervous.  SOoooooo... when we saw Coconuts Bar and Grill, we tapped her shoulder and basically said, "This'll do!". 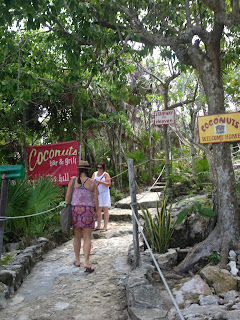 We were all in bathing suits for basically no reason whatsoever. 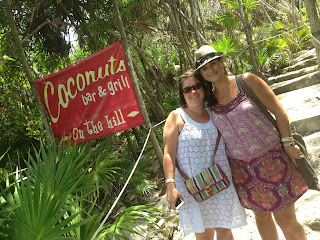 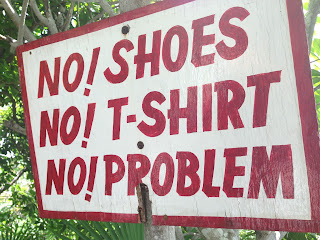 They didnt' really have much of a dress code as you can see, and it was basically a thatch hut at the top of a hill.  There wasn't even a beach attached. 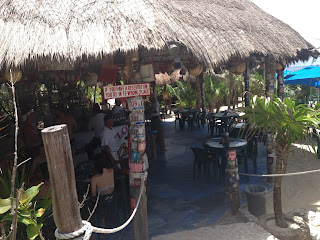 But we were alive and out of that van! 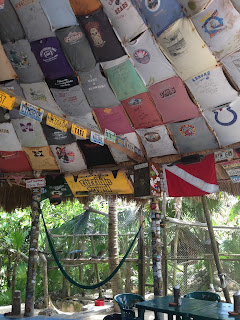 It was an interesting little place. 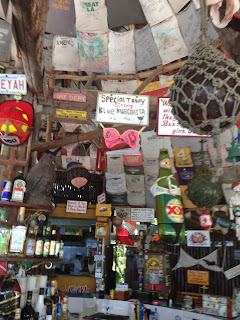 There were tee shirts, panties and bras everywhere.  I naturally loved that number 11! 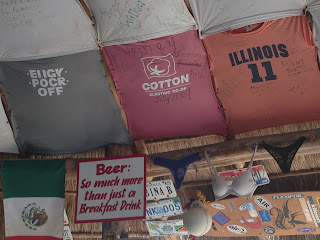 I took a shot of this one for Todd the Bod.  He was missing all of the action. 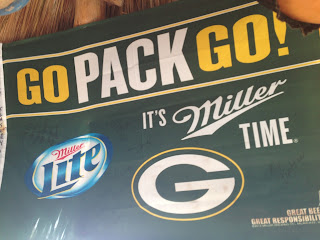 Johnnye found something "interesting" too.  I think they said this was good luck.  And we NEEDED some good luck! 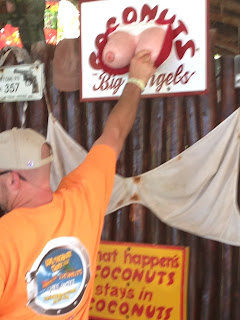 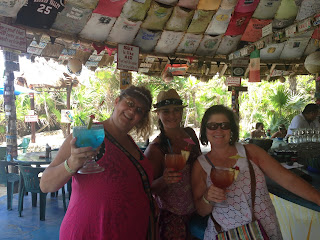 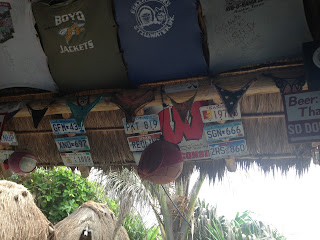 I think they just let people bring whatever crap they had handy, or that they were wearing and left it as a souvie. 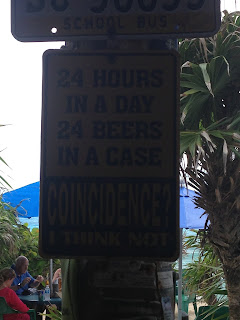 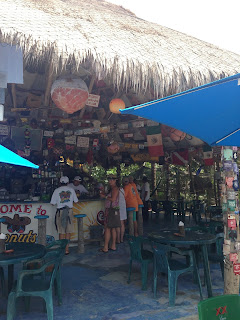 I think it is funny that this was the one and only spot we spent two days getting to.  And we sat and drank a margarita, then went right on back to the boat to sail back to port in New Orleans.  Haha. 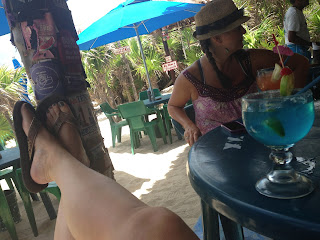 All for this, I suppose. 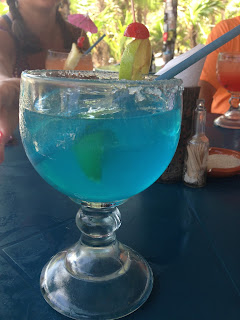 And a local yocal who could make grasshoppers out of reeds. 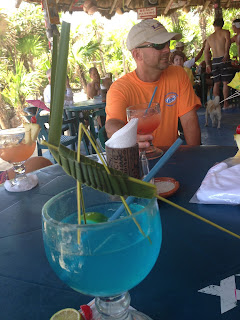 Yep.  SO, that's the highlights! 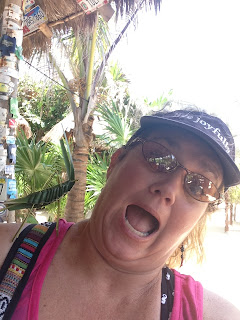 Oh wait.  I forgot about this... ceviche'!!  That's my most favorite thing, and in the Caribbean, it is FRESH!! 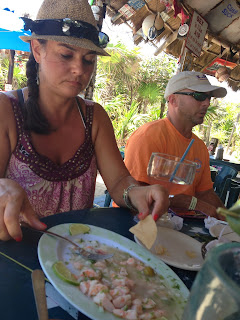 Another perk is that we hooked up with our buds from the front row of the concert!  They were from south Louisiana, and they dressed up in theme wear every night too! 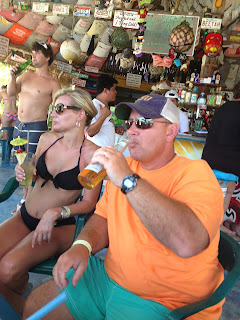 This, in fact, is Magnum PI.  Remember him?! 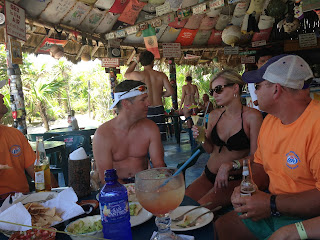 These guys were petroleum engineers from south Louisiana, and their wives were nurses.  I've been on three cruises, and every time, we hook up with a couple or two and they become our "cruise friends".  This was ours on this trip! 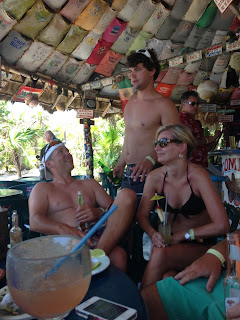 And this was our unbelievable view from the top of the ridge. 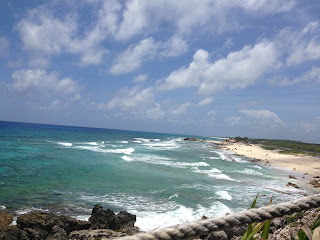 We will never be charged with not being able to make the most of a "weak" situation. 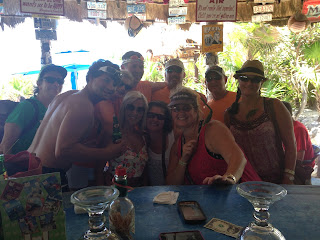 And on the way back, I was the one lying in the back seat!!  That blue margarita was a doozie!! 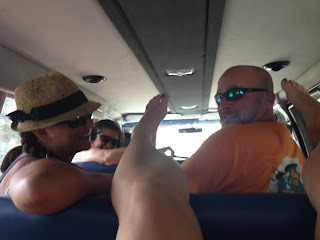 Yep.  Just get me back to Todd the Bod.  I'm afraid that if our driver stole us at this point, I wouldn't be able to thatch ANYTHING!! 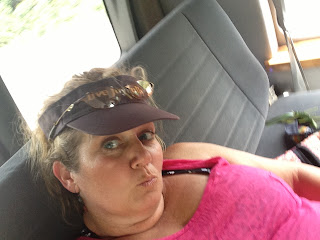 View from the back... in case someone found my phone when we came up missing. 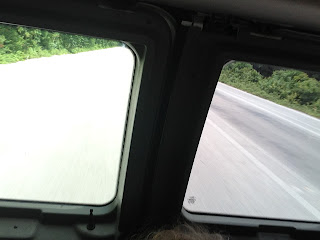 Of course, I am only (sorta) playing!  The driver actually picked us up at the airport and we felt ok with the group from whom we were renting. 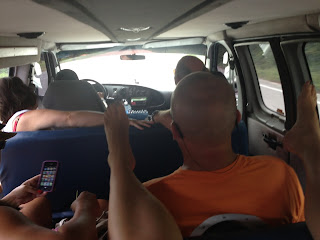 Just taking you on a little adventure with the crew!!  Tomorrow... one more day on the boat, then home sweet home!

Gives a different meaning to 'let's go to the beach'. LOL So what did y'all leave at the hut?

Mama J, ALL of Johnnye's clothes!

Haha the drivers were the worst part of my cruise!!! And driving out to anywhere is SCARY!

I always love when something doesn't go as I expect, but turns out to be a great adventure! Of course, you guys have the right attitude!