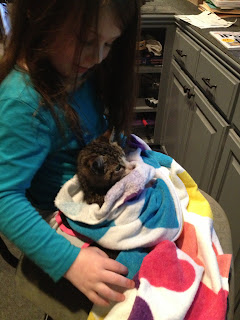 Ok, so it has been a WHILE since I blogged when I realize that we have had a cat for three weeks, and my bloggy buddies are just now getting all the deets! So, here it goes. I have a patient whose grandparents own a car dealership. 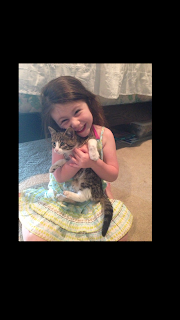 I told her one day that I really liked her car, and she suggested that we swap for the weekend.  She brought her Yukon to me on a Friday, and I could have sworn I heard something that evening when I got the ride home.  But, on Saturday morning, when I went to get in the vehicle, I KNEW I heard a cat "mew".  I went inside and told Todd, a) I've NOT been drinking.  And b) there is definitely a cat in that car somewhere.  So, Todd went outside, and we both started hunting.  Todd was under the car, and I popped the hood. 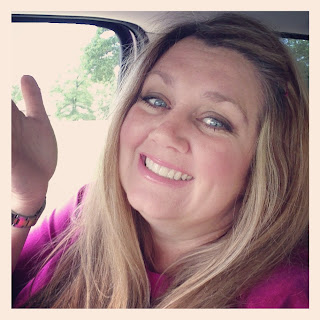 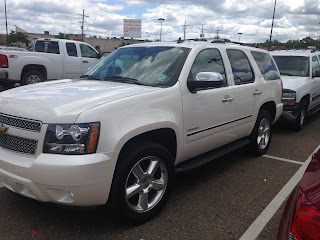 I found that poor baby in the wall of the vehicle above the fender well of the front right tire.  It took us a while to get the poor baby outta there.  But when we did, we realized she was already a great little thing who didn't even seem to be afraid of us at all.  She'd been riding above the fender for two days.  She had a little bit of an injured paw pad, but otherwise looked great.  I called my patient's mama, daughter of the owner of the car, and told her about what we'd found.  She said, "Oh, my mom will be glad to know that.  Her cat just had three kittens."
I'd solved the mystery!  I told them I'd return the kitten on Monday morning when they came in for therapy. 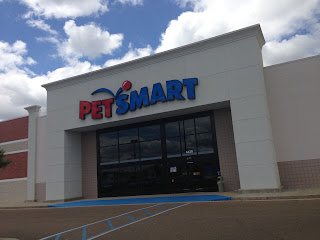 Around 4:00pm or so that afternoon, I get a text that says, "Mom still has all three of her kittens.  That one is not hers."  WHUT!? 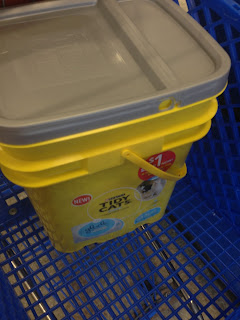 So, like that... we had a kitten.  We are not fans of taking animals to the pound.  After all, we are rescuers... of animals.  kids.  whatever! 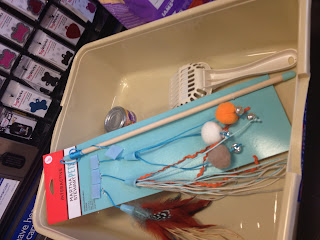 So, by Sunday morning, we were at PetSmart, and had $200 worth of kitten goodies.  This was a NEW WORLD to me! 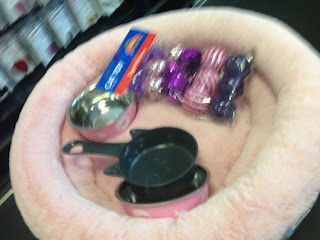 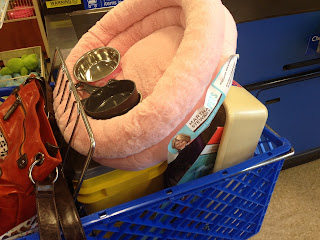 So, imagine my surprise when we put the litter box together, and within 10 seconds, little missy had squatted and teeteed in her litter box.  We were floored!  Cats just KNOW that this is where they are supposed to pee.  It's wild!  No potty training?!  Ok, she can stay! 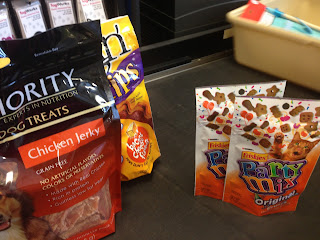 And this baby kitty seems to think that I am its mama!  She licks me from the tip of my face to the chin! 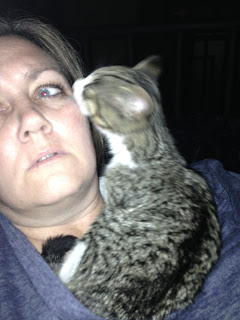 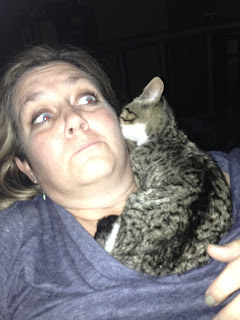 and she really loves to pile up inside my shirt and cuddle against my boobies.  What's up with that?!  Maybe I'll call her Todd! 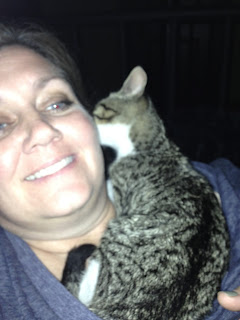 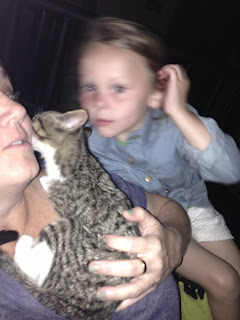 The girls LOVE this cat.  Especially, you know who.  Gabbi is bound to be a vet some day!  That girl L.O.V.E.S some animals! 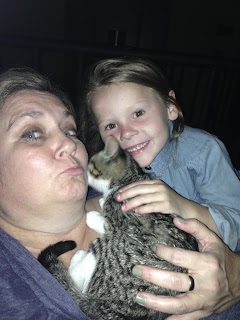 And Twilight Sparkles (Gabbi named her!), definitely seems to like it here with us. 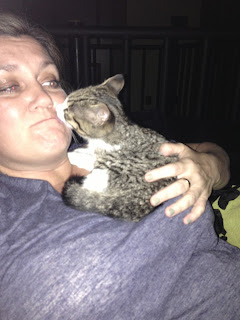 I know these are NOT the most flattering photos of me, but since we've known each other now for about 10 years, by now, you know I have my good days and bad days.  and this was a BAD day. 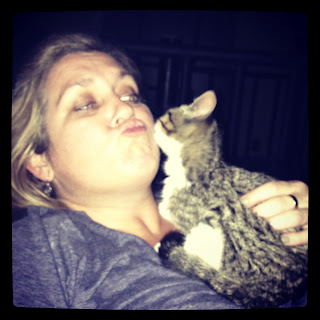 She has got to be the most snuggly cat there has ever been.  Who am I kidding?  I've never had a cat, so how would I know?! 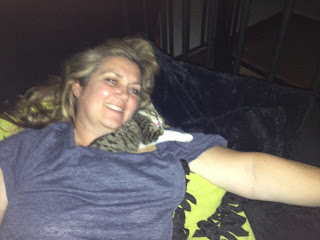 But I know one thing.  Twilight Sparkles is super duper sweet.  And she already prefers sleeping with us every night... now we have four humans, a cat and a dog.  Lizzie seems to thing she is just fine.  She doesnt' mess with her at all. 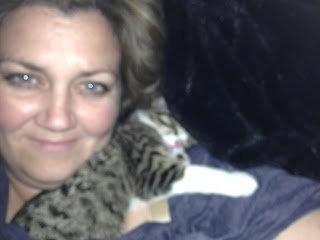 In fact, TS was way more "ugly" to Lizzie, hissing right at her, than vice versa. 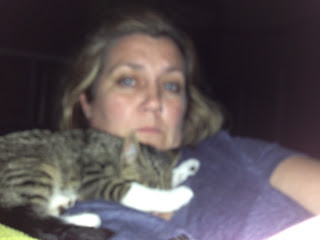 But, the look of happiness on my baby's face when Twilight Sparkles is around is priceless. 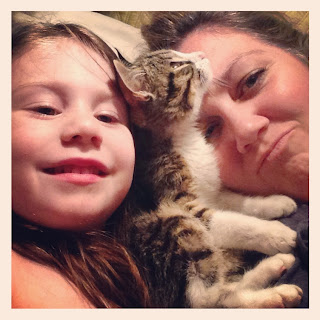 oh, and in the case you start hearing me call her something different, Ellie has already named her "LouLou". Not sure why.  She writes, "Ellie Sue.  Gabbi Lou.  Melanie Sue.  Todd Groves (ha).  Lizzie Girl.  and LouLou Girl.    Pretty funny now that she can write!  I get to find all kinds of funny notes around the house.  Alrighty then... welcome Twilight Sparkles LouLou Groves!! 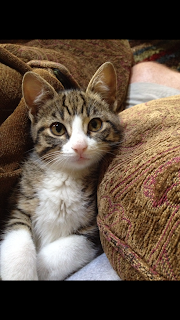 TS Lou Lou sure looks like a cute kitten! You have a lot of love in your family...the more, the merrier. Farm animals may be next! ;-)

P.S. I made the first comment...don't think I've ever done that!
P.P.S. "...and she really loves to pile up inside my shirt and cuddle against my boobies. What's up with that?! Maybe I'll call her Todd!" This line in your post made me laugh out loud. Hahaha!

What a great story! She is so precious.

You crack me up! I literally lol'd!!

On your worst day you look better than most peeps.....you wear life well! Sweet kitty posts....

happiness is a warm fuzzy - and cats are awesome!!! they love unconditionally as long as you don't anger them lol you tried little dog love and god saw you really needed a cat to round out your home. be warned - they are like tattoos, they are contagious lol (i don't have any tattoos but i have way too many cats!)

it is kitten season here - i have two in the house that i have no idea where they are. their mama was killed on the road and they showed up next door a week later. i am trying to tame them a little before putting them outside and i found out today that two more just like them are next door too! i have two babies that are almost 3 weeks old in the house with their mama that is an outdoor/indoor cat. she came screeching in the door one day ready to deliver. she always comes in to have babies. we also had 3 kittens on the front porch that the mama brought from the barn last sunday to bring them to the cat food. my son has given away two today and the 3rd is going to other family of the first two.

boobs - they are like a magnet! my son was looking at pics of the little dog when we first brought her home. she was so tiny i used to shove her down the neck of my shirt so i could watch tv or work on the computer. now that she is much bigger she still prefers to lay on my chest and the cats fight over me too. when the family is together watching tv i am usually covered with critters from head to toe and they won't have any on them lol

oh and everything in the house is spayed/neutered. we have never had any luck doing the outside cats. everytime we have taken them to be spayed or neutered they run away when we bring them home. the outdoor ratio of cats that survive to adulthood is low. we are not real close to the road, but either the road or driveway gets way too many. and my indoor/outdoor cat never comes in when we have an appt to have her spayed lol she is smarter than we are lol

Adorable! She's a keeper for sure.

Mel, you are beautiful even on your BAD days! Enjoy the kitty. God bless.

Wow, those snuggles look amazing... Twilight Sparkles may have had a difficult start, but I'm sure it was worth it to be rescued by such a loving family. Everyone wins!

So excited to hear the story. That is exactly how we got our older cat. We now have another cat and a dog. None of them are the others best friend, but the live nicely together. Love that you were chosen by her to be her family.

So excited to hear the story. That is exactly how we got our older cat. We now have another cat and a dog. None of them are the others best friend, but the live nicely together. Love that you were chosen by her to be her family.

Oh how sweet! I love kittties

Oh how sweet! I love kittties