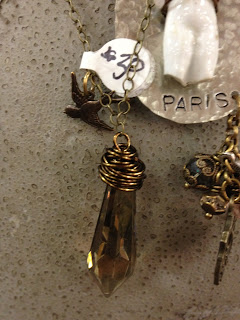 I know that by now, you all know that I went to the big, super awesome, most spectacular annual Bead and gem show in Tucson.  And this year, I took my good buddy, Jessi, with me.  I've asked her before, but she was too much of a newlywed to leave her hubs until this year.  And so... swooop!  I swooped in and she went with me.  And we had a BALL!! 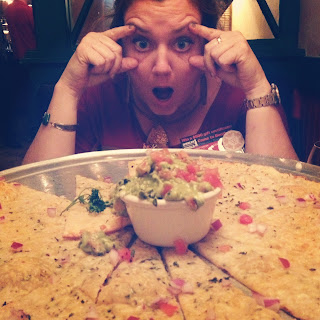 Because Jessi completes me.. in the way of, she compliments all of my weaknesses, she did all the research to find out awesome places to eat when we were in Tucson.  We discovered two places that were a foodie's heaven!  We ordered that bread with guacamole as an appetizer.  But when it arrived, it was HUGE! And then, we ordered a barbecue pizza.  One of my FAVE kinds of pizza.  And a crispy thin crust...the ONLY way I can eat pizza anymore. 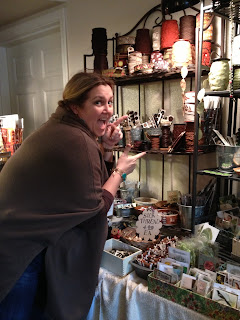 Just to mention, aside from the billions and billions of beads and stones in Tucson, there are also some treasures hidden amongst the jewels.  This was a great ribbon, trim, and notion booth that had some really cool vintage stuff! 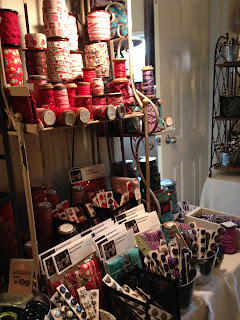 and she had it all color coded, so I was most inspired. 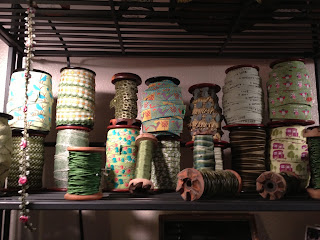 And although I've been wanting to do this for years, I have never actually stopped and done the whole mineral shows.  Fossils, huge quartz and other crystals, and I specifically went there to find a METEORITE! Tom, at my office, wanted a meteorite for his wife.  I was even able to buy her a piece of tactite, which is another remnant from a meteorite which fell in Argentina.  And a really cool mineral formed by lava from a volcano which will likely never again erupt, making it pretty rare.  It was called laromar. 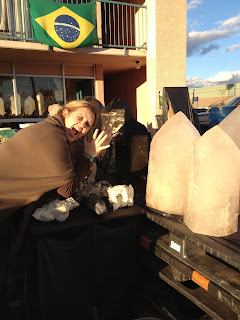 These huge pyrite suns were so pretty.  Glittery, and I love that they are naturally made. 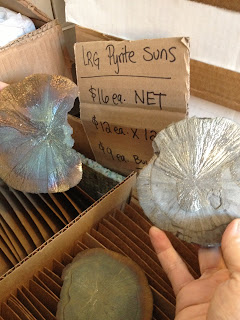 Jessi was instagramming along the way.  I only saw this picture AFTER the trip.  She captured a little bit of our flight, the shows, and what we were learning in classes we decided to take. 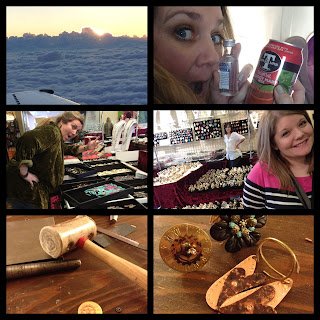 I am not so much a mineral person, but some of these were just too hard to believe.  This is a quartz crystal mass. 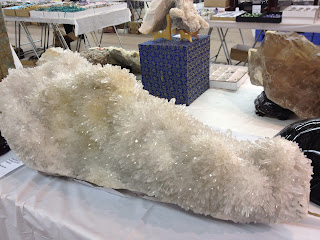 And we did spend many an hour digging through a gazillion beads. 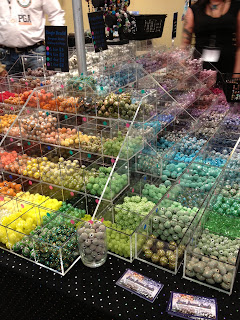 Jessi has heard me for years come back from Tucson all stoked and for years, she has supported my trip, but said, "Now, mel, you know you don't really need anything, right?"  Welllllll.... THIS year, she said, "Ok.  I get it.  Now, I really do get it!"  It is totally overwhelming.  The whole experience is just so dang inspiring!! 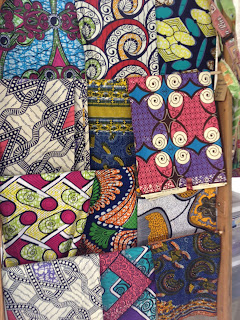 Those fabrics above are from India.  And I LOVED the way this display was erected from an old suitcase which had lost its bottom. 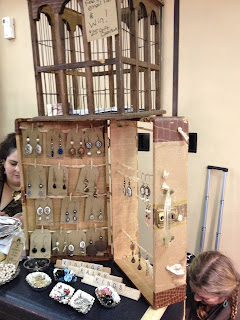 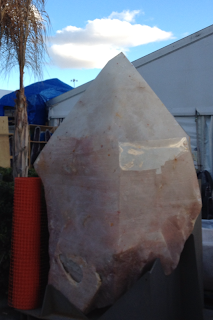 I loved meeting this woman.  She was so much fun. 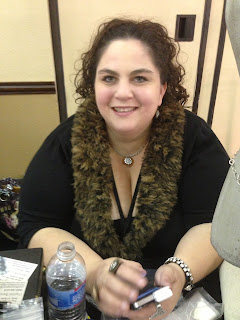 She was more than helpful with new techniques, and gave us good deals on her things. 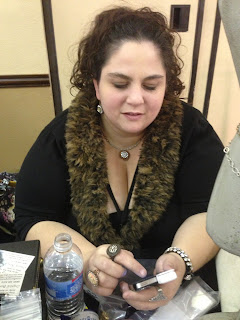 and I thought she looked and acted just like my blog friend, Mindy. 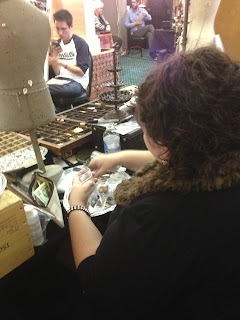 She primarily sold vintage goodies.  I was totally sucked into her booth.  Luckily, Jessi agreed, so we sat and pilfered through her wares for quite a while! 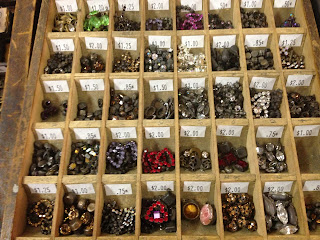 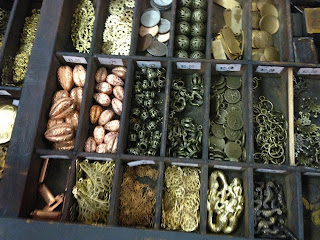 I am going to start working on making the sample projects for the beach retreat! Right now, I only have Kaye and Kim signed up for the beach retreat over Memorial Day weekend.  It will be all jewelry.  Sherry, you said you'd be there too.  Sherry is a fellow John Maxwell coach, so I am sure there will be some deep conversation thrown in there too.  I LOVE that JM teaches so much about attitude and setting priorities, and really maximizing your life... as well as taking control and responsibility of your own life.  And big time... having a good, optimistic attitude, regardless of your circumstances! ( That was for you, Kim B!  Ha... she said she didn't like when I blogged all that JM stuff.  well, TOO BAD!!) 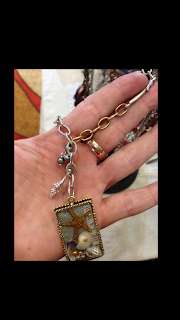 So, soon I will be putting samples up for the retreat.  I can take three more people.  It's gonna be fuuuuunn!! Who's it gonna be?!

I can send you details personally if you wanna know more.
And I'll be blogging more this week on Tucson!

Commenting again. So jealous that you are able to go to places like Tucson. I have tried to find bead shows up by me but must be looking in all the wrong places. Love the vintage stuff and I think I would be the one that barely made it to any booths because i could spend hours going through each container in hopes of finding those hidden treasures and perfect pieces that would inspire me. Can't wait to see more blogs about your trip. Followed your pictures/instagrams when you were there. Totally love that starfish/shell charm. Every time I see it I tell myself I want one just like it.

Feel free to share more John Maxwell stuff also. I am all about him right now.

Tucson sounds wonderful. So glad you and Jessi had fun! I love that you have such awesome friends

I'd love a retreat at the beach! And it's probably closer than your house! I wish it were more like the ones at your house. So all jewelry???

Send me an email, you may just sucker me in!
zhohndupont@eatel.net

I just saw an article about the Tuscon Gem Show and was wondering if you were there or not. It looks like you are having a fantastic tim!

You have got me curious,Mo. A retreat at the beach...what could be more fun and relaxing than that?? I would love to hear more.

Oh how Sami and I wish we could come especially since jewelry-focused. However, she is done with school in AR by then and will be in NC interning, thus no free days and too far. We still hope very much to attend a retreat some time :)

Can you please send me info on your upcoming retreat? louryn1@hotmail.com

and it isn't like i hate the jm stuff, i just like the fam and artsy fartsy stuff better. i would love to just come to la and hang out with you for a week! i have just never been the self help type - i am functionally dysfunctional and don't want to change lol lol lol

I would be interested in more information about the beach retreat. Thanks!

I would be interested in more information about the beach retreat. Thanks!

How could you leave anything behind from the show....everything was outstanding from your pics. A DIY'selfers paradise.

Boy, I wish I could do the beach retreat; however, we have two weddings that weekend. I'm sure you fill your spots.

I so need a piece of your jewelry! Not sure what -- talisman? Bracelet? Or -- let you be creative? Thoughts? Send them to me at susanterrywilhelm@susantx.com

would love details on the beach retreat . . .
Lelliott@trinitybirmingham.com