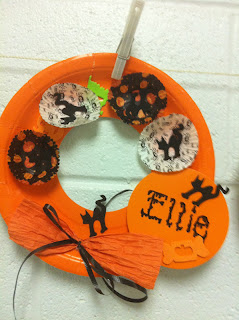 Well, we've crossed over to the world of PTO meetings and watching the kiddo perform for holiday festivities. 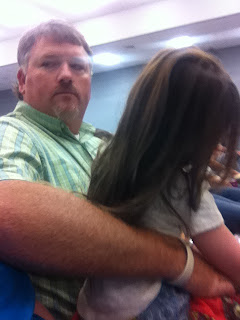 We were late getting there, but good ol' JinJin was there early and got us a seat!  It was a weeknight, so that meant I was bookin' it to get to the school from work. 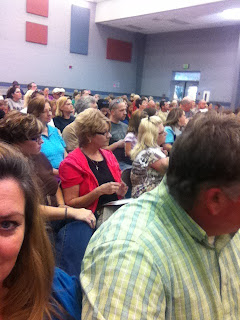 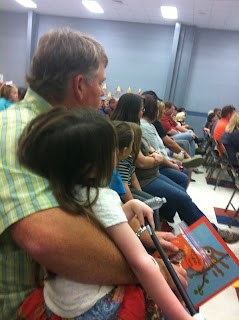 Dad and Gabs were already there when I arrived.  And the essay winners were on stage reading their riveting stories! 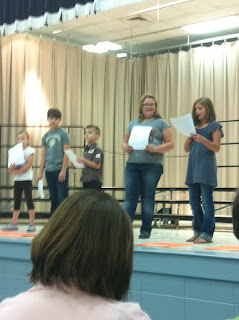 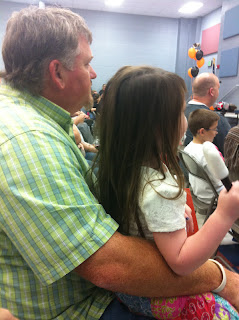 And then it happened... the kindergarteners came out.  Ellie was one of the card holders.  All the kids were asked to wear a Halloween outfit to the show. 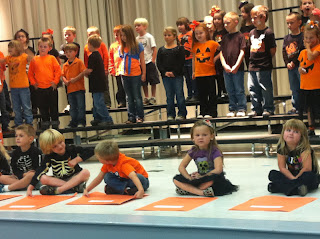 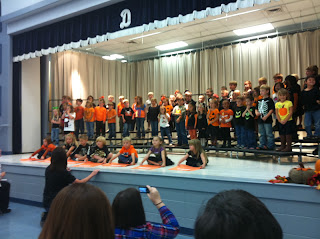 There she is... holding the witch.  I tried to upload two videos, but as usual, I have NO IDEA what I'm doing wrong, but nevertheless, they just don't show up on the blog.  Oh well. 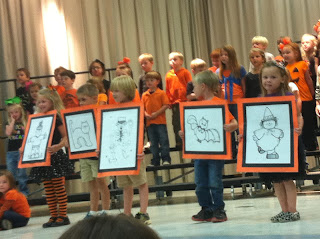 As difficult as this task appears, Ellie did a stellar job of holding her witch poster. And stood up at the right time in the song and all that! 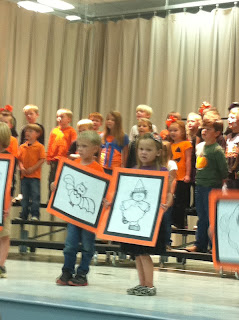 More videos (above) that don't work.

I think this is just plain precious!  Gabbi is so proud of her sister. 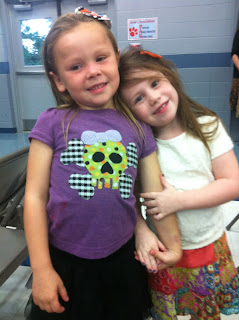 And then, Logan's mom asked the kiddos to pose for a picture.  Logan is the tall kid in the green.  And one of Ellie's "favorites" from week one of kindergarten! 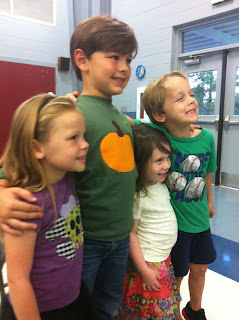 And I guess I can tell why.  Yes, Logan is the tallest in the class... but Ellie is one of the shortest.  Most people, when they meet her, are surprised at how tiny she is. I like to think it's because she has a gigantic personality, and people expect her to be a little bigger. 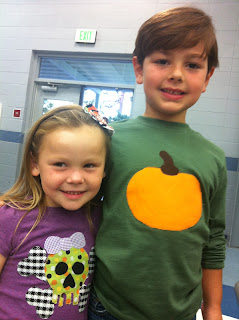 Her best friends are all boys.  And might I add, they are pretty dang cute.  WHAT are we gonna do with that kid?!  Her daddy might just lock her in her room when she's 12 and not let her out til she's about 24.

( I  got 20 comments and several FB messages and a text regarding ablation the other day.  I almost started this post with "vaginal dryness" or "feminine itching" just to get some responses!  ha)
Posted by melanie, aka Mo at 10:05 PM

Precious is the word that comes to mind!
Oh how I used to love going to those kinds of programs..... Enjoy!, only about 13 years left. Hehee

Love this age...FYI all the video clips did work...too cute!

Love this age...FYI all the video clips did work...too cute!

I keep meaning to go back and comment on all of the JM posts but that doesn't look like it will happen. But I did want to say that I thought that picture was very precious of the girls, too!

and i agree that ellie has a big personality - i wouldn't worry too much about the "boy" friends. we have a house full this weekend with my son home back from indy and his and my daughters best friend brooke staying here. and caitlin brought her friend alex home from school because we won't let her make the drive home alone and we had never met HIM lol so we have two boys and two girls, but no couples lol boys and girls can just be friends - maybe she likes the boys cause she is looking for a great man like her daddy to be her buddy ; )

Haha, if that's what it takes to get comments!

Just adorable. I know you'll appreciate each performance cause those years do pass so quickly. And the hangin out with mostly boys, so did Sami at times and they were/are all wonderful friends and sooooo much less drama!!!

Mo, LOVE your blog and really enjoyed all your JM posts.... have gotten the book myself to read up. I'm really lazy about commenting, but most definitely readyour blog every single day and enjoy it immensely. Kepp up the good work!!!

The videos worked great and were so cute!!

The videos worked for me, too. Ellie did a great job...cute songs!

The videos worked for me, too. Ellie did a great job...cute songs!

My 5 year old always has boyfriends. She tells me all the time she does not know which one she is going to marry. I pray a lot now for those teen years.

Too cute! The clips do work but all that shows up is the bar to play.