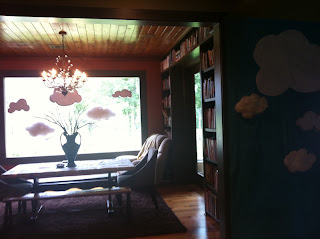 All she's said for the past few months is, " want a rainbow party".  I mean, it's been her sole request! 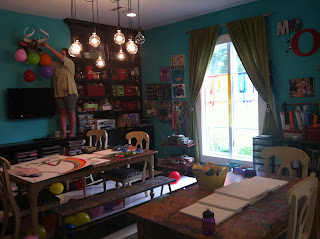 And so,  spent the whole day Saturday getting our house rainbow-tized!  We had streamers hither and fro.  We had clouds hanging, a birthday banner in place and all the favors were rainbow-y! 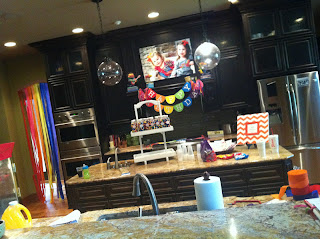 I made my girl a poster like I typically do for their parties, unless of course I have them hold a gigantic number. 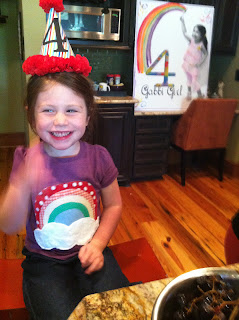 Breanna brought her a custom made tee shirt and hat.  She was going to bring everyone at the party a hat, but I said, "No, just make one, but make it special!". 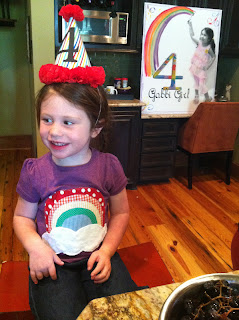 After all, YOFO... you're only four once! 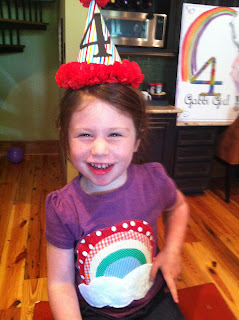 I covered the kitchen table with newspaper and let the kiddos get after it with oil pastels.  And Sarah and Emma Lou served the sprinkle marshmallows. 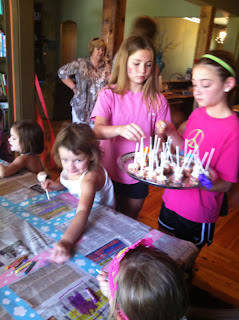 Gabbi thoroughly enjoyed every single part of her party!  ANd actually, that is ALL I was concerned with! 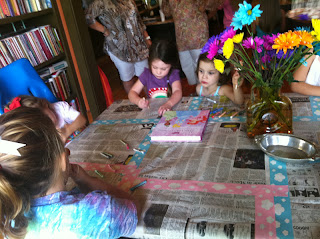 My friends, Kelly and Patti (who happens to be Ellie's kndergarten teacher too!), made this fabulous cake!! 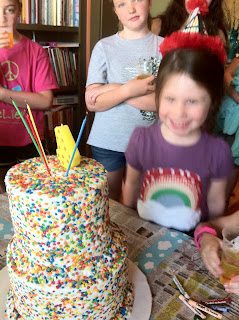 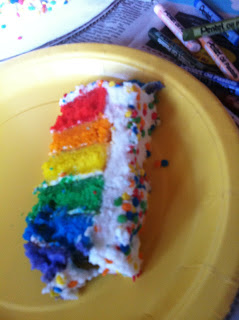 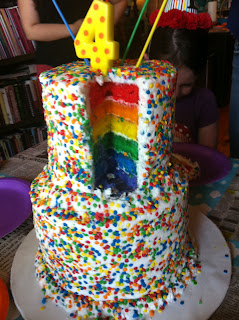 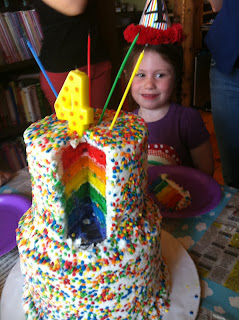 We actually started with the cake.   A little unorthodox, I'll admit, but Gabbi was just dying to blow out her candles, and it was her birthday, and YOFO! 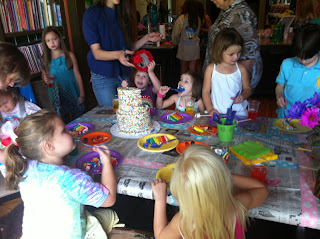 Jessi was wandering around with my camera (all of these pics were on my iPhone, so expect more, lots more, of the bday pics once I load them up from my awesome little camera! 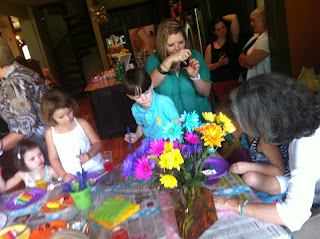 But until then, these pics will have to suffice in telling the story., the story of my precious four year old and her rainbow party! 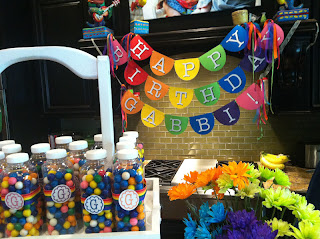 Mo-- now you have been swamped, but don't want to miss out on the retreat. Please e-mail me more infor -- I realized I don't see any e-mail address for you on the blog, so this seems like the way I should contact you. My e-mail is: olesenpa@comcast.net.

So adorable, just like Gabbi! Did you send the kids home with gum balls??? I bet some moms loved you..haha. The cake was gorgeous. Where was Ellie? Doing yoga or changing outfits? Lol

How did you make the poster?

The party looked beautiful! Loooove the cake--how cool! I bet Gabbi had a ball. You always make everything so special for your girls. They are blessed to have you for their Mama, as much as you are for having them as your babies!

I so want to be your kid! :) Thanks for sharing another fabulous party at the Groves' house. Gabbi looks like she is on cloud nine! I can't wait to see more pictures. Oh, and hear about little your "10 yr olds" first week of kindergarten!

That cake is AWESOME!! And were those gumballs in the last photo? My daughter would LOVE those too!

That cake is fab! I love Gabbi's expressions in the pic.

That cake looked great and tasted WONDERFUL!! My girls thoroughly enjoyed themselves, thanks for letting us join in the celebration! She is one great four year old!!

So fun! Love all the color & the banner!
Sweet Gabbi's birthday looks to be a complete sucess!

That is one coooool cake! HOpe GG enjoyed her bd.