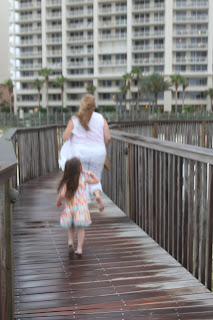 And lastly, the last group of photos of the attempted family photos... but maybe my favorites! 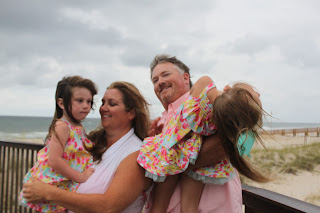 We were back on the boardwalk, and, well, I suppose you can see how well it was going. 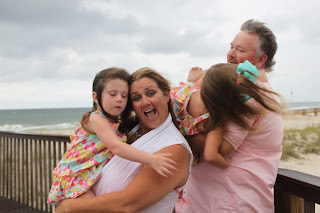 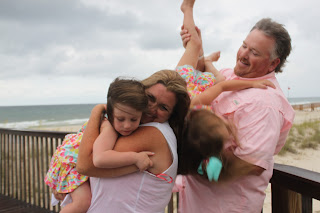 Todd was trying to keep it together.  And Mama kept on pushing for a possible moment! 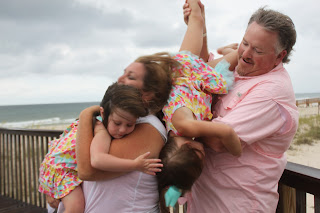 This is the one that I am currently using as my Facebook profile page.  I like this one!  I think it's hilarious. 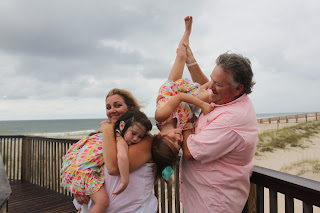 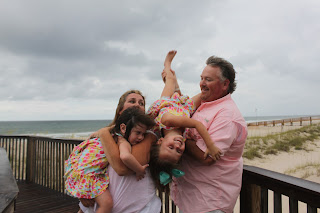 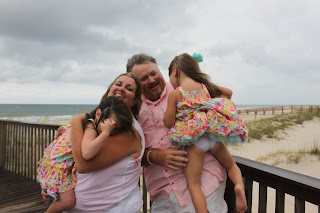 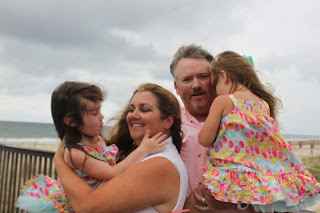 And then, of course, Gabbi needed to "make out"for a little.  When she kisses me, she holds my face, tilts her head, and maintains lip to lip contact for an extended amount of time. If I try to pull away, she pulls me back.  It's odd, but it won't be long until she doesn't want to kiss mama as much, so I just oblige these mini make out moments.

This is a pretty funny picture too!!  I love Ellie's face. 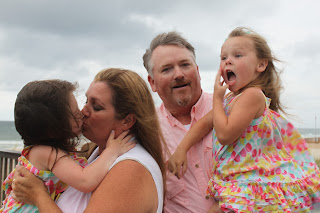 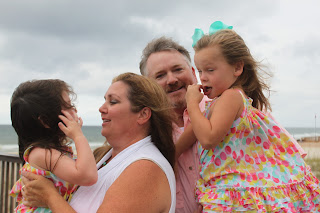 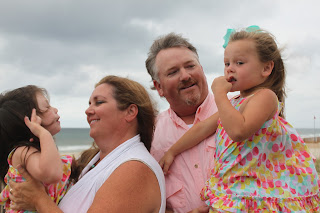 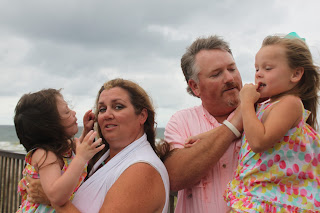 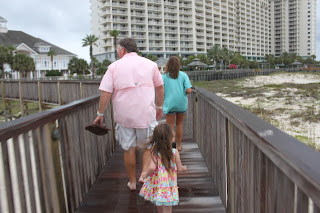 Ok, so we finished up on the boardwalk and headed to the area near the pools.  Maybe less wind.  Maybe a chance of a decent picture here. 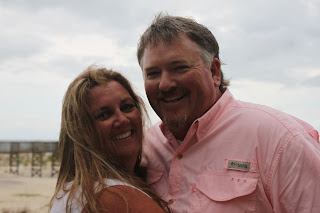 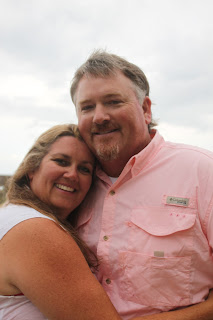 I can't believe how old Todd and I are.  WOW.  I know it's all relative, but we were 22ish when we met. We've grown up together practically.  Crazy to think about. 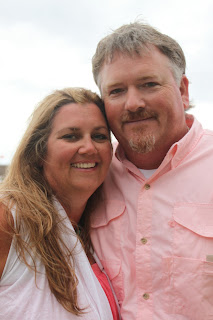 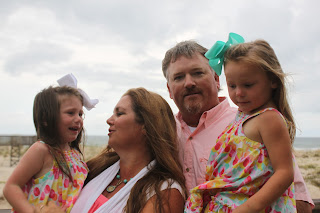 And by now, Gabs has HAD IT!!  She was NOT going to participate in any way, shape, form, or fashion! 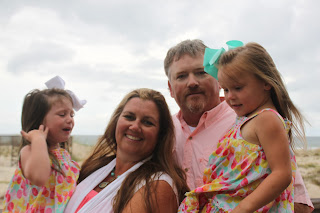 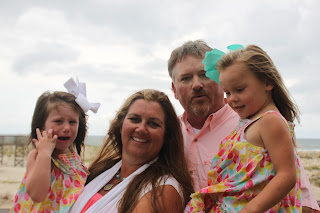 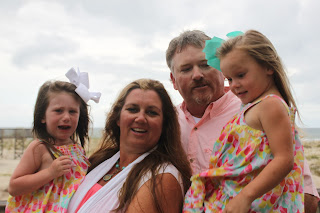 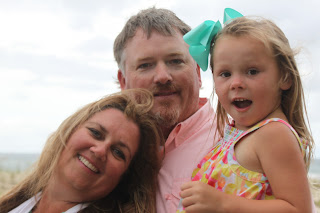 But I hardly think I could use this for a Christmas card. 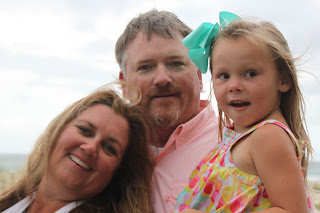 Or maybe I could add a sidenote that Gabbi was over here picking flowers!! 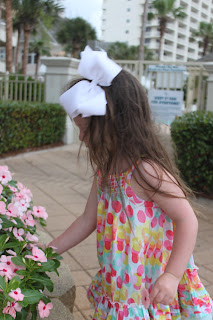 What precious girls I have.  I have been in Houston this past weekend for a course, and I have had some reflective thinking time.  I have thought about how my whole world seems to revolve around these two little angels, and how only 5 short years ago, they were nowhere on my radar! 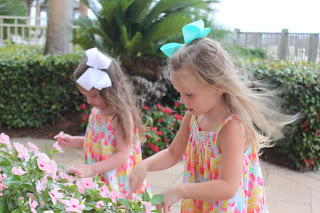 I mean, had their birthmoms not called me, I might would have never had children at all... and for sure not these two special ones!! 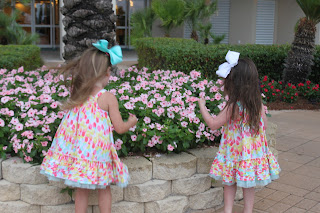 I consider my biggest joy, most important role, and the thing that fills my heart and soul the most is being a mama.  How close I came to never experiencing this.  And I would have never known what I was missing.  Honestly, when I didn't have kids, I wasn't totally consumed with the idea of it.  I tried through fertility measures, and then I started the process of filling out adoption paperwork, but basically.... well, let's just say, again.... I am SO blessed and happy that these two were given to me.  Even if we won't have a "good" beach photo this year!

I love the last photo of the girls picking flowers. The crazy pics are good too.

You know what's so great about you, Mo? You don't take anything for granted and you know how blessed you are! Y'all are such a cute family and it really is hard to remember y'all without the girls. You were a great person before but now I think you're wonderful, and from your post and pics it seems as if you're 'complete' now. I am so happy that you had the chance to be a mom, and it looks like you are LOVING it!! Those girls are some blessed ;)

This comment is blog related. I have missed you on Pinterest. It is great to see you pinning again!

I dont post often (sorry MO) Ill try to do better LOL Just wanted to say picture # 13 down from the top is great! I love the look on your face as you are looking at Gabbi... Your girls are precious and truly a gift from God! Thanks for sharing your life with all of us. I look forward to the antics of Ellie each day and of course the sweetness of Gabbi!

These pics are totally telling a story...just plain fun and some chaos in the life of the Groves family..LOL...I love the pictures and adore your family. I want to pinch Todd's cheeks..the one's on his face please...you compliment one another and you both love dem babies. They are just as blessed as you two are. We are blessed to be allowed to share your lives. God is good all the time.

I remember those days trying and trying for a good picture. Heck my boys ar 15 and 16 and we still have to "try". Love their dresses and my fave of all is the 1st one of you and TTB by your selves and the last one of the girls picking flowers. Too cute.

Mo, I love your pictures, I love your commentary, but most of all I love how you love your family!! God new what he was doing when he blessed your princesses with you and Todd for parents. Keep enjoying!! Your Ellie reminds me so much of my Amanda. Amanda was 5 when I adopted her. She just turned 16. It seems like just yesterday when she moved in. Thank you for sharing your life with so many of us!

Beautiful..... Both the photos and your words on what being a mamma means to you. God reveals His plans for our lives in His timing. Just know that those two precious little girls are just as lucky to have you and Tod for parents as you are to have been blessed with them. :)

Beautiful..... Both the photos and your words on what being a mamma means to you. God reveals His plans for our lives in His timing. Just know that those two precious little girls are just as lucky to have you and Tod for parents as you are to have been blessed with them. :)