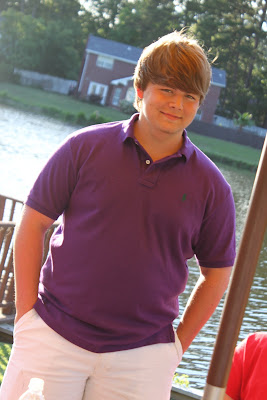 Well, it's been an emotional week for my friend, Paula! Her oldest son, John, has flown the coop! 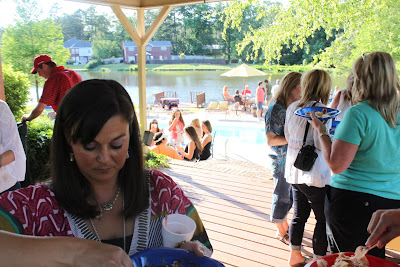 As she said, "You'll have to console me as I make it through graduation this week." And I told her, "And you'll have to console ME, in TWO years, when I send my baby off to Kindergarten round up!" And Paula and I are the same age. Graduated together. Next door neighbors. Totally different places in our mama lives. 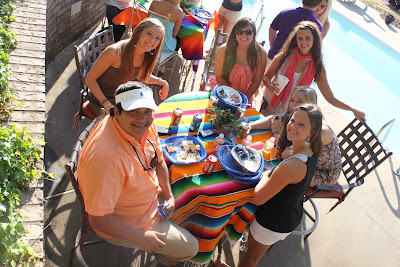 Because we are next door neighbors, and Ellie think Emma is her best friend in the whole world, well... we are at their house a lot! ! 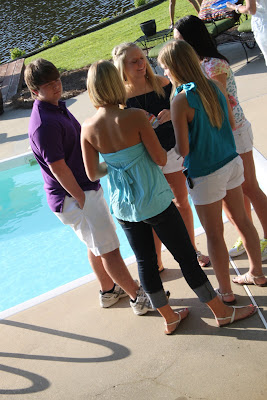 And because of THAT, I have come to know all of these young uns pretty well. Paula and Johnnye's house is kinda the hangout. It is nothing to have a den full of about 20 teenagers on any given night. 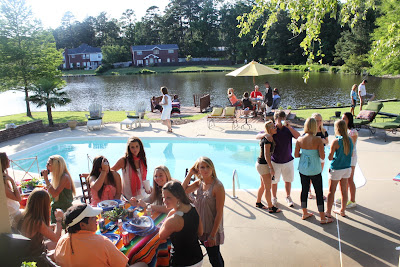 For that reason, I was more than happy to be a hostess for this Mexican Fiesta we gave for their graduation party. (Do you even KNOW how busy this week has been for me?!) 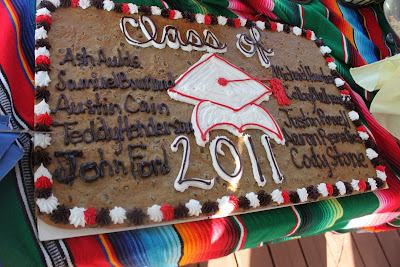 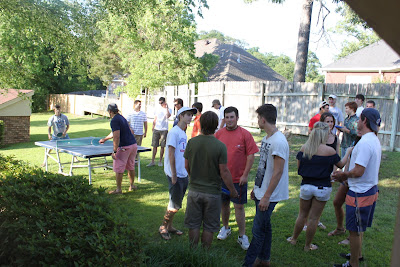 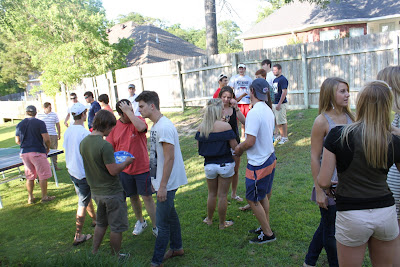 Not really. JinJIn was a clothes police! 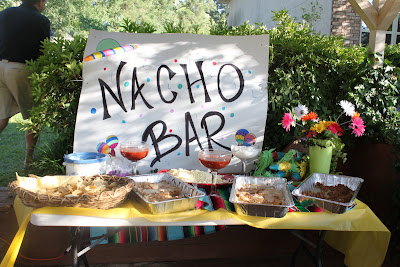 These are two of our best friends...

Sam is far left and Johnnye is far right. They have boys close in age, like me and Staci. John and Samuel are first cousins and are graduating together. 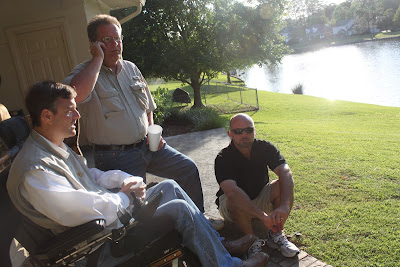 Look at these proud mamas. Not missing a photo op! 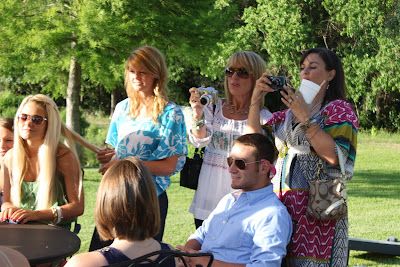 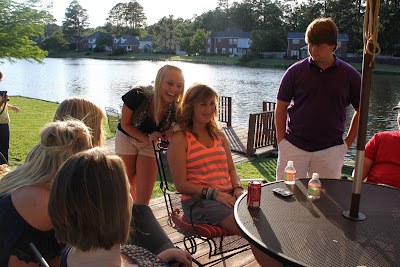 I'd never been to this house, but it sure was pretty! I love any place that is near the water! 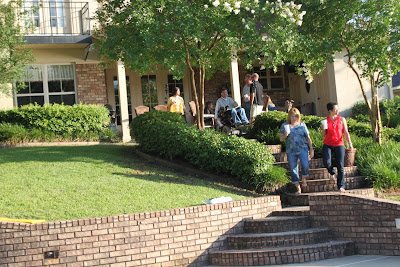 There's Colby, Ash, and john. Also, Reagan and Emma. But, I find I know the BOYS of the group better than I know the girls. 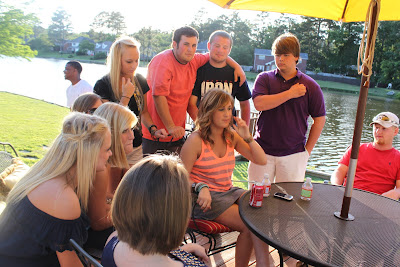 And then, the mamas realized the kids were clustered up and swooped in for some photos. 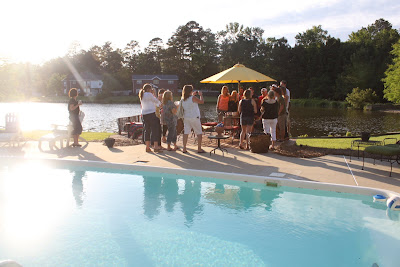 And out came the cameras! It was only four days til their babies graduated after all. 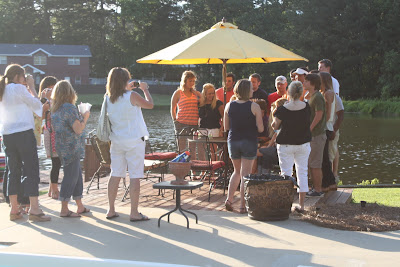 See that boy in the very back? His name is Teddy. ANd he looks, moves, and acts JUST like Scotty McCreery, my personal preference as this year's American Idol. (there's a bird!) 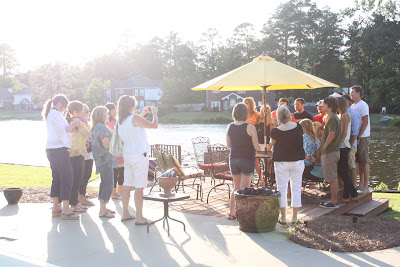 So, this is basically the crew I am used to hanging out with. Samuel, Linda Lou's son, is in the army green in front. John is in the bright purple. Far right is Austin. He has been helping me get my new garden going at the new house. Scotty McCreery is the tall dude in the back. Aaron is in the white visor in the back and already thinks he is an LSU frat boy. Colby is in the pinkish shirt far left (hahahaha, PINK, Colby!!), and Ash is the navy blue far left. He is the sweet, responsible, student government type. So you know I love him! And Cody is in the light blue third from right. He is the jock, country boy who is cool and aloof. There are two there I don't really know that well. Sorry you two. 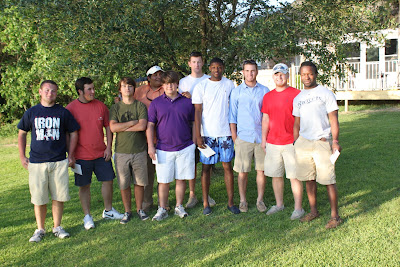 As of this morning, they are in Panama City, Florida, where north Louisiana teens go for senior trip! 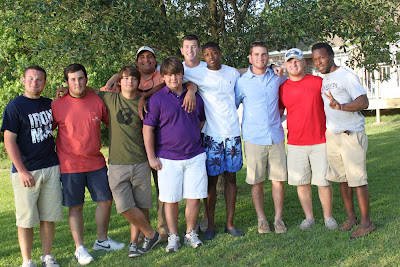 One guess who is there with them!!

PAULA!! And several other moms! They aren't staying WITH them,but are close enough by if anyone needs a mama! (I don't think she has ever fully recovered emotionally from her mama not letting her go on OUR senior trip! I should share pics from that someday!)

Paula has one graduating. I have 20 more years of schooling! WOW!

Great to 'meet' everyone! Saw the video of Ellie, so cute. Hope you are able to relax tomorrow after this week.

Congrats to all the graduates!

I'm feeling Paula's angst. Our oldest is graduating two weeks from today.
What a great friend you are to take on the fiesta for her. Looks like a great time had by all.

Enjoyed the pics. Paula will have a lot of advice to give you about the varying stages of kids growing up!

Awww congrats Class of 2011! I love pics like this!!! Well Mo...we are in the same boat...sorta! Our baby, Taylor will graduate from college next year and other baby, Bree will be heading to Kindergarten!! Whooooooaaaaa! What a stretch!!!