Are you ready for some most awesome sweetness?! 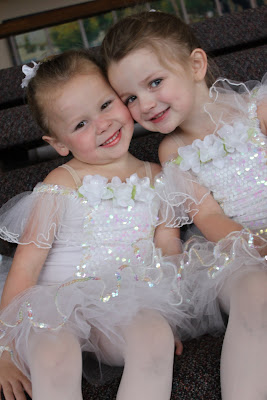 Well, here we go! This is Miss Linda Lou. She is daugther to Linda Lavender Ford, who was MY three year old dance teacher, and primo dance teacher for the past 2oish years. Ellie adores her. 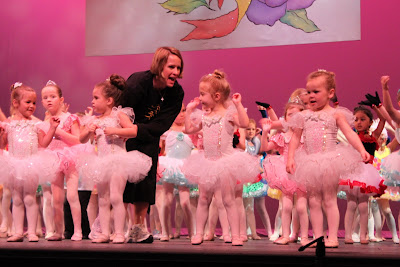 She has to have the patience of Job to deal with all these babies... as they make formations, learn their moves, pick their noses, scratch their behinds, wave at mamas in the audience... and you get the idea. Three year olds can be pretty unpredictable! 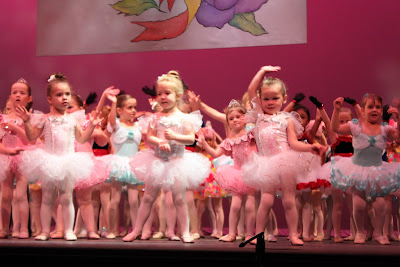 But MY three year old, on the end there, did an AWESOME job! And I just don't think I could have been any prouder! 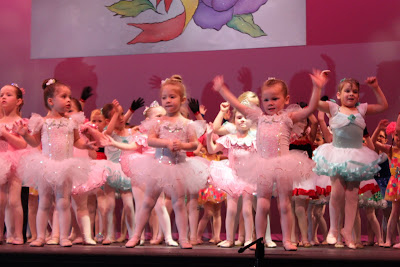 On her toes, arms out, as instructed as she exited the stage after her ballet routine. 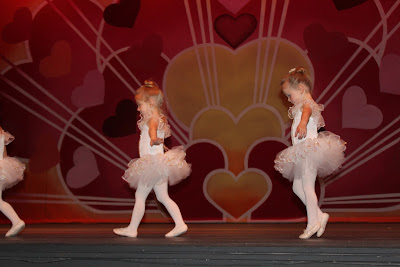 During dress rehearsal, we let Gabbi Girl hang around on the edge of the stage. Todd told me I'd regret that decision, because he was sure she would think it would be ok the following night at the recital. As it turned out, she sat perfectly perfect in my lap! 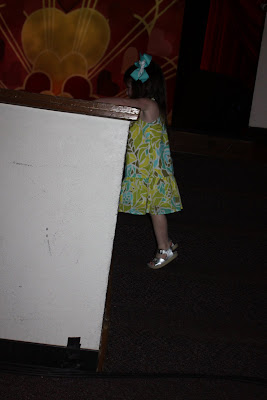 This is "the pit". This is where all the instructors stand and orchestrate the whole shindig. They have to conduct every routine from here, "reminding" the little ones of their moves. 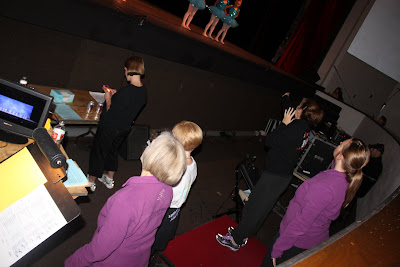 Meanwhile, stage right. or left. Or? I don't know. But, Meredith was so sweetly preoccupying Gabbi with a few moves of her own. Can you believe SHE is eligible to start classes this summer? My BABY!! 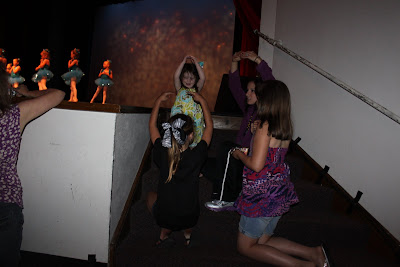 And then came the tap routine. It was to "justin Beaver"'s, "Baby". 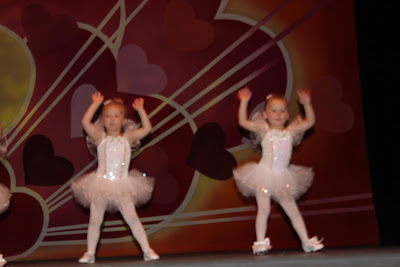 And it was a total hoot! Would you look at my girl giving her "shuffle step"!? Way to go, baby girl! 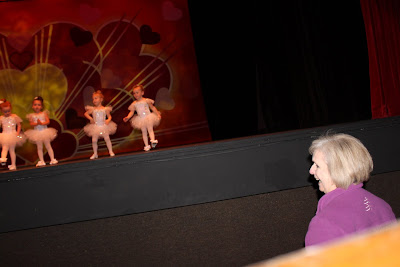 She was really into her tap dance. She sang most of the words and definitely came alive with the up tempo music. I remember that feeling. I never was much of a ballet girl myself! 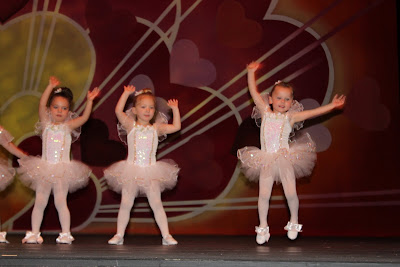 Here's Linda Lou reminding them of each move. 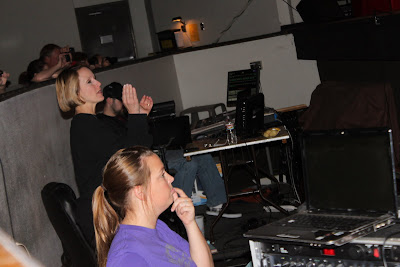 And believe me when I tell you, you CANNOT fully get the volume of the excursion of the range of motion of the JOLT of these hips during the chorus! 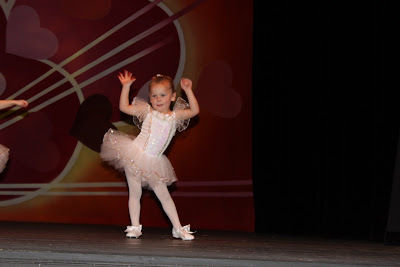 It must be experienced by video. And luckily I have that for you! I will do my dead level best to show it tomorrow! It'll make you howl! 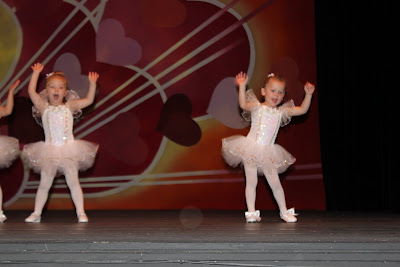 After the dress rehearsal, there was an opportunity to take recital pics in the lobby of the civic center. I had seen the line earlier and knew it was no small undertaking! But, lo and behold, we came out and were SECOND in line! Oh yeah, baby! This was sa-weeeeet!! 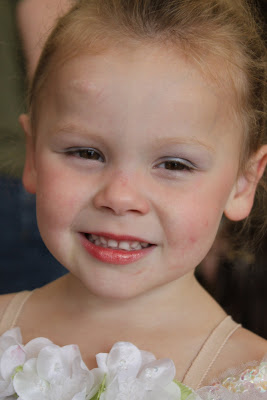 I pay my money, get her to the backdrop, and would you believe it? The world's most photographed child FROZE and started crying. She could not get it together and refused to take a picture unless Staci was in the picture with her. 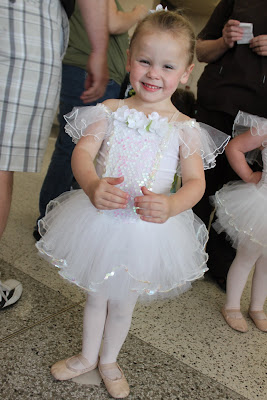 Which caused Madi to start crying as well. So, there went THEIR opportunity to take recital pictures as well. Rusty Lavender, the photographer, DID manage to snap one picture of them all red-eyed and boo hooing. I MUST have that picture. It's like the one where the kids hate Santa Claus and cry and when you look back, years later, you can see the humor in it.

Sooooo, we pulled them aside, and took a few classics of our own. 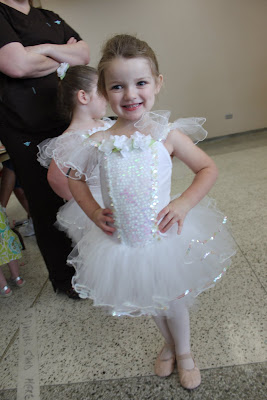 And I think they are precious, thank you very much! 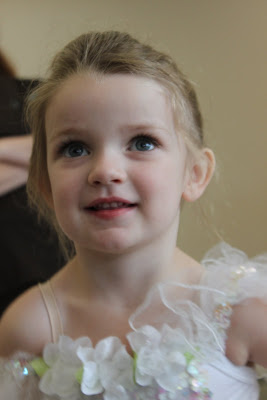 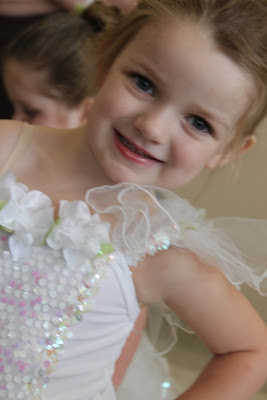 I think these with Ellie Sue holding out her tutu may be my faves. Would you just look at that little pointed toe?! 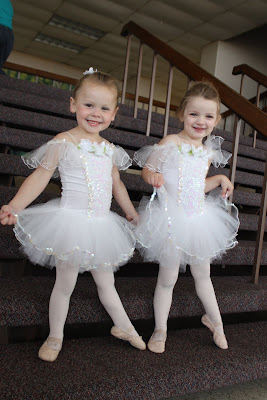 These two were so sweet. And honestly,I think they had a super fun first recital experience. 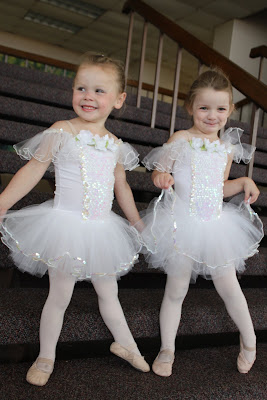 It is the first of many. I'd say we may be looking at dance recitals for about the next 13 or 14 years if her stage presence is any indication. 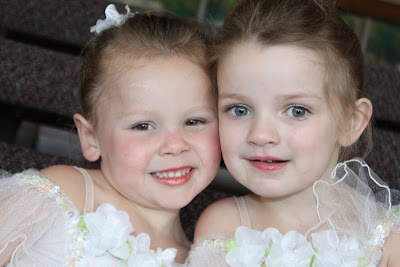 But that's ok by me, because tonight, I was one proud mama!!

Sooo sweet! Looks like Ellie did great and enjoyed it, I know you were PROUD!

Love the pics of Ellie & Madi together.

That last picture is my favorite. I have said it a hundred times but they remind me of my kiddos. Especially by boys who are five days a apart and will be 20 May 31st and June 5th. We had a scare tonight with May 3rd who is still at college and about 2 hours away. He was in the ER and they believed it was meningitis. His parents and sister were on their way to him but as soon as June 5th heard into the car he went with his parents blessing...he just had t get to his best friend. Thank God all tests including his LP are negative for meningitis. They are keeping him overnight to keep an eye on him and who is sleeping in the recliner right next to him...June 5th of course.

You have a beautiful family Mo. So very beautiful, so very blessed! Me thinks Jake Owen is very proud!

They look so sweet! I can't wait to see the video. These were the most cherished events of when my kids were this age - nothing more precious when they proudly perform what they've learned.

Oh, the memories these pics bring. My only granddaughter started dance when she was 3 and this was her first year to NOT be in dance (she will be 15 in Dec.). So many recitals....so many priceless memories! Thanks for the journey back in time and by the way, you babies are so precious......huggers, BJ

They look so pretty!!! Glad it went well and was enjoyed by all!

oh my word! They are certainly adorable!! I can't wait to see the video either!! I don't have any girls so this would be all new to me. But I understand being proud of your kid fo show! Congrats to Ellie and Madi on their first of many dance productions!

I LOVE the picture of Madi and Ellie at the top of your blog - you have to get that one blown up!!!! Sounds like a great time - I enjoyed the video you posted on Facebook. Ellie can certainly "shake that thang".

Oh Mo these are precious!! Ellie and Madi are truly beautiful!!! I noticed that Ellie/Madi have the exact same costume as the LEVEL 1 dancers @ Bree's dance school! I was admiring the white/silver costumes y'day at the studio *for picture day* !! Bree's is yellow/white and adorable, but I truly love the white/silver the best! Taking pics right after recital probably was a bit much for the kids. They should schedule them BEFORE the recital. Less chaotic and the kids are in a more relaxed mode. Just in my opinion! I think you all did great w/your own personal pics of them though! Truly, truly, a keepsake!

I can't wait until Bree's recital (June 9th) Her and my great-niece are dancing together! I did take a few pics of them on fb, but NOT in their recital costumes. Actually we bought the pink tutu's just for random pics! The costume are s'pse to be "top secret" until recital time! We had group/individual pics y'day and it was so precious! One little one had a MAJOR meltdown and my "great niece" who is the MOST EMOTIONAL child ever, starts "welling up" w/tears which caused a domino effect of the others EXCEPT Bree! She was "cheesing" away, b/c "momma was standing nearby with her coveted "cookies" she was promised if she did good! I can't wait to see the pictures she took! She was right on cue! The backdrop was precious and her dance instructor called out '4th position" and MY BABY hit it exactly and "elegantly held her tutu" with the most beautiful smile ever! Pure ANGEL!!! Uhhhh, yeah...I spent a small fortune on pics. I gotta log on to fb and watch the video! I bet it is precious!!

PS *Haw I fooled blogger today!! It erased my msg when I hit "publish" BUT I "copied" my msg prior to publishing it! It does that only on your comments to me!! :(

The video is a hoot! I saw it on FB. The pics here are adorable. They are growing up on you, aren't they?! Ellie and Maddi looked so cute in their tutus!