Guess what... I think I am only on photo number 615, and since I am going from the back forward, I have another 600ish pictures to share! You ready?

Ok, I think this is Gabbi Girl in summer of 2009. I just can hardly believe that! She looks so tiny! 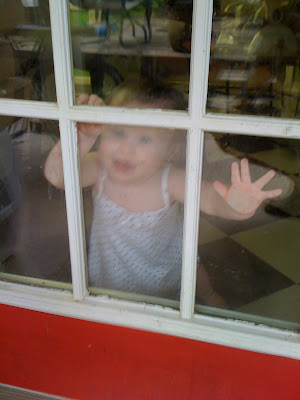 Todd rarely takes pictures and even more rarely with himself in them.... this, my friends, would be an exception!! This was a hole in one photo!! 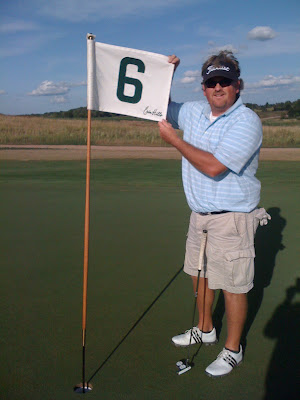 My hero!
And he has a picture of his baby girl's first birthday invitation on his phone. How sweet is that?! 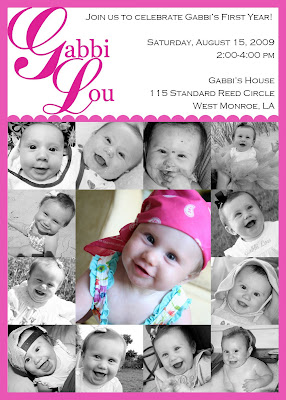 My gosh, we went to a lot of concerts in the last year! NIGHT RANGER. Kicking it old school! 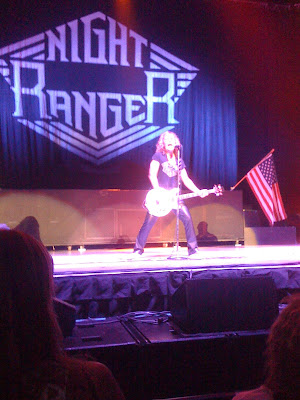 And then we hit the road to Little Rock to see Keith Urban. 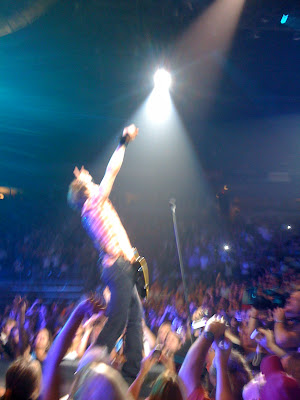 Todd had his iPhone out to catch this on the jumbotron behind the stage. 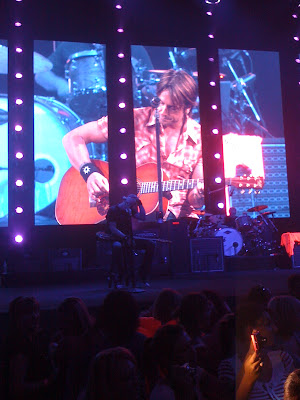 And then he caught THIS!!! 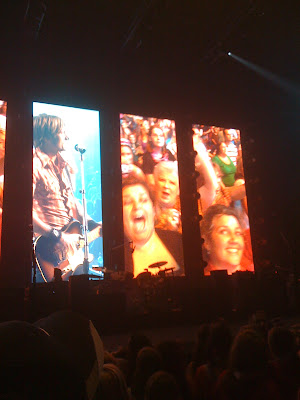 Now, truly, that was cool!
And it looks like my baby girls have been playing in mousse for some time! This has to be somewhere around August-ish last year. 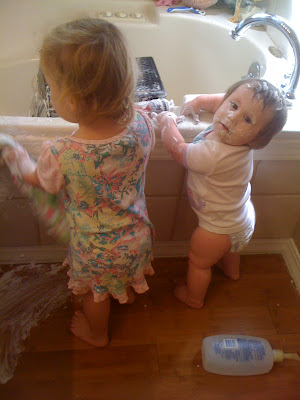 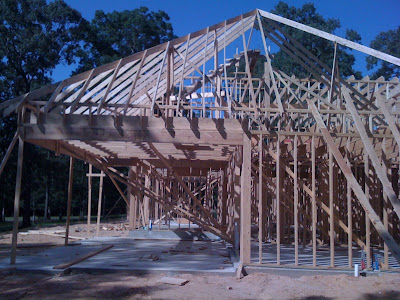 Awwww.... Todd, do you really have your brother-in-law in a picture on your phone? That is sooo sweet. Don, you reading this? Why don't you take us to dinner tomorrow night since this is so nice! 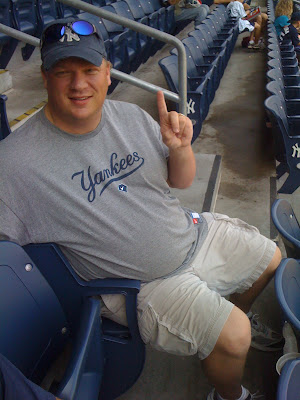 Here we are at Yankee stadium. Todd and Don over here in the shade.... the girls, waaaaaay over there in the blazing sun! 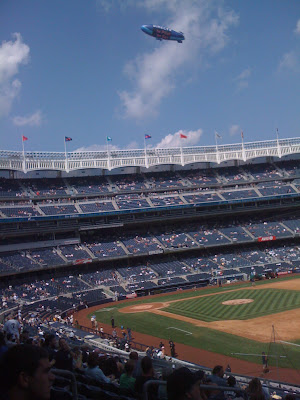 And man, is this ever a good memory? I am sooooo ready to go back to NYC!! 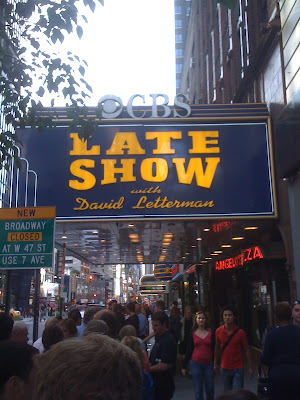 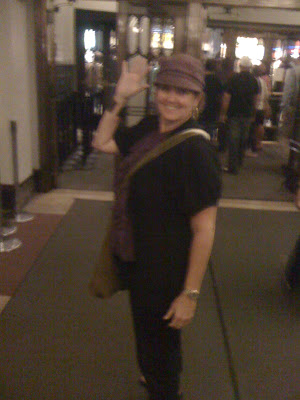 And this one is a riot! This is the hairdresser at the American Girl store in NYC. Too hilarious that Todd also found this as interesting as I did. 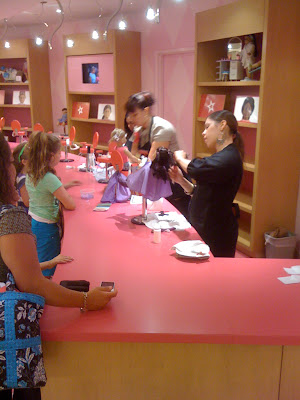 Todd apparently likedNYC as much as me too. He has mucho pics on his phone from that trip! 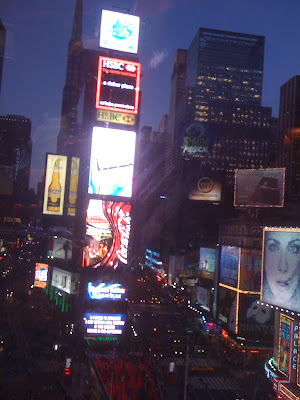 This was the skyline right when we came into town. 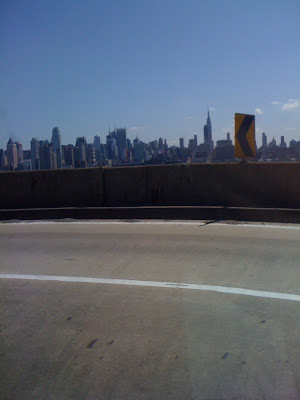 What? Another concert?! REO Speedwagon! Kicking it old school all over again! 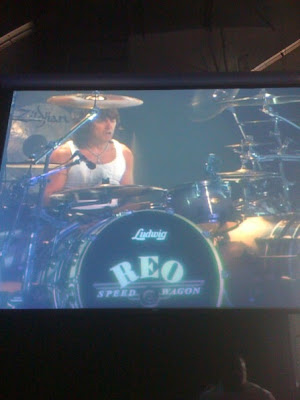 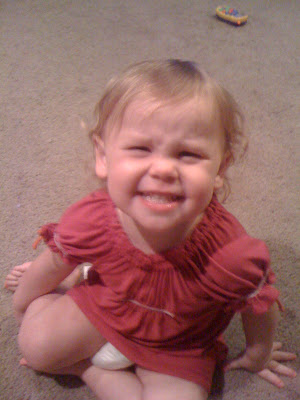 And anyone out there who is subjected to 24 hour ESPN/ Sports shows during football season may recognize these broadcasters. 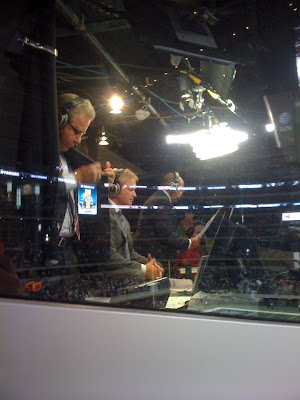 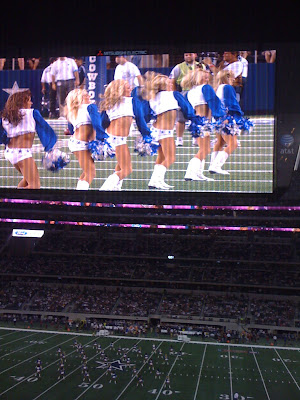 He better be deleting that one!
And another up north trip for Todd. He took a picture of his cup at Culver's. We love to eat their butter burgers when we are in Wisconsin! We don't have Culver's down here. (or butter burgers!!) 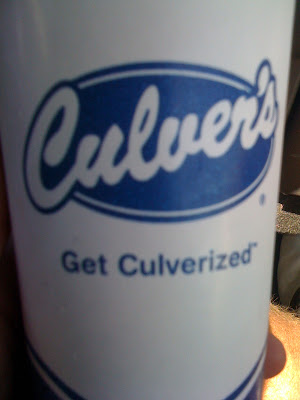 This is Todd standing next to a tree which was planted in 1995 in memory of his dad who passed away that year. It started out about 5' tall! 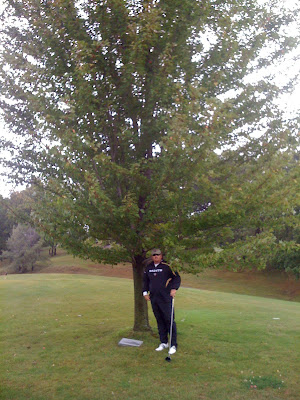 And this is Todd's granddad. He still loves playing with his sons and grandsons! 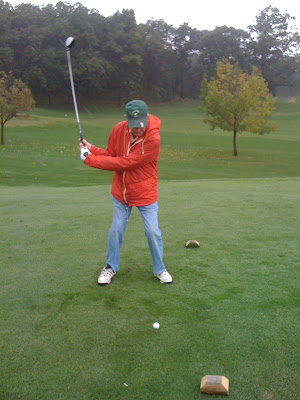 WHO is this, Todd? Is this Uncle Tim? Uncle Toby? I have no idea. 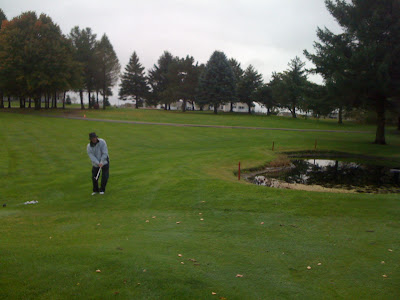 Until I figure it out... I will just continue to search his photos for more surprises for everyone!
And... who's watching Big Brother? I love that show. It is a favorite in the Groves household! I am liking Lane. and NOT liking Matt! or hayden. Just sayin'!
Mo
Posted by melanie, aka Mo at 6:30 AM

Being born&raised in NY...I LOVE the NYC pics. Nothing like the NYC skyline especially at night.
I watch Big Brother also. I don't like the 'Brigade'. Matt??.......full of himself!

I totally saw my friend on the front row in the Keith Urban pics. I gotta tell you I thought I was crazy when I saw Stacy on the big screen...surely not - then you! I could not have been more excited. I know you guys thought I was stalking you - wierd, I know. And thanks for chatting with me and taking pics after the show!

Loving Todd's pictures...NO IDEA what is on Jeff's phone and honestly scared to find out. The Acree's are NOT liking Matt either. I'm a Ragan fan!!

Love Big Brother! - Like Ragen and Lane - Matt and Rachel not so much.

These are awesome pics Mo!
I really want to visit NYC someday, but my husband has no desire to...girlfriend trip I'm saying.
Night Ranger - I was sooo into them back in the day. They are on my iPod though.

I'm loving all the Todd's phone pics! I should grab Jon's and see what he's got on there. OMG...we had Culver's butter burgers for the first time last year when we spent those six weeks in St. Louis. I must get on their website and find out where all they are located. Big Brother fan here, too. I'm liking Lane, too. He flies under the radar. Like Ragan, too but not sure his nicey nicey is all genuine...LOL. It is so silly how involved I get in these shows. But, one of my FAVORITE shows ever starts this week. Project Runway!! Don't hate but I'm going back to NYC next Sunday. I'm keeping tabs on On Location Vacations.com cause I'd like to catch some PR filming at Mood:) Only spending a few days there this time but I'll get my broadway fix for a few months. I think we need to find a bead show or an art retreat there!

Loving the posts. Too ill to post much. Peace.