Thank you to everyone for all the comments here, on Facebook, and on instagram.  I know how much I and my family are loved, and believe me, it is felt.  Even across the miles!
So, I think I am ready and raring to get back to blogging.  As I do multiple times a day, I screenshotted some of my favorite sayings as they passed down my feed... particularly on instagram.  I am always just so dang inspired while I scroll!!  LOVE this...﻿ 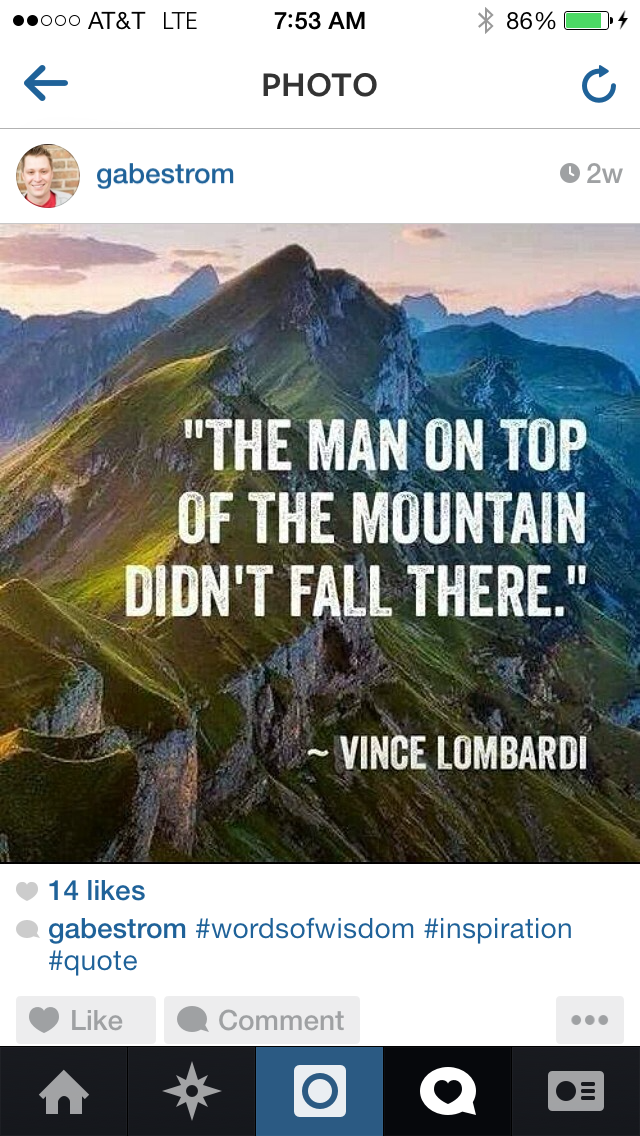 And this one too.  Not sure why it is so gigantic!  Maybe it's because it is a gigantic message I am needing to hear and pass on! 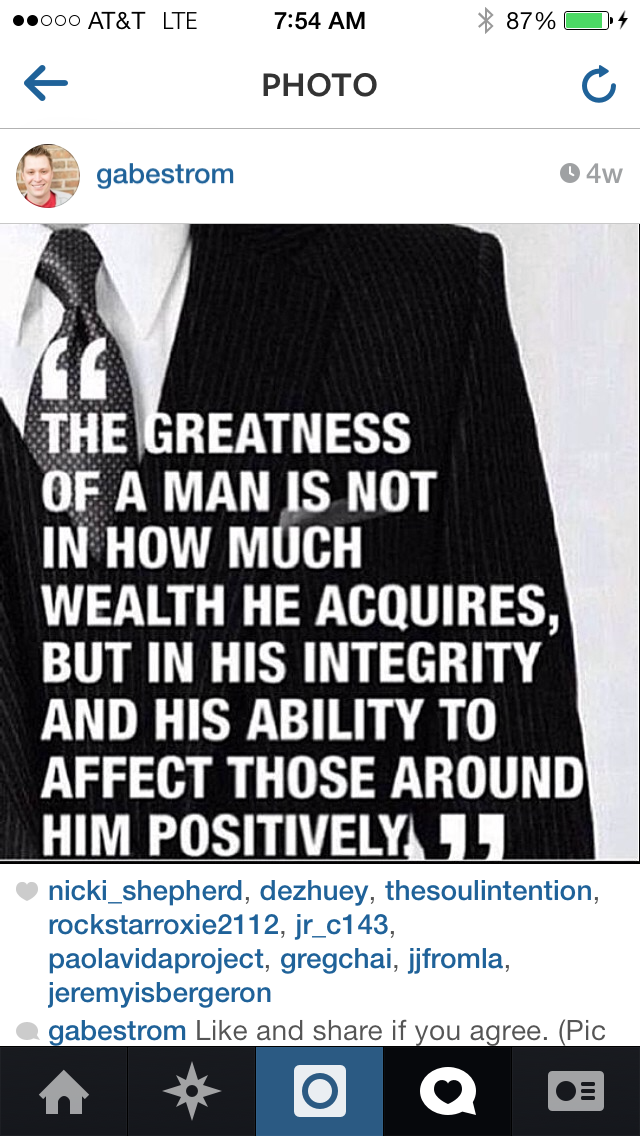 WHat he is asking here, is a question that is often a theme in our John Maxwell meetings.  Can you read it?!  Have you thought about that?!  It's a common question to ask when providing personal coaching to those wanting to go higher! 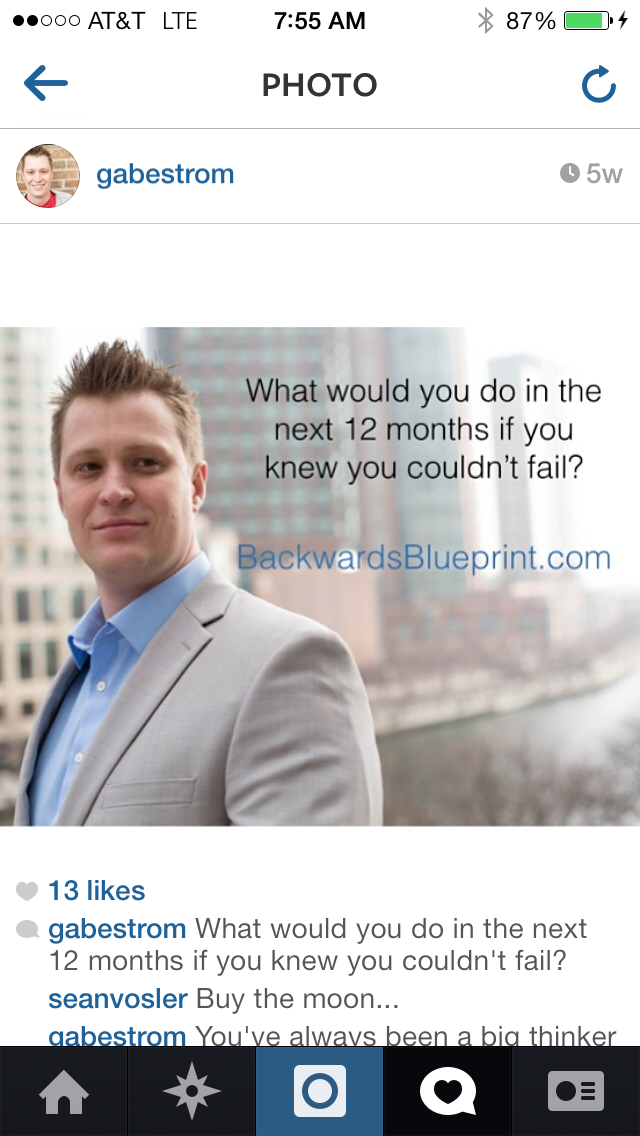 And I think this one needs to be posted in the offices of all my clinics.  I love it.  And I have always called my company "Small business", although I am not sure we fall into that category now.  There is some criteria, I'm sure. 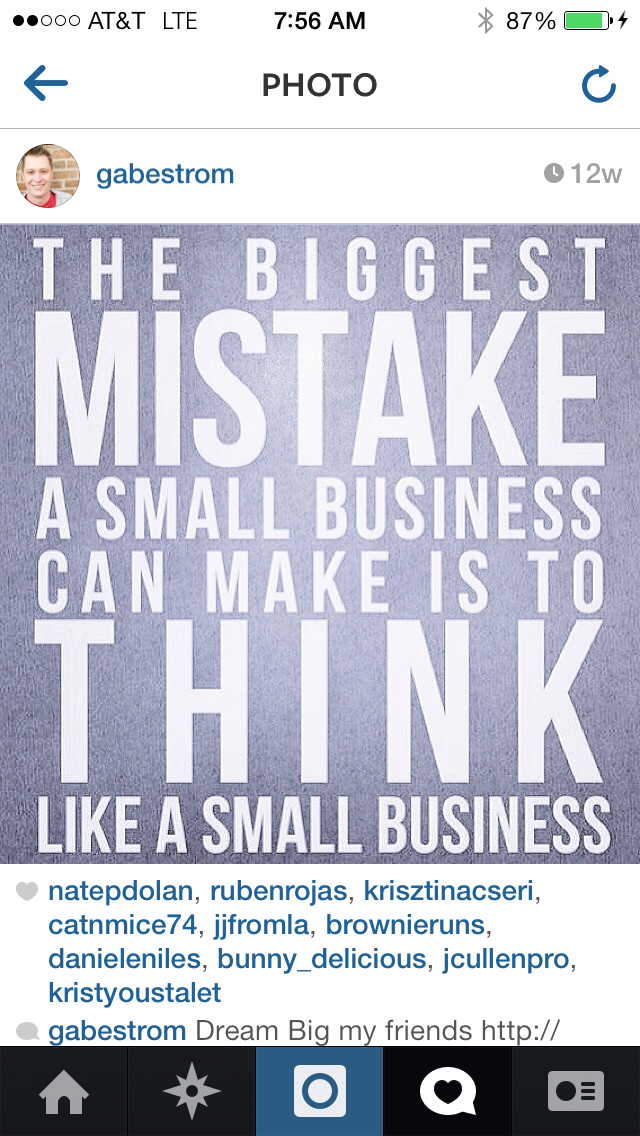 Can you even read this one?!  Is anyone here on my blog a Tony Robbins fan?  I am not, so much.  But not cause I don't like him or whatever... but more because I've never really been a student of his work.  A good friend of mine, and a personal coach to many, calls Tony her favorite, so in the near future, I might have to give him a try! 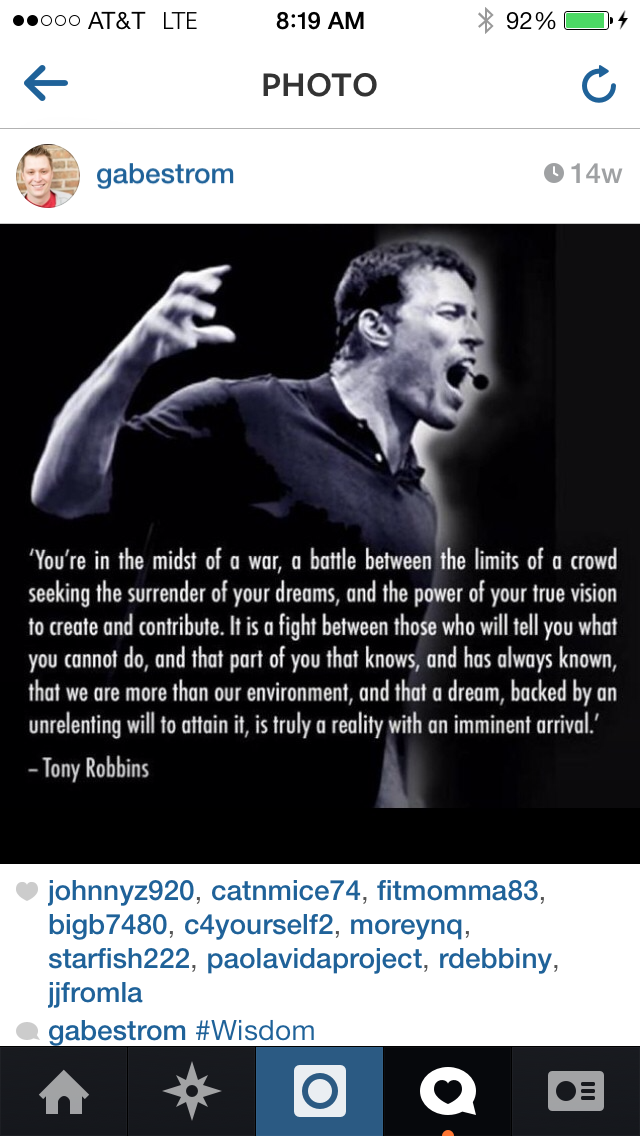 And for anyone who reads my blog and has something staring at them right in the face, but you just can't seem to pull the trigger... well, here ya go.  And you are very welcome!! 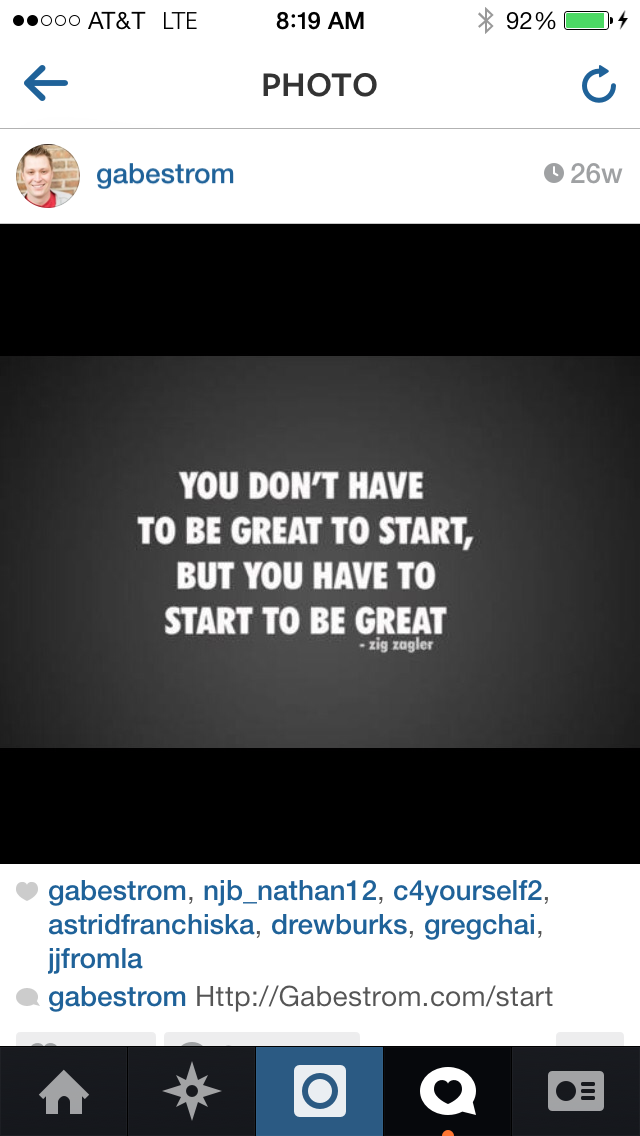 I love my nephew so much that I got up last weekend and went garage saleing for him some new furniture for his new bachelor pad.  That is love. 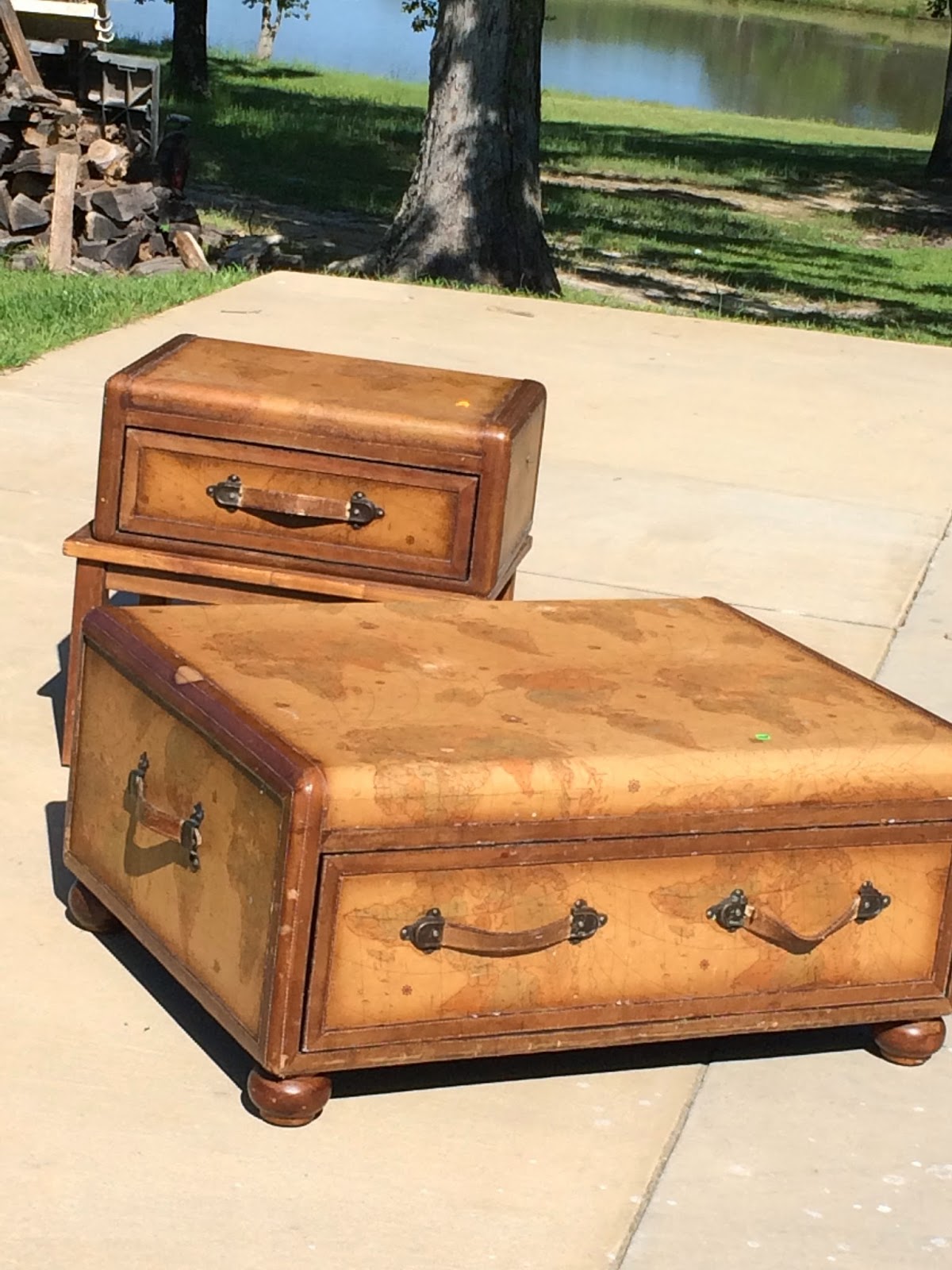 I think I sent him this picture sometime while I was out and about with my WILD and whooly hair. 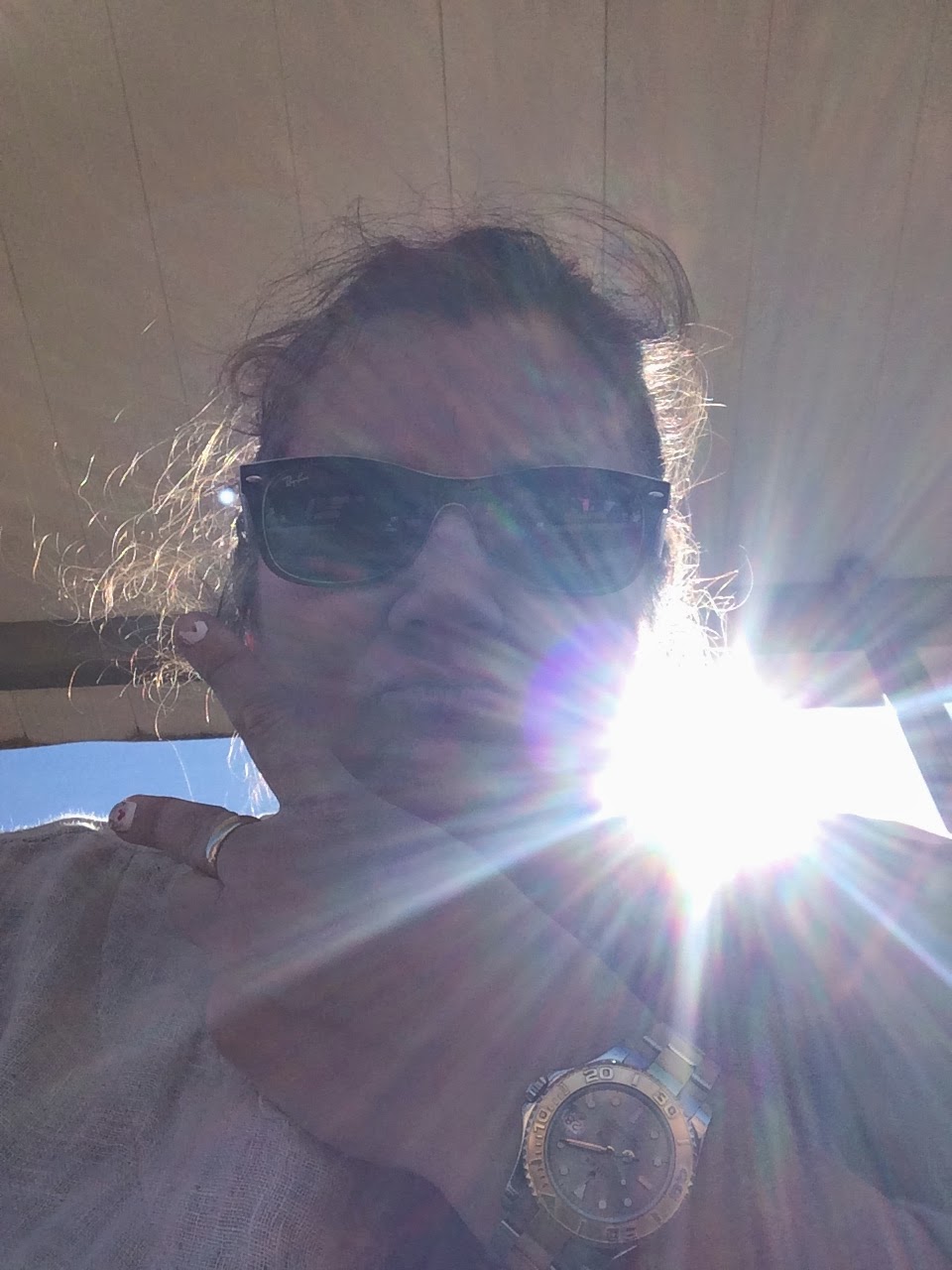 Would you believe I have had the opportunity to look at and BUY not one but TWO AIrstreams in the past few weeks!!? 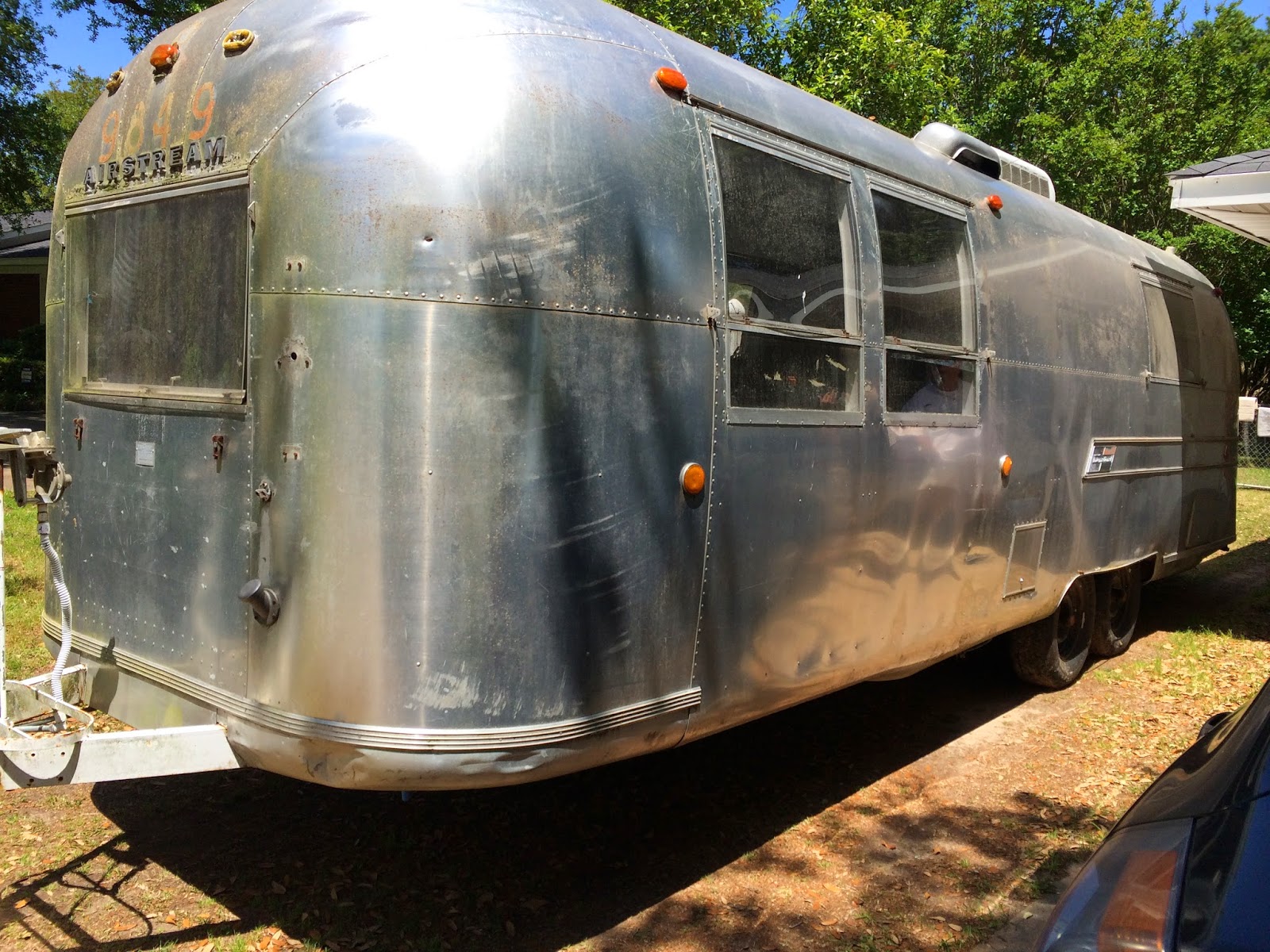 This one is a 1963 and apparently more "valuable" in the Airstream world, (although the asking price was about half the next one I'll mention). 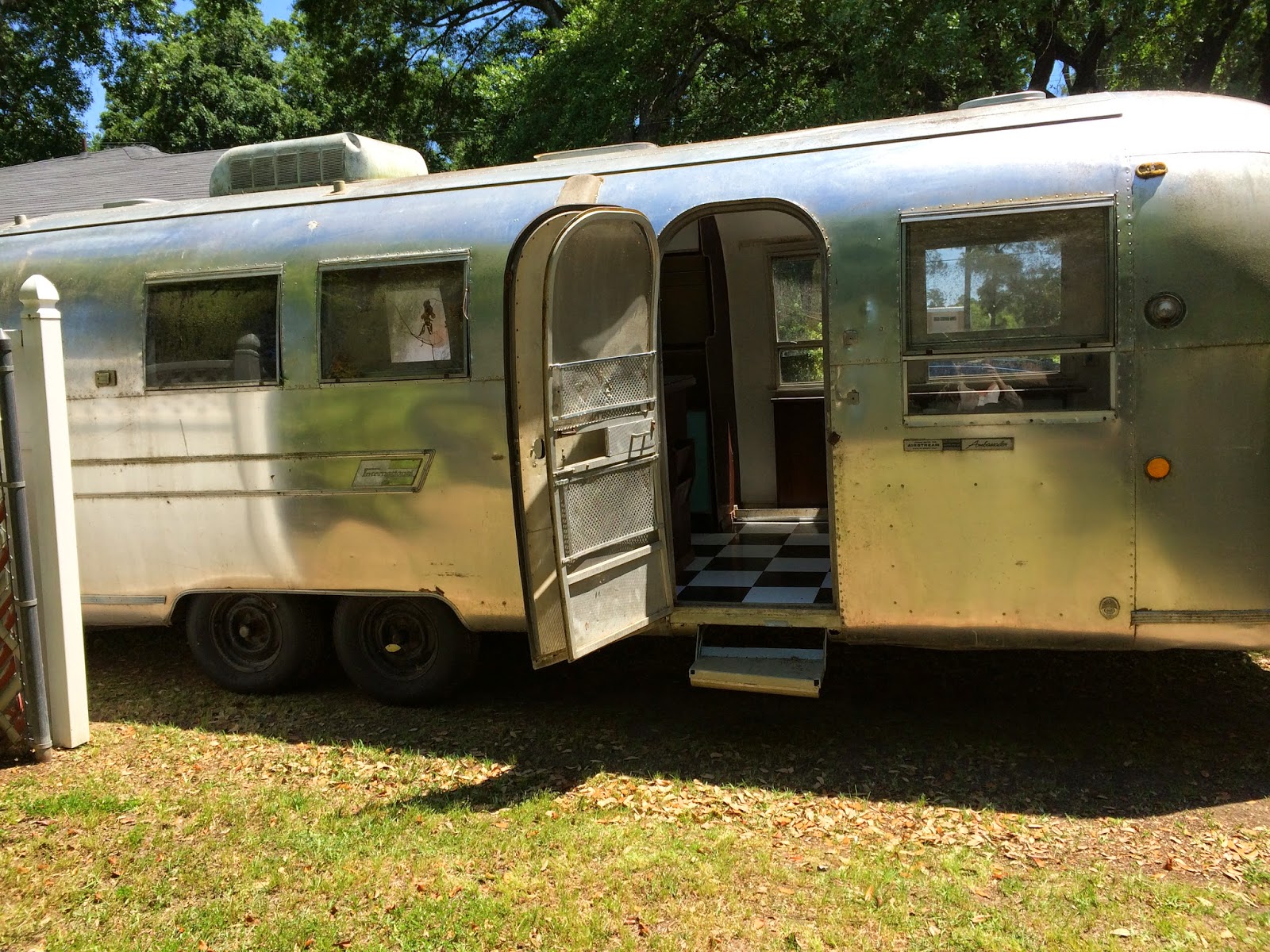 It would have to be totally redone.  I took Todd with me, and he just CANNOT see the quaintness of the whole deal.  He can't get why I wouldn't just want to get a new one and not HAVE to do all the additional work. 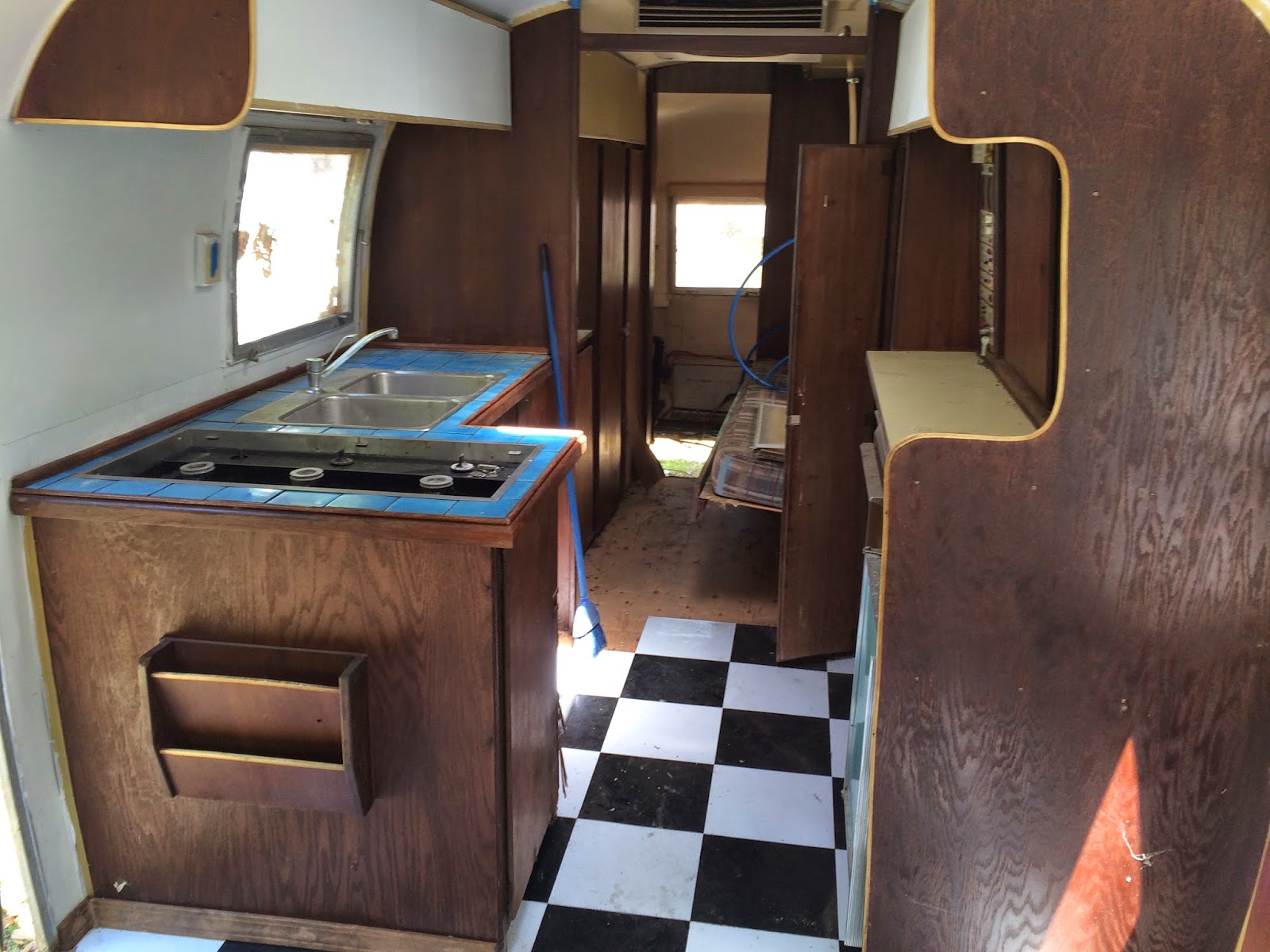 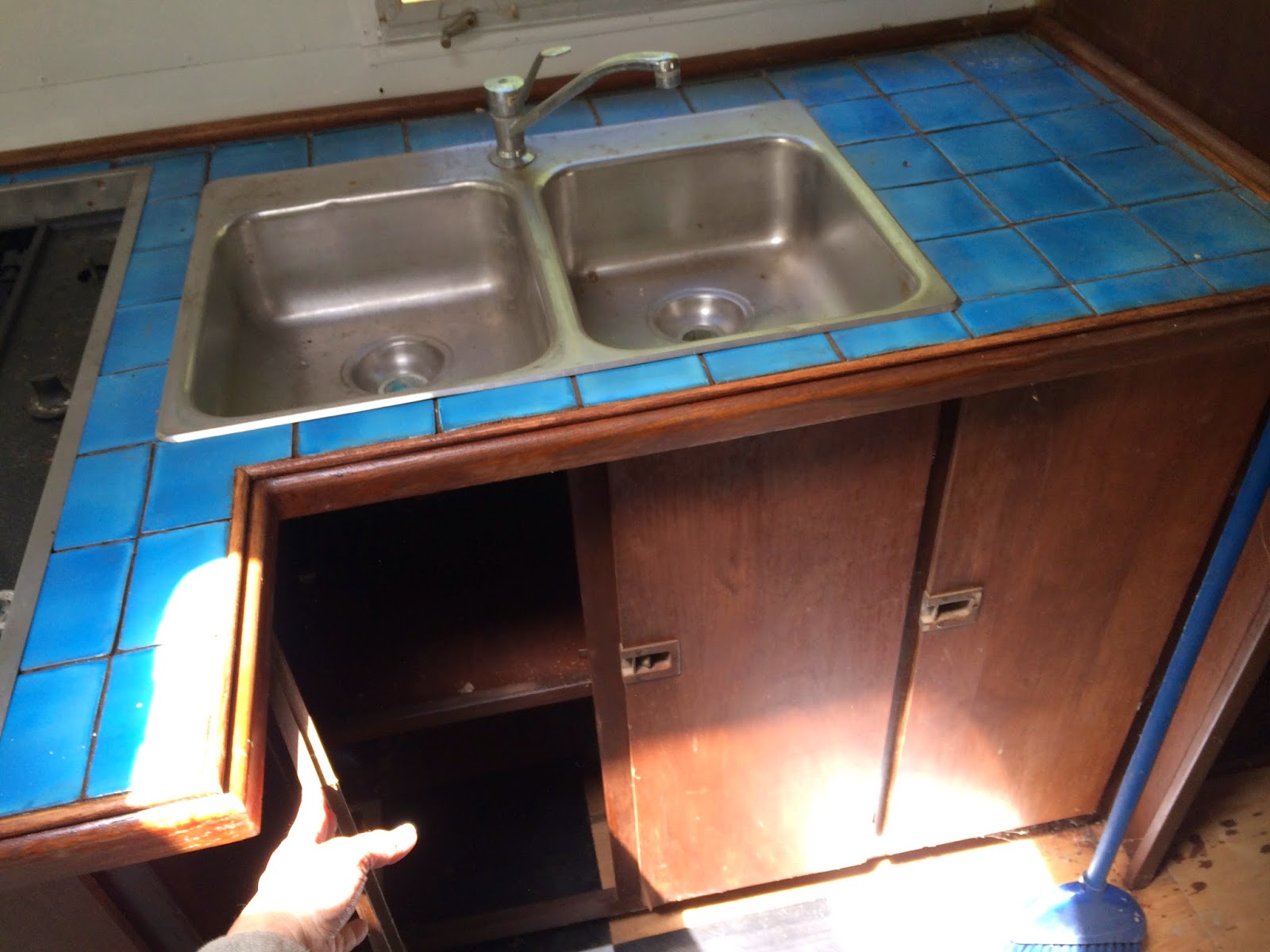 I am now a bit conflicted.  At the beginning of the year, I made a list of 100 things I wanted to do this year, and "buy an Airstream" was on my list.  I envision roaming art retreats, heading out to meet all you folks who have said, "If only I was closer".  Remember, my number one strength is WOO... winning others over.  We think EVERYONE is our friend.  We like to meet and get to know as many people as we possibly can. 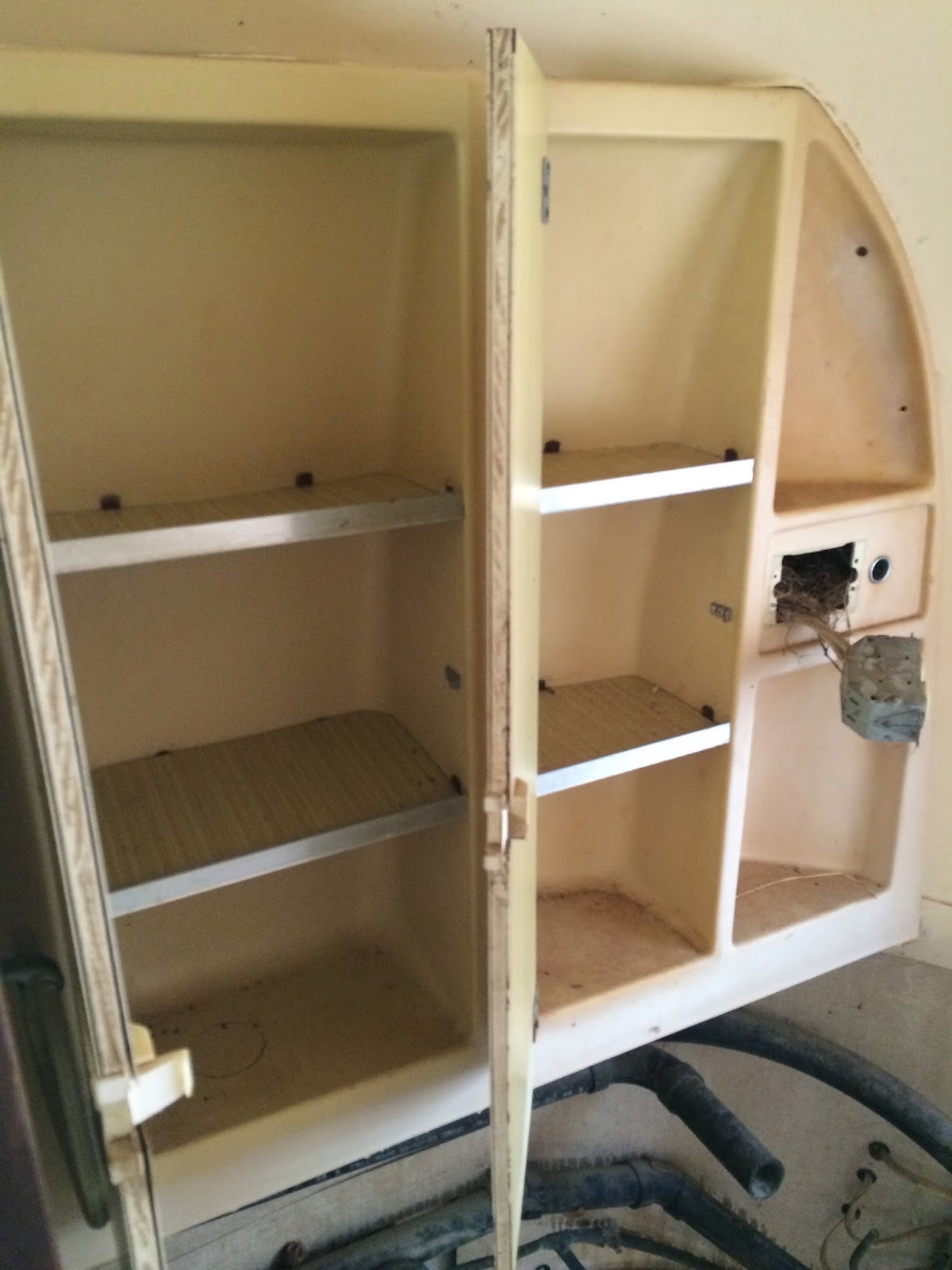 So what do you think?!  Let's have some feedback.  Help me figure out other reasons an Airstream (vs a more updated, ready to roll camper) would be useful. 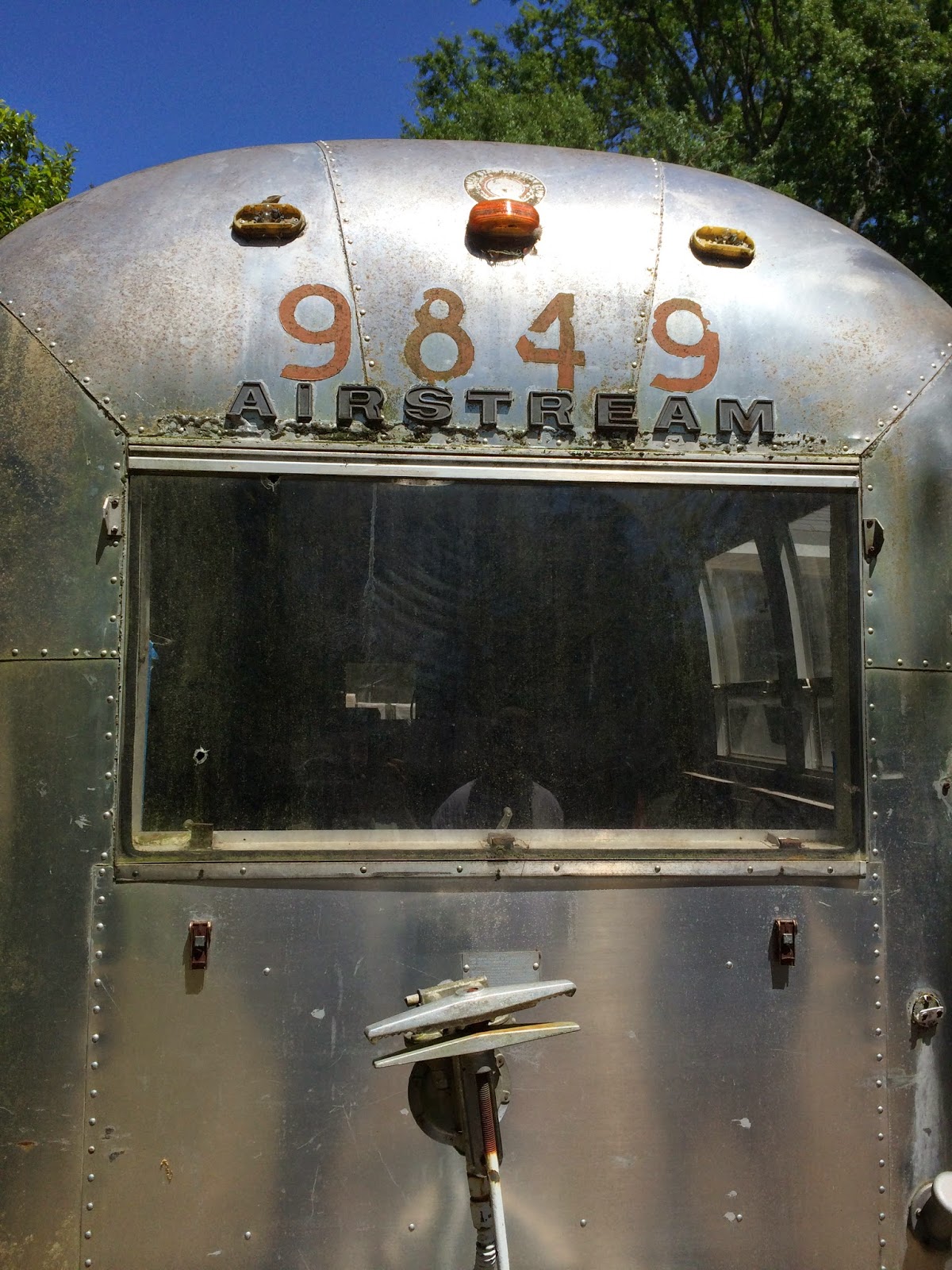 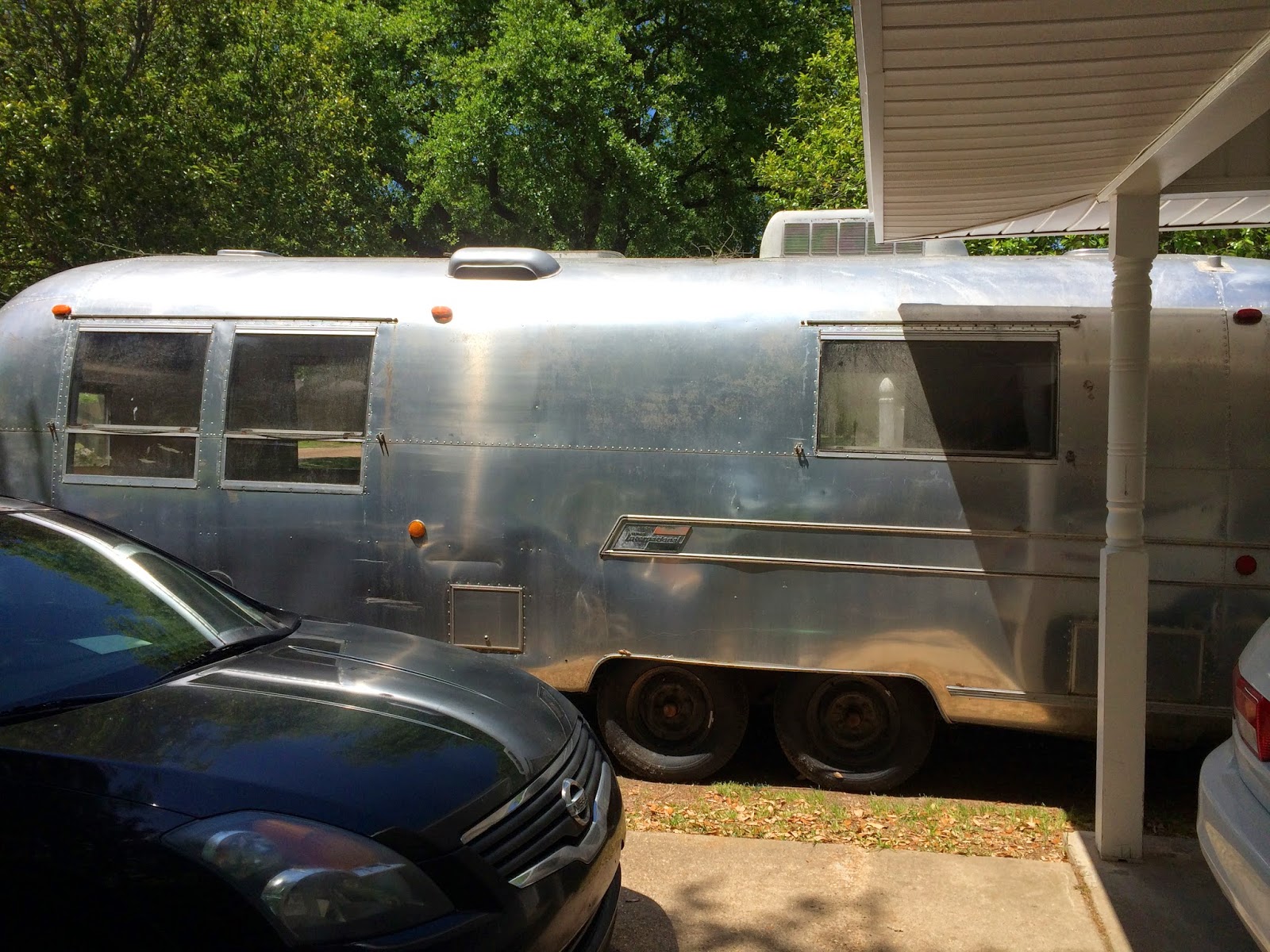 This was two days after we got out of the hospital.  Sarah, from our old 'hood, came over to help me keep Ellie calm and quiet.  and entertained, above all! 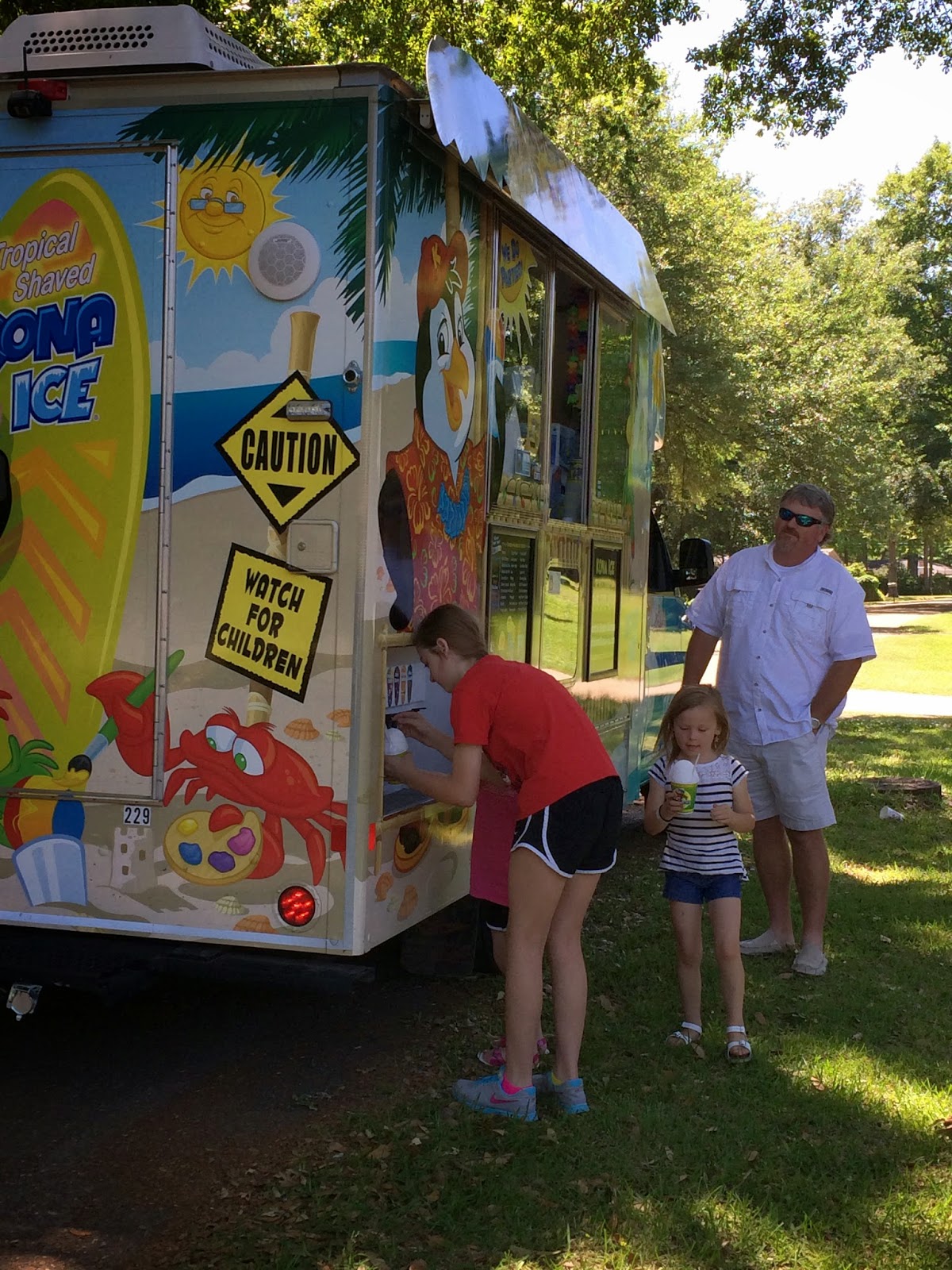 They rode with us out to see the campers. 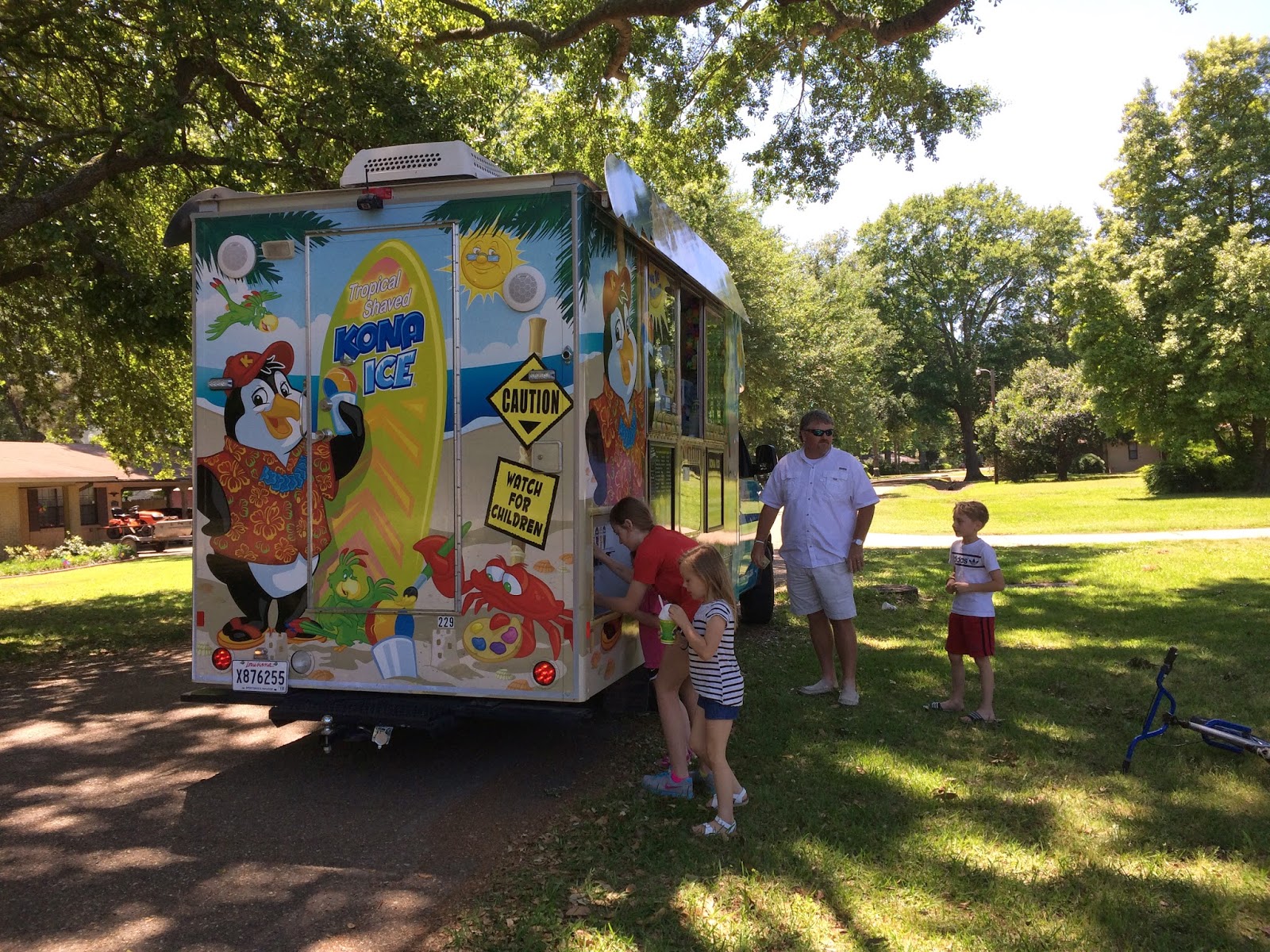 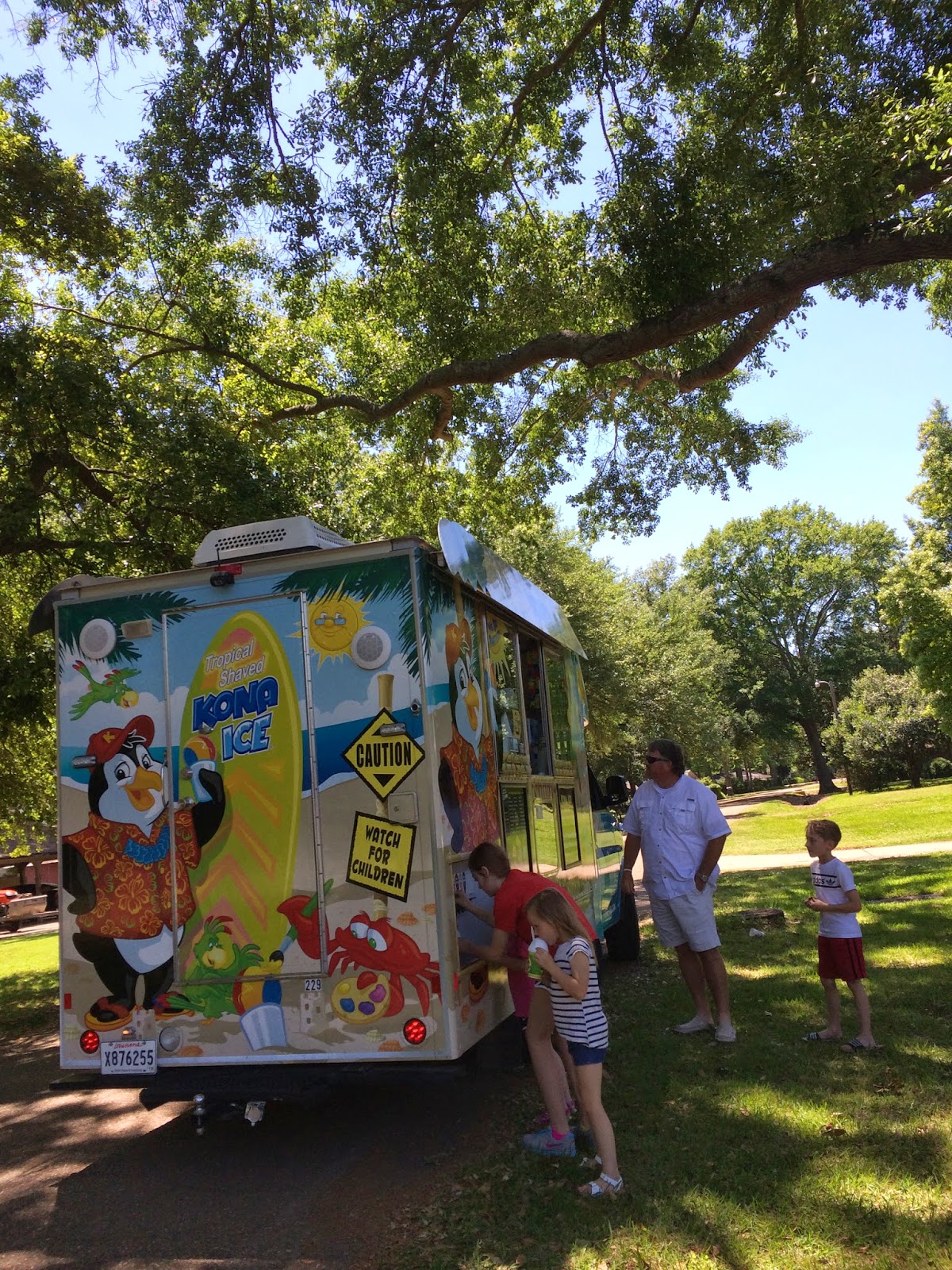 On our way out of the neighborhood, we spied the snowcone truck.  HAD to stop!! 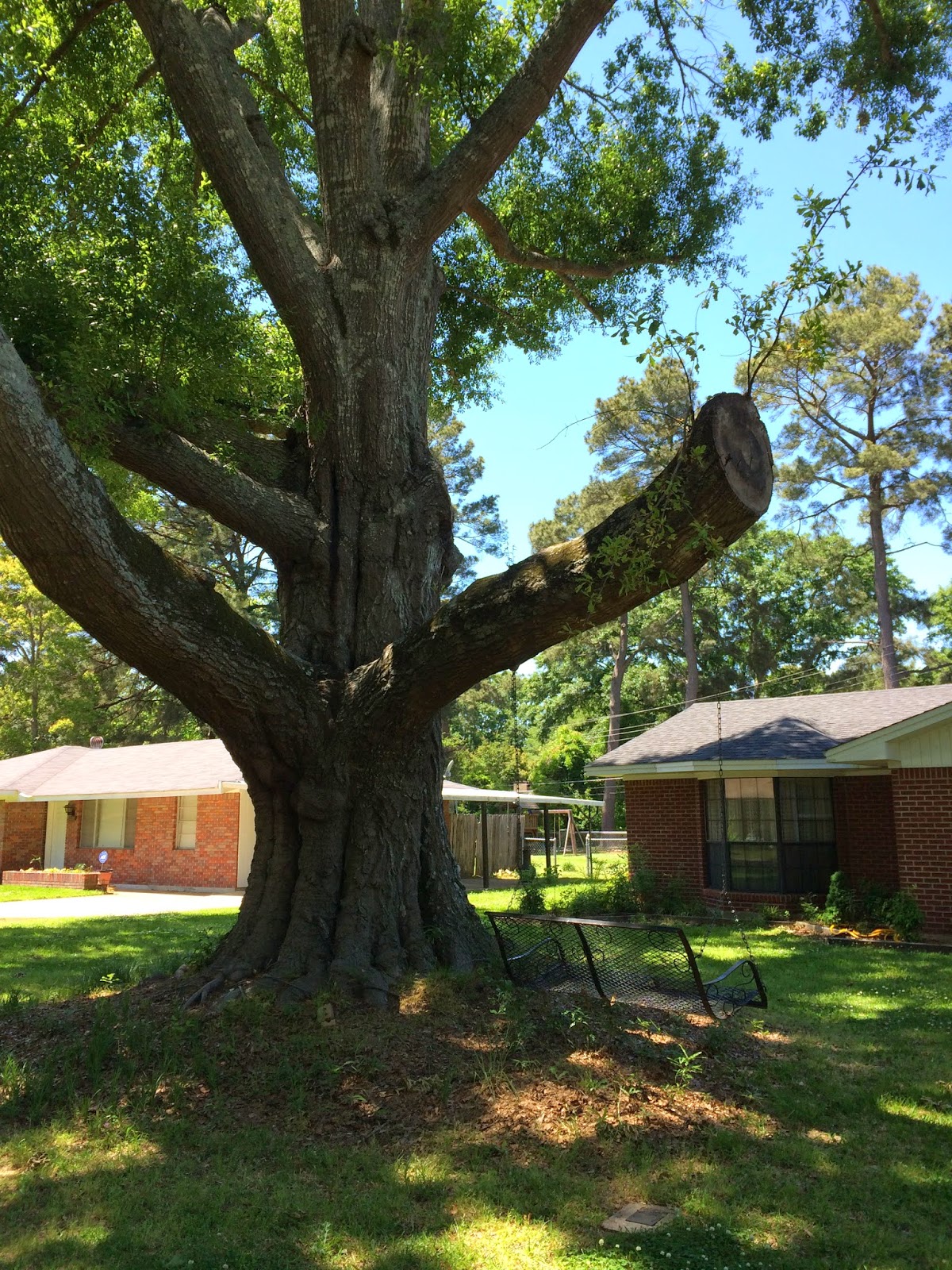 I LOVED this gigantic tree.  And I totally appreciated that when this tree apparently needed a little amputation of sorts, they just added a swing.  There.  Perfect! 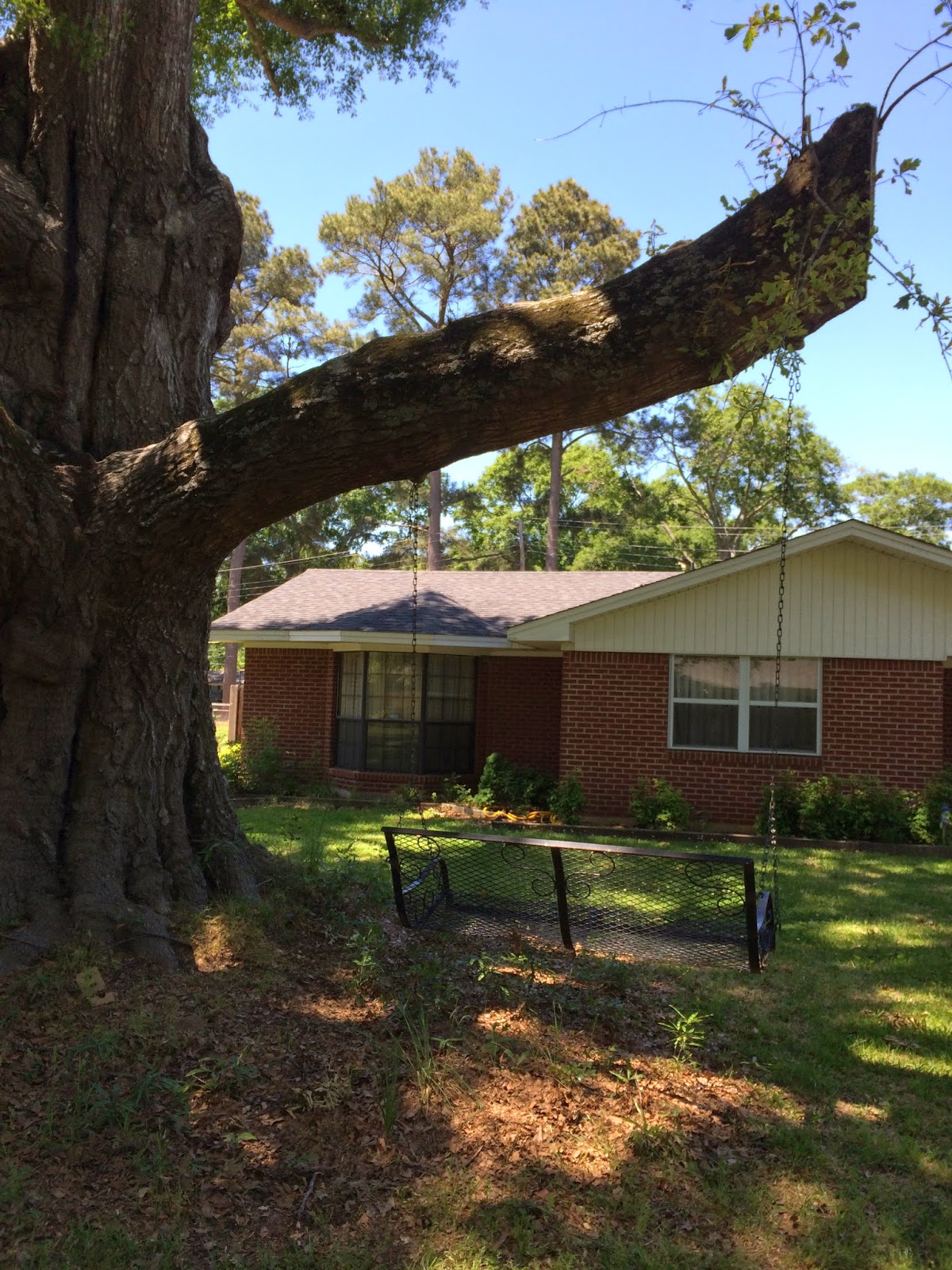 I asked the girls to go stand by the tree so I could remember how HUGE its trunk was.  This tree had been there a LOooooong time! 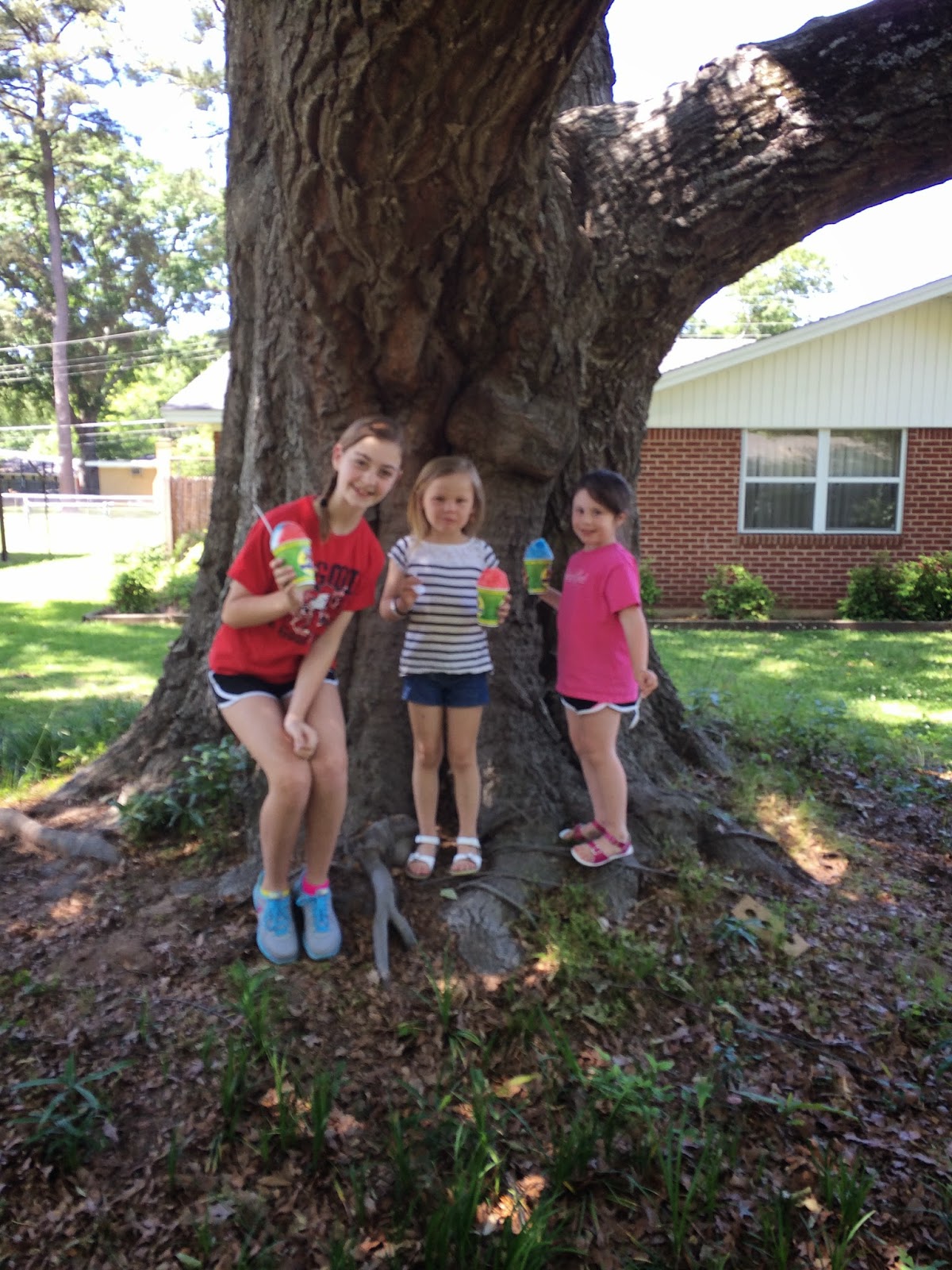 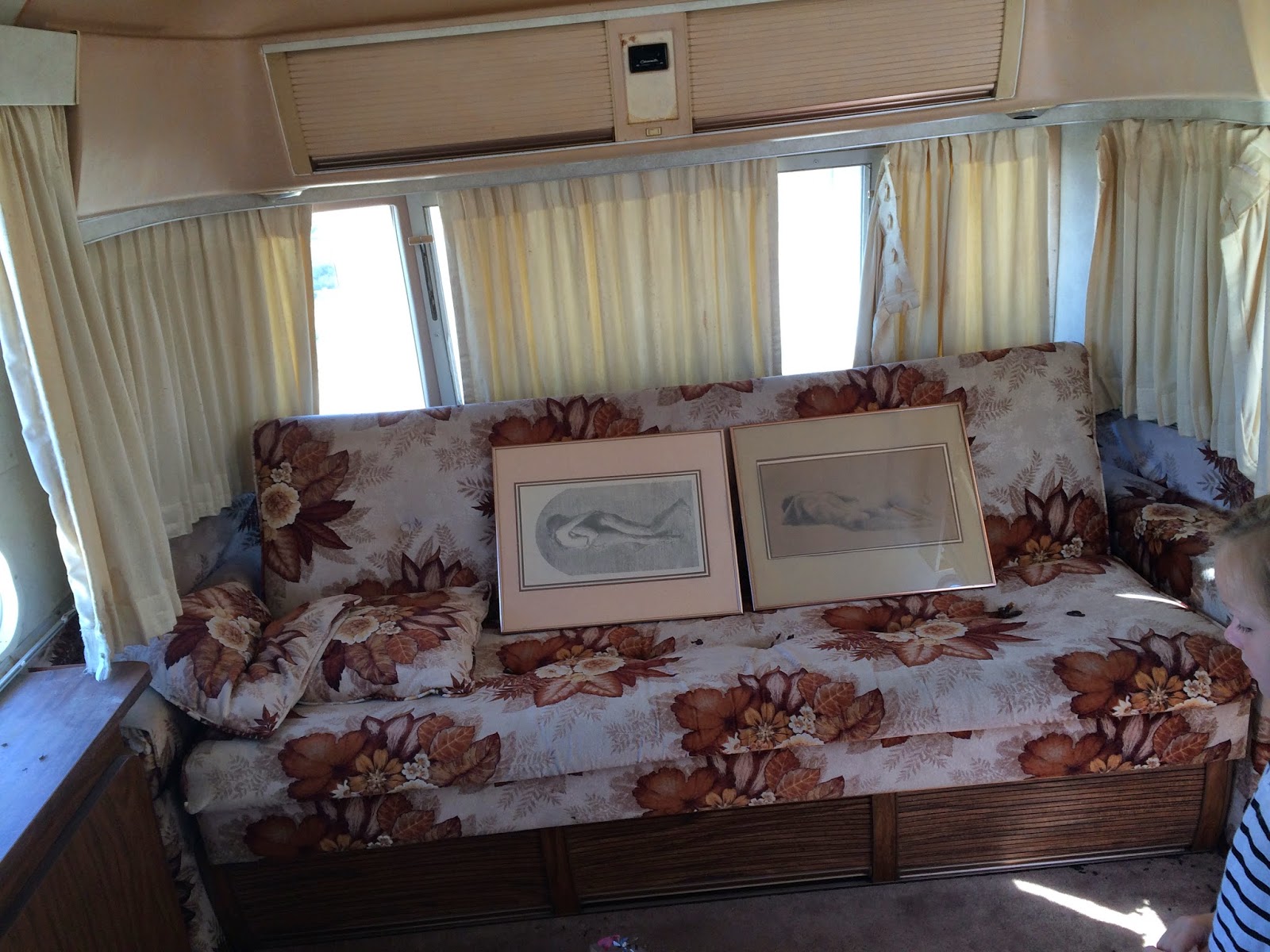 There were strange naked pictures handdrawn inside.  But, who's judging?!

We also heard some sort of animal trapped inside also scratching around.  It was SPOOKY!! 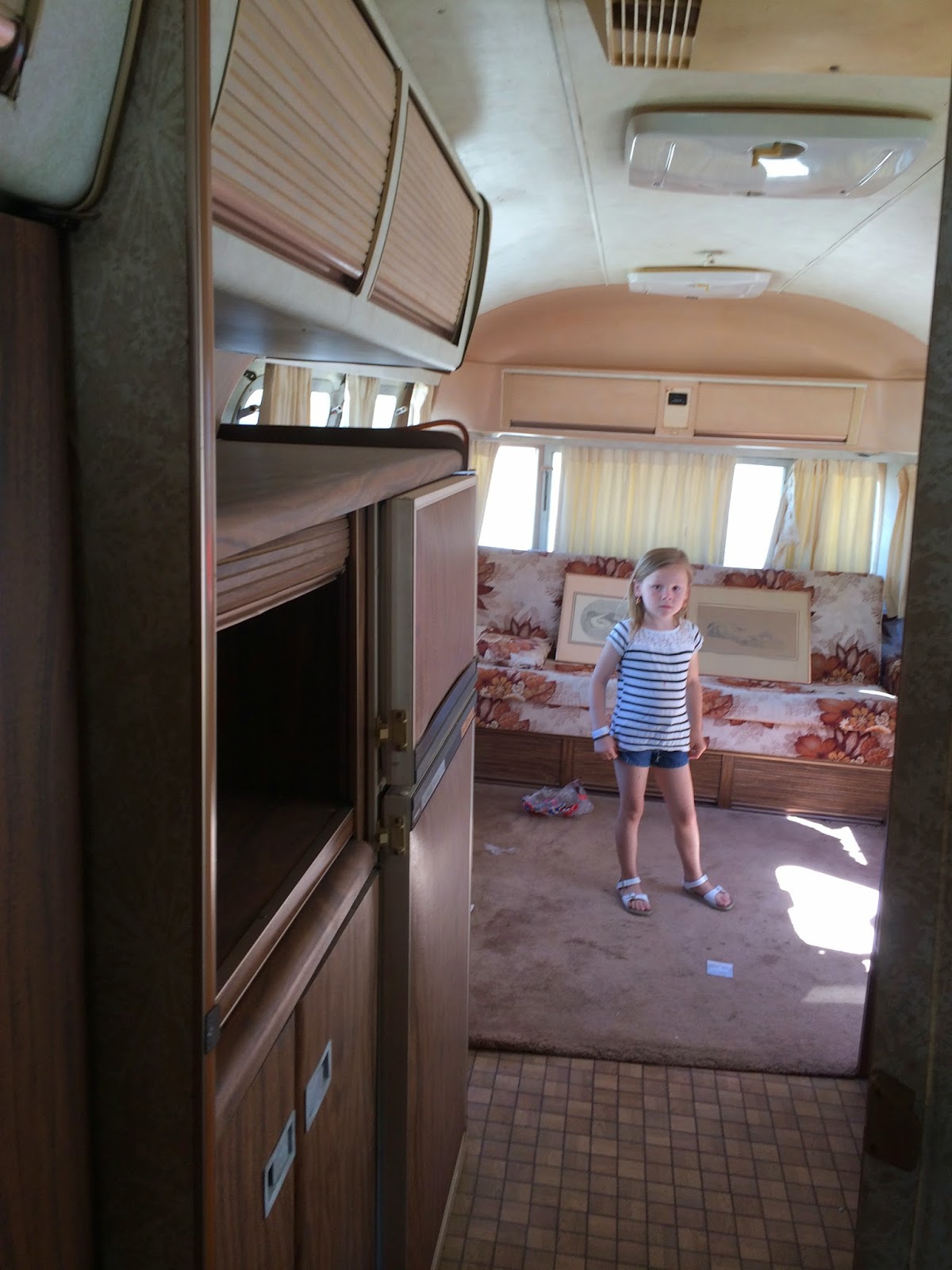 Nosey Ellie got out of the vehicle, despite our asking her to stay put, and when she came inside with me and Todd, she shut the door.  and like that... we were LOCKED in!  With some sort of varmint scratching around inside a cabinet.  Todd went into straight up panic mode!!  He suddenly became a locksmith, mechanic, metalsmith, all wrapped into one.  I kept trying to speak calmly and remind everyone we were fine, but I was a wee bit panicky too.  It was like a microwave inside that thing.  I realized I had my phone in my pocket and called Sarah, who had listened to me and followed the directions of remaining in our vehicle.  She came, and after some fiddling, she finally figured out how to let us out.  Todd said, "I wasn't worried.  We wouldn't have been in there another 5 minutes! "  I think he was about to bust out a window and put Ellie through feet first!!

So, let's hear from you...
first think about, "what would you do in the next 12 months if you knew you wouldn't fail?!
And do you know anything about a 1963 or 1974 Airstream?  OR campers at all?!
And, do you think a travelling art retreat/ paired with personal coaching/awareness session would be an exciting and potentially viable idea?!

Oh my goodness I laughed so hard at the story of y'all being locked in there with some sort of noise/animal! Yay for cell phones!
If I wouldn't fail... I'd go back to school or take some sort of class, definitely workout/lose weight... Not sure what else.
Personally I wouldn't buy either airstream, I'd go for a new/newer camper. And yes, travel and spread your inspiration and wealth of knowledge of art!
Thanks for sharing these quotes today!
Happy Mother's Day.

If I knew I wouldn't fail, I'd definitely go back to school. I've always wanted to be a nurse; but the older I get, the less confidence I have in myself. I would LOVE a traveling life coach class. I'm not very artsy, but would love to have you as a personal coach! You are so motivating!
And I know nothing about airstreams or campers. But think I would have rather had a nice, new one that I didn't have to remodel/redecorate. Again, as I am not crafty and have no decorating skills! Sorry I can't help!

BTW... I'm in Minnesota, so put me on your traveling map when the airstream is ready to roll!

If I knew I would not fail and I could take a year off work, I think I would pursue additional education -- maybe something that would make a second (different) career possible... I know nothing about campers. Though I appreciate the charm of a vintage one I'd go for a new one. You have so many other fun ways to spend your time than renovating a potential money pit. :) If the road show came to Birmingham I would definintely be interested in joining the fun.

I think an Airstream (vintage) fits you and your style..sorry Todd...

I don't think the airstream would be a livable and workable space in one. You would have to choose one or the other. And newer campers have bells and whistles, but none really have the versatility of an airstream. You wouldn't get workable space in a new camper that you could if you remodeled an airstream to include workspace. And I don't think you have the time to "camp". We had a camper when our kids were small and it was tough with sports and work and school. And ours was parked in an established campground with tons of friends as our neighbors. We never pulled it anywhere else. And it was a lot of work to go camping. Now that my kids are older I wish my husband and I had one to travel in and do some exploring lol

The twelve month thing is hard. You automatically gravitate toward money, but that would not benefit in the best way possible. I don't think I could choose one thing. Have to think on that a while.

Glad you are back to blogging. And so glad Ellie Sue is better. I love the stuff you got for hunter! And the dress for gg was fabulous.

I appreciate and love history in furniture, etc. but sorry, I'm with Todd on this one - I want new!

You know my opinion on the travel art/coaching...love it!
Ever since you first mentioned the airstream, I could envision it, with you Mo-izing it. That being said, I have zero knowledge about any type of camper. Sorry, I have nothing valuable to share to help in your decision making process.
If I knew I wouldn't fail (and could dedicate the time to it), I would start some creativity ministry to help others.
I don't think I would have handled being locked in the airstream with some critter, very well, either.

If I could do anything for the next 12 months and now I wouldn't fail, I would probably stay right where I am and doing what I'm doing.

I grew up in a trailer pulling/camping family. We had a 36' Holiday Rambler. It was great. We traveled and camped with people we knew and met lots of new people. I would probably go new, if I had the chance. The new camper trailers have more room with the slide out options. Our family of 5 (and various pets) could get pretty crowded in the trailer. We did learn that it's better to have established sleeping areas. The pull out stuff looks okay in the beginning, but everyone has to go to bed at the same time in those cases. Separate sleeping areas were better for the individuals.

Don't know much about campers, but given the spectacular job you did with your home interior, I would say buying one and remodeling it just like you want it would be the way to go (for someone so wonderfully artsy like you!). However, I can see Todd's view as I personally would favor buying a new one. Biggest concerns with an older one would be (1)reliability since you wouldn't want to inherit someone else's problem and (2) life span cause if you are going to spend $ re-doing interior you want it to run well for many more years.

We have a 34 foot camper trailer that we bought new about 7 years ago. Love it! We spend time each summer traveling in it with our 5 kids. I'd definately go new. But I'm a girl that likes some creature comforts and the newer models are full of them! In fact we are looking to possibly get a new one this year... The call of the dual kitchens is calling me. Our current one only has an indoor kitchen and I am in love with the idea of an outdoor kitchen as well. Traveling with a camper can be a lot of work and those bells and whistles can take a lot of the "work" out of it. Less work means more time to play or craft! Can't wait to follow along on your newest adventure!

I'm not much of a camper type person but the first thing I would do would be fix a handle so I could get out of it from the inside. I'm so thankful that Ellie is better - prayers from NC were with you all.

What I would do if I knew I would succeed: have a baby! We're 1/3 of the way there. WE've had 2 miscarriages this year but have chosen to try again and BELIEVE.

If I knew I wouldn't fail I'd train to run a half marathon and get hot for my next vacation to Mexico with my husband!