From Ski School to Gondola 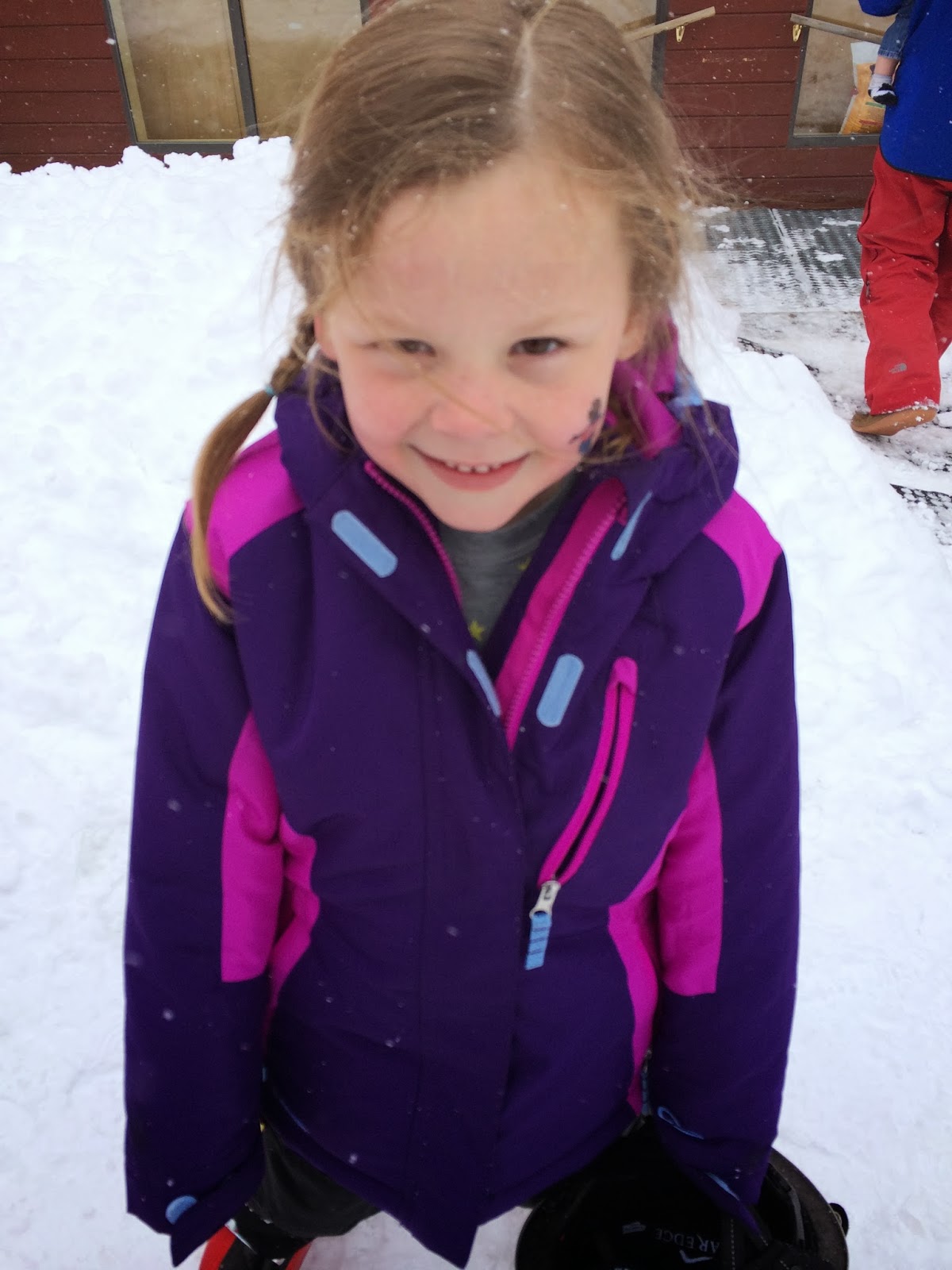 They made it through Ski School.  I was a little nervous dropping them off, and after I was contacted TWICE and refused to go get Gabbi (I'm not a mean, heartless wench.  I just KNOW my child!), I was really, really nervous about picking them up!  I thought those ski instructors would think, "What kind of mama ARE you?"  But, BECAUSE I didn't go pick her up with her first attempts at pitiful, she eventually put those skis on and was skiing down the hill when we arrived. 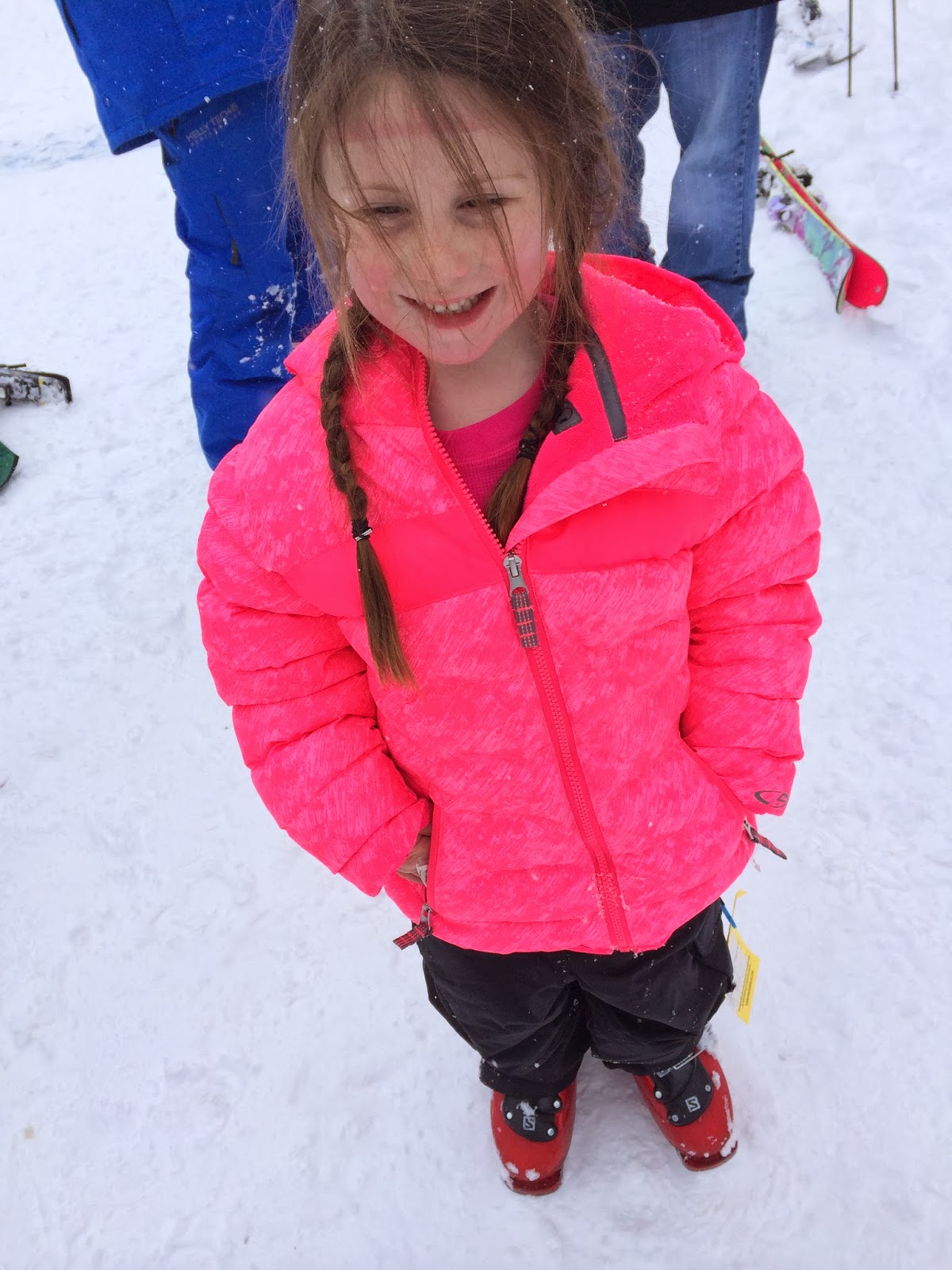 And by "hill", I mean a barely perceivable decline.  NOTHING like what was to come the next day on the mountain.  We had them signed up for two days.  And actually, I WISH they'd stayed for both days.  I think they learn the very, very basics on day one.  Like, how to slip your ski boots into your skis.  And Ellie was able to tell me how to sit down and get up properly (I think Gabs missed that lesson!).  She knew about how to slow herself down by forming a "pizza slice" with her skis, toes together.  Gabbi missed that too. 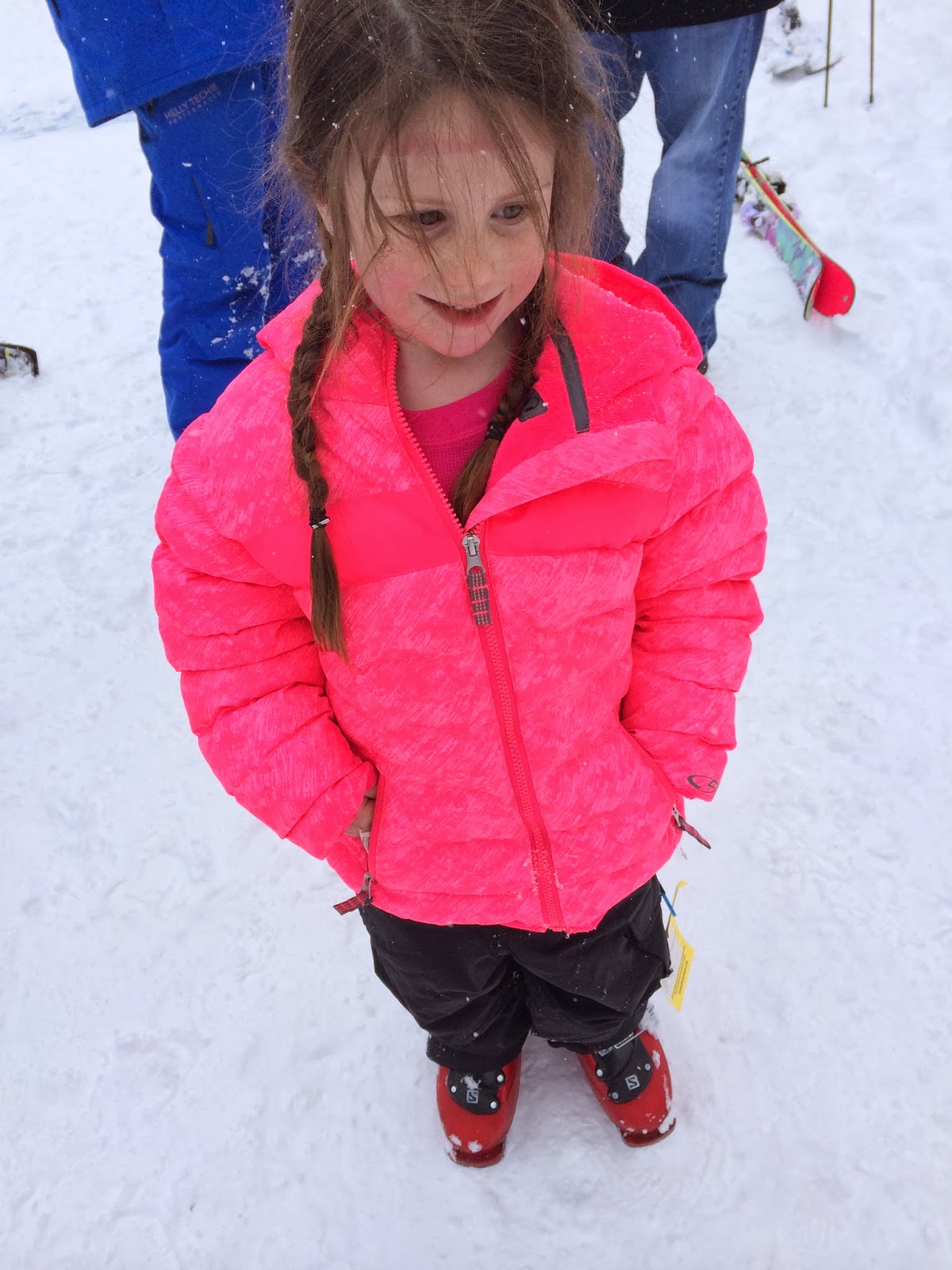 It would've been MAJORLY helpful had they gone back and learned how to cut back and forth across the mountain to maintain a slow, safe speed.  Todd eventually taught Ellie, and as you'll see in forthcoming videos, even Gabbi got the hang of it, with the help of her daddy.  BUT....it was hell on his back and this was one nervous mama as she watched her six-year-old screaming down a steep hill, fearlessly. 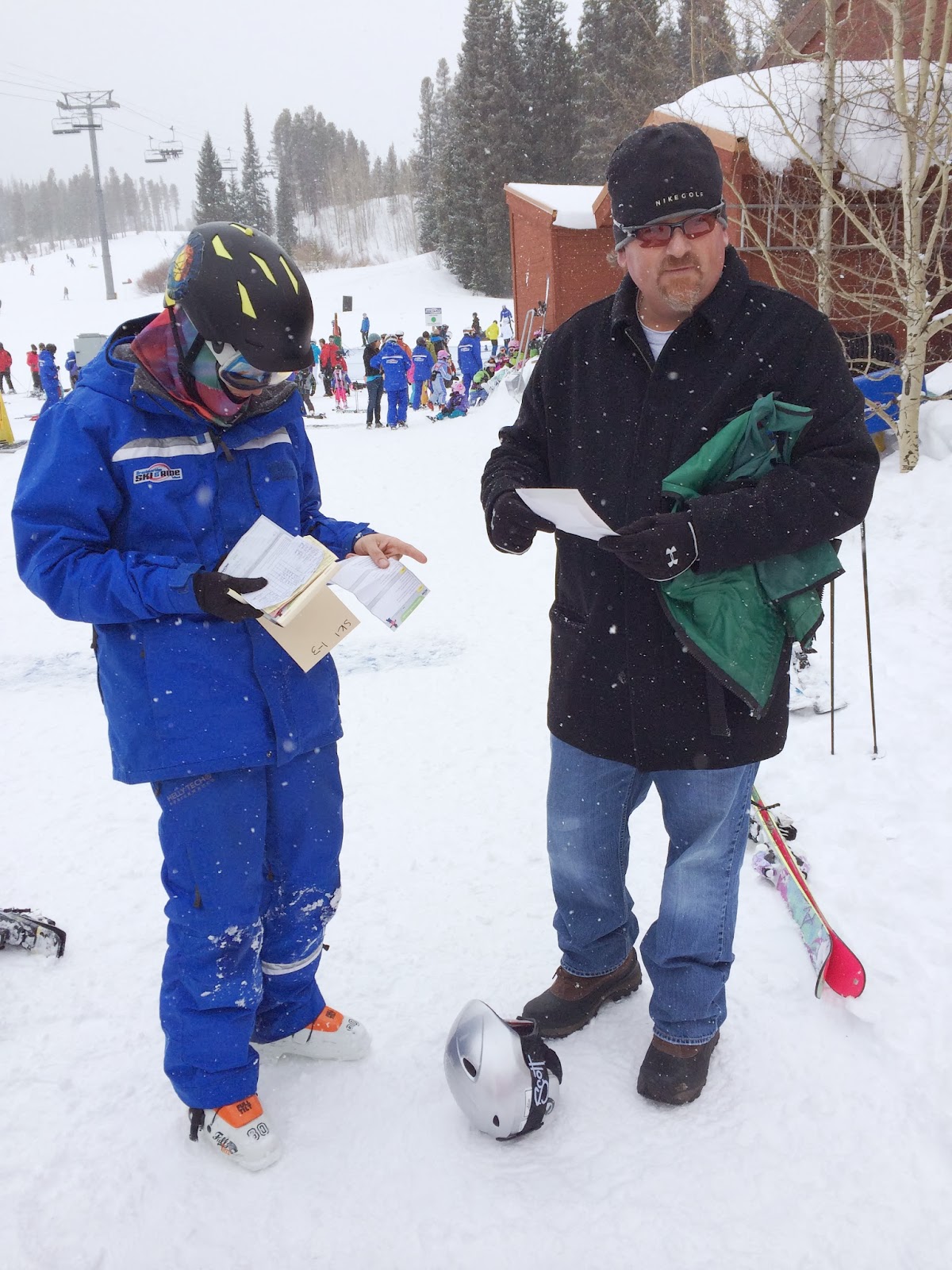 This is the Ski School, at Beaver Run, in case anybody needs this information. 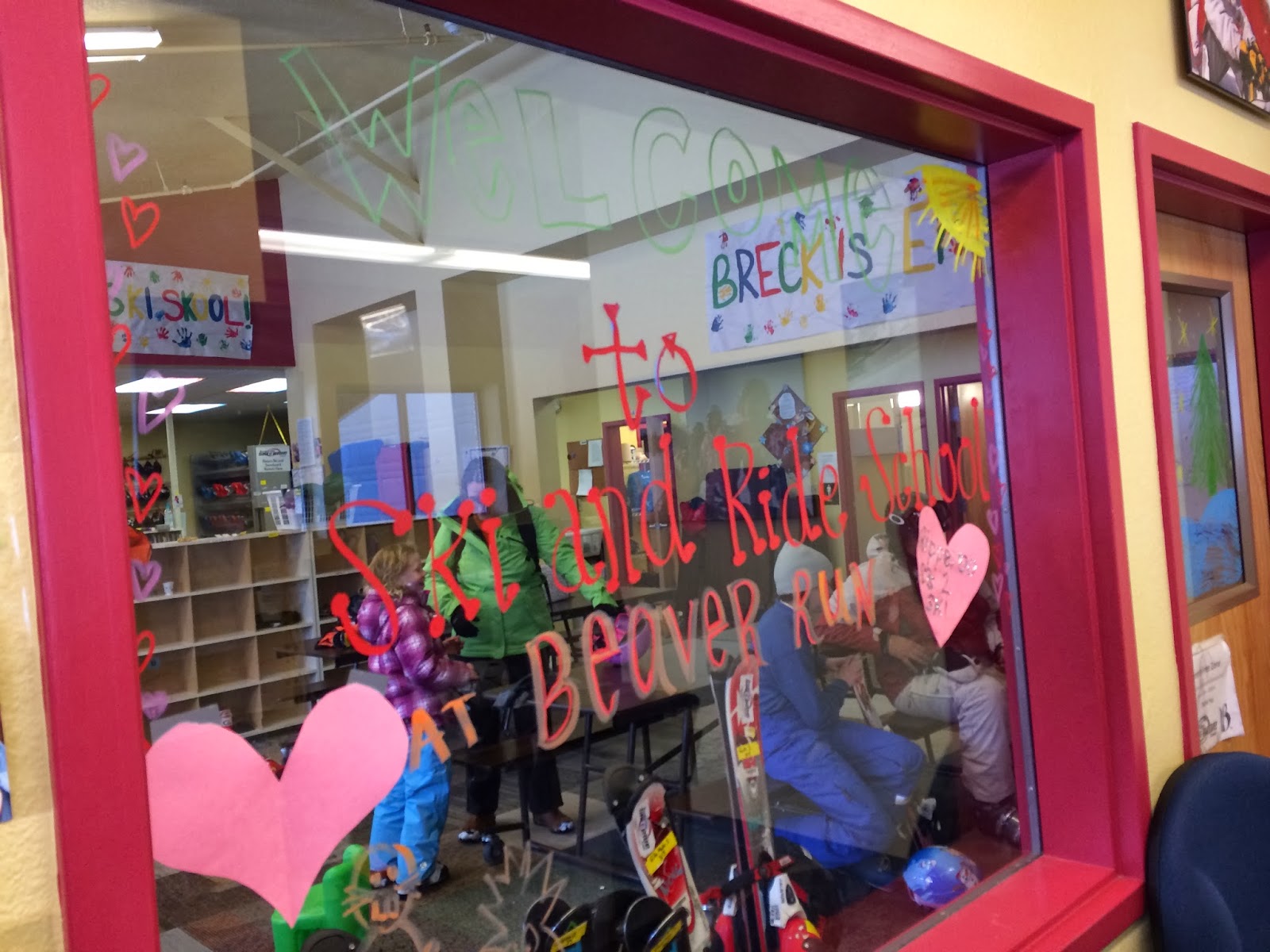 Next year, I'd really like to see the girls in small group instruction up on the mountain.  I loved watching the instructors up there, with about 3-5 kids, all following behind her/him in a zigzag, safely and slowly all the way down.  It was a good opportunity for them to learn the basics.  I have a strong suspicion that Ellie Sue Groves is never going back to the "baby" ski school!  And we gotta remember, she has a year on her baby sister in age! 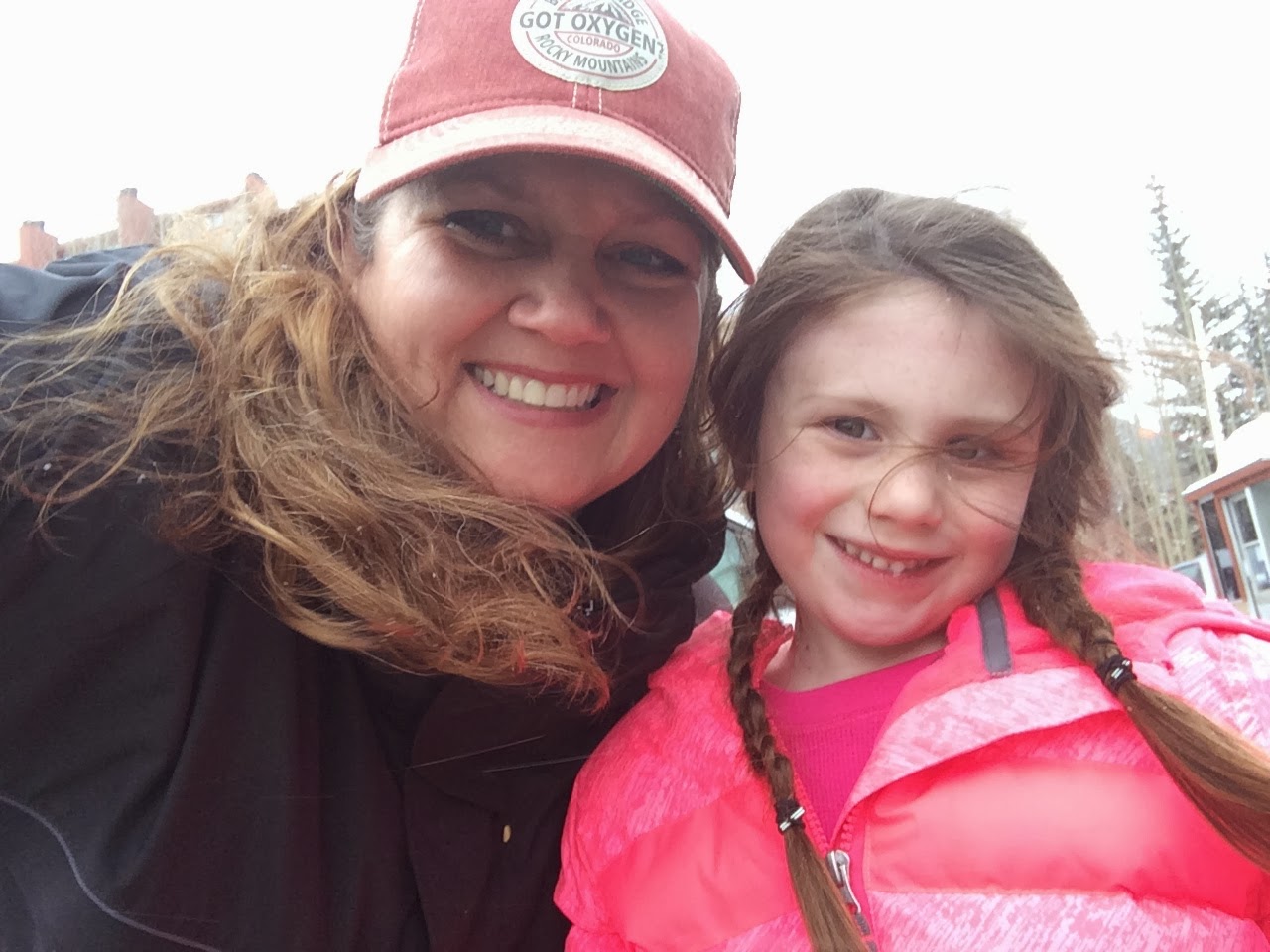 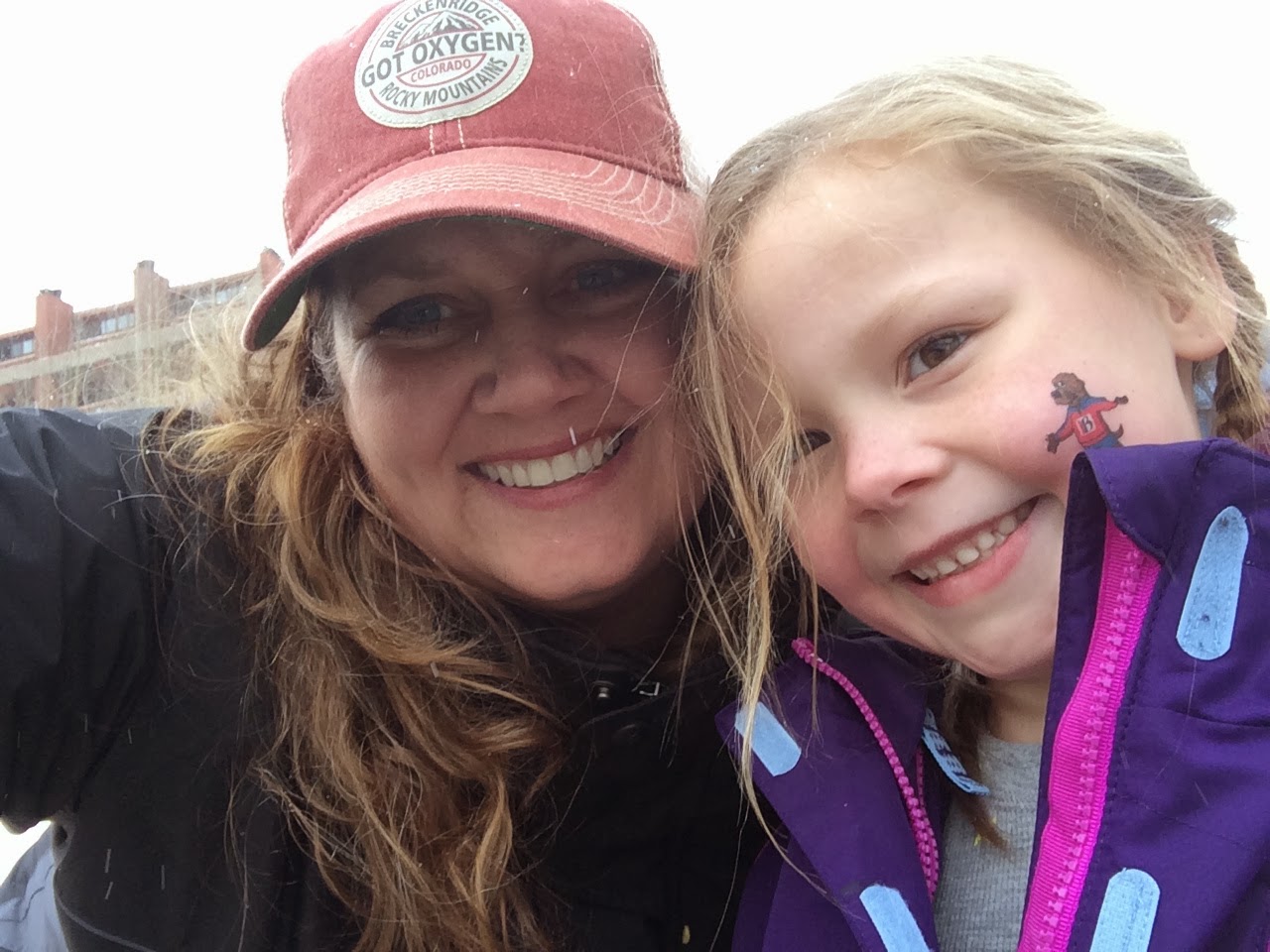 Daddy might think he has an Olympic hopeful on his hands! 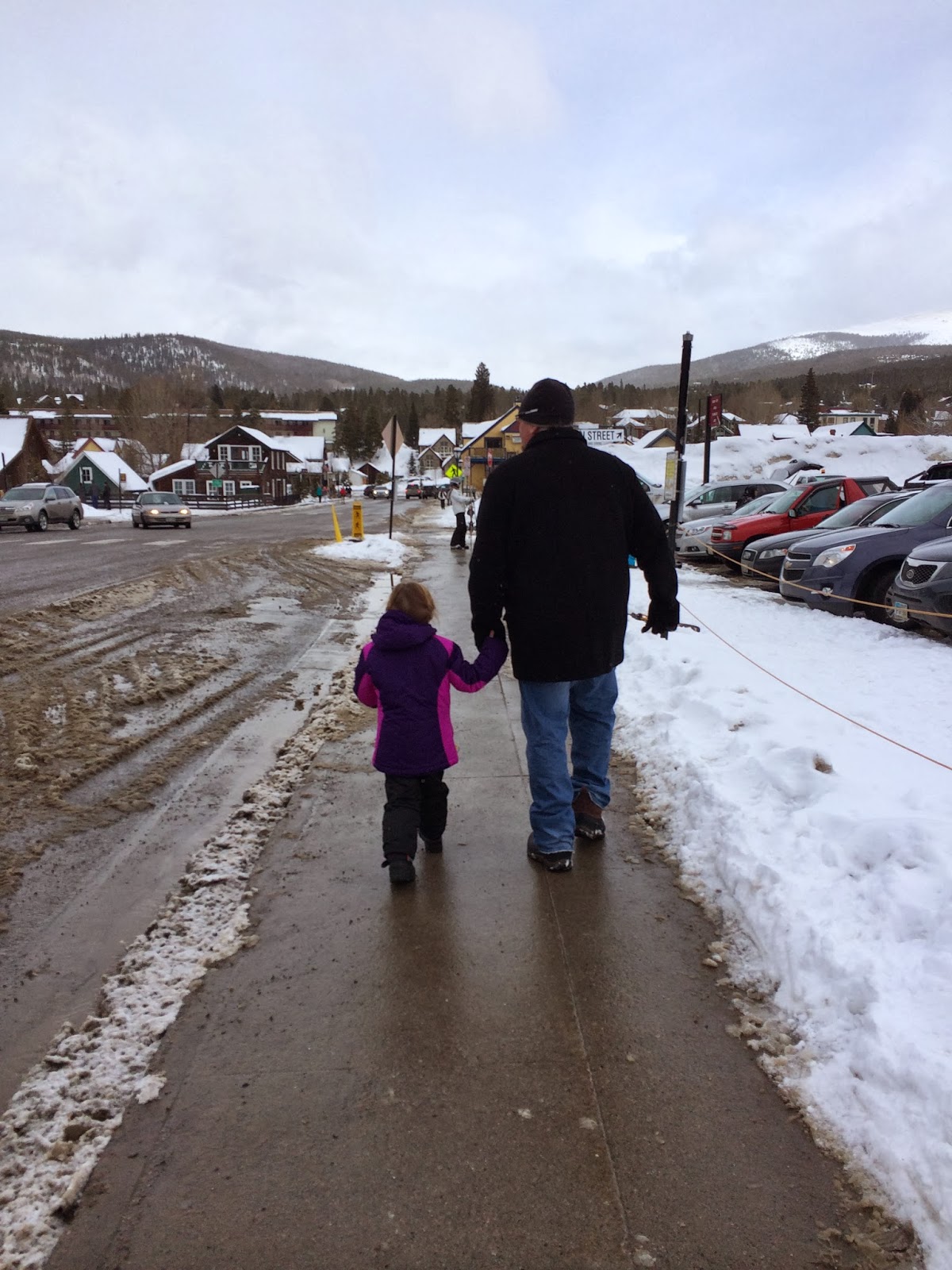 And since he is so enamored with the entire Colorado lure anyway, and thinks we could live here, I guess it's a good thing he got them started early! 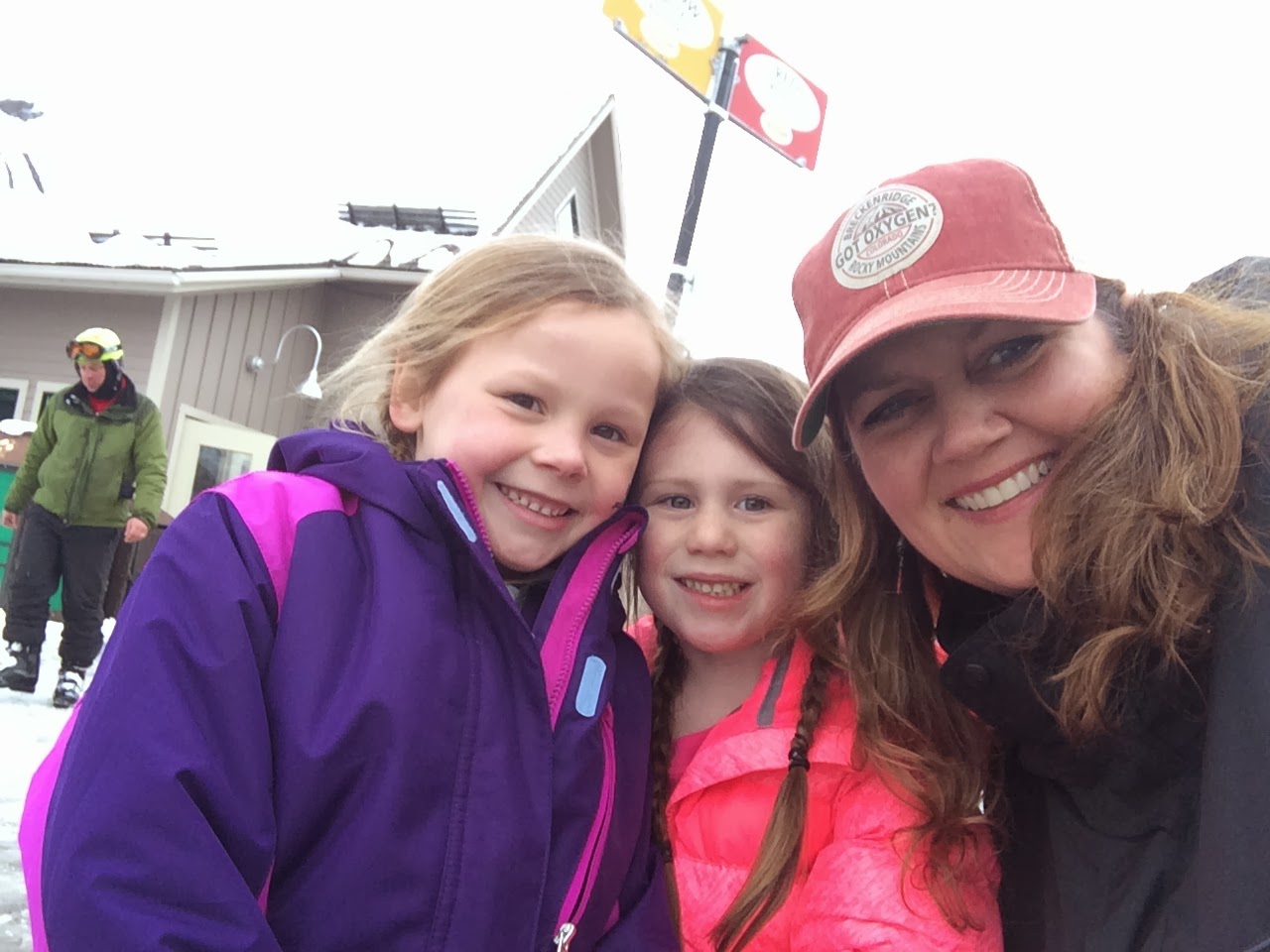 He even had Ellie convinced that Breckenridge is THE place to live.  As for Gabbi and I, umm... well... we kinda like our roots. 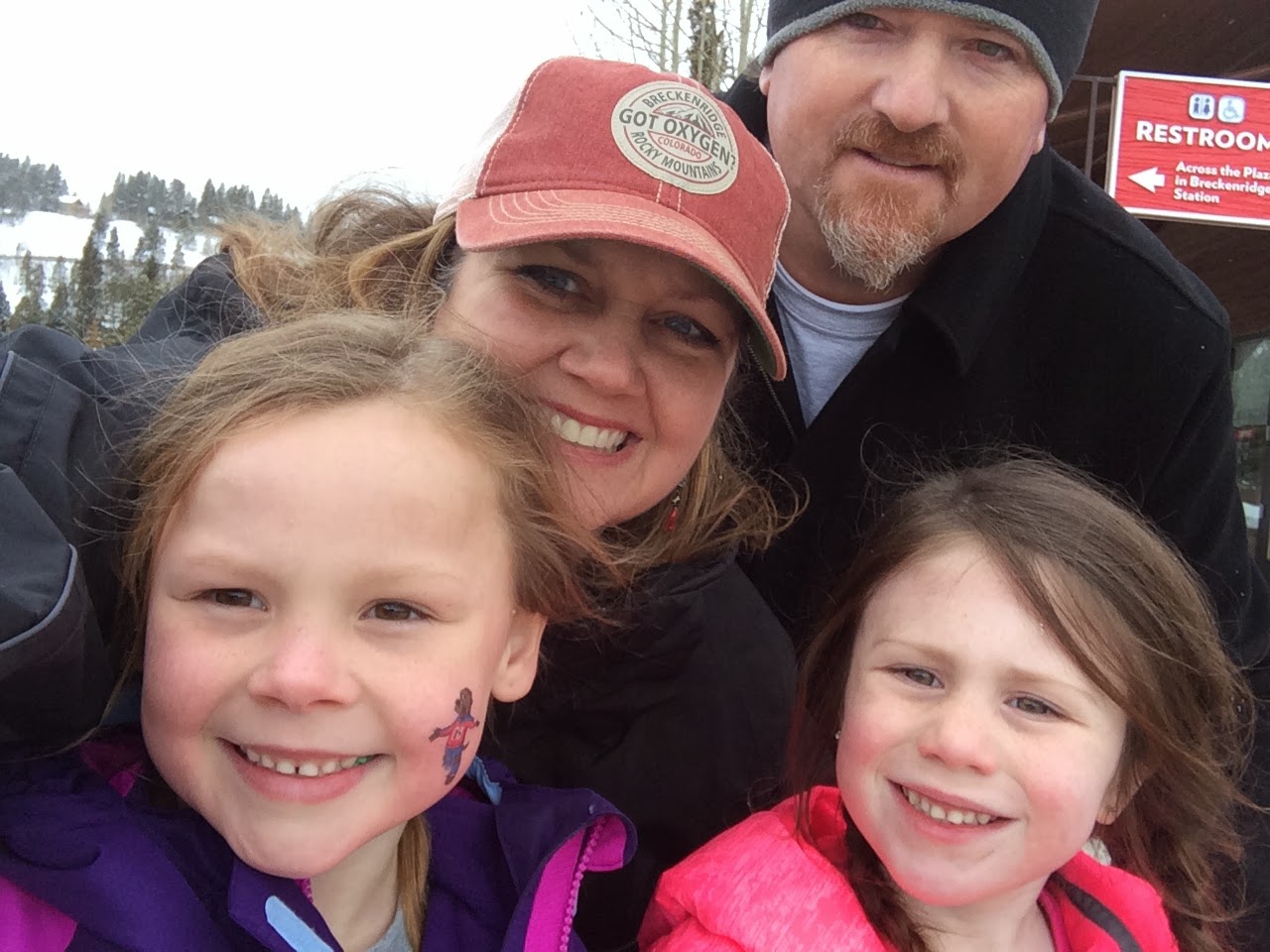 There's always travel!  And I, for one, intend to EXPLORE a lot this year!

Next year Ellie will be 7. She will be in the big kid lessons! We will be going to Beaver Run for lessons too. This is the first year I am planning to let my 10 year old on the mountain without taking a lesson. He is very cautious, so I think we will be good. I think you convinced me I need to put my first grader in for 2 days. She was just like Ellie flying down the mountain last year after lessons. My 3 year old is sitting in my lap saying "I am not going to ski school." I will be the mamma saying give it another try. She might cry through it, but she will get out there and do it.

I laugh about the ski lessons. My first time skiing was in WA state and it was amazing! I took ski instruction on the mountain with my nephew who was 7. (really he was 6 but we lied so he could get in) I was 24. Needless to say I was the OLDEST "kid" in ski instruction and it was a little embarrassing. However, once I learned to make a pizza slice, I was skiing like a pro. I was terrified of the lifts (heights) so, I never made it off the blues. However, there were like 7 different runs from one lift so I never go bored. My sister who had been skiing for 5 years was mad at how easily I picked it up. Great memories! I really need to get out to CO and take my 11 year old son. He would love it! Great job Ellie and Gabs. It was the little kids that would come screaming by me without ski poles and I'd be like, dude! :)

Go girls! Looks like everyone had a blast and I'm certain this will be an annual trip for the Groves!

I second that Colorado is the place to be!! So much to do all the time.

Hi Mo ~ I like Todd's idea that you move here - or maybe just open another PT school out here - heck with all the ski accidents it's a sure win!!! Something to think about........
Have a safe drive,
Diana from Colorado

I think it's wonderful that you are taking the girls on so many wonderful adventures! They'll be pros the next time you go on a ski trip!