Girl trip. It's how we roll. 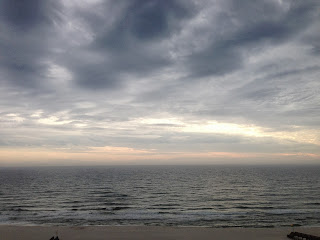 More about the girl trip.... first off, my baby girl, Mary Allison, came up with this grand idea.  I know that she just slammed a homerun during her first semester at LSU.  I have NO DOUBT whatsoever that that girl will be successful.  She has drive.  She carries no "pity party" along with her, although many would think she has every right to.  She does what has to be done to rise above the situation.  And she basically has to "fight" every fight for herself.  I was so proud of her when she told me she was a half point away from an A and went to her professor, to talk to him about what could be done for that 1/2 point. He told her he knew that she knew how to work the one she missed, so right then and there he gave her an opportunity to redo it.  She aced it.  And voila... an A!
Not all college freshmen would have the gumption to go for it!  MA does! 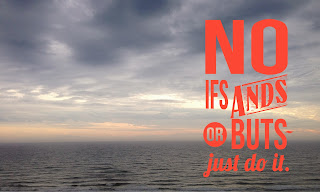 And so the least I could do was to hit the road with her when she asked me to.  My baby girl NEEDED this road trip!  When all the other girls are being moved into and out of the dorm with their mama, MA was doing it alone.  She packed up her whole dorm all by herself.  But,.... we were there to celebrate with her as soon as it was done!

Ya know, I knew I needed to rest.  After all, as depicted in the photo below, my guts were pretty much ripped out, causing my eyeballs to bleed. 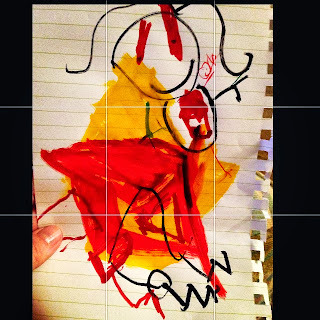 Nice depiction of "mama and her surgery" by Gabbi!  ANd so, I figured a trip to the beach would keep me away from a)work and b) friends and neighbors and such, thus I'd have not much to do and would genuinely rest.  Also the condo is WAAAAYYY smaller than the BAH, so walking to the bathroom or kitchen from the bed was not the trek it is at the house.

But, by Saturday, we were in need of some goods.... and so we took our first outing.... to WalMart.  MA reminded me that they had the carts! 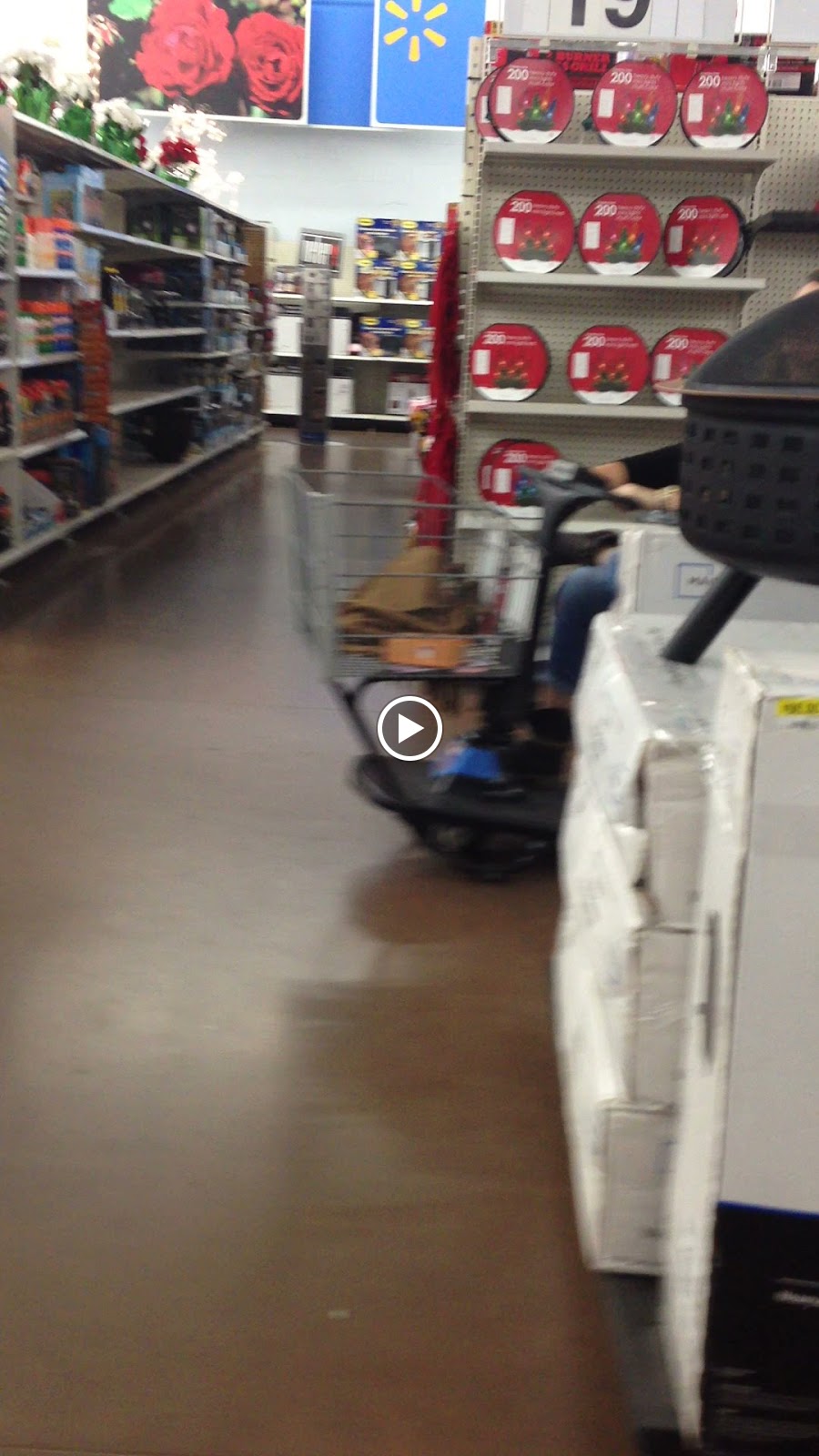 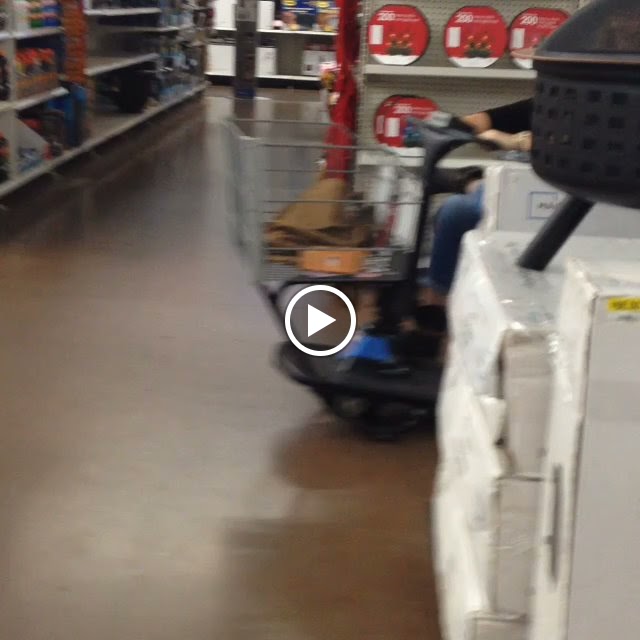 Later that night, my two sweet babies were totally entertained by Mary Allison and Alex, as they did hair and nails.  It was the epitome of a girls' trip!! 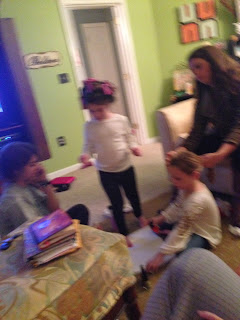 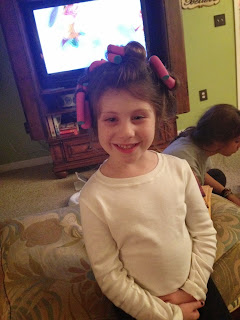 Gabbi was so pleased with her hair rolled.  And Ellie was the manicurist! 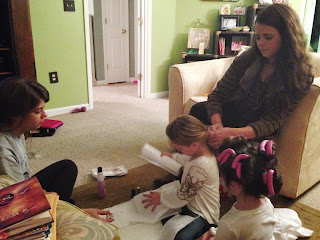 Gabs was all about the hair!! 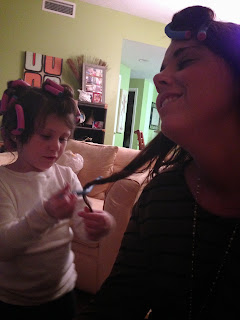 Strangely, she seemed to mature so much on this trip.  It's fun watching her try new things and genuinely not be such a "baby".  She was so proud when she brushed her own hair and announced, "I'm gonna take a bath by myself when we get home!".  Well, Goooo Gabs! 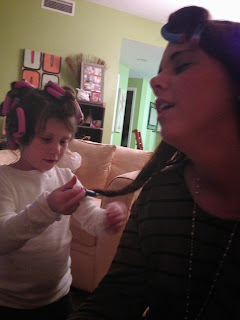 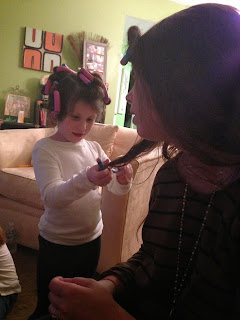 Ellie has seen the people at the nail salon soak the nails off by wrapping them in foil.  We didn't have that, so she improvised.  We were laughing our heads off at that one. 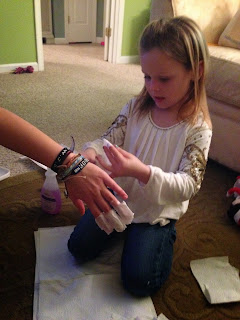 Alex was such a trooper. 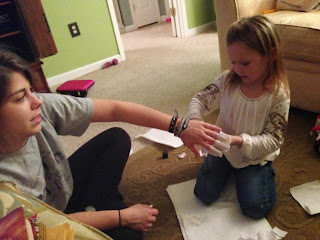 As was MA.  Gabs was doing a mediocre job, at best, of rolling those curlers up in her hair. 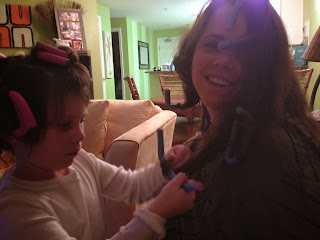 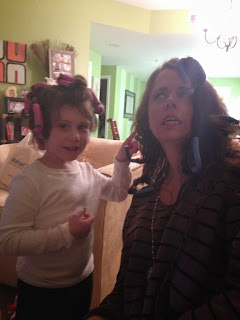 ANd then we all settled down and watched Elf!  And then we watched it another 3-4 times before we came home!  It is just such a classic!  SO much fun to watch on a girls' trip, and a Christmas girls' trip at that. 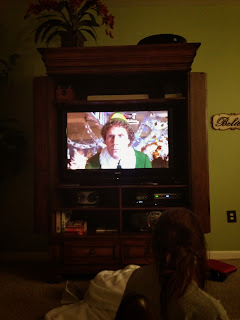 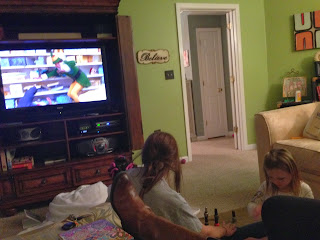 I'm so glad I took the opportunity to go when it arose.  I basically had a couple of days of preparation to actually make the trip.  My office had to totally regroup and cover my patients and many were rescheduled.  But I really needed to rest and recover, and well, my MA needed me!  And for that, nothing could've stopped me!  I am hers! 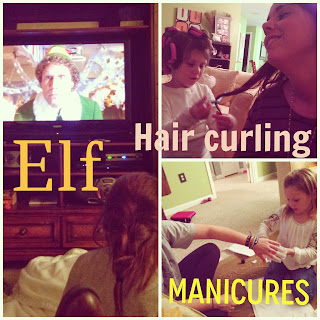 Memories were made.  My girls missed a couple of days of school, but what they'll remember from this trip will far outweigh the things they would've learned in the two days of school we missed. And so... we're back and ready for the holidays!!  Mary will be home for 5 weeks!  Hunter is out of college for about the same!  The girls have Christmas parties this week at school, and then 2 weeks of freedom for  them!!  Todd has new recipes to try!  It'll be our first Christmas with Todd's parents, since they are now in town.  We have so much to be thankful for!!

Awesome! So glad you're there MA.

I believe God puts His angels all around us and sometimes those little angels need us perhaps at times we hadn't really 'planned' on. In the end, they are the ones who God uses to get us to a place we need to be. I'm pretty sure that's what happened here. Sweet trip!

MA is such an inspiration for all of us! Glad you all had a chance to have some fun!

Loved G's sweet little curls from yesterdays post.
The relationship you have with MA will be treasured by her throughout her life. I had one similar when I was younger and I adore her. God has done a wondrous work through you for her.

What a great way to spend a few days before Christmas craziness! You and MA are blessed to have each other! And -- as I mentioned in my FB post, it has been so much fun watching Gabbi really come into her "own" over the last few months. She and Ellie are both true treasures and I thank you so much for sharing them with all of us.

Hi Mo ~
How wonderful that you made this trip happen for MA and your girls. Your right, the memories FAR outweigh two days of school. Gabbi is too precious with her curlers on and Ellie the nail tech - hysterical! I love it.
There is so much love between all of you - and I am so glad that you share it with all of us.
Enjoy your Christmas with Todd's parents.
Have a great day,
Diana from Colorado