Only kids at Open House! 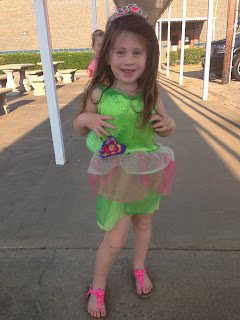 Sometimes I just don't have the energy to fight it. Gabbi was determined to wear her size 3 Tinkerbell costume.  We had to be at Open House in the next 10 minutes, so I said, "Jump in". 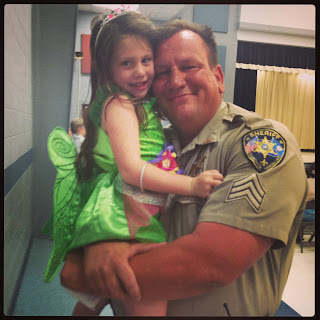 As we were walking up, I noticed that I was the ONLY mama there with kids alongside her.  So, after all I went through to get them ready to rock and roll and in the car, they weren't even supposed to BE there!

Luckily, Gabbi's FAVORITE guy, Mr. Todd, who is an actual sheriff,( but we just call him our crosswalk guard) was there, and she snuggled right up in his arms as soon as she saw him.  I called Daddy, and he came to the school to get the girlies, so I could be like all the other grown ups who DO read the instructions sent home in the backpack.

I was in trouble though, cause this particular night was Open House for kindergarteners and first graders!  And, well, I had one of each!  So, I had to pick and choose which parts of which lecture I'd attend for each.

Once in Gabbi's class, I noticed the art on the wall.  Each kid had to write a little something about his/ her favorite toy, apparently. 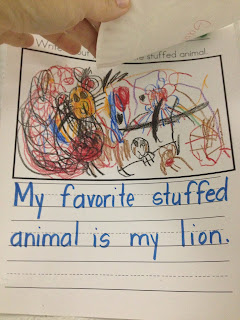 Hmmm... I'm gonna have to go and look for that "lion"?!  I don't recall EVER seeing a stuffed lion at our house.  But, my little Gabs DOES have quite the imagination!! 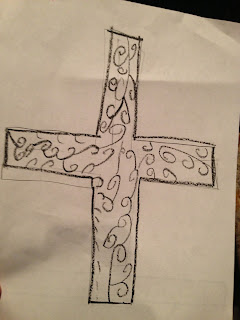 Once in Ellie's classroom, I sat in her desk, and found this inside her desk, with this drawing on the back of one of her test papers.  She's been watching her mama, it seems, with all the swirlies.  I left her a note inside her desk too.  Isn't it wild when your kids learn to READ?!   (Gabbi has her first oral reading test this week!!  I think she is READY!)

Aww! Your girls are lucky to have an "artsy" mama. I can't believe they can read and write. My how fast time flies.