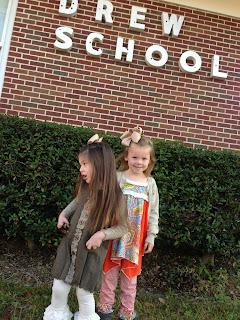 Ok, so as you know, particularly if we are Facebook friends, I take a pic of my girls every morning before school. 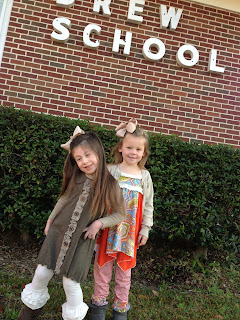 And this morning was only different in that I took the pic in front of the school instead of on our driveway. 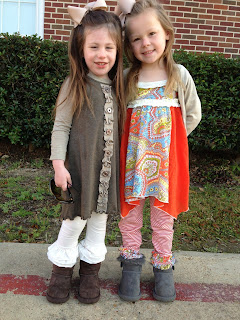 I'm not sure what was going on at school, but must've been something, because I actually parked the car and walked my little darlings in the school. 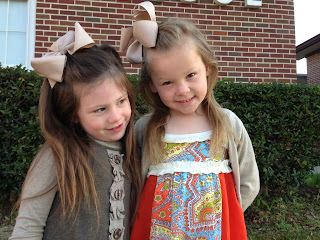 Something seriously awesome has occured at the Groves house... my girls are basically wearing the same size.  DO YOU REALIZE WHAT THIS MEANS?!  It means much less buyer's remorse over kids' clothes, because now I can say, "Well, it's for BOTH of them!"  ha 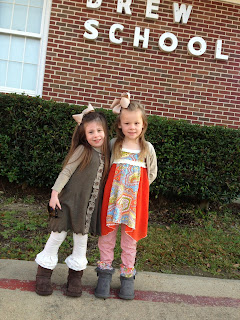 And I am assuming Ellie was struck by some sort of tranquilizer gun prior to school to get her to do this! 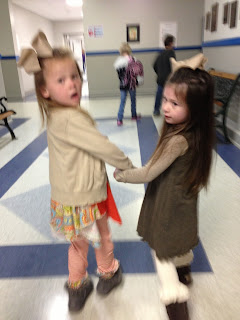 I mean, is this presh or what?! 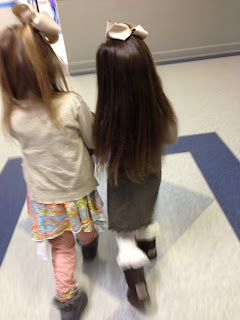 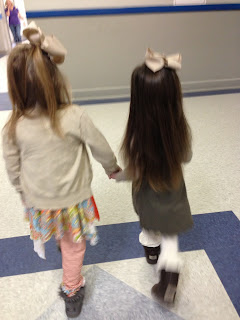 We just had a couple of inches cut off.  And she was telling Polly to cut it short.  Ellie has been saying she wants hers short too.  She goes to school with Priscilla Robertson (or Duck Dynasty fame... Jep's youngest daughter), and she wants her hair cut like Priscilla's. 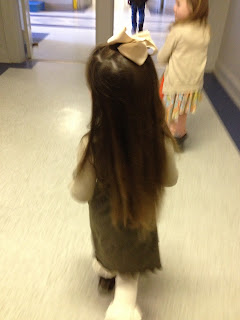 It's a short bob.  I said we'd revisit that request right after the recital.  We are for SHO not doing anything radical until we've made that big, beautiful bun for the dance recital in May. 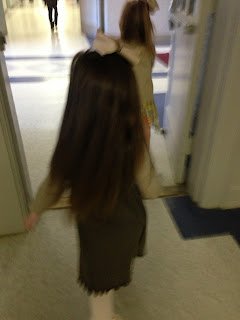 This is just about as sweet as it gets. 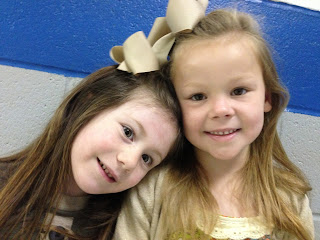 Gabbi has got to be the most affectionate kid I have ever met.  She loves to LOVE! 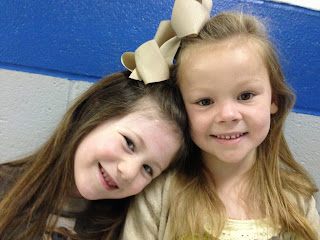 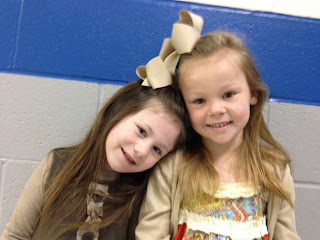 And eveeeery once in a while, Ellie loves back!  This was one of those perfect storm moments! 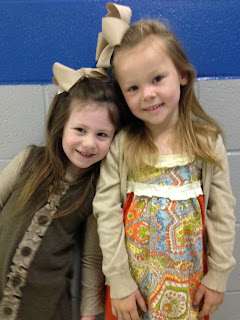 Gabs LOVES to go to school with Ellie.  She just feels so big walking those halls.  Now, to figure out if she is ready to walk them alone!  I think about that a lot.  But, I realize that when it all boils down, I have another 3 months to enjoy her and not make that decision, so I need to just let it go. 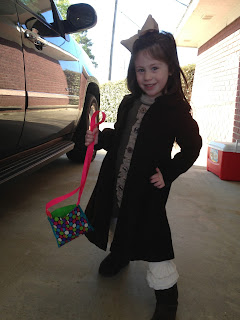 Gabs headed to the office with mama when we dropped her big sister off. 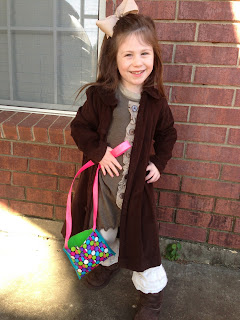 I'm gonna miss my baby being able to do that with me.  I like the freedom of not HAVING to be at school every day. 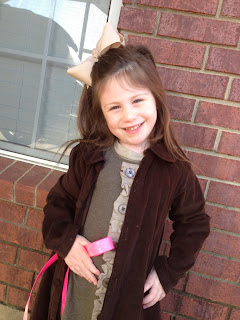 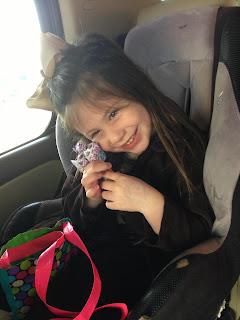 We are greeted by people there who love us! 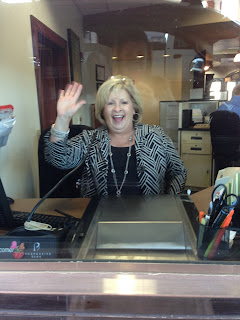 Miss Lisa hooked a sista UP on suckers! 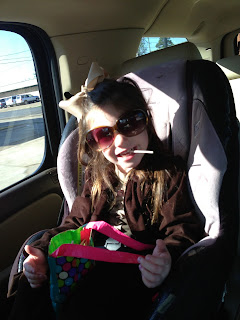 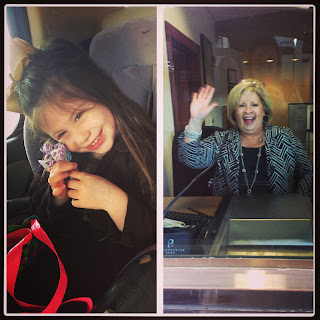 And eventually, we went back and picked up this nut! 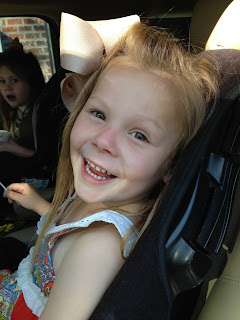 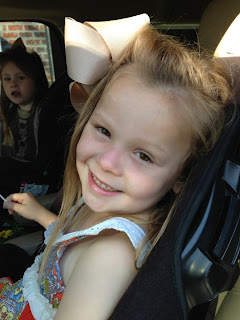 I've started taking off on Fridays, and I try to pick Ellie up a little early, and we all go do something fun!  Ellie LOVES this tradition.  She only has two more weeks of school, so I figure at this point, it's not that big of a deal to miss the last hour of the week each week. 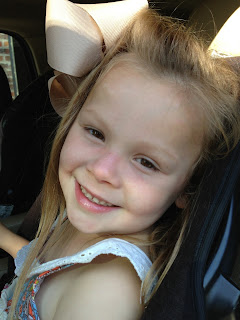 I've pretty much lined out the summer help.  KK now has a job as an engineer.  NOT COOL!  I told her, she has her whole life to be an engineer, but my babies will only be young once!  It's not working!  I think that whole "paycheck" thing has her priorities all messed up! 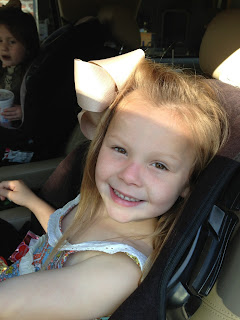 But we're excited that she is out of college and has a big girl job!  As for Mary Allison, she's headed straight to Baton Rouge as fast as she can get there to be a big ol' LSU tiger!  Today was her last official day of high school.  I know her mom would be so proud.

Well, that's what's up in our world... tomorrow is FRIDAY!!  Whoop Whoop!

Wow, all of your girls..KK and Mallison included..are growing in so many ways so quickly...that is why you should savor your time with them just as you are. Great that you can take time off with them to make those memories. Money can't buy that time for sure. You have precious babies and they clearly show how great life is for them. You made that happen for them and they are just as blessed as you for they have a great Mom and Dad. Enjoy your Friday girls...

The fifth picture this post would be a good one for the blog too.

I bet Ellie is loving the extra special time on Fridays.

Congrats to KK and Mary Allison!

Two thumbs up for the Friday girls' day!
Even though it's hard to let go, how wonderful to hear the exciting things ahead for KK & MA.
Enjoy those sweet baby girls today!

I can believe how quickly time flies!!! All your girls are growing up.....

So many precious photos! Great to spend every extra minute you can with them. Congrats to KK and MA!

I think those are some of the cutest pictures of your girls. Beautiful!

Your girls are so precious!! My gosh they have grown quickly. Trust me I know how fast it goes. I LOVE Duck Dynasty. We are in the far north and that show makes me want to move into your neck of the woods. I always think of you when we watch. References to Canton and seeing West Monroe signs. Was wondering if you knew them. I love how they end the show with prayers. What a beautiful community your girls get to grow up in.

Your girls are so precious!! My gosh they have grown quickly. Trust me I know how fast it goes. I LOVE Duck Dynasty. We are in the far north and that show makes me want to move into your neck of the woods. I always think of you when we watch. References to Canton and seeing West Monroe signs. Was wondering if you knew them. I love how they end the show with prayers. What a beautiful community your girls get to grow up in.

I googled "Priscilla Robertson" to try and see what she looks like, and your pictures were there! I love the girls outfits and sweet pictures--looks good in front of the brick school, too!

Oh just seeing Gabbi's hair makes me miss Bella's hair so much! Bella loves it but this mama misses that beautiful hair bad!!!! I tried to redirect the conversation whenever she would talk about cutting it but avoidance didn't last that long
:( Tell your baby girls to hang on to that hair as long as they can!

GG and Ellie Sue are so precious. I think all us mom's battle the decision of kindergarten with our second born. My boys are only 1 year apart and it was a big deal for me too. I'm sure MA will be a great LSU tiger. My oldest is headed to Hammond to be an SELU Lion.