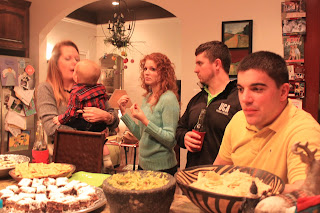 Happy 2013!  Let's all struggle for the next month or so forgetting to write '13 instead of '12.  You all KNOW it takes a while to get it right!  So to start out the new year, I thought I'd share a little party that was thrown for a few of us at MMPT. 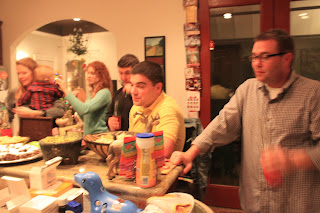 Mr. P is a little boy who has been doing PT for the past 7 months or so.  Here's the interesting thing... I have been talking to my staff about living INTENTIONALLY!  Our mantra for 2013 is "Decide to Grow Daily".  As in growing personally, professionally, and supporting each other in such growth. 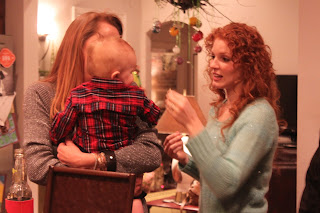 The red head, above, is Jessica.  She and I work closely together in the office.  She and I also went to a continuing education course together, back in July, in Houston, TX.  ON that trip, she was filling out my book, "A Question a Day" which I had gotten behind on while I was driving.  The question was, "Who would you like to get to know better?".  I said almost immediately, "Lissy Sanders Compton".  She looked at me a little weird and said, "Pearson's mom??".  I said, "Yep".  At that point, all she knew was that Lissy was one of our newer patient's mama.  But I'd heard of Lissy.  I knew she was an artist and that she seemed very interesting. 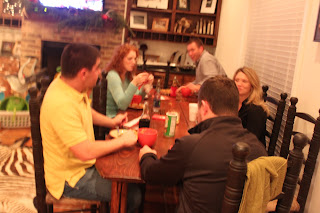 As it turns out, my intuition was right.  She and I became quite good pals.  She calls me her son's "godmama".  She and I refer to each other as "soul sistahs".  I have come to realize that we are actually very much alike! 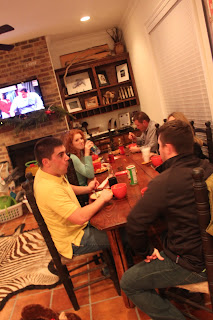 She loves to make her friends interesting gifts.  She is quite generous.  On this night over the Christmas holidays, she made gumbo and invited the therapists and office folk who are in Pearson's (aka Mr. P's) life.  She wanted us to feel her appreciation for taking care of her son. 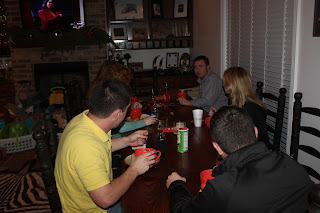 And here, she got even Keif to admit that she makes the single best gumbo any of us have ever eaten! 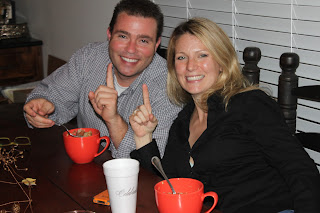 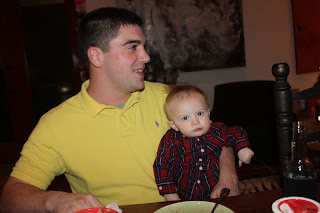 John Wesley was on the MTV show, Caged, where he was an MMA fighter!  I can't let him work with any of the babies right now.  And that's because he can't quit hugging on and loving on the babies.  And I mean to the point that I have to remind him, "yo, JW, they are PAYING us to make them work! NOT to love on them."  Ha. 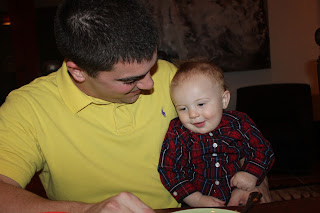 Check that out... Mr. P senses it and just wants to love on him even while we were at the dinner table! 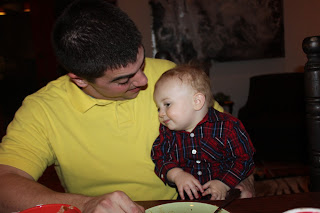 This is our pediatric crew. 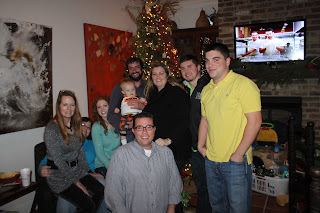 And there in the middle, beside me, is Mr. P and his daddy, Brent. 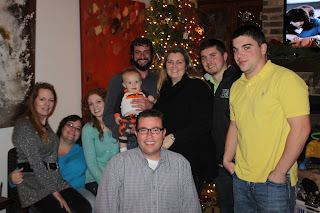 One of the takeaways from today's post is that INTENTIONING something makes it come to pass.  I just said, "I want to be Lissy's friend", and looky here.  She and I text multiple times a week.  We have met up and done a weekend market with our babies.  I can see us being friends for a long time, even after Mr. P is discharged from PT.  Making a decision and being intentional about your choice is a very strong thing!  So, what are you going to be intentional about in 2013?  I am struggling with my word right now.  I have a few ideas.  I wanted to take a week or so and really reflect  on 2012.  I have had virtually no time off during the holidays.  On the actualy holidays, like today and Christmas Eve and Christmas day, I have obviously had too much to do.  Otherwise, I was working!  I'm sort of frustrated with myself!  I've not reflected and I've not planned.  NOT COOL!  I'll get it together.  Do you have YOUR word though?  I am interested in knowing!  Maybe it'll help me with mine!

One place Lissy and I DO differ... at the late hour of 8:00 pm, she was yawning and could barely keep her eyes open.  I was laughing and snapped a pic of my watch, telling her, I WILL be posting this on my post about this party. I wanna keep my word!  haha 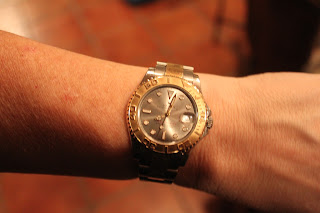 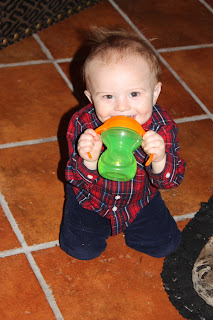 I am so happy that I get to help this little guy, and that his mom and I have become friends throughout his journey.  For sure, I have realized after 20 years in physical therapy that the relationships formed from lives coming together is more important than anything else!  It's what lasts and what matters!

Good morning! Great read to start off my morning. My word is EMBRACE: Meaning 'to clasp in the arms, hug, cherish, love, encircle, enclose; to take up especially readily or gladly; to avail oneself of; welcome; and to take in or include as a part, item, or element of a more inclusive whole. I gave my word a lot of thought and it seemed appropriate for me right now. Within a matter of about 5 weeks, we were confirmed of a job transition for my husband which meant a move after 10 years; I reached the good ole retirement age of 66 and because of the move, had to leave a job that I dearly loved with the AR Medical Board. We had a short time to sell our home, find a new home and my husband had to move before me to begin his job at the new location. I had to train someone on my job, oversee the move from AR, and you know the rest that comes with such an undertaking. So my word EMBRACE, means just that, I will EMBRACE reuniting with friends that are in this area, EMBRACE making new friends, (I may be 66 on the outside, inside I am still a young'un so don't send me to the Senior Center yet!!!)EMBRACE being retired after working ALL of my life (not an easy task I assure you) and EMBRACE new opportunities to do things and see things in a different light. We will see how this whole transition turns out...sweet EMBRACEABLE moi...LOL.

So sweet, y'all have such a caring and loving community.

I've used my word before, but I never lived it, I didn't put my heart into it, I didn't do it! My word is CHANGE, I need to change so much in my life, starting with negativity! Yesterday I started two books, The Diffence Maker (John Maxwell), I really really need to concentrate on my attitude and hoping this book will help. The other book is Change Your Brain Change Your Body, I am loving this book!!

Wishing you and your family a wonderful, healthy, happy year!

My word is Devoted.

I specifically want to focus on being devoted to: relationships, house/gardens, faith/God, personal growth.

I'd love to order a word canvas from you, if you're interested in creating another one for me!?

when i think of a word for you it is along the lines of slowing down or stopping to smell the roses. i know that you don't take advantage of any of the blessings in your life and don't want to slow down and you don't neglect any portion of your life - but you exhaust me and i know that we have no idea what you actually do every day all day long.

i think the most important thing you can focus on in your life in 2013 is your HEALTH. you need to deal with your heartburn/lapband. i would advise having the lapband removed. you need to make sure that your body can handle the grueling schedule that you demand from it. and most importantly you want to be around a very long time for all of those in your life that cherish you!!!!

I rarely comment, but I have to say John Wesley is CUTE!! Perhaps, this can be part of my intention to become more BOLD. ha!