Hallelujah! It's my Favorite things party. 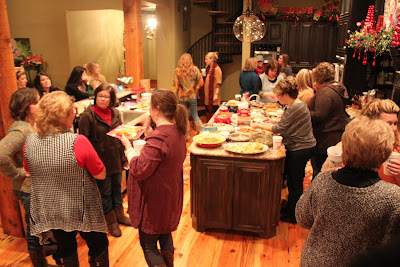 So, I think I MIGHT have Blogger working a little now.  It is still not 100%, but at least I can upload a few pics at a time.  Let me tell you about the first of THREE parties I had last week.  This was my "Favorite Things Party", and I personally think it was one of the funnest I have had in a while! 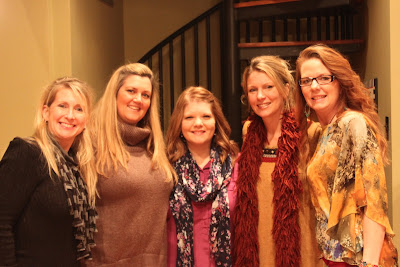 Everyone was asked to bring 5 of the same thing that cost under $6.  I'll admit, I would've rather it been $10 limit, but I understand that $50 might be steep for some.  Sooo, we stuck with the original plan.  I sort of cheated and did $8-9 each.  Anyway, back to the description. 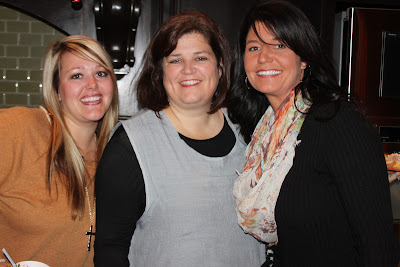 It sounds hard to find something that you "love" that inexpensively, but with a little thought, it must've become inspired, because everyone bought something TOTALLY different and really thoughtful.  In fact, the thing that Angie bought (Amazing Grace roll-on cologne) has become one of MY favorite things too!!  I LOVE IT!! 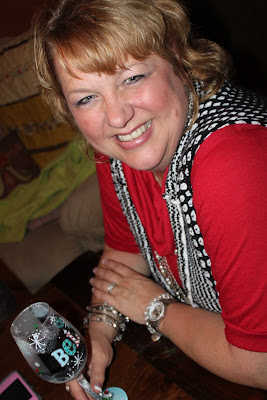 Ok, so as people arrived, we asked them to put their name on 5 slips of paper and place their names in a big bowl, 5 times. 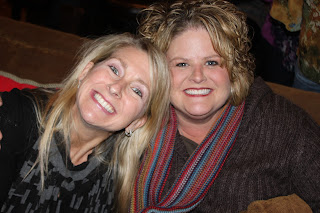 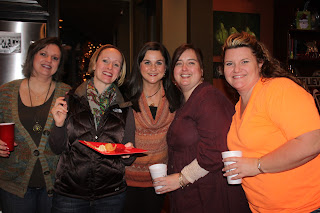 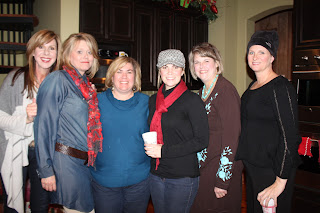 I gave boot socks.  I wore an outfit where I could show how the cut little lettuce edge sock can stick out of the top of the boot to show a hint of the cute design.

KK was called up in the next group.  Someone up next  brought Chik Fil A calendar/ coupon books. I mean, who doesnt' love Chik Fil A?! 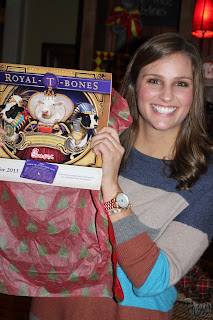 Here, Lisa is modeling my boot sock. She's so LUCKY!! 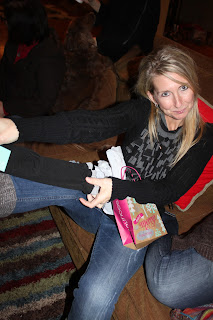 Apparently, my name was chosen, and I was fired up! 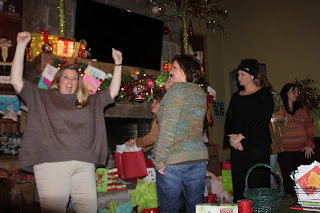 Yep.  And that was because I got one of Jacquelines' very cute handmade photo frames. 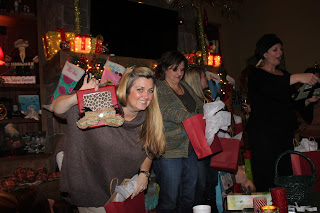 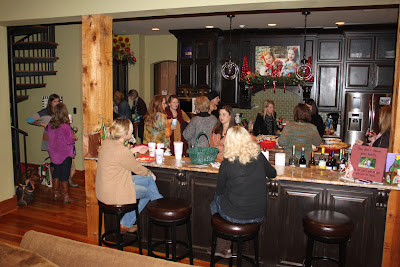 We made it a pot luck so folks just brought whatever.  I think we had about 40 people there, so imagine 200 names in the bowl.  That was really what made it so fun.  You had to wait to have your name drawn, so instead of going early in the night and checking out mentally/ emotionally because your turn is "over", you tended to constantly be on edge waiting to se if your name would be drawn this time or not. 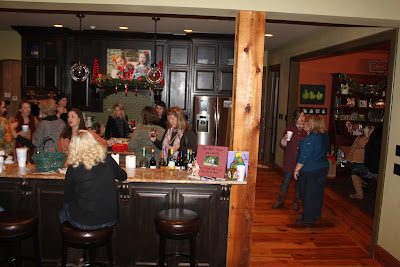 It really was one of my fave parties ever.  I didnt' want to rock the Blogger boat tonight and get greedy with my pics of this post, so expect much more on this party tomorrow.  And several others ones!!

Until then, shop til you drop.  ANd stay warm.  It's even pretty chilly in Louisiana!!

So glad to have you back!! Love the idea, definitely a party to have next year!

I'm hoping for a couple more blogs before then but, Merry Christmas to you and your family!!!

I love your favorite things party. It is such a cool idea and by the pictures you can tell how much everyone enjoys it. So glad you share all your creative ideas with us. Can't wait for the next post!

Sounds like a great idea. May have to try this next year. Read the 2nd part already and those are some awesome gifts. Will be adding some to my shopping list.