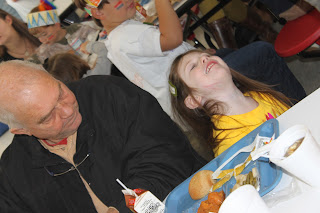 I'm well aware that I have already done a post on the "Thanksgiving feast", but apparently by some miracle of God on that day, I had my camera with me, so I also had a whole 'nother batch of pictures to sort through.  Thought I might as well share them. 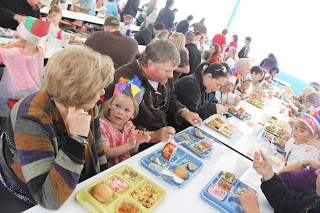 Ellie was sort of especially attached to her daddy that day. 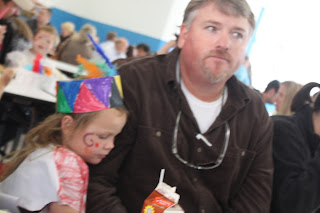 As someone in the first post mentioned, I am very lucky to have both of my parents available for this special day.  I just wish Todd's parents lived close enough to partake as well. 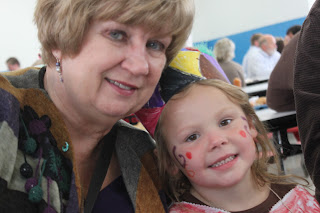 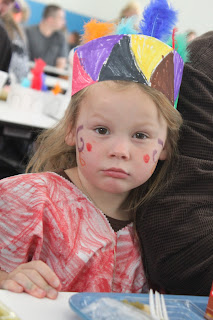 Gabbi Girl maight be having her turn next year.  Still not sure on that though.  I am growing more and more comfortable with the idea of having them two years apart. 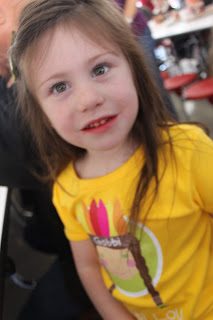 And I know I mentioned that Logan is one of her most favorites in her class.  These pictures sort of tell me why. 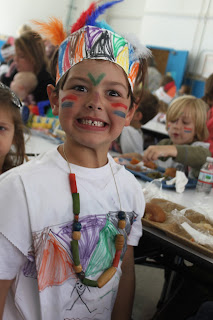 I think Logan has as much personality as Ellie Sue.  Both of them like to live with high energy and big spirits. 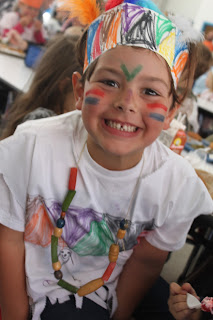 This is Anderson.  Ellie started out the year with him being her fave.  She has already decided (and talks about it often, so I'm not sure she's gonna just "forget about it") that she wanted her 6th birthday party to be at the beach.  Anderson, here, is on the very short list of those invited to her party.  She cracks me up.  NOPE.  Not spoiled.  Not one bit. 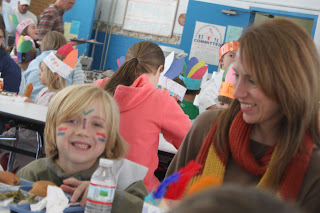 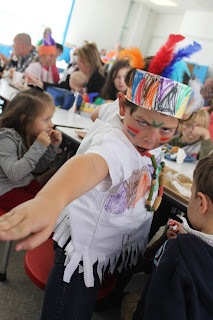 He pretty much makes me laugh too.  I am sad that he'll be moving out of state next summer. 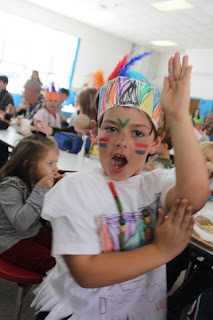 I like his mom too.  Logan is her only child, and she is typically fulfilling room mother roles and such, so I get to see her often. 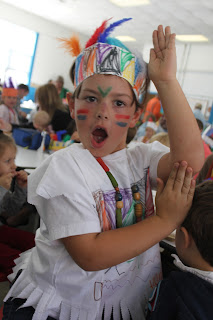 These two just crack themselves up! 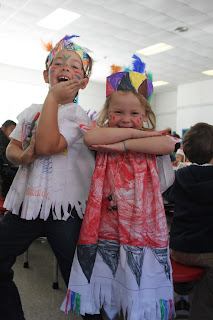 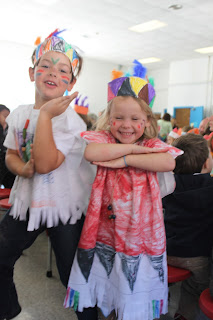 Oh wait... and now Avery is in on the action. 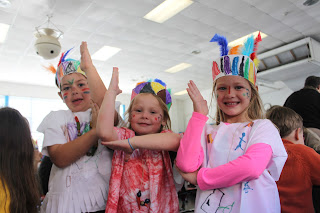 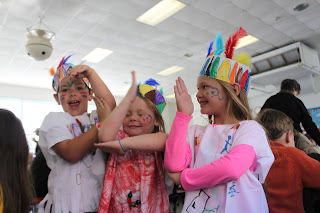 I absolutley love the next two pictures.  I LOVE the sheer JOY in Ellie Sue's face! 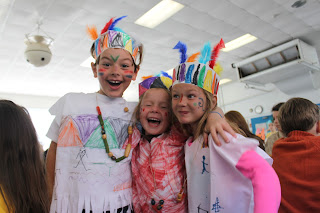 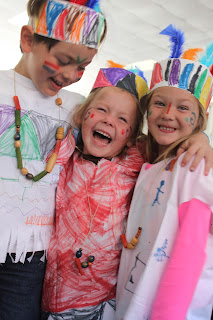 Despite her answer when you ask her, I think she is pretty much eating up being in kindergarten. 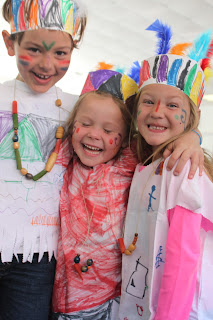 And making great friends to boot.  I look forward to Gabs making these sorts of connections. 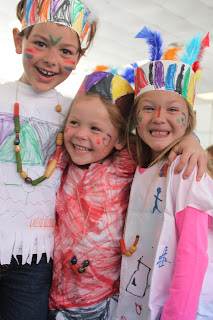 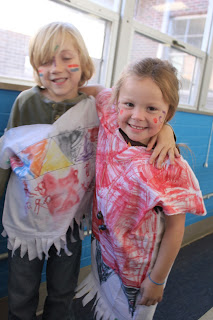 Sweet little Anderson.  He's that poor soul in the room who is allergic to just about everything, and has a fatal allergy to peanuts.  We have to be super careful with any treats we send to the school for the treat box. 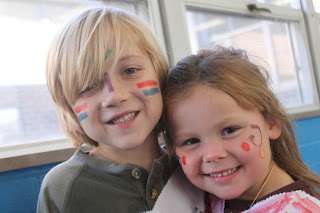 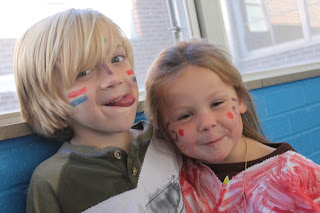 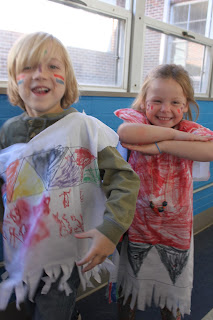 And Michael, in the very far chance that you read my blog, ZOOM IN next time you take a picture of a family. Especially if the mama is squatting and her behind is stuck out to timbucktoo.
THanks, though. 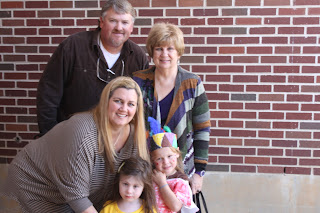 Hope to be at work tomorrow. Today, Gabs spent the day throwing up.  I mean TWO baths before noon.  Changed THREE full beds.  UGH.  And then, it started coming out of the other end.  Ellie is saying, "My stomach hurts", so time will tell!!  I DO NOT want to get sick.  Any lap banders out there had a "bug".  It was the single worst day of my life!!  It's a waiting game.  Nothing will come up, so you are nauseas ALL DAY LONG and hack and hack, but nothing!  HORRIBLE.  So, let's just pray ol mama does NOT get this bug!

Thanks for all of you who voted for my cards.  I appreciate the help.  Funny how FEW of them were the same amongst you!

Sure hope you don't get sick :(. Seems like the stomach bug hasn't left for about a month now, everyday on fb reading someone else has it.

Oh my Ellie is as full of life as Bre. I got tickled y'day after picking Bre up from afterschool care. I called out to her and this mother who was preoccupied on her cellph all of sudden told the caller on the other end "Girl!! Let me call you back!! She says "Wait WHO is BREJANAE" as she pointed to a group of girls where Bre was standing. Bre turns around w/a FULL ON SMILE and says RIGHT HERE M'am!! The lady turns to me and says OMG, my son T.J. talked about her BREJANAE THIS and BREJANAE THAT when they went to preschool last year. She then said "he was SMITTEN w/her and says Brejanae is his GIRLFRIEND ..screeeeeech(smile suddenly fades from my face). LOL!! Obviously he has just started going to the same place Bre's goes to afterschool care now. The mother goes on and on and by this time...I was like "okay...lady KEEP your son away from MY daughter". No sooner than that thought came to my mind, T.J rounds the corner and Bre says "Heyyyyyy T.J." T.J. had the hugest GRIN on his face like he had met a SUPERSTAR!! It was HILARIOUS!!!! Bre is my HUGGING CHILD and HUGS EVERYONE!! She hugged him and headed to the car! Poor T.J. was still standing there stoic w/the goofiest smile on his face. I don't know who laughed harder ME or HIS MOTHER!!! Bre was already buckled in, rifling thru her backpack to show me her latest creation at school for the day and ready for the ride home!! I hope she STAYS this non-chalant about boys!! HA!!!

I feel for the mom of the boy with the allergies.....My Daughter was also very allergic to Peanuts. It was a pain in the tush and every time the phone rang I would freak out thinking something had happened at school. We had the Epi Pin that we had to carry with us 24/7 and when we left the kids with a sitter I freaked out the entire time I was gone. Luckily we never had to use it since she is afraid of Needles. My Daughter is 11 now and has dropped to a level 2, Which basically means that she will get a rash and tummy ache if she consumes Peanuts, Such a scary thing to deal with. So sorry that Gabbi got the Flu, I will Pray that no one else gets it. <3