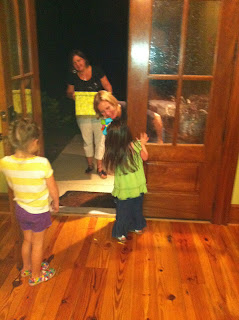 Guess how you know who your REAL friends are. 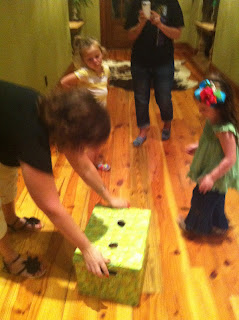 They bring your daughter a DOG for her birthday!  Yep that's right.  A DOG!!! 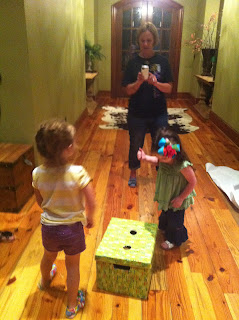 So, I get two separate texts from Katie and Linda Lou.  Katie is wondering if Todd would be mad if she brought gabbi Girl a miniature weenie dog.  As I am answering her text, "Yeah, probably", I get another text from Linda Lou regarding Todd's feelings about her bringing Gabbi Girl a standard poodle.  Now, I am thinking that they are just jacking with me, and text them both to ask.

As it was, neither knew the other was looking at getting a dog, and were both just vying for Gabs's deepest devotion.  So, after my asking Todd and his saying absolutely NOT, I text them such, and a few hours later, I get a knock at the front door.  This is what we got! 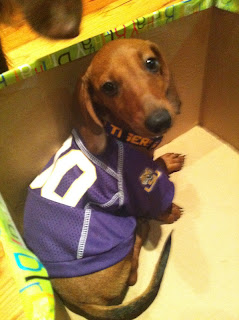 And with this reaction, what was I supposed to do?! 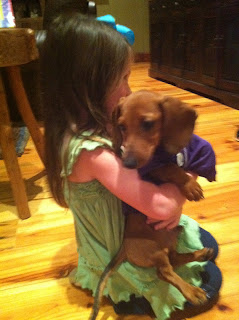 Linda Lou went all out and dressed the poor thing in an LSU jersey, an LSU collar, had an LSU leash, all the food, a crate carrier and a bag of food. 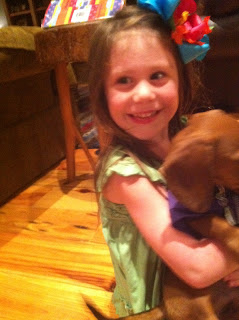 Gabbi L.O.V.E.S the Ford's weenie dogs next door!  I mean loves, as in obsessed!! 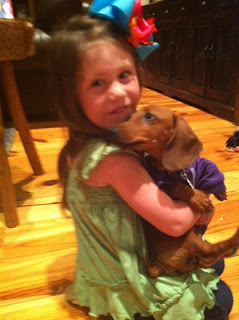 And Katie was well aware of this!!  There are not many things that Gabbi Girl just loves.  One is animals.  She loves SMALL dogs and cats.  She also loves rocks.  She loves tiny "treasure" boxes, and small coins/ tokens. 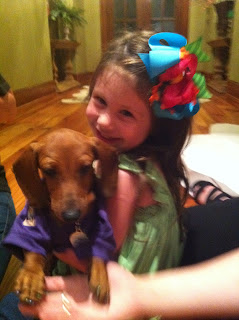 I think these two knew there could be no better gift than this.  And seeing as Gabbi calls her two best friends Kimie and Katie, I think Katie felt it was something that she MUST do. 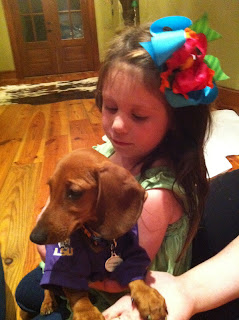 So we're all sitting here oohing and aaahing over this dog, when they say, "What do you want to name him, Gabbi?".  She looks at him for about 5 seconds and says, "I will call him Tarzan!". 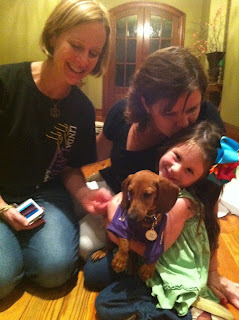 She goes through phases with her movies, and lately it's been all about Tarzan, so I suppose that is a fine enough name!!  I think it's funny that he's so tiny and has such a big ol name. 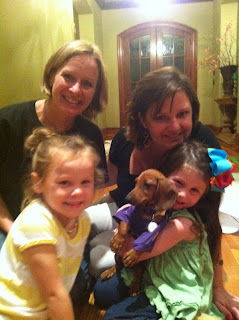 Todd texted Katie's husbans, Tom, to say, "How manly do you think I feel standing out in the front yard calling, "Taaar zaaaaan?".  I wouldn't just totally defy my husband!  He likes to play really tough, but I've already spied him all cozied up with this sweet thing on the couch, under a blanket. He seems really nervous.  Is that normal for this breed?!  However, as soon as we let him outside, he runs and bounds, and wags his tail.  So, I dunno!? 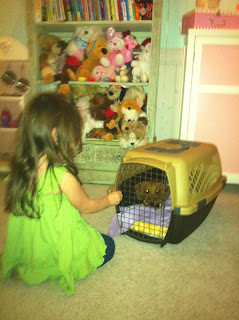 I do know one thing though, this will be a  very memorable birthday for Miss Gabbi Lou.  She has so many friends who love her.  And I am grateful that they treat her like their own.  Now, if only they'd take shifts treating this dog's potty training as if it was their own too!! 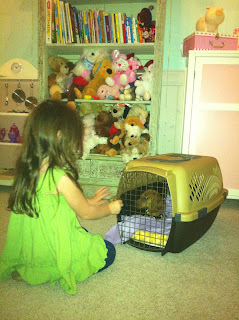 Oh, how cute! Hopefully Lizzie won't be too jealous!!

Awww....Definitely a memorable birthday for Gabbi!

Tarzan is precious! Weenie dogs are the BEST! Ive had 6 throughout my life. Currently I have a Maggie. They are very protective (think they have little man syndrome- LOL) But also very loving and will attach to Gabbi quickly! That will be the best bd present ever!!!

HAPPY BIRTHDAY GABBI!!! Hope you had a great day!

awe that is just to precious. this dog will be a constant conpanaion thoughout her school years. My daughter has a chihuahua that she has had since she was 8 and she is now 13 and the dog is 5. they are insepreable.

Weenie dogs are the best for kids when they grow up together! We have had 3 of them. They all have lived very long life's! We have one left and she is now 18! They are very good for cuddling under blankets! Happy Birthday Gabbi!

Tarzan is a perfect name!

My friend has a "Weenie Dog" and it is very protective and very sweet (well once it gets to know your scent-that is). She actually had (2) and while the first was "easy" to house train, the second was just "totally uncooperative". She said it was the hardest dog to ever train. GO FIGURE!! Well, TARZAN is just the cutest thing on four legs ever. My daughter wanted to buy Bre a GOLDFISH this past weekend and I screamed "NO WAY!!! After she graduates from the academy and take her schnauzer, "I DON'T WANT ANYMORE ANIMALS for a LONGGGGGG TIME". I may just change my mind if I had a cutie like Tarzan...NOT!!! LOL Happy Birthday GABBY GIRL!! You look OVER THE MOON HAPPY!!

PS How does LIZZIE GIRL feel about Tarzan?

Tarzan is cute. He and GG will be best of buds.

My sister has a mixed breed dachshund/miniature pincher and she is definitely a nervous dog. My sister lovingly refers to her as neurotic! :) But, she is a very loving, playful, and happy dog. She is also very secure when around their other bigger dog. Hopefully, Tarzan and Lizzie will bond and some of the nervousness will go away. Happy Birthday, Gabbi!

We have a miniature dachshund. She is wonderful, a true gift to our family! What a special gift for Gabbi!