Cheerio comes for a visit. 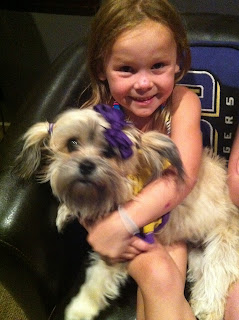 So, have you wondered?!  Wondered where ol' Cheerio was?!  Well, he went missing for a few days, and when we found him, he'd been at our next door neighbors' house.  And they were in love with him.  Just as we were. 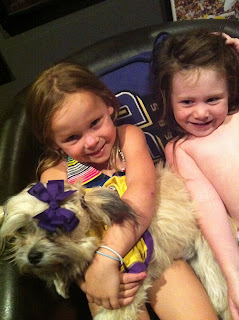 But I have to admit, Lizzie was REALLY glad to see him go.  (I am sitting here debating with Todd and Ellie whether Cheerio was a boy or girl.  I really think it was a boy.  And I really think that's why Lizzie and he/ she didnt' get along.) 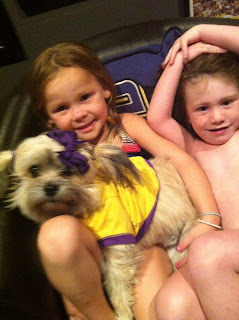 But anyway, the neighbors have since had her/him fixed and actually named him Sophie!  Because they knew it was hard for us to let him go, they actually officially registered him at the vet as Cheerio Sophie Smalling.  That was nice, huh?! 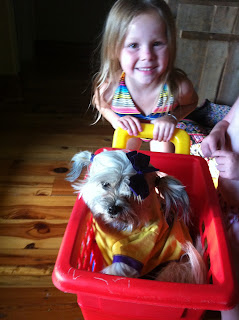 So, one would think that since they named him/her Sophie that it was a girl.  But, you gotta realize my friend, Shea, next door is as strange as I am, and if she liked the name Sophie, no sex would dictate to her what she'd be naming her dog! 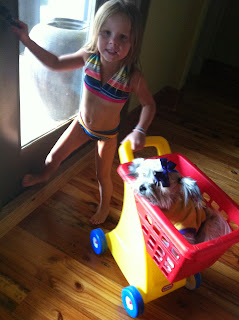 And if he/she IS a boy, poor poor thing!!  Cause when I came home from work, my two had him in this shopping cart, bow in hair and in an LSU tee shirt. 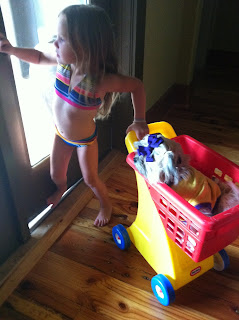 And when I told them that we HAD to return him/ her, they refused to take him/ her out of the cart, rather, just covered him up with a princess pillow. 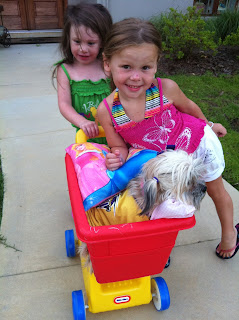 All the while, Cheerio Sophie was so patient and sweet. 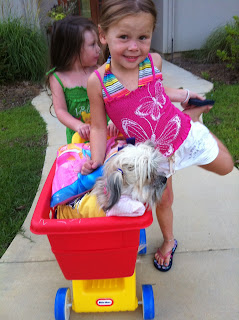 Gabbi was the one who REALLY took to that dog.  She loves any dog who will let her tote him around.  And BONUS if she'll stay in the buggy! 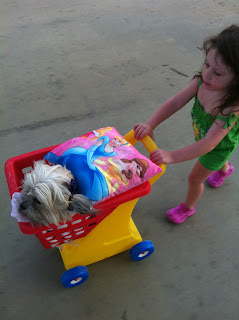 Yes, I am aware of the gender switching throughout this post. 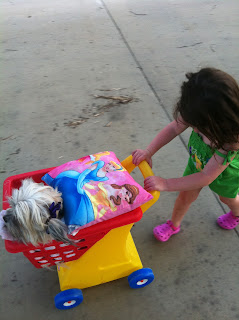 Anyway, so glad we had another day of reuniting with our old pal!  When we want to see him, we only have to walk next door.  It was a WIN-WIN! 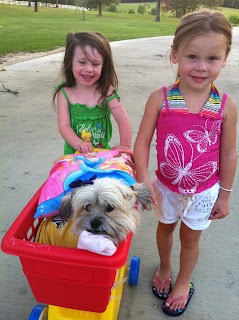 Cheerio is such a cute dog! I'm so glad he is living next door..or she ;) Sophie Cheerio is obviously loved by many. He/she looks just as calm as Lizzie, letting the kids do what they want!

Love the outfit and bow.

Cheerio Sophie is precious. And must be super sweet too.