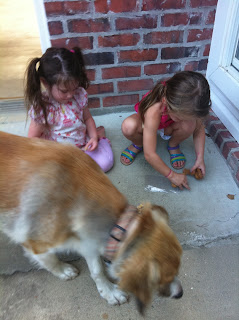 Linda Lou is notorious for feeding her dogs well.  I mean, as in REAAAAALY well!  Like, she'll go home to grill chicken for her dog.  Or make an extra steak for Cooper! 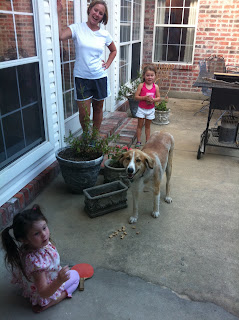 So, when I came home from work and Ellie said, "Mom, I am wearing a white halter top with pink shorts.  ANd I've laid out Gabbi a pink tank wiht white shorts so we can match.  Oh... and now you've got to go put on something FANCY!" , I wasn't all that surprised.

Me:  "Why, Ellie?"
Ellie:  "Because it is Cooper's birthday party, and Linda Lou is giving him a party. It's at PauPau's house." 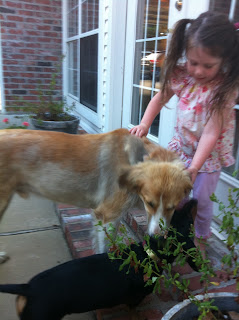 So I put on my "fancy" tee shirt and yoga pants and we piled in the golf cart to go partake in the festivities. 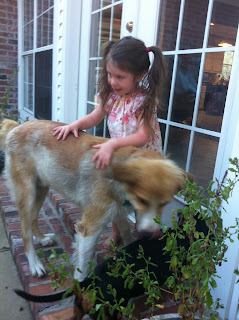 When we got to Paula's, she had no idea what we were talking about.  First she'd heard of Cooper's party!!  And she had a house full of teenagers, as John was in town, so Ellie, Gabbi and I went to Linda Lou's to see where the party was. 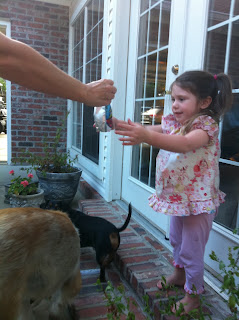 When we arrived, we found Cooper... out back and ready for the hamburger patties that Linda Lou was cooking up for the "party". 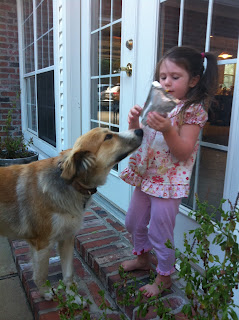 Linda  Lou couldn't believe we'd actually shown up, because she'd only told Ellie about this "Party" about 4 days earlier.   By this time, I didn't know if Ellie was making the whole thing up or not. 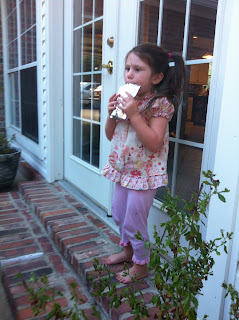 Ya know, this girl can dream up some craziness, so ya never really know. 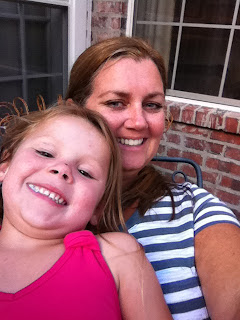 After Cooper opened his gift from us, another couple, the Toregrossas showed up, as they were actually already planning to come over to eat dinner with Linda Lou and Sam. 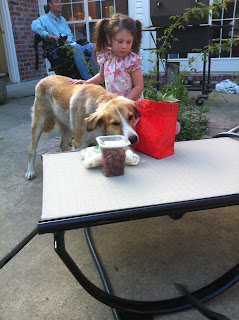 Within about an hour, Todd and Paula and Johnnye came over to see just exactly what all the hullabaloo was over Cooper's party.  And probably to see if we were even telling the truth. 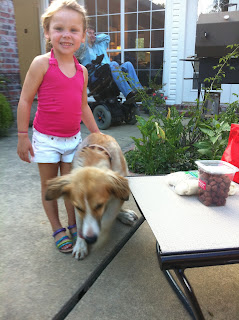 So Cooper's party was really shaping up to be just that... a PARTY! 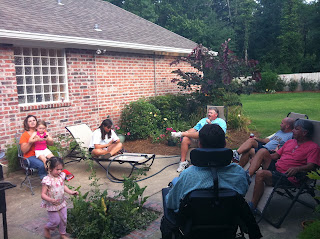 This is Sam being "pitiful" because he said, "Cooper has more people at his birthday party than I did at mine!" 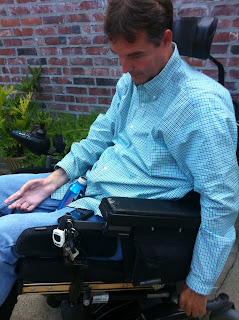 Before long all the college kids were there too, and lo and behold, we had ourselves a full on shindig!!  Literally, 25 or so people ended up sharing hamburgers and celebrating ol Coop's special day!! 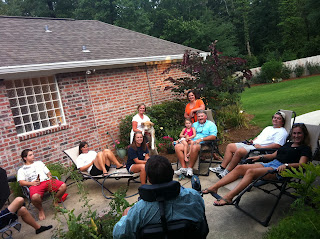 It's fun having crazy friends.
We're gonna have to give Lizzie a BIG, BIG party!!

Good job Ellie. You know how to make things happen. Too funny!

Yall are crazyyyyyyy and I just love it!!!!

Too funny... Kids don't forget anything do they? Ellie heard party and ran with it!

This is so sweet!! Micah got a steak for his birthday too!! I guess we will have to have a big ol blow out next year!! We all have some lucky four legged children !