Okay. I have them all loaded up and ready to share!! Sit back. This may take a while!! I had 643 pictures from our trip. Oh, don't worry. I have broken them down to about a week of posts, and today's is only about the travelling TO "Norlando". (Ellie cannot be corrected to Orlando... she knows EVERYthing!) 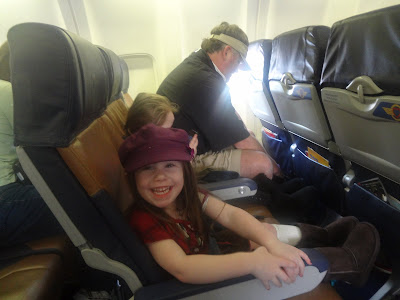 I love me some Southwest!! Todd and I drove two hours to Jackson, MS, just so we could get the straight shot flight to Orlando. And because it was Southwest, we got to choose our seats. We lucked up and got three togehter and mine right across the aisle from them. 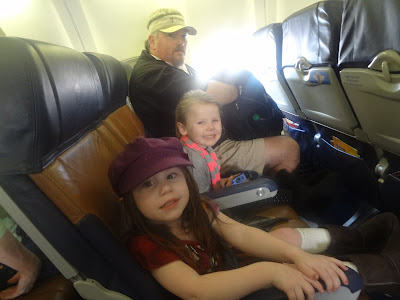 I think Gabs may just end up being my travelling buddy someday. She loved every minute of it!! 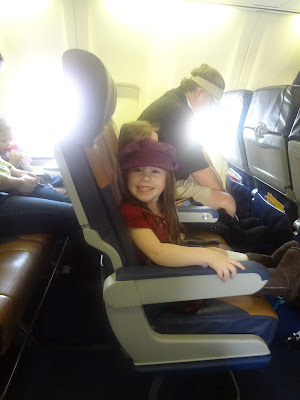 She would say, "We bout to take off, mama". And, "No more grass, mama. We are in the clouds." She hasn't flown since she was 6 months old, so I was surprised at how well she did and how much she understood of the whole process. 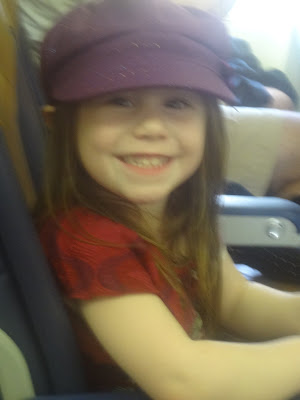 She was just an old pro at travelling. 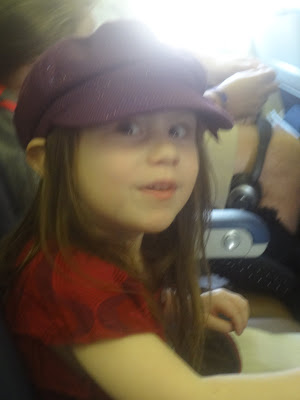 They both did pretty well. Linda Lou had just given them cool backpacks for Christmas, so they were both loaded down with "just in case" activities to keep them preoccupied. 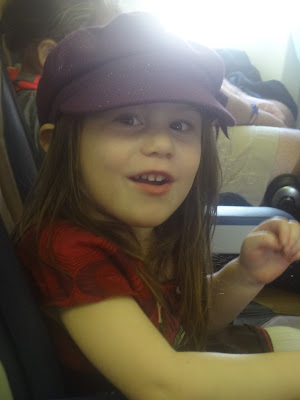 Neither one of them ever even tapped those activities, though, because they both had headphones and electronic devices!! 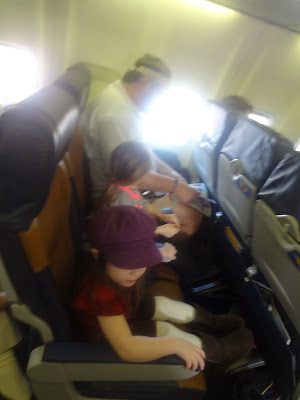 If you don't have a small child these days, let me just be the one to tell you... they were BORN INTO the electronic age, so they know straight up how to operate an ipad, iphone, get apps, download music, search itunes, watch cartoons, etc. Or at least Ellie does!! 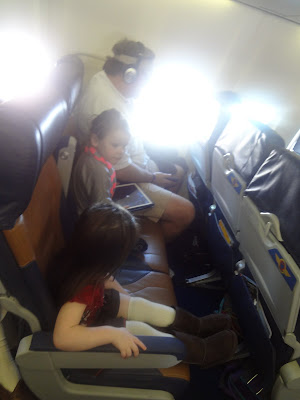 Robin loaded all the Max and Ruby cartoons onto my ipad, so Gabs had something to keep her preoccupied during the flight. 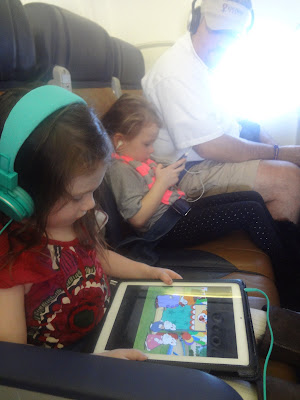 Ellie was either rocking it out to Justin Bieber, Adele, Rhianna, or Katie Perry. Those are her current favorites. It is HYSTERICAL watching her deal with all her musical selections!! 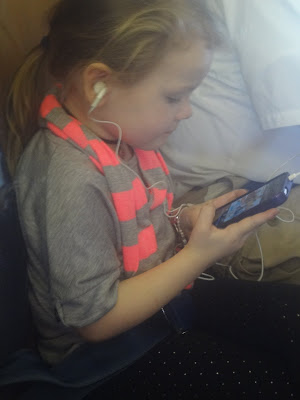 It was an awesome day for travel!! 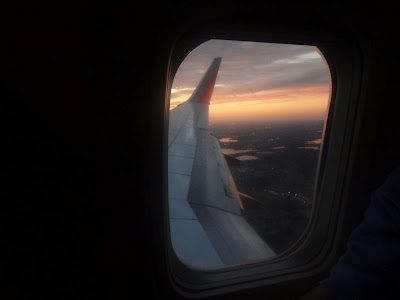 And once we arrived, I thought it was just the cutest thing having my teeny tots wait for their luggage at the carousel like they knew what was up!! 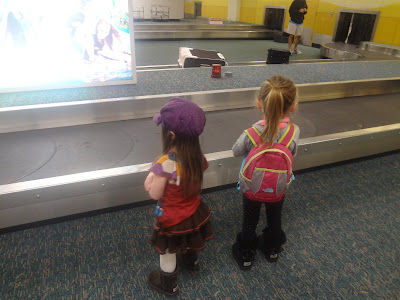 Ellie in her pink Northface backpack! 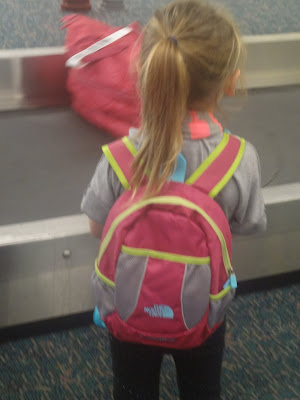 And Gabs sporting that cute purple hat and refusing to let us carry all the luggage. She pulled this one. 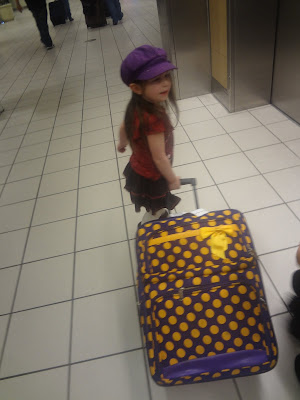 Even though it looked bigger than her, it was actually pretty light. It was full of princess dresses for them to wear to the parks or to entertain the grandparents with at night at home. 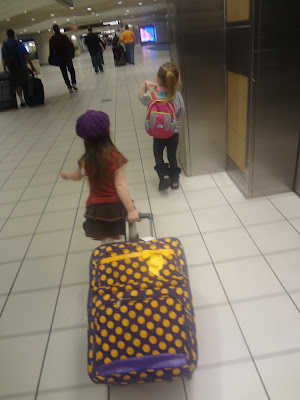 They were turning some heads as they strolled through that airport like they owned the place!! 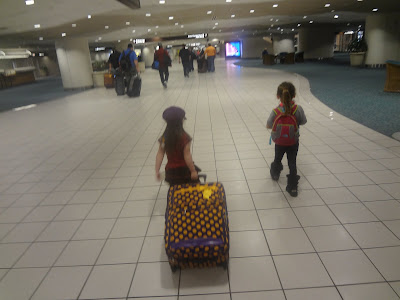 If you are my Facebook friend, you likely saw this photo. I thought it was so precious!! 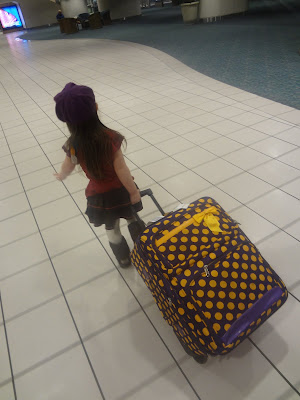 And so, we made it nice and early and problem free last Saturday. Flash forward a week, and buddy, I have a whole, whole bunch of memories to post on here. Stay tuned!! 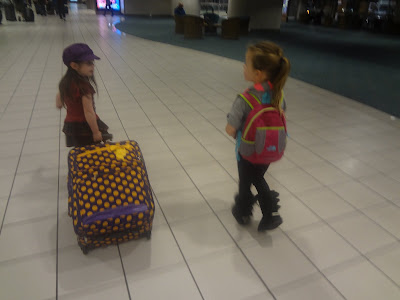 It was nothing if not an adventure!!

For me, it's not 'take me away Calgon' it is definitely 'take me away Mel'. I especially look forward to this week. Those girls could easily have their own TV series...I can see it..BAH reality TV. LOL Thanks for sharing! Brang it!

It is so funny that as I logged in to comment, I read "Mama J's" post and it was almost identical to what I was thinking!! How kewl is that?? Love the purple hat...your girls are adorable with a capital "A"....wish I could be a fly on the wall sometime.....huggers, BJ

Sista is sporting that hat. Too stinkin cute. Love me some Disney so I can't wait to see what fun you and your crew had.

I can't wait for the adventure! Thanks for sharing!

I can't wait for the adventure! Thanks for sharing!

Good Morning Mo ~ Just adorable, the cutiest little travelers! I know what you mean about Norlando -when my oldest was young, she would say "Mexicoat" instead of "Mexico" - and she would not stand to be corrected either - it was her way or the highway. We never corrected her either because it was so cute!!!!
Now I am thinking about "Aunt Patrick's Day" that is coming up - hysterical!!!
I am still hoping to get to see all of you if you come to Colorado this year - let me know.
Have a great week Mo.
Diana from Colorado

That Gabbi just exudes JOY! They are the sweetest little things. I'm sure experiencing the Magic Kingdom with them was just amazing. I was loving your FB updates. Can't wait to see the whole trip.
Hope you're feeling better this morning.

Love traveling along to "Norlando"!! I readily agree about the technology smart kids! They are TECH-PRO'S!!

Ellie's song choices/artist is longer than Bre's! Bre is all things Beyonce! NOBODY holds a candle to her in her book!! We have bought her the DVD of her on tour and she watches it ALL.THE.TIME. She is smitten with her!!

PS Love the cap on Gabbi!!!

So cute. My kids used to call it Norlando too - wonder why they do that? We love Disney - it's always such a magical time (and we love Southwest too!).

Amazing post! http://cottageme.com i am so thankful to you!