Pretty funny that we still refer to this party that I throw every Christmas as our "Bunco" group. I've probably mentioned this before, but we've NEVER actually played Bunco! EVER! Yet, we continue to call our group the Bunco group. Anyhoooo... we know one thing. We KNOW how to EAT!! 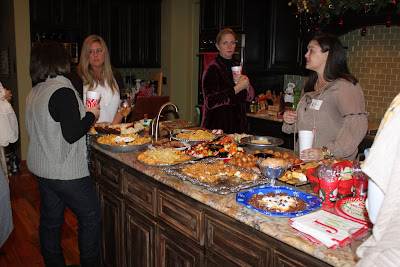 Because this group is not really an actual "group" at all, I decided to expand the borders this year and mix friends from all my social circles, and let the party really rage. You know how we 40 somethings can rage! And similarly, I had to ask everyone to wear nametags because not everyone knew everyone else. 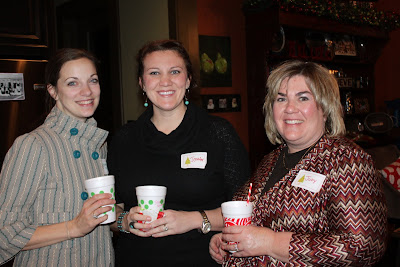 Above, we have Breanna, Jenn (who married my cousin, Drew), and Judy, (mom to Julianne, sitter at beach this year, and CoCo, Madi's babysitter, and best friend, to Mary Allison's mom, Pam). Was that description helpful!?

And then, we had Cindy ( a somewhat new friend), Paula, and Cindy. 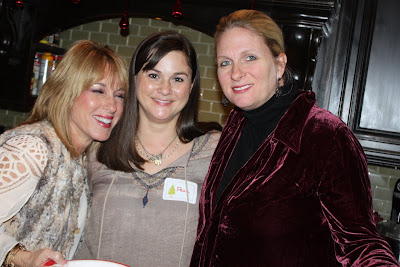 Heather (whose husband was Todd's roommate when we were both dating them in college), Tashia, Katie (Sarah, my art helper's mom), Lila (whose daughter, Katherine was a volunteer to get all the jewelry made for Shake 4 Jake this past summer), and Patti (a big coordinator of the Festival of Trees for Twin City Ballet Company). Got all that?! 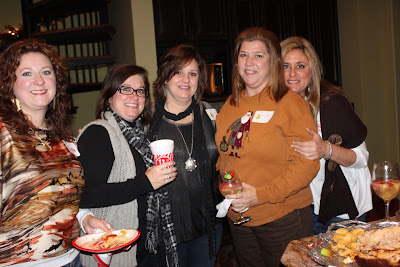 Ok, I am only going to TOUCH on this. I mentioned it on Facebook, but I will just simply repeat that message here.... there's a reason it's called Elf on the Shelf, and not Elf on the Lamp! Just sayin! More on that later! 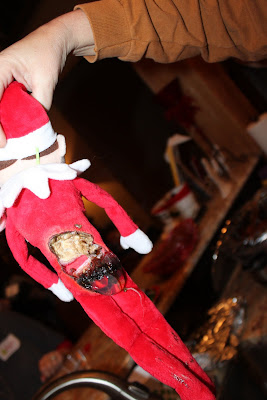 When this crew was all hanging out and there was smoke coming from the lamp, we knew there was a situation! 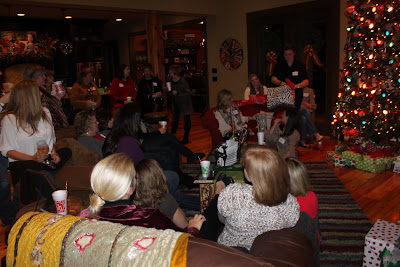 So, the way we do it, is that everyone brings a gift of $25 value, and we draw names, then let the dirty Santa stealing begin. I'm sure you've all played it , so I won't belabor that point. 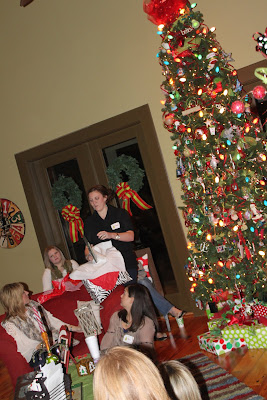 There's Shea, my big sis in KD in college. Also my very closest friend throughout my first two years of college when I was in Monroe at what is now Univ of Louisiana at Monroe. Before I headed south to LSU my junior year. 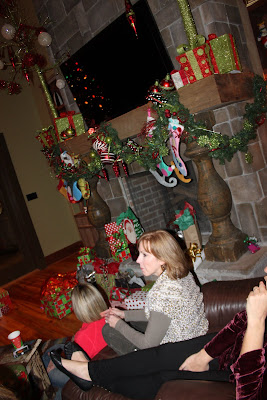 and here's Nicloe, my old next door neighbor, who decided to come on over, as she does EVERY year, in her pj's. I think you all know this is also Pam's sister (thus Mary Allison's only aunt on her mom's side). 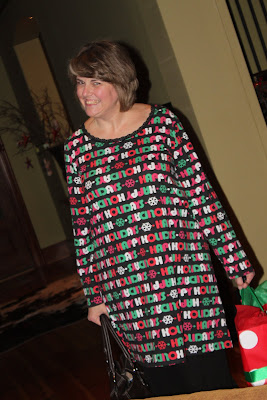 We drank wine, made appletinis, had some sort of wicked punch, and ate a TON. 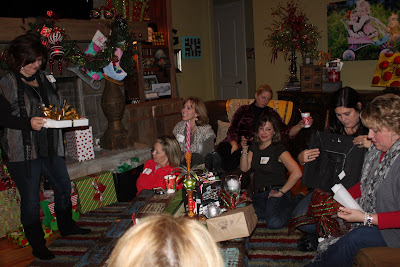 Hey. It's Jessi and Breanna, my creative kindred! 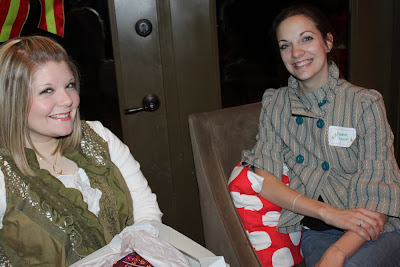 I think you know most of these peeps, so I'll move on. There's Jackie in the back right. She is who I go to Tucson every year with to the big bead and gem show. She is not going this year. Anybody wanna go with me?! Holla!! 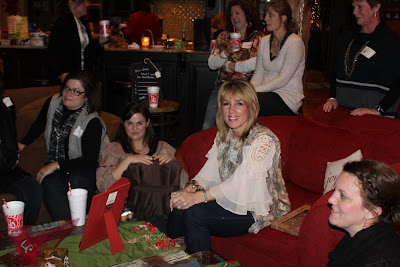 Tamy is Tashia's little sister. She recently had her 40th surprise birthday party, that maybe someday I'll have time to post. 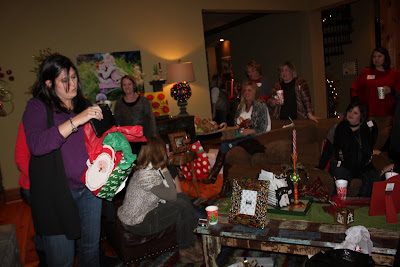 The thieving continued. All that "oh, your so sweet and such my friend, blah, blah, blah", is thrown out the el window!! 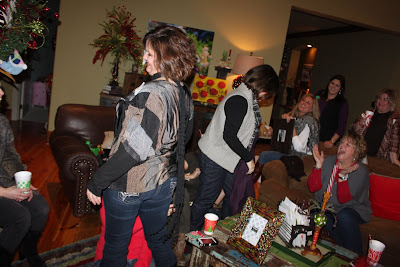 Look at everybody's mouths. Must have been something really good! 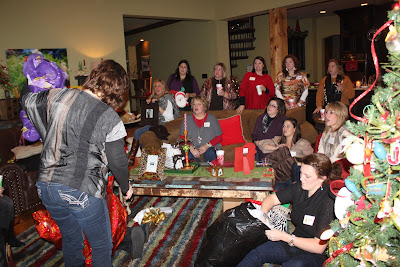 And then, we began the second part of the "program". 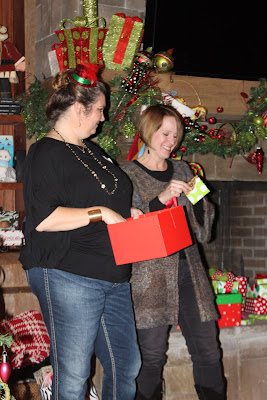 I had everyone put a secret about themselves that noone in the room would know and we all had to take shots at guessing who this so called secret represented. Whoever guessed it correctly first had first dibs on choosing a present. I MADE 40 gifts for this party!! 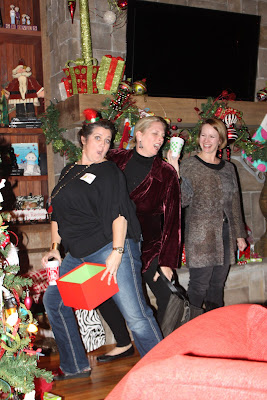 and let me tell you... some of these secrets were HYSTERICAL!! Especially when we found out whose secret it was. 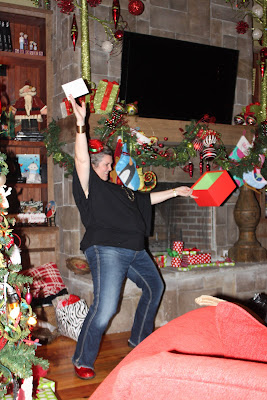 For instance, seems Patti's boyfriend in the 11th grade gave her a multiple wicked, 50 pound poodle candle for Christmas. Hmmm.... who knew?! 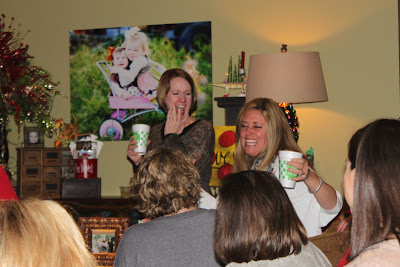 And yes, I have gained just about all my weight back. And NO I am not toned or buff. 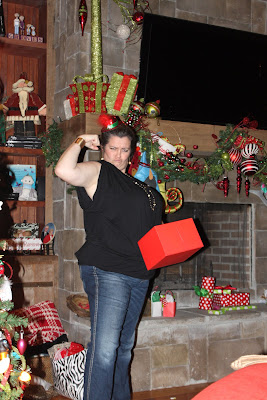 And the person who wrote that she and her junior high stunt partner on freshman cheer squad could still do their stunt happened to be Julie. 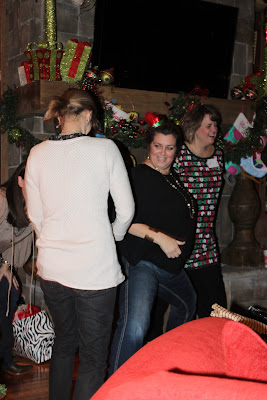 and Julie's stunt partner happened to be ME! 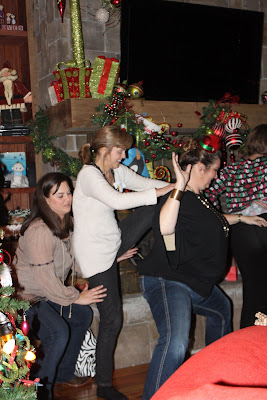 So, I felt compelled to PROVE it!! 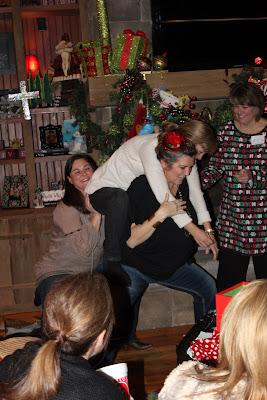 Now remember, stunts have become much more elaborate in the recent years. For instance, I think Paula may have "thrown" her badass roundoff at Cheerleading tryouts. I'm not bragging or anything, but I think I backwalkovered into a split! Just sayin'! Nowadays, you'd get laughed off the court for that! You'd BETTER be able to "throw" your backhandspring AND a tuck! Anybody out there with me?! Things have gotten CRAZY if you ask me!! What happened to a good reputation and school spirit?! Just sayin'! 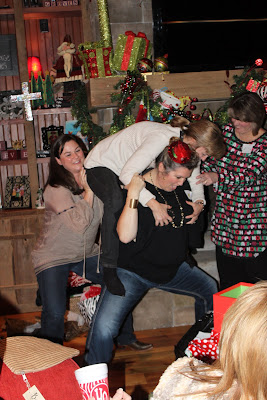 So, anyway, once Julie opened her big mouth on the "can still do the trick" thing, we HAD to show it. 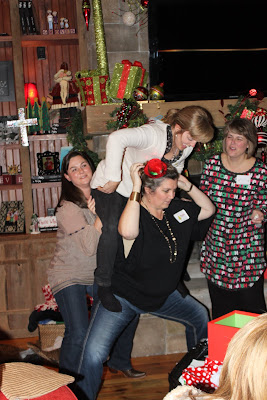 Are you ready?! Cause HERE IT IS!! 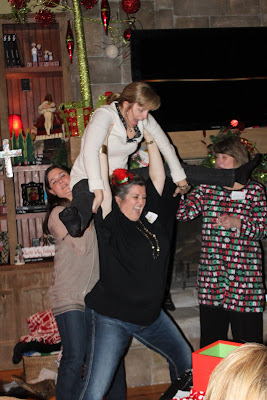 Yep. That's ALL there is to it! 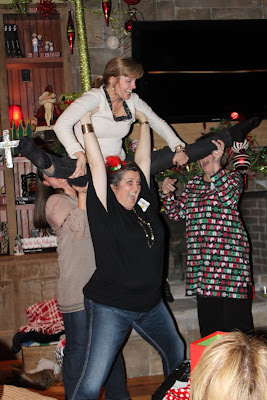 Paula standing back there like we needed a spotter. Ha. 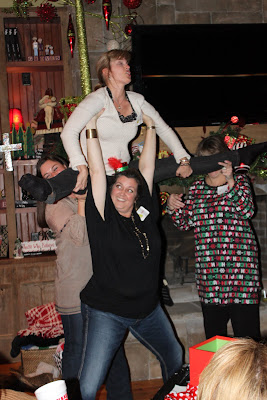 And look at these three little birds over here. WHAT are they discussing?! I wonder. 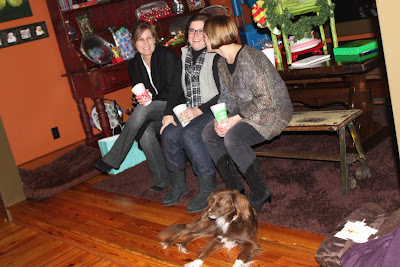 It was a good party. Fun to be with my friends, from all walks of life. And if you'd like to be invited next year, and are close enough to come, by all means, let me know. I'll add you to the list. 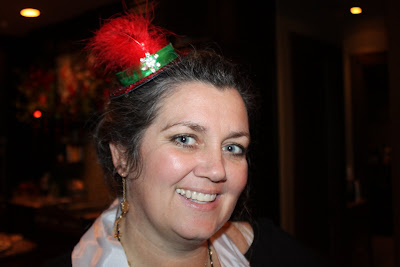 I want to come to your party! Of course I'm not really close enough. Your pictures sure make me feel like I'm there, fo show! I laughed all the way through that post. I bet it was a hoot in person!! (I had to prove something to my 9 year old son tonight at his basketball practice....that I could beat him in a "suicide". Remember those? Anyway, I beat him. But it wasn't by much.) Fun times!!

Have a Merry Christmas Mo!!

How fun!! So nice to have all of your friends together.
Merry Christmas. Cant wait to see what Santa brings Ellie and Gabbi!

i loved this i enjoyed reading about your party and seeing all the pics you took..and the story behind them all looked yall had a ton of fun i wish i lived close enough to come but iam all the way in northeast ga.. i guess i will just enjoy reading about your parties and all the fun you all have. yeah 3 more days till christmas i love christmas. i love waking up on christmas morning seeing what santa brought to me yeah i still believe in him and love getting stuff under the tree.. and i wish we still had litte ones to watch but all my nieces and nephews are either teenagers and young adults. oh well i will be waiting to see what your girls got and seeing the pics of them.. well have a merry christmas and enjoy it with your little ones cause they grow up so fast.. im going to go now and see what i can do i want to bead but i cant decide what to make. i love seeing your jewerly i wish i was as good as you.... i wish i could go with you to the bead show. i would be in hog heaven for sure i love love love beads of all kinds shape sizes i just love to bead and im willing to learn new stuff.. well im going to go i will check back later hugs and love ya

I can only imagine the amount of laughter that took place at this party! Ya'll have too much fun!

Bunco ~ ya'll really should bust out a game sometime ~ I believe your group would have a fantastic time!! ;) I nearly choked on my drink of Diet Pepsi when I saw Julie having two hands full of "Mo Ta-Ta's" while getting ready to do her stunt! I truly do need to move so I can join in the FUN!!

Have a VERY Merry Christmas!!