Two weekends ago, Todd and I went to the LSU game in Baton Rouge. I had to leave the girlies, so I called up my trusty sitter, KK, and all was well with my world. 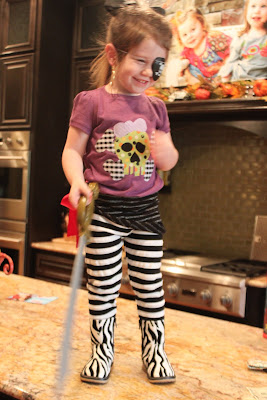 Only one thing! There was a big pirate party in the neighborhood, and I really wanted the little darlins to be at it. And I really wanted to see pictures from it too. I cut up an old pair of leggings to make Gabbi Girls' waist sashy-thingy. 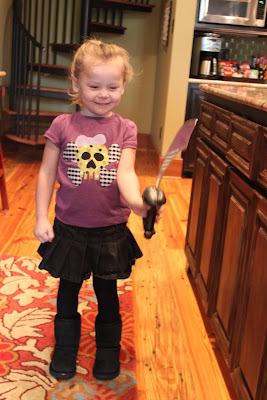 I recruited Breanna to applique them some girly pirate tees. Then, hit the Dollar Tree for all the accessories! 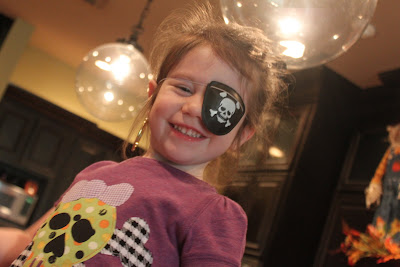 I gotta say, I think my little pirates were about as cute as they come!! 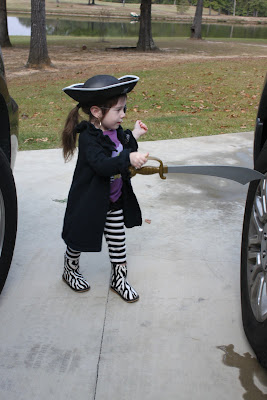 Snaps to KK for manning the camera and making sure I had plenty of pictures to document the party I misssed. 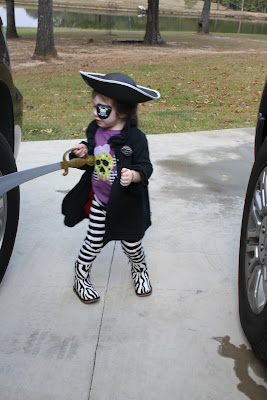 Rebecca, my friend from down the street, pulled out all stops (as she does every year) to make sure her boys had an epic pirate birthday party! 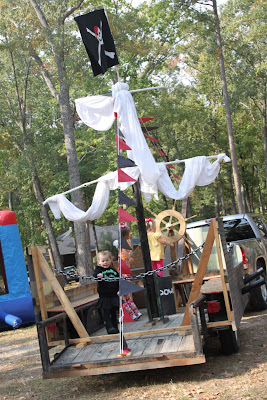 This included building a SHIP on the back of a trailer and letting them have a grand entrance to their party being pulled behind the truck!! 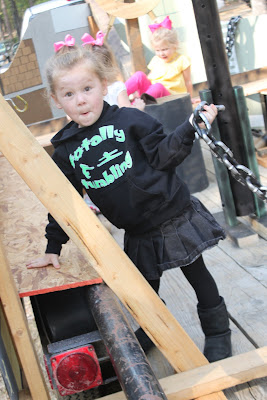 Gabbi Girl seemed to think the ship thing was a great idea! 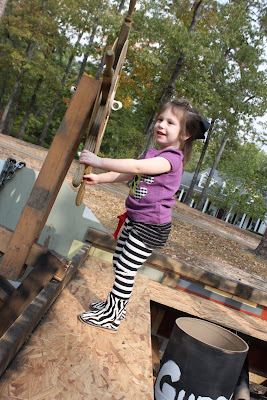 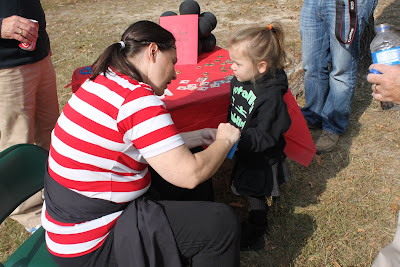 CHECK THIS THING OUT!! 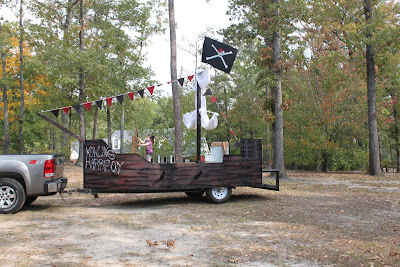 I love a mama who will go all out!! 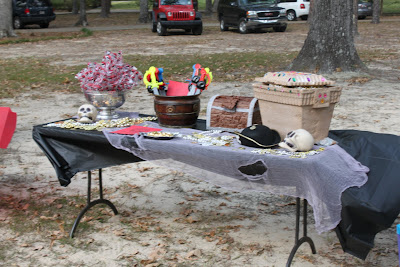 Not everyone was dressed, but mine sure were. Although Ellie refused to take off her sweatshirt the entire time, per KK. 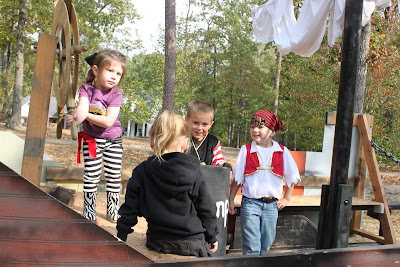 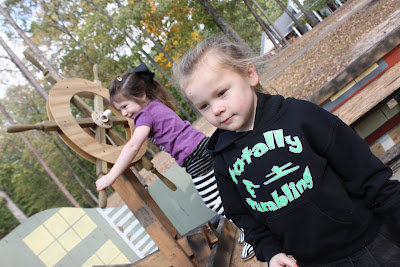 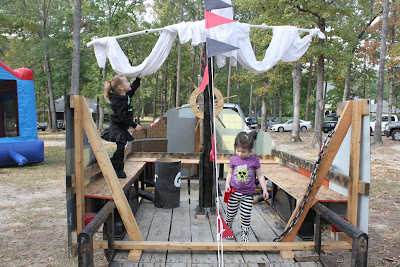 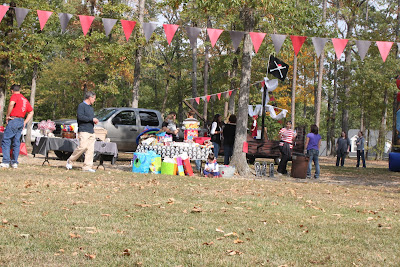 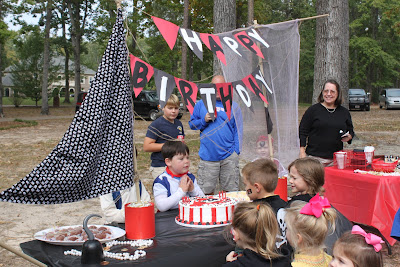 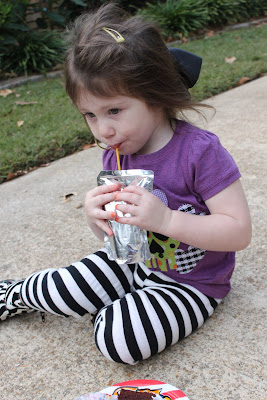 I think Ellie wanted to maintain an aura of being cool and aloof! 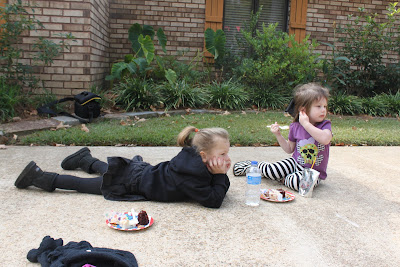 And when I say "cool and aloof", I mean COOL and ALOOF! 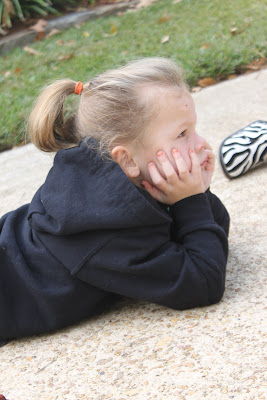 What a cute photo prop!! 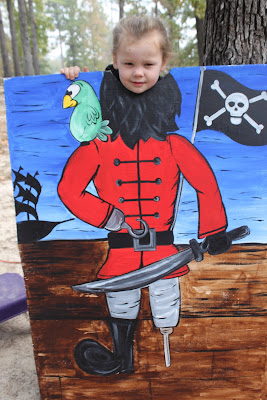 Looks like Gabbi Girl just settled right on into a dirt pile!! That girl LOVES a dirt pile! 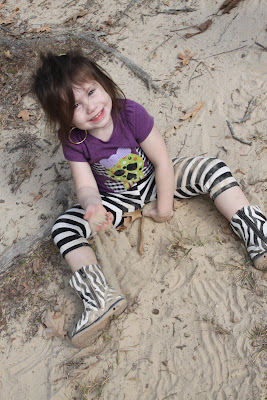 B and K had mostly boys, I think, at their party, but I appreciate them letting a couple of cool chicks being on the invite list! 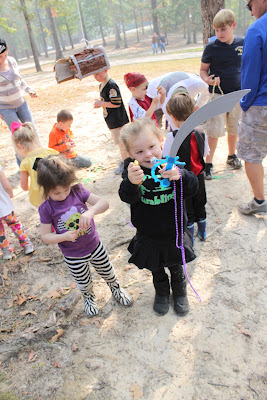 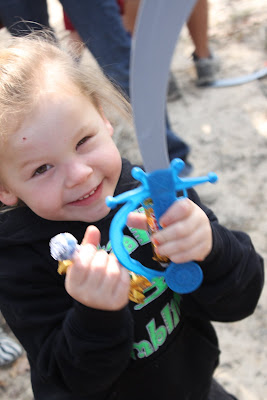 And even treat bags and LOOT to take home! 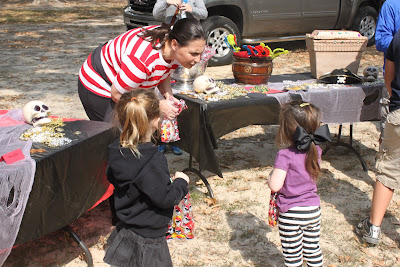 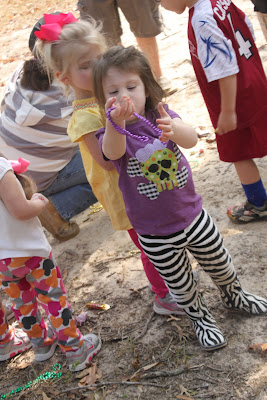 Thanks, Rebecca, and boys, for inviting us. It seemed like it was a major hit!!

Wish I could've been there too! 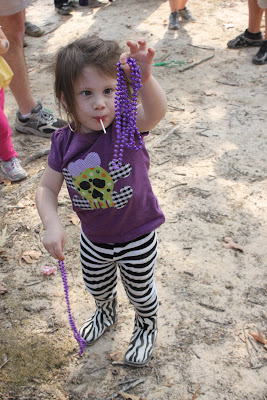 Fun! How awesome is that pirate ship on the trailer?! Man, you guys have the best parties.

Wow! What a cute idea. Loved the girls pirate outfits.

Thanks for posting about our party! I love to get other peoples take on everything!

ohhhh i love these pics of the girls so so cute as pirates... looked like they had a great time at the party. i loved the pirate ship and all the goodies that was there... oh mo did u get my message on fb?? i sent you my home address on there.. sending lots of hugs your way..

Super cool pirate ship! And GG made a perfect pirate!