Painting a run-through for a friend!

This is one of my strangest requests.... but, it's for a friend!! 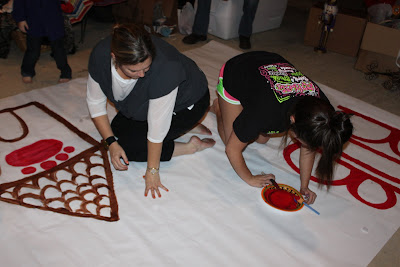 and it'd for a friend who reads myblog. So, you know... I HAD to do it! Not to mention if was for the championship of the "Toy Bowl"! 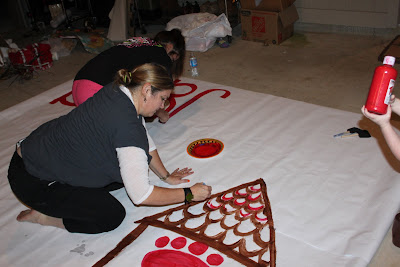 The Toy Bowl is the area's championship for the football title of the elementary schools. I think 3rd graders, to be exact. 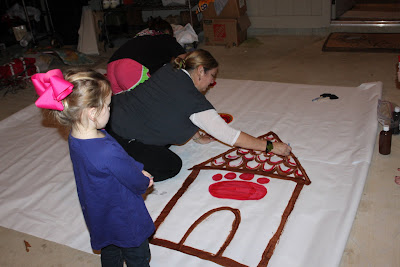 Ellie needed to keep herself preoccupied with the "big boy", Garet, who was there with his mom. She always seems to migrate in that direction. Lord, give me strength! 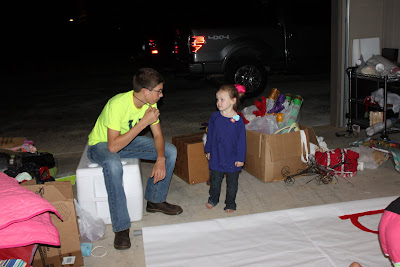 So, we decided to use the theme "rock the house" with our Drew Bobcats as the school/ mascot. This will also by my girls' elementary school, so we might as well get used to doing over and above things for the bobcats! 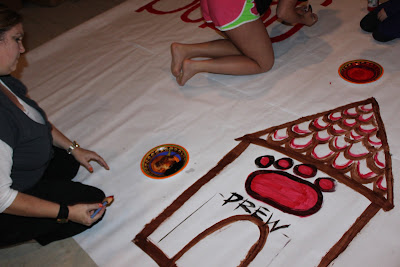 Sarah, who helps me in my art classes, also helped me get this run through done hurriedly so we could get back in the art room. She is a high school cheerleader, and paints many of their signs, so she was accustomed to this. 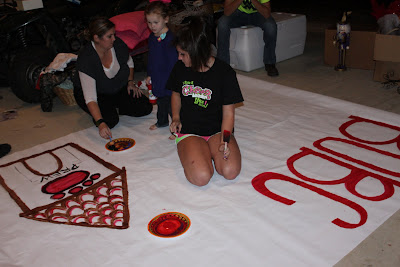 I was just cooking with grease. 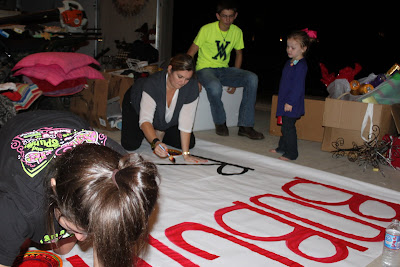 Until I noticed that I'd written, "Bobcats Rocks the House". Well, we all know that I can't have a plural subject with a singular verb. Duh! Sooooo, I refused to leave it like that. I just cut that "s" right off!! And Tami patched it the next day with more white paper. I felt like a heel!! 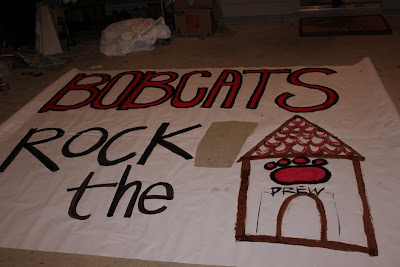 As for that filthy garage in the background, I should tell you, we were called by our old neighbors about two weekends ago and asked if we were at our old house. When we said we weren't, they called the cops, because there was a small truck backed into our old garage. Seems they had been there the past THREE days hauling everything we still had in that house ( I know, I know.. we should have sold it by now, but actually, and obviously, we hadn't totally moved out yet). There haul includes the fridge, the OVEN, a table and chairs, a couple of antique dressers, and then STUFF!! And I was not freaking out or anything until this week when I was looking through some of it in my new garage. THe sheriffs brought the stuff they found at their house back to ours. When I saw that my baby's FIRST hand and footprints were chipped, oh buddy... it was ON like a CHICKEN BONE!! Prosecute them to the fullest. I can replace all that other crap, but awww helllll naaahhh, don't be messing with my baby's footprints!! And a quilt my Nannie made for me a couple of years before she died! UN-COOL!! Anyway, I realize I hadn't mentioned any of this, but I try to not dump bad news here. However, lest you think we are pigs, I needed to explain the tons of J.U.N.K in our garage.

The real story was the run-through. ANd by the way, the Drew Bobcats won the Toy Bowl!! And I am sure they felt 10 feet tall when they got to run through that sign!! Thanks, Tami, for letting me be a part of this big day in those boys' lives!

How cute! Congrats to the Bobcats!
OMG about someone wiping out your old house! The nerve of some people. Glad you were able to get the stuff back.

Did you get all your stuff back? OMG! What has this world come to?

cool that you helped the kiddos with their sign!

i would have wanted to kill the burglars if they messed with my personal items like that!!!! and what nerve to go back over and over to wipe you out! good thing your neighbor had your back on that one!!!!

Congrats Bobcats! When Hunter played football at Drew they won the Toy Bowl. Man they were pumped! I remember Hunter could barely sleep that night...you would have thought he won a million bucks!

Thieves make me nuts! Don't blame you for want justice to the fullest.