Just the four of us. 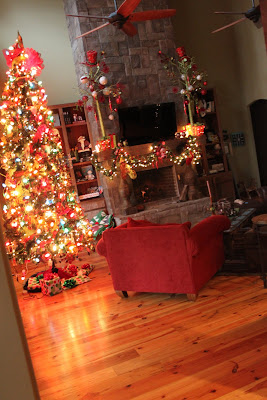 A slow, peaceful day at the Groves house. ONLY the four Groves in attendance! 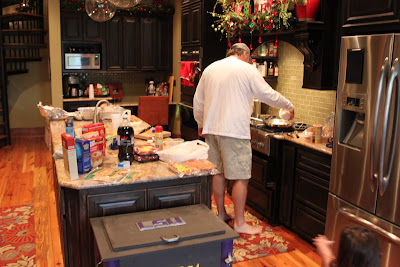 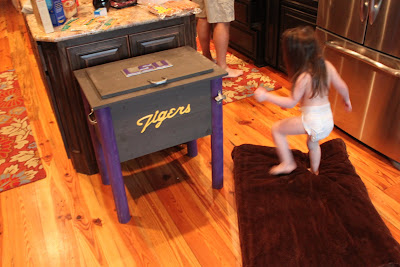 I finished up the Christmas decorations. 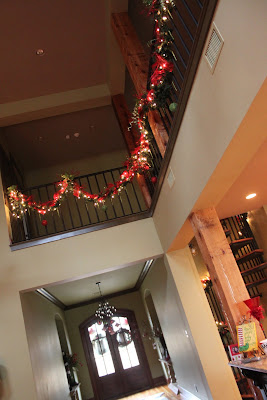 Gabbi tromped around on Lizzie's new bed. (was found... but was supposed to be coming from Santa Claus) 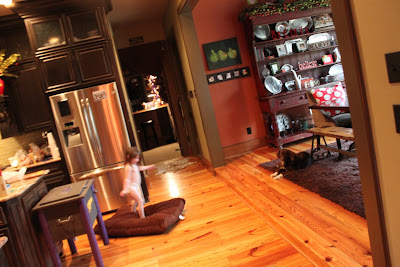 And finally, and very deliberately, I sat on the couch and tried to do nothing. That does NOT come naturally for me! 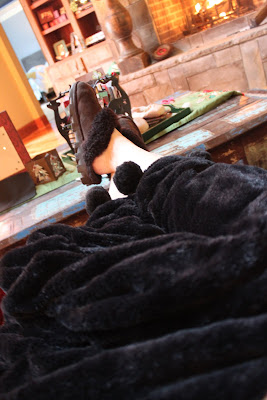 In fact, I found it so hard to do that I finally got up and grabbed a book I've been wanting to get in to. I am not much of a reader. I like the "growth" books that I can take and read a page or two at a time, and if bored, put it down and come back without missing anything. 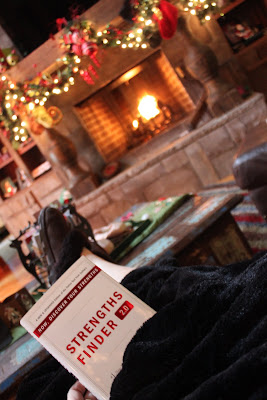 This one helped me find my strength. It came with a password that sent me to their website where I had to take a 35 minute test online to see what category my interests and predilections put me in. I was pretty shocked at the results. You should consider taking it yourself. I am looking at a new direction for my life in 2012, and I need to know if I am in my strength zone, and who I need around me to support me the best. This book helped.

As for Lizzie, we've had this bed since Canton (the second time). And this dog has NEVER laid in it until today! 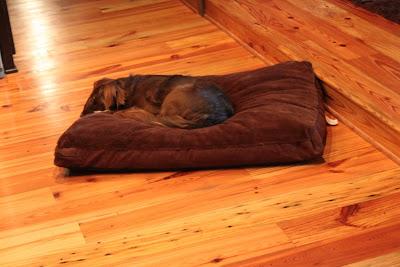 I just knew she'd like it if she tried it. And she was soooo enjoying that warm little bed. Until.... 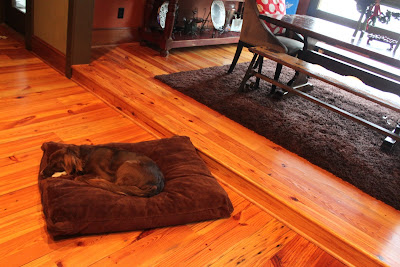 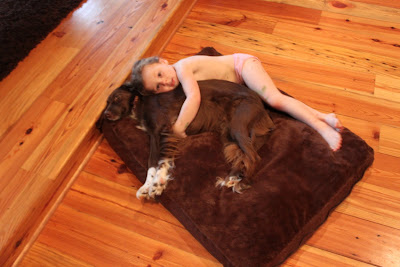 And so much for Lizzie's private time! But, they do look pretty snuggly! 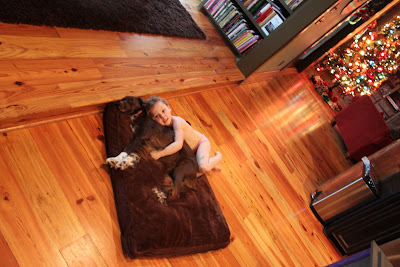 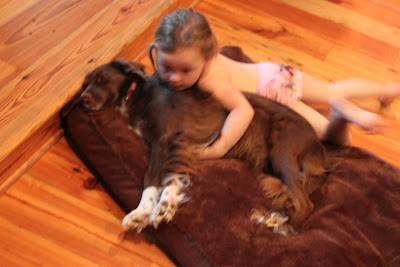 Until Ellie felt like she should reposition Liz and pick her up. 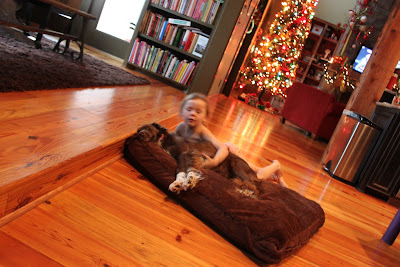 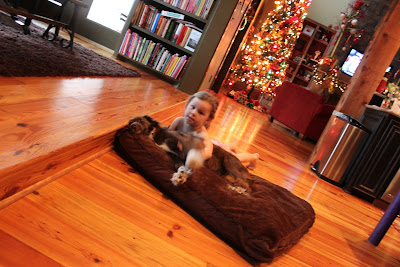 Hey, that might work!! E just brought her on over a blanket and a pillow and joined the Lizster. 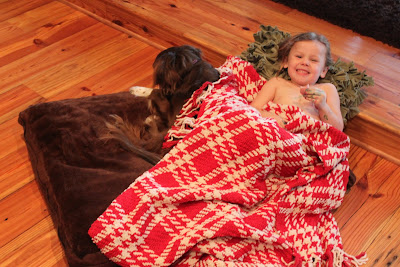 and I think fed her a little left over ham from our Thanksgiving lunch. 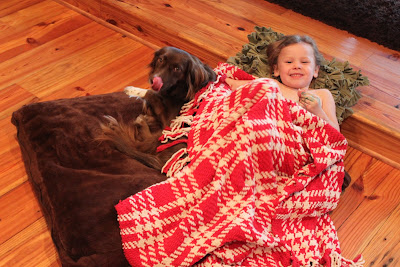 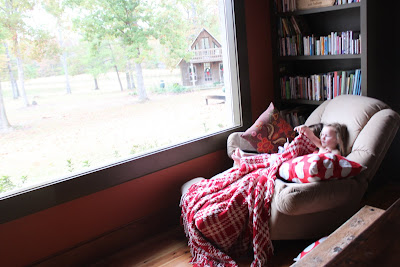 as Todd and I were strongly encouraging a nap, this is the closest we got to that. 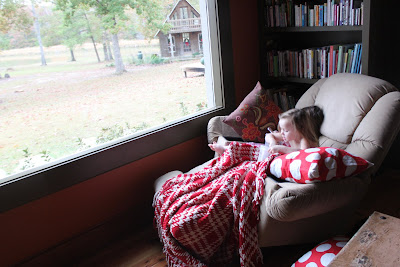 They told us they'd take a nap in the chair. 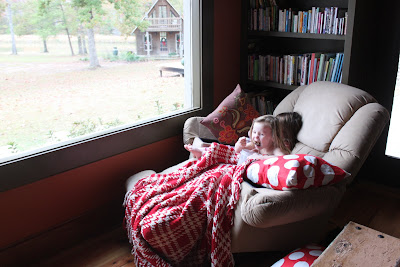 But, I think it became more of a spectator sport, as they watched the squirrels playing outside, and even the ducks as they are flying south for the winter, and landing in our pond out back. 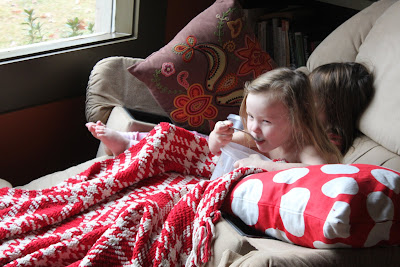 All in all, it was a pretty relazing afternoon. I really am trying to make a concerted effort to NOT do something at all times. My mind has gotten a little woozie lately trying to keep up with my crazy, busy life. 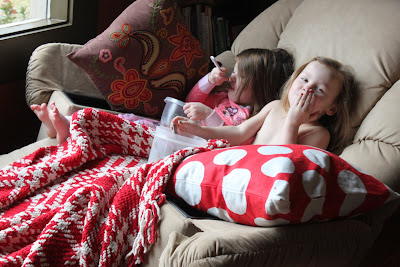 And since I've now had TWO doctors tell me I just need to slow down, I am really going to try. 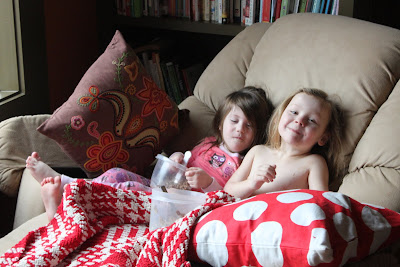 Waaaaay easier said than done!! But, I have less than a year with these two being at home. Or actually, NOT school age, so I am going to really try to spend more time with them in our home and make some sweet memories. 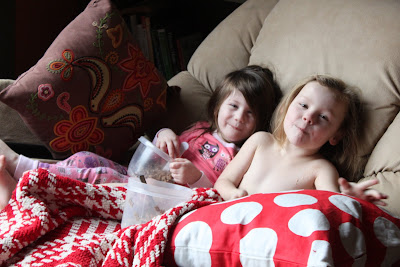 After all, isn't that what it's all about?! 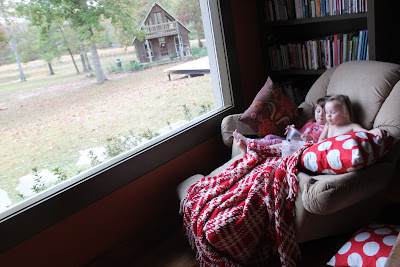 Can we hear an Amen to slowing down, especially this time of year!
Your house looks beautiful and festive.
Try and embrace your down-time, and remember, you rock no matter what!

So glad you took some time to relax. Praying it happens a little more often. The girls are precious, as always. I love how Lizzie fits so perfectly in your family!

Love this post. I can so relate to this. I'm in the "slow down" mode and it's been a process but it's a GOOD ONE. While I love your get-together post, I REALLY love to see just YOUR family at home. It's such a serene atmosphere. Please listen to the doctors, they are so RIGHT!! I'm speaking from experience!!

The Lizzie photos were just precious! She is such a sweet dog! She fits perfectly in your family!!

I have read that book! I am amazed at what my first strength was...Empathy. My husband could not believe it so he told me I needed to take it again! He tries to be so funny.

I love your decorated house! It looks very peaceful!

Yayy for more down time! It's hard to do when there are so many fun things in life to do! However, hopefully it will make you feel better and contribute to a long and healthy life! :)

you just need to take the time to sit and close your eyes. enjoy a little down time - it is better than putting yourself into the hospital with a physical breakdown!!! maybe plan 30 minutes or so a day in that chair watching the squirrels with the girls. get a squirrel feeder and a bird feeder or two. that will probably even draw in some deer. just enjoy the joy!!!

Love your Christmas decor! You definitely have the touch. Make yourself slow down now, b/c the older they get, the more involved they get and the more you feel like you are running ragged. But nothing I would trade for anything.

Pro Mo! I love the Strengths Finder. Just like the personality colors, I would love to hear what your strengths are. Mine are achiever, focus, individualization, responsibility, and strategic. Also, I'm hoping Robin can help you get your 2012 Art Retreat dates posted. My mom and I are ready to come!