Ok. Let's talk about our day in Madison! For starters... they have a Krispy Kreme! And that's all I've got to say about that!! 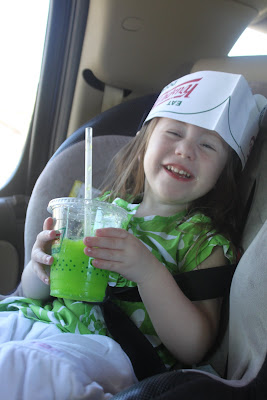 My girls were not quite as fired up about that as I was.... but someday they'll get it! 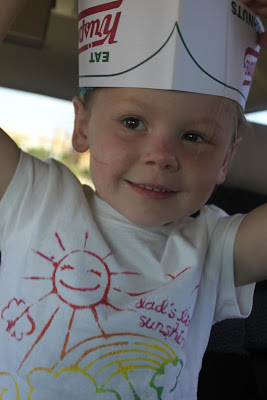 But what DID fire my 4 year old up is THIS! 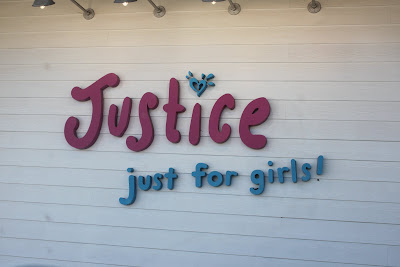 Nevermind that the starting size is a 6. And she is only KIND OF stretching her tiny little self into a 4. Mostly still 3T's! People who meet Ellie and know her only from the blog are always struck by how small she is. She just seems bigger, cause she has a BIG personality! Anyway, the baby THINKS she is a preteen like her "big girl" friends. And since they talk about Justice, we had to go in there too. Mostly, we got some accessories, but she did snag a much too big Wisconsin Badger shirt and a Green Bay Packer shirt which I just knew would thrill her daddy's soul.

And then, there we were. In the middle of Madison, WI, with absolutely no idea what to do next. Gabbi was a nightmare in the stores. She doesn't like shopping and that is where she tends to throw her biggest fits. Daddy was on the golf course with all the uncles. We had to be out of the hotel by 11, and soooo.... 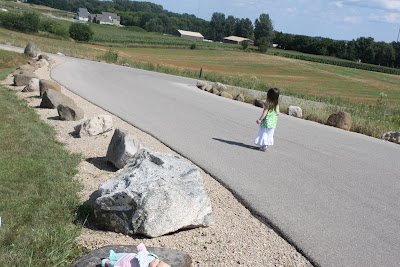 we found a park.

It was far from the types of parks we are used to seeing in LA. It was basically a blank spot in the middle of farmlands. 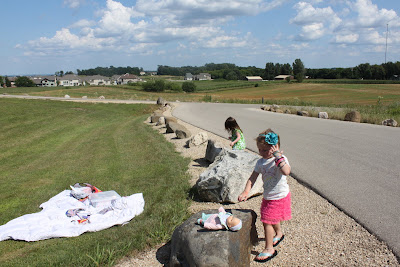 But we still got out a blanket and tried to make it fun. Ellie had some horrible reaction to the sun. This is about the third time this has happened this summer. She blisters up and all. Gabbi and I were fine, so it was not a sunscreen issue. In fact, the last two times she did this, she was slathered in sunscreen, so I thought maybe it was an allergy to the zinc oxide. 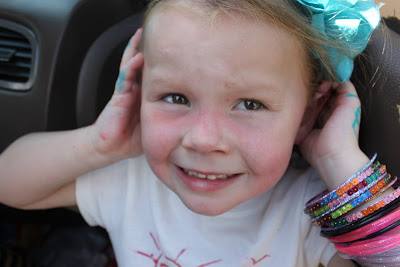 She even has a whole new set of scars on her nose from the last blisters she got. I have absolutely no idea what could cause this. And in fact, she looked like this for the remainder of the trip (about 5 days)... bright red. 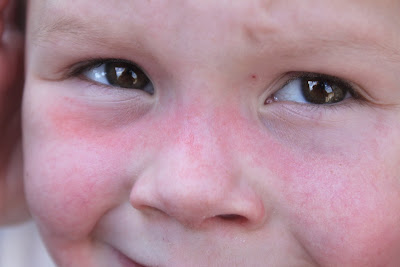 I took pictures so I could show a dermatologist when we got back. You know how they just look at you like you're crazy when you are at the doctor with a complaint where the symptom has actually gone away?! Well... now I have proof! 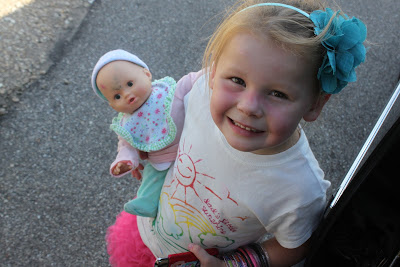 We learned about stone fences while we were at this park. Seems glacier melting had something to do with it. 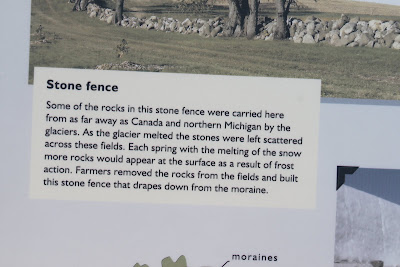 They were quite majestic. Hard to believe someone piled all these stones up to make these fences. 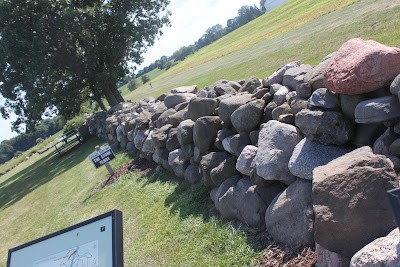 Particularly since they went on as far as the eye could see. My baby headed on out to check out the sunflower fields. 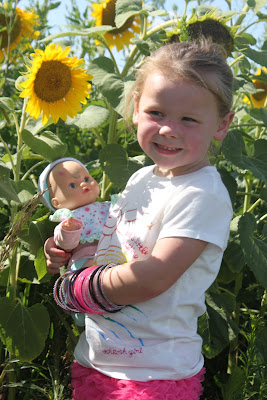 Please note her arm and some of her new accessories from Justice. She was pretty fired up about those! 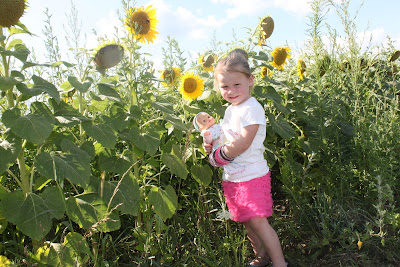 And might I say this was quite a sunflower "patch". Can you tell how enormous this planting was?! 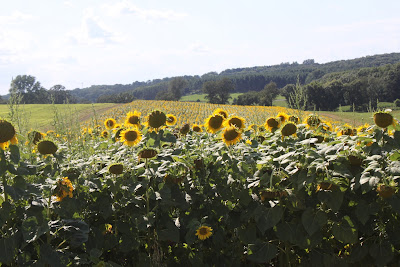 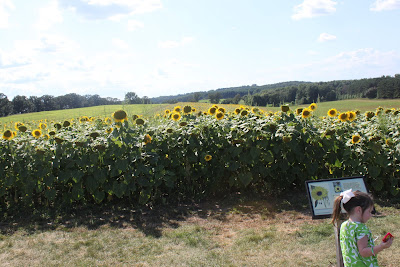 All that exploring left my girls whipped and need of a little break. This is as fancy as the "equipment" gets at this roadside park!! 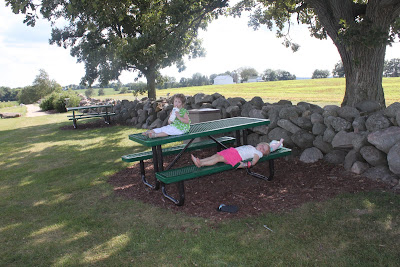 Right about here, they are breaking the only rule we saw which was don't climb on the rocks. I quickly got them down. 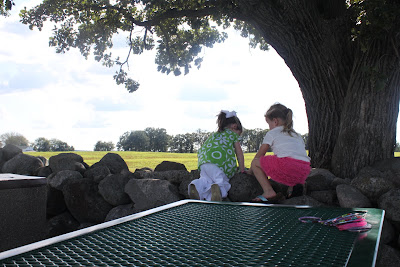 And all that exploring left me with two tuckered out young uns. 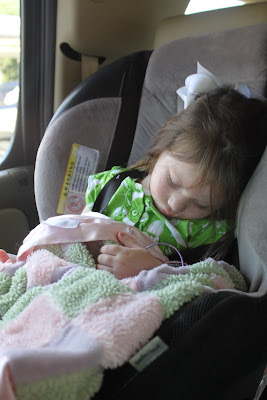 We headed back to Uncle Tim's to sit and wait on the men to finish their round. 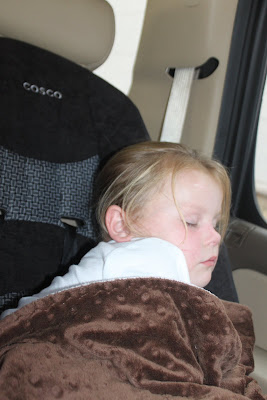 Once they got back, a hot game of cornhole began. I think I called this washers at the beach and was corrected by the hubs! Sorry... it's cornhole! 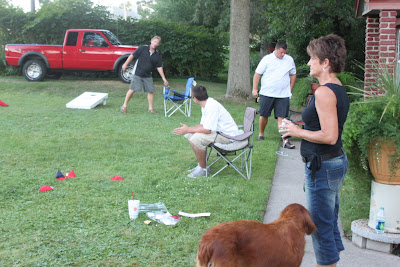 And apparently all the Groves men really enjoy it. 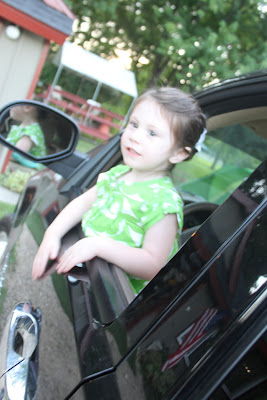 If I said they offered to let me play, or even toss a single bean bag, well, I'd be lying. This is a "man's trip". A "man's game". and the women are kind of on their own. I can't wait til my babies are a little older and ENJOY shopping... we'll show em!! 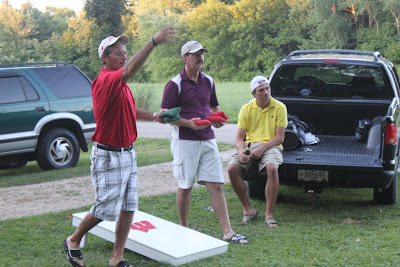 They'll wish they'd let us toss the stupid beanbags. We'll come back with bags of shoes instead! ANd THEN ol' Daddy will wish he'd included us! 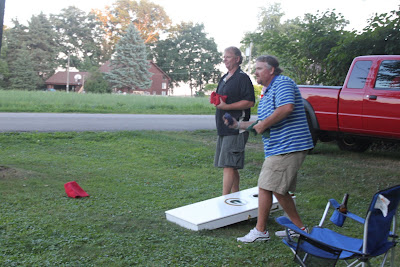 Nice form, Uncle Toby. He's the one I left out of the opening line up. He is also the family comedian. Just a nut! 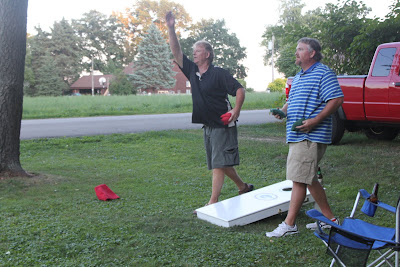 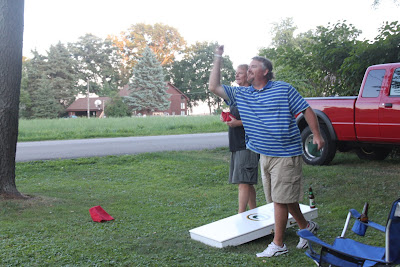 Todd absolutely LOVES being with his uncles. Probably the thing in life he enjoys the most!! So, I dutifully just sit back and let him have his moment. Or moments. Or DAYS! He is very happy when we are in Wisconsin with his peeps!!

I love Justice too, I couldn't imagine being a child and walking in there! We have one and any time there is a girl birthday party, you can bet to find a gift from there.
Poor Ellie! When y'all get answers let us know what it was, that is strange. I'm thinking must be something from the sun screen too. I wouldnt know what to do with a park like that! We have tons of play equipment and water spray sections at every park!
Glad to hear Todd enjoyed the visit with all of his family. Can't wait until your girls want to do some serious shopping with you!

Ohhhh, shopping at Greenway Station???? My favorite! Justice, Michael's, Archivers, World Market, etc. You should've brought that animal lovin' Gabbi to see our farm. We have plenty of critters that would've kept her content! ;)
Cornhole is definitely a huge happening here! Hours & hours fun throwing little sacks.
Poor little Ellie isn't on a Sulfa drug by chance? A side effect can be a terrible reaction to sunlight exposure.
I hope sweet little Gabbi has an awesome birthday party.

I hope that birthday party has great weather for a three-year-old! Thank you for the pictures!

As usual Mo, you weathered the odds and showed your babies a good time without the dudes.

Looking forward to seeing the pics of a fabulously planned birthday party for such a precious little girl..and Gabbi who will be right in the middle of it all...unless she is with Lizzie..

I just got back from a week long trip to NY to visit my mom&just finished catching up on your blog.

I have that same type of reaction to sunscreen as well (it just started this summer) I asked my doctor and he told me to try PABBA free sunscreens, and since I have switched to the PABBA free ones, I have not had an issue!

Melanie..mom found a place in Jackson that has krispy kreme bread pudding!!! She said it was like Nirvana!!!! Let me know if you need to know where it is!

You cracked me up with the "corn hole" thing... we just had a family reunion a couple weeks ago, and one of the cousins asked if anyone wanted to play "corn holes"! We all looked at her funny and said "Corn holes? What is that??" We all just call it BEAN BAGS!!!!! Funny!

Hope you are feeling better!
Have a marvelous week!

I bet it is the sunscreen that is making her face break out in blisters. Have you tried baby sunscreen?

It could also be an allergy to aloe.

My hubby is from Madison, WI and we make that treck at least once a year from MS. It is a long haul, but beautiful country. We are headed up in October for a little golf, grouse hunting and the WI Badger Homecoming. Should be a great time! Next time your in Madison on a Saturday in the summer, head downtown to the Dane County Farmer's Market. You will be in heaven! Go Badgers and Go Packers!

Thank you for taking "us along" on your WI vacation! I have NEVER seen Wisconsion w/out snow!!

Poor Ellie. I see you got alot of good responses to the problem she is having! Hoping all is well!

The next time you make the trip let me know ahead and maybe I could meet up with you our at least tell your where all the scrapbook stores are as well as parks and thingks to do in the area.

Can't imagine the girls weren't excited about Krispy Kreme! Show me a dozen hot glazed and I am in heaven "fo sho"! Makes my mouth water just to think about it.
So glad your trip to WI was a good one. Staying in touch with family is so important. Hope Ellie's rash has cleared up by now.