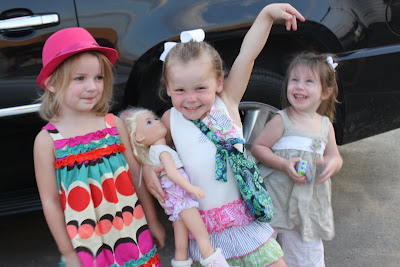 Ellie had to pack Big Baby and apparently a purse almost as big as her. 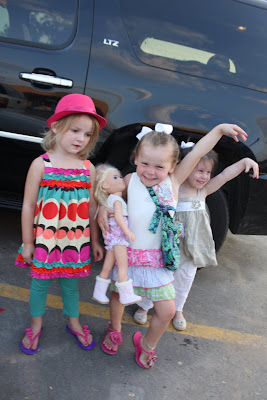 Maddi threw on a hot pink fedora, you know, cause EVERYONE wears their fedora to Wal Mart. And Gabbi just did anything and everything she saw her sister do! 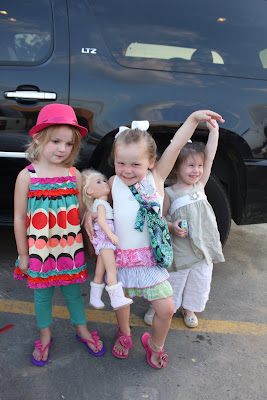 I don't think I have mentioned that she calls her "My Ellie Sue", which actually sounds more like, "Muh e-Sue". (with that e being a short e). It's the dadgum cutest thing! 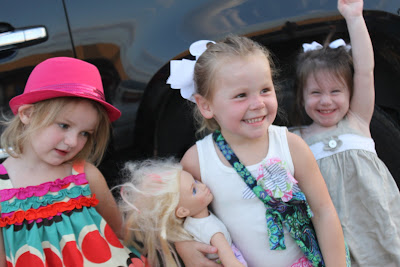 We ran into Keith and two of his FOUR boys while we were there. 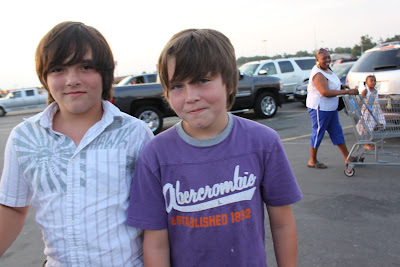 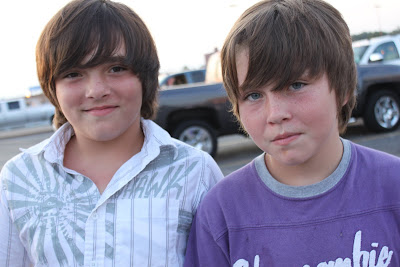 Taking three girls to Wal Mart makes me have a whole new respect for those of you with three, four, five kids. WOW!
Mo

I wouldn't dare take three kids to walmart! Love their outfits.
Ready for some party pics!!!

Loving Maddi's fedora and the girls mirror posing. Such happiness wrapped up in three little 'divas'. Such a blessing and such a handful. God's love is plentiful!

Love me some Malwart!!(That's what Bree calls it). I can't ever go in there and just pick up a "few things", I always come out w/a cute little outfits, a toy, a cute a lil "something/something" for me, andtons of other "things I just had to have"! How do they do that! Dont you just "love" the marketing strategy at the "check out counter"!! Right at the kids eye level. Tons of candy, little toys and everything a kid would salivate over!!! Sam Walton...you're were a genius!! I think Walmart need to change their slogan from "we roll back prices" to "you roll out broke"! Sheesh!

A Walmart trip with three girls....you were brave!

What fashion divas!! So cute! I try not to take both my kids to Walmart either when I have to make a trip; just asking for trouble and a crazy momma!! ha ha

Aye, you are BRAVE! No Walmart, no grocery store, no shopping at all with all 3 kids, unless absolutely necessary.

They're adorable as always.

I'm with Zhohn...needing some party pics!

JW... you take your camera with to WalMart??? Cuz that lady walking behind the two boys is laughing at you for taking pics in the Walmart parking lot! LOL!!!!
My girls are 5 and 12 and I hate taking the two of them to Walmart! Always seem to find extra things that "sneak" into my cart when I get to the checkout!
Bless your heart for taking 3 little ones!

To snekcip... Amen to that! Love the slogan change!

Taking my 5 to walmart costs me my sanity as well as my money! Happens way more than I'd like...