It's a rarity that I get to post about Todd's side of the family. It's just that, well, honestly we don't visit that much. When Todd's parents are in town, we will go visit Larry's side of the fam. And that typically means his sister, Pat. This is where Gabbi Girl hung out most of the time! 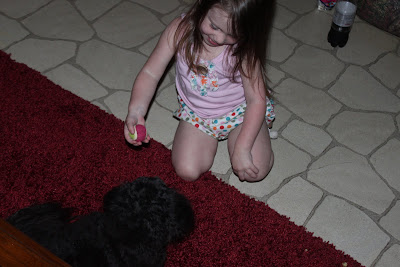 So, there's Todd and his step dad, Larry. Larry has raised Todd since he and his mom married when Todd was four! That is how Todd got transplanted to Louisiana from Wisconsin. Guess I need to say , thanks, Larry, for bringing him to the south! 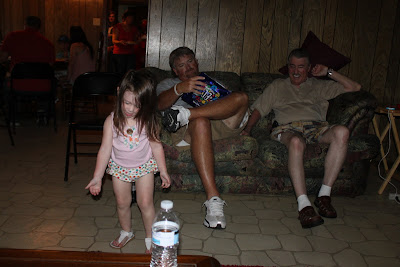 And this is Pat's house. When we go to Pat's, Donnie is always the one who volunteers to cook the whole spread. He is a lot like Todd, in that he really likes to cook. 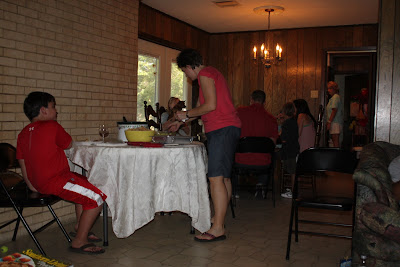 Oh, hey! This is Donnie! And Larry's sister, Pat. 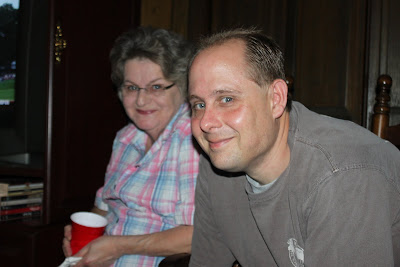 Interesting tidbit.... Donnie is a twin. And his brother is Ronnie. And I went to high school with them. And this is his wife, Marlene. I also went to school with her. Actually, I think I was a weeee bit older than them. We realized the other night that we will both be married 15 years this year.

They were married only a few months after Todd the Bod and I tied the knot. 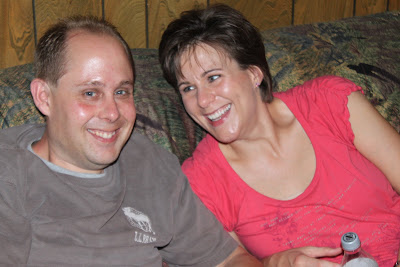 And this would be Todd's niece, Jessica, and her fiance', Daniel. She and Daniel will be getting married on October 1st. They are having a backyard wedding... reminds me of mine and Todd's. We had a backyard shindig too! My Poppa married us. I miss him! 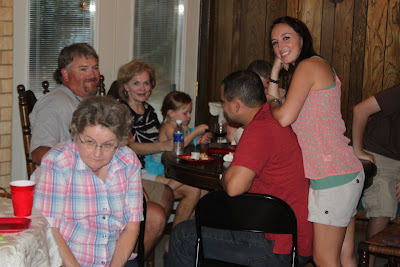 What's a family get together without a cake for somebody!? This one was for Pat. 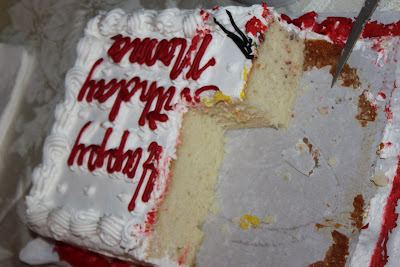 Here are the little engaged lovebirds. Ahhhh, young love. I need to tell them... it only gets better with age. I was talking about this the other day to a patient. I told her the first two years of my marriage were my hardest. She said to her, they were her favorite and best. Strange how people have such different opinions on this. Anyway, just thinking out loud! 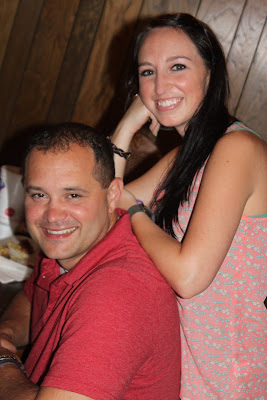 My hope for them is that it just gets better and better.

Hey Mo, you know what would be an awesome blog post? Yours & Todd's wedding photos......what'cha think?

Hey Mo.....I have a "transplanted" cheesehead too!! Mine was born and raised in Milwaukee....but his job with KCS Railroad brought him down south....and we will celebrate 13 wonderful years on Sept. 26th. He is my soulmate fer sure!!......huggers, BJ

So, Todd must be an only child? My hubby and I also had an outdoor wedding... it will be 14 yrs the end of July! Where did you and Todd meet? I think you may have mentioned this before, but I can't remember!

Mo,
I agree with Amy K, I'd love to see a blog post Blast-From-The-Past and see your wedding. It's great to see some of Todd's family, and get to know him better in that way!

Oh, and Becky,... Mo would love to come up with some charming little story about two young innocent hearts coming together... but she also always remembers to quietly mention that it was in a bar when she and The Bod first met!!

Thanks Maggie! I think I may have heard that story before... but sounds like a good story to share again! lol!