Headin to the mall.

Ok, so this was on Monday. Staci and I let the big girls take the morning to head to the world's greatest outlet mall for a little shopping. Too bad for them when we passed them in the parking lot and decided to leave our girls with them while we went and did the same! 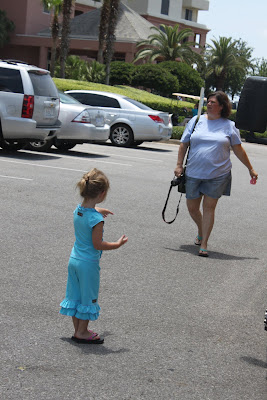 But just a few minutes prior to that... we were headed out! It took the usual half hour to get Ellie Sue dressed. I mean, I expect to fight over what she wears when she is a teenager. But... she is THREE, well, I just don't have the energy sometimes. It is from which panties she will choose to the gown she'll wear to bed, and don't even get me started on shoe choice! 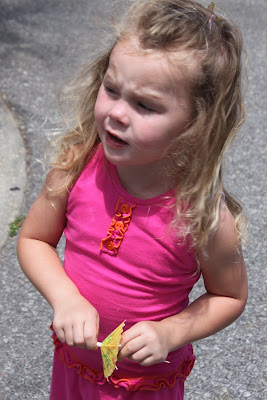 On this day, I pulled the ol' "Hey, why don't you and Madi dress alike?" trick. I had packed two very similar outfits, and lo and behold it worked.. 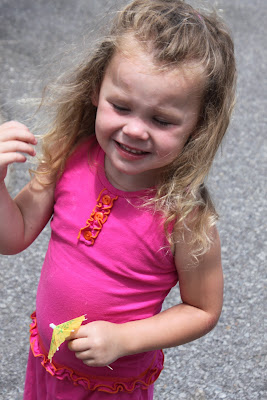 There was one catch... 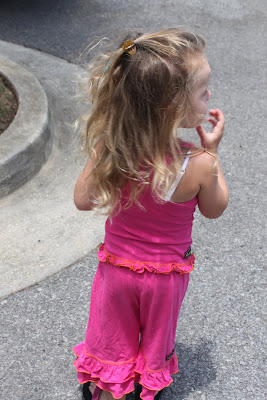 MY SISTER suggested she wear that little training bra (I DID NOT OK THAT ON THIS DAY OR FOR HER TO BRING IT ON THIS VACATION AT ALL!!). Sho nuff, she was A-OK with the outfit once HER AUNT gave her the OK. Staci said that was payback and that is what being an aunt is good for.

Because please understand, I am not ok with her wearing that. And I am not ok with the fact that she L-O-V-E-S it. She loves all things big girl! Where in the world does she get that? Staci thinks it's from hanging out with Emma. But really, she doesn't hang out with her THAT much! She just seriously has an affinity for all things "mature". This could spell trouble!

But then we have this... 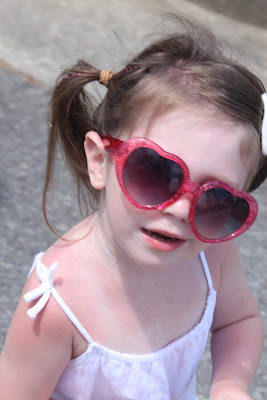 Swet little pigtails, never a word about what I put on her. Oh, Gabbi, you are a mother's dream. 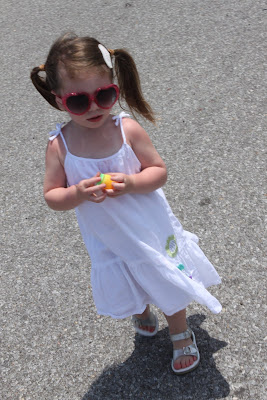 And speaking of dream... this is where we are staying. I think I have shown it before, but there are four towers of condos, and the middle joint is called the clubhouse. Yesterday, they had glitter tattoos, shark tooth necklaces, and sandy candy projects. Then, last night, there was a Dive In Movie (Tangled) which we missed. :( But, CoCo 's mom was in town adn we went to meet her for dinner. There'll be another one. But it'll probably be a BOY movie!! 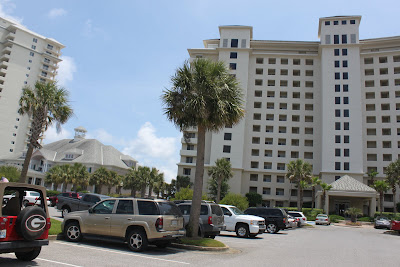 Thanks for all the input on the art night, and MINDY, YES, I do need help with the planning. My blog pal, Suzy, is also up to help me. And if I wait long enough, Breanna will move back to north Louisiana and it'll be on like a chicken bone!!

Let's get to commenting, chicas.
MO
Posted by melanie, aka Mo at 9:22 AM

Just you wait.. that sweet little lady will also turn 12 before you know it! Can't wait to see what today brings

You are in BIG trouble when Ellie gets older if you are having this much trouble with her clothes choices when she's such a young sweet thing! LOL Seriously, she can't buy her own clothes yet so in all honesty you still have control(don't take her with you when you buy clothes). As a teen, when out 'malling' with her friends is when she'll buy herself what's 'in'.

Mo - now I know I don't have to do the battle-ing with Ellie about her clothes each day, but I love how independent and strong willed she is! She knows what she wants. That, and her confidence, will be invaluable tools as she gets older. The world can use more kind hearted, strong women in it!

Also, it's only clothes afterall - let that baby wear what she wants :)

Aww! Ellie is just making things even because Gabbi is such a dream. Haha! I can not wait to see her in a few years! Can you make a promise that you will NEVER stop blogging??? PLEASE! ;)

Did Todd ever mail my cuff??? (we'll blame it on him!)
I'm leaving for Disney Friday and would love to show it off!
If not, I'll still be excited to have a little package when I get back.

You just keep crackin' me up!! I SOOOOOO LOVE Ellie's strong-willed, independent attitude! I have a 5 yr old just like her! Some days I go to daycare and say "Sometimes we have to pick our battles, and today was not one of them! So please note that she dressed herself!!!" And I also understand the "AUNT" rules.... I, too, have a sister who likes to undermine me, just to get my goat! I have 2 girls, and she has FOUR BOYS! But I wouldn't trade these days for the world!

Was the training bra payback for the panties pic? Ya'll crack me up! I love Ellie's hair--it's gotten so long & pretty! I think it's hilarious that she's such a "pistol" at 3! She's already so sure of herself, and I think that's just great! Like somebody else said, at least Gabbi balances it out! And like Zhohn said--please promise that you won't EVER stop blogging--I'd be a mess! Gotta have me some Mo' Joy!!!

I must agree with Tricia that you have had a part in creating the "mess" that is Ellie! But she definitely knows what she wants! I think it's adorable. However, I just have one boy and he argues with me on clothes too. Just wait til they are in school and the other kids influence them! oh my word!!

Keep sharing and never quit blogging or I may have to stalk you in person...and that would be weird!! HA

Ellie is a doll but I don't envy you at all!!!! And I love Gabby's pig tails!

I NEED TO CLARIFY.. I DID NOT BUY THAT TRAINING BRA!! She "stole" it from Emma's house, and at our house, it is like a treasured gem! Mo

I've been catching up on the last few days. LOVE Ellie's hair all soft and flowy looking. GG is a lil daredevil with that water. She'll be swimming before ya'll get home. My BIL has a condo at the beach club(awesome grounds) and one at the Mystique but recently just sold both. Enjoy your vacation. Oh and good luck with the clothes battles. I'm sure you are in for many more in the future.

Let's talk and get it going. I'm more than happy to help in any way.

Okay, it's official - you need to just quit your job and blog full-time! I am loving all these CUTE pictures of these sweet girls. I was a Gabbi with an older sister who was an Ellie - she always referred to my brother and I as the "kids" like she was part of the "adults"! I can remember watching her and Mama fight over what she was gonna wear. I could never figure out what the fuss was about, I always loved how Mama dressed me. We shopped together most of my adult life and I still miss her input. She always called me Baby Girl until the day she died. I always thought it was just because I was the youngest. I did not have a daughter but your blog is giving me some insight. Hahaha! She and my sister did have a great relationship as well and often enjoyed joking about their earlier battles!! I love seeing strong women raising strong daughters comfortable in who they are! You go girl!!!!

PS. When I was little I always said I was going to live across the street from my mother and as it turned out I never lived more than about a mile away. So you are probably going to have Gabbi sticking nearby forever! Hooray for you!

My niece who is 4 walks by the "kids" bras in Kohl's and thinks she needs one too...makes me glad I have boys!

Oh my...are you in trouble! Bree is currently into "sparkly red Dorothy shoes"! She wears them to school almost everyday!! Yep the kid is obsessed with the Wizard of Oz! She is even calling the dog TOTO! Poor dog just follows along! Guess the dog "school of thought" is..."dont matter what you call me, just CALL ME for dinner please"! :)! Enjoying the pics and NOT ENVYING you at all w/Ellie! My mom who always had "a way with words" would sometimes tell me when I tried to get a lil sassy....."don't let your mouth write a check, your butt can't pay for"!! I got the message RIGHT AWAY! Ha!! Gotta loves Mom's wisdom! I used it on my kids as well...although they did try me....lets just say they "bounce a few check" off their behinds every now and then! o_o

You have me laughing so hard about Ellie swiping the training bra from Emma. You have a strong willed child that I thoroughly enjoy. She is a living doll. I LOVE her spunk!

That is so funny about the training bra! Well at least she will want to wear one when she really needs one! My daughter will be 8 next month and has told me a few times thru the years that she is never wearing one of those things when she has seen me in mine!!! Girls are always a challenge that's for sure! :)

I love reading your blog!! Never a dull moment! Looks like everyone is having a blast!! I hope to vaca at the gulf shores sometime!! Looks beautiful!

Look how long Ellie's hair is!! So pretty! You mean they make training bras that small?? I HATE bras. Would like to beat the person that invented them. I'd rather them hang down to my knees when I am old that be so uncomfortable all the time. Just sayin'.

Oh, you just wait. My 11 yr. old came home from school a few weeks ago, and clearly had washed mascara off her lashes before arriving. But, apparently I'm super clueless, because NO WAY did she have makeup on. mmmhhmmm!

I can picture Ellie at the mall, wanting to shop at the tween stores!

Didn't Jin Jin always tell you that she couldn't wait for you to have a daughter just like you someday? Now, she tells you, see I knew you'd have one just like you! That's what my mom told/tells me, so I just figured all moms told their daughters that.

OK, so "on like a chicken bone"????? What is that? Must be a southern expression, 'cuz that's one I've never heard before!!!

yes you are right but what about custom kilt