When we went out to Fort Morgan to take family photos. While we were there, the Fords took their family photos too. That left these "extras" with no family! 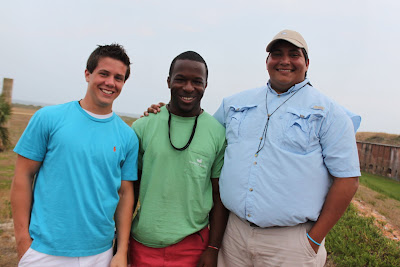 So, I grouped them up and made them feel special. Ohhhhh, waaaaaittt!!! Did I happen to mention that Julianne's boyfriend, Peyton, was Clayton's (Paula's middle child's) best pal and choice as a beach friend. So, we had this little romance situation I had to keep my eye on! 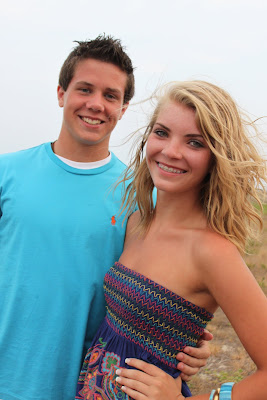 Actually they are both really good kids, and if you didn't know it, you would have no idea they were even dating! They kept a healthy distance from one another, at least in the presence of adults, and Julianne never left my kids unattended to hold hands or smooch. Good to know, huh, Judy?! 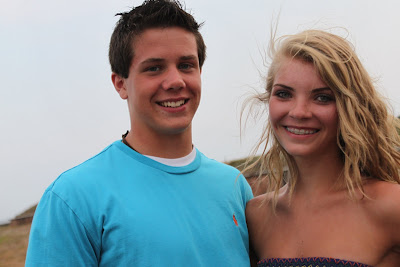 Austin and Aaron are on their last leg of summer with their boy, John. Well, actually, Aaron and John will be headed to LSU in about a month. Austin, I believe, will be staying in Monroe at ULM. 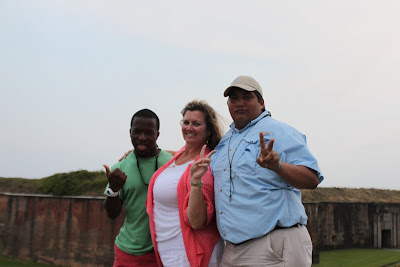 The Ford Family was down here taking really awkward shots, since the Fort was having some sort of candlelight tour and was not open to the general public on this day. Naturally!! 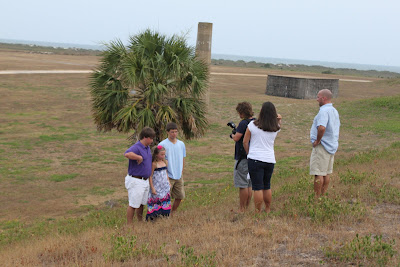 Seeeee?!!? That's the line to get in. "IN" being where we could have gotten some really cool backgrounds for our photos.

Instead, we were on this hill! 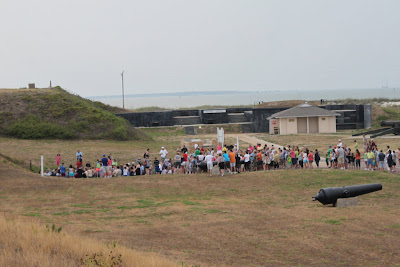 This is the very tip of the peninsula that is Fort Morgan, AL. Have you checked a map yet to see that little jut out at the bottom of ALabama!? 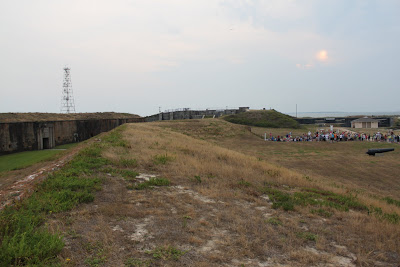 And I am not sure if I caught him in a pensive moment of reflection or if he is just being weird! 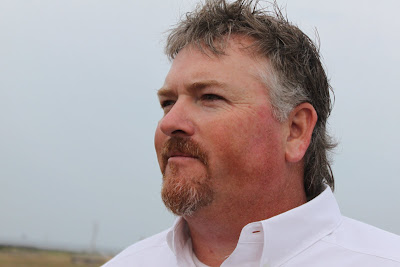 GOTTA be being weird! He'd never hold a profile for me if he knew i was taking his pic! 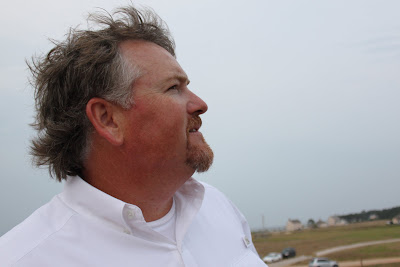 I think it's kinda sad that these three will be busting up this year after being so close in high school! They THINK they'll be friends forever, and who knows... maybe they'll end up next door neighbors, like me and Paula, but likely not. And college has a way of giving you a whole new set of good buddies. ANd next thing you know, you are all disconnected! 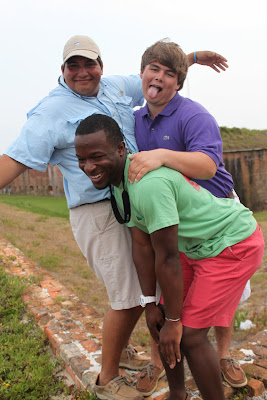 They're just goofy at this point. And like it that way. 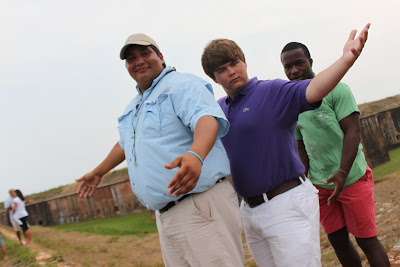 Aaron intends to work for the athletic department, namely the footbal program at LSU. John will be pledging a fraternity. And Aaron... I have no idea! 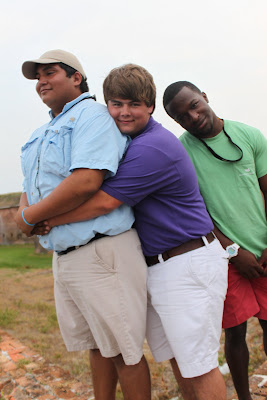 They called this one, "awkward dance photo". 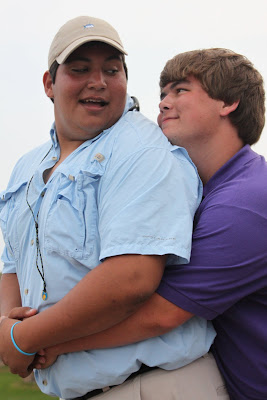 I guesss they are ok with their manhood.

And have I introduced you to Ana? She is Paula and Johnnye's "Mary Allison". She has been keeping their kids for about 10 years or more. 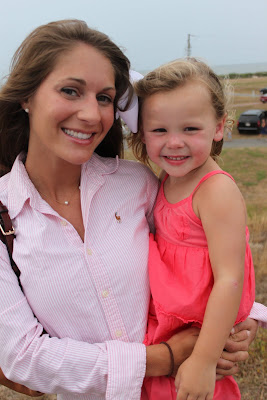 She is at the beach every year with us too. 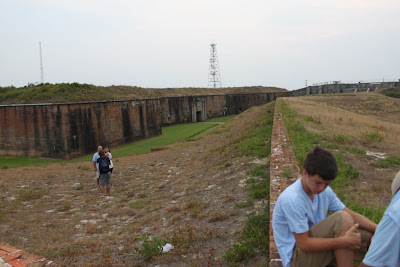 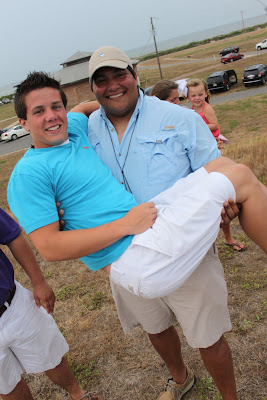 And it is usually hard to get boys to do these stupid things. But, put Aaron in the mix, and it "stupid" seems to come naturally. Sorry, Aaron.. just sayin'! 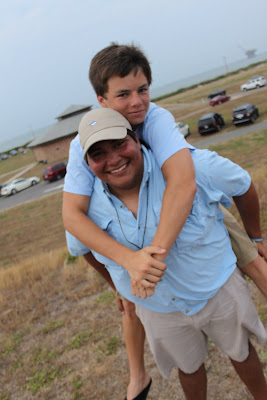 Peyton and Clayton Clayton is big into baseball, and the Fords are heading straight to Lafayette, LA from here on Saturday for a ball tournament! 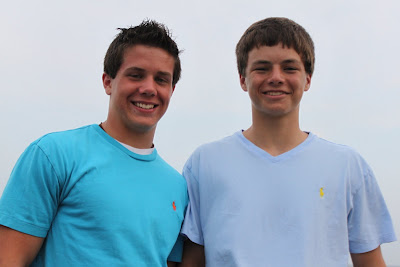 Still hanging out, awkwardly, on the levee. 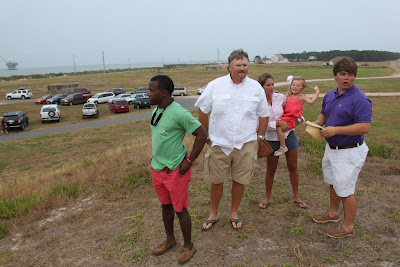 And then the adventure really began! 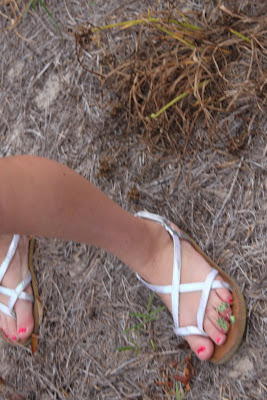 It started with Emma Lou, who walked up with CACTI stuck on her toes.
I mean ACTUALY cacti!! 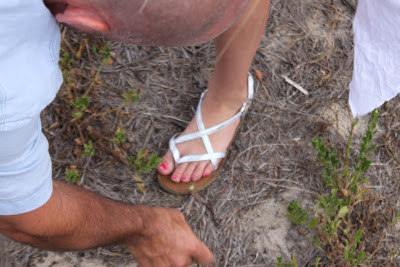 And then, Todd took a few more very odd photos He is such a dork! 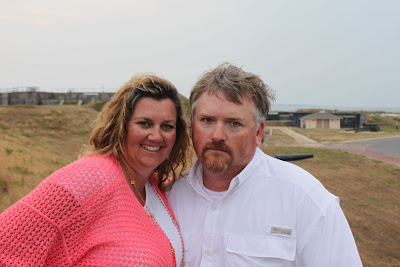 Add Johnnye to the mix, and Todd actually turned it up a knotch. Gee thanks, TG. 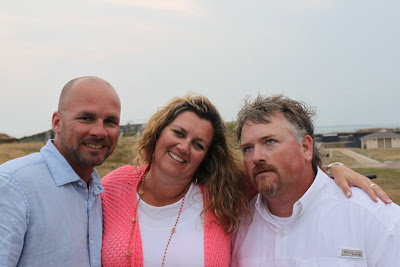 Finally, our trek to the end of Alabama was over. 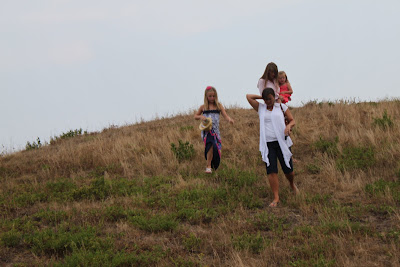 And then, we were off to eat dinner! I'll have pics of that too. You KNOW I will! 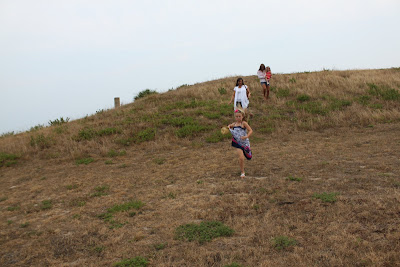 Reaching the last days of our beach posts. Stay tuned!

I have totally done the cactus and sandals...I know how she feels!!!

What a fun group! Be safe.

You are always talking about pictures that need to be blown up and hung....I'm thinking that first picture of Todd needs to be in your office somewhere (maybe not BLOWN UP, but somewhere-it is really good)
Love the pics of Julianne and Peyton~they really are good kids and I hope she was "good help!" She had a GREAT time-hasn't stopped talking about it since she got home! Because I have a big old herd of a family (some of which are not actually relatives) I know what a blessing your Circle of Love is. Thanks for letting my baby be part of it for a week!
J