First things first... to all of you who said, "I just wanna 'BE'", this is for you! I was especially thinking of Jenn P, whose word for 2011 is "BE". See, I think of my bloggers everywhere I go! 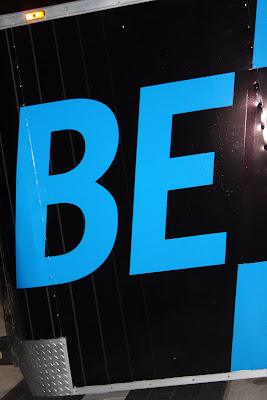 And where I "go" this time, was the Orlando Magic basketball game. This happens to be my very first experience at an NBA game. 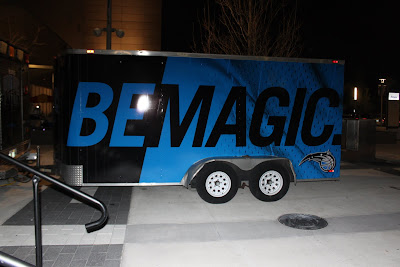 I played basketball in high school, but it was probably my third favorite sport. Softball was always my favorite! Someday I will share some of the stories from my glory days. I did LOVE me some softball. But I digress... 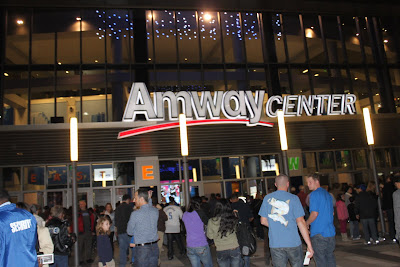 I do not know how it is that Todd and I get so lucky. Seriously, I told him at the game... 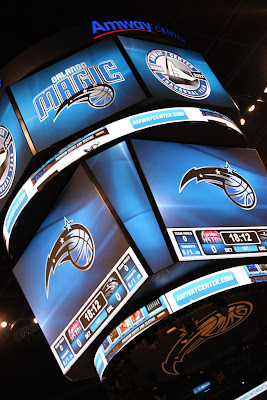 We are so spoiled! How do we get so blessed?! Now understand, I am not bragging. I am just outwardly expressing my gratitude, and kind of even shock and awe, at how good things come my way so often. 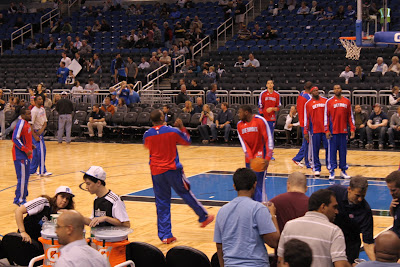 Trust me when I tell you it ain't all a bed of roses, but since I made a conscious decision to focus and divulge the GOOD stuff, it seems that I attract more of it! In fact, and I am WAAAY off course from the point of this blog by now, I read a book this past week on the plane to Tucson. It was a short little book with a parable about a bus driver and a grumpy ol' rider, who needed an attitude adjustment. If you are a leader or a manager, or really just want to start seeing things more positively, I recommend it! It was called The Energy Bus. Ok, back to the game. 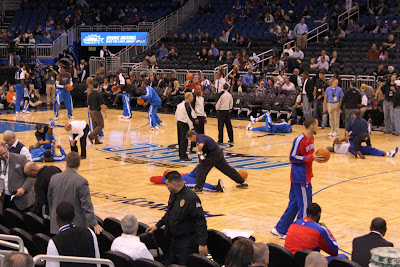 Look at all those PT's on the court stretching the players. I was more jazzed about that than the actual game! 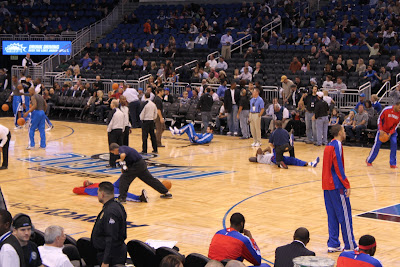 Ok, so regarding all our good luck. Todd's stepdad, Larry, works for a guy who apparently has great seats at the Amway Center. He gave them to Larry to give to us. How cool is that?! 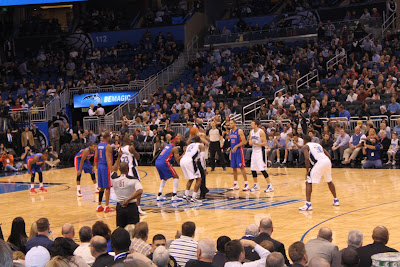 We were on the SEVENTH row, and had the freedom to stroll around on the court floor, behind the players' bench as we wanted. But even better... 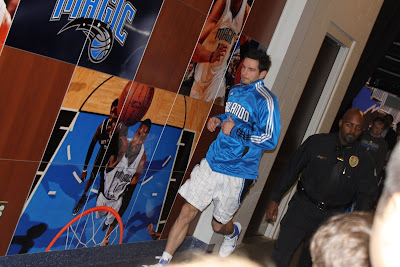 we had the freedom to stroll down to this VIP lounge area, where we could watch the players come in and out of the locker room (while drinking a bloody mary!!).
There's Patrick Ewing! I remember him! Kickin' it old school there! 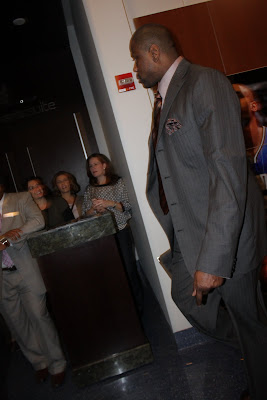 ANd this is the star of the show. This is Dwight Howard. Who out there are basketball fans? Mindy, you still reading?! 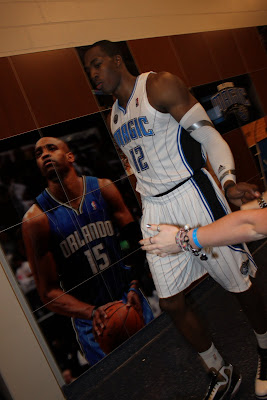 Dwight's "thing" is that he is revered as Superman! All the souvies in the shops had Superman stuff everywhere. I thought about Travis! I also thought about my buddy, Andy. 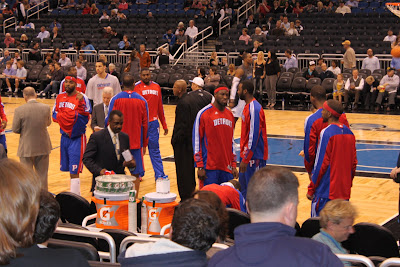 Andy is a young man who I treat (and have for several years) who was injured on the basketball court in a freak accident which slammed his head onto the court (his first love and absolute passion!!) causing a SEVERE brain injury!!
I even called ANdy from the arena TWICE, to tell him and his sitter and his mama all about the experience. I wanted Andy to just hear the crowd. I bought him a cool jersey. Mostly, I just thought about how much he would LOVE to be here. And how totally blessed I am to be here! VIP suite or not! Just to be able to SEE the game, HEAR the game, SIT up on my own accord, and WALK to and from my vehicle. Sometimes, we just forget how awesome we got it! 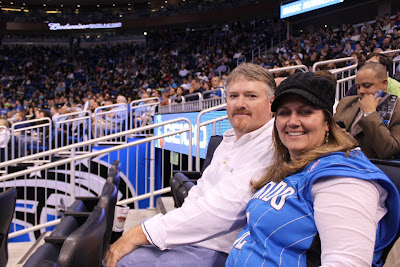 I, for one, have been thinking a lot lately about that. I think about how much I have been travelling and when I think maybe I should slow it down, I then remember guys like ANdy. Would Andy EVER regret any 0f the travel and busy-ness and fun things he did?! I think not. I just think that while we have an able body and the resources to enjoy something, we should! I saw a sticker recently that said, "Don't postpone Joy!". I LOVE that ! Now, if it were interfering with the well being of my children or my family in any way, then that is another thing entirely. But, as long as I am able, I am going to enjoy.
Oh, look hydrocollators!! That is where they keep hot packs to use on the players on the bench. We have one just like that at MMPT!! (Nerd alert!) 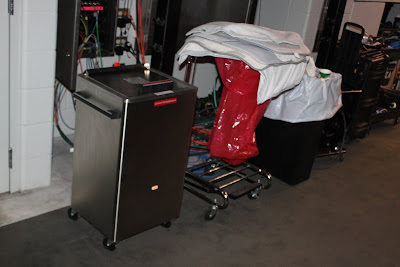 So, was this post a little "there's a bird" and hard to follow?! Sorry if it was! I am posting it from afar! I am at a Kid Rock concert tonight! Hey...
Don't hate the playa. Hate the game!
Don't postpone joy!!
Mo
Posted by melanie, aka Mo at 10:20 PM

go mo go! enjoy everything you get a chance to and remember to blog about it so us homebodies can live vicariously through you!

Well I want to know one thing---how many "feathers" did you see at the Kid Rock concert? LOL I bet you saw all kinds there! I love that you know how blessed you are, and are able to have FUN in every situation!! That's why I enjoy reading your blog so much, you always make me smile, & make me look for the bright side of life!!

Glad you had fun!

Woo Hoooo!!! We can travel MO AIR simply thru your blog! We can surpass the body searches, the luggage check in, the kid kicking the back of our seat, the peanut and coke snacks and even awful sickness all from the comfort of our computer chair!!

*speaking of motion sickness* you blogged a few days ago about your bout w/motion sickness how do you manage to get thru it on the airplane?

I LOVE "don't postpone joy"...maybe I could have a phrase instead of just one word? Just a thought? Love the post....glad y'all had such a great time!!

I know nothing about basketball, but I did enjoy your post. ;-)

Enjoyed your post! It's always wonderful when good things happen to good people! I agree, don't postpone joy! I once read on a very wise person's blog that being happy is a decision, a CHOICE, that we make everyday! I am choosing joy!

I'm glad that you got this great opportunity. How Special!

Wow - what a fabulous time! Last April we were able to get playoff tickets from a friend to take the girls to their first Mavs game. We were 7th row (not counting floor seats) and it was so cool (Troy Aikman and Moose were in our line of sight to the court). Of course now, the girls may expect such wonderful seats at any sporting event.

Can't wait to read all about the Kid Rock concert. And keep the Disney pictures coming!!!