I think I mention this every once in a while, buy JinJIn is the baby of 8 kids! That always makes for a big crowd at holidays! This is Aunt Betty Lou (foreground) and Aunt Mary (background). 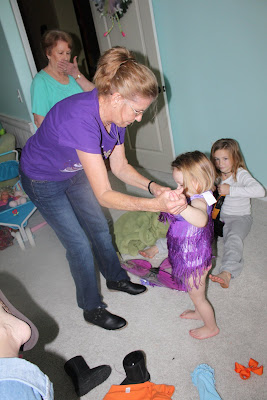 Ellie hadn't been dressed 30 minutes, when Aunt Betty Lou presented her, Maddi and Gabbi with costumes! Talk about a rush! 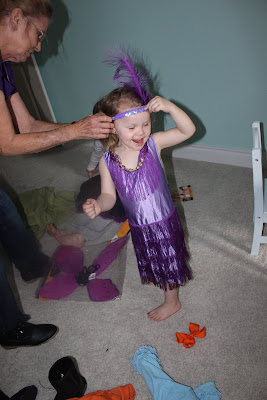 ANd don't you think a single flapper dress is enough. 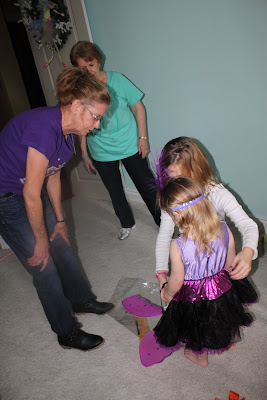 Ellie paired that with a tutu and wings! 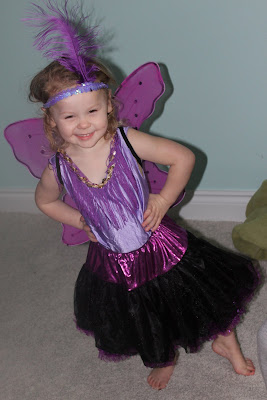 Totally unrelated... how cute are these dishtowels that Breanna made for me to have around at Christmas. Seriously! 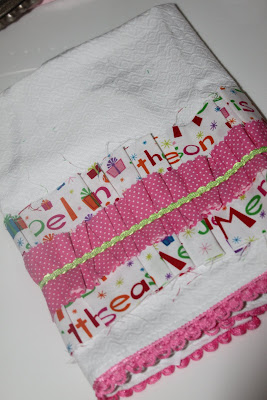 Equally unrelated, how totally awesome is Gabbi's tree? I think it's my favorite! I LOVE the colors, the whimsy, and it suits my baby girl to a tee! 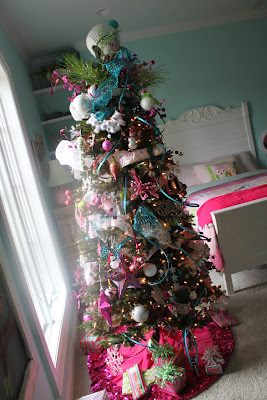 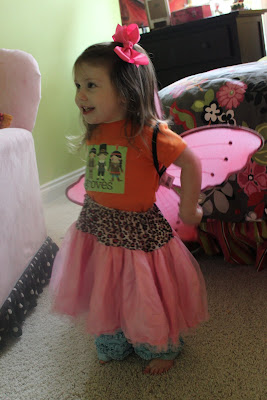 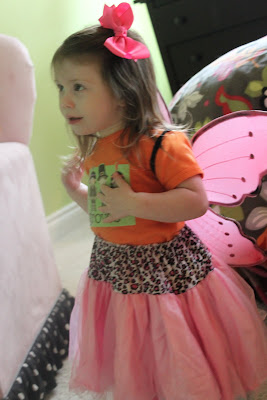 When Dora's on, the world stops revolving! 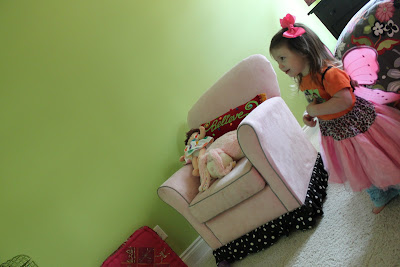 Having a big family means a BIG, big spread! This is the beginning of the dessert area! 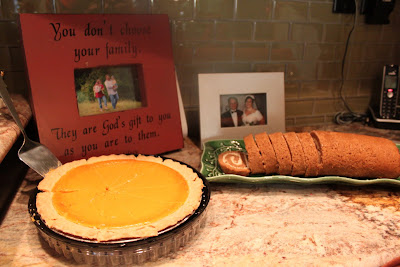 ANd this is the main course area. See that Santa? That's the one Ellie spins around when she is being ugly and says, "He's NOT watching me!!" HEE larious! She can even be ugly when Santa's in the room... She just turns his snooping butt around 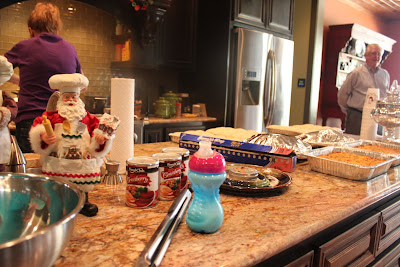 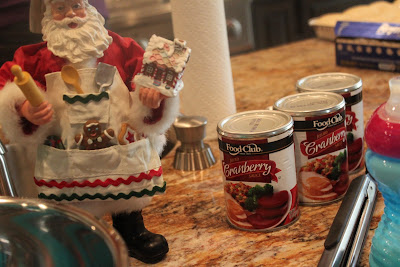 My cousin, Cherry, and my Aunt Bonnie, (in the rear view), both brought me little housewarming goodies! So sweet! 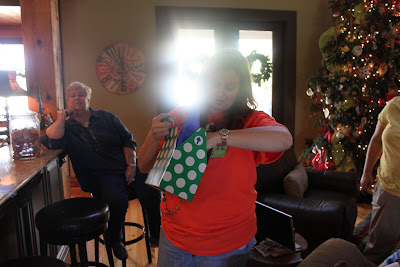 Wait! Are you kidding me, Cherry? An apron?! Unless Todd wants to play naughty chef or something, I don't have any idea what to do with that! Just kidding by the way. We don't play naughty chef! Just seeing if you are paying attention! 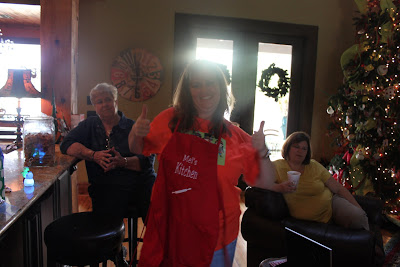 The grand prize winner of the night HAD to be this peanut brittle!! 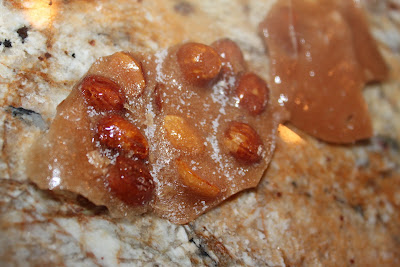 Here's a little glimpse of the Big family tree after decor! 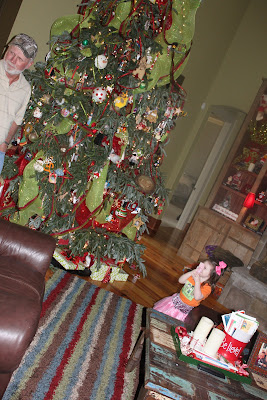 Oh, and Maddi scored the blue wings and skirt. 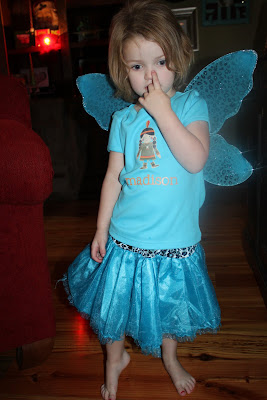 Thanks, Aunt Betty Lou. Aunt Betty Lou had three boys, then oh, ....6 or so grandsons?! I think she gets her jollies from wings and tutus! 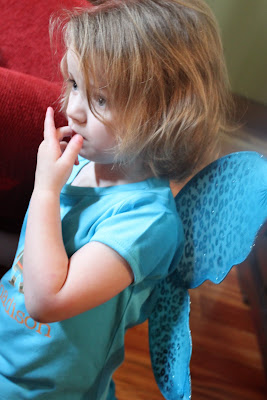 Aunt Betty Lou was always the funniest aunt. The one who sticks carrot sticks in her nose, or peanuts as fake teeth in her upper lip when the camera is aimed at her. 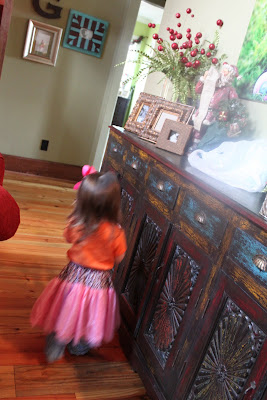 This is our family's newest addition, Jennifer. She married Drew this past summer (you may remember teh rehearsal dinner at Staci's house). Drew is Cherry's only son. 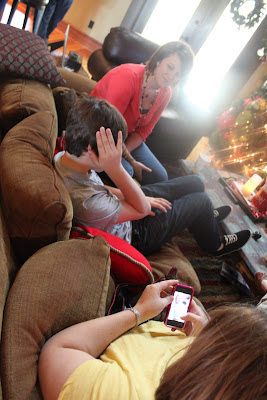 See? Aunt Betty Lou and JinJin. All say Jin was the spoiled baby sister. They picked cotton, while she sipped tea on the front porch. I don't know.... wasnt' there. Just what I heard! 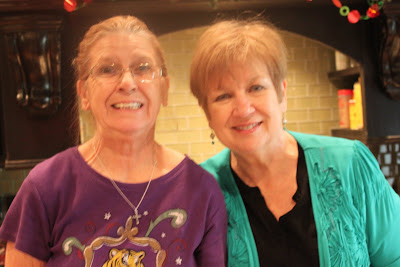 The male folk usually kinda stay out of the way. This is my cousin, Jerry Wayne on the left and Mike on the right. Have you realized we are a southern double name kind of family?! 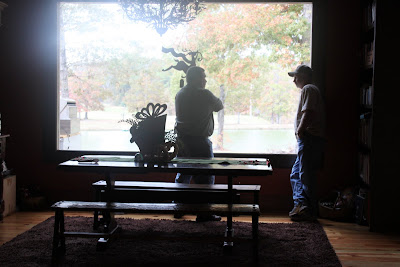 Jerry Wayne's mom, Aunt Barbara, passed away when Jake was at St. Jude. He died shortly thereafter. We think she went to prepare his way and be there to welcome him.
Now you KNOW (or maybe you don't) that Gabbi Girl is a CLINGY baby! I mean, she goes to NOONE! There is the occasional exception. And when she has this "draw" to you, it is powerful! She had such an attraction to Mike, Cherry husband, Drew's dad. 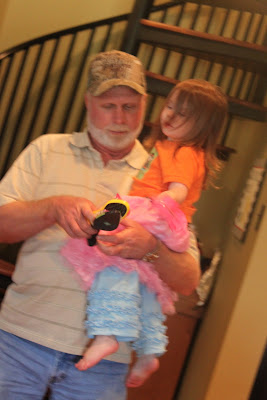 Oh. Did I tell you about the FAB-U-LOUS glitter trees on my mantle? For purpose of scale, they are about 5' tall each!! 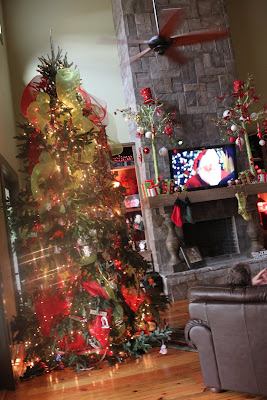 Here we have Hayden, Jenn, Staci, and Hunter. How many cellphones can pack a den?! 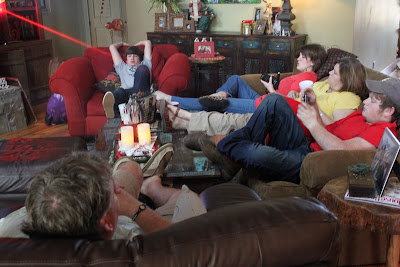 The womenfolk getting ready for the feast! 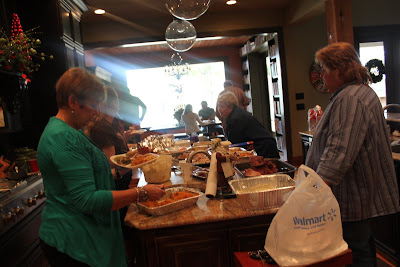 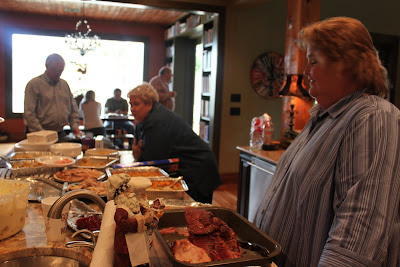 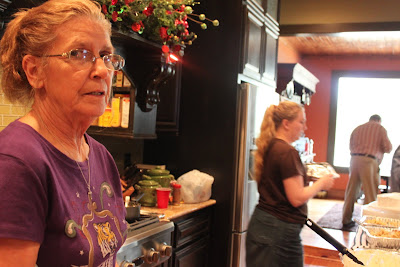 And after the feast, Aunt Barbara's family. Jerry Wayne, Amy and JeriKaye are my cousins, and that's Uncle Jerry. 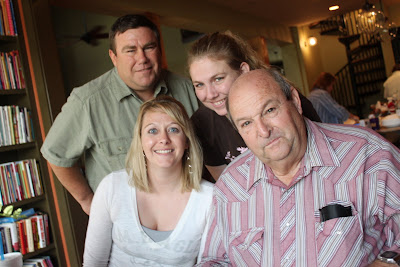 And FINALLY Cousin Drew and Husband Todd left the football game in the mancave long enough to make a plate! 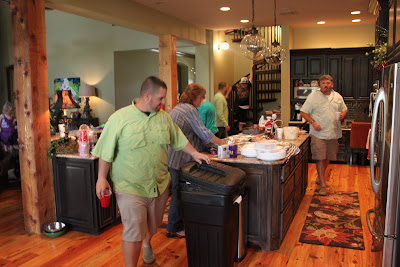 Good times were had by all. Nothing beats family!!
Mo
Posted by melanie, aka Mo at 7:10 AM

Looks like tons of memories were made! I love the BAT!! Don't you think cell phones&texting while with family should be banned? I can't stand when two of my kids are glued to theirs! Technology advancements are great but in so many ways it has lessened interpersonal relationhip.

I want to come to your house!! Seriously! LOVE IT! And all of the fun and love that (seems) to come with it! Thanks for sharing via your blog and pictures. Oh, and just for the record. My husbands' brother's name is Jerry Wayne. Awesome!

Will you PLEASE give us the grand BAH tour? These little glimpses here and there just aren't cutting it for me. I need the home-a-rama tour. Much obliged.

You made me laugh out loud at the naughty chef comment! Nice to "meet" everyone. The girls are so precious. Love Gabbi's tree, I did my tree in those colors this year.

You naughty girl u...did u wear it that night? I'm hurt you did get Aunt Cherry and Ellie drawing...We made some masterpieces...Loved the pic of Mike and Gabbi. and loved seeing the BAH...see ya at Christmas...