I seem to be going a little backward this week, but let's go waaaaay back to last Wednesday when we were all over at Paula and Johnnye's for our annual turkey fry! 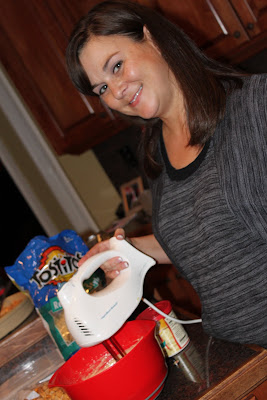 I know you all know Tashia, my CPA friend, but have you "met" her husband, Dakin and her son, Hunter?! 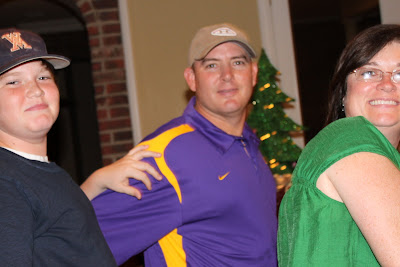 This is where the magic happens. Left to right... Richard, Todd, Dakin, Samuel, Sam, John, and Brandolyn. Hey Brandolyn, it's a BOY thing. Get inside with the pie cooking! 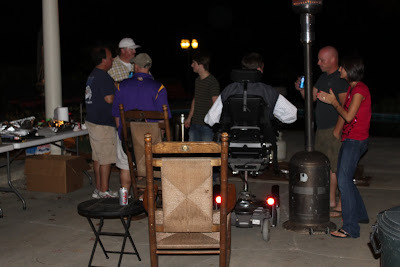 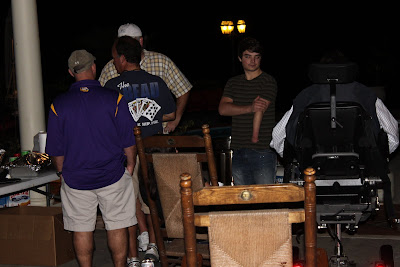 Gabbi Girl didn't start the night in a very good mood. That would basically be because I put her DOWN! That always shocks her! 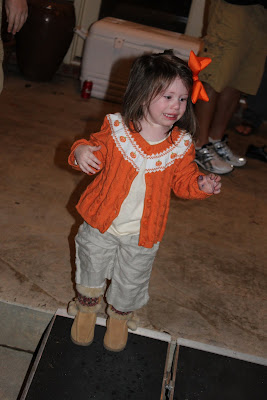 THis is Samuel. He is Linda Lou and Sam's son. Have you started to recognize my friends? Sam is my friend who is in the wheelchair. A year or so before Jake was diagnosed, Sam was playing with his kids in the front yard. He was testing out the possibility of his son going down the hill in the front yard on a Razor scooter. When he approached the end of the hill, he veered into the yard to slow down/ stop. The scooter wheel stuck in the grass and Sam went forward, breaking his neck at C5-6 and paralyzing him from the neck down. I know you see him in the pics around our house, and now you know the rest of the story. He has an incredibly strong family, Johnnye is Linda Lou's brother and Sam's bro-in-law, making Paula a sis in law. Their story is similar to ours, in that while Sam was in rehab, Paula was able to take and keep their two young sons and haul them back and forth from Jackson, MS, to West Monroe thus keeping the family together as much as possible during its darkest hour. Miss Linda and Mr. Joe, whose house we go to sometimes on Sunday nights, and who is Ellie Sue's dance teacher, are Sam's in-laws and incredibly supportive and helpful. Ok, got all that?! 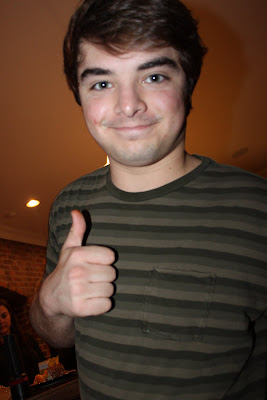 MOving on.... Ana. After all that, I just dont' have much to say about ol' Ana. She was my girls' first babysitter. She is Paula's main babysitter for years, and she babysits for Chuck Finley, who is also from West Monroe and a retired pitcher for the California Angels. (Is that right?!) 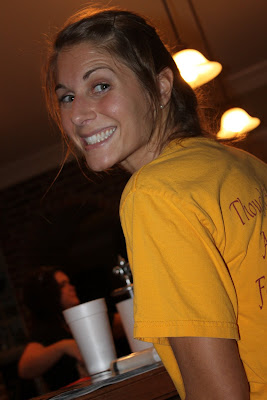 The boys of the night were all into this XBOx or whatever game of competitive dancing. 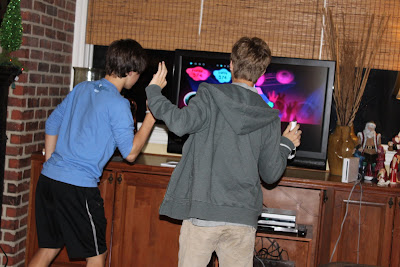 It was kinda hysterical watching them in this dance off. Oh... and that is Ford to the right... 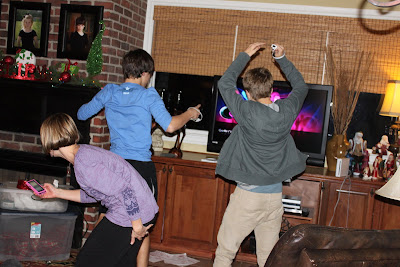 Sam and Linda Lou's youngest son. And Clayton, Paula and Johnnye's middle son to the left. 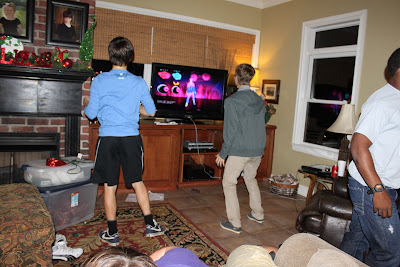 This is fat Bo. 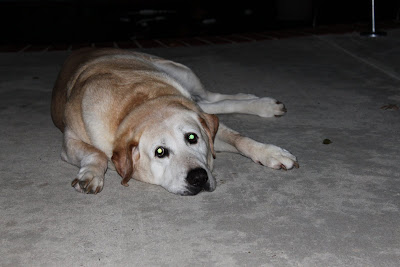 And this is the reason for the congregation at the Fords. 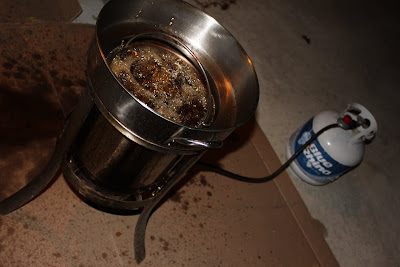 We heard turkey was kinda healthy, so we said, "awww, hellll nawww!" and fried ours right up!! 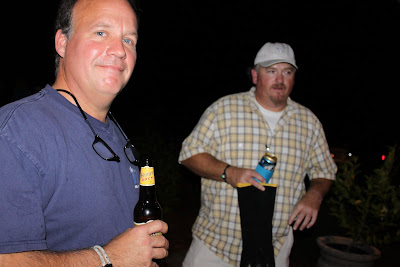 And then Gabbi found the "baby puppies". 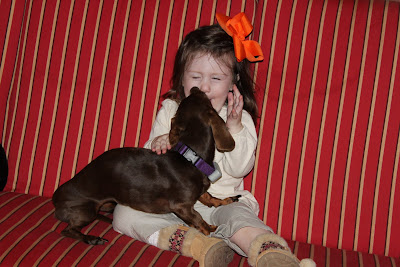 And clingy baby turned into baby who wouldn't come to me at all! She had cound her soul mate! 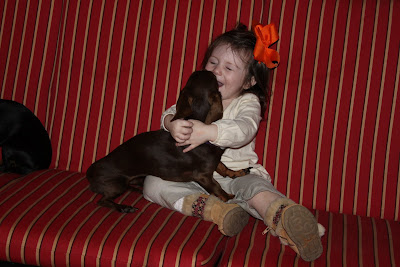 I swear, the kid NEEDS a miniature dachsund. But her daddy says NO WAY!! 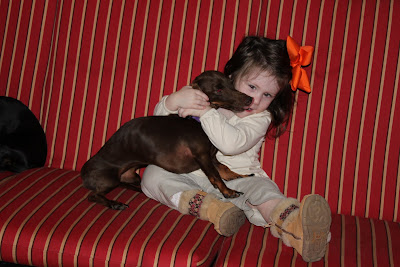 And here is her friend and fellow dog lover, Jansen. 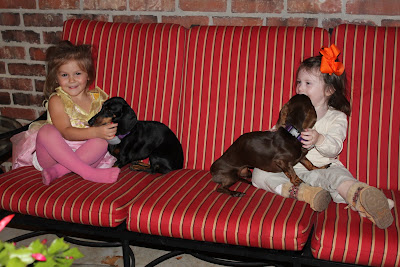 My baby is never so happy as when she is holding a dog! 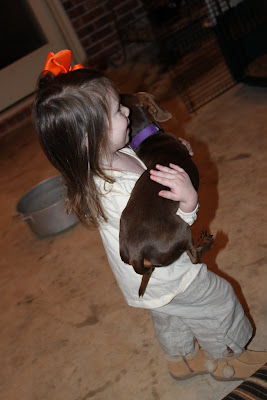 I kinda feel sorry for the poor dogs, though. They actually don't seem to mind! 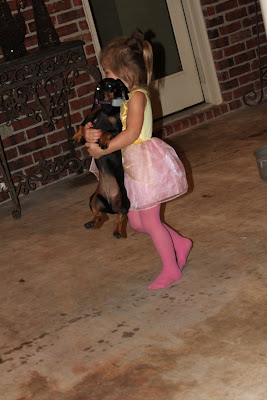 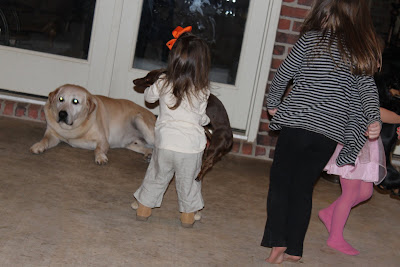 Little girls and puppies... what could be sweeter?! 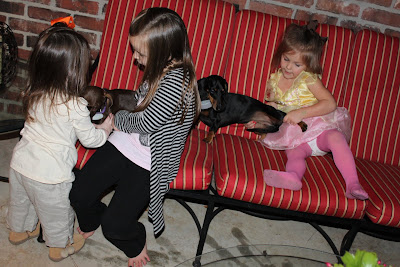 We won't fry turkeys again for another year! Looking forward to it already!
Mo

Hi Mo ~ I just LOVE seeing Gabbi with those dogs.....what a little doll she is! She is going to make a great Mother with all that love she has (and she learned it from you & Todd) how great is that?
I have never had a fried turkey, but I heard that they were really good - we have to try it someday.
Have a wonderful Thursday,
Diana from Colorado

Oh yeah, Jamette. We DID fry up those ducks! And they were da' bomb!! thanks.

Laughing at the girls with the dogs!! Those poor dogs do seem to be loving every leg tug, tight belly hugs and all!! My girl would be right there in the mix w/them! That kid loves dogs to a fault!! I have to remind her "all dogs are not friendly"!! She wants to run up and hug everyone she sees!!

So far as the fried turkey!! It is delicious!!!!

Have you tried the Turducken?

Looks like another fun night with friends!! Gabby is so precious with the doggies.I guess Ellie was too busy with the big girls to get her pic taken.

We have two of the wiener dogs...they are great for children! Ours are 17 and 15 and still tolerate our 5 year old pretty good!