Let's get ready to rummmmblllle! 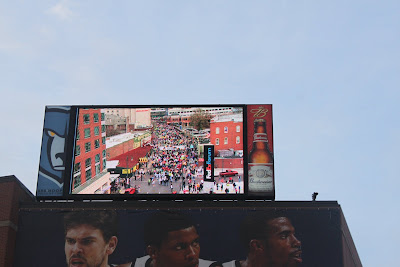 And they're off! All kinds... elves, big kids, mamas, daddies, little kids, babies in strollers, those dressed up, those dressed down... all kinds! It is the 2010 5K! 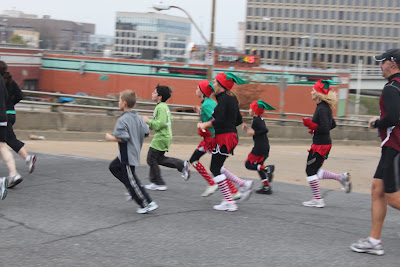 ANd heeeeere's SHannon. She'll be back! And I have a feeling she'll be doing the 1/2 next year! 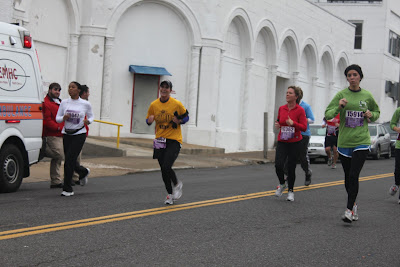 ANd this is Johnny Knoxville. 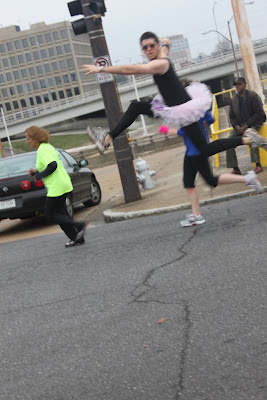 No,it's really not. But DANG, it sure looks like him! And I wish I knew him so I could give him this picture. I caught it at EXACTLY the right time!
There's Corbin! He ran the 5k with his mom, there, in the background. 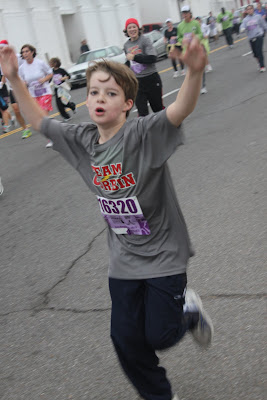 We were at Corbin's No Mo Chemo party! He was at the Jude when we were. He had rhabdomyosarcoma. I think! 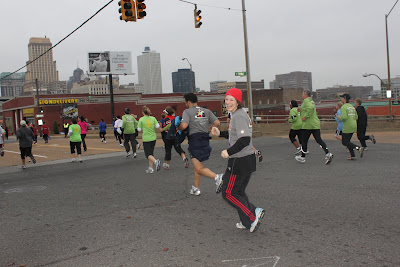 And there's Todd. Or at least in my book! 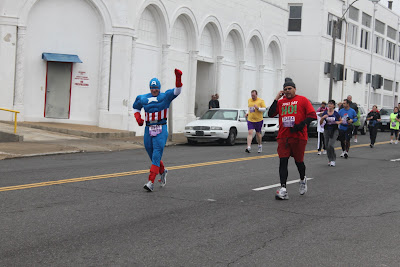 Gary is such an awesome little guy! He could've finished that 5k in a much quicker time, but hung back to run with Joey's kid. Joey was in the 1/2 marathon with his daughter. 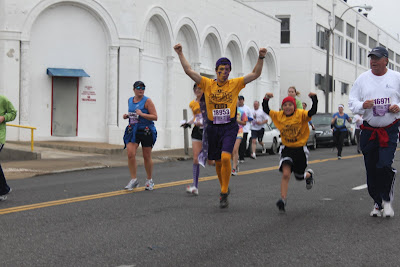 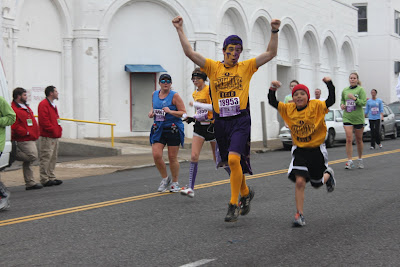 So fast she's a blur! 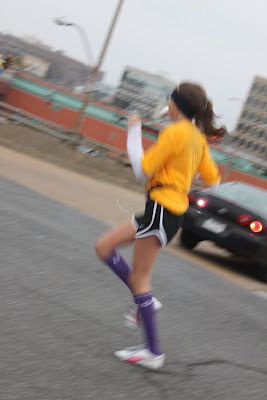 And heeeeere's Todd. Pierce that is. Angel Shae's dad. They were our source of strength when we were at St. Jude. Way to go T-Man. 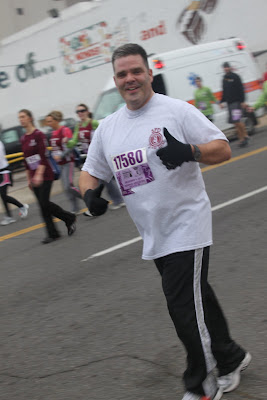 Come on, Crystal. Finish line is straight ahead! Thanks for coming year after year! 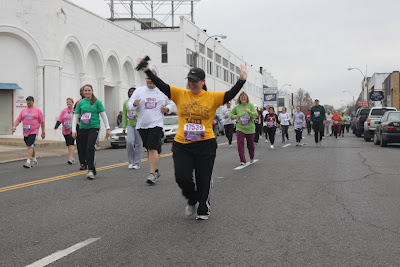 ANd here are BritanyAnn and the munchkins! 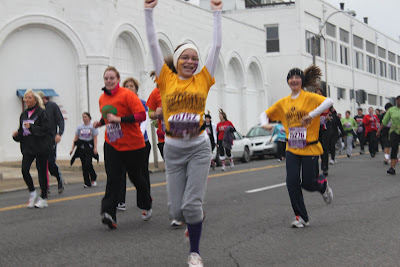 A bit enthusiastic for mile 2.5, but finishing strong! 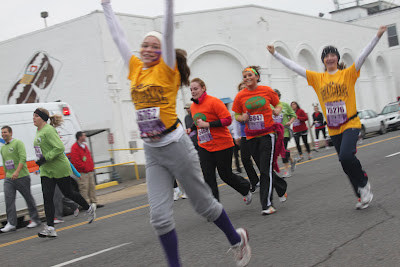 And Kim, your girls did just fine all on their own! 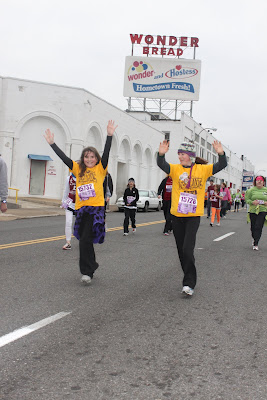 Lori Ann, I think if I was you, I'd have this blown up and framed. How cool is it that your parents did this together, and with this much excitement and enthusiasm?! 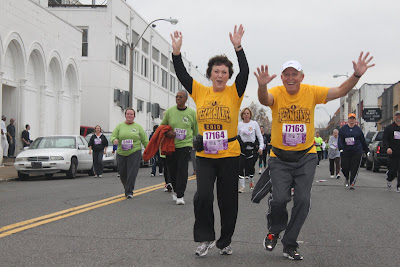 They ran it in from here!
And this poor dude did the 5k on crutches. I am a soooorrrrry sap! I have two perfectly GOOD legs! 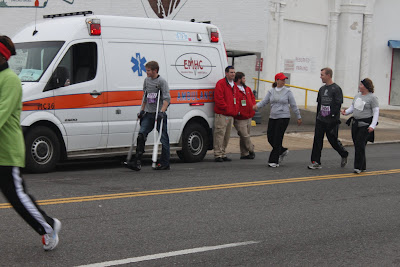 And I am perfectly capable of wearing green hair and tutus! 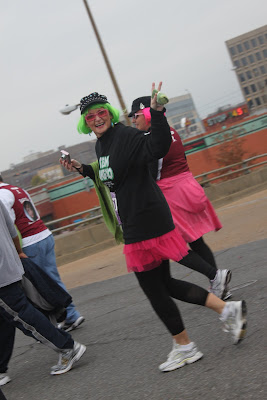 Our Homer crew always brings the teens and the teens seem to be multiplying. Not literally. (We're southern but not crazy!) They also help us the night before with all the sign distribution. They just don't know what a load off it is to have help like that! 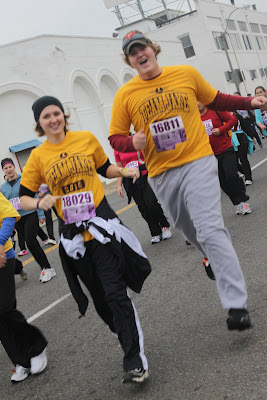 And this is Angel Hanna's mom. Not cool to have all these angel moms here. Or maybe it is?! I just wish these kids were still with us is the point! Too many die young! 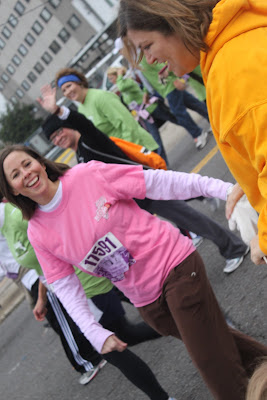 And there's a former TEAMJAKEr who ran for a kid from her hometown. That's cool though. As long as the money is pouring into St. Jude for a cure for stinkin' cancer! 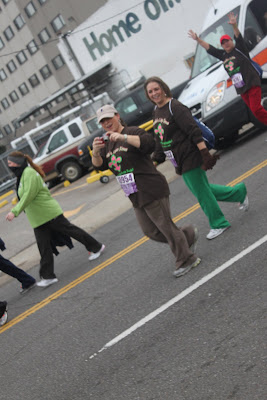 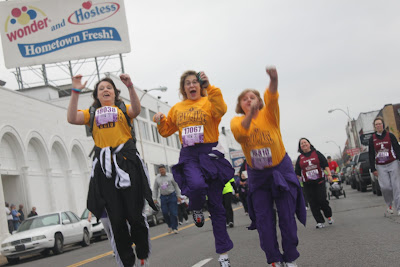 ANd lo and behold if Charlene, far right, didn't come down and twist her knee/ ankle!!
I mean it was just a simple little jump! Here, I think she's pointing to the crowd, like they do in football games, saying, "It's ok, I'm up. I think I can make it!" 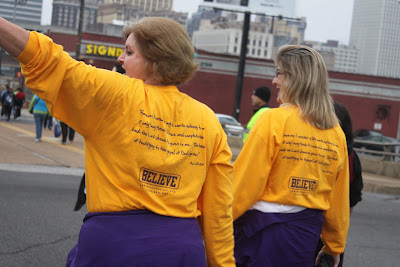 ANd make it they did. All three of those nuts who run EVERY year.... Charlene, Kim, and Melissa! 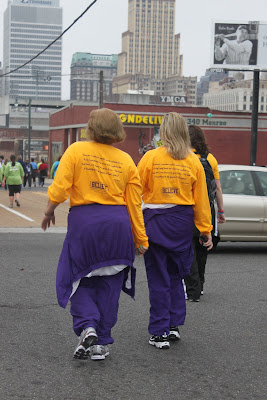 Staci had reunions with moms right and left! 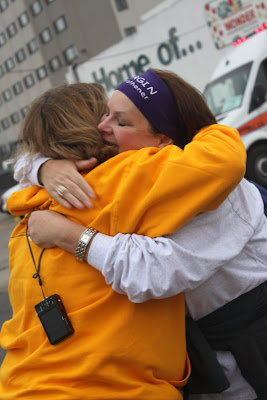 Almost all had lost their children!
This was a "slow" year for Monica. She did the 1/2 last year and decided on the 5K this year. Her hubby, Travis, did the 1/2 again! Thanks for participating again, Monica! 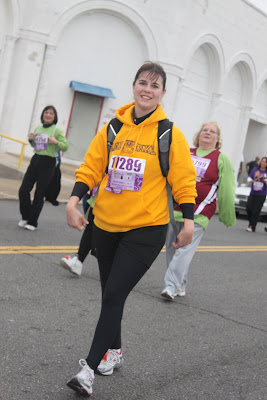 Well would you look at this good looking bunch?! I am so proud of Shelbi Mae for this THREE MILER!! Way to go, girl! I love you! 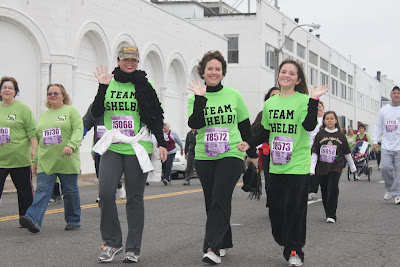 And you too, Emily! I am so proud of your resolve as her mama! You are a tough cookie, raising a tough cookie! It's good for our female domination of the world! Ha. Really, you are doing GREAT! 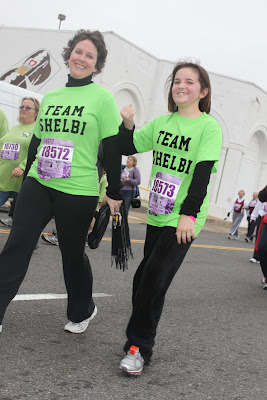 And that concludes our 5K 2010. See ya tomorrow for 1/2 and full marathoners. Be ready. It's a long one! Take the laptop to the potty with you or settle in with a bowl of cereal!
Mo
Posted by melanie, aka Mo at 12:15 AM

Fantastic job everyone!
Although I wish there wasn't a need, I'm honored to support St. Jude so some day there isn't a need!!

Oh my, Corbin is so big!!!! Thanks for sharing all your pics.

Amazing! I love to see these pictures. I also wish we didn't have Angel's Moms. I agree with Amy K - I also support St Jude so that some day there just won't be a need!!!

Is that the SAME Corbin I have seen on the St Jude segments? The Corbin they did a story on was about 3 or 4 at the time. It sure looks like him!!

What an awesome group of participants!

Hey Melanie, I am the one hugging Staci in the gray shirt. My son Hunter is a SJ survivor and he ran the 5k for the 1st time. I ran into yall several times during Jake's treatment. I am from Eunice, LA and know Toni Guillory very well. This event is definitely something we will be doing every year...the support is unbelievable. I love your blog and have watched your lil family grow !!

Melanie that was awesome! So great to see the pic of Shelbi and Emily cause I never got to see them over the wkend. Love the pic you got of Corbin...thx so much!