I gotta tell ya. We had it goin on with the Easter parties! Madison, Don's nephew, and Eddie and Marina's son, agreed to don the suit, not only for my MMPT Easter hunt, but for Maddi's party too. 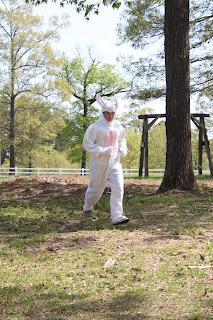 The big kids got right into the swing of things, chasing him with Silly String. 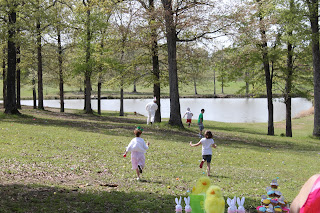 This is the Easter Bunny with his mama. Thank you, Marina, for raising such a fine boy. (I just can't say "man".) Not many college guys would be willing to dress up in a bunny suit (twice!) and then encompass the role with such ZEAL!! 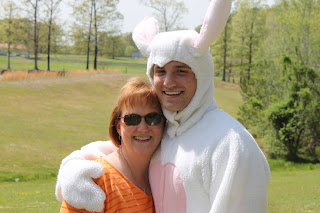 Gabbi loves the Easter bunny. Have I mentioned that? Well, just you wait. You are going to hear a whole lot more about that! 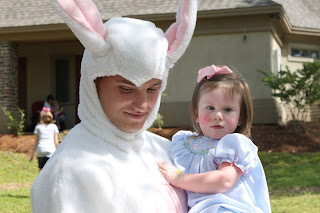 Madison and Madeline thought he was pretty cool too. 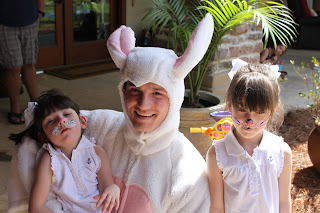 I know I have mentioned it, but it is soooo worth saying again. Ok, how many of you actually KNOW my Gabbi? If you do, you will realize that what I am saying is BIG. Really BIG! She LOVED that rabbit. L-O-V-E-D him! 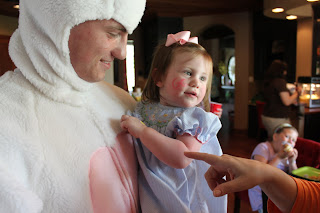 Gabbi is a mama's girl. And I mean almost pathologically!

Some of you know what I mean when you have one of those babies who would just as soon be back in your womb (no one has told her yet!) than out living amongst the peeps. Well, that is Gabbi! 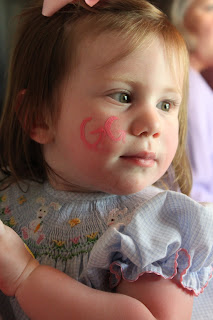 If I am anywhere in the vicinity, and she sees me, it is a beeline to mama! And that is where she plants and stays! She won't even go to daddy. And.... if any of you have a child like this, you know that sometimes it is quite beneficial for daddy to just say, "Well, she doesn't want me", when you are begging him to take her for a minute, so you can, ohhhhh, I don't know... wipe?! 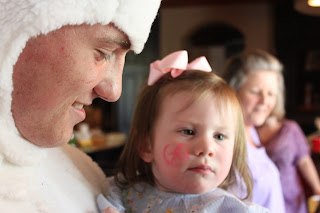 Well, when she was with the Easter Bunny, she had NOTHING to do with MAMA! She would actually shun me and tell me "no" when I tried to give HIM a break! It was a miracle! I do not know what it was about him... had to be the suit!
But, just know. I am having one of these made in Todd's size! 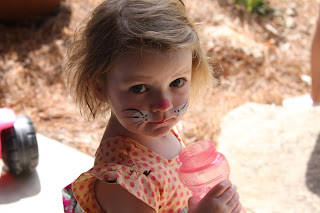 And here is our little hostess. Maddi Boo had been talking about "my party". When I ask her what kind of party, she would say, "My Easter Party."
My Gabbi Girl. So precious. 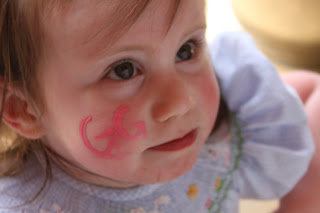 I guess Ellie Sue was taking care of her baby sister. She had both of their baskets, toting them around all proud-like. 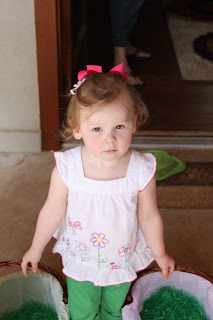 As usual, there was a good turnout at the party. This is the starting gate! We had activities for them to do prior to the big, "GO!!". Because there were kids of all ages, we asked the big ones to run all the way down to the bottom of the hill so the babies could find the eggs near the house. 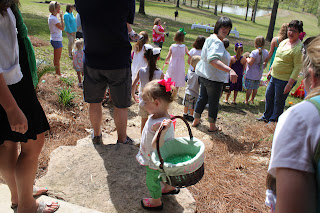 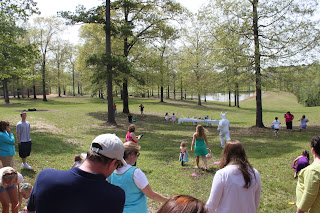 Madeline stopped to admire the decorations and the goodies that were prizes for the prize eggs. 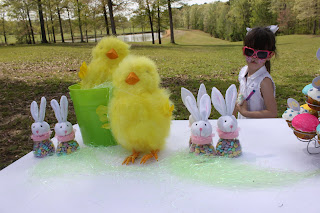 And thanks to you who complimented my bunny face painting. Jessi began the trend at the MMPT parties. She was the main bunny face painter, and I just rode her coattails. For some reason, Ellie didnt' want to partake in the face painting on Round 2 of the egg hunts. She wore hers proudly at the MMPT hunt though. Pics from that are pending. Or... if you know h0w, you can join the Melanie Massey Physical Therapy fan page on Facebook and see some of the pics (not mine) already! 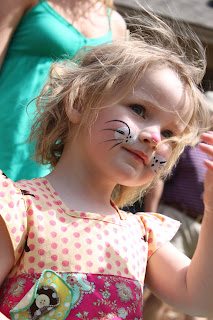 Good Ol Uncle Eddie. Always there to help a sista out when she needs a lift on the slide. Gabbi could climb up the slide, but she headed down face first every single attempt. Not that she minded! But, we all preferred to not see her faceplant! Thanks for being the back up adult for Gabbi's fun, Uncle E. 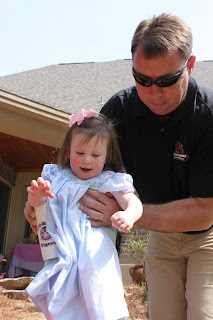 By day's end, you can imagine, the babies were whipped! And they had to go to beddy bye because the Easter Bunny was on his way! And this was going to be a big night. He was taking all the bottles in our house and giving them to his baby bunnies. We don't need them anymore. 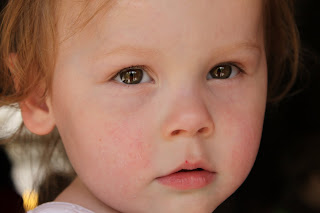 Uh-Oh let us know how the NO bottles thing rolls! LOL Love the pics! You and your family/friends are da Bomb!

LOVE that the Easter Bunny is getting the bottles. Our goat got ours when our oldest was little. She was mad at the goat for a few days but forgot all about bottles after that.

I sure have enjoyed seeing all these Easter pics! Going to become a fan of MMPT on FB now.

After looking at FB, just had to come back and say, y'all have the BEST time at MMPT. I wanna become a PT or PTA or something and move to LA! =) I'm such a sucker for cute T-shirts, and y'all always have such cute ones. There's a beee-yoo-tiful picture of you and GG over there, too. Thanks for sharing your sweet family us - your blog always brings a huge smile to my face.

Gonna join you all on Face Book so I can see the pictures. Love the new ones you posted. My little granddaughter, Sofia, is one of those like your little Gabbie...loves the Mama...always wants on her hip and she is gonna be 3. When Mama isn't around, totally different little girl!

Great photos!! Glad y'all had a wonderful Easter.
And as for the Easter bunny taking all the bottles.... he also took the soothers from our house many moons ago. It's amazing how the kids NEVER COMPLAINED when I explained that the little bunnies must have needed them.
{{{hugs}}}

I totally know what you mean about having a 'velcro baby'. Audrey wouldn't get off my hip all weekend. The only plus was that I got out of having to help with kitchen clean-up. So crazy that GG was loving the Easter Bunny so much and I want to see pic when you get Todd into one of those :) Good luck with the girls giving up their bottles. Happy Easter, Mo and family :)

Love the photos...your gatherings never cease to amaze me...
I'm guessing Todd's totally on board for the whole bunny suit thing! ;)
What a big event with the bottles. I hope you had great success with that.

Oh this post made me laugh out loud so HARD, I just had to tell you. I also have a cling on child who's 19 months old. Everything you said I could relate too. The part about "wiping" and making Todd a bunny suit in his size....TOO FUNNY! So from one mom to another...I feel ya!

Good luck on the no bottles thing!

Lord have mercy. How is it going with the no-bottle thing? I am so proud of you!

Love to read your blog. Can't wait to see Todd in the bunny suit.

Mo this was one of the funniest post yet!! I had two of my grandsons for spring break and the youngest was a CLINGER! I could NOT MOVE w/o him screaming! It had come to a point, that when he was asleep, I would slowly slither out of the bed and do an army crawl just to get out of the room!!! When I told my son and his wife about my new "bed exit" they laughed and said...yeah we do that as well!! TOO FUNNY!!!

Had to catch up on the posts but I'm in hog heaven with all those pictures! Those three girls are just precious. Love Gabbi's affair with the Easter Bunny! Go Gabbi! I'm not sure Ellie is going for the bunnies getting all the bottles. Can't wait to hear how that goes. Thanks for all the pics and a taste of Easter with the Groves.

Can't wait to hear how no bottles is going. Don't let them win!

How'd it go without the bottles? I know someone else who did that and it worked out great! The egg hunt looked like a lot of fun. I'll be in Louisiana from April 14-18 (New Orleans), my first time to that part of the country, I can't wait!!

LOL had to laugh about Gabbi and the Easter Bunny. I have one of 'those' too. At a year old Brendan loved Paws, the Detroit Tigers mascot. He got upset when he couldn't take him home with us. The weird thing was at 18 months he was afraid of Santa. That didn't last long. He's now the 'Santa' (or Easter Buuny, Paws, General Rally..) Stalker!

The girls are so adoreable! I kind of miss not being able to get cute girly clothes.