Get ready. This may be the most random post ever!

Still no computer (and thanks for all the well- wishes. It is not as bad as I man have made it sound. (or so I think!) Breanna, I DO have Time Machine AND I HAVE backed up my pics on another external harddrive in the past, so the older pics (and the ones that I tried to back up recently and think I may have lost) may also very well be on that other harddrive back up dealio. The more recent ones that I don't have backed up were not the ones I was jacking with, so they are still on my computer. Either way, I am aggravated at the whole situation...

Back to random land:
Normally, I would post this last and say, "and all the fun of the day left Staci and Gabbi drained!" or something catchy like that. However, since I just drug these off Staci's computer the other night in no particular order, let me just narrate each picture with no particular story as a whole. Capiche?! 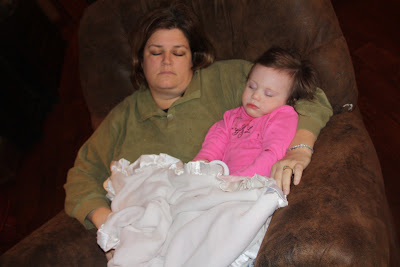 These pics were actually from a day that we were at the Raborn household for a football game... Saints vs. the Cowboys to be exact.

For some reason, Don always jumps into Todd's pics to be dumb and to make Todd mad. He likes to either hug him or act like he is doing something all best friendy behind his back. 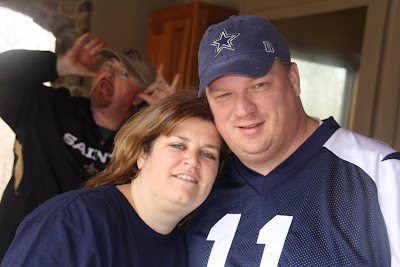 So, I am just going to have to say these are a few pay back pictures! 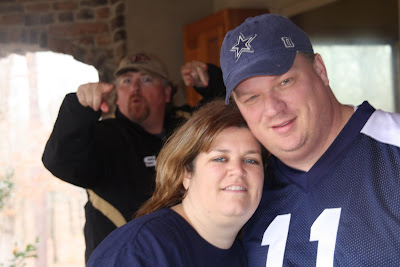 And they are just smiling and are oblivious to the scene going on behind their pretty little heads! 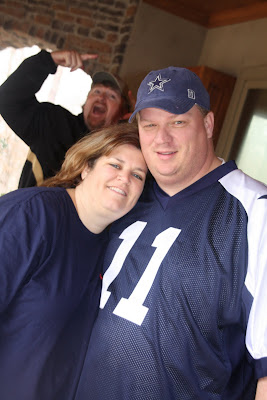 I got a hold of Maddi's hair and got some cute little ponytails. I thought they were so cute on her. Maddi, not being a fan of anything in her hair, took them out in about 2 minutes, but they were cute while they lasted. Gabbi Girl thought she was big stuff playing on the little trike like E and M. 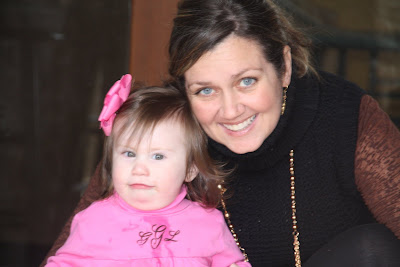 And at some point in just about every week, Ellie is going to konk herself in the head, in the very same, exact, precise spot that she had stitches on her forehead back in 2008. Always the same spot. It actually sticks out now, and I am talking about her skull! So, I assume because it is the part that sticks out the most, it is the point to which first contact is made anytime she falls into something... wall, toys, floor, etc. The child is all over the place, so she is constantly knocking something! 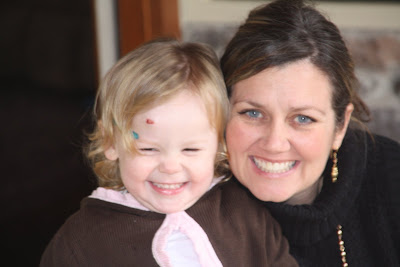 Ok, so this is funny. And can you believe I don't have THESE pics on my own camera/ computer?! Ellie's first attempt at skating! (Please note backward headband on the back of her head. She's a nut.) 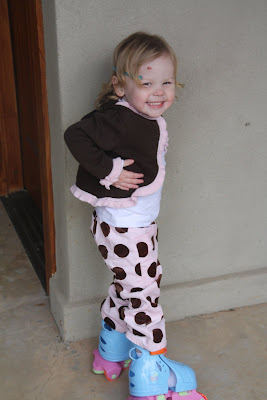 Ellie and Dad did a little couples skating. 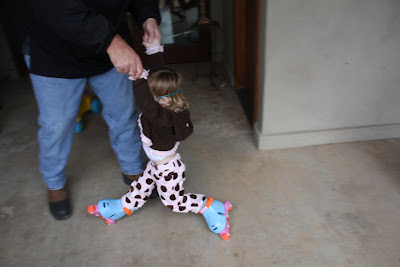 And then Miss Ellie went her way.... 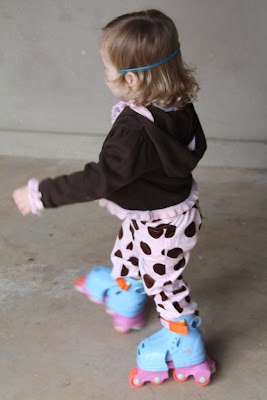 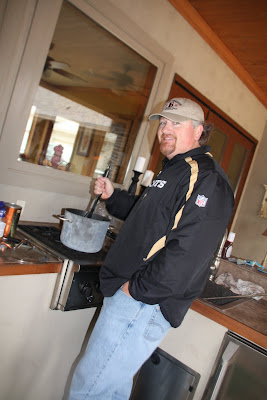 The back porch of Staci and Don's house is just a favorite play area for these two. I am hoping that all three of them get a big charge out of the screened porch of our new house.... you know, the one we may never get into! (Looking like mid summer!) 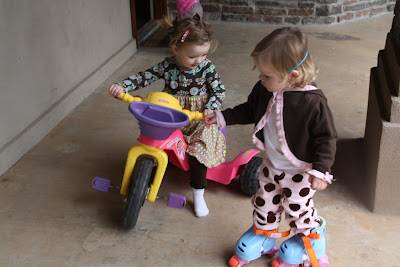 And by the way... remember, I told you, "random", have I introduced you to my cowboy boots!? 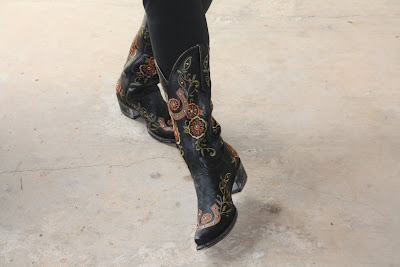 When I saw these boots, they HAD to come live with me!
I have a "bucket list" of things to do before I die, and believe it or not, owning a pair of one of a kind, custom cowboy boots was on my list! So, CHECK!
Oh, and like that... another posing picture of my little budding Olympian. Why don't they have roller skating as an Olympic sport? Just sayin!
Is it harder or considered far easier than ice skating!? 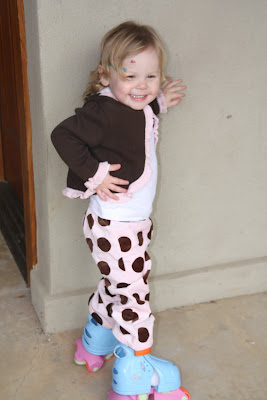 If there is one thing you can say about these girls, it is that they have a GOOD time together! 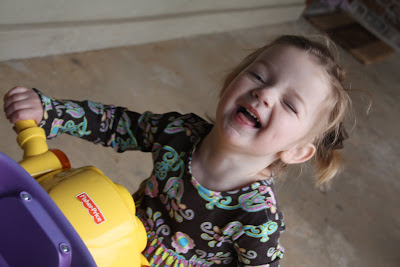 I mean happy as a bunch of monkeys! 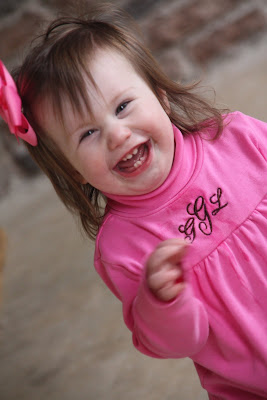 I am dating these pics by Gabbi's teeth! These pics must have been Jan/ Februaryish!
And normally I am not all about the full length shot, but on this day (actually after church), I was wanting to show off my BOOTS! Not my bod! 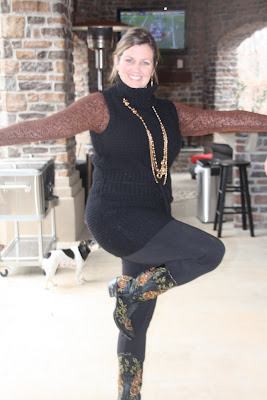 Which, by the way, is growing by the day!
I had my lapband loosened about three weeks ago and have gained about 9 or so pounds since then. It take ssooooooo long to come off, and sooooooo quick to get back on! I was sick too much and acid reflux had become a BIG issue, to the point of sitting directly up at night and still waking up choking. So, it had to be loosened. Now, I need to have it tightened a little, because, well, I have no control, and swimsuit season is upon us!
How's that for random? New boots, Todd cooking, Ellie Skating, Gabbi's tooth count, Staci and Don couple pictures, lapband info, computer storage report, Olympic sports, and..... oh yeah, Maddi's pigtails.
But, never fear, I have been a picture taking fool, and if things don't get better soon, I am just going to get a new puter. Enough is enough!
Thanks for reading about me and my crazy life.
Mo
WEAR GREEN!!
Posted by melanie, aka Mo at 4:00 AM

Nice pics Mo & Staci! I especially like the ones of you with each of your girls Mo.
Random posts work too...sorry to ask since you're having computer problems, but do you happen to have a question of the week for us??
Happy St. Patty's Day!

If Mo doesn't have a picture of it, then it didn't happen!! I love watching those 3 silly girls grow up through your blog. Thanks again for sharing! Happy St.Patrick's Day, can't wait to see the girls in green!!

You keep us coming back for more and more. Love lurking.

Love your boots!!!!!
Thanks for the random fix!
Happy St. Patty's Day!

Totally get the boots thing....i saw a pair of PINK SUEDE boots and i HAD to have them! i would wear them everyday!

I enjoyed the random photos...those girls are too much! I think you might just need to buy Ellie a helmet with a facemask. She's going to keep you even busier as she gets older! lol

Maddi's pigtails are so cute...it's a shame she doesn't like anything in her hair. And Gabbi...well, that grin of hers always brigthens my day.

Love the picture of Ellie roller skating. Her little legs just in the split position. Reminds me of when I was little and did the same exact thing! Great pictures!

loving the pics;especially Todd in the backround

Random is a good thing. Keeps us guessing what's coming next. Loving the boots...they rock. Yep, I'm wearing green; wouldn't want to get pinched.
I feel your pain about not getting in your house until mid summer. It seems that it never happens when "they" say it will. Patience my dear. It will be worth it, but it's so hard waiting. Peace out!!

I love the random post - cute pics of all of you!!

OMG ~ those boots FREAKIN' ROCK!!!! I have 2 pair of brown boots, and have been looking for just the right black pair and those are amazing!! Happy for you they are one of a kind simply amazing....sad for me!! lol... You by the way look fantastic too ~ you did work hard to look that good, but don't sweat the small stuff Mo...a few pounds but you still look great!!!!

Lovin' the random!! Get ALL the updates in one!!!

LOVE, LOVE, LOVE those boots!!! And your great looking figure! You look awesome.
And I'm thoroughly enjoying these random pics. Who knew Todd had such a great sense of humour?! He's usually so quiet. :)
hugs, xo

Love the random photos. We need a BAH update soon.

Awesome pictures! I love the randomness!

Love those boots and those cute little girls!!!

You continue to look great. I hope I do as good as you have done. That acid reflux thing kind of scares me!! And....the vomiting if I eat too much. April 1st is my date.

I read your posts as soon as I get to work, seems like I have to have a little Mo' Joy before I can even start working on anything. Makes my morning seem almost complete (not having to be at work would make it complete, but you got to do what you got to do!). Thanks for sharing your family with me, love how the girls are growing up, only they need to slow down a little or before you know it they will be checking out the boys like mine are, guess that is part of it, dang it!

Actually Tara Lipinski (Gold Medalist Figure Skater) started out as a roller skating champion and switched to ice skating! Looks like a lot of fun at Stacey's house too!! The girls are so lucky to all have eachother!!

MO... did I miss question 11 somewhere along the way?? I can't seem to find it.
Hugs, Denise

Those are some AMAZING boots! And some pretty amazing girlies too... :) I just can't believe how much they've all grown.

I hope you get your computer fixed soon - I know how frustrating that is! My hubby is a computer geek-type person and though it might take some time and a little fund-age, a professional geek should hopefully be able to retreive your pics.

Thanks for the "random" post... it suits my day today!