Ok, so here is the story.  Last night, Veronicia and I were cleaning up from a beading party.  (More on that at a later date).  Anyhoo.... Staci and Don have a stereo system in their new house that plays in speakers all over the house, and there are little control stations in numerous rooms.  Well, Don hears a Belinda Carlisle (his fave!!) song come on and turns it up.
He has always embraced his feminine side.  Then, someone yells at me to grab my camera,
because Johnnye and Gabbi are slow dancing in the kitchen. 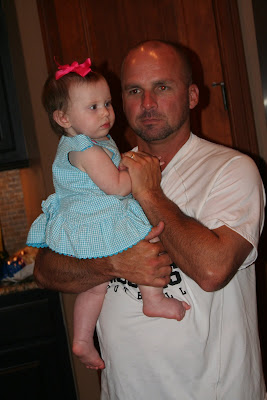 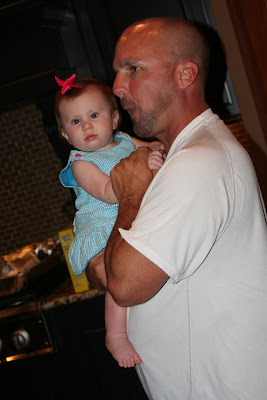 I think the next song that came on was by Michael Jackson.  So, naturally, we all get into that conversation!  Of course, Don being the music afficianado (sp?) that he is, he cranks up his iPod to all the Michael Jackson songs.
Even Gabbi liked the change of tempo! 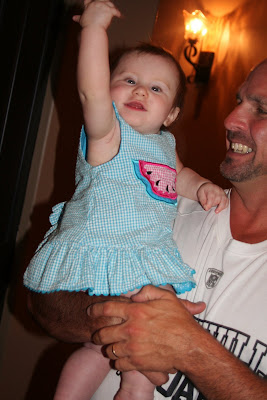 Rock it, girl.  Throw that arm up in the air.  And wave it like you just don't care! 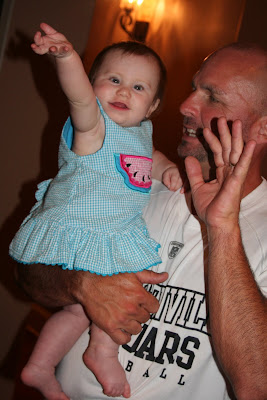 and then it kinda went a whole new direction entirely! 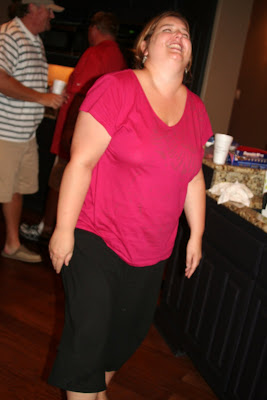 All the memories came flooding back to us!  We started pulling out Michael Jackson moves we had no idea we could remember! 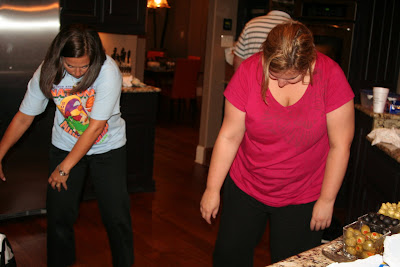 Remember this zombie move?  Isn't that Thriller?  See what I mean?  You can't remember until the music comes on, and then your body just takes over! 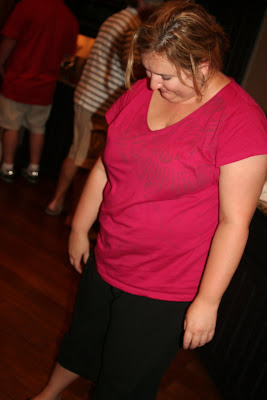 Staci may be the champ-een  at remembering Michael's moves. 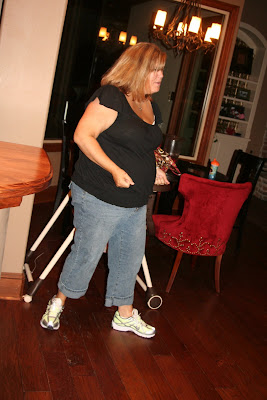 I don't think mom let me watch as much mTV as Staci did, because she was reliving videos with scary detail! 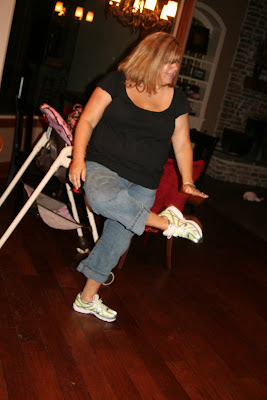 Oh no she dint pull out that whole scene in the street dance.  What was it?!  I dunno.  Mom had me watching LPB. (Louisiana Public Broadcasting!) 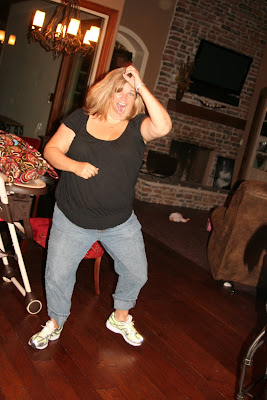 Oh, yea.  This is more of that dance.  Remember?  That little pelvic back and forth thing as they came at you sideways? 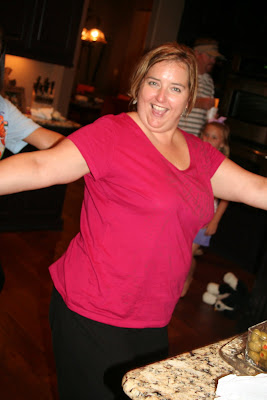 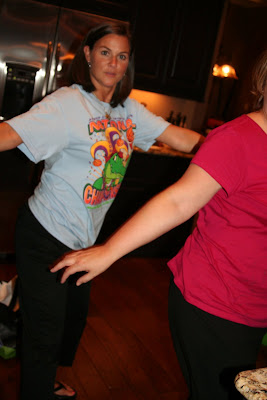 We are considering just building one big bridge from the three of our houses.  Seriously, aren't we together , like, every night?!  And I said it will be a good thing because we will not have to buy many go out clothes from now on.  I mean, we could really get by with tee shirts and pajama bottoms.  That is what we wear around each other anyway.  In fact, although I didn't capture it, Cynthia, from across the street, WAS over in her pajamas!  But, she is 42 and pregnant with her 5th, so I wouldn't blame her if she totally quit bathing and never got OUT of her pj's! 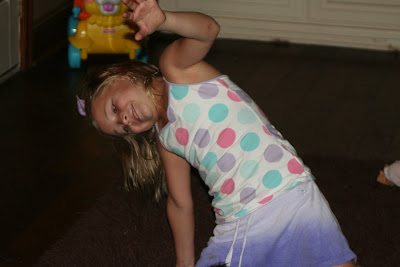 Not sure WHAT move emma is doing up there!?
Even my no-dancing Todd got into the groove! 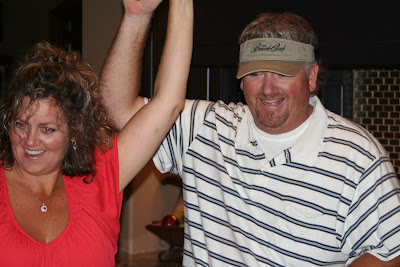 He was twirling me around and I was just hangin' on! 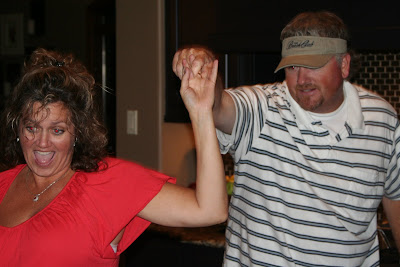 The middle of the kitchen was the dancefloor.  And each person took a turn. 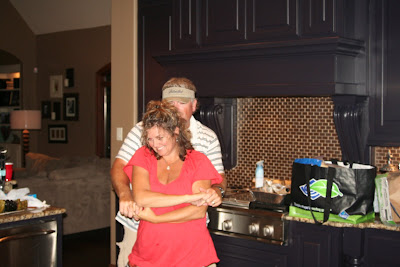 When a particularly good song came on, Don would crank it up! 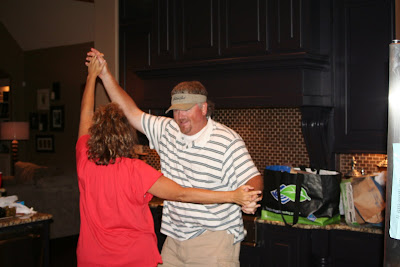 OMg.  Is she back?!  And with more of the video moves! 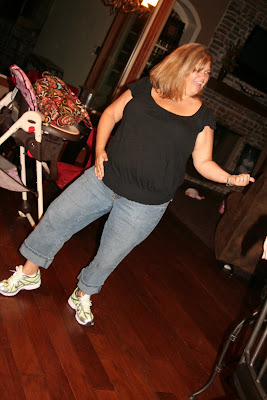 Mom, you should have kept a closer watch on her.  She was corrupted! 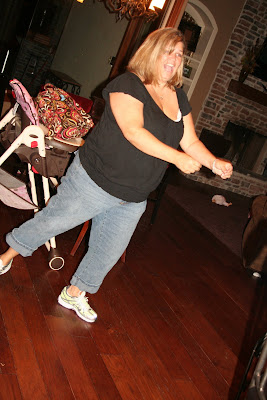 Staci, if you sprain your ankle, you are going to have to pay with your insurance like everyone else.  I mean it.  You have been warned! 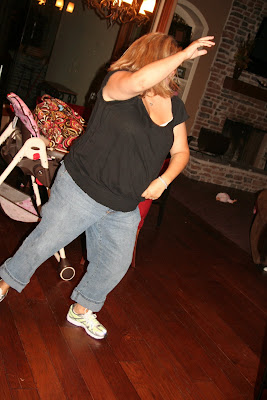 I think I have mentioned before that Todd hates to get in pictures with Don.  It is just a long standing joke.  SO, Don's mission in a group setting is to sneak up behind him and do something stupid.  Got him! 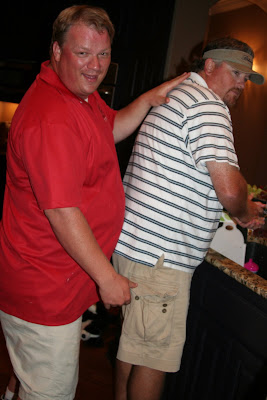 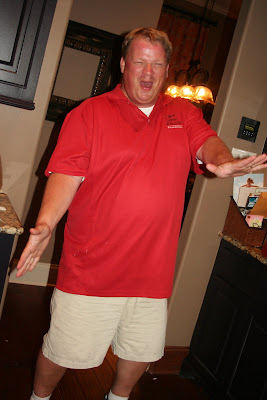 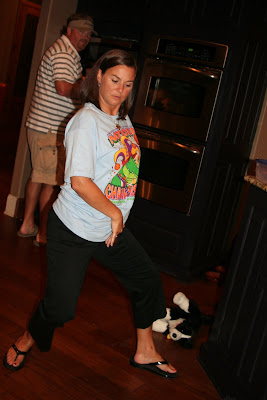 Yes, Michael Jackson DID grab his crotch a lot, but I don't recall him patting it or acting like it had a flap. 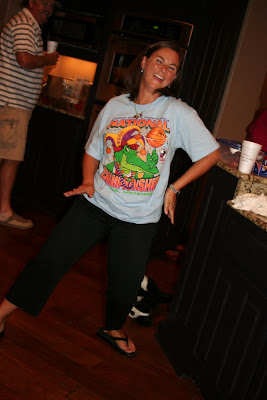 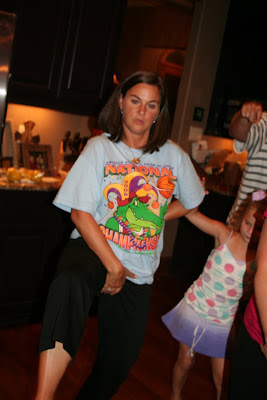 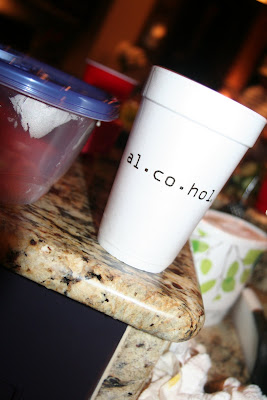 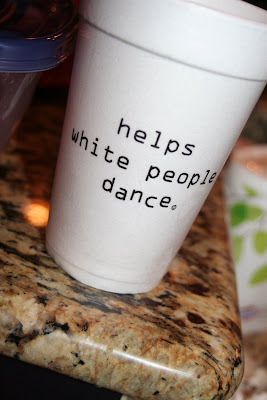 That color looks great on you with your tan. Stacy looks like she's losing weight.

I think we all need to move closer to that party!

I love the ones of you and Todd the Bod dancin'!

Okay...now that is some seriously funny stuff! I wish I could have been a fly on the wall. Can I be your neighbor too??? And that cup completely CRACKS me up. To perfect!!!

What a hoot! You guys have more fun than the law allows! Go for it until the police come with sirens blaring!

Play that funky music white boy.......So they think they can dance? I would chalk it up to the al-co-hol, but I know better! Ha! Love Paula in these pics! The ones of you and Todd are great!

Loved the dancing pictures, ya'll are going to have sooo much fun being neighbors, I'm jealous! I just wanted to coment on your weight loss, girl you are looking SMOKIN HOT! Keep up the great work, its paying off! Hugs from Fort Worth!

What fun! Where did whomever find that cool cup? I neeeeeeed to know.

R.I.P. Michael Jackson!! You'll be missed but your music will live on in Mo's friends and family..LOL.

Hahaha! You all are a hoot and a half!

I soooo wish you had gotten some videos of all of the dancing. Looks like loads of fun!

Thanks for the laughs. Y'all crack me up.

I find it hilarious that those cups were on hand!! Definetly pictures to keep for blackmail:)

Lawd have mercy!!!! LOL The cups are adorable!

LMAO! That is so funny! but looks like tons of fun! hahaa

I must know where the cups came from. The last ones I had said "Big Girl Drink". I need to get some more. Give us the hook up. I want to come play some time too. I mean do you people ever get tired. Ya'll wear me out just through the pics! Glad the Shake went great! Once again I wasn't in town. One of these years, I'm going to work it all!