Let's check out a few cute little girlies. First, there is Ellie Sue, who got a cute little froggie backpack from the Easter bunny! 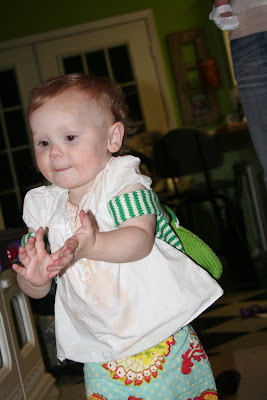 I am not sure when in the world she will ever have a need for a backpack, but when she does... we will be ready! 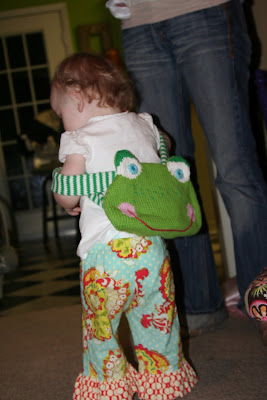 I ordered it from here. 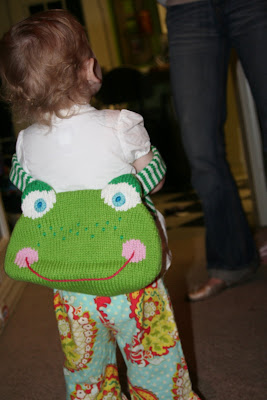 And here is my little baby girl. I am just having so much fun with this sweet angel. She just grins all the time. I do believe she KINDA started trying to scoot her little self forward tonight on her belly. Yipppeeee! That therapy is already paying off! 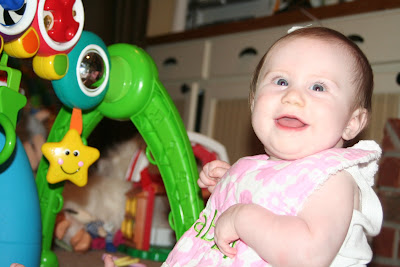 I tried to take a picture of her super cute little felt barrette that has "Gabbi Lou" on it. I always struggle with what to get monogrammed on her things. I know there is always GGL with the Big G in the middle. But, when I put her first name on things, I don't ever really know whether to put "Gabbi" or "Gabbi Lou" on things. What do you think?! I typically put "Ellie" on her things, but if it is purple and gold, I put "Ellie Sue". I just don't know about Gabbi Girls' stuff. 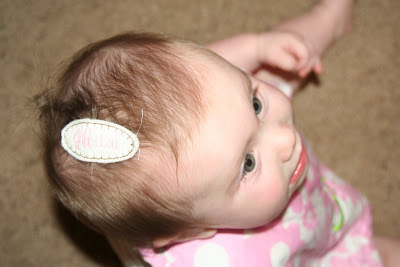 Staci and Masson came over to my house this weekend and we revisited the cleaning of the closets. We have to do this (MAJORLY) each season. I have so many hand me downs from Ellie and Maddi, that we seriously can't even wear them all. I needed these two helpers to help me see what was cute, cuter, and cutest! I say all of this to explain that I would have never seen these bloomers as a piece by themselves. It has a shirt that goes with it that I am not all that crazy about. So, I chunked it into the give away pile. Staci said, "but didn't you say you wanted to put Gabbi in bloomers and tanks a lot at the beach?" I said, "Yea, why?" She pointed out that just because I don't like the shirt, I could still love the bloomers. Why in the world don't I think like that?! And sure enough... look how cute! 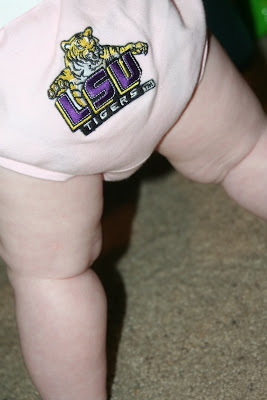 I remember thinking Ellie's little thighs were chunky. And then there is this one. She was the one that everyone thought was "so tiny". EVERYBODY told me, "She is so little", and this was a general consensus until she was about 6 months old. Then, we started seeing a few rolls! And voila'. We don't really hear about how tiny she is anymore. Good! I like fat little babies! 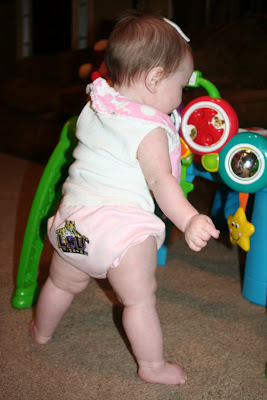 Gabbi likes this toy. She grabs onto it though, and gets so excited and latches on and pulls it right down onto herself. Then, she falls backwards and it falls on her, and she gets all bent out of shape. She won't let it go! Cute little kid! 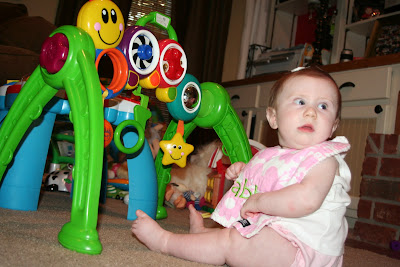 And here we have Maddiboo. Funny that I had these very velcro rollers in Ellie's hair the night before, and she too, seemed to LOVE them. But Maddi took it to a whole new level! She refused to take them out! She LOVED them. 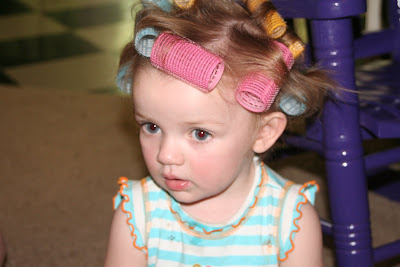 I was thinking the exact same thing as Staci when she said, "That reminds me of our pageant days!" Our mom used to make us sleep in sponge rollers. We were both pageant girls. Have I ever told you that?! As a matter of fact, we were both State winners! yes, we were! We were in two different systems, like Miss USA and Miss America. My system was called Miss LaPetite, and Staci's was called Cinderella. We were in pageants just about every weekend, I think. I ended up being in pageants until I was about 13. Can you even believe that?! That was the same age I got out of ballet and dancing altogether. That was also the age that I went all sports! Softball, basketball, track, you name it! Ok, so that was a HUGE BIRD! 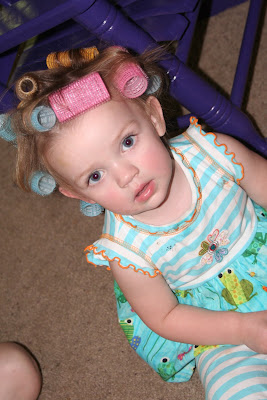 Back to cute girls... here is Gaggi Gull standing up again. Big ol' show off! 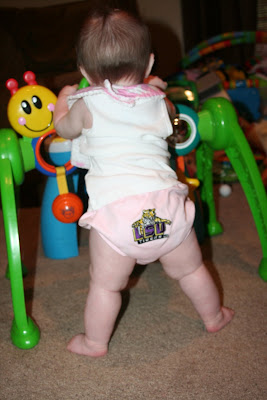 Melanie
Posted by melanie, aka Mo at 9:30 PM

such joy reading your blog and looking at the pictures.thank you

Hi Mo - uh, I'm having a little trouble reading ed's comment! Your girls and Maddi are precious as always. I remember my oldest son having 1 roller in his bangs at about that age at my mother-in-law's. So funny! On Gabbi's personalized items, go with just Gabbi. It's such a sweet name even all by itself! When is Staci gonna finish the tour??!

DELETE ed's comment! I accidentally clicked on it as I was scrolling to the bottom and it needs to be removed.

What in the world is ED talking about? Looks like a FLUKE to me!! ANYWHO......I say just GABBI on the barrette, believe me she will hear her WHOLE NAME pronounced more than she cares, especially when she is doing something naughty (LOL)!

Maddi was just too precious w/her rollers!!! That's definitely a keeper, 15years down the road from now she will simply DETEST the picture......prime bribary material...ah..don't you just love it!!

PS Mo, be a good sport and show us some PAGEANT THROWBACK PICTURES!! I'm sure ALL of us would love to see them!

I'm with GiGi, I clicked on ED's message and the site it brought me to was horrible!

Hey there....Been a while since I signed but I just had to today! First of all..I love the frog backpack and the little LSU bloomers. But then again, those little girls are PRECIOUS too!!!! Second....As someone that has SEEN the closets and little girl clothes in your house,AND someone that is expecting in October...I have to ask...Does your "give away pile" already have a home???? If not..we need to talk!!! U got my e-mail address I think, but if not..M_Hodge627@hotmail.com. Let me know if any of those itty bitty clothes are just dying for a new home! Thanks chick!

just adorable as all get out!

I'm with Mrs Hodge on the hand me down cutie patootie clothes! My itty bitty Allison is due in July and I love, love, love all the dresses that your girls wear! Is there a Groves garage sale coming up? I could send my momma over there. : )
Oh, I kid, I drive back to West Monroe to meet you!
Paige

ok now that you told us....you HAVE TO track down and post some pictures from your pageant days!!!

Now I for one would LOVE to see the pics of you and Staci during your pageant days! Or maybe some stunt pics from your middle and high school years to compare your recent VERY impressive stunt pics! :)

LOVE the pics...ur girls are precious!

OK MO.....I have an idea for a new kit. What do you think about a hair bow kit? I know with your crafty skills you can pull this one...I await your thoughts on this idea. Thanks for sharing your little ladies with us. They are too precious. Have a great day!!!

I used to wear sponge rollers, too! My mom would roll my hair and my sister's hair on those sponge rollers every Saturday night. That way we'd have nicely curled hair for church. Ugh. I hated sleeping in those things!

The girls are adorable, as always! I love chubby little legs...adorable!

a picture a day means the memories will stay said...

Love the frog back pack and pants Ellie is wearing. Love Maddi in rollers. And those chunky thighs on Gabbi......OMG--precious! I too love chunky babies.