I have so dang many awesome pictures to share! I mean, sometimes I go through a drought of "what am I going to post about" and then I go through a FEAST of "Dude, I have SO much to share so where do I begin?" And that is where I am now!
But, since I am just now getting around to loading up the gazillion pictures on my memory card, I will pick something short and sweet tonight. Let me share with you what my favorite neighborhood friend and I made this weekend.
Seems the first graders are having a "what can you make from an egg?" contest! Sarah decided she ONLY wanted to make a Hannah Montana egg! So, Sarah called and said she'd be coming over with her egg. I recommended they also bring a not-so- favorite Barbie. Poor, poor Barbie! She just didn't know what was in store for her! THIS is what we made with Sarah's egg! 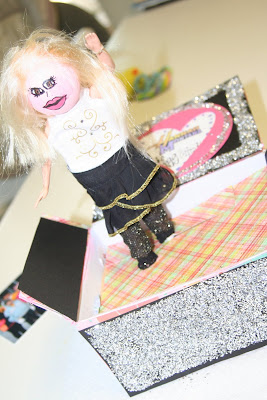 We stripped her poor little arms off, and her poor little legs off, and then chopped that hair down to the scalp! Hot glue gun in tow... we got er done!
Then, we took one of Ellie's little shoeboxes and built a stage. We even drew an "S.O." in swirly letters (Sarah's initials) as a tattoo on Hannah's shoulder! Cool, huh?
Later, her brother used some sort of twisty bendy things and built a microphone stand, a microphone, and a guitar! 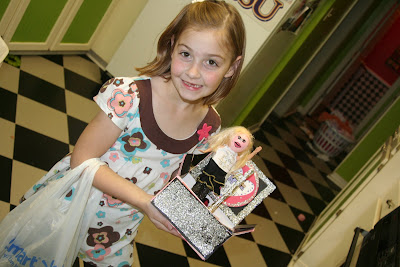 I had to go out to Target later, and I found a recordable gift card. Just so happened it looked like a jam box, so it was perfect! Sarah was to sing, "Besssst of both worlds..." and write, "press here" for the judges to get the full effect. 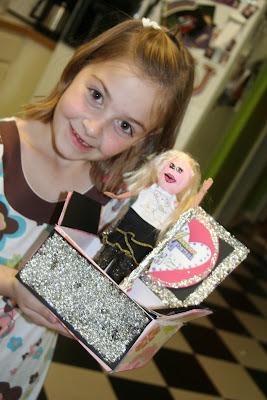 Sarah's big brother won this particular contest when he was at the elementary school, and Sarah is SERIOUS about bringing home the "first place ribbon"!! I hope she at least places, because she means BUSINESS! 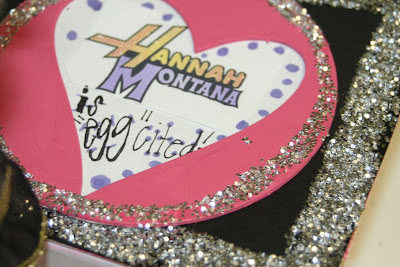 I can't believe I missed the completed project, but in case you are wanting to stay up all night... check this out. A little Chucky-esque wouldn't you say?! F.R.E.A.K.Y! 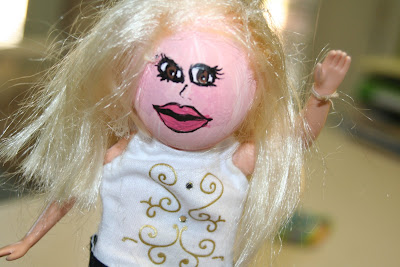 But don't tell Sarah! She thinks Hannah is The BomB! I mean, "eggcited!"
melanie
Posted by melanie, aka Mo at 9:37 PM

Wow...that's amazing!!! Leave it to you to make the egg a set complete with props! If she doesn't win, then i demand a recount...even if her face is a little freaky! You 2 did an eggcellent job:)

What fun! Great job, ladies. I just love it. How nice to have a crafter so close to home to share a fun time.

Wow- what an awesome project! I hope Sara brings home the prize today. She looks soooo proud of herself.

Ya'll did such an awesome job. I am so uncrafty. Very good luck to Sarah.

I remember those days of school projects...ugh! The ones I dreaded the most were the science projects. Where were you when I needed you, Mo??? You could have helped my boys!!! LOL

Please let us know how this all turns out...hope Sarah wins!

That was funny, and very creative. You will have to tell us if she wins. She does look a little freaky, but I guess what do you expect for an egg and a barbie.

Dang I wish I lived near you. Can I send my 16 year old to stay with you during Christmas this year so you can help him with his science project?? That EGG is fabulous!

That was the best! She knew to come to you!

She knew where to go for help. What an awsome "egg"

Oh, how I wish I had a creative brain like yours and I wish I lived closer so when my kids had a really cool project to do I could send them to Mo's house. I know you and Sarah had a blast creating that doll. I can't imagine her not winning top honors.

okay that is is....I am sending you ALL of my 5 kids craft projects cuz I so suck at that stuff. So yea, when it comes to reports that require crafts be prepared its coming your way! LOVE the HM doll/egg idea!

Can't wait to find out if she wins the contest! Love the creativity...

You are so crafty..I wish I could do things like that!!! Let us know if she won.

Girl, that is one ROCKIN' Hannah Montana Egg! I love me some HM!

Now that is some funny stuff!

Good luck to Sarah! That IS da bomb! We always end up doing these kind of projects on Sunday around 7 pm -- "Oh yeah! I need to make a diorama of Sri Lanka by tomorrow!" My son actually once pulled that one. I had to forgive him because I did the same thing to my mom except it was a plaster of paris model of the earth on Sunday night! The grands seem to be carrying on that fine tradition! It must be in the genes!

OMG this egg looks great! Hey Mo, can you make a CLONE of yourself and mail it to each one of us! LOL!

You EPITOMIZE the phrase "GOOD NEIGHBOR"!!! What a lucky kid!!