DUDE~  When you don't blog for weeks, you have a TON of pics to share.  And let's just start here... this is the dog who has decided he wants to live here.  It is making me sad because I want him to go back home.  Todd won't let me feed him (but I sneak him food!).  I made him a warm bed outside, but it is supposed to be 19 degrees here this week.  He wants to take him to the pound.  WHAT can I do? That just flies against everything I think about animals.  I need to find his home. 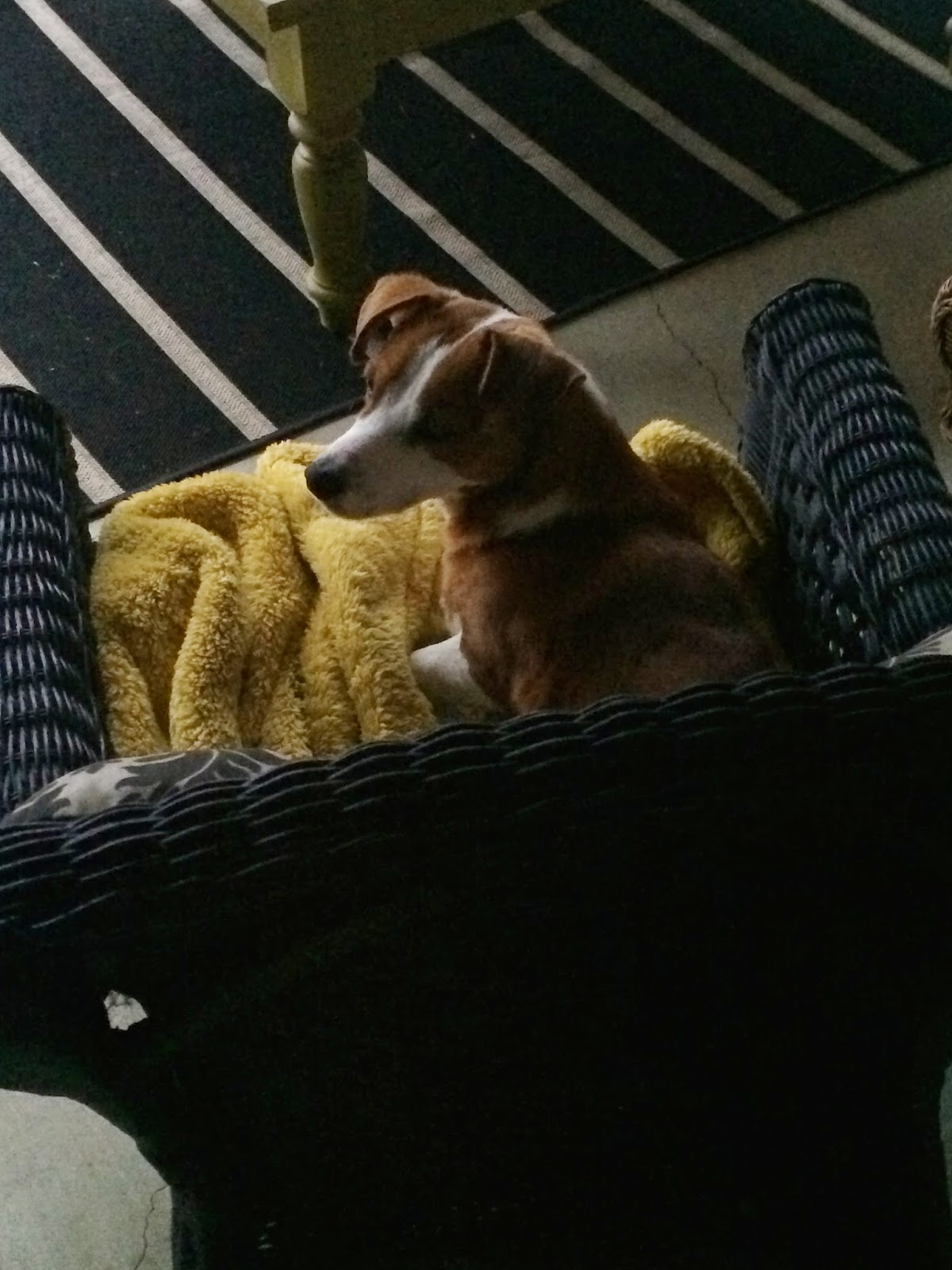 And... as the title implies... this is a RANDOM post.  So, let's move along.
Todd has also decided that it is time that we rid our lives of those melamine (?  Is that such a word?) plates and bowls with all the characters on them, and the ones that SUCK YOU IN at Target during various holidays!!  Yeah.  those.  He put them all in a box and was going to throw them away.  He's been on a cleaning kick!  I said, NOPE!  And so they are still riding around in the back of my car.  They need a loving home.  Just like that dog!
When I was in Target I saw these, and sent him a pic saying we really needed these for valentine's Day!  haha.  He was not amused. 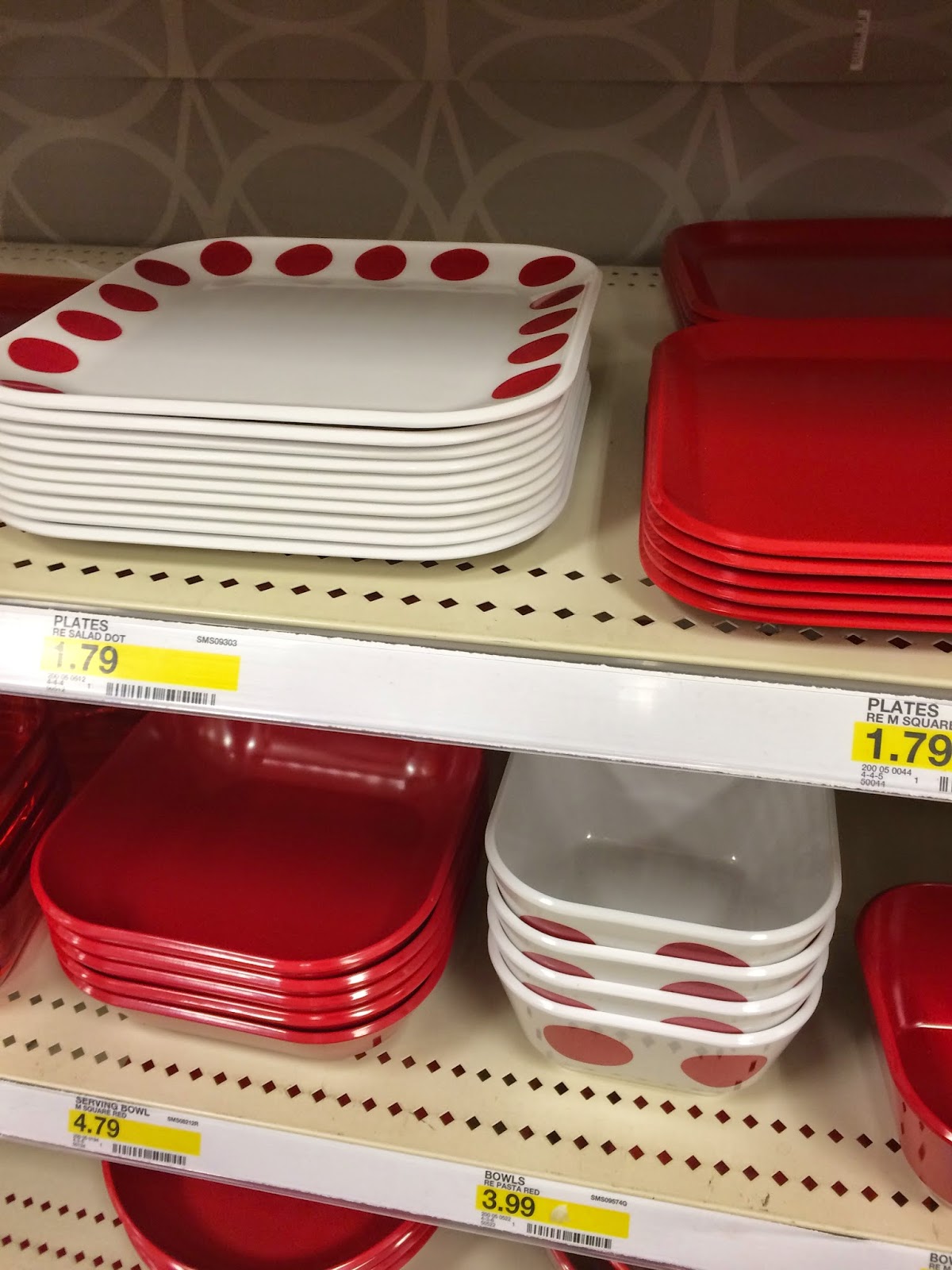 This is on the MMPT sign right now.  As most of you know by now, I am a Maximizer (in fact, let's see who catches this, it's my word of the year!), so I like things to be great!  People, matching people to their job roles. and even spacing on the sign.  Yep.  this about drove me nuts.  Keif, who well knows me by now, went to the clinic on Saturday morning to change the spacing so I won't go insane.  Thank you so much, Keif! 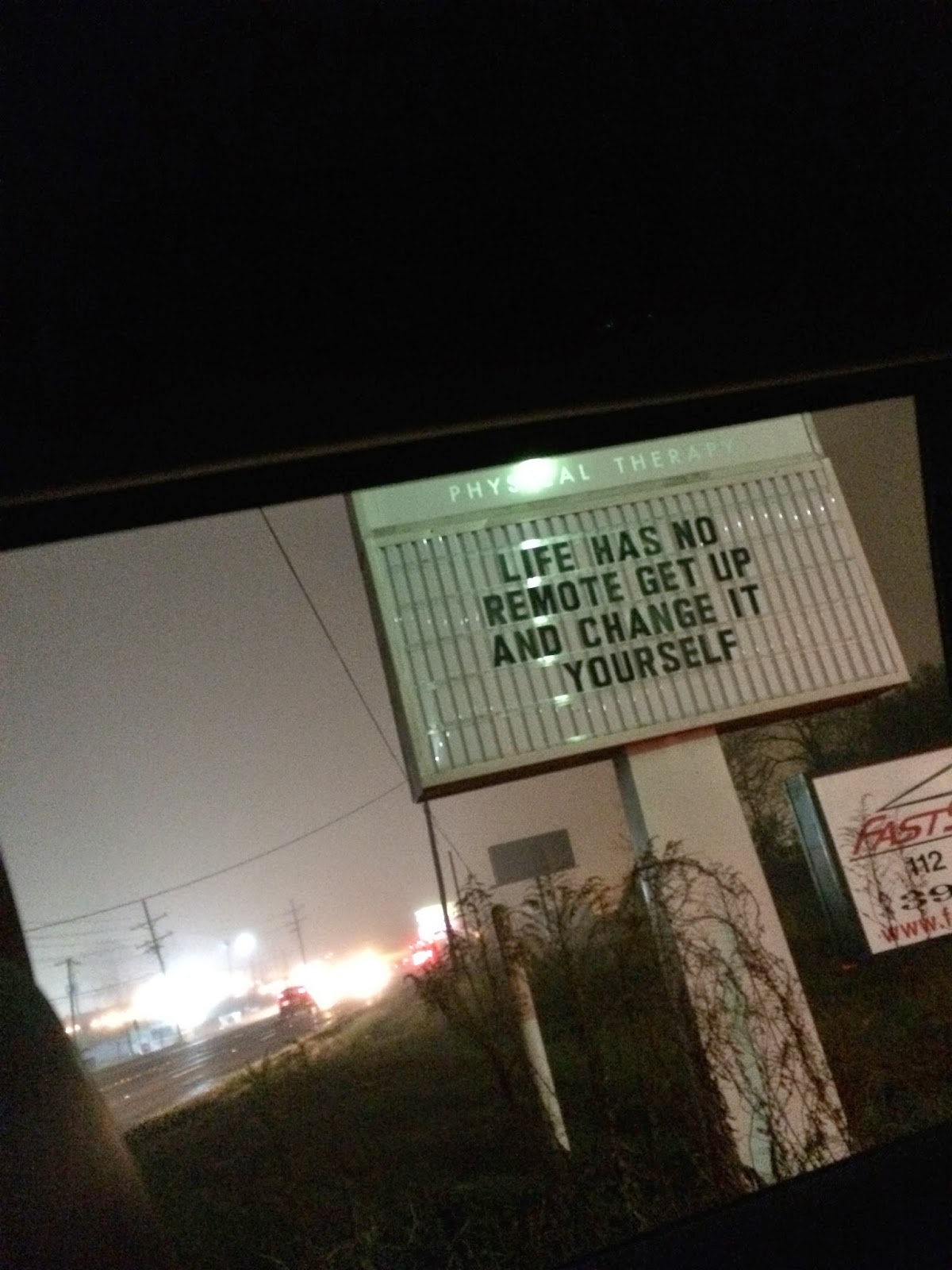 Whaaaaatt?!  WORD!!  We'll be hitting this kind of thinking this Saturday at the planner retreat.  Get your big girl dreaming panties on, girls! 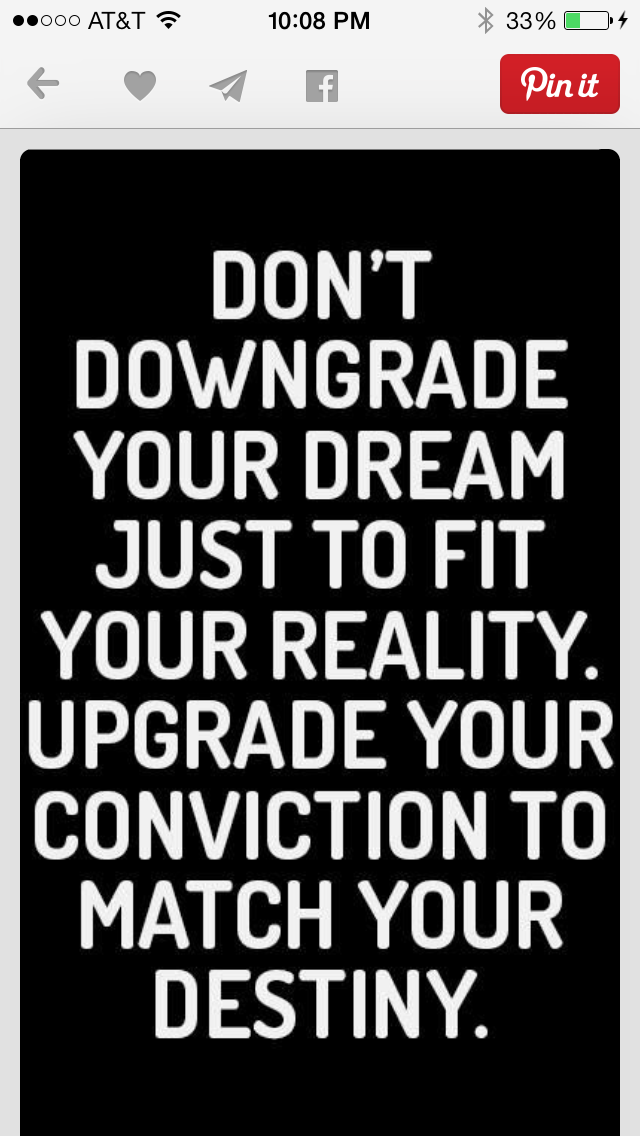 I have, ohhhh, maybe 10 0f these a day now on my phone.  the girl LOVES selfies! And as we were sitting around the house having what I'd consider a perfect family moment, I saw this! 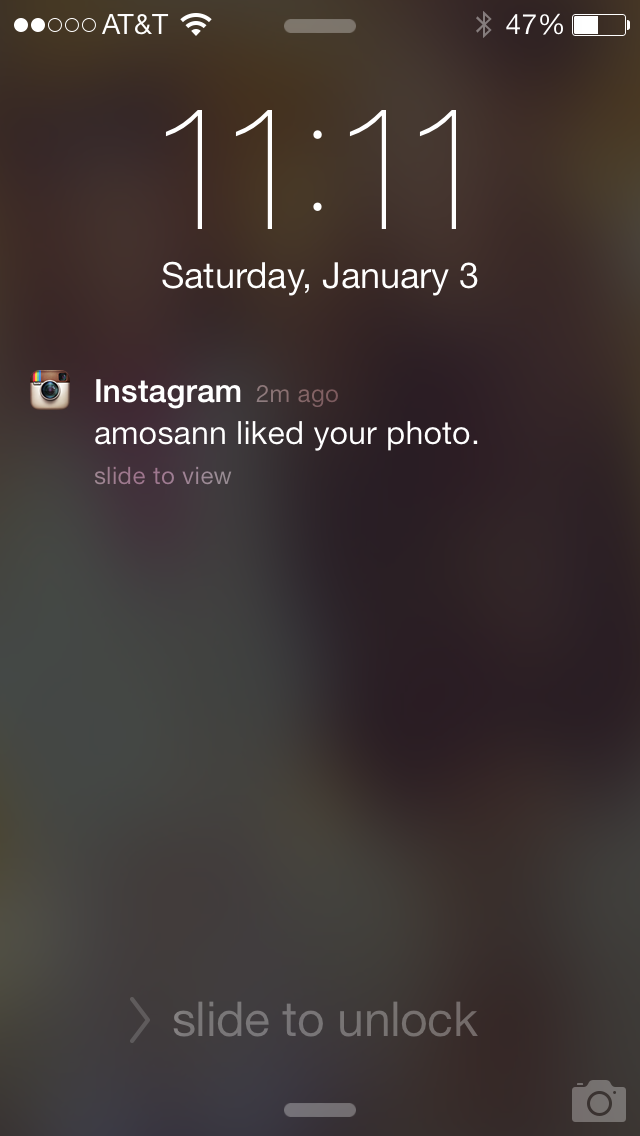 And then, I captured this. (I am married to an old man. ...
who has hair like PeeWee Herman) 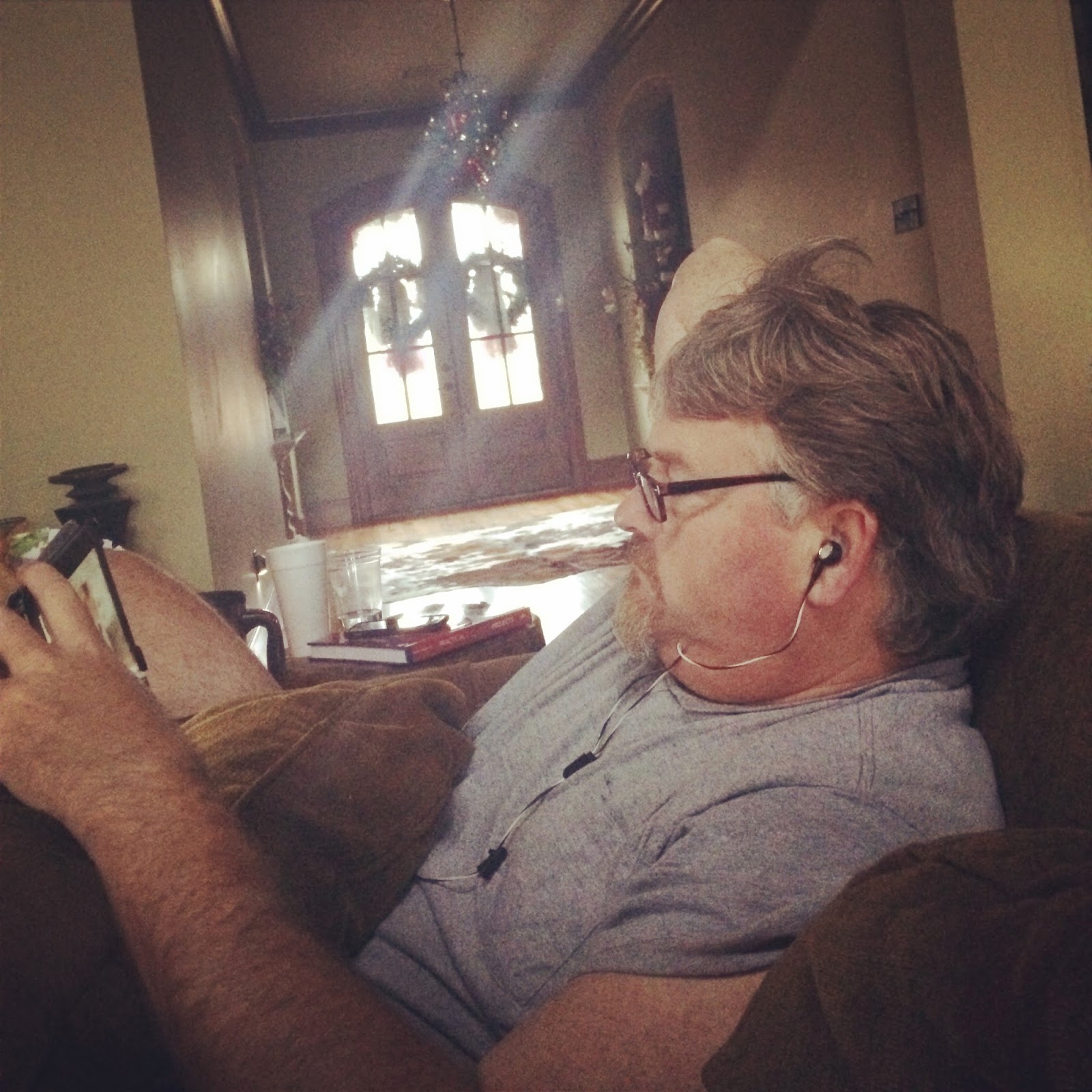 ANd I was sitting right snuggly next to this! 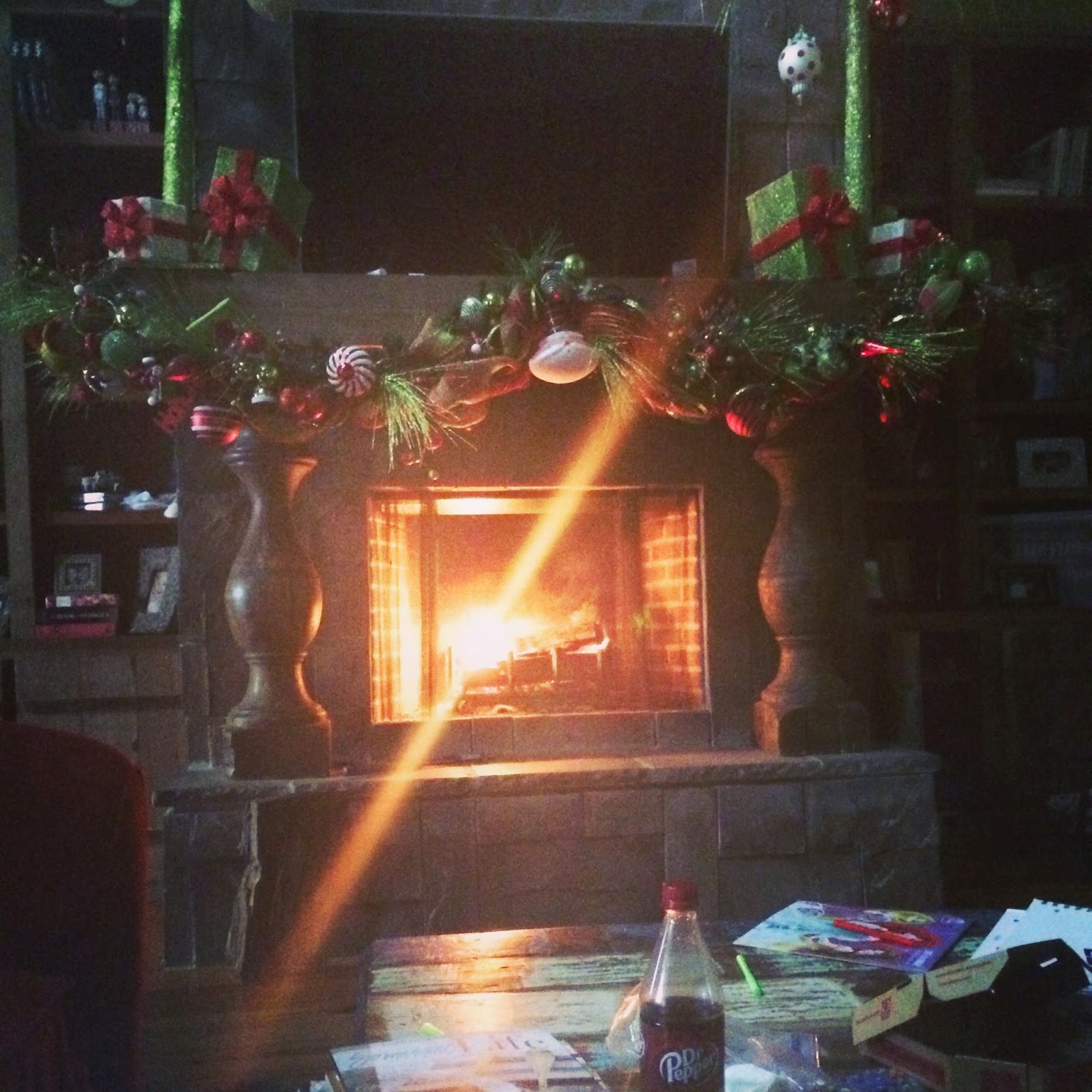 Wearing these... Mary Allison got Todd some of these bendable lights for on your neck when working under the sink or on the car.  Todd and I love them on our necks to wear when we are reading at night.  Nerds. 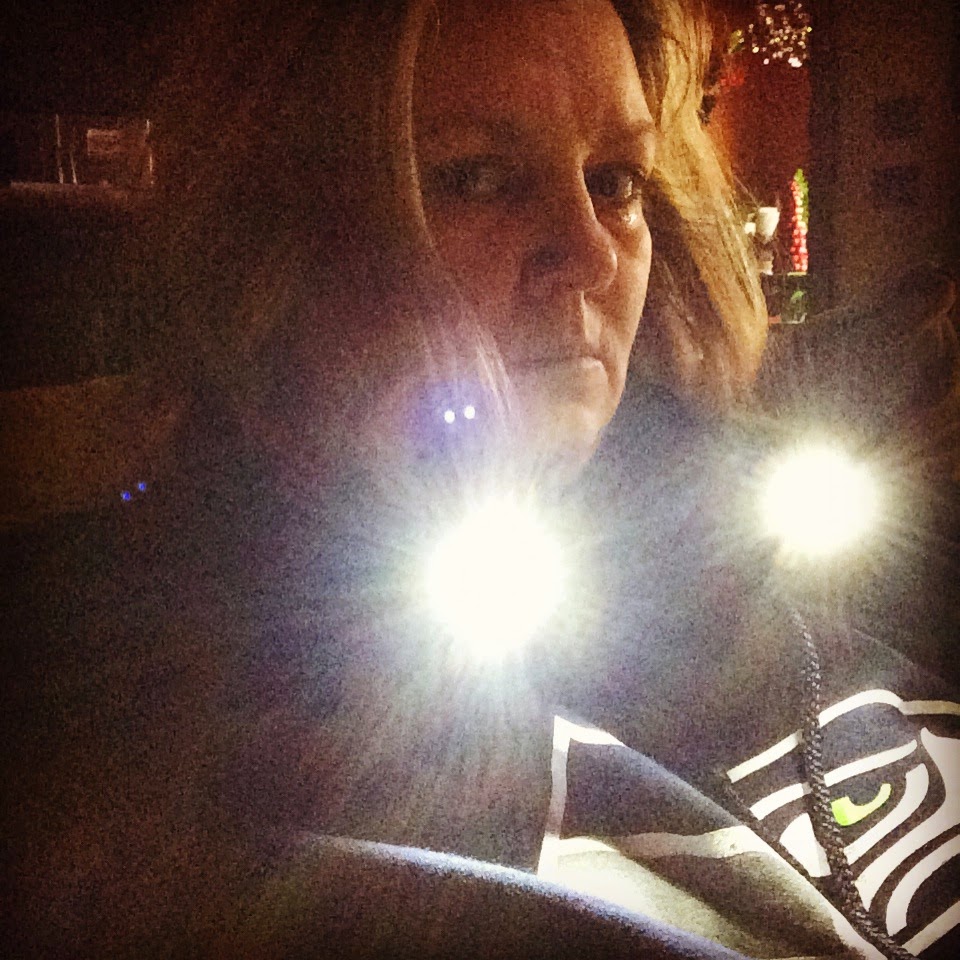 And here he is with the kiddo making his famous 2015 pancake breakfast on Jan 1st! 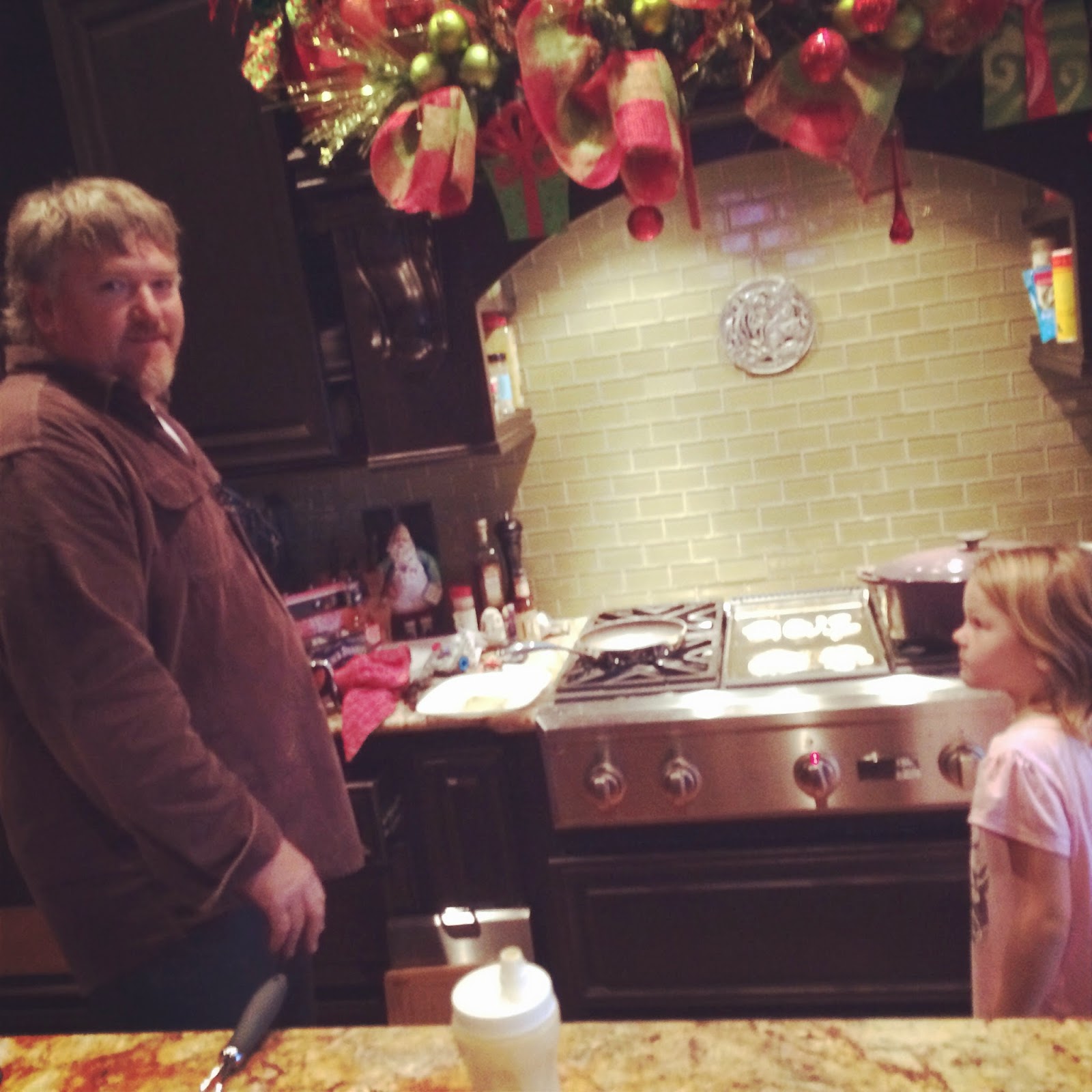 I think Ellie Sue might follow in his footsteps with the cooking thing.   She has shown some interest in cooking!  She'll have to learn ALL of that from her daddy-o! 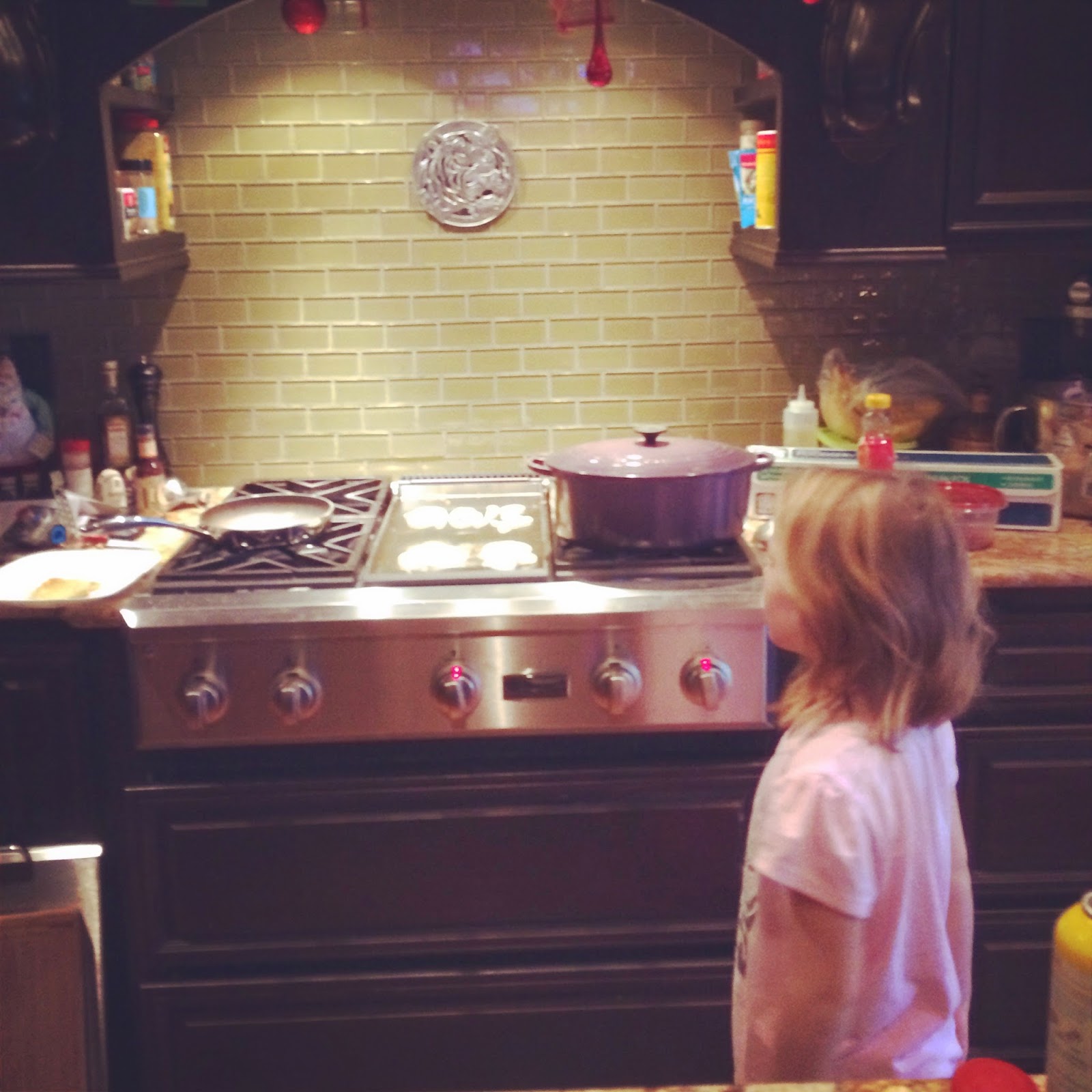 Ta-daaaaah.... welcome to the new year! 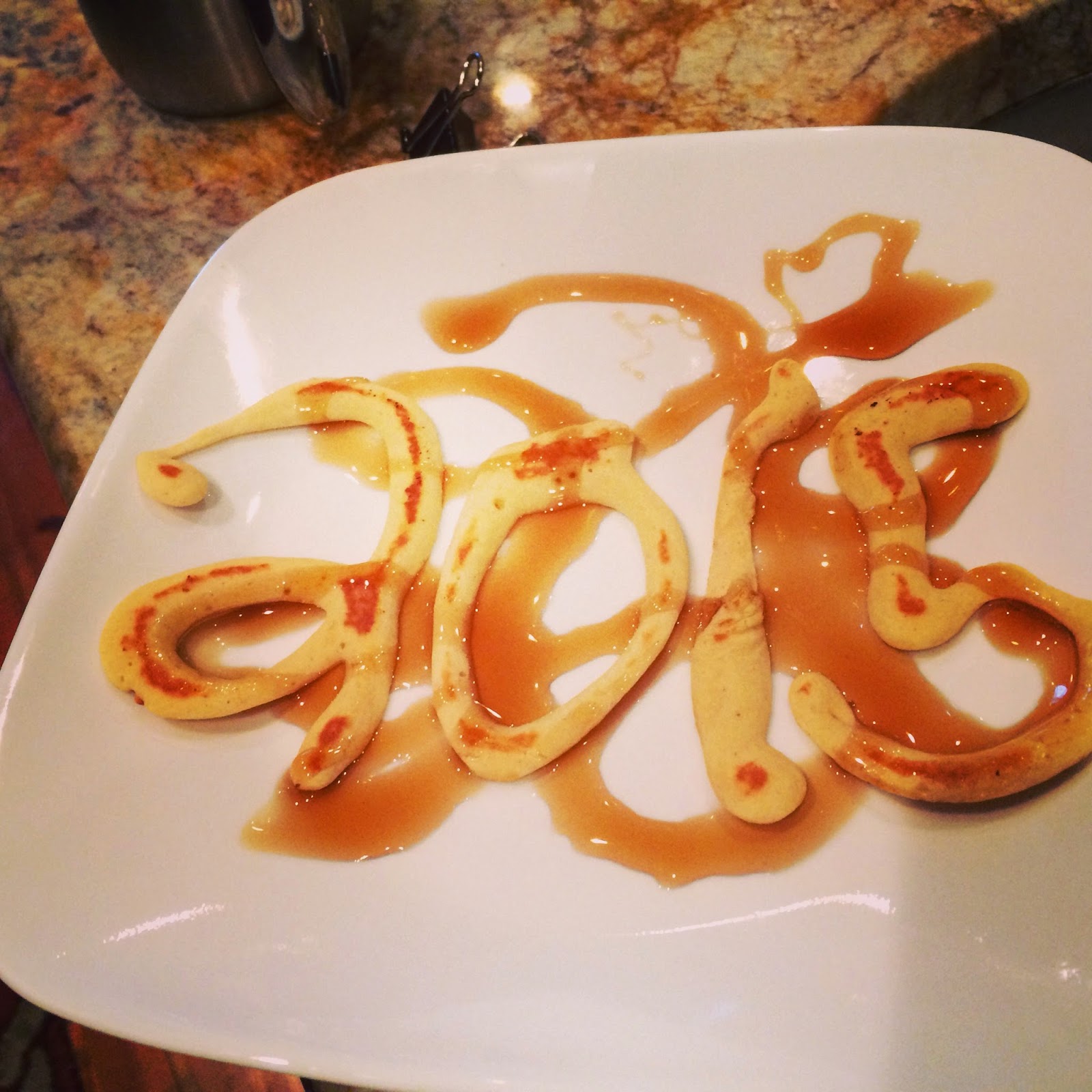 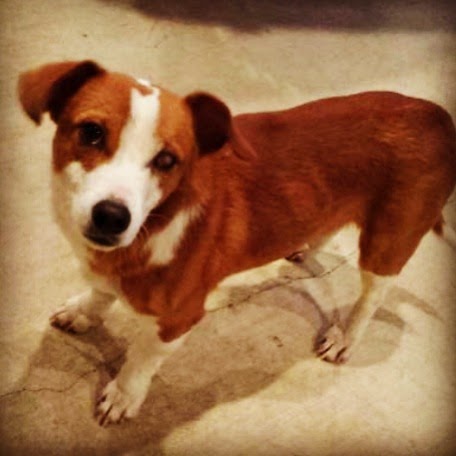 And I am trying to convince Ellie that using old tee shirts cut into cool shapes would be a great way to "fix" the knees on leggings that have holes in them from running and tearing them! 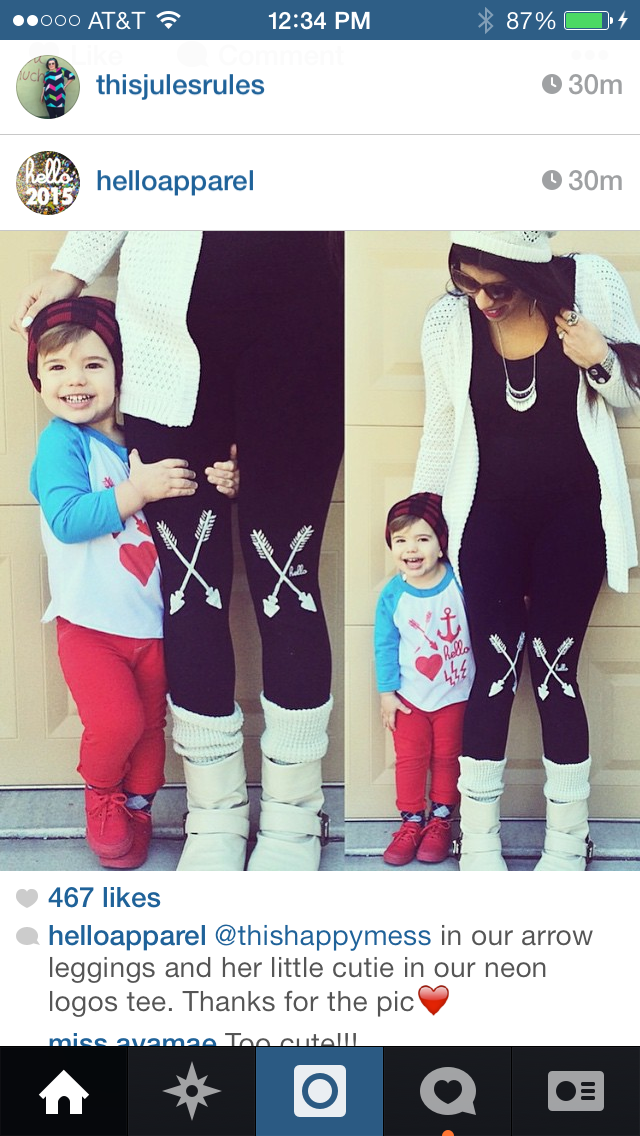 Oh...lookie there.  A local business supporting my little cousin, Sam!  thanks!! 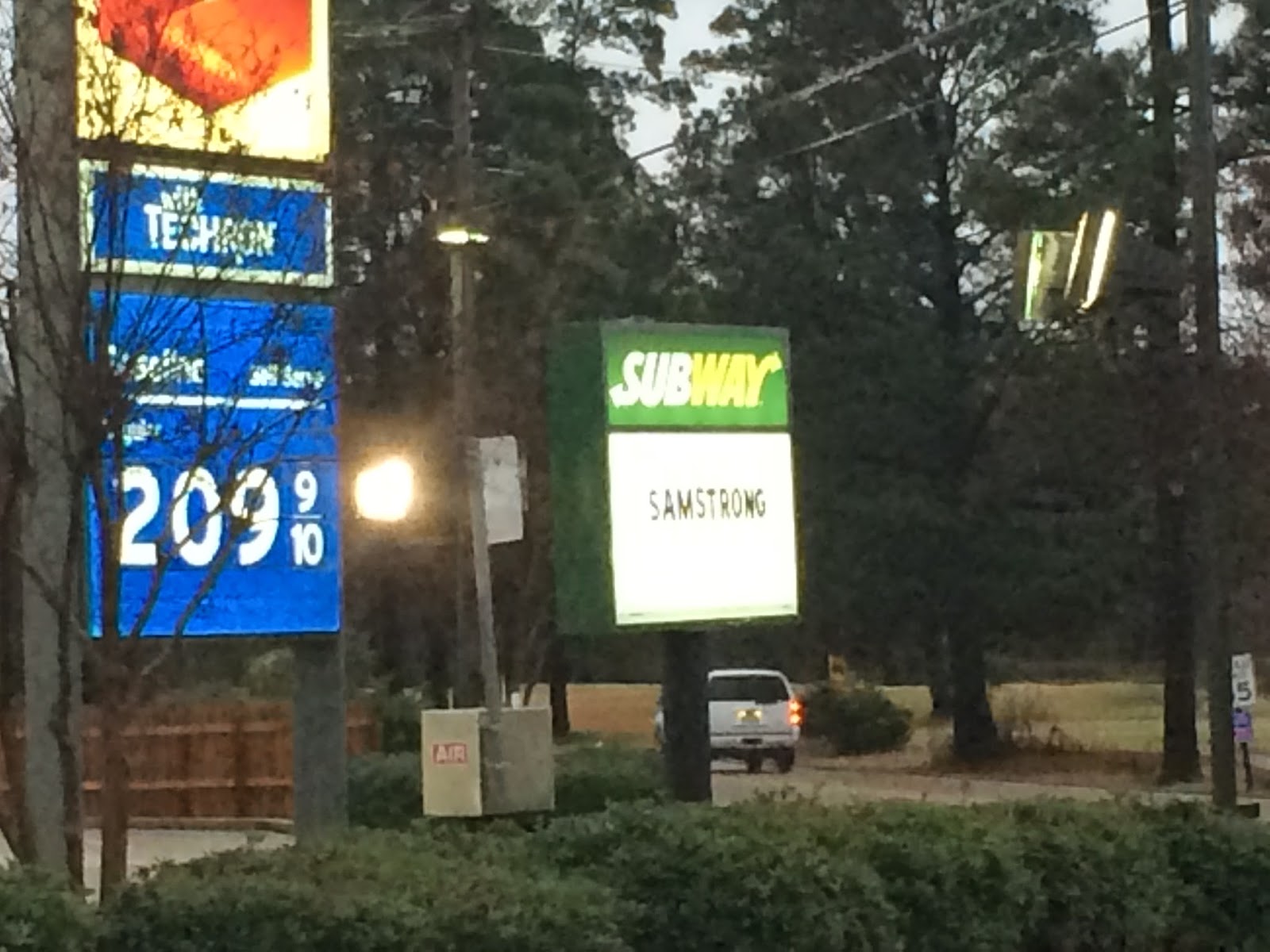 I'll soon be taking a little class online to study this book.  Has anyone read it? !  I think it'll be a deep dive.  That's cool though.  I like a deep dive! If you've followed me on Instagram or FB over the holidays, you know we sort of have a hot chocolate obsession at IHOP.  Actually, mine is flavored coffee.  But still. 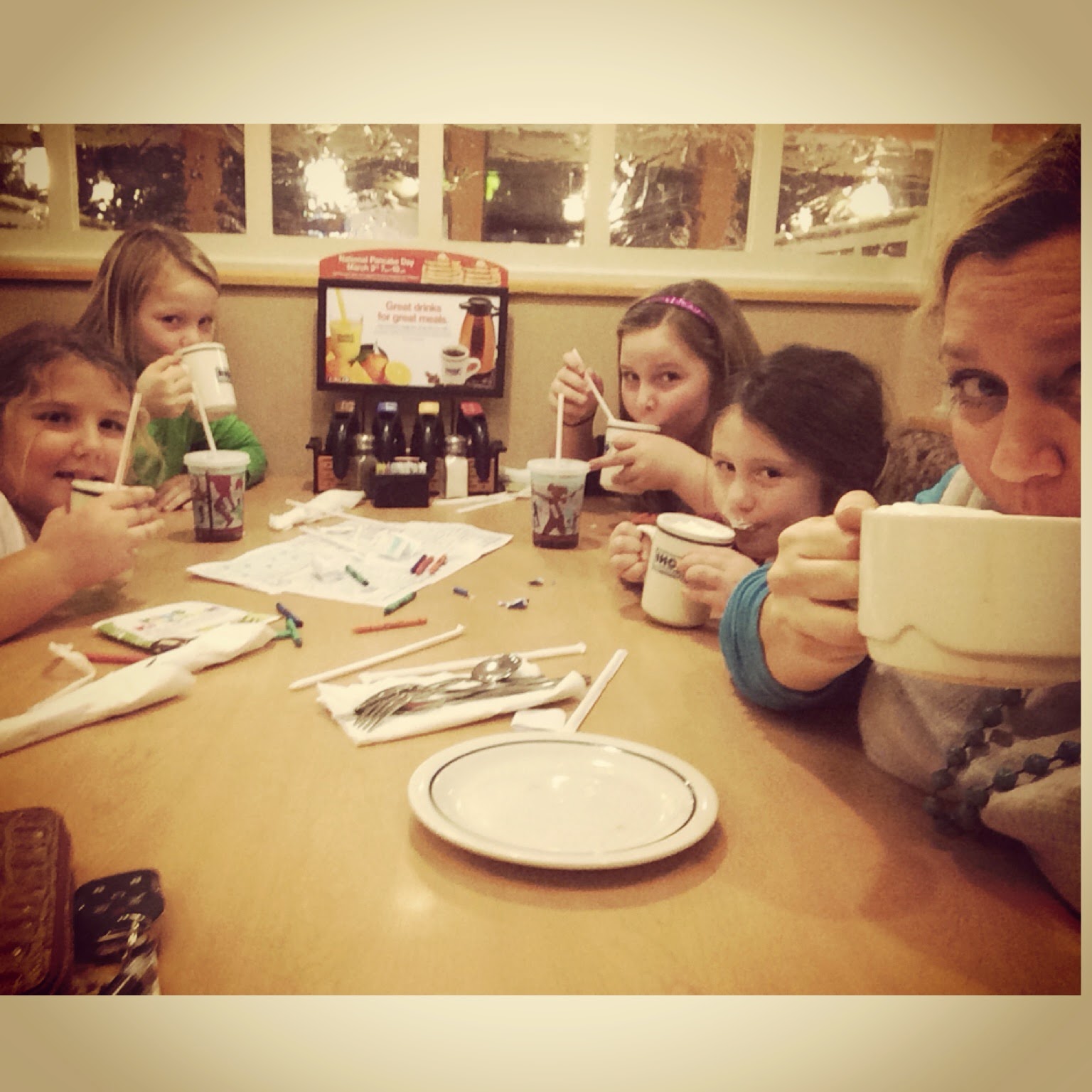 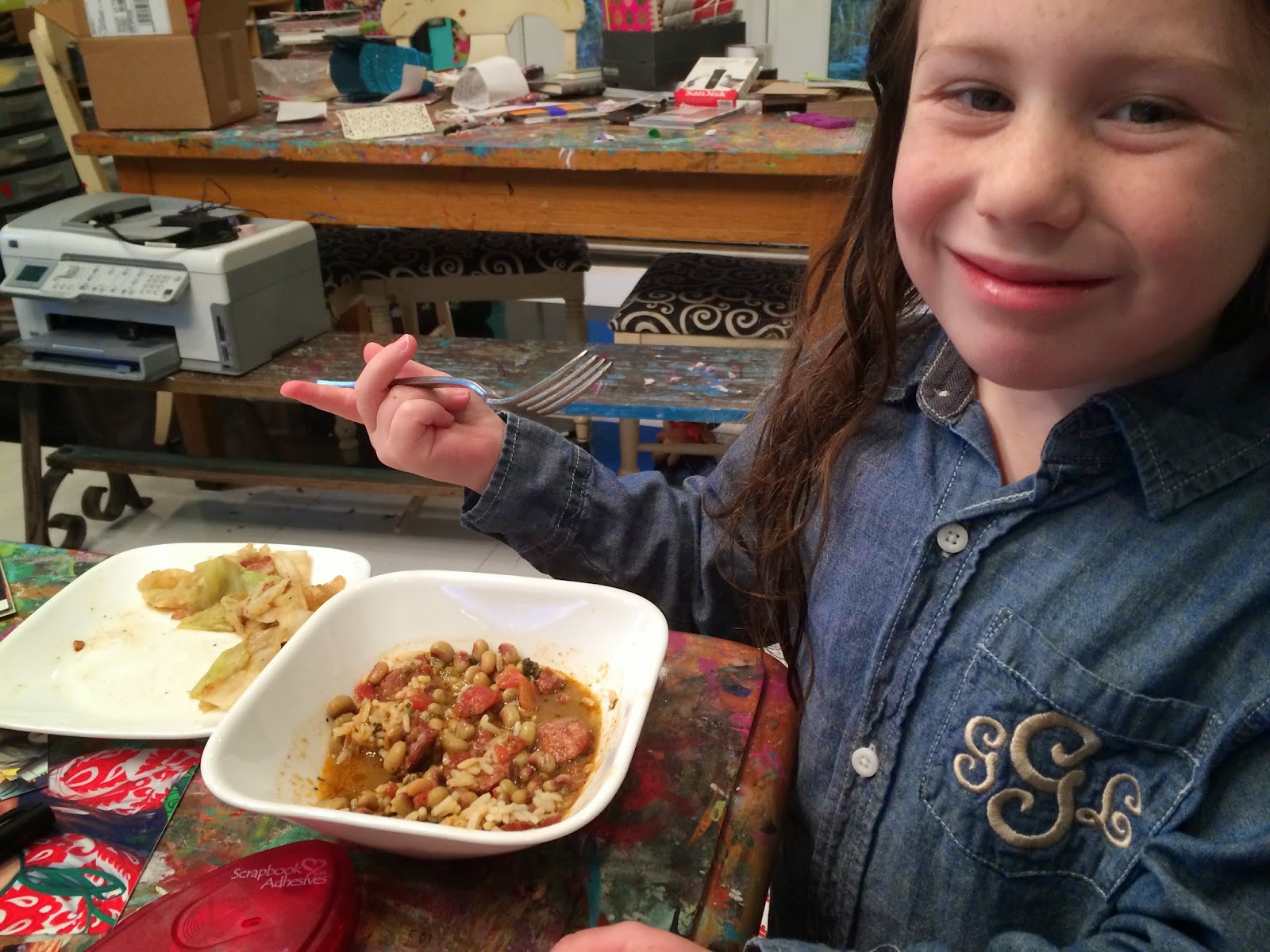 Dad made sure we had our black eyed peas and cabbage on New Year's Day.  He takes care of his girlies. 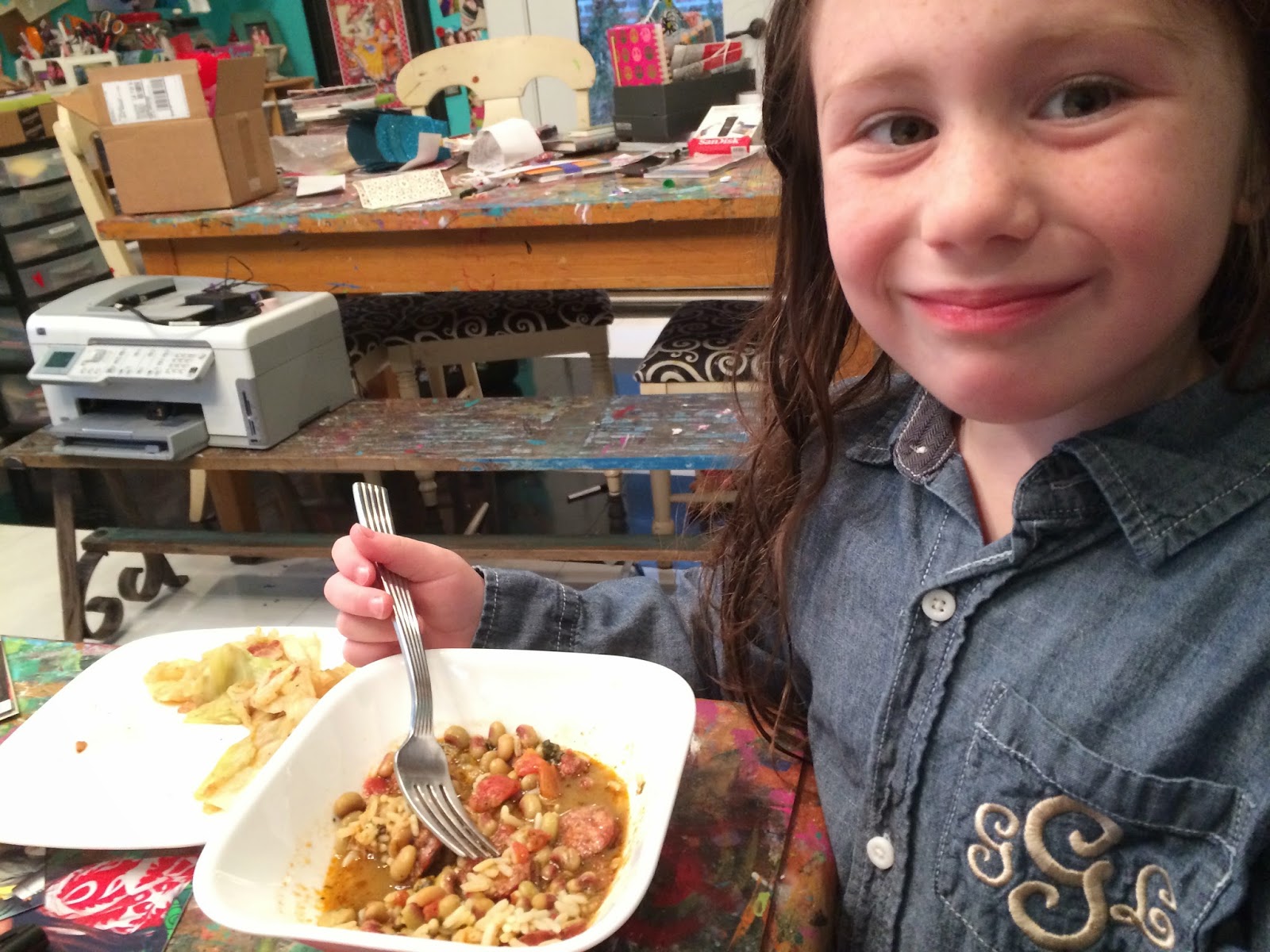 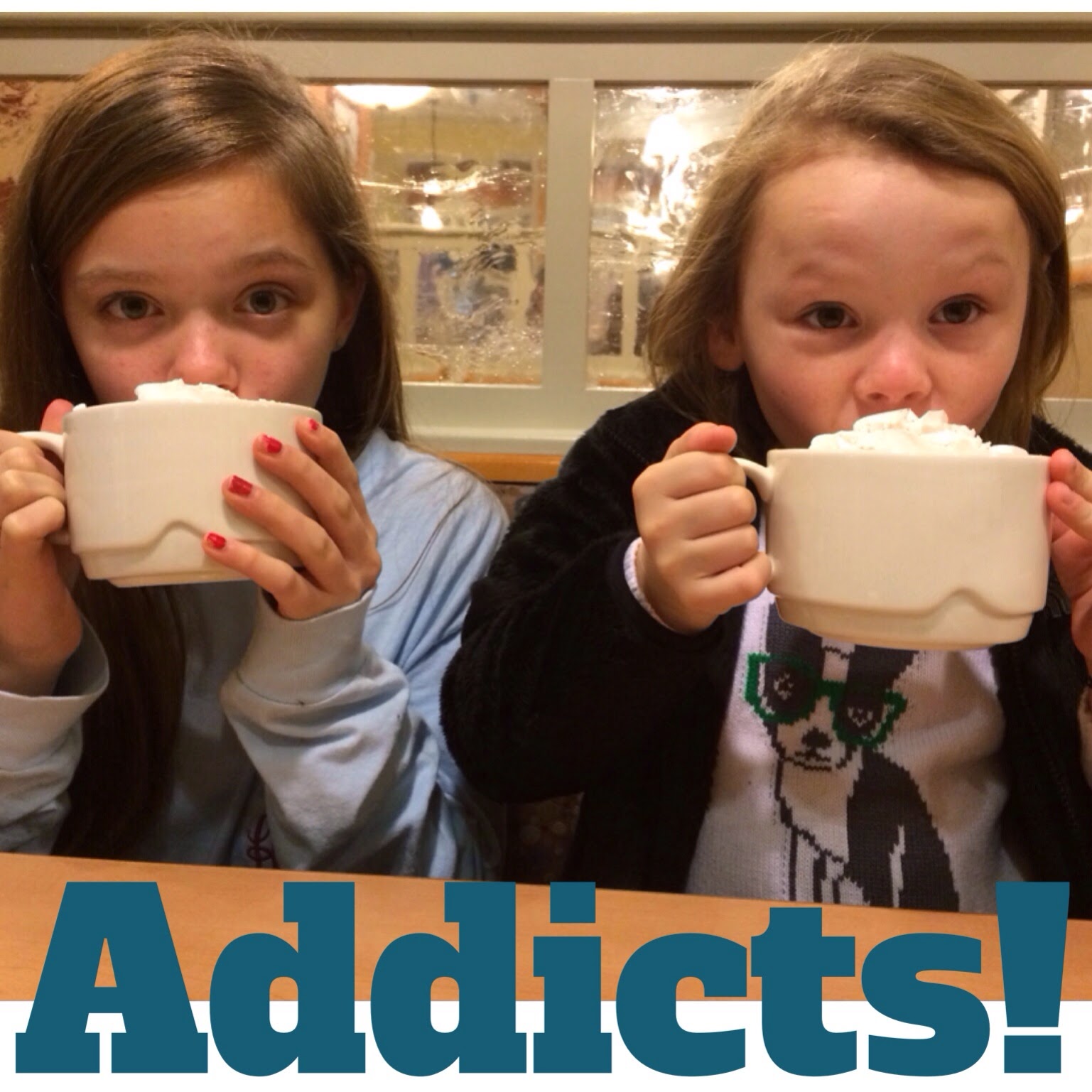 Oh my gosh, I am ready for the girls to go back to school so we can get this house back in order.  It is insane in the membrane! 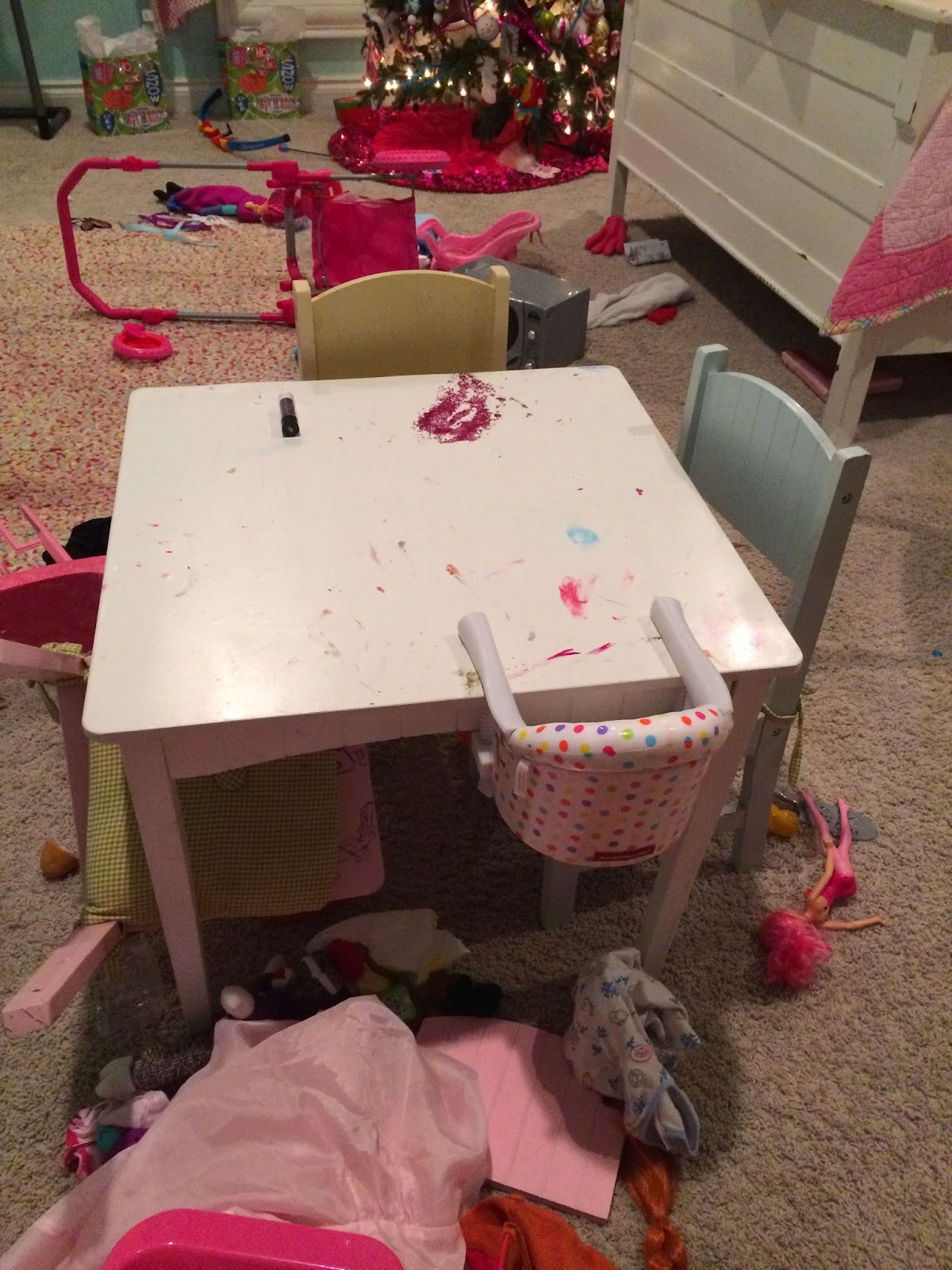 Check.  There they are again.  I texted this picture of thanks to Mary Allison. 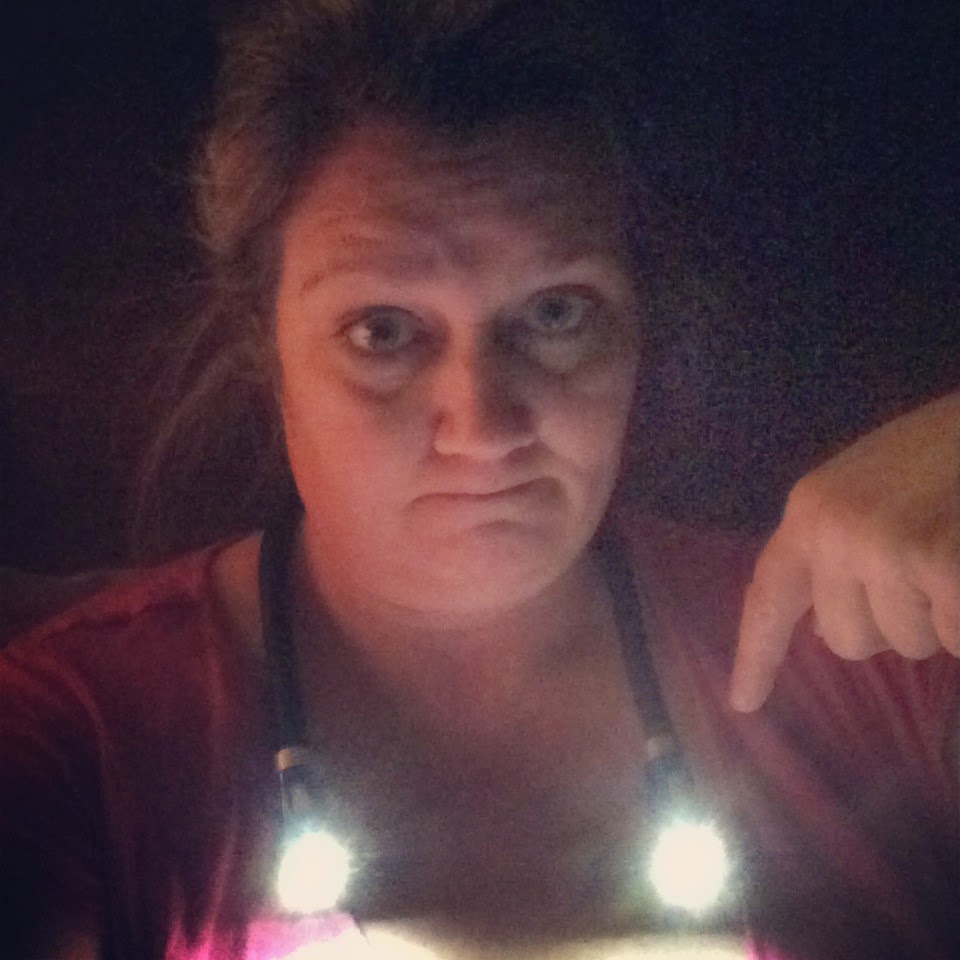 Gabbi absolutely LOVES wearing these fake teeth.  Almost as much as she loves to wear fake glasses.  What's up with that?! 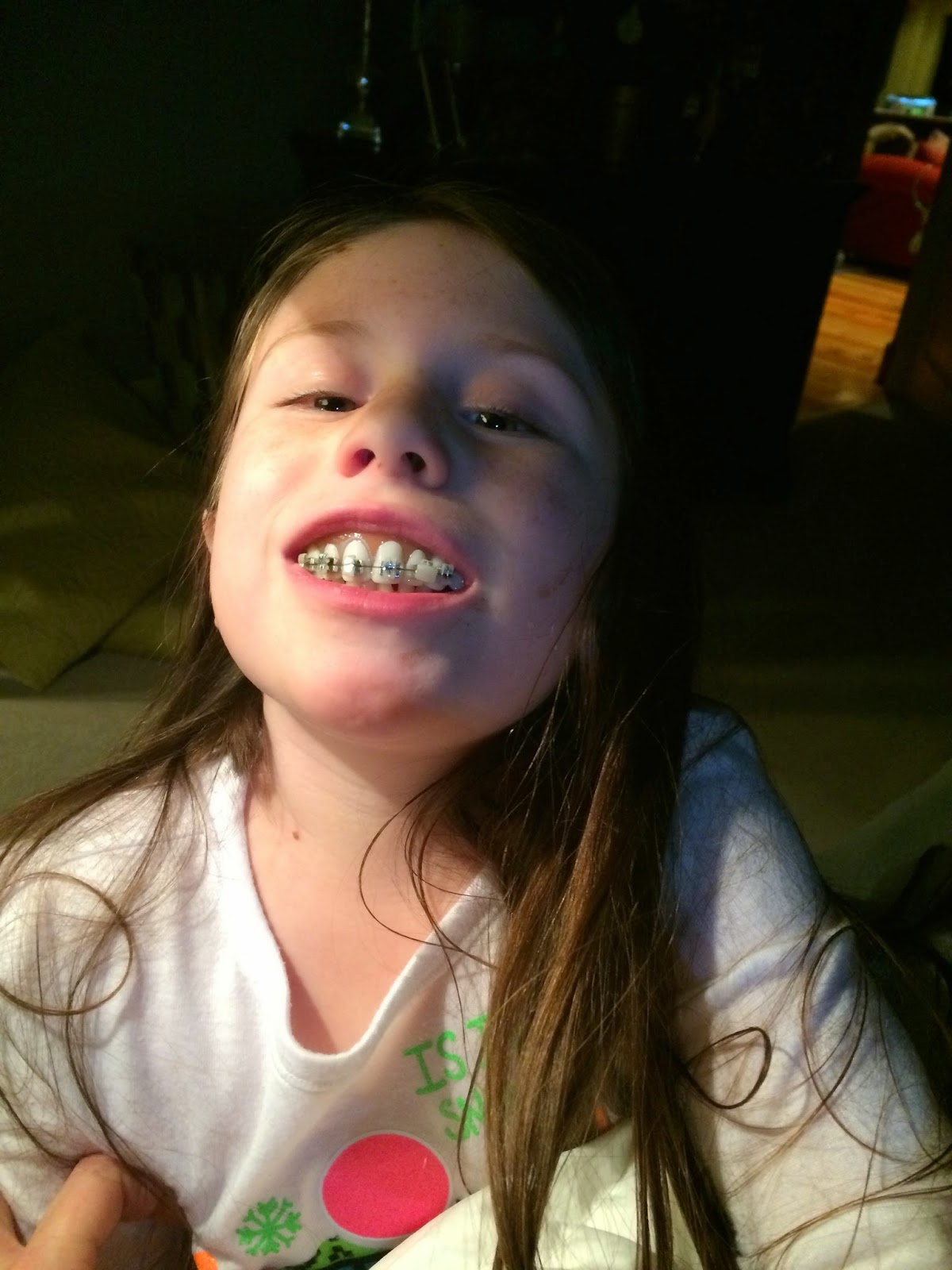 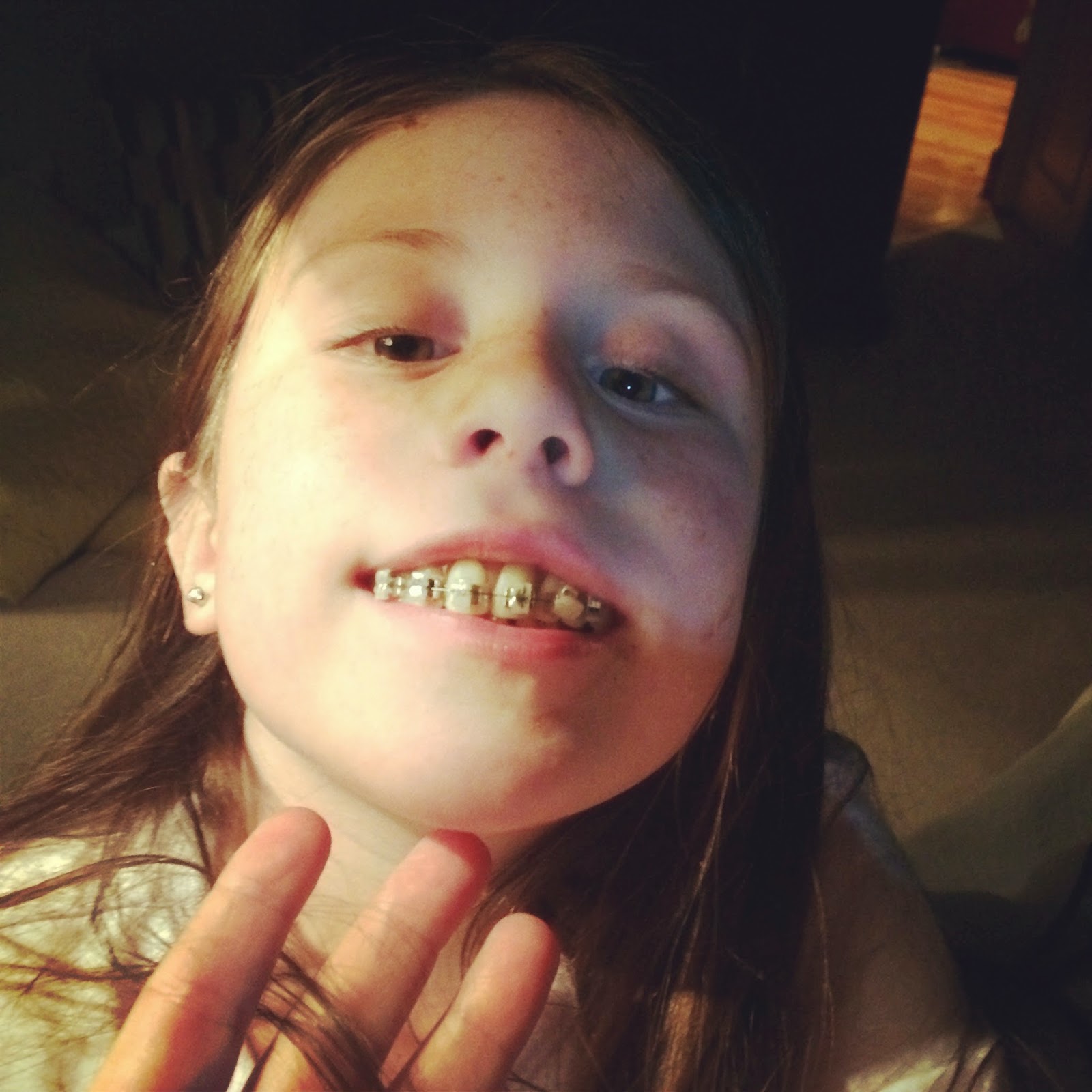 I'm gonna miss palling around with my mini me's.  This was at Night at the Museum at the movies.  I surely do staying up late, not having to worry about them getting up early, being free to meet them for lunch midday, and just palling around with them during the day. 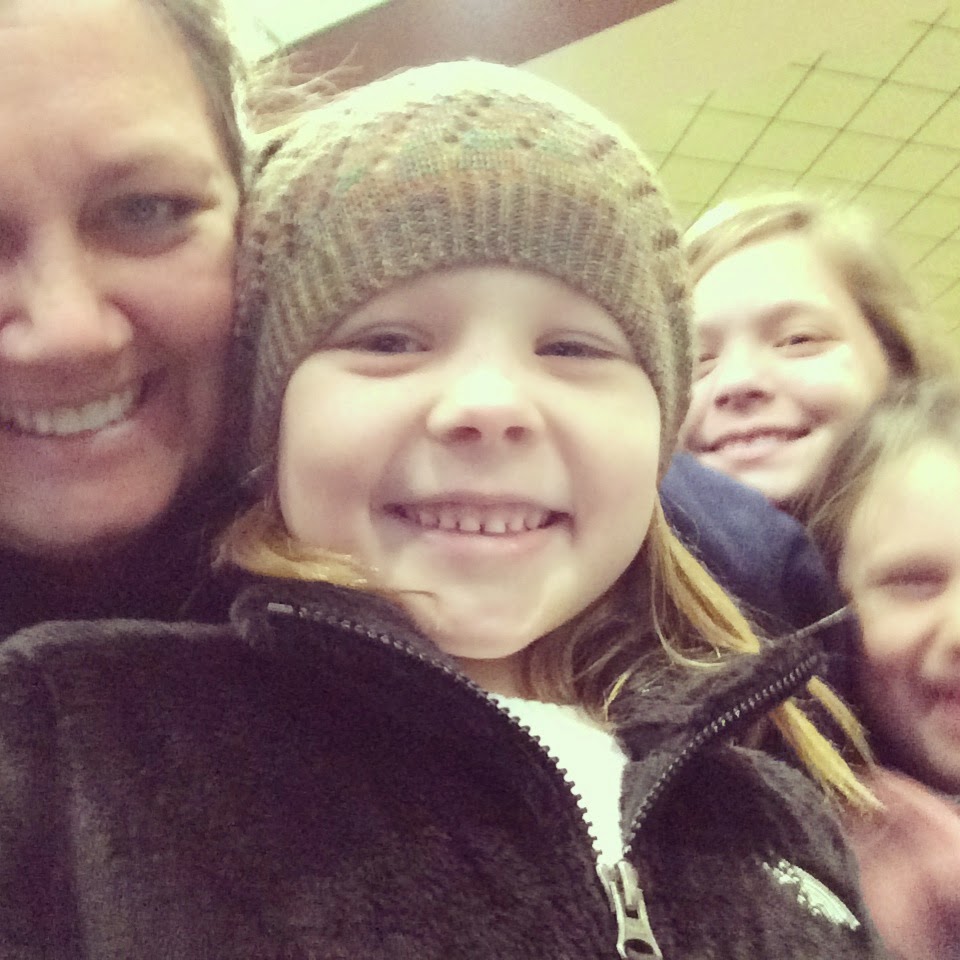 Aww, Buster is adorable! (That name fits him). Love the MMPT sign, I got up and I'm going to change mine!
I always enjoy the random posts the most.

Loving your random posts and all the 'goodies' contained within. Really happy to see you back blogging also.
Great word of the year for you. I really think you will find many ways to live it. Like I told you on FB my word is Grow/Growth this year. With sickness hitting most of the other members in my house it's given me some downtime to work on my goals and think about what the word means to me.
I've loved hearing you talk about your planner and all the great quotes you've been posting (and pinning). So inspiring.
Looks like Todd has a future cooking buddy. I'm sure he'll love teaching her all his 'secrets'.
Sounds like your house is a lot like mine. School starts back for the kids tomorrow and it'll help me get the back in order ( that is if Charles gets to feeling better and if the negative temperatures and predicted snow doesn't hinder going to school). The other 'problem' is I got five new books for Christmas (including two John Maxwell books) that are calling my name waiting to be read. Decisions, decisions!

Woooo hoooo!!! Which JM books did you get?!

Thinking For a Change and The 15 Invaluable Laws of Growth

Email me your address and I'll send you a surprise to go with your 15 Laws book!

Love random posts! Your family exudes love and happiness! I have read Man's Search For Meaning. It is a deep dive but very much worth it! MAnn's inhumanity to man is crushingly heartbreaking, but the human soul's ability to rise above is so inspiring and hopeful! ATTITUDE ATTITUDE ATTITUDE!