What a week! Gabbi is back in kindergarten.

Wait.  Let me preface this by saying, I wasn't sure I made the best decision last year by letting Gabbi start kindergarten as a 4 year old.  I knew she was young, but well... I had several reasons I made that particular decision.  First, kindergarten is free, so I'd save a little money.  Second, I could drop the kids both off at one place in the morning vs two.  Neither of those things were THAT big a deal, but they were cumulatively adding up to the reason I made my decision for kindergarten for Gabs.  And... I figured we could just repeat kindergarten and have a "meatier" start than to do pre-K and then Kindergarten.  I prepped Gabbi constantly last year that we'd probably want to do kindergarten a second time. And then her kindergarten graduation came.  I wondered if I should skip it and not make a big deal out of it, since I figured we'd do it again the next year and let the graduation be a really big thing.  Summer trudged along, and I was constantly dropping hints to her that she'd be back in kindergarten, and I wondered which teacher she'd get this time, and I wonder what new friends she'd make, etc etc. 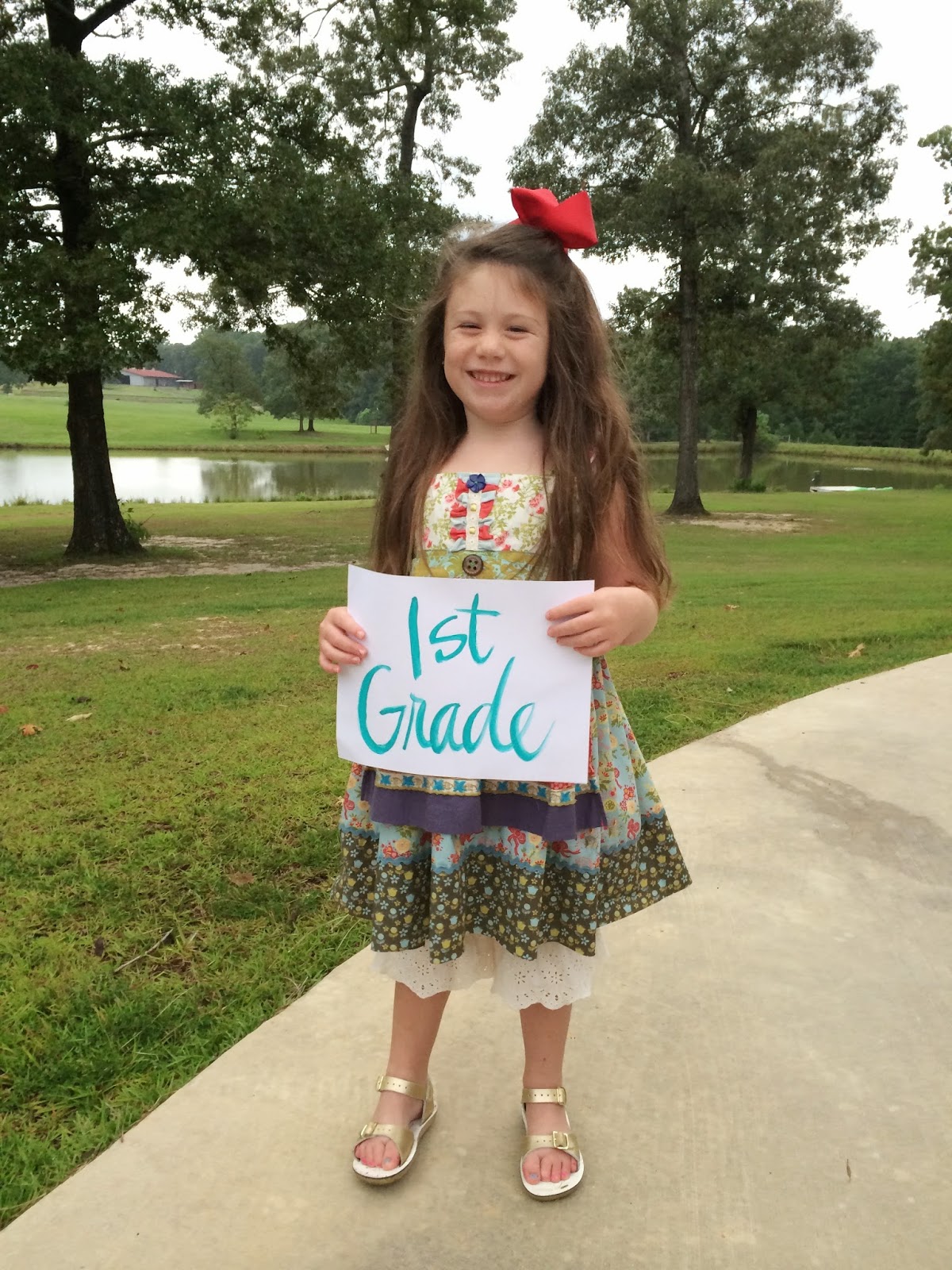 All along, Todd thought the best thing to do might be to go on to first and repeat first.  We KNEW that with an August 26th bday, she'd likely be repeating something, and first would probably be the one.  My mama taught first grade for 20 years or something like that, and Staci is a kindergarten teacher, and they both thought that first would be the best thing too, since she did well in kindergarten, and a year of practice in first would only be helpful in the long run.  And so.... 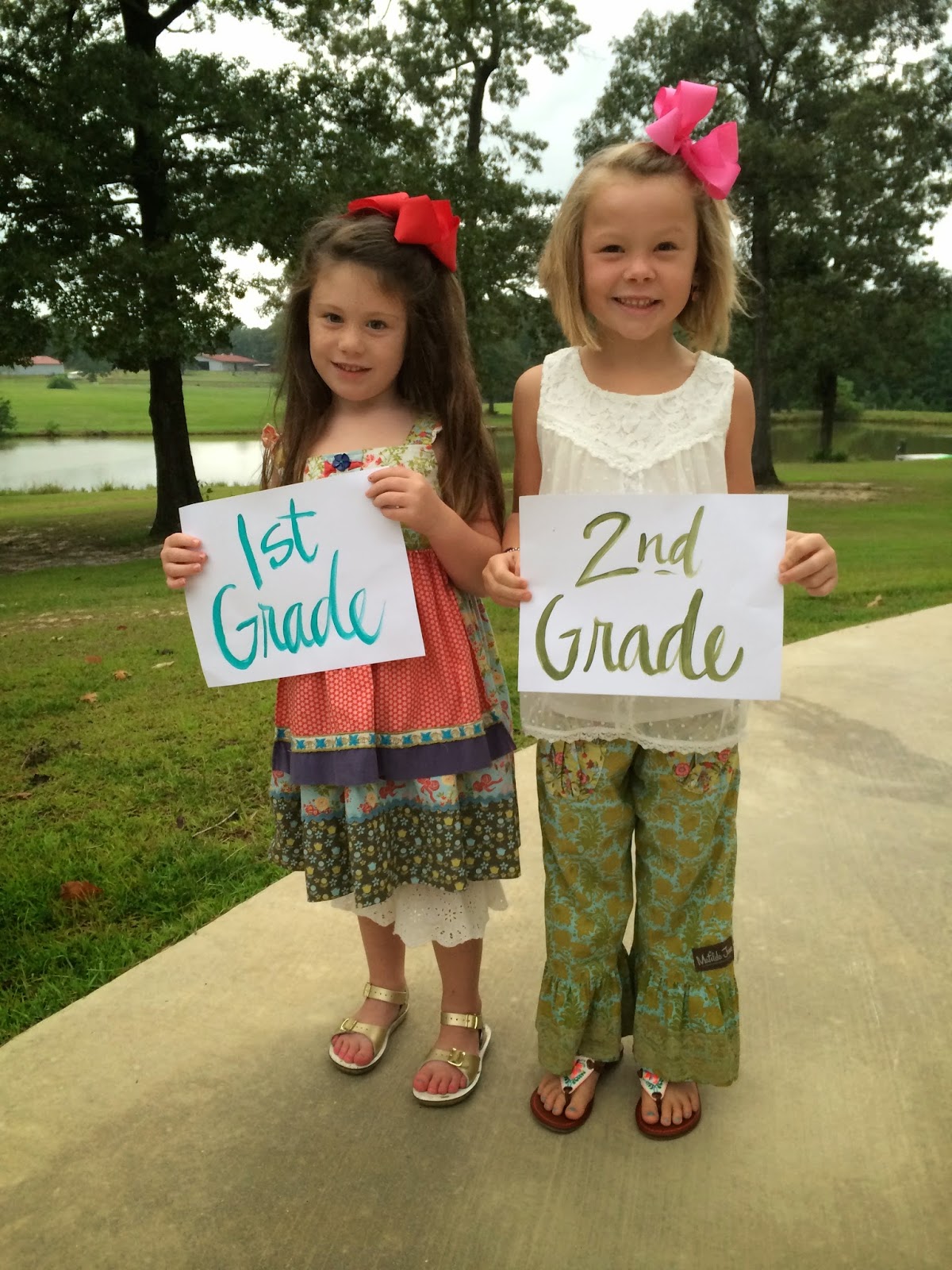 There we were... heading off to 1st and 2nd grade! 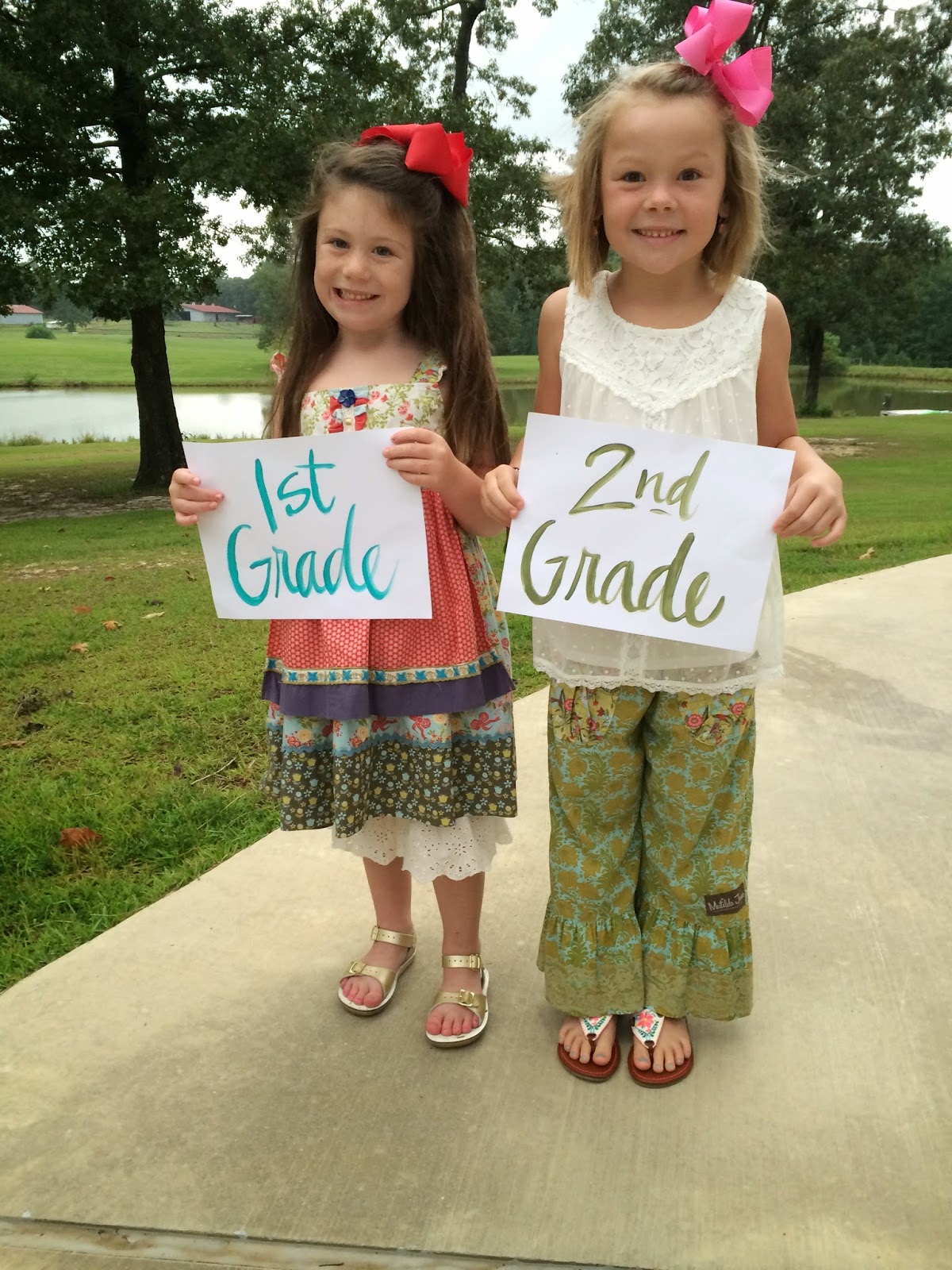 Week one.  No big thang.  Week two.  No complaints.  Except homework.  Week three... a big spider bite on her leg over the weekend, and Monday morning came around and she was nauseated and had a headache.  The school nurse calls me and says she might need to go home.  I suggest she see if it gets any better.  By the time the nurse was able to go back to her classroom to check on her bite, Gabbi is complaining again of nausea.  DeeDee goes to school to pick her up. 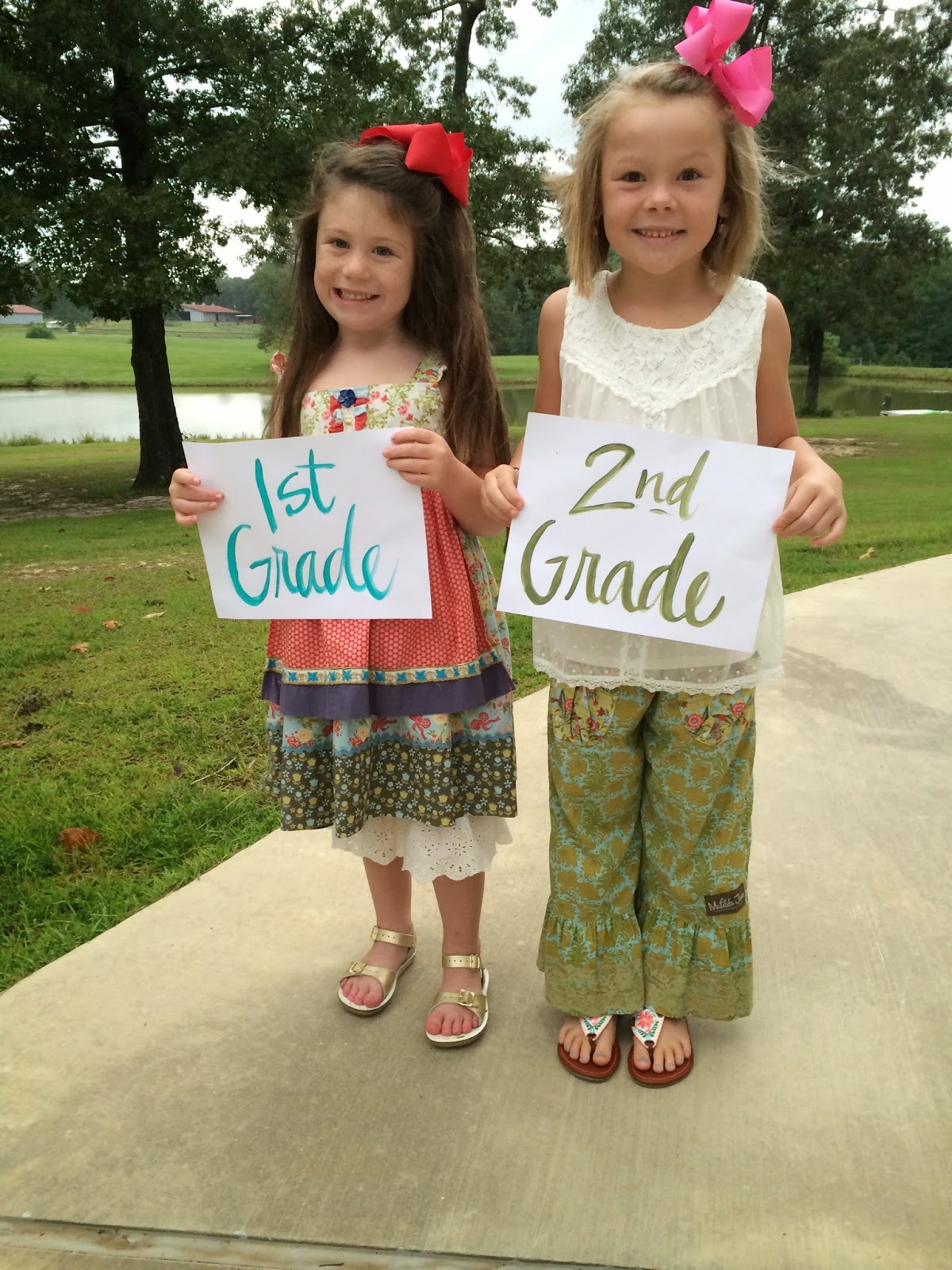 Next day, Gabbi is having nausea and headache again, and I am thinking it is that dad gum bug bite!! I schedule an appointment with her pediatrician and check her out.  The bite looked pretty horrible, by the way.  Not just your typical bite! Next day, bite looks better, but Gabs is in hysterics about going to school!  DOES NOT LIKE FIRST GRADE.  DOES NOT LIKE SCHOOL.  WANT TO BE IN KINDERGARTEN.  IT'S TOO HARD IN FIRST GRADE.  What the what?!  Who knew?!  She'd not even let on to me until this point.  Luckily, my mom and Gabbi's teacher are great friends, and I've known her forever, so we have a good relationship.  She let Gabbi sit with a kindergarten class that day and try it out.  Gabbi seemed to love it. 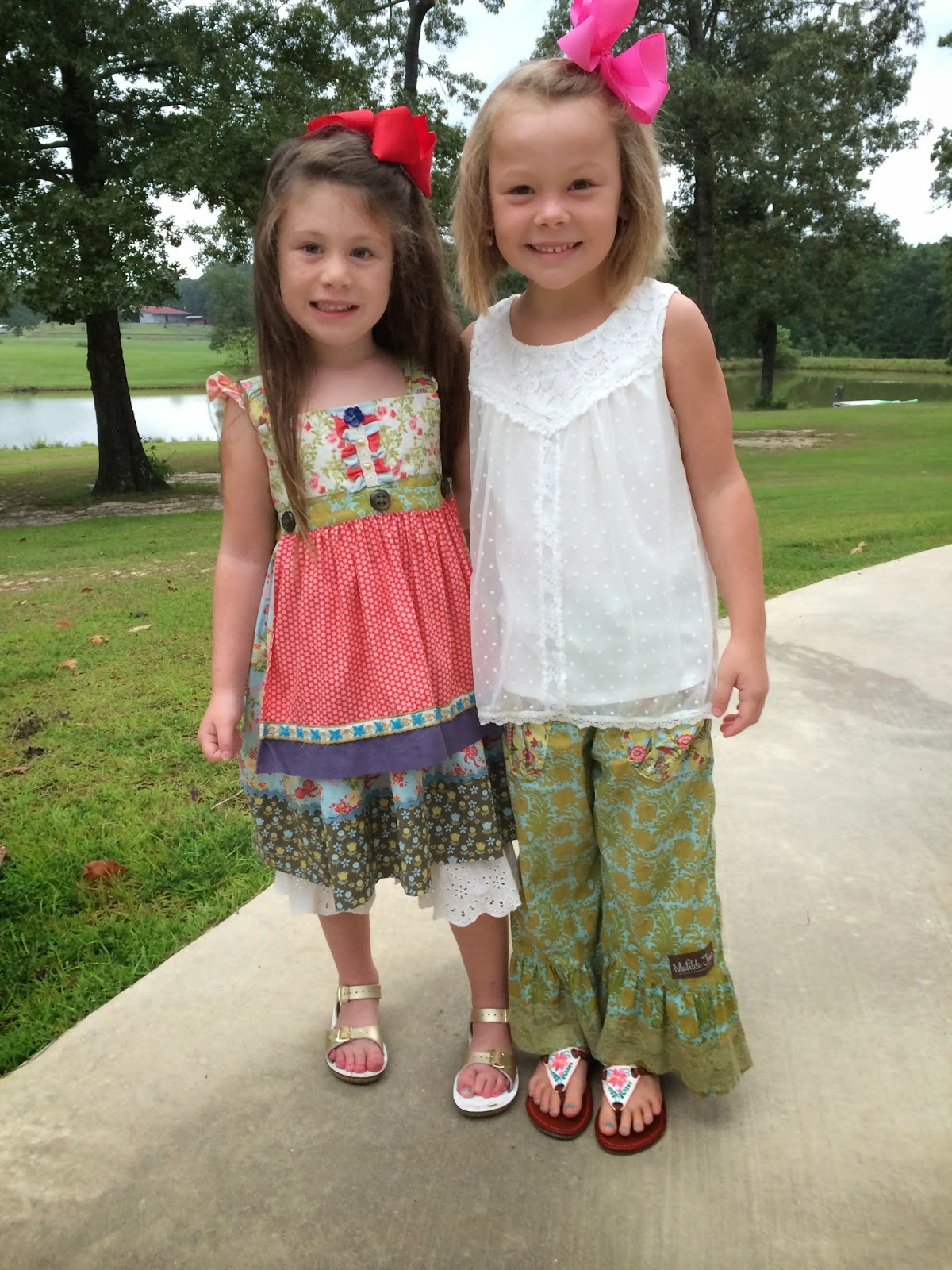 She was up and at em on the next morning, singing a song she wrote about "I love school.  I love being in kindergarten... " and so forth.  Looked like we'd hit a home run! 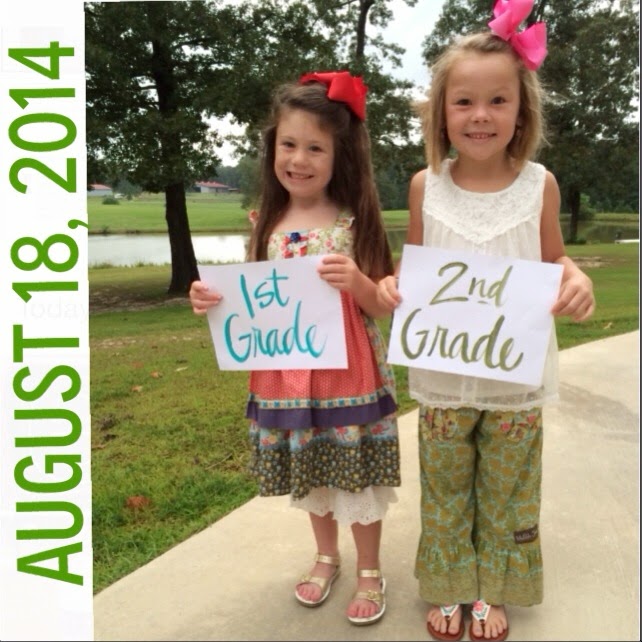 And so it is.  Gabbi is back in kindergarten.  Tonight, she is again complaining that she doesn't like school.  She says she doesn't know anybody in her class.  So if you will, say a little prayer for Gabbi tonight.  Pray that she makes friends, loves her teacher, and that we are making the right decision over all.  I think Gabbi's maturity level dictates that this is the right place for her right now.  Many of you have supported my decision on Facebook and Instagram, and I so appreciate that.  Really!!  I know for SURE that she would've repeated first had we gone on with the year, so eventually, she would've ended up with the group she is with this year anyway... which might in fact, make it even better that she'll have an extra year to get to know them. 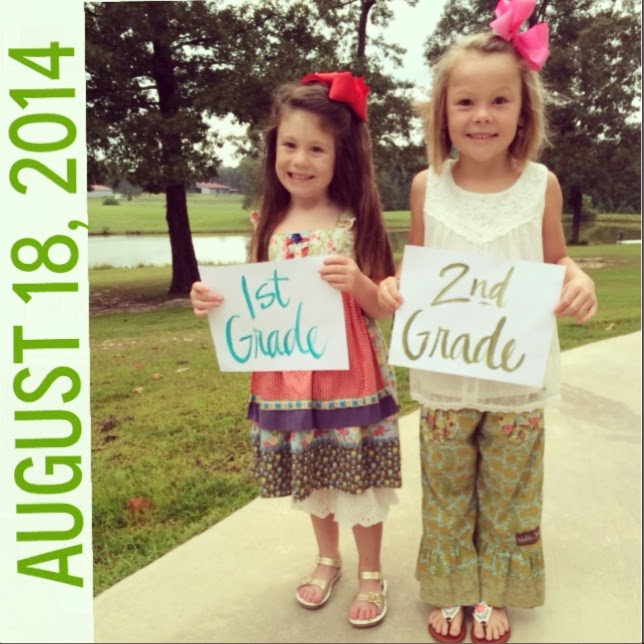 But what she is not wanting to go to school again is beyond me.  Here in Louisiana, the kids are tested for DBELS (or something like that) to see what level they are at prior to the school year beginning.  Gabbi did fairly well per her first grade teacher.  It seems to be more of a maturity thing, whereas the pace is a bit too fast, and the responsibility required to change their books and work on their own in their journals and such was just too much for my baby right now.  Ellie is rocking second grade, and I think the TWO years between them in school might actually be a good thing in the long run.  Ellie is a CHARGER.  Gabbi is a LINGERER.  As a student of people and their strengths, I can almost pick what I think my kids' strengths will be as teens and adults, and believe me, they are polar opposites!  And both are fearfully and wonderfully made!  How blessed I am to get to parent them, each in their own uniqueness.

WOW.  Being a mama can be pretty hard!

That baby has had a tough few days, and I honestly believe it has caught up with her. I think she needs to hear from her mama and daddy that they understand that she has had some tough times, and that her parents are so very proud of her for being the best little Gabbi in the world! And, that kindy is the best place to be right now. Because, everyone has a job. Mom and Dad have jobs, and Ellie and Gabbi have jobs. Ellie and Gabbi have the same job - to go to school. It might be new and different, but it is their job, and so they get ready to go to their job every week day just like Mama and Daddy. And then, when they get home, they can all be together and love up on each other and talk about their day.

Yes, being a mom IS hard, sometimes!

Gabbi may require a longer adjustment period, but I'm sure she'll do just fine, with a little time. You're doing all the right things for her.

My youngest son went through a time when he was constantly complaining of one ailment or another, because he knew the school nurse would call me to pick him up. His issue was different, though. He decided he didn't like to do school work, and thought being at home would be much more fun...the little stinker!

Once I realized what was happening, I came up with a plan. I told him that he could come home, but - since he was "sick" - he would have to stay in bed the rest of the day. I made him get in bed and stay there...no toys, no TV, no spicy or sweet treats. Chicken noodle soup and toast only, to "settle his stomach." It was tough, but I stuck to my guns.

He only pulled that stunt one time, once I came up with that plan. After that, he decided school was much more fun, after all! ;-)

Hoping all is well this morning for Gabbi. I know y'all made the best decision for her.

Sounds like you guys have made the right decision for Sweet Gabbi! I'll definitely pray for her that the transition goes well. You're so smart to recognize the differences in your little sweethearts! No greater blessing than to be loved and celebrated as your own unique self, made by God!

Being a mom is so hard, we struggled with it for 3 1/2 years and finally made the decision and now our son is loving school and doing great in it. I always thought in Pre K we should put him in again but the teacher kept telling me is was ready. I look back and think I should of went with my motherly instincts. I still kick myself for that, but life goes on.

Gabbi will do great and will meet new friends soon, she seems like a sweet heart, plus she probably just wants to hang out with her cool mom.

When my son, who is now 24, started Kindergarten, he hated it. I would walk him in every morning and the teacher would have to pull him from around my legs. He would cry and cry. He hated school, especially nap time. Every day I would ask him if he wanted to walk in by himself. The answer was always no. Months past and one morning he said he wanted to walk in alone. I pulled up to the walkway and he got out. He slung his back pack over his back and took off toward the door. I CRIED!!

All we can do is love them. They don't come with instruction books.

She will be fine, bless her little heart. Momma will be too, it is just so hard when your little one is not happy. Hugs.

Kudos for doing the right thing for her!

Mo, you are a great Mom and know you made the best decision for Gabbi. She will flourish this year...just you wait and see!!! Good luck got both her and Ellie this year!!

great decision for Gabbi to go back and mature in Kindergarten. She will be with her peers then as she progresses on over the years. Our late birthday ones have flourished waiting the extra time.
PS- take a new pix

You are a fabulous mom and taking the cue from Gabbi and acting on it was the totally correct action I believe. You can't go wrong following her lead and your instincts. Both school and social relationships seem more and more complicated these days, so giving her time to mature I believe will only benefit her in the long run. The tough decision and adjustment time will be well worth it in the long run. A great mom makes the tough decisions and puts what is best for their child first and you are great! Lisa & Sami