Elile's first time on the slopes! 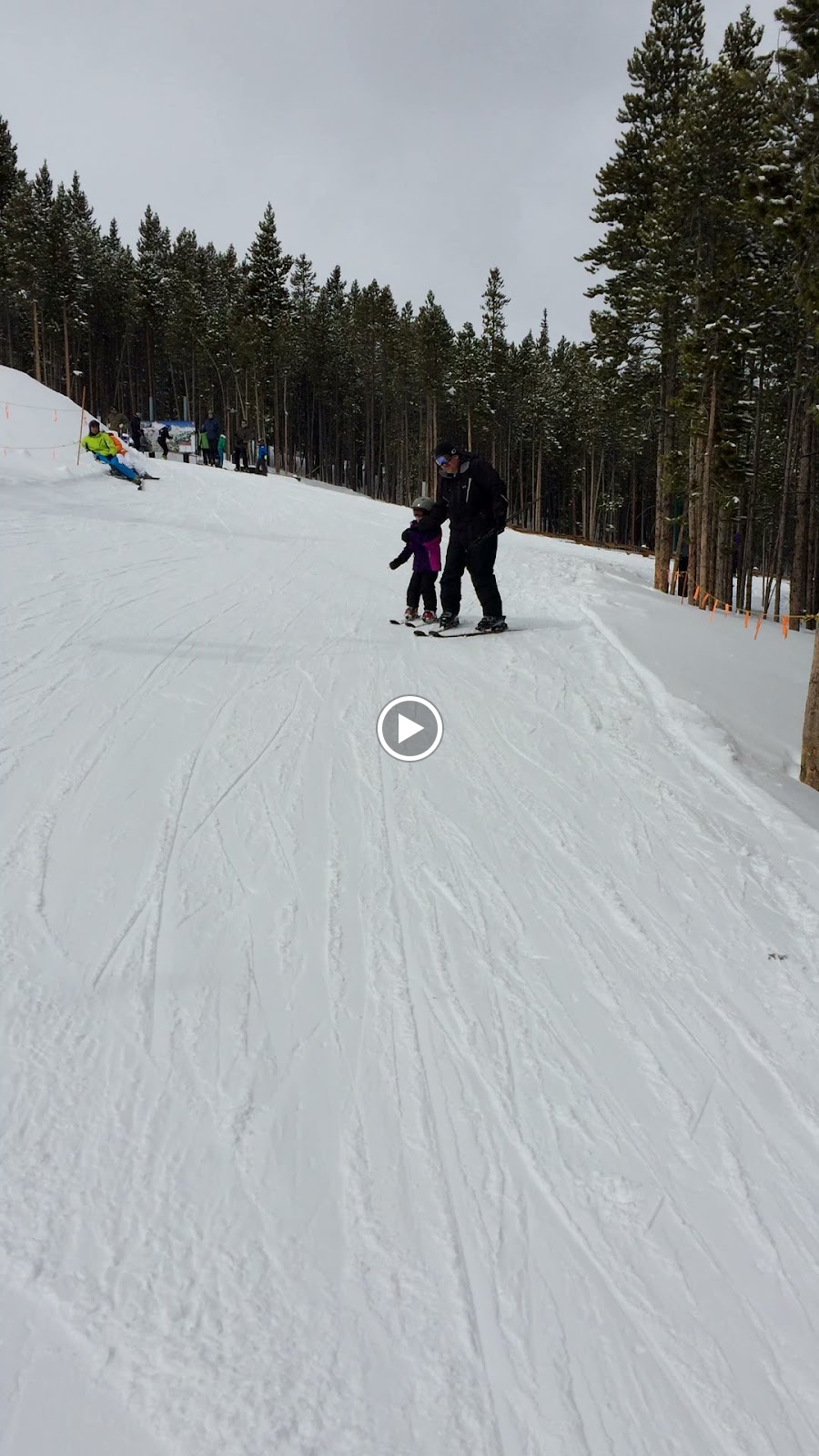 As usual with the videos, I have no idea whether or not the majority of you can actually play them.  But, I continue to try. 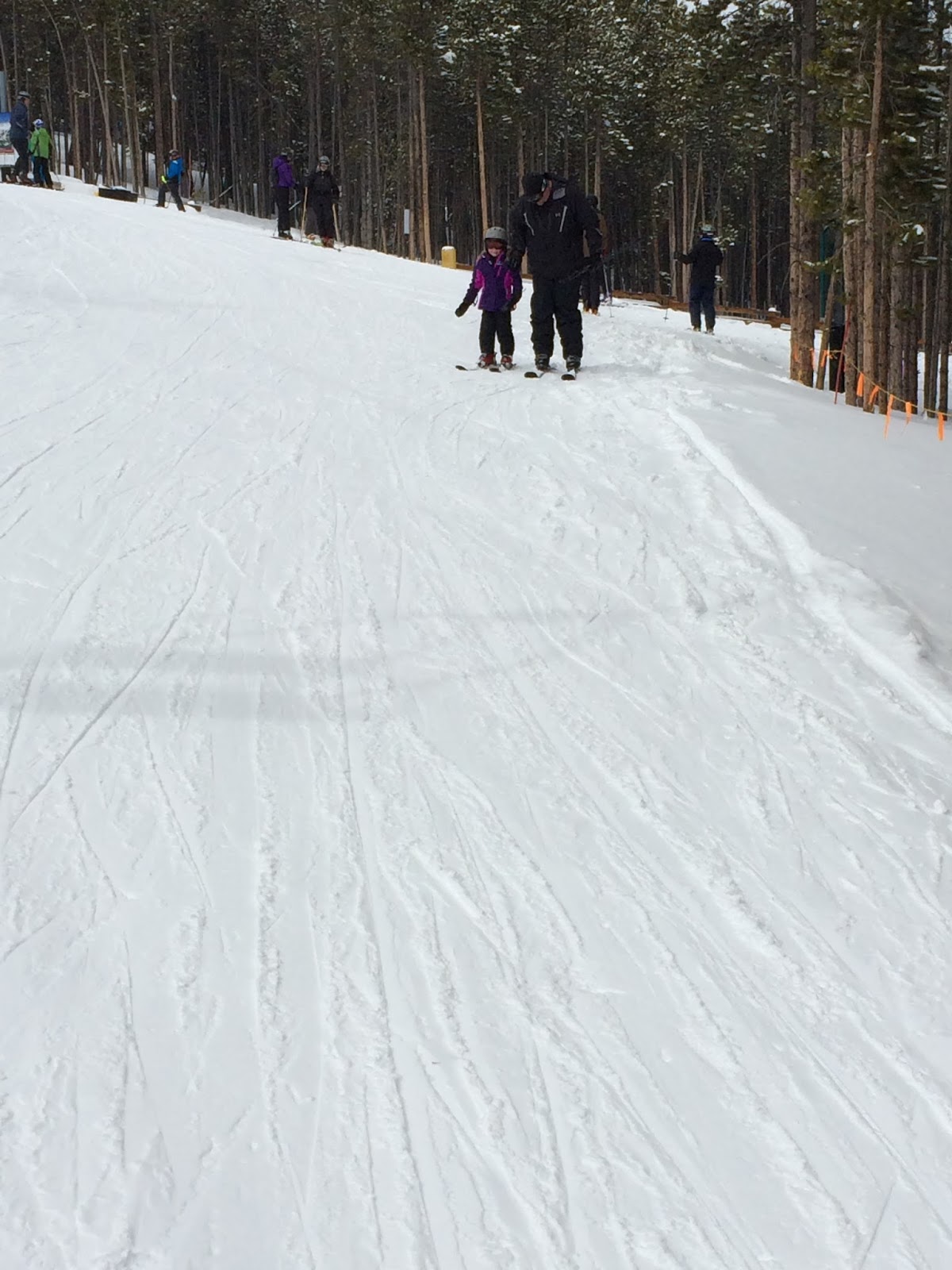 Trust me when I tell you that these first day videos are NO indication of how well this kid was actually skiing by the end of the second day!  But, this is the day I focused on Ellie's skiing.  The next day was all about Gabs. 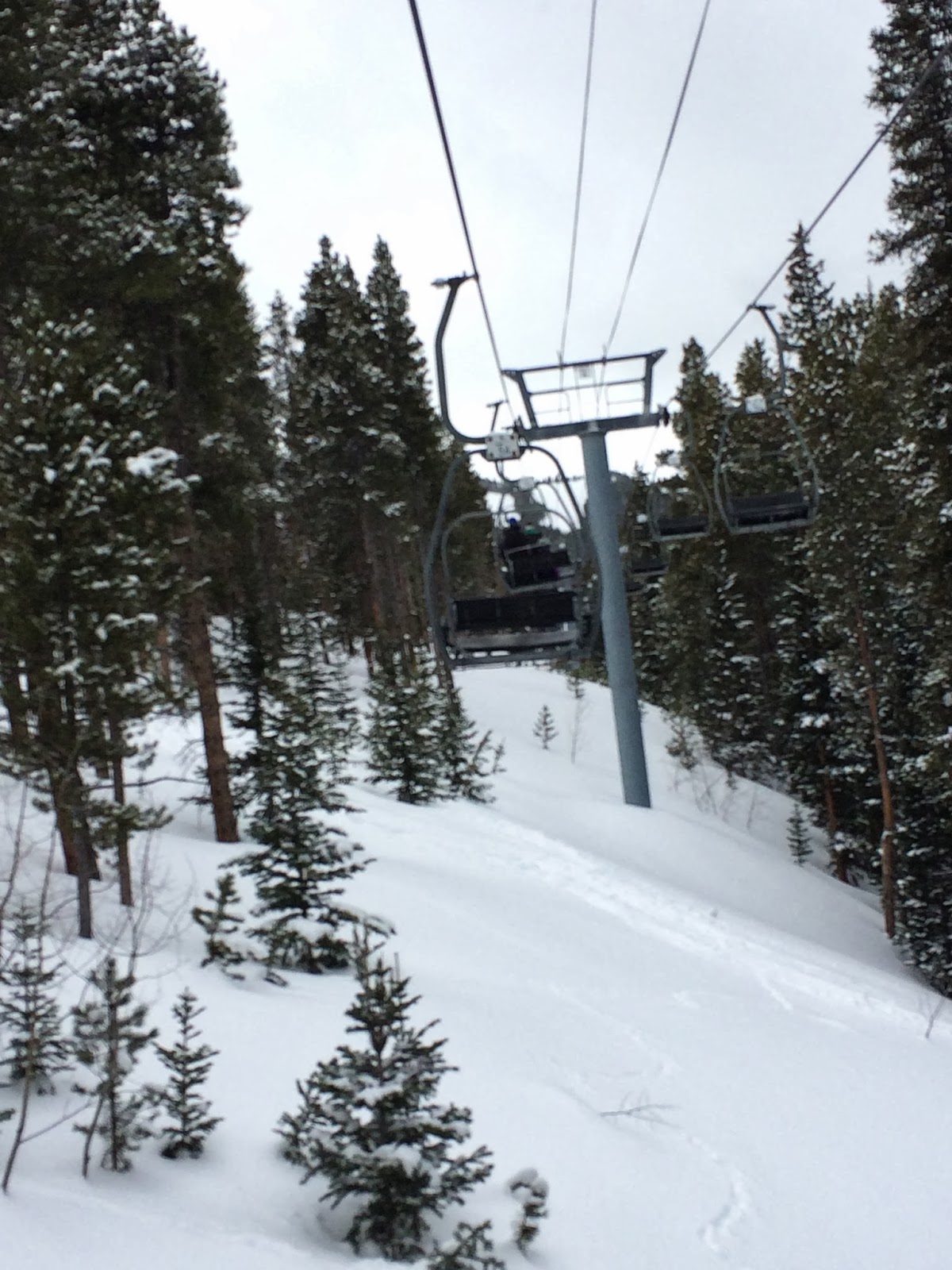 As previously mentioned, her daddy LOVES to ski!  So, naturally, he was a bit more than excited when she agreed to go on the mountain with him.  She'd had one measly day of Ski School, so my heart was about to pump out of my chest just thinking of her riding on that chair lift alone! 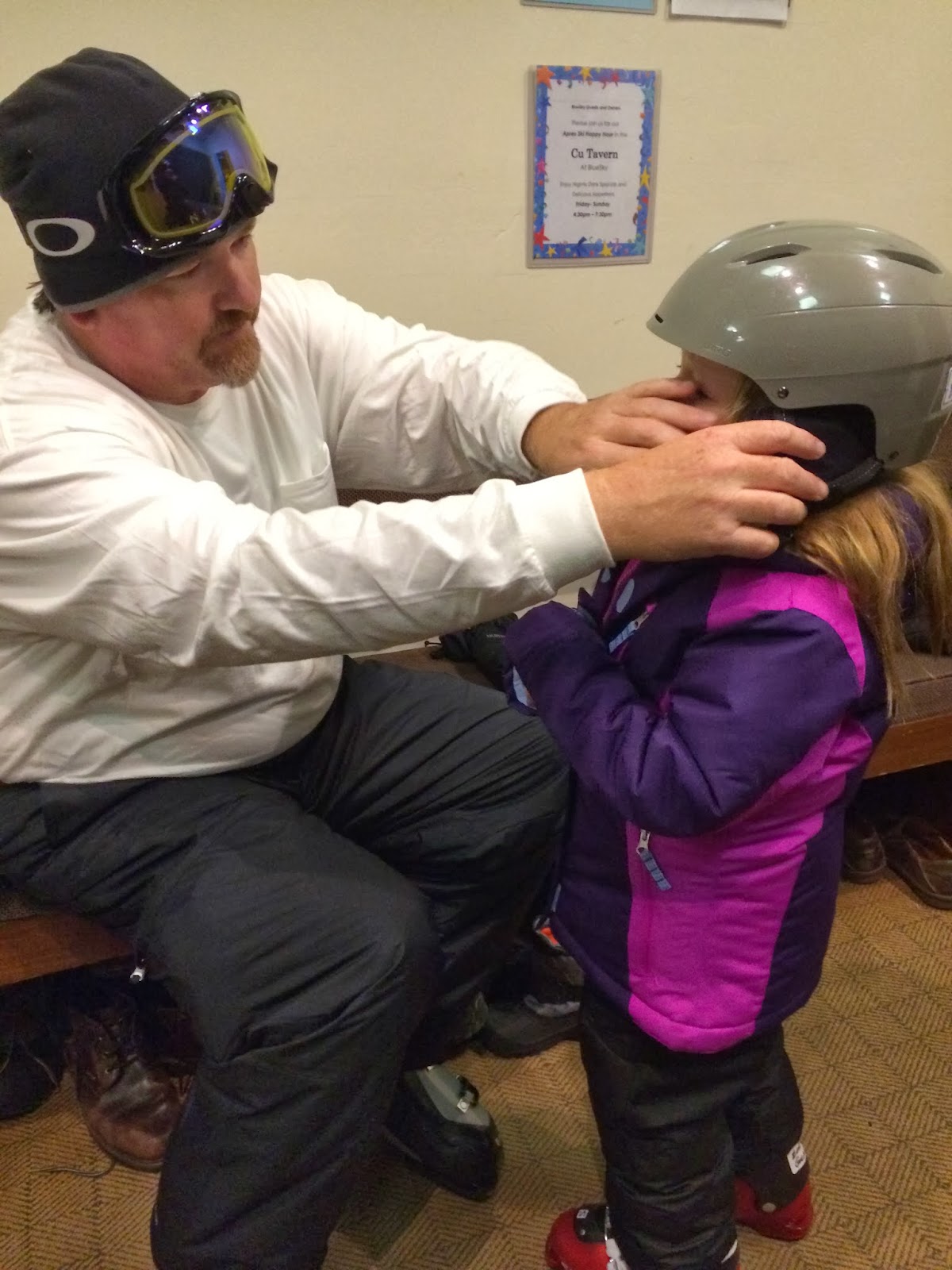 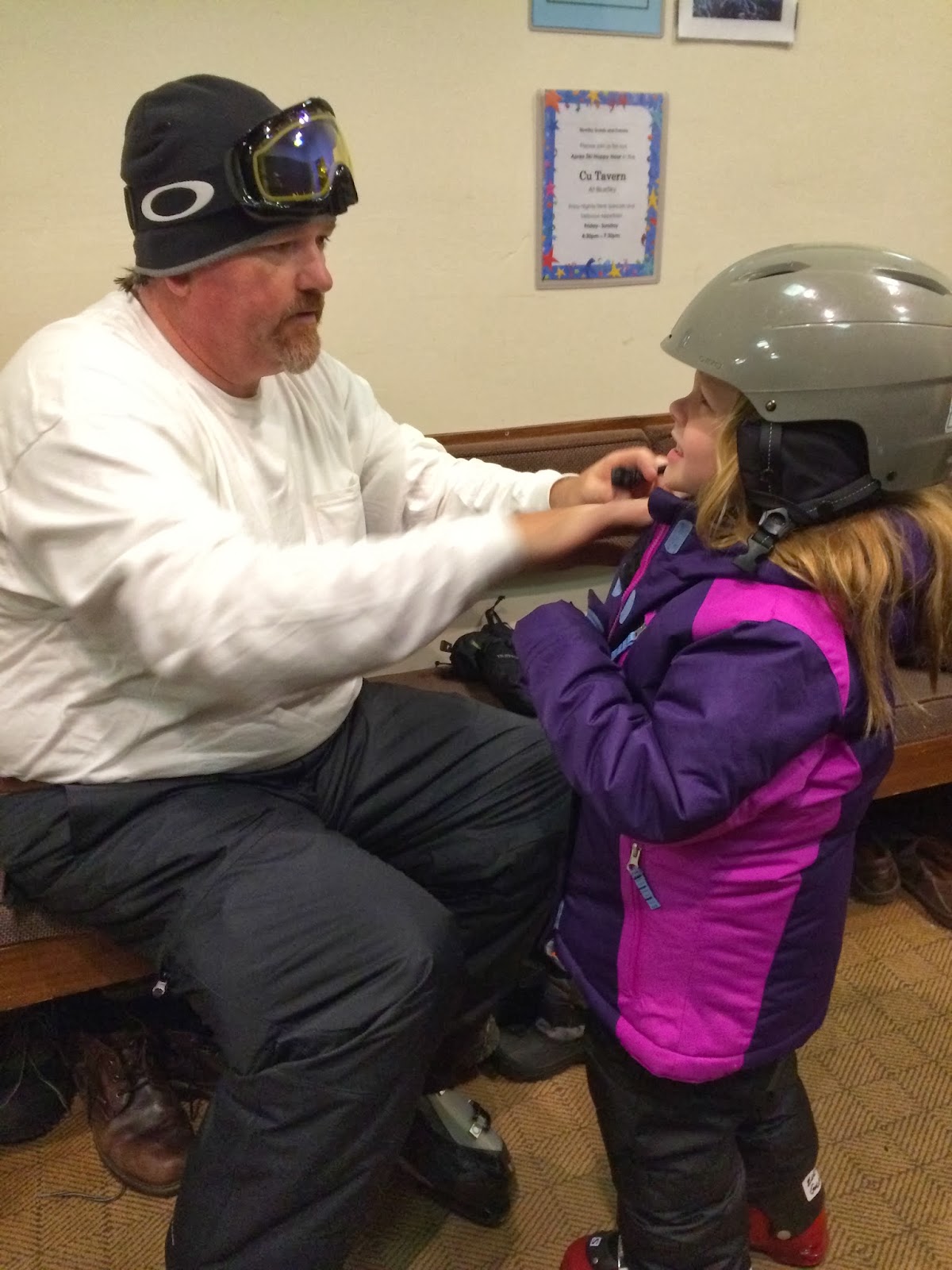 You gotta admit she looked the part!

And speaking of "looks"... my big girl is going through a little change lately, and I think she is just beautiful! 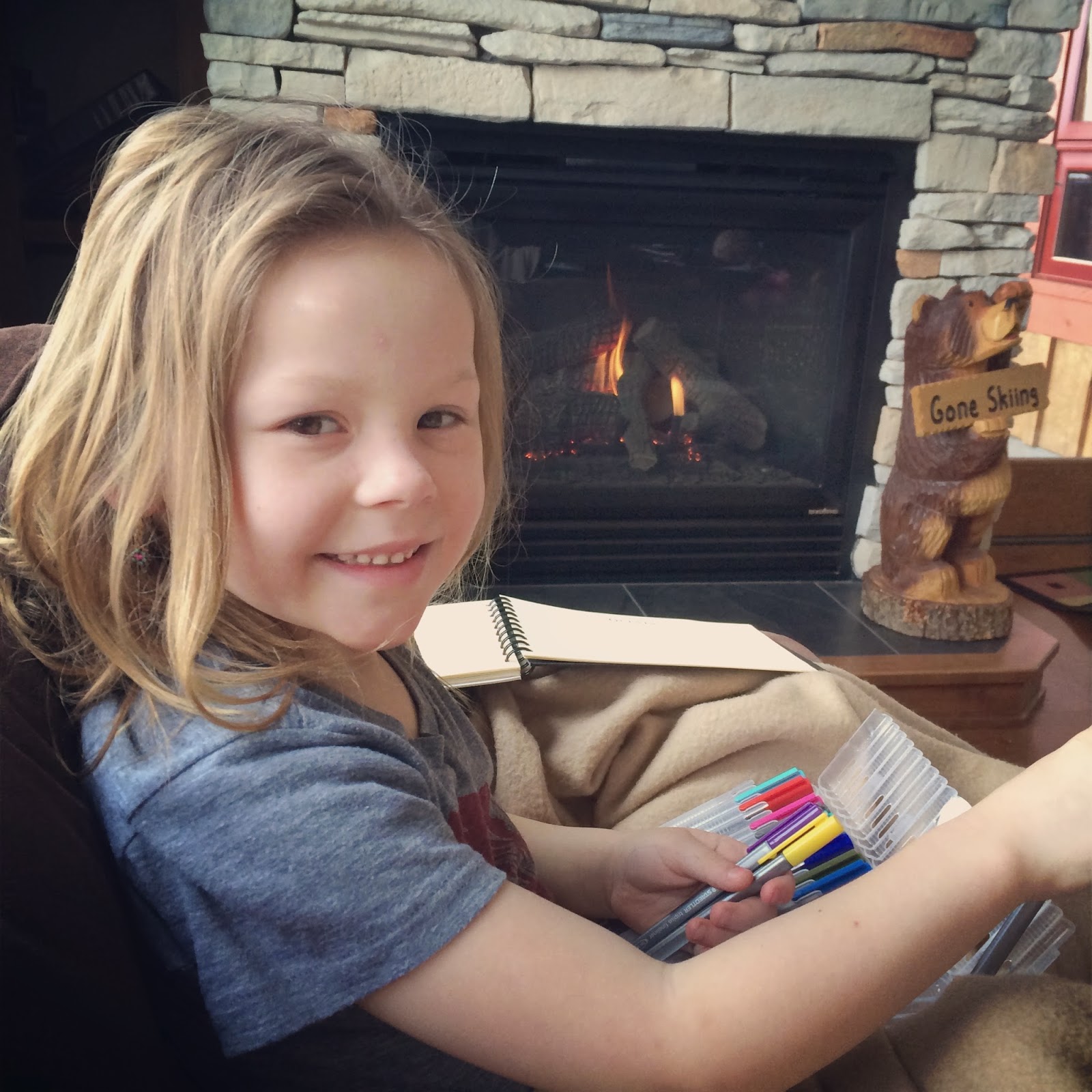 Back to the slopes.  We had no idea really where to start to get her on the skis and down the mountain. 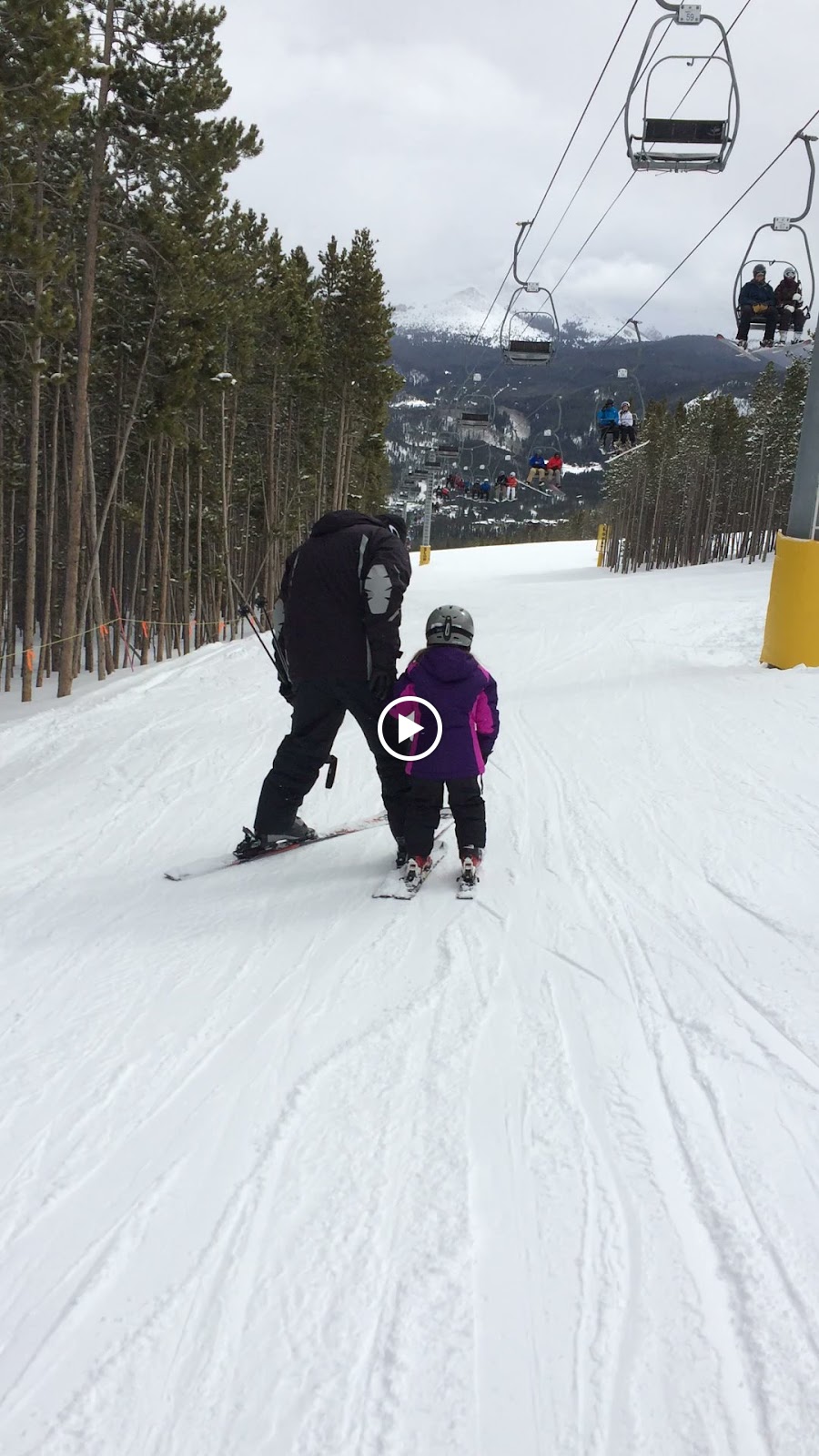 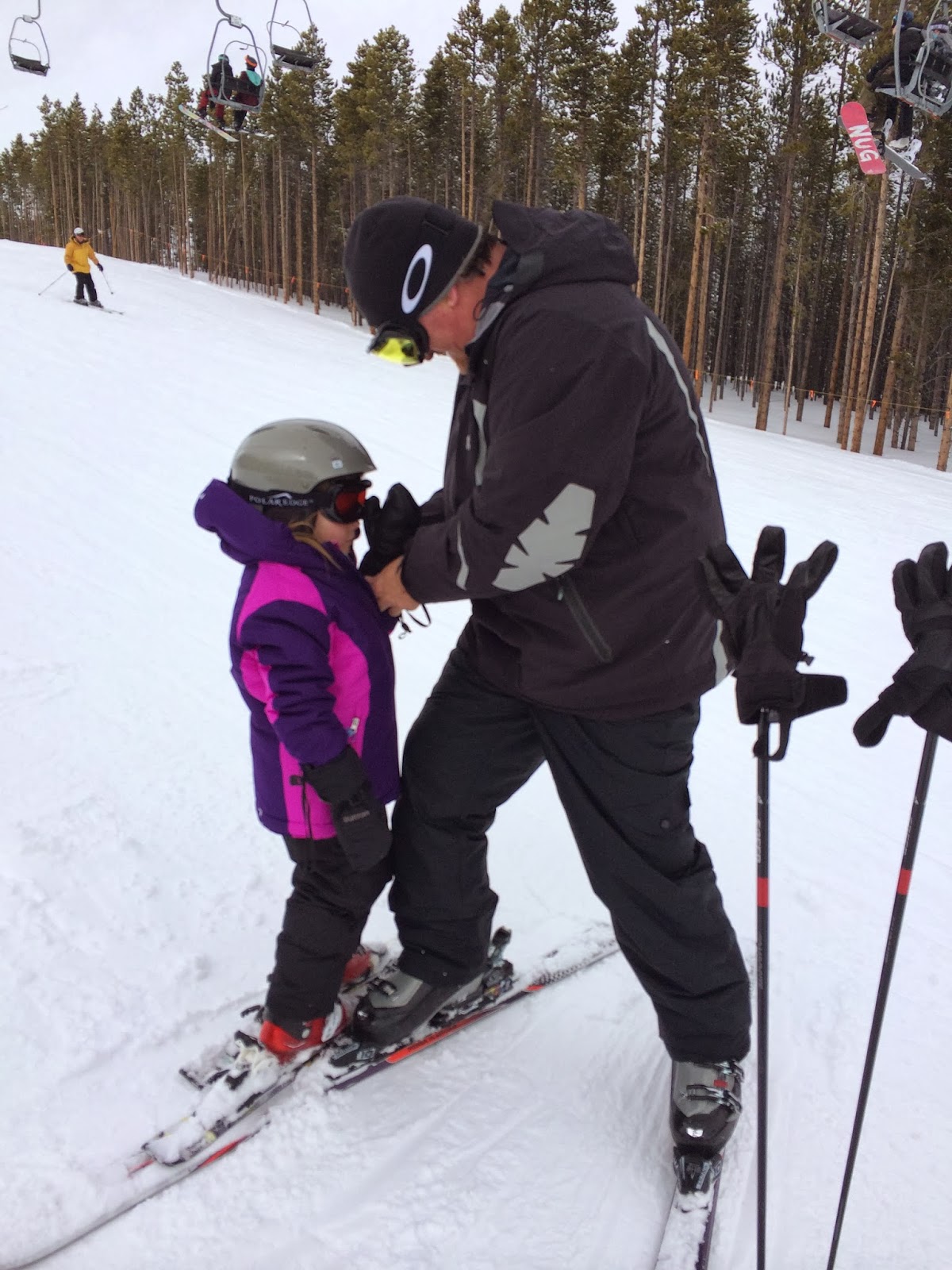 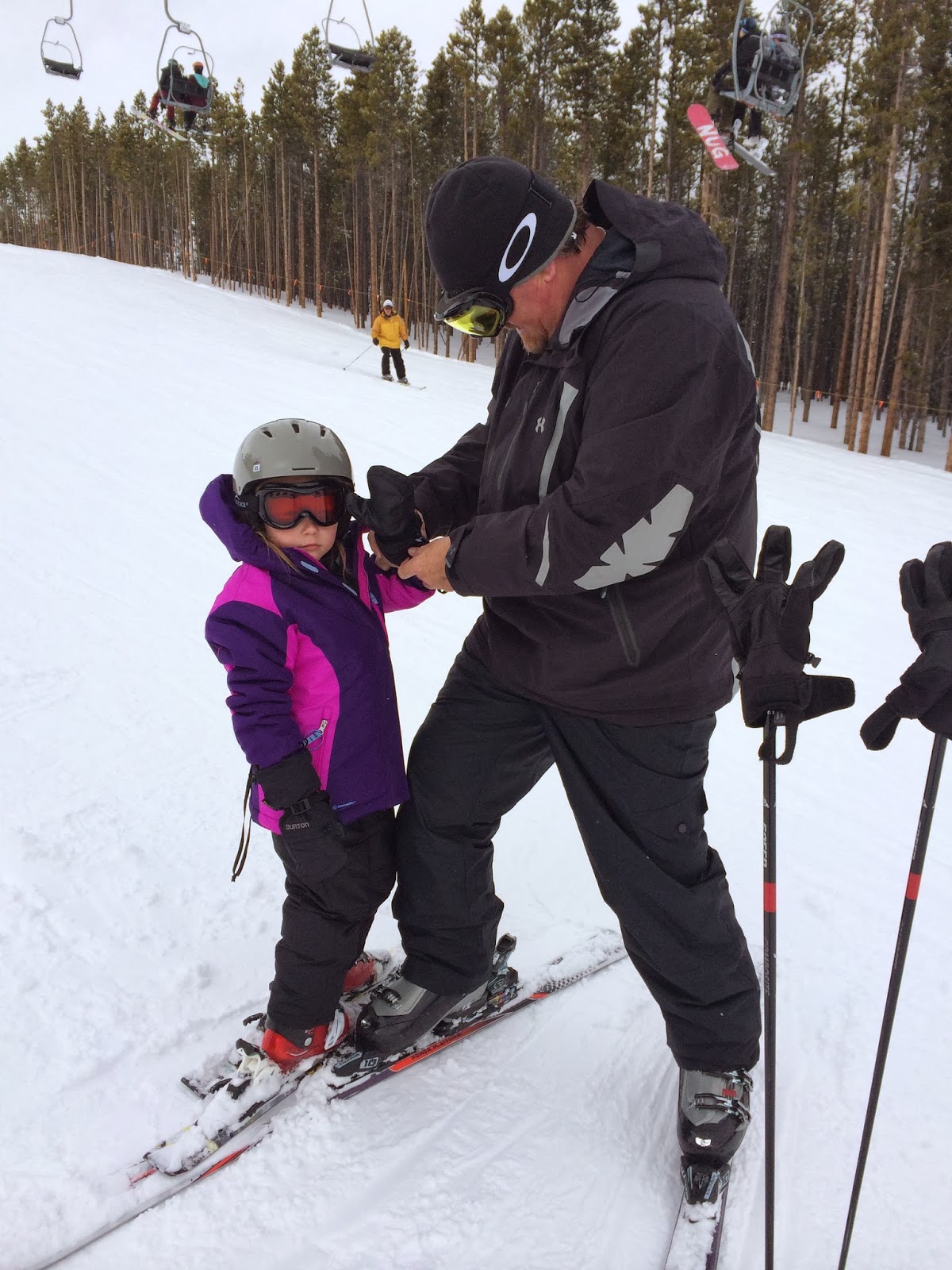 Finally, he just put her between his own skis, handed me his poles and headed south. 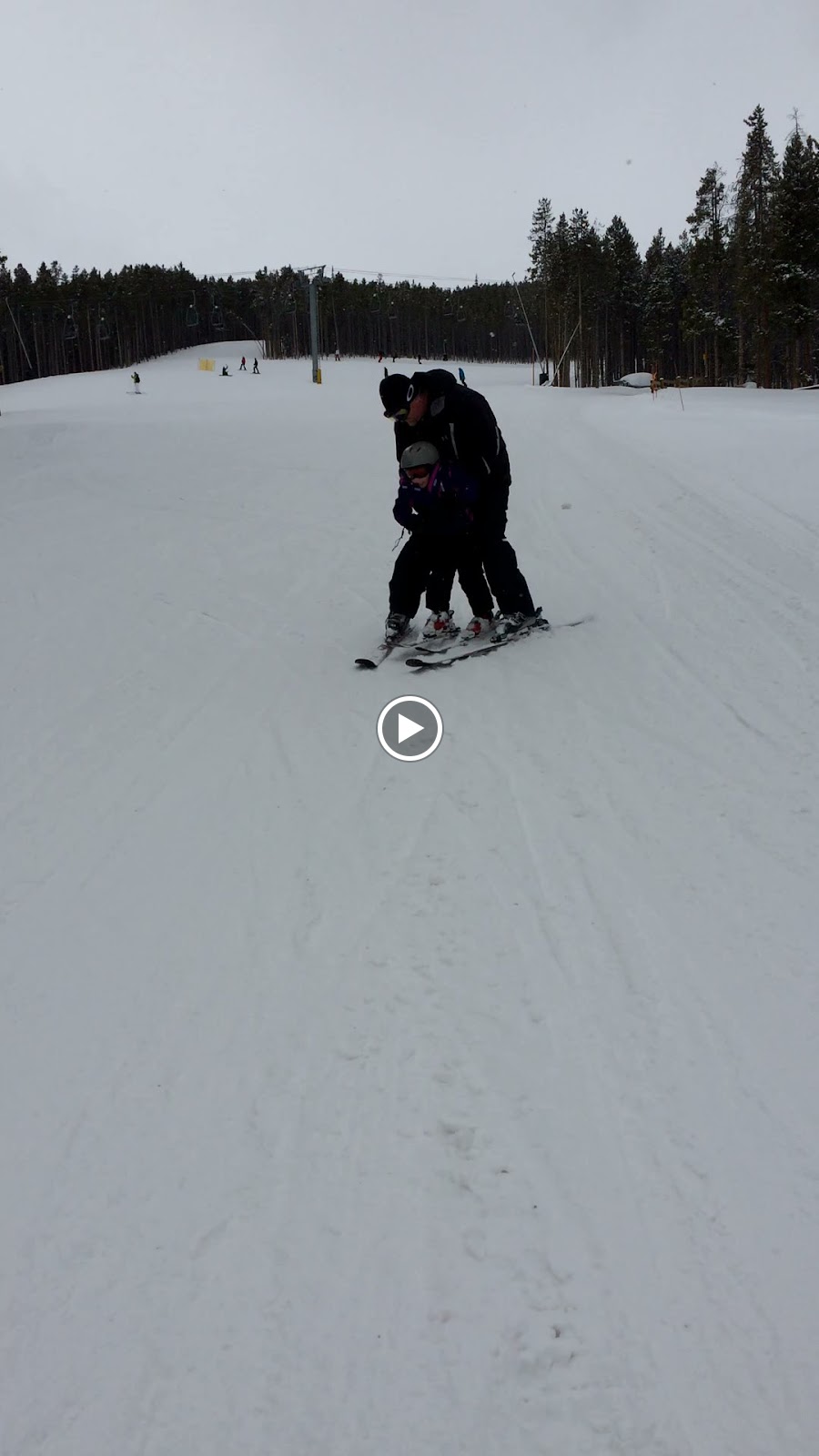 That seemed to be the ticket. 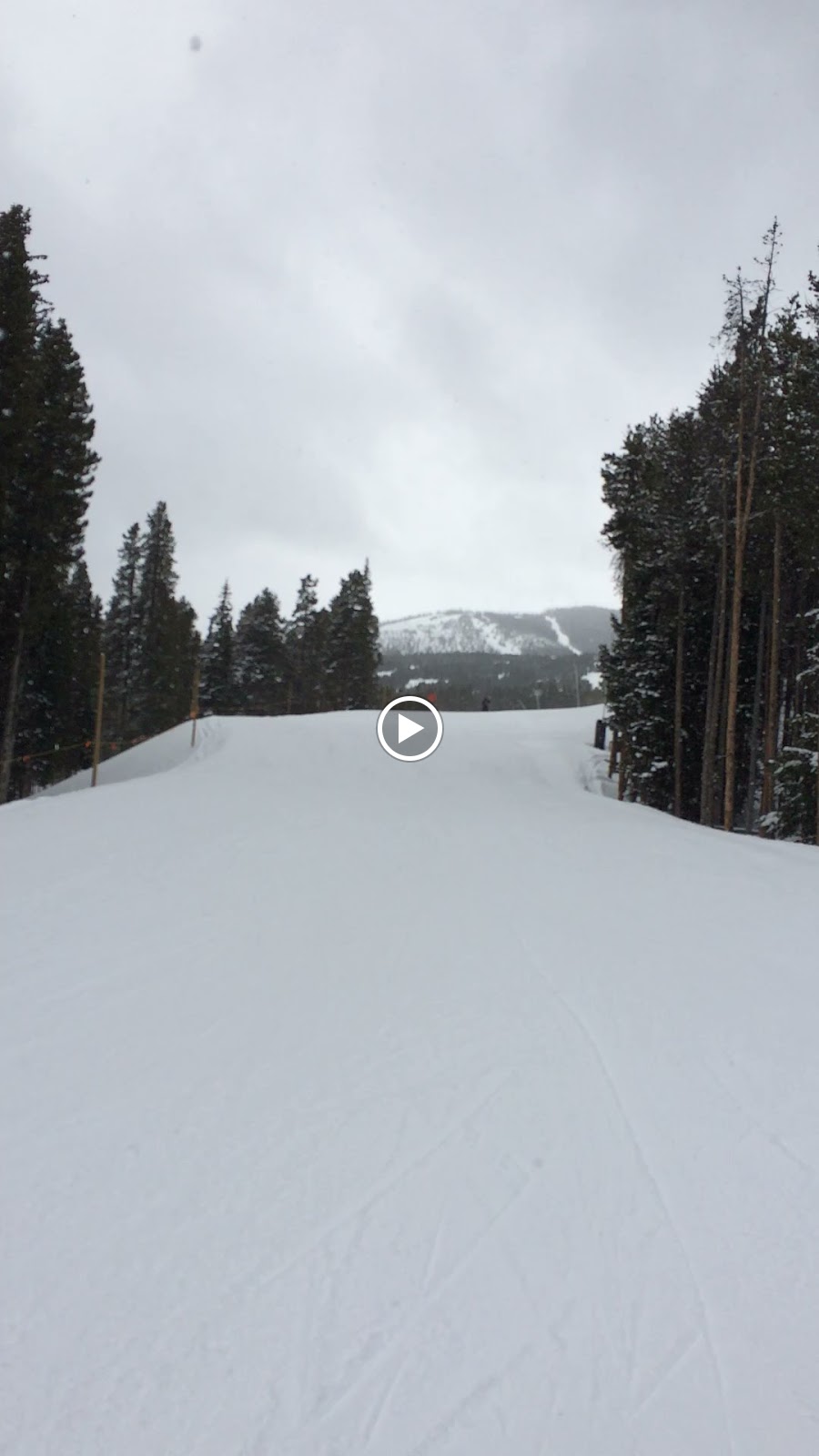 It also made Ellie feel safe, so she was gaining confidence.  But, the poor dude's back was KILLING him!!  He suffers with back issues from time to time, so I was afraid he was ruining his chances of continuing on the slopes by doing this.  I think it was a sacrifice he was willing to chance. 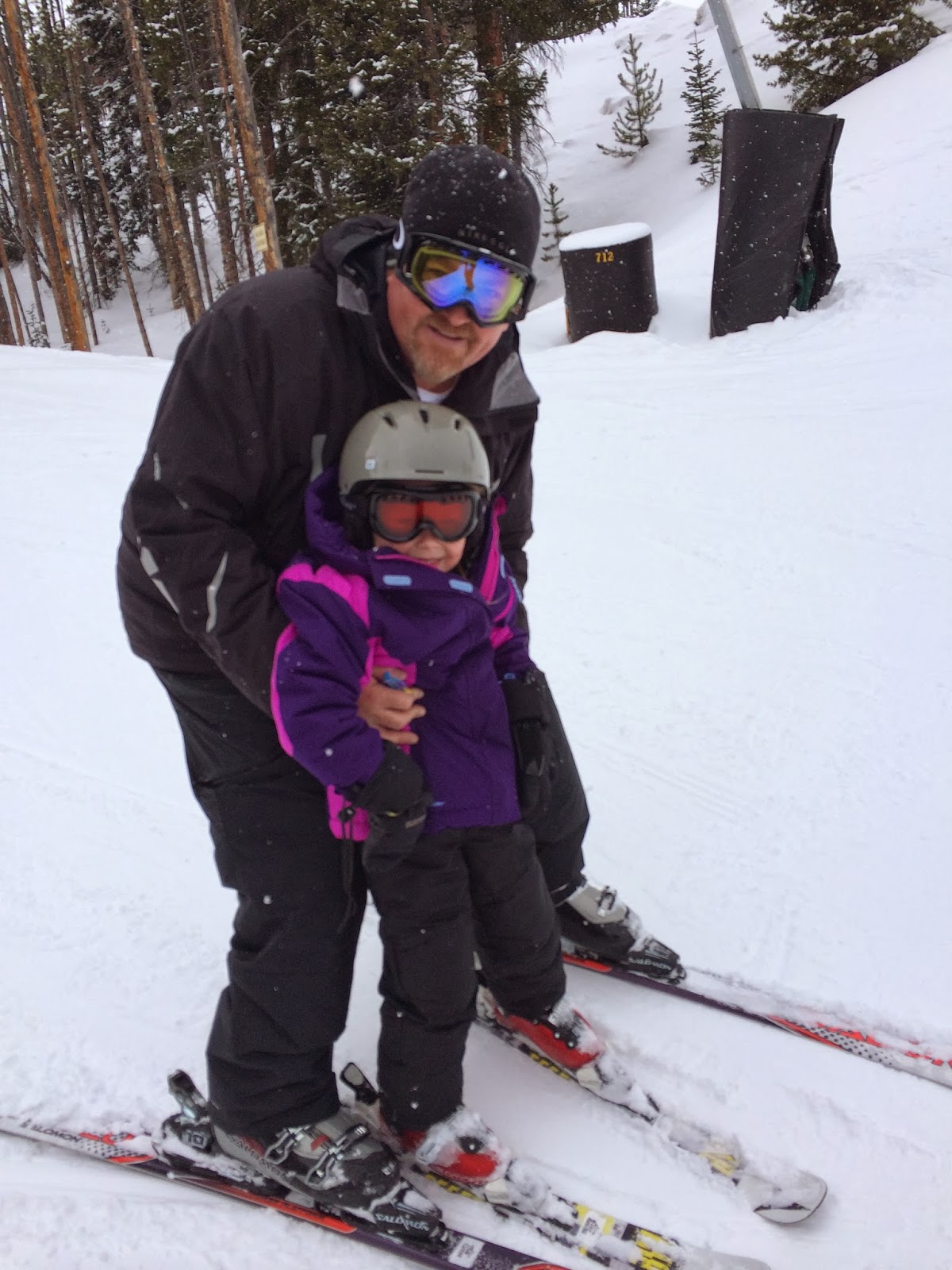 Todd is as excited about the possibility of an annual ski trip as I get about an annual beach trip.  So, he is VERY excited that his first born was loving skiing so much! 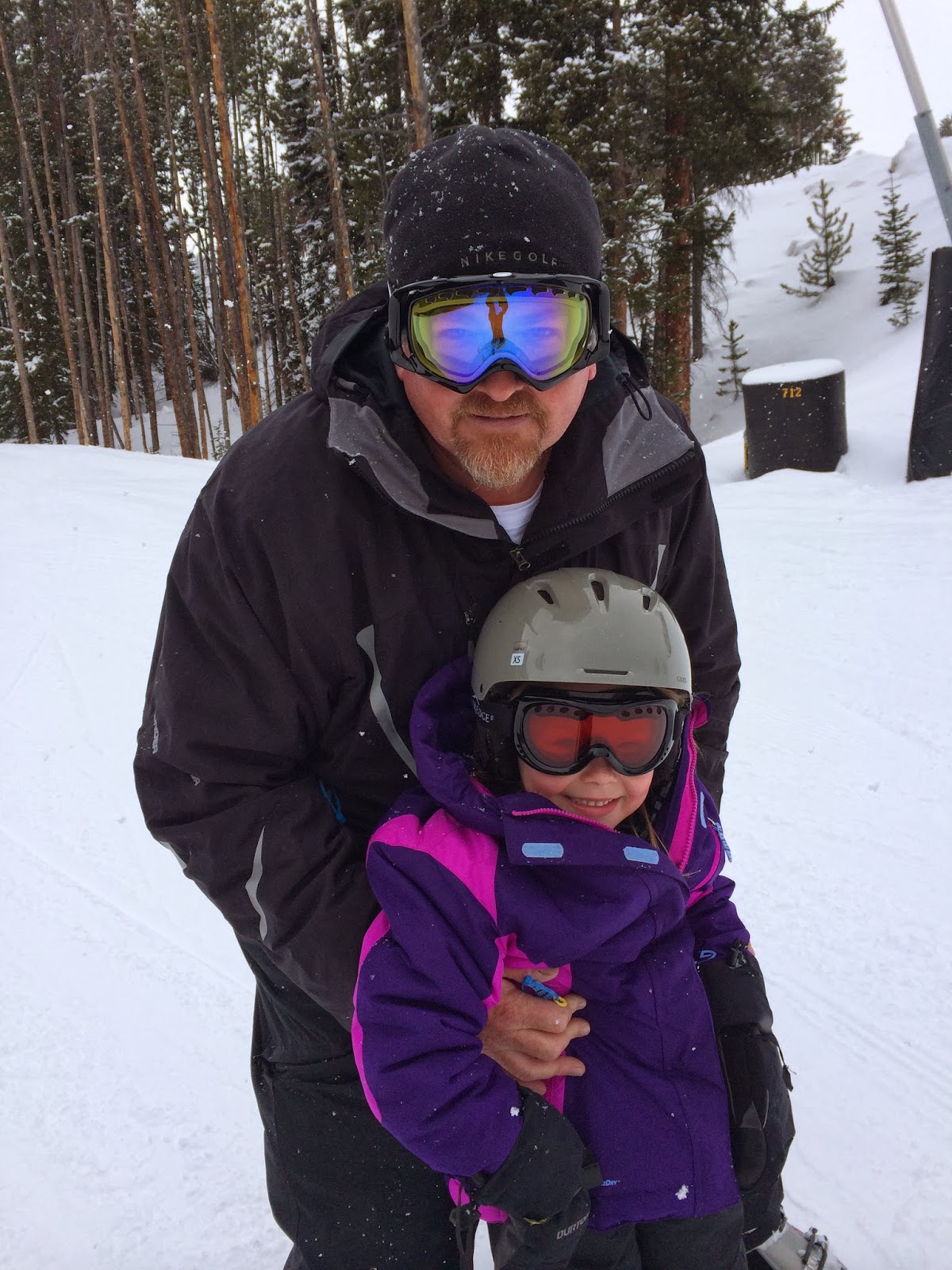 I like to ski.  In fact, I sort of love it.  But I do NOT like all that is entailed to get to the slopes, and all that is required afterwards.  W.O.R.K.!! 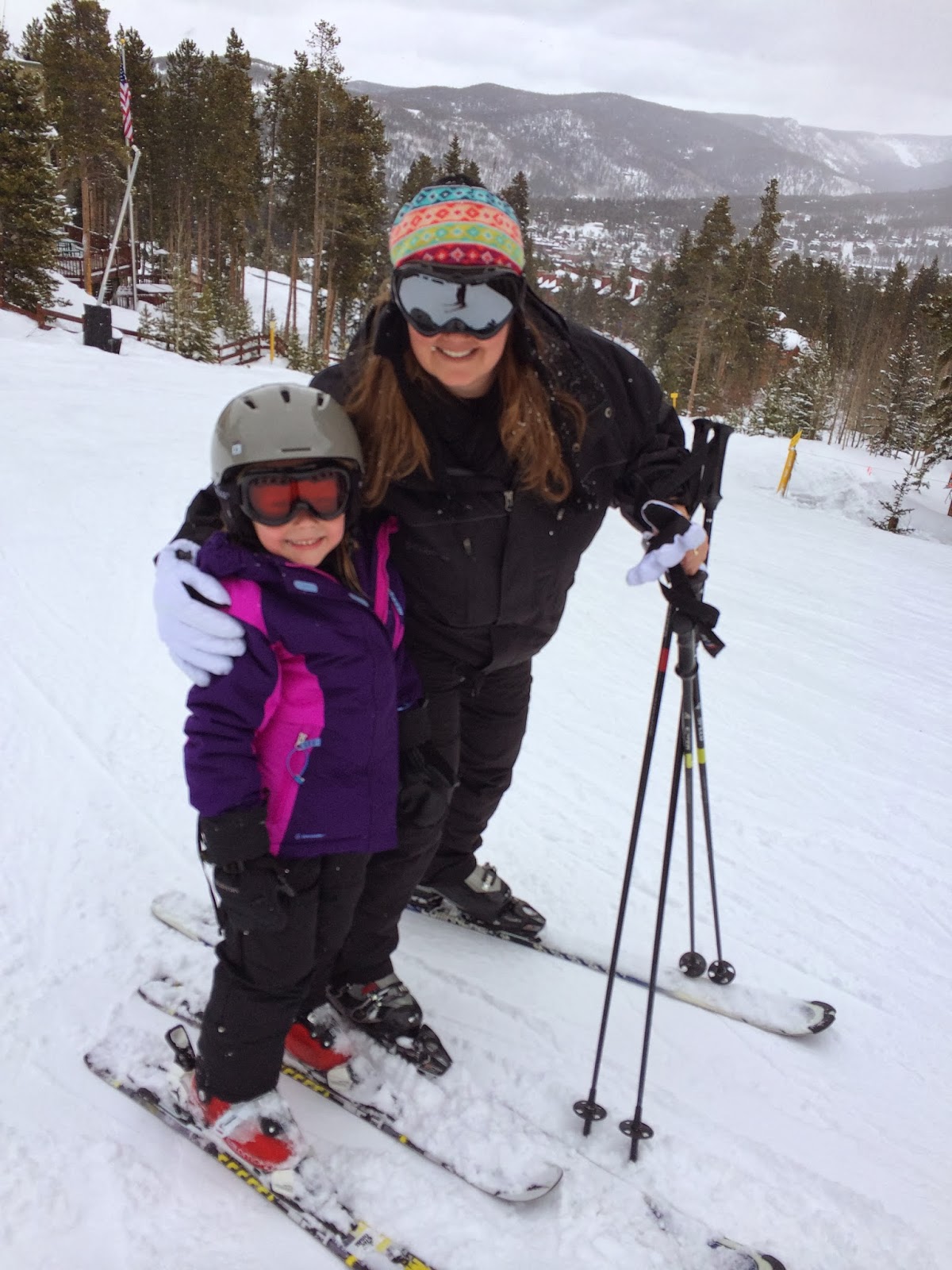 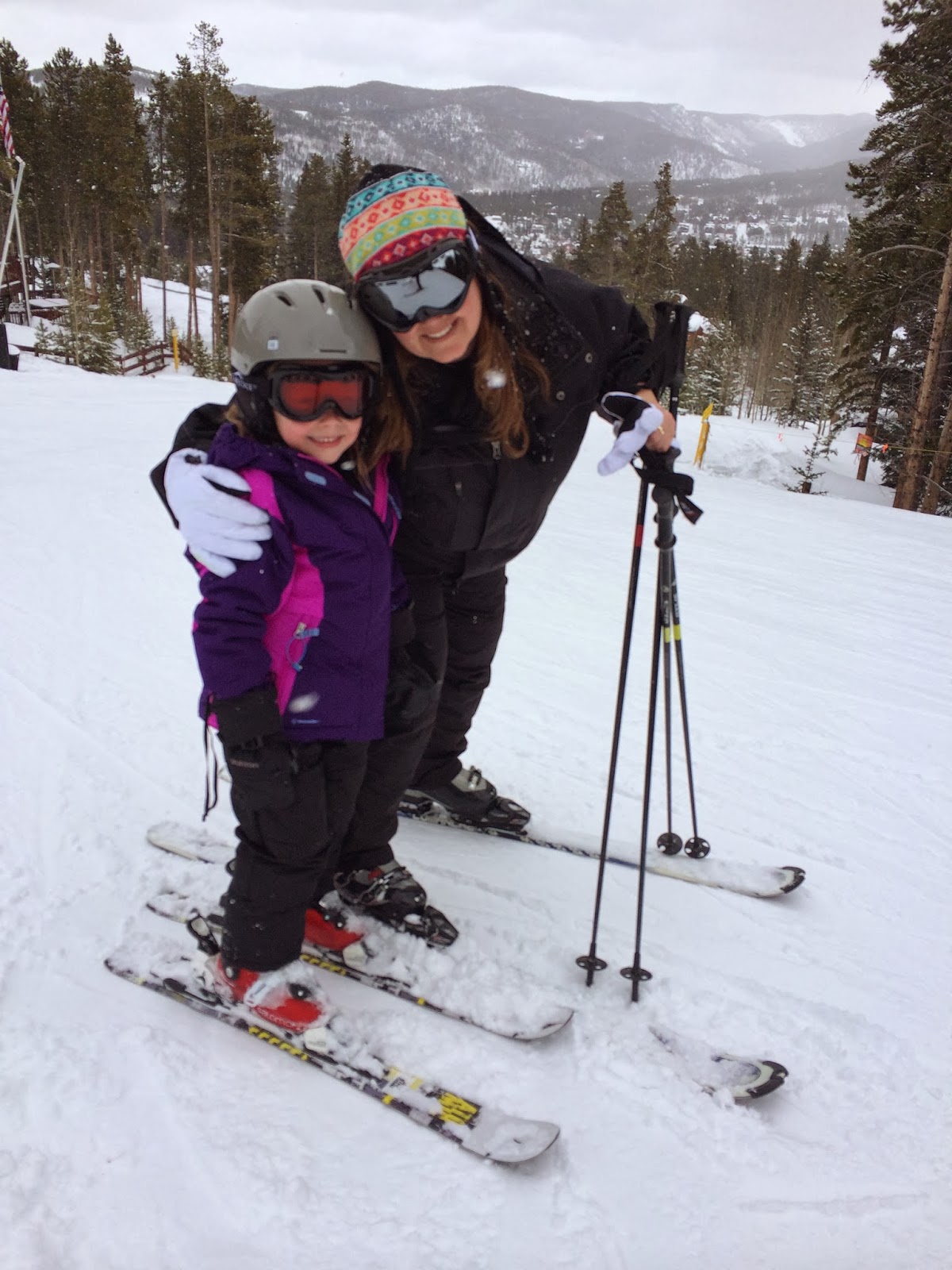 This little girl became fearless by day two.  And by fearless, I mean was scaring the crap outta her mama!!  Straight down the mountain, with very minimal skill to slow down or stop.  I would see trees ahead and cliffs, with complete drop offs, and I would see Miss Pikabo Street come flying by me, and I couldn't catch her.  All I could do was scream, "SLOW DOWN!!"  or "SIT DOWN!!". 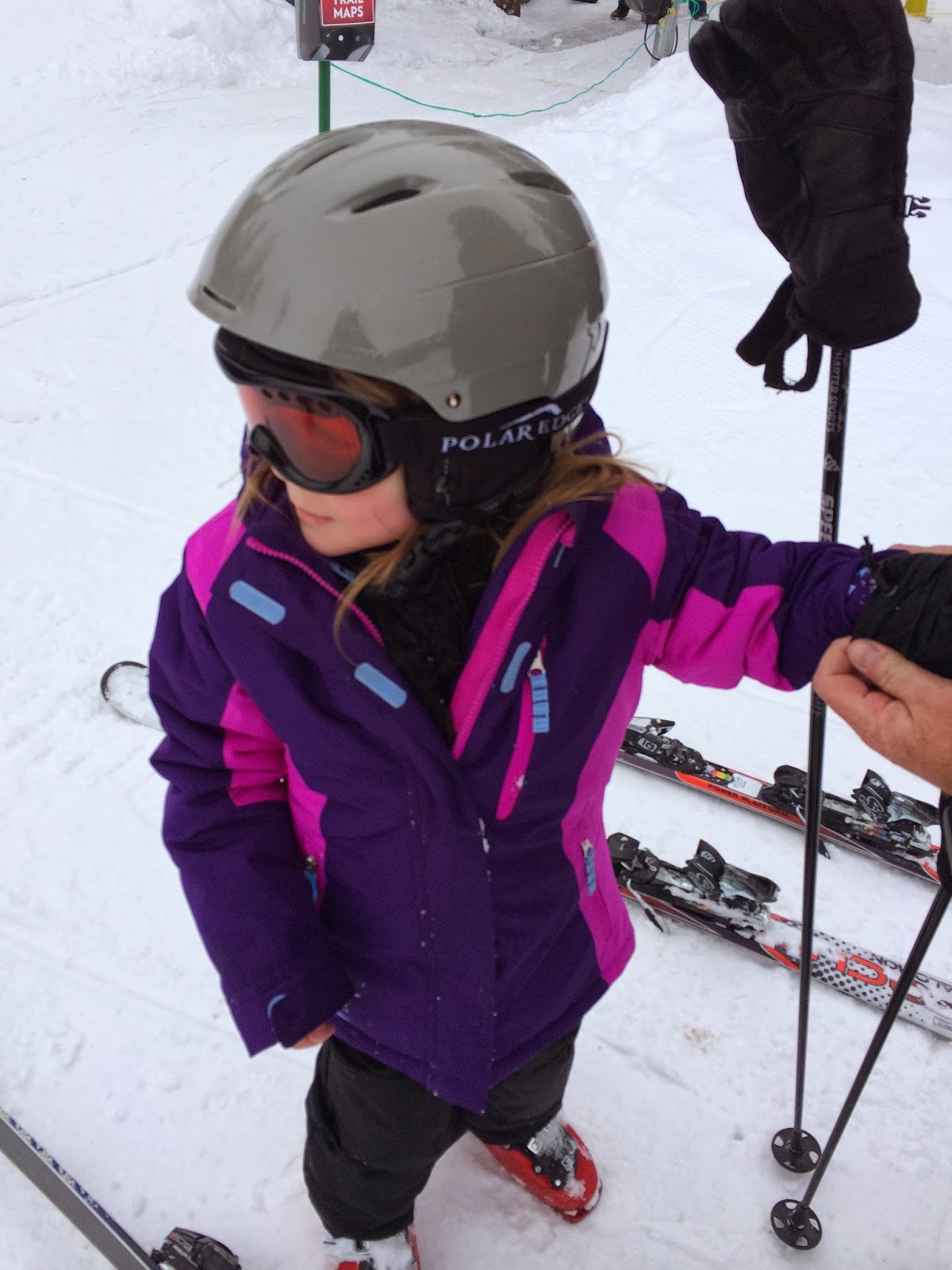 I am not a naturally "nervous" person.  I mean, I am a risk taker, I'd say, and I am also generally optimistic.  But.  There is something about seeing your 6 year old, on skis, in an unfamiliar environment that can make your bootiehole pucker.  Like big time! 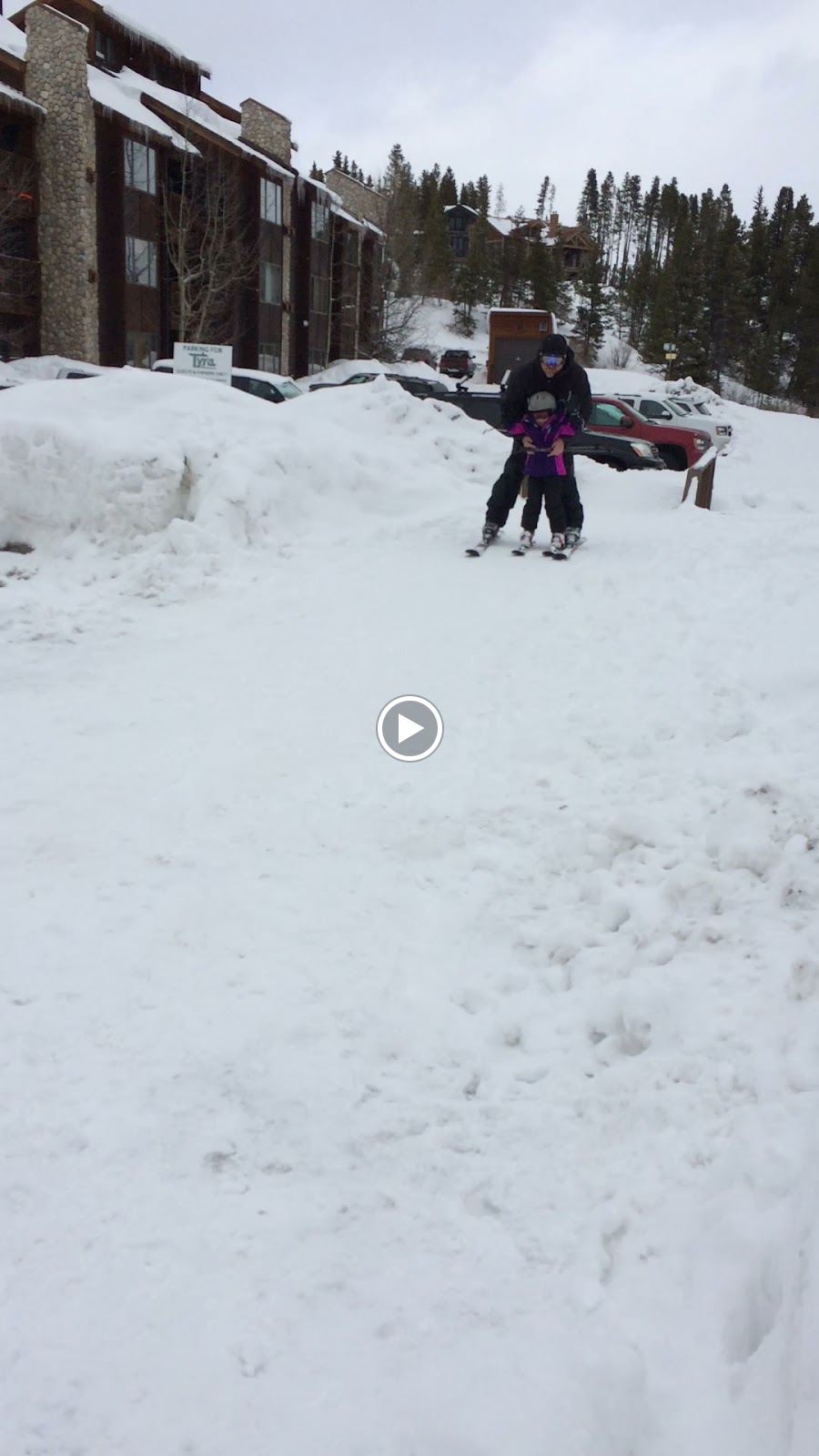 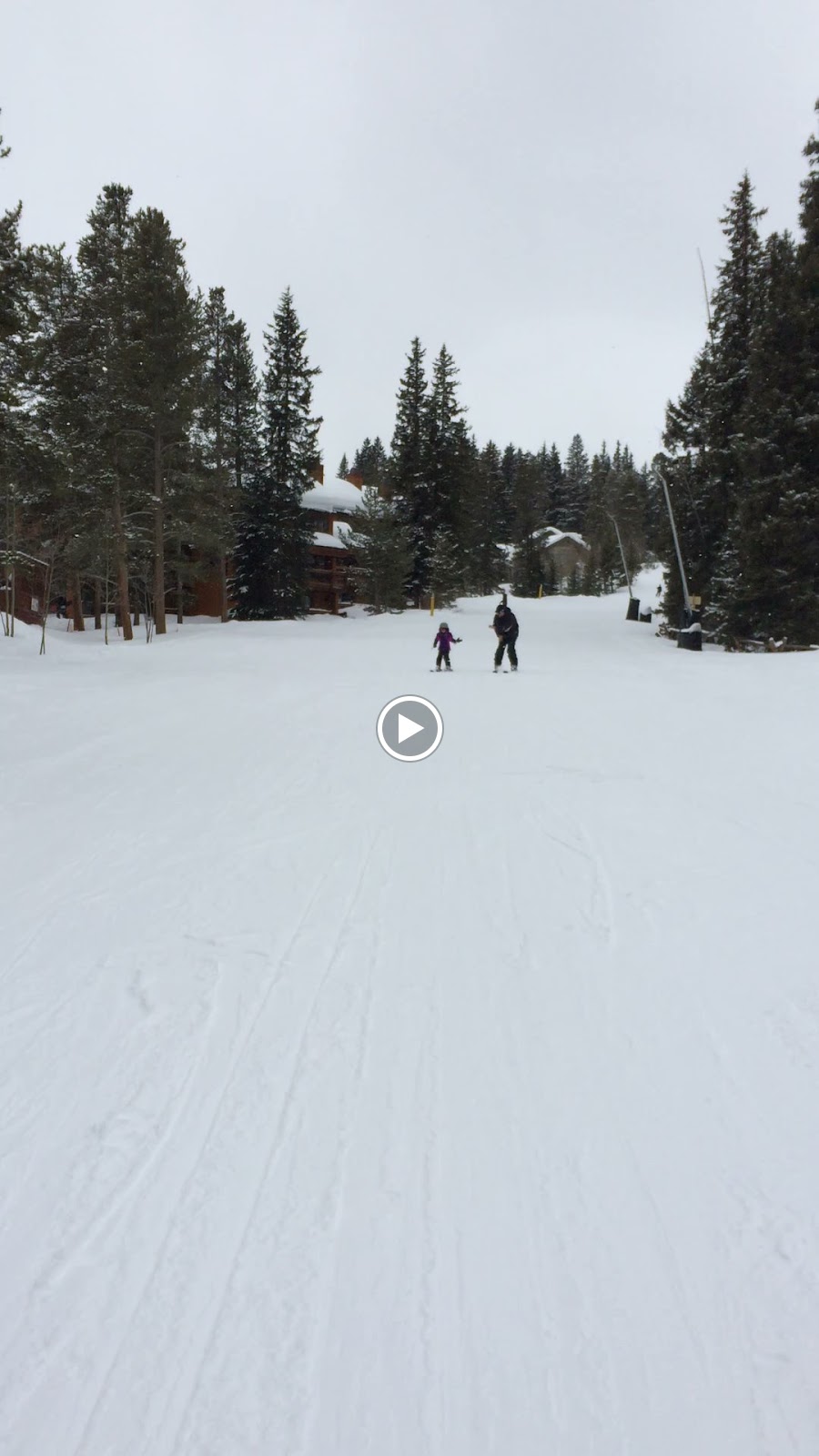 She eventually started skiing on her own on day one. 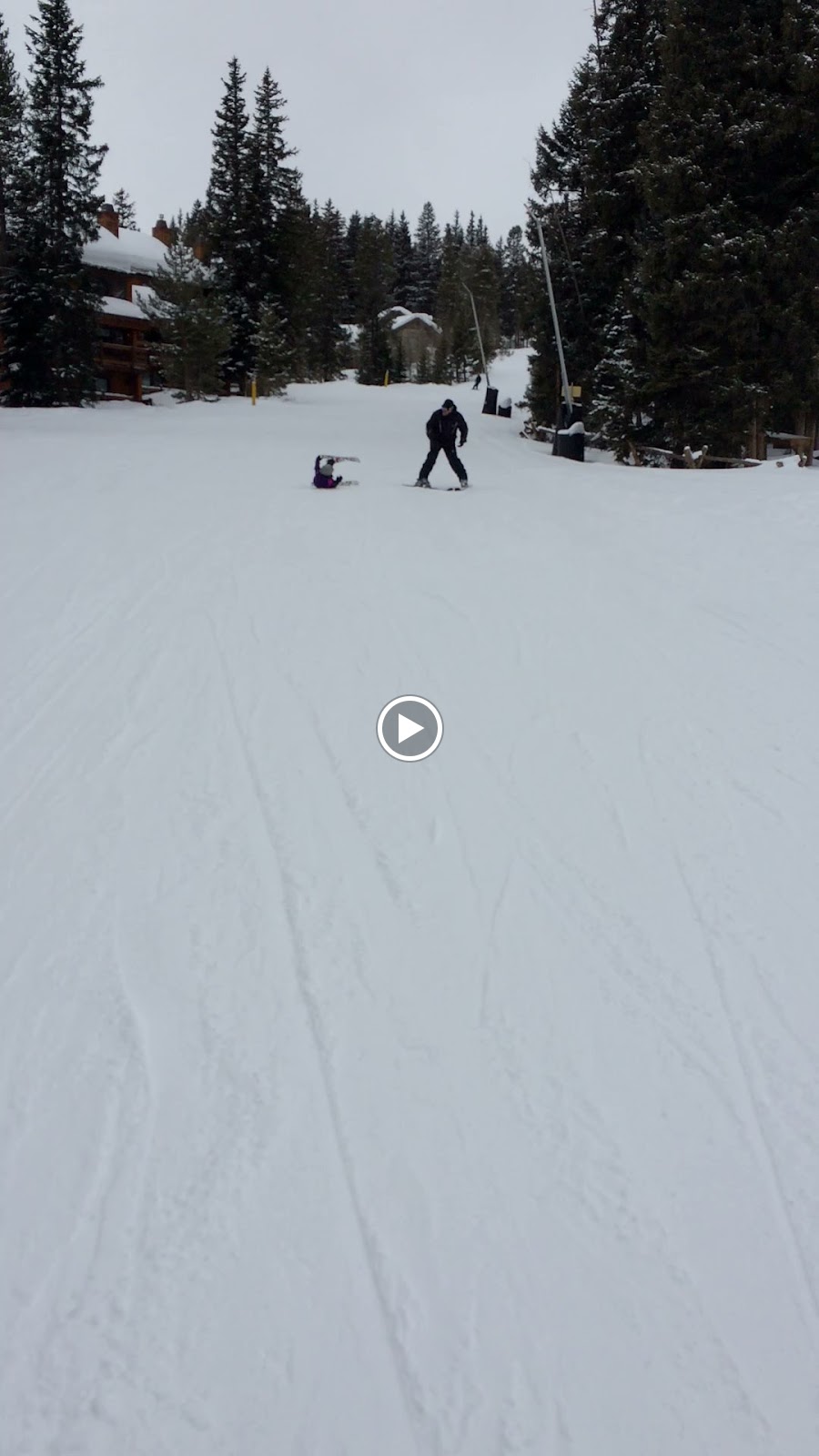 I wish I had more video of her on Day 2 and 3.  Todd wore a GoPro on his helmet, so we do actually have that footage.  I just need him to show me how to upload it to my computer so I can post a few on my blogola. 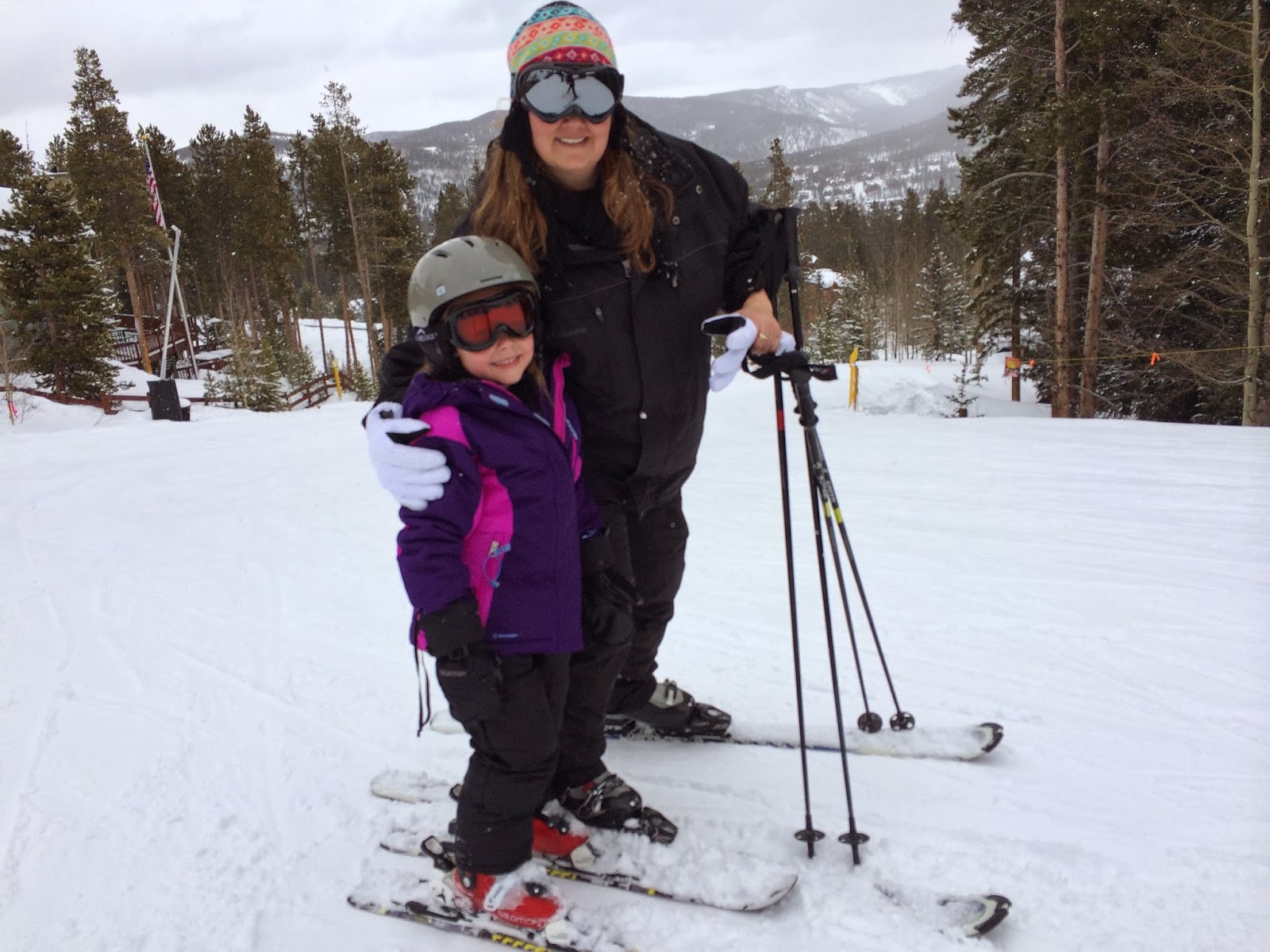 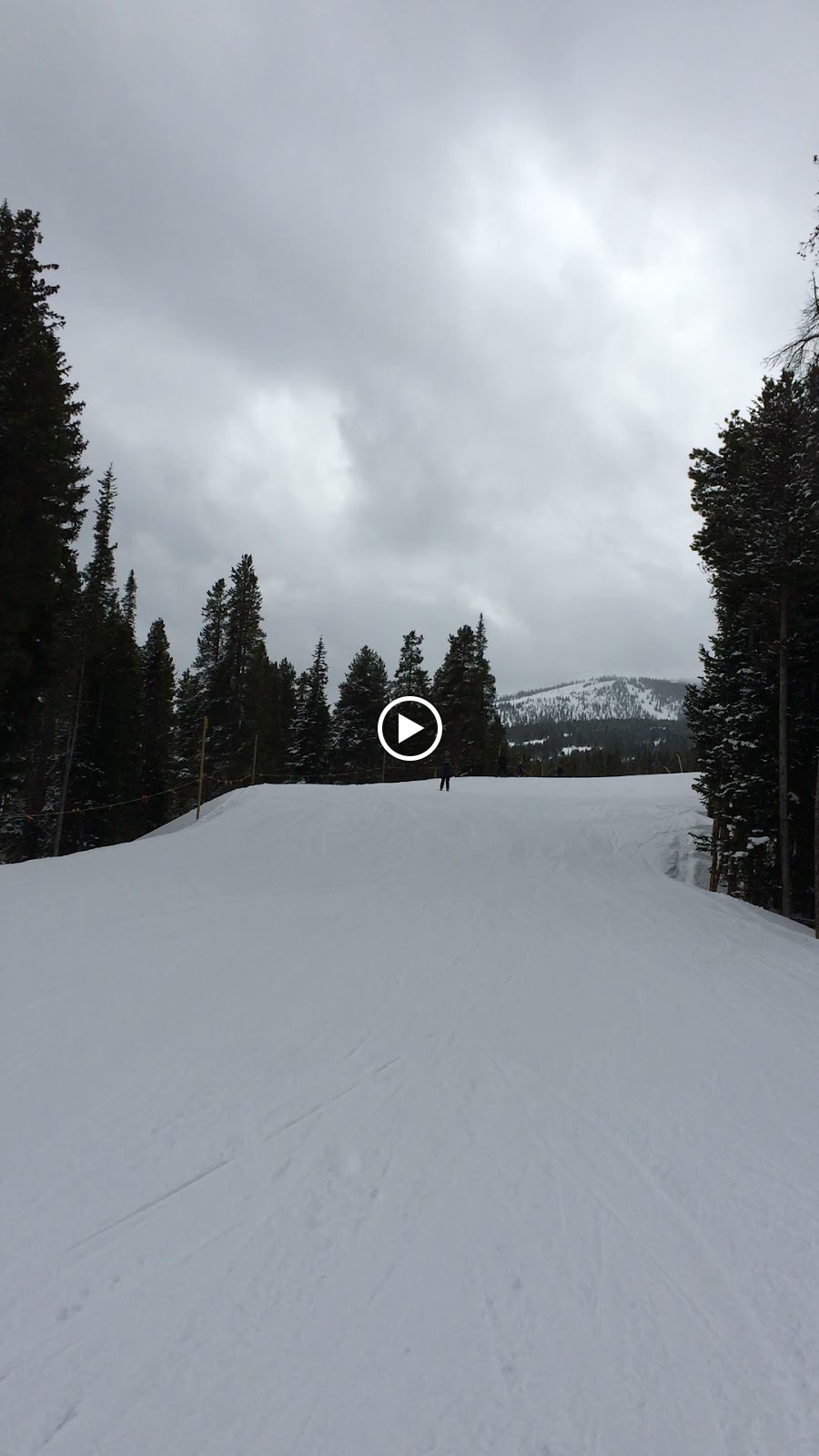 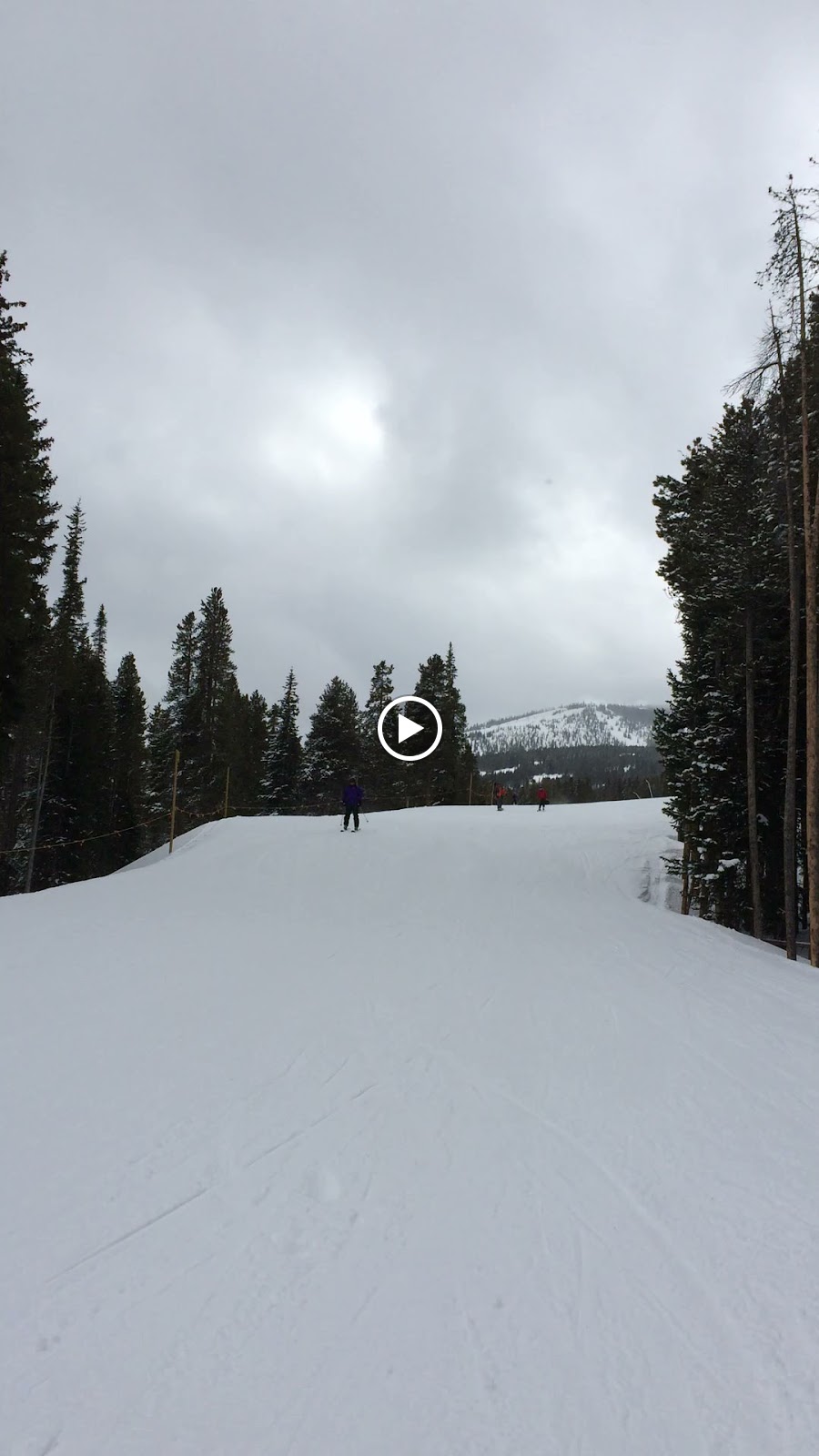 I look like Chris Farley in the picture below.  Less than flattering!  But, it is Todd and Ellie, two chairs behind me, that I was trying to capture.  Not me and my other chin.  See how high we are?  That made me an absolute nervous wreck.  Thank God the video camera was not rolling when I rode the lift with Ellie, and being so paranoid that I wouldn't be able to get her off the lift as well as Todd (she can totally get off the lift with no help at ALL by the way), I forgot to get off the lift myself, and started riding it back UP!  I had to JUMP off the seat and fell into a bank of snow looking much less than graceful.  They had to stop the chair lift, run out and check on me, replug up something that I'd disconnected when I landed on a cord of some sort.... it was a debacle!!  Todd was so upset that he only had it on camera vs. video to get Ellie getting off the lift.  I must admit, I kinda wish I could watch that one.  It was pretty classic! 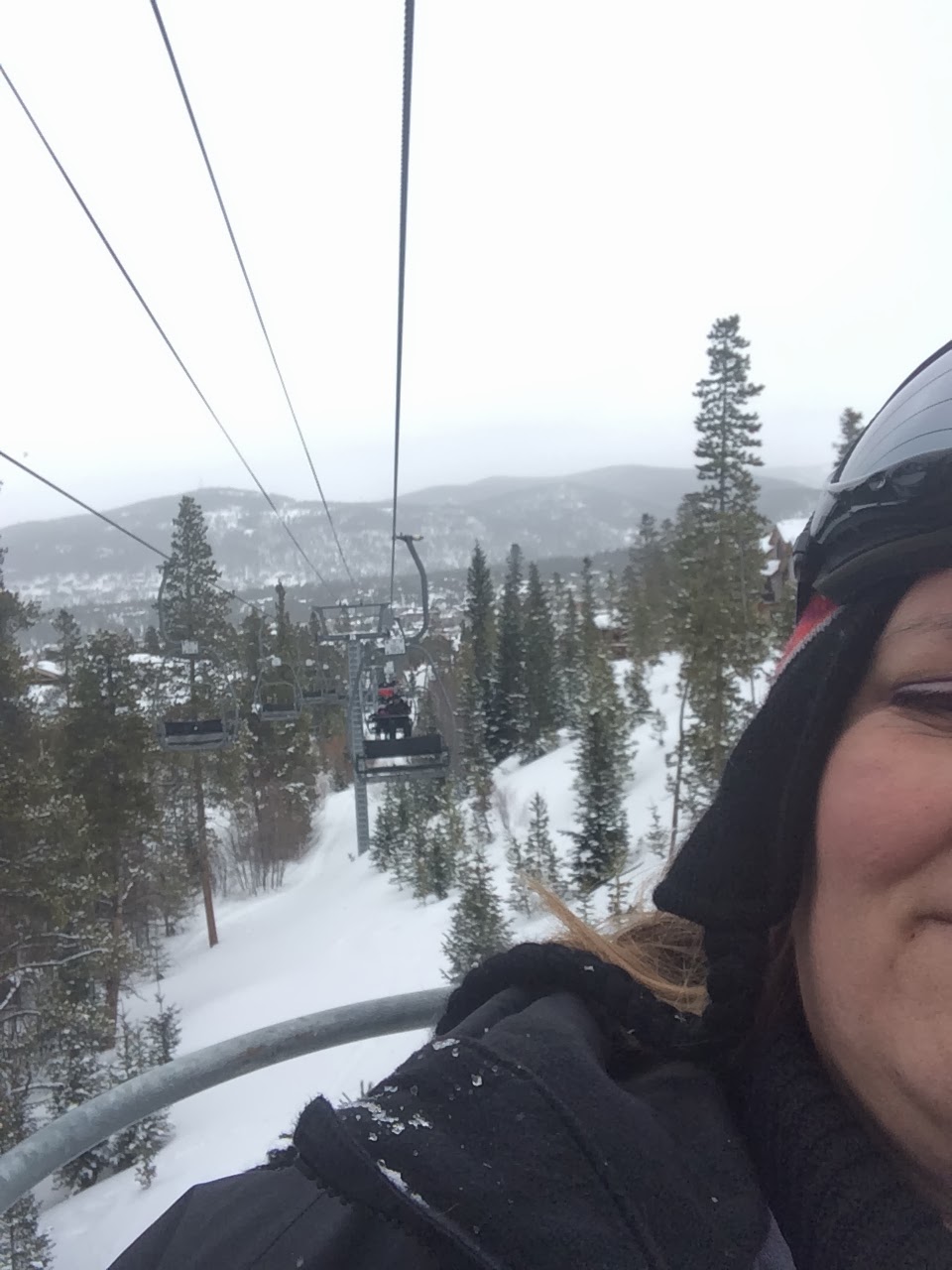 So there you have it... Ellie Sue on day one. 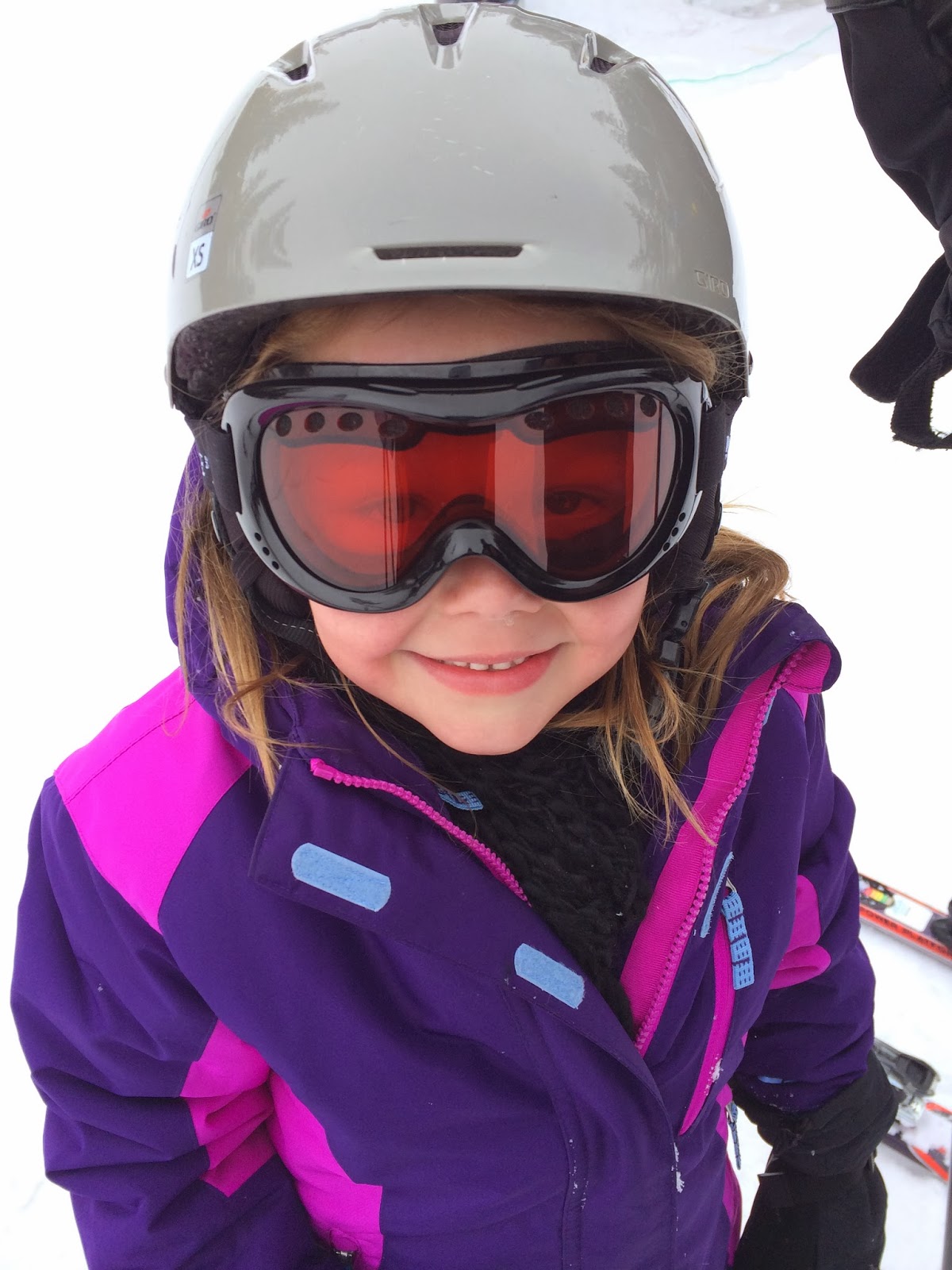 I know these pictures and videos will be some that one day, when she has been skiing for years, she'll look back on and be so glad we got!  Maybe even use one or two in her wedding video?!  Or... maybe they'll want to use them when they are doing a documentary about her prior to the Olympics when she is skiing for gold?!  You just really never can tell. 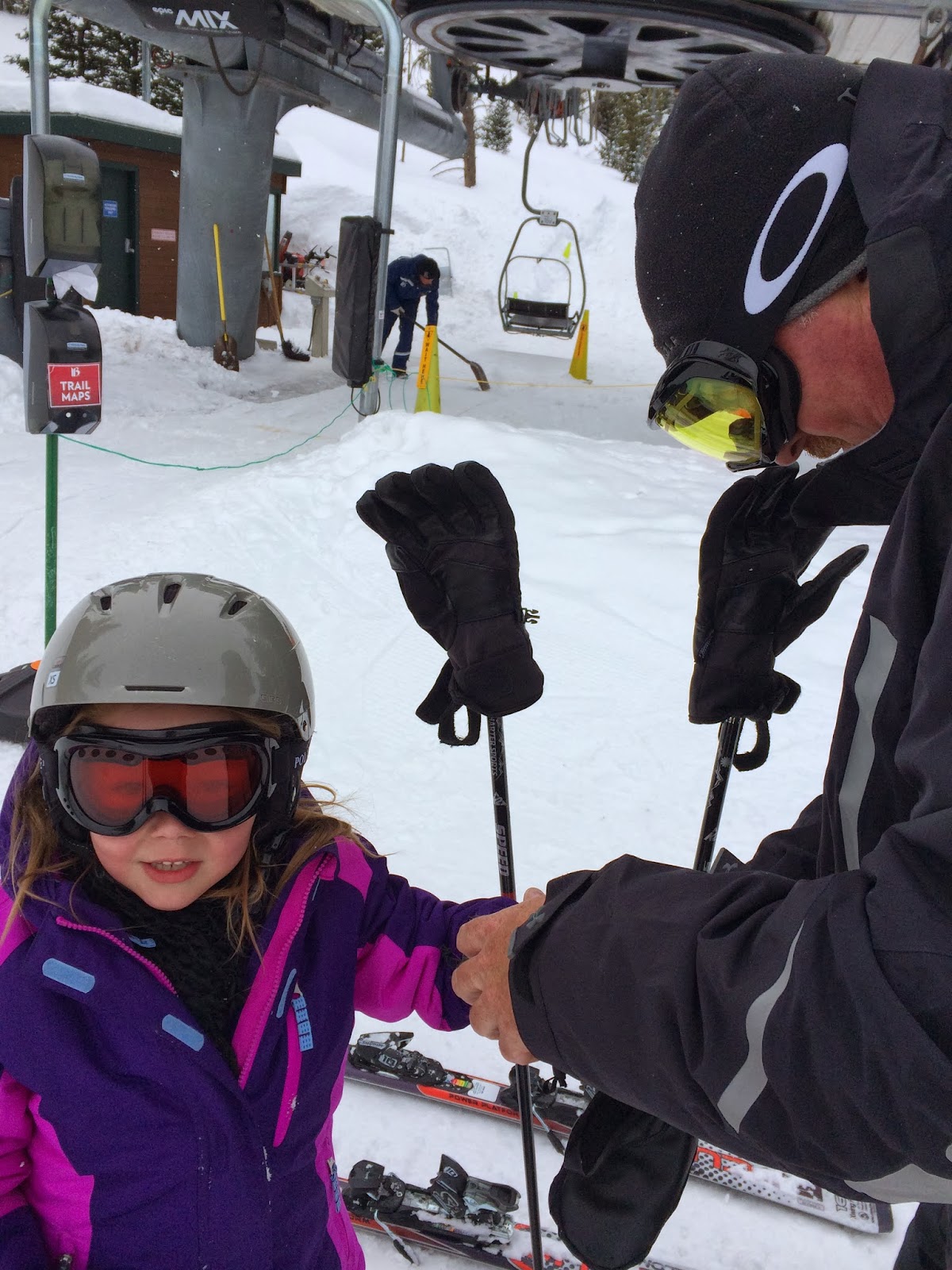 Either way, I was proud of my baby girl! 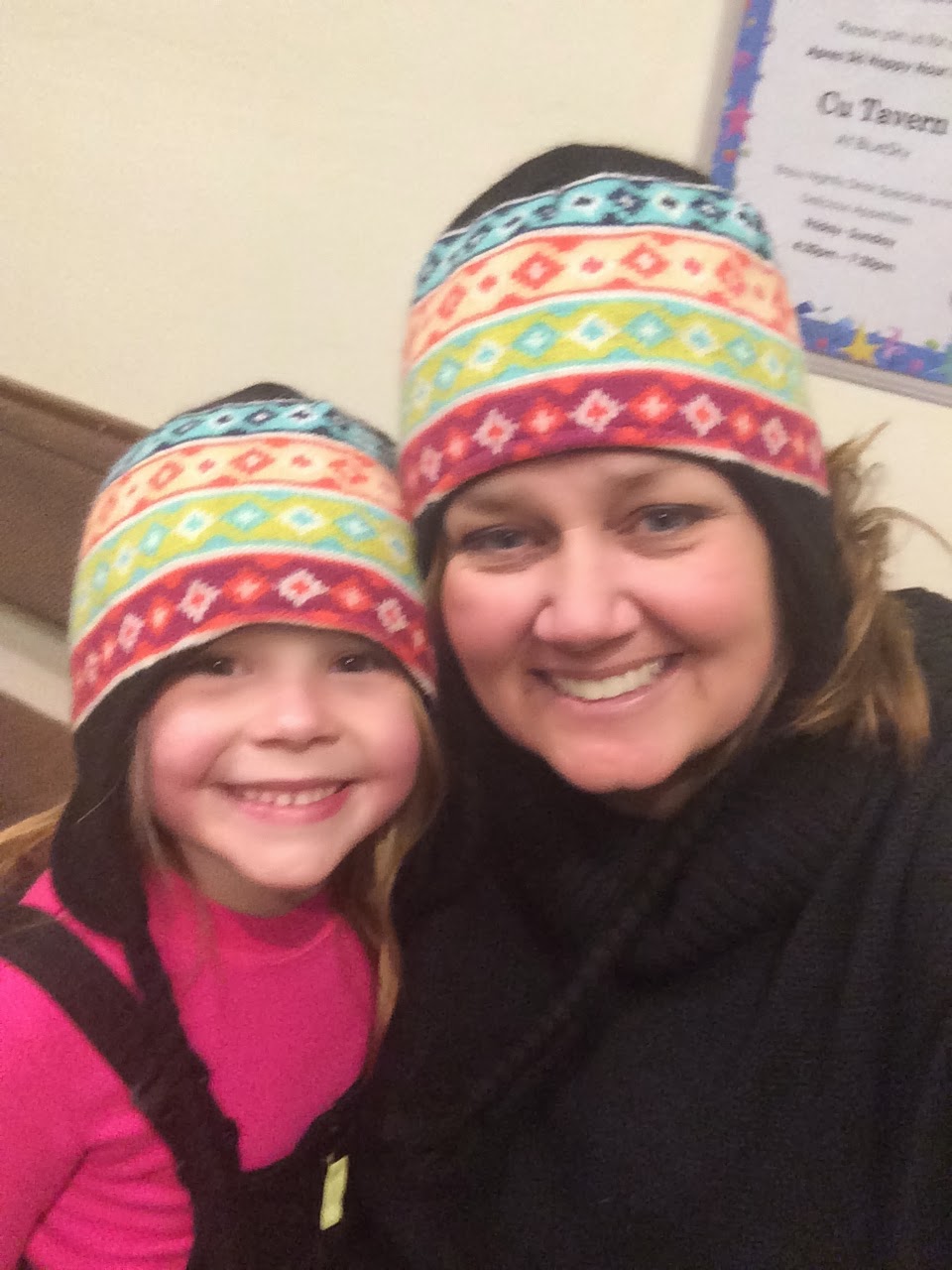 I now have this as my screen saver.  And I think that one word summed up her whole day. 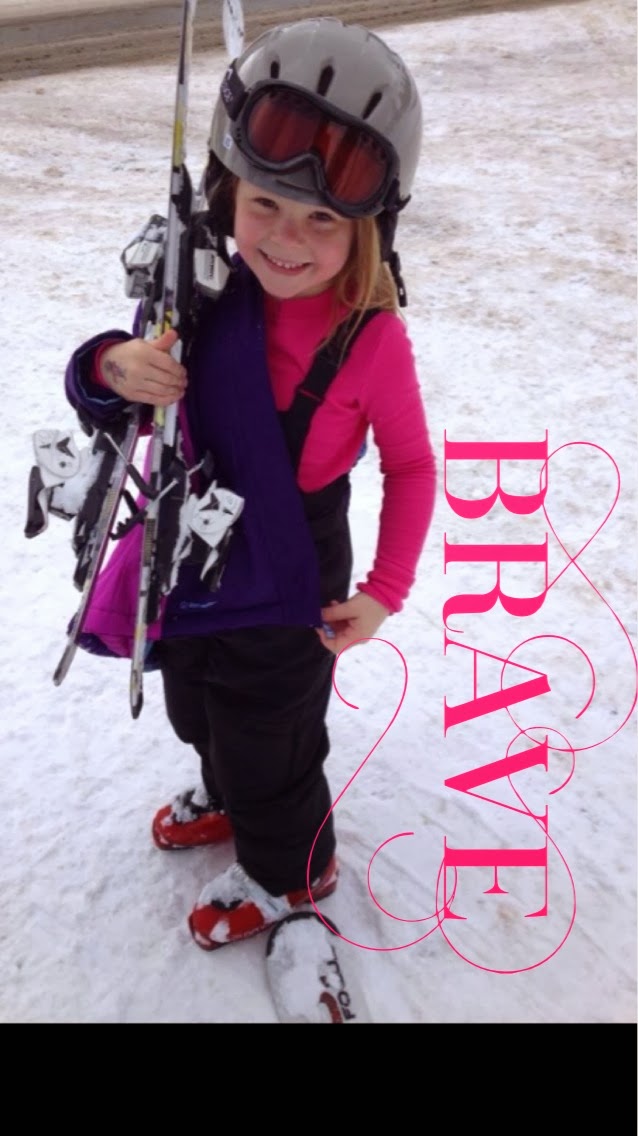 I've always loved Ellie's personality! Such a brave girl, indeed.
Did y'all pack all of the "gear" or do you rent it? (I tend to stay in the SOUTH lol)

She is very brave. I laughed out loud at the thought of you falling in the snow and causing everything to shut down.
Also, jake was saying hello when you posted tonight :-)

I could see the videos. Great memories made for you, Todd and the girls! Ellie looked so natural with her ski gear on.

I have 4 things on my mind about this post:
1 - While I can't actually "play" the videos, for me, they turn sort of into Gifs, so I get the general idea.
2 - You'll get the hang of all the gear and prep and the coordination of all that. Getting ON THE mountain can be a bit labor intensive, but you're the type of woman who brings 5 different craft projects TO THE BEACH with her to relax, so if you can coordinate that, the snow/ski/mountain stuff will come. Hang in!
3 - Along the vein of gear, and please know this is mentioned with nothing but affection... I am thrilled and not surprised at all to see the girls in helmets. So, next year helmets for you and TG too? One of my best friends works on the TBI unit at Spaulding Rehab in Boston, and here in New England it is not uncommon for someone on any given TBI unit anywhere to have a winter sports related injury. I love the stuff that comes out of your noggin, and unfortunately we know better than most that sometimes it doesn't take much at all to ... anyway, I love ya Mo, that's all.
4 - Without doubt "bootiehole pucker" is now my new favorite phrase of all time. I howled!

One of my favorite posts of yours! Love it. I just wanna squeeze her! And that Todd...what a good Daddy!
Oh - and the whole puckering deal - literally LOL! Cray, cray!

Yeah. She really did, didn't she?! I thought so too.

Just an FYI... I took beads AND scrapbook gear to the mountains too! You should just see what all I got accomplished!

So proud of her! I'm right there with ya; you know I'm about the most nervous momma there is! It's funny to me that you consider yourself one though, because YOU are the voice I hear in my head when I instinctively want to do things FOR Shelbi! I can just hear you saying "Nope, Let her do it" like you told me so many times in therapy.....

She is super brave!

"Bootiehole pucker" literally made me laugh!

I love that picture of you and her in your hats (I think its the 2nd to last one. Your girls are beautiful!

I literally just did a LOL while riding about your ski lift exit!!! Oh my gosh!! I can just imagine! :)

I do agree with you on the skiing thing - I enjoy the art of skiing and sitting in the lodge drinking hot chocolate, but it's too much WORK! You have to wake up early to get the slopes, try to walk in those big honking boots, layers and layers of clothes and drag all the equipment - ugh!! I can't imagine doing that with two babies!! But you faked it well - you look rather Suzy Chapstick..ish!!! Beautiful pics!

She looks like a natural! Beautiful photos of all of you.