A Sunday afternoon with my babies.

I was excited first for Kala, cause I thought she was getting pretty close.  Then, I read Diana's and thought, nope... she's closer!  And Joleen and Elizabeth were both also onto something with the whole Diane Keaton hair thing!!  Anyway, I have a surprise for every one of you who participated!  Just read on, and I will explain at the end.

Now, had I never posted the previous post, this is what I would've said.... 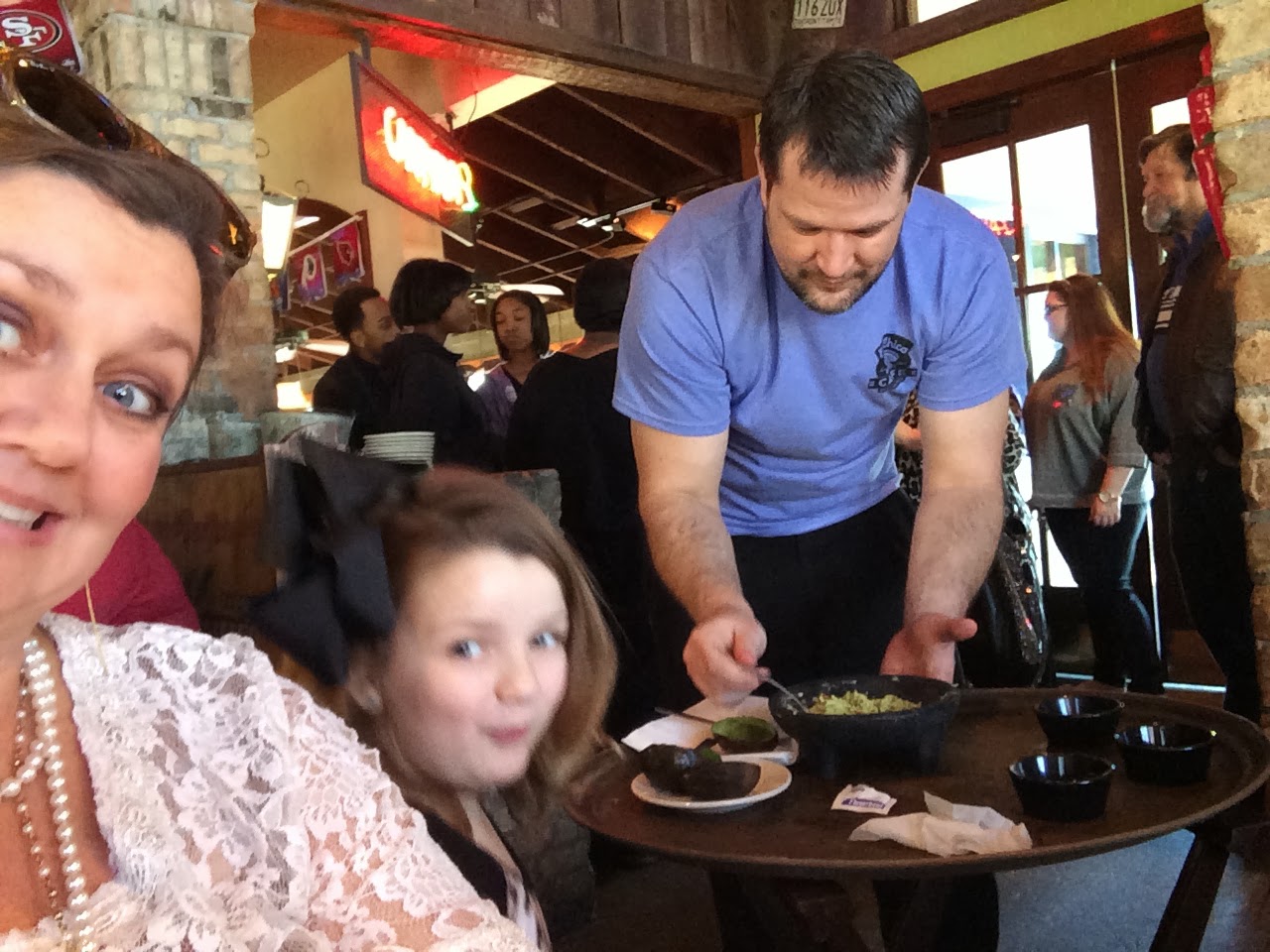 Last Sunday, I met my friend Cindy at ElChico's.  I took the three little girly girls, and they were pretty impressed with the tableside guacamole preparation. 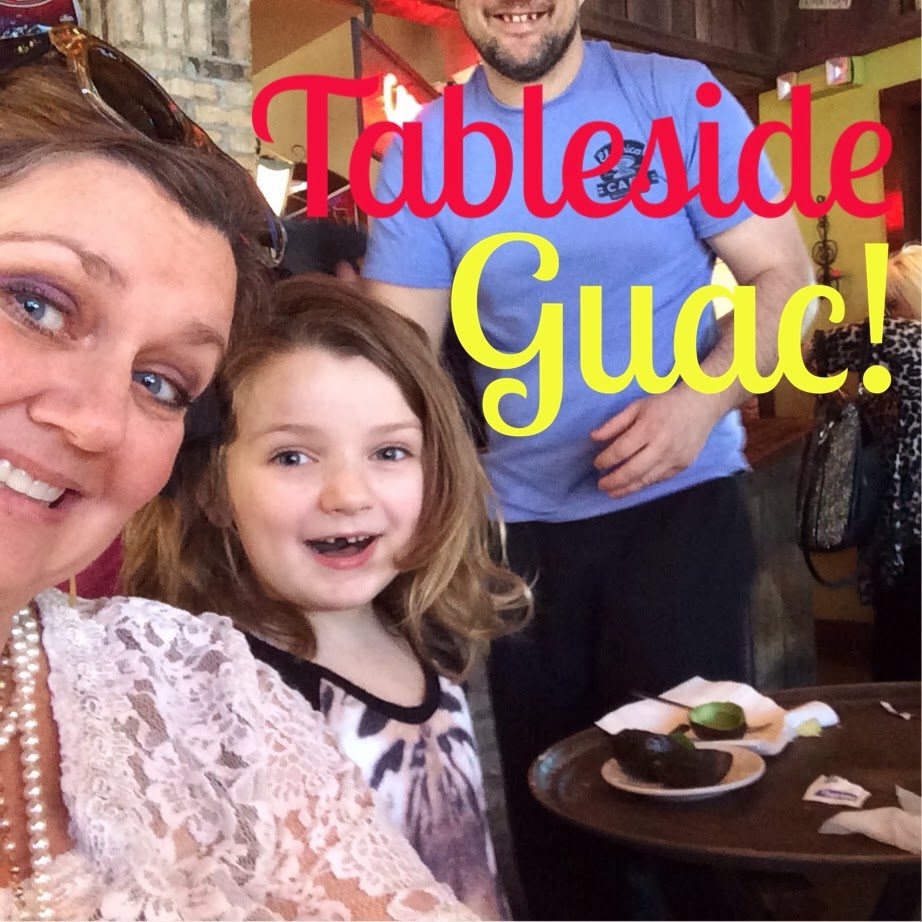 I didn't realize there were only a couple of places in the entire town who has tableside guac.  Apparently, it is somewhat of a rarity?!

Mallison called and wanted to come see us and tell us byebye as she would be heading back down south to Baton Rouge.  Because we were at the restaurant, she agreed to come there to say our goodbyes. 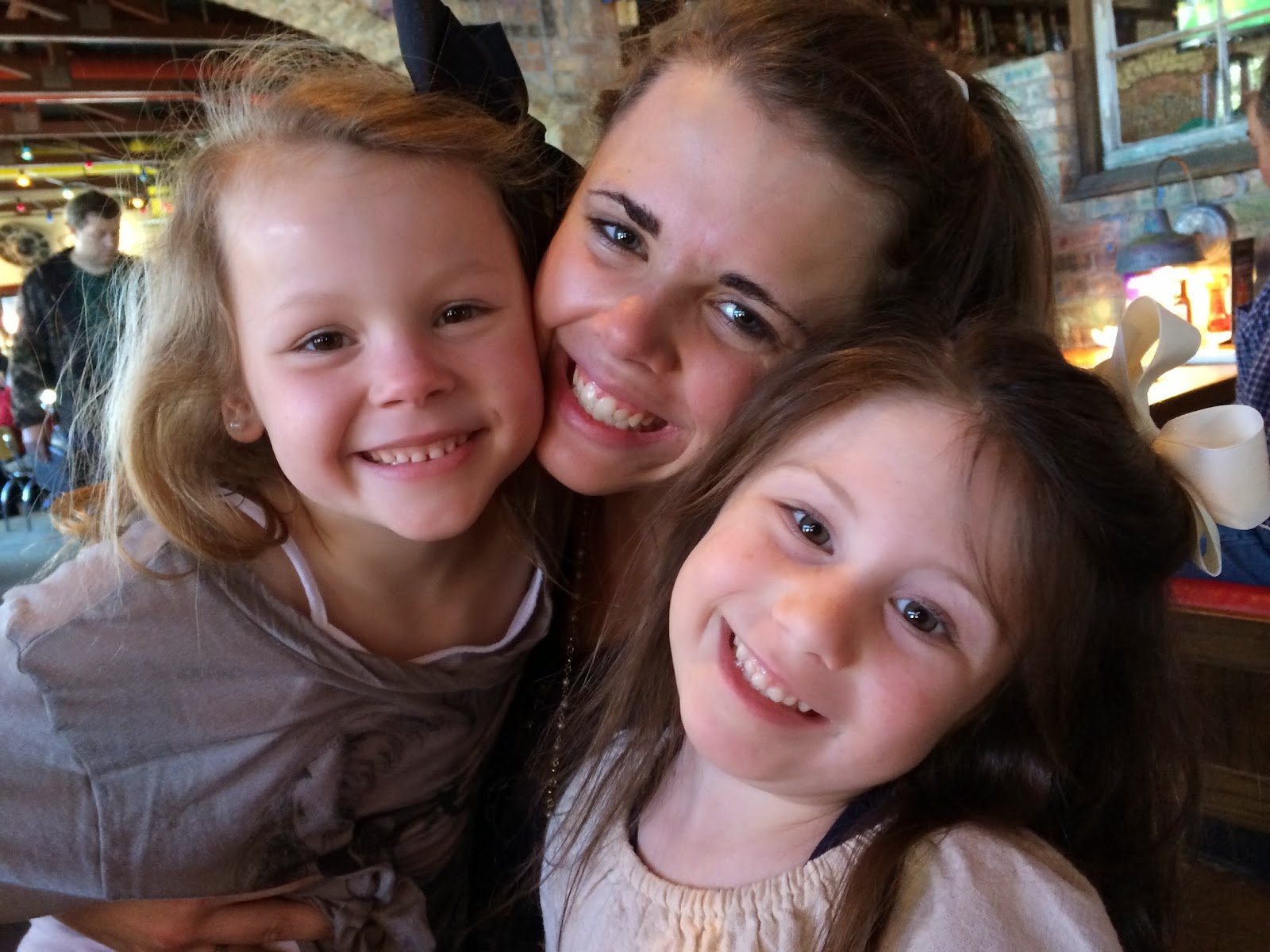 I gave "points" to the girls while in the restaurant and told them they could earn a treat from the dollar store.  So, when we left ElChico's, we swung by the Dollar Tree and each one of them picked up a prize.  Ellie got that fake long hair with the braid on top.  Madi chose a pack of Mardi Gras masks. 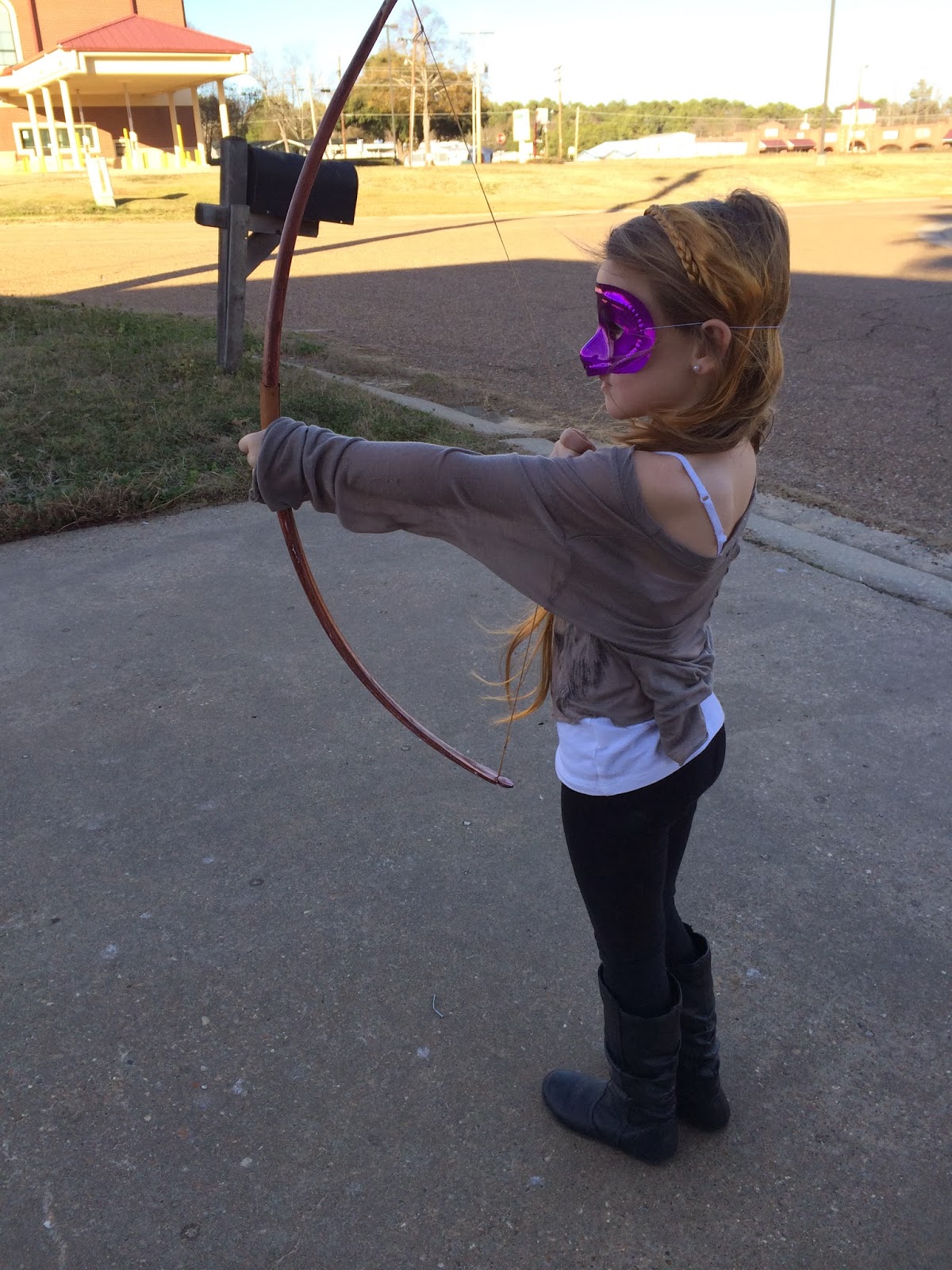 I just about couldn't believe it when Ellie was trying them both on, paired with the bow that Gabs got for Christmas, and which just happened to be in the back of the car.  She looked just like that chick from Hunger Games.  Cracked me up! 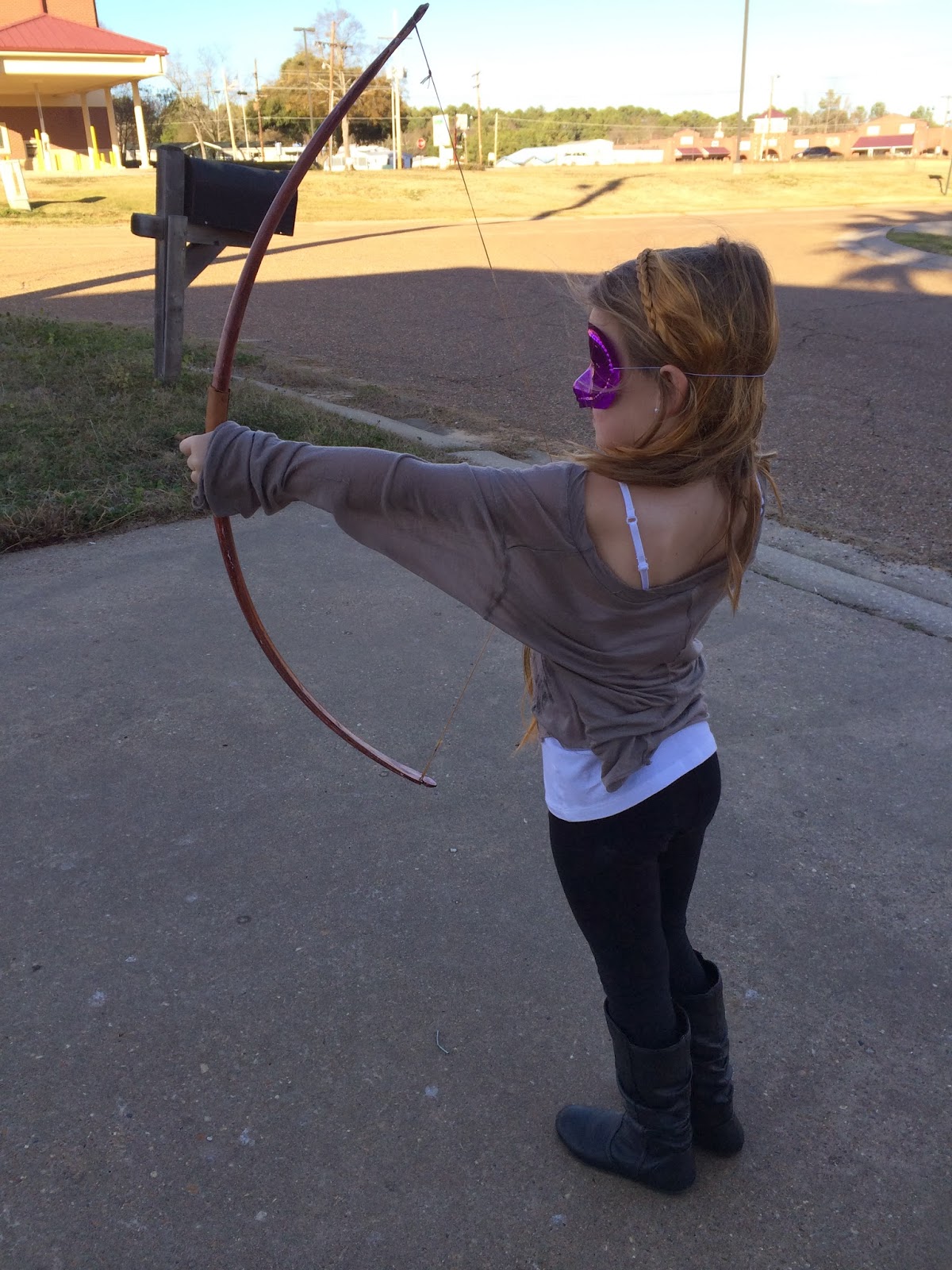 I told all  the girls to come take a selfie together, and suggested we all make "mean faces".  Gabs didn't really get that concept!  Note Ellie still has on her hair braid and extensions.  ANd for the record, a purple mask leaves a seriously dark magenta colored stain on your face if you wear it and run and sweat.  I didn't think it was going to come off. Did I mention I got a button machine for Christmas?  And Ellie Sue went through my photos I'd printed off and made, ooooohhh, something like 10 buttons... one for everyone we know, I think!! 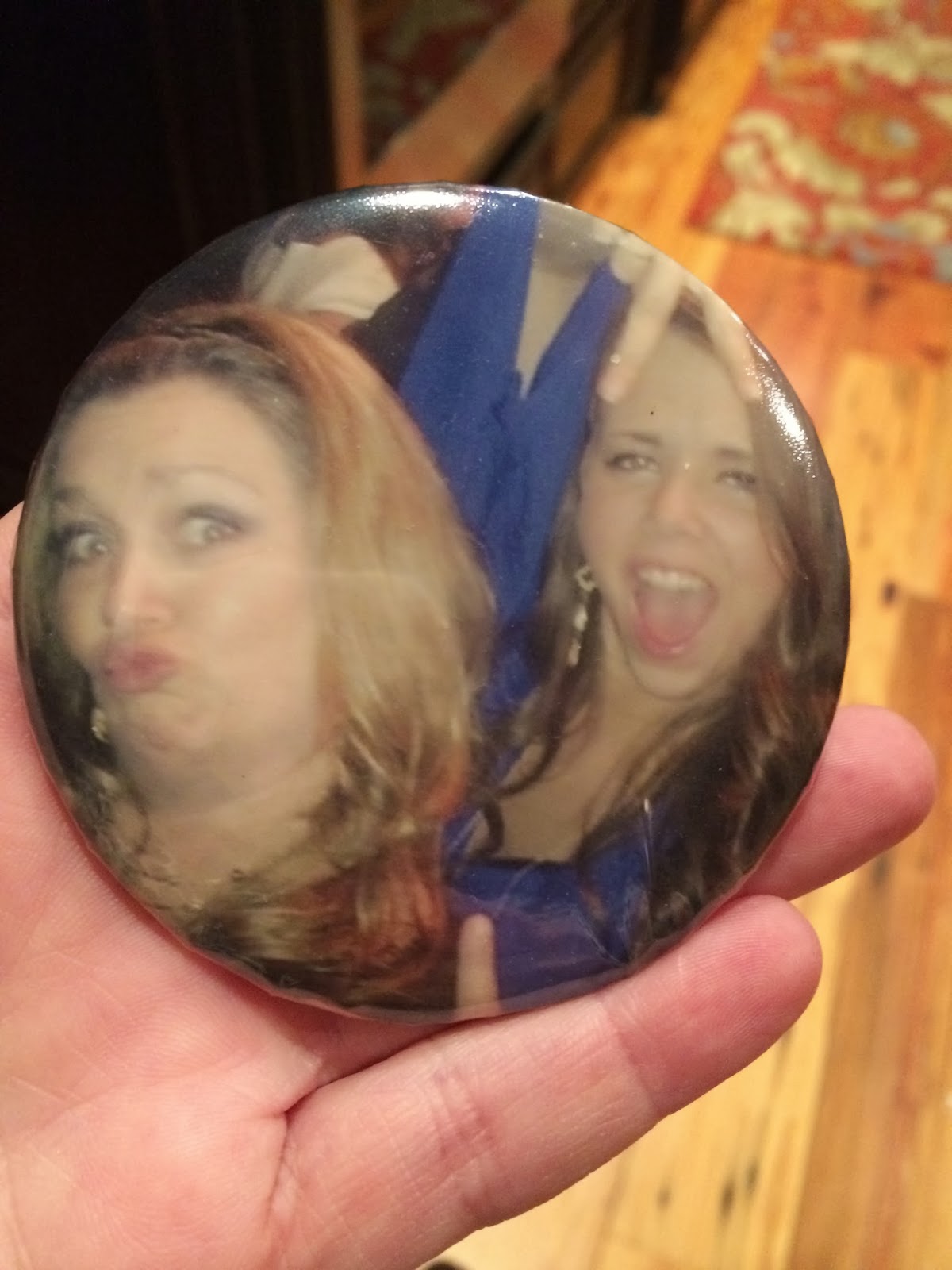 This one is going to Mary Allison.  I meant to give it to her to take it back to her dorm to remember her good ol' Stepmom!

And finally, did anyone watch the Golden Globes awards?  I think that is what it was?!  Well, I've been thinking about getting my hair cut lately.  I sent a text to Polly, my hair girl, and asked her to look at my Pin board called "my style" on Pinterest.  She looked at it and sent me three favorites.  I really liked them all.  But then.... there was Diane Keaton. 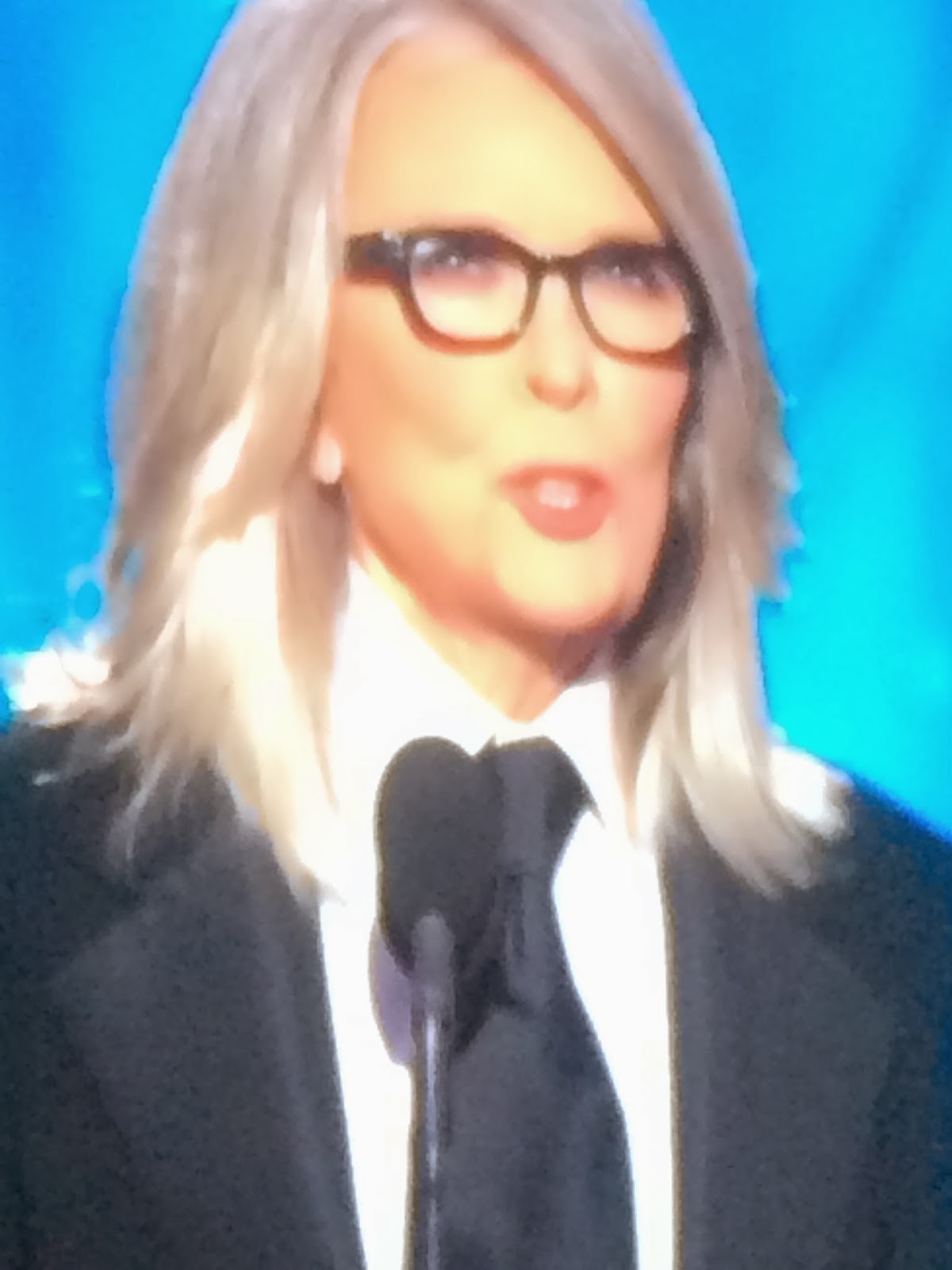 ANd I thought, that's IT!  I can tuck the long layers behind my ears.  I could still get it into a ponytail.  The primary goal is to decrease the amount of time required to get ready!  I hate having to dry my hair and especially the fact that I have to straighten it every day or otherwise wear it in a ponytail or bun! My hair has a good bit of natural curl.  But, when it is as long as it is now, it won't really curl up.  So, there is no option but to straighten it.  And that is too time consuming!  Dilemma! 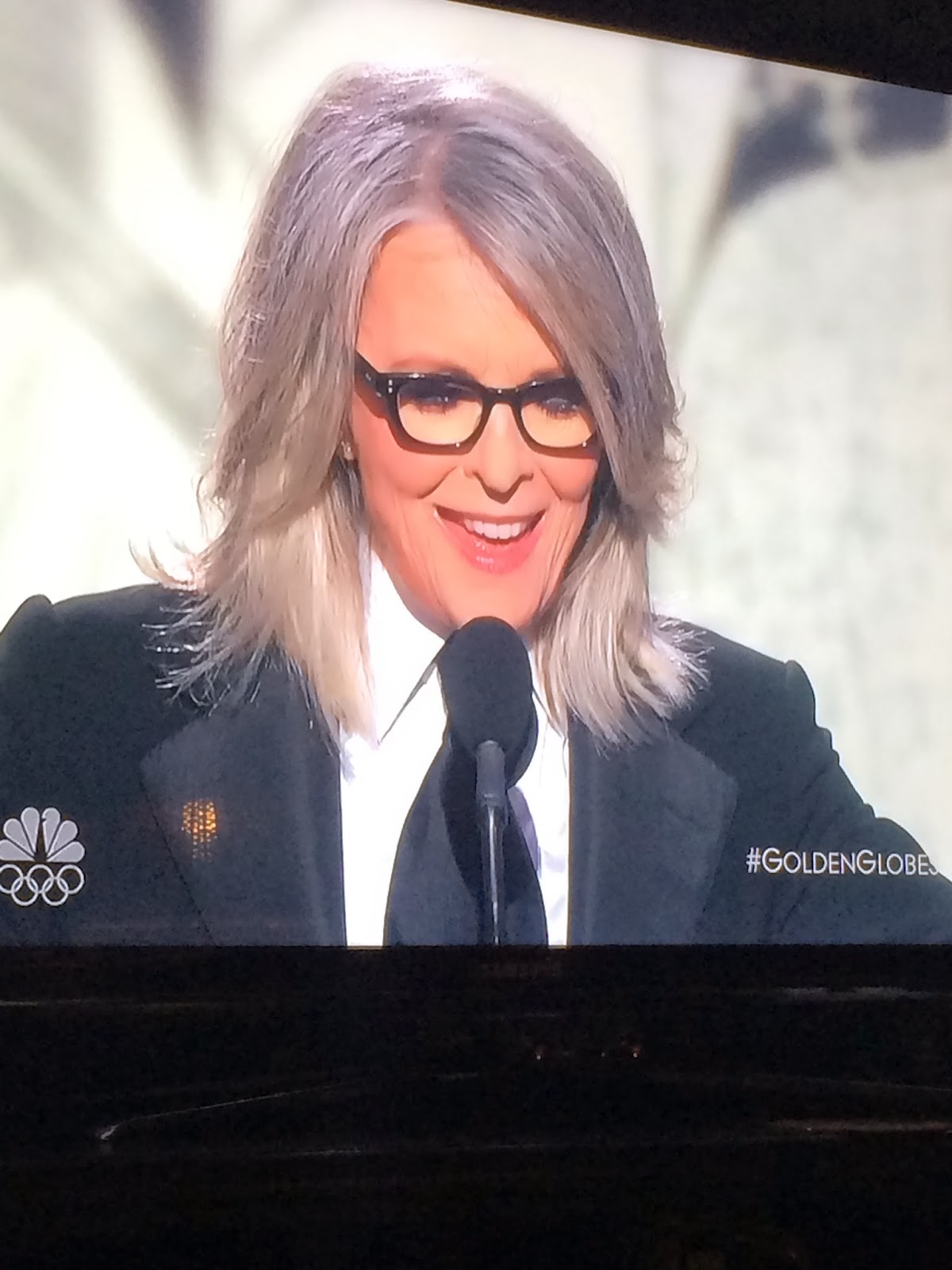 Stay tuned to see what I choose!  Or maybe what Polly chooses for me.  That's how I roll!  She chooses my color for me every time!!


Soooo.... see?!  There were many of you who were close!  And for everyone who participated, email me your address, and I am going to send you a MoJoy Bingo card.  Hang onto it, and I'll start the actual Bingo game on Valentine's Day.  The first to Bingo will win a big prize!  To that other 560 people who looked at my blog today and didn't comment... too bad, so sad!  Next time, you'll comment.

Ok, ok, I'll give you one more chance.  Answer this question and you can also send me your address... at mojoy@att.net, and I'll send you a card!

If you could choose a word to describe the way you want to feel this year, what would it be?!
Posted by melanie, aka Mo at 9:46 PM

I want to feel COZY!!

I want to feel COZY!!

Well, I thought I posted. So this may post twice. Anyway....the way I want to feel is thankful. I think it is what will save me. I lost my brother a few months ago. He had cerebral palsy but he was honestly the happiest person I have ever known. Both my parents are in treatment for cancer, and basically I feel scared. I'm reading a book called One Thousand Gifts- that is helping me with working on being thankful in all circumstances. Thanks for this blog...for sharing your story, and being so encouraging. Love from Tennessee!
~Kim

I want to feel daring.

The button maker is AWESOME. I could tell from Instagram that you must have gotten one.

I think the hair idea is awesome! If you need good curly hair products (for days you don't want to straighten), I use Ouidad. They are water based and don't leave hair crunchy like typical gel.

I want to feel peaceful. Way too many issues going on in loved ones' lives...makes for lots of stress and sleepless nights. Peace of mind would be a wonderful thing.

I want to feel thankful!

I want to feel inner-peace.

I want to feel lighter!

I want to feel satisfied!

Joyful - I know Inge that from you choose joy. I'm working on that and to achieve that I will feel less stress (I hope).

I want to feel cured.

I want to feel "accomplished" this year; accomplished with all I am going to TEND to.

Love her hair and now it all makes sense!!!!

I feel badly not taking the time to comment yesterday! Not because you gave a reward, but just because I really wanted to guess what your words were for the pictures. Dang work got in the way! Anyway, if I picked a word for the year it would be motivated! I need to get motivated! Reading your blog helps. You are so inspiring!

I feel badly not taking the time to comment yesterday! Not because you gave a reward, but just because I really wanted to guess what your words were for the pictures. Dang work got in the way! Anyway, if I picked a word for the year it would be motivated! I need to get motivated! Reading your blog helps. You are so inspiring!

Content is what I want to feel this year!

I want to be AWARE.

Motivated is my word!

Good thing I went back and read the want to rather than just the feel! I want to feel together.

My word this year is Peace. I want to feel peace about so many things in my life along with learning to feel content with where I'm at. That itself brings peace.

Hi Mo ~ Of course Gabbi did not get the concept of a mean face because she is such an adoring, sweet, happy and loving girl who learned it all from Mommy & Daddy as did Ellie (but she is always so ahead of herself :)
My word is happy. I enjoy being happy.
Have a wonderful day,
Diana from Colorado

I want to feel productive!!! In my new Disney travel agent business and in my quest to have children

I commented yesterday, but thought I would participate in this one too!

I commented yesterday also but this year I want to feel "satisfied" that all is being done to find a cure for cancer, especially pediatric cancer

Adventurous! I want to have a year of adventure :)

Too many changes in various aspects of my life recently. I just want to feel "settled" and not have so many undone things going on. Ok, so that wasn't one word! But I had to explain!

First time poster. I have been following you since the Jake days. I lost my husband almost 18 months ago when we were in a motorcycle accident and just trying to get thru each day.

Love reading your blog, and I hope one day to make it to one of your retreats from the West Coast.

I want to feel peaceful.

I would like to feel "vitality". Thank you for your posts Melanie - they really do inspire me in so many ways!

I think I will choose...LIGHTENED! That could work in any number of ways. I really enjoy how all of you are together so often and to see how Mallison is like a big sister to the littles!

Hope you got my email. I finally chose peaceful. I think it's a great feeling to go with my Word of the Year : Health

I don't know where my comment about the Dian Keeton thing thing went, but my word is healthy.

I don't know where my comment about the Dian Keeton thing thing went, but my word is healthy.

ohh I want to change mine to happy I want to be happy all the time...