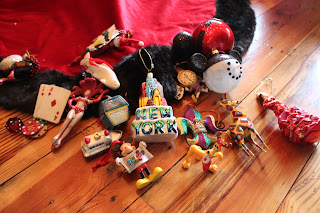 How ya doin?  Hanging in there?  Welllll, here we go again!  And this time I mean we are really GOING!  This is the travel collection! 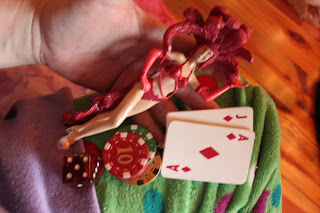 I wish I'd started this earlier in life, but I have started buying an ornament from each trip we go on.  Above,
we have Las Vegas represented. 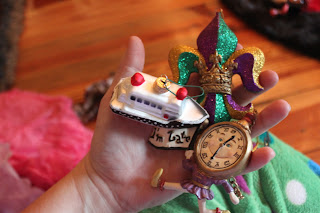 And then, there's a cruise ship (honeymoon), and two from New Orleans. 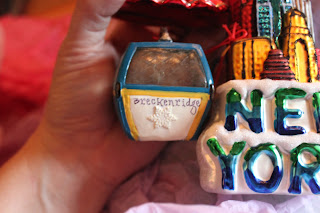 Here we have a gondola from Breckenridge and of course, my surprise 40th birthday trip to New York. 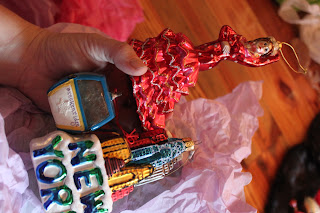 I went to Spain several years ago to work with a little girl with CP.  And, of course, we have an annual trip to Disney World to see the grands as well as Mickey and the princesses. 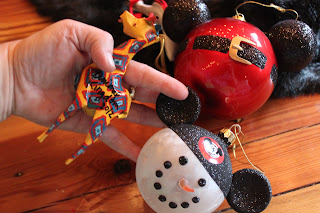 Oh, and Animal Kingdom.  I bought that giraffe there last year. 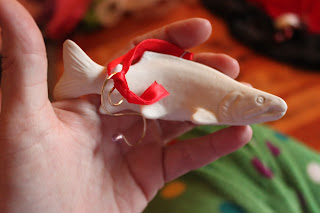 This trout is from Alaska.  I think it's a trout?  Maybe a salmon?  Maybe a shark?  Crap.  I have no idea.  I just know that my mom and I took a two week vacay to the northwest to Oregon, Seattle, and then onto Alaska when I was in my mid twenties.  "and all I got was this carp ornament".  Ha 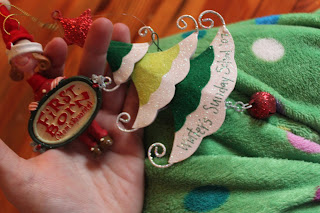 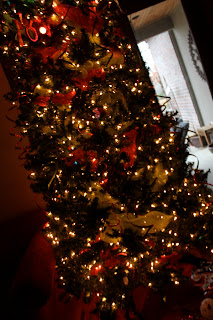 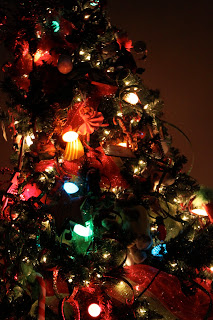 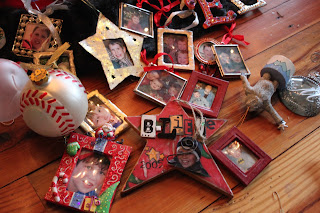 Hayden is my cutie pie.  He is the Justin Bieber look alike.  I mean, just see for yourself! 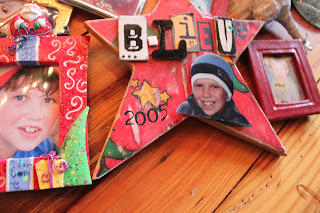 And when he was a little one, he was so dang cute!  The cutest of all the grands, I think. 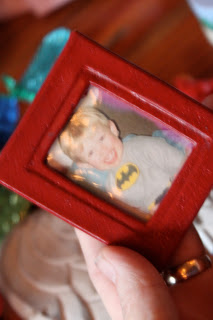 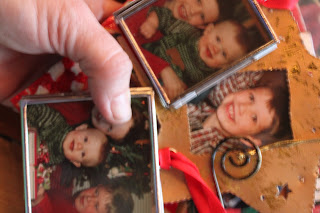 I have all kinds of ornaments with his pictures in them from all ages, starting around 1. 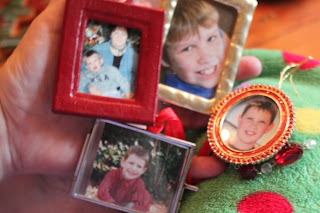 And I love these of the three boys in the Christmas before Jake's diagnosis.  Jake was 2 years old.  Well almost! 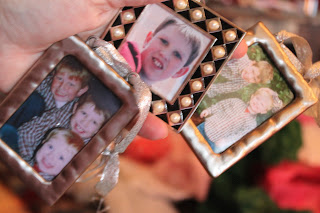 I love that I MADE/ FORCED/ COERCED the boys to paint ornaments with me in 2003.  Sweet keepsake. I'll have to save it for their kids someday. 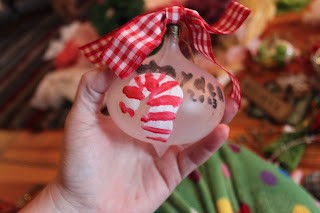 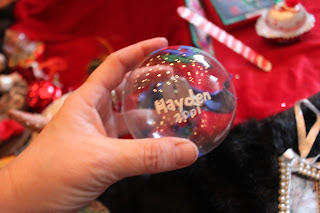 Speaking of Gabs, Mother Dearest walked in during my ornament clean up! Love that red silky dress and tiger patterned coat. 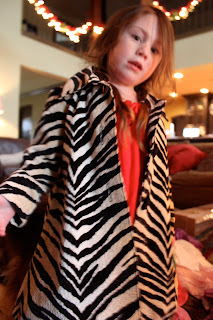 This is an extra from Gabbi's collection.  Princess Tiana was one of her favorites last year.  And I really love that Disney movie too. 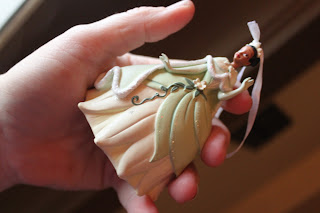 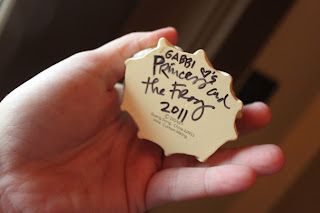 I have had these ornaments for several years also.  My favorite cousin, Cherry, had them made for me by a friend of hers in Olla.  They are lightbulbs which could be made into just about any character. 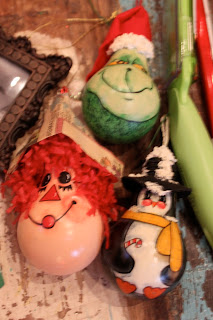 These are a few of my "fillers".
Cute, but can't recall exactly from where they came or from whom they were received. 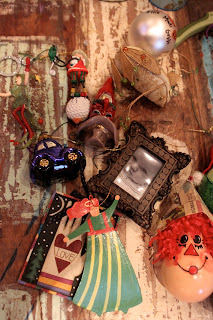 Although you can't read it, this says Ellie's first recital.  and has the date. 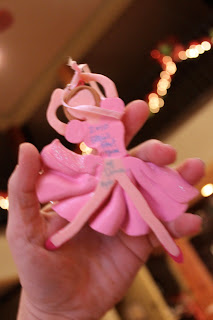 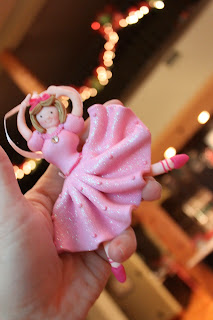 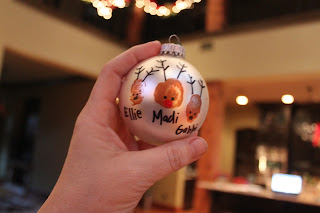 Check this out.  SOOOOO glad I had a back up plan.  I'll show you why over the weekend.  It is Ellie, Madi and Gabbi's thumbprints from last year.  And Ellie was pretty perturbed this year that Madi got to be Rudolph!  hahaha 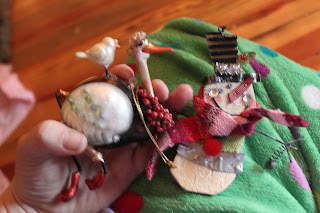 So where do you think we stand so far?  Do you have a pretty good guess?!  I am maybe halfway.  Naaaahhhh.  Maybe not half way yet.  But coming along.

Have a great weekend.
MO
Posted by melanie, aka Mo at 4:41 PM

love the ornaments - never did the sentimental ornament thing here. never made or got special ornaments each year for the kids either. they had their own trees with their own stuff on it till they got old enough to not want them put up anymore. had a super bad experience with an inlaw when i got married that ruined that whole "special" part of christmas for me lol lol we do keep all the things that are special to the kids - but never made a big deal out of it.

caitlin likes penguins and all the bright ornaments - we bought a "grinch" tree a few years ago from a craft store and started collecting her penguin stuff then. we don't even put every tree up every year. but caitlin has her stuff starting to gather when she moves out and starts her own traditions.

i have to say that the pics you have on your tree are my faves - how sweet to look back and have all those rememberies!!!

and i want to say that i am missing the canon photos! i am getting old and have to click on the pics to see them and some of them are blurry when you make them bigger - makes me think i am having a stroke lol lol lol

Actually, these ARE Canon photos. But I didn't use a flash. It ruined the ambience for me. Not sure why they're showing up small for you. Mo

I know my guess!!

Cori, how can you know your guess? I have lots and lots and lots more to show you. You just feel pretty secure in your answer, don't you!? We'll see! Mo

i thought they were iphone pics cause they were blurry when i enlarge them. hard to tell what is up with that!

Love seeing all the pics and learning about all of your ornaments!! Really like that you write on the back with dates and such.. Great idea!!