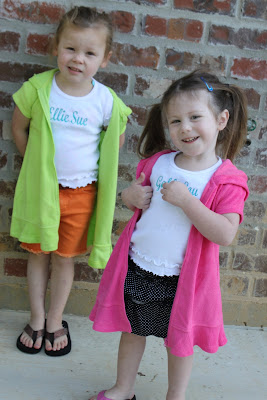 But we especially love Miss Donna when she announces it is going to swim day at daycare! 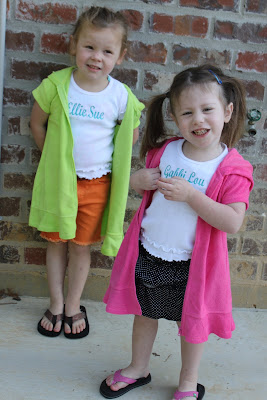 Somedays it is a struggle to get the girls to get up. Really, mostly just Ellie Sue. Gabbi typically pops right up. But then I have to struggle with Gabbi to get her out of the car and up to Miss Donna's house. She keeps saying, "Ona stay you." get that?! 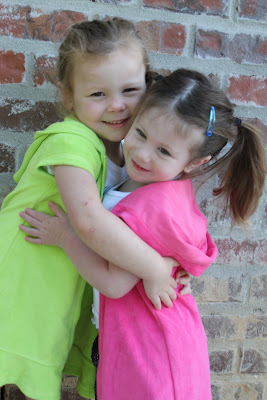 But on swim day, I let them put their bathing suits on under their clothes. Then, we had on shorts and tee shirts, and thennnn, Ellie insisted on cover ups. 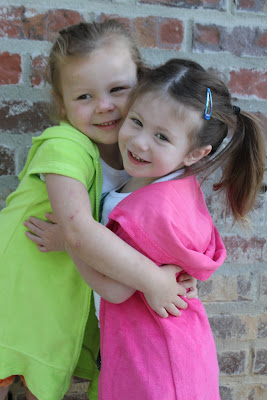 ANd in their bag, there were three pair of sunglasses ("one to share with Chloe"), two hats, and of course, their beach towels! 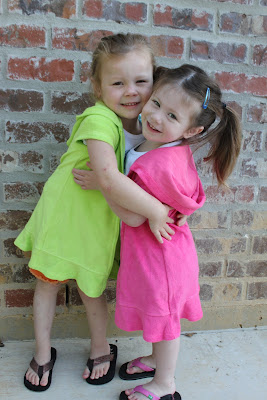 Gabbi is still having a time with keeping on flipflops. I found these pink ones in Key West (They're Sanuks!!), and thought they may be better. The heel straps aren't staying put with these either. Dang. She loves the idea of flip flops, but can't really keep them on.

We are looking forward to summer. We have beach plans, swimming probably daily when Mary Allison takes over babysitting duties for the summer (at our house), as we say goodbye to Miss Donna for a few months. I just thought I'd give them a break. And then, I have to decide on pre-K 4 vs. going back to Donna's. And do I separate them so Gabbi can stay with Donna while Ellie is at pre-K or do I send them both to a new place?! Oh, the decisions. Anybody got any advice on Pre-K? pro or con? Ellie is learning a lot at Donna's, just maybe not as intensely as she'd learn at a more structured daycare. She's a smart kid though, so I don't have much concern over her doing fine in kindergarten. (academically! I am still praying about behaviorally!! Ha!)

Here's my two cents...my son went to pre-school at 4 and 5 (his bday is Nov, so he started K at 6) We thought he would be burned out. However, he needed the structure! It was a pre-school at a church and it was AMAZING! I believe it really helped him. He's in 2nd grade now and doing amazing in the scholastic part. Of course behavior is always tough at first. He tests the boundaries! Whatever you decide for your girlies will work for you. Seperating them isn't always bad. Good luck in your decisions.

I would not worry about the academics that much. What does Ellie really need to know when she starts Kindergarten? I would suggest thinking about how she will do in the school situation. Will it benefit her to have a year to get use to getting up and going to a structured environment? Will it be too much of a challenge in she waits until K? (I always send my kids to preschool. I think they need the social part!)

I am jealous...it is warm where you are and there stalk of, dare I say, swimming??? Currently, here Ian the delightful PNW, it is 47 degrees and pouring rain. On the flip flop side (that is for Gabbi Lou in support of her desire to master walking said foot wear) I finished my first week of the DREAM job with a super slap happy smile n my face. My EMBRACE talisman is hanging on my wall in my office as a reminder of all that is possible. My favorite moment of the week was interfacing with my pediatric and adult radiation oncology teams. That might sound weird, but for me it is very empowering to be in a position to determine policy and procedure, best practices if you will, to make any moment in the lives of families facing cancer easier.

have a great week Mama Mo!

Mel, the girls went to NBS to pre-school through kindergarten and Seph went to Claiborne Christian. i can't say enough about either of their programs for pre-school. The social aspect is great with limits on behavior (but i assume they get that at Donna's) and the academics is great w/o too much pressure! that is my 2 cents. Lori

My two cents.... the structure of a pre-K program will be beneficial both academically as well as socially. There will be more children to 'get to know' and how to 'tolerate'. I think separating the girls is ok(leaving Gabby at daycare) but might be more work for you on the drop off. Either way the girls will thrive with parents like you and Todd!

Here's my thoughts. From observing the schools in our district, I see a HUGE benefit to the Pre-K program. Our students are tested for Dibels within the first 2 weeks of K. The numbers show that the pre-k kids do tremendously better than the non-pre-k kids.
That's just my 2 cents. It also gets them used to the school, the routine, etc, so that they aren't still in shock those first 2 weeks of K when the testing is occurring.

Mo, I have Bree enrolled in a Pre-k3 program now. It's more on a "preschool" level, complete w/homework assignments and report cards. She is doing quite well, both academically/emotionally (although on some rare days she just wanna be w/mom). My biggest quandry was...She will be moving up to the 4yr old program and I wasnt to happy with the teachers on that level. I was pondering "should I keep her there, since she is doing so well"? "Enroll her in a public pre-k4 program"? "Enroll her in a private, Catholic program (pretty pricey". Or move her to a program we have been on the waiting list since before she was 2!

I decided to check with "said school" to see where her name was on the "waiting list" and VOILA!! She starts Aug 22! She is pretty excited about "her new school" and I feel she is more than ready. See if you can "tour the school" and see how the teachers react w/the students and even bring Ellie with you. That can pretty much let her "get a glimpse" of a "school setting'! It will ease alot of anxiety on the first day as well. Good luck! You are a good momma, so I know you will do what's best for the girls!

This girls opinion: I sent my daughter to First Baptist West Monroe's WEE School for Pre-k. It was the most awesome experience for her and her mommy! We went on field trips (they allow siblings at all trips and parties) and she learned tons without the pressure of earning grades, etc. It is only three half days a week, so you don't have to just throw them in to an all day - every day type thing. It eased the transition greatly. Kindergarten in Ouachita Parish does pack in a lot of learning, and I think our pre-k gave her a great head start on the social and academic aspects. They also have a 3 year old program, so Gabbi could go too if you wanted.